Posted 30 May 2018 Interview by Arielle Bier

Scottish animator and filmmaker Will Anderson didn’t set out to be a film director. He studied animation at Edinburgh College of Art, and soon realised that masterful storytelling drives his work – a skill that deservedly earned him a BAFTA nomination this year: “I found myself in a film world telling stories through it. I love it.” Working together with his collaborator Ainslie Henderson, he has produced and directed live-action animations ranging from the Scotty Dogs on CBBC’s Own It website, to the duo’s first feature-length film combining documentary footage with animated characters. Will affirms the virtues of storytelling, the importance of having a supportive creative community and believing in yourself and your own ideas. 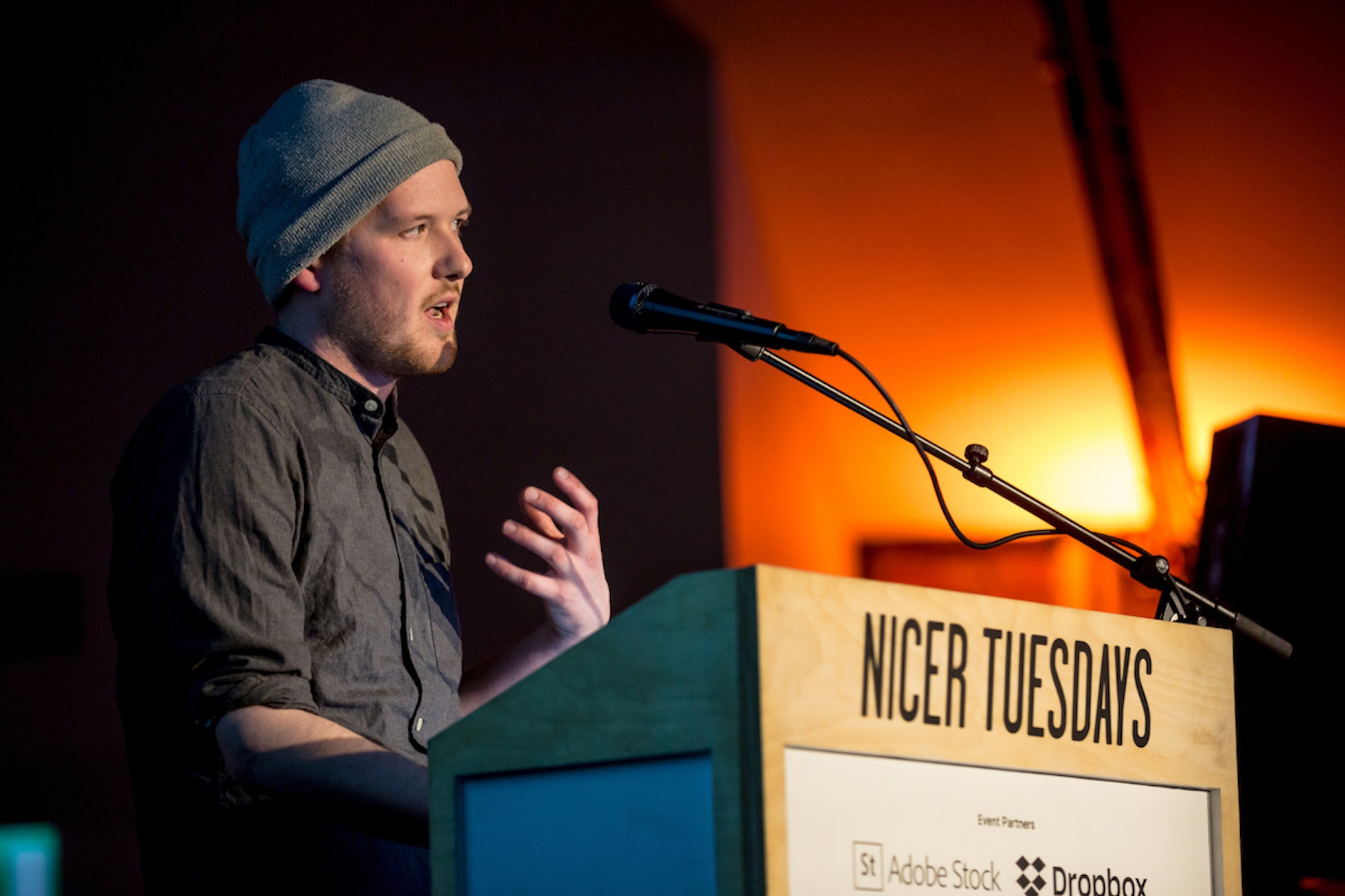 Will talking at Nicer Tuesdays

How would you describe what you do?
I work in various roles in the moving image industry, often on my own projects as I also write and direct my own films. I studied animation at art college, specialising in character animation using digital techniques. This gave me a good grounding in the principles of design, which is another role I work on a freelance basis. In addition to making my own short films, I am currently in production for my first feature film. Therefore, I’d describe myself as a designer, animator, writer and director.

What does a typical working day look like?
A lot of time is spent behind a computer. When I’m working for myself, I usually begin work between 10 to 10.30am and finish around 7pm. I have a studio at an arts venue called Summerhall in Edinburgh, where I live. As I spend a lot of time doing digital work on a computer, I try to make sure I go for regular walks to stretch my legs and rest my eyes.

What do you like about working in the part of the UK you’re based in?
Working in Edinburgh is great, particularly due to the arts venue where I’m based. My collaborator Ainslie Henderson and I work together producing and directing live-action and animated films. Scotland has a small but supportive film scene. Lots of my friends do similar work and we often help each other out, and sometimes even appear in each other’s work. Summerhall houses a wide range of artists and businesses, so this makes for a great working environment. It’s also affordable considering the space we have.

How does your project-based work usually come about?
I don’t get a lot of work through clients. At the moment we are busy with our own film work. That said, when we do, we most likely get work from people hearing about our films. I’m a firm believer in making work regularly, and if it is interesting someone will see it and enjoy it, and maybe some work will come out of it.

How collaborative is your work?
It’s collaborative in the small teams I work in. Again, I work closely with Ainslie, and we also work with sound artists, musicians and composers. I thrive on talking my ideas through with a small team.

“Scotland has a small but supportive film scene; my friends do similar work and we often help each other out.”

What has been the most exciting project of the last twelve months?
The most exciting project has been writing, improvising and producing short animated content for the BBC. We’ve been making animated talking Scotty Dogs for CBBC’s Own It website, and working with a producer to come up with meaningful and interesting ideas around online safety for children aged nine to twelve years old. We both write and direct, and then I animate them. 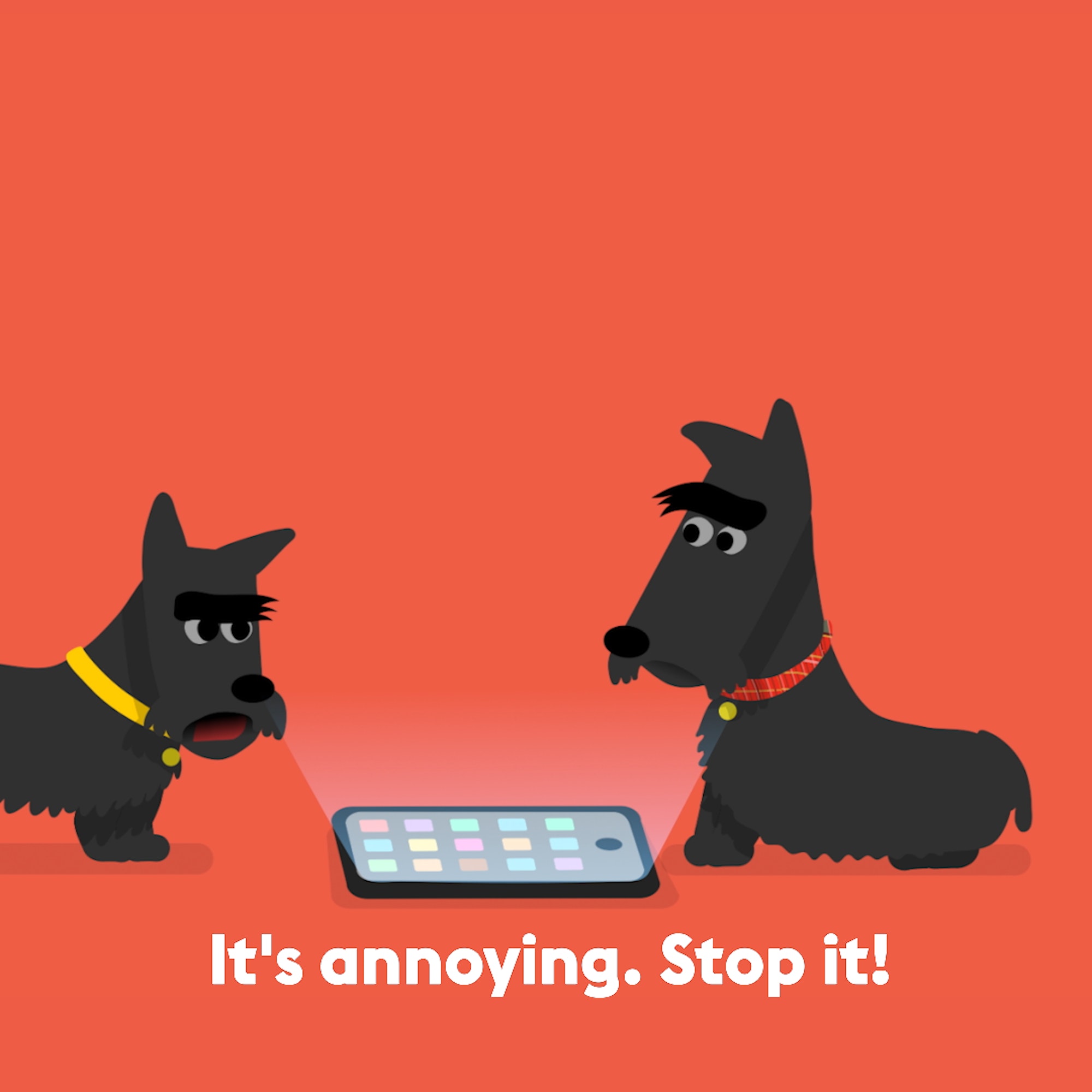 Animated talking Scotty Dogs for CBBC’s Own It website

What skills are essential to your job?
Digital animation. I make a lot of character animation, so it’s important to have great skills in digital design and general skills with editing software. Computer animation requires a lot of problem solving to make the shots work, which includes character rigging, animation and compositing. On top of that, I have to keep a keen eye on the story to ensure ideas are communicated effectively.

Are you currently working on any self-initiated projects?
I’m working with Ainslie Henderson and the Scottish Documentary Institute on our first documentary feature film, which merges real-life footage with an animated character. We’ve been working on it over the last four years whenever we can and are hoping to finish it early next year.

What tools do you use most for your work?
I do all my work on a MacBook Pro. I use software like the Adobe Creative Suite, Moho for some character animation and Cinema 4D for 3D elements.

Work for BBC Scotland, ‘The pigeons get stuck in Inverness’, 2016

What did you want to be growing up?
An animator!

What influence has your upbringing had on your choice of career?
I grew up in the Scotland Highlands with very supportive parents. They always encouraged making art and going for what I felt was right. I grew up in the countryside, which I loved, though it also made me ready to move to a city for something different.

How is the subject you studied useful to your current role?
It’s pretty much 100% what I studied – making films through creative means and storytelling.

What were your first jobs?
I haven’t had many jobs. I did a work placement at BBC Scotland straight out of art college and worked as a designer at ISO Design in Glasgow on a freelance basis for a few years. Working at ISO was very beneficial, as I mostly worked on my own and had control over my projects.

What skills have you learnt along the way?
To a certain extent, I’ve learned what does and doesn’t work, but that said, Animation is a life’s work – it’s movement!

What’s been your biggest challenge?
The most challenging thing is working through my own ideas and seeing them through, sometimes with minimal funding. This happened recently with my most recent short film Have Heart, which I made with a tiny team. The film was entirely self-funded and made in my spare time. It went down pretty well in festivals and was nominated for a BAFTA this year.

Is your job what you thought it would be?
I didn’t set out to be a film director, I thought I’d make animation, but as I learned that animation is about storytelling, I found myself in a film world telling stories through it. I love it.

What would you like to do next?
I’d like to be able to keep making creative work, be that film, illustration or perhaps games. As long as it’s story-led, I’m interested in it.

Could you do this job forever?
Yes, until my forever ends.

What do you feel is the natural career progression for someone in your current position?
Film is a tough one to succeed in and I have a long way to go, but what probably makes the most sense is making an independent project on a short-form idea that gets noticed, so I can get funding to make new work and work with new people, then eventually work on bigger projects like feature films or series.

“Film is a tough one to succeed in and I have a long way to go.”

Will talking at a recent Nicer Tuesdays event

What advice would you give an emerging creative wanting to become an animator or a filmmaker?
Be bold and believe in yourself. I used to think my ideas were stupid and not important. Your ideas are important because you are you. Let the world see them.

“Believe in yourself – you aren’t nearly as bad as you think you are”: Animator Katy Wang on overcoming self-doubt