Creative Lives — Working with everyone on everything: Warriors’ studio manager, Victoria Donnelly

Victoria Donnelly left Edinburgh College of Art with a BA in graphic design under her belt, a belief that there are no bad ideas and with some friends for life. Those friends (Beth Wilson and James Gilchrist) later turned to colleagues and now work as Warriors studio, with Victoria taking up the role of junior production assistant and then studio manager at the design agency straight after graduation. Being such a small team, the Warriors’ culture is one that thrives on collaborative crits and group discussions. But working with your friends comes at a cost, and for Victoria this often means falling victim to practical jokes on a regular basis. As well as managing Graphic Design Festival Scotland, the position has taken her out of her comfort zone and all the way to Texas, Austin where she recently led a workshop with design students. She tells us more about life in her first full-time job and her aspirations to teach in the future. 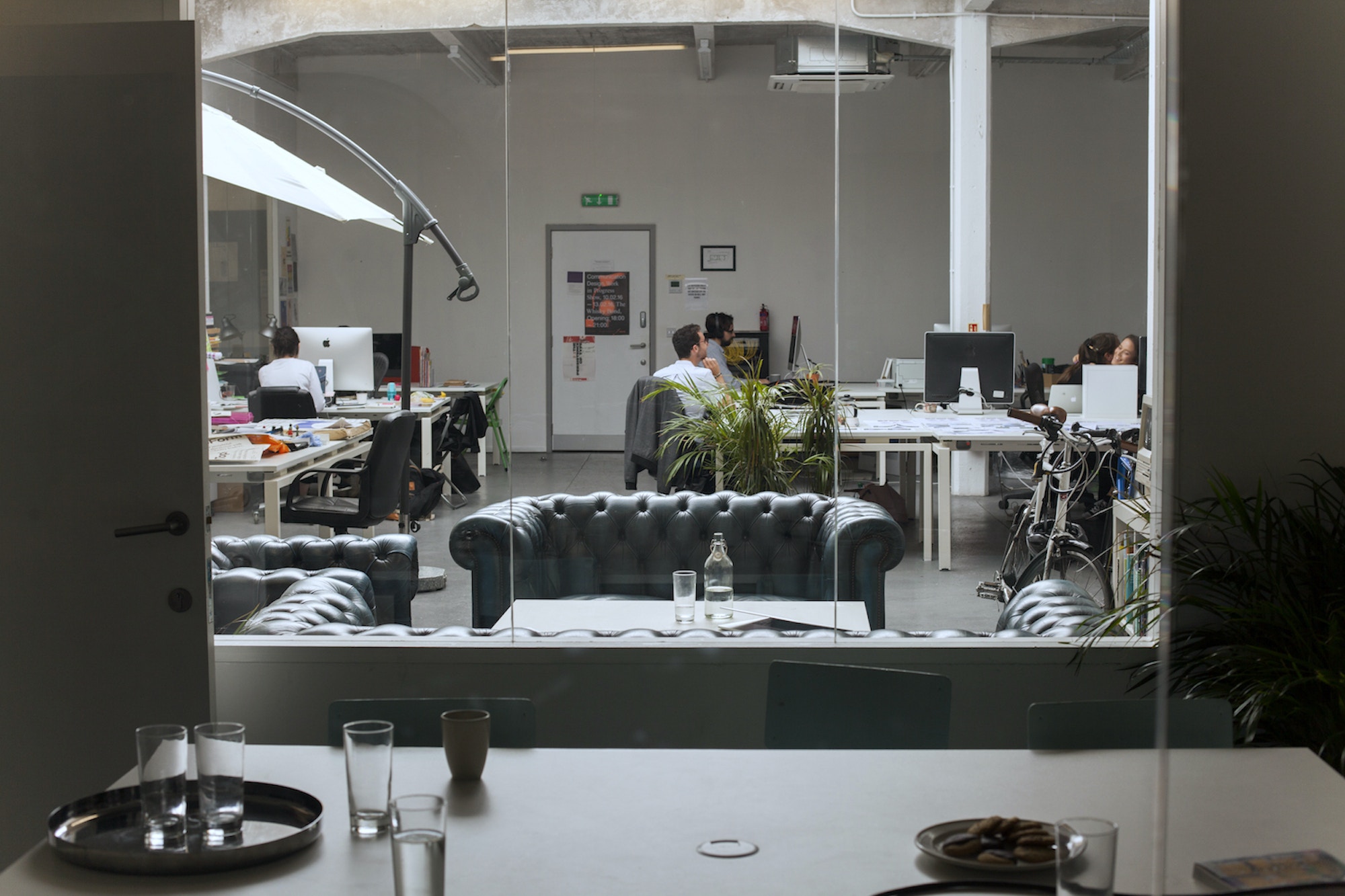 How would you describe your job?
My role is to manage the beast that is Graphic Design Festival Scotland. A large chunk of my job involves dealing with people. I talk to anyone and everyone whilst organising the festival, which means I’m slowly but surely perfecting my phone voice, which Beth often mocks. Other day-to-day tasks include: arranging travel and accommodation; managing several social media accounts and curating the programme whilst ensuring everything runs smoothly.

What does a typical working day look like?
Typical hours are from around 10am to 6pm but often change if we have out-of-studio meetings and visits. I live on the outskirts of Glasgow so the studio is about a 25 minute drive on a good day but can sometimes take over an hour if the traffic’s bad. An average day involves lots of tea, emails, phone calls and meetings as well as working closely with Beth and James on various projects and tasks throughout the day. The eight hour days and free weekends allow a healthy work-life balance. I think it’s important to have that time after work to switch off and dedicate time to loved ones.

How did you land your current job?
I’ve been pals with Beth and James since I first met them at ECA. I helped them out with the festival as much as I could whilst studying to get my degree. After I graduated I was able to officially become their colleague and manage the festival full-time. 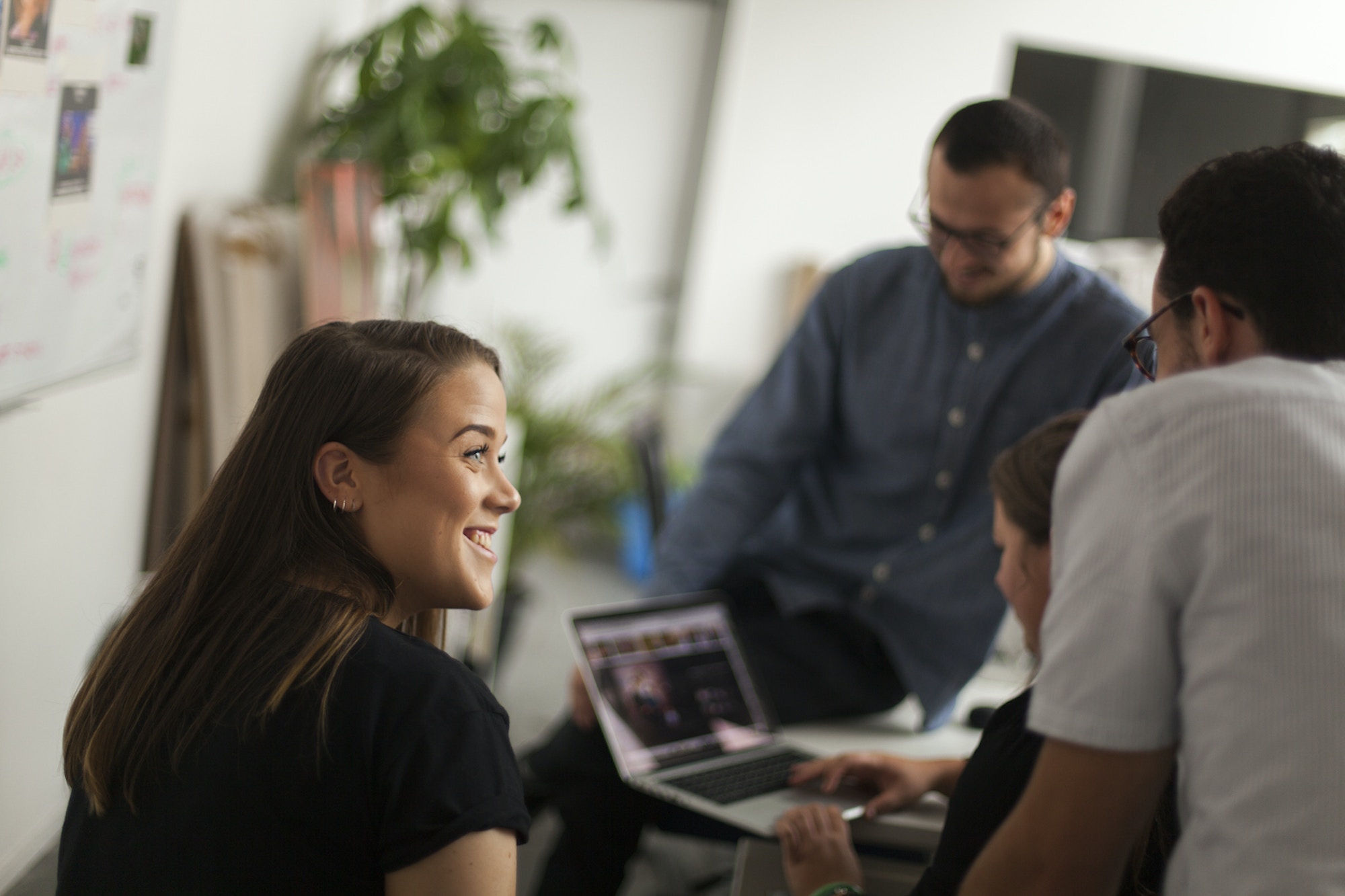 Where does the majority of your work take place?
Half in the studio and half at home. On Monday and Friday we all work from home. My dad also works from home so it’s nice to have a chat and a cup to tea with him whilst working from the couch.

How collaborative is your role?
I work with everyone on everything. If I’m at home, there’s a 90% chance I’m discussing something with Beth and James on Skype or Facebook messenger. When we’re in the studio we often do collective crits and discussions.

What are the most and least enjoyable aspects of your job?
Unfortunately most of my tasks require internet and a screen so the least enjoyable part of my role is probably the constant square eyes. I usually spend about 8 to 10 hours a day in front of the computer which sounds pretty scary now that I think about it. I love the fast-paced nature of working in a small agency. You don’t have tiers of people to go through to confirm a decision – communication is instant.

What has been the most exciting project of the last twelve months?
Working with Warriors has opened several exciting opportunities for me. A particular highlight was being invited to host a workshop for design students at The University of Texas in Austin. I had never stepped outside Europe before and having the chance to meet and collaborate with amazing creatives 5000 miles away from home was crazy.

“Working with your pals is great and working on a project you’re passionate about is even better.”

What skills are essential to your job?
Organisation, communication and multi-tasking. I can be juggling a variety of tasks simultaneously so it’s important to keep a good balance and a cool head.

Do you run any side projects alongside your job?
Right now, festival planning is too crazy for me to add additional self-initiated work. Maybe I can start to develop potential side projects once the madness has died down.

What tools do you use most for your work?
Apple Mac; Facebook messenger (so I can keep up to date with the Warriors crew); Google docs (so we can share what we’re working on); Calendar app; Gmail and all the usual social media apps: Instagram, Twitter and Facebook. 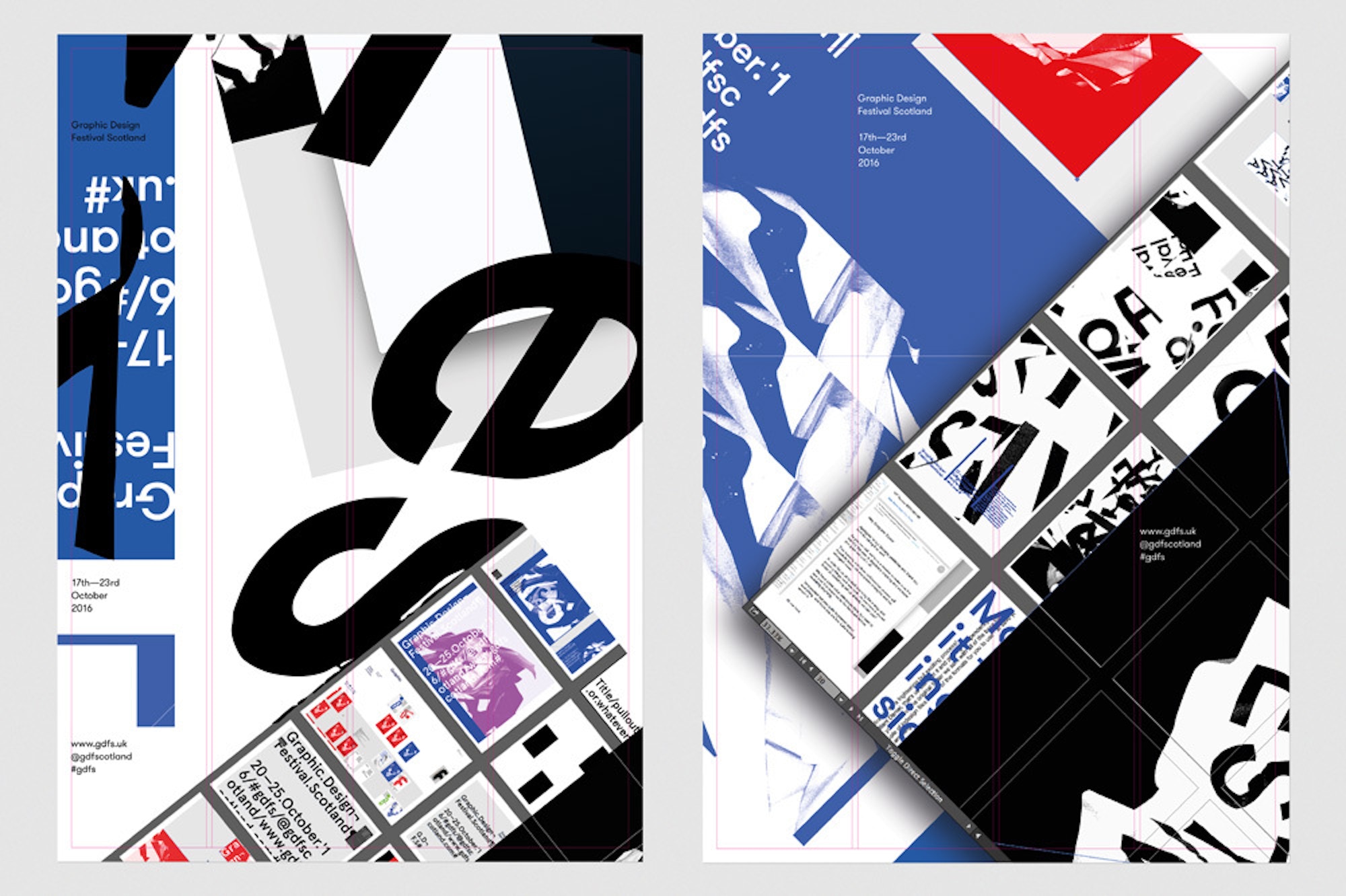 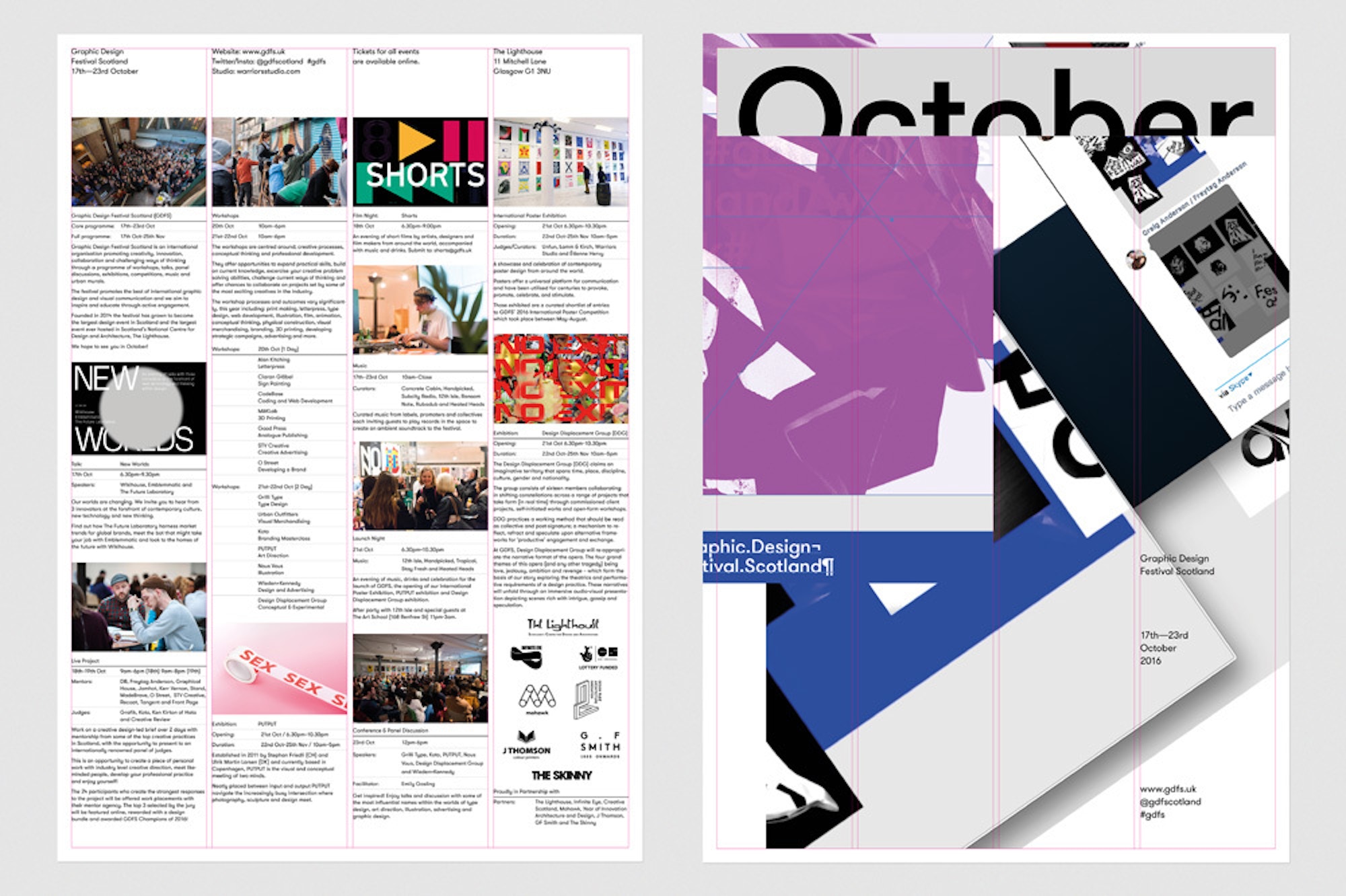 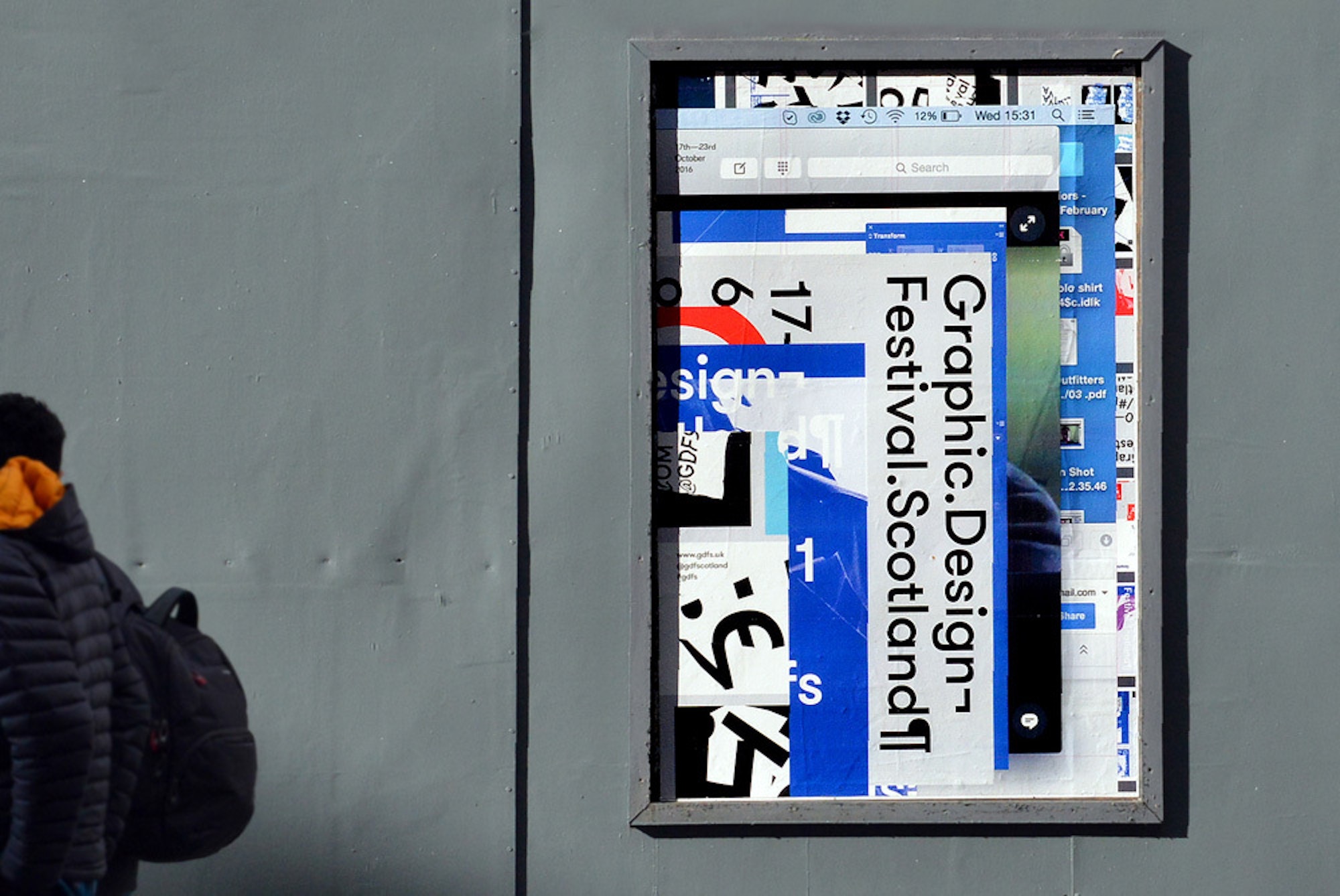 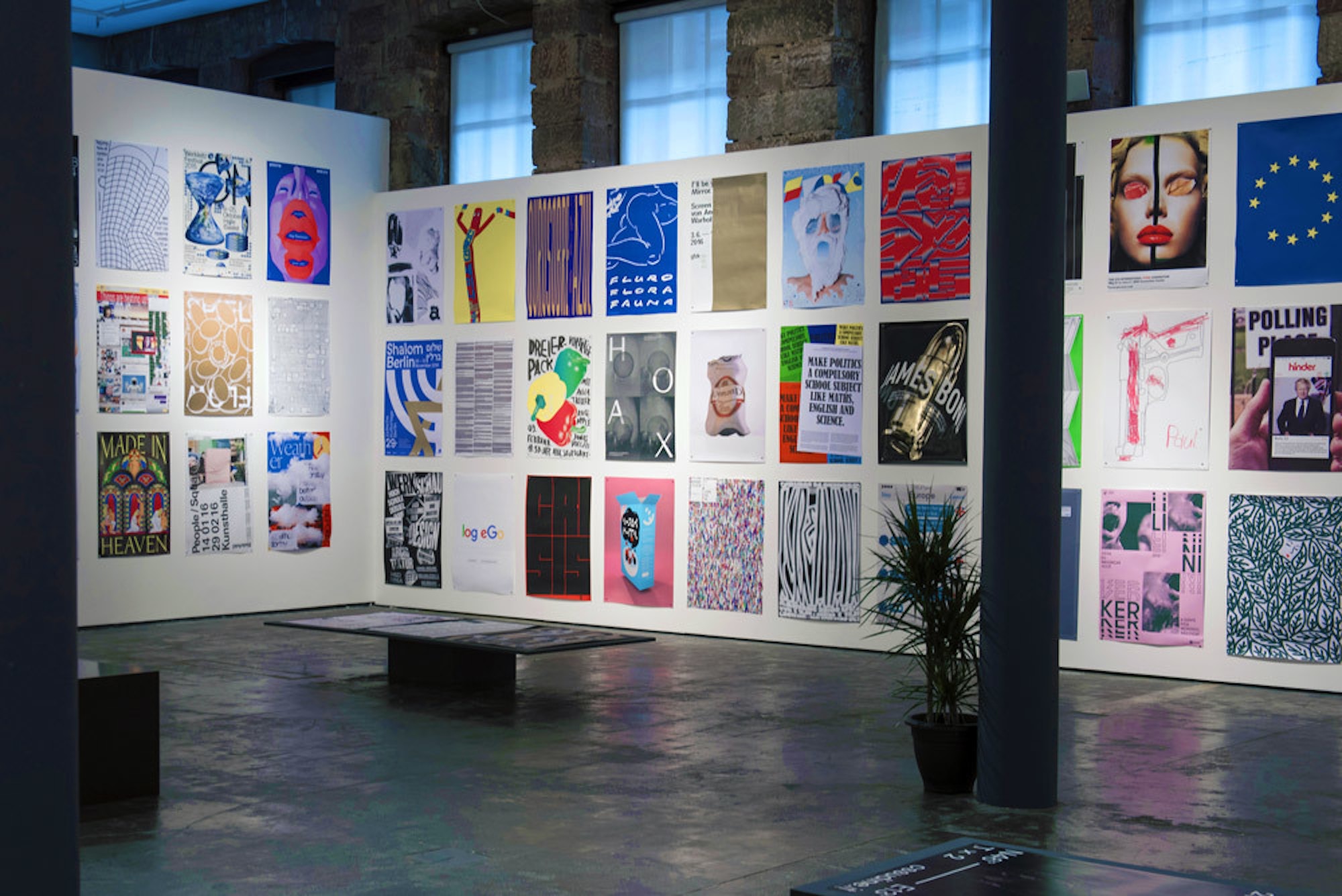 What did you want to be growing up?
An interior designer. Ever since I can remember I would ask everyone and anyone If I could draw them their dream room. I’d have folders full of my drawings of various rooms and houses.

What influence has your background had on your work?
I have always been creating and designing from a young age. My Mum and Dad claim they don’t have a creative bone in their body and have no idea where I get it from. As I got older I became obsessed with photography. School nights and weekends were dedicated to “photo shoots” with friends. I remember persuading my friend to change outfits in the car and getting her to pose in an abandoned trolley in the middle of a skate park. I loved the process of art directing, shooting, editing and publishing my work. Even though I haven’t picked up a camera in a while, I still carry the same passion for creating today.

How (if at all) is the subject you studied useful to your current role?
Studying graphic design pushed me out my comfort zone. It taught me to think beyond the boundaries and that no idea is a bad idea – all of which I carry into my current role at Warriors. Additionally, I feel that the most important part of my time at ECA is the amazing people I studied with. I met friends for life – including Beth and James.

What were your first jobs?
I have never done an internship – not because I didn’t want to, but because I was lucky enough to know Beth and James who offered me a job straight out of art school (thanks guys). During my studies, I worked weekends in Urban Outfitters in Glasgow where I was surrounded by creative colleagues. I worked alongside sculptors, animators, film makers and a few other graphic design students too; lunch breaks were never boring.

What in particular helped you the most at the start of your career?
My first couple of weeks at art school were terrifying. I was in a new city; surrounded by new faces; in a completely new environment and it was daunting. I seriously contemplated dropping out after a few days, but my boyfriend pushed me to stick at it and I’m so glad I did.

Was there a particular project you worked on that helped your development?
As a fairly recent graduate, I still find working on projects that are outside of the comforting art school bubble quite scary. I can’t pinpoint a specific project that helped my development. I feel as though I learn and grow from every project I do or I’m involved in. Every day is a school day at Warriors. 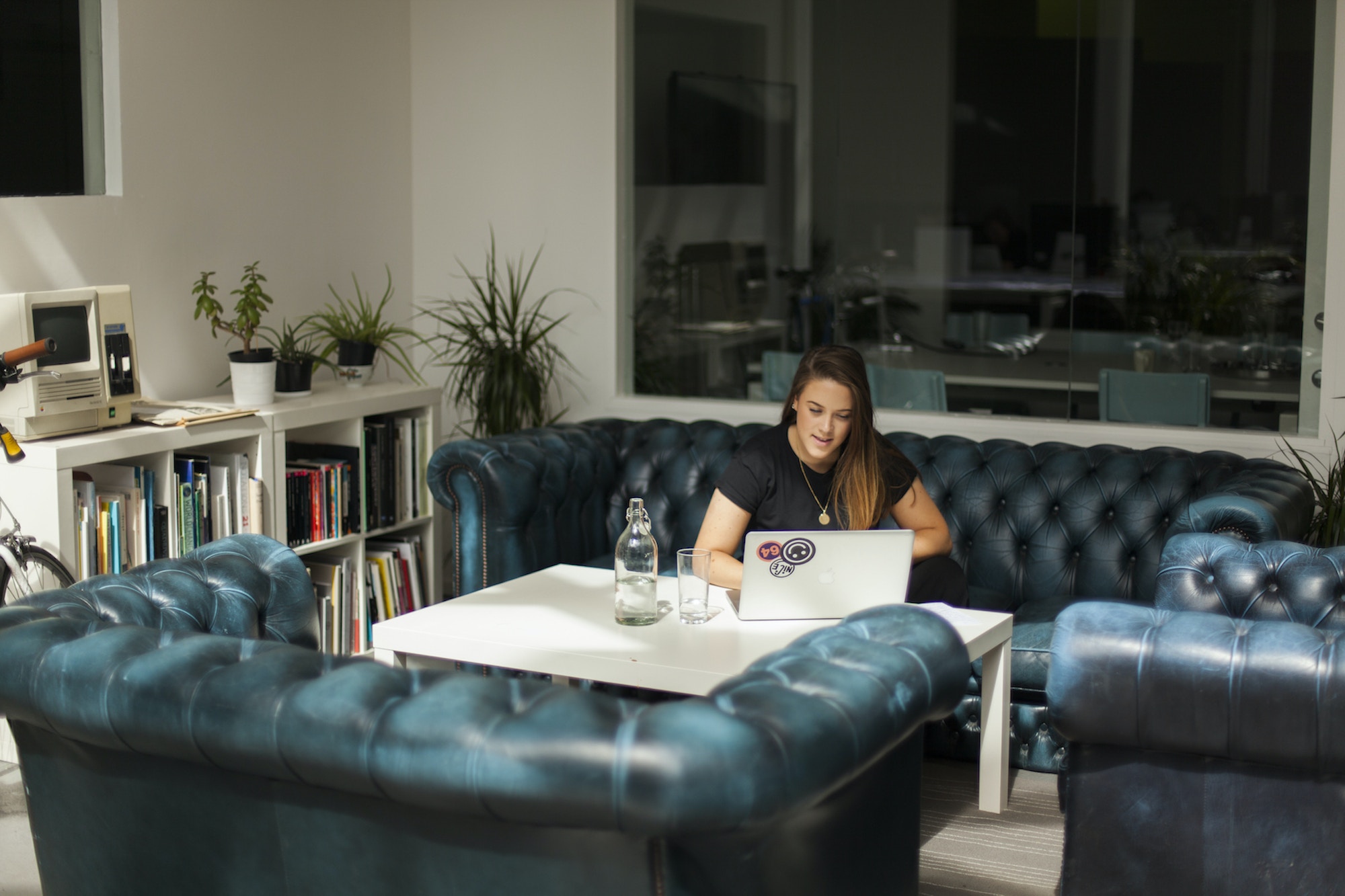 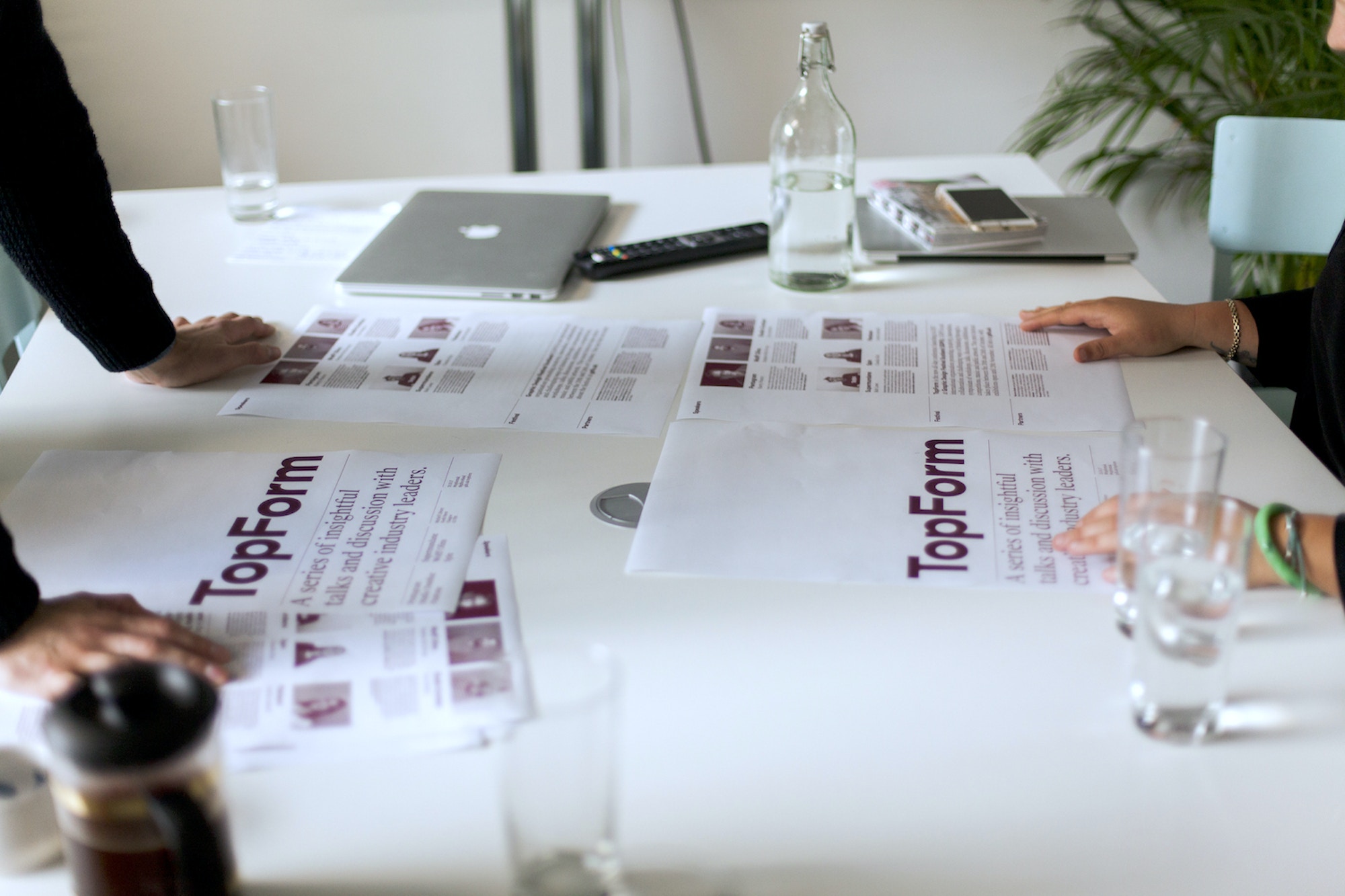 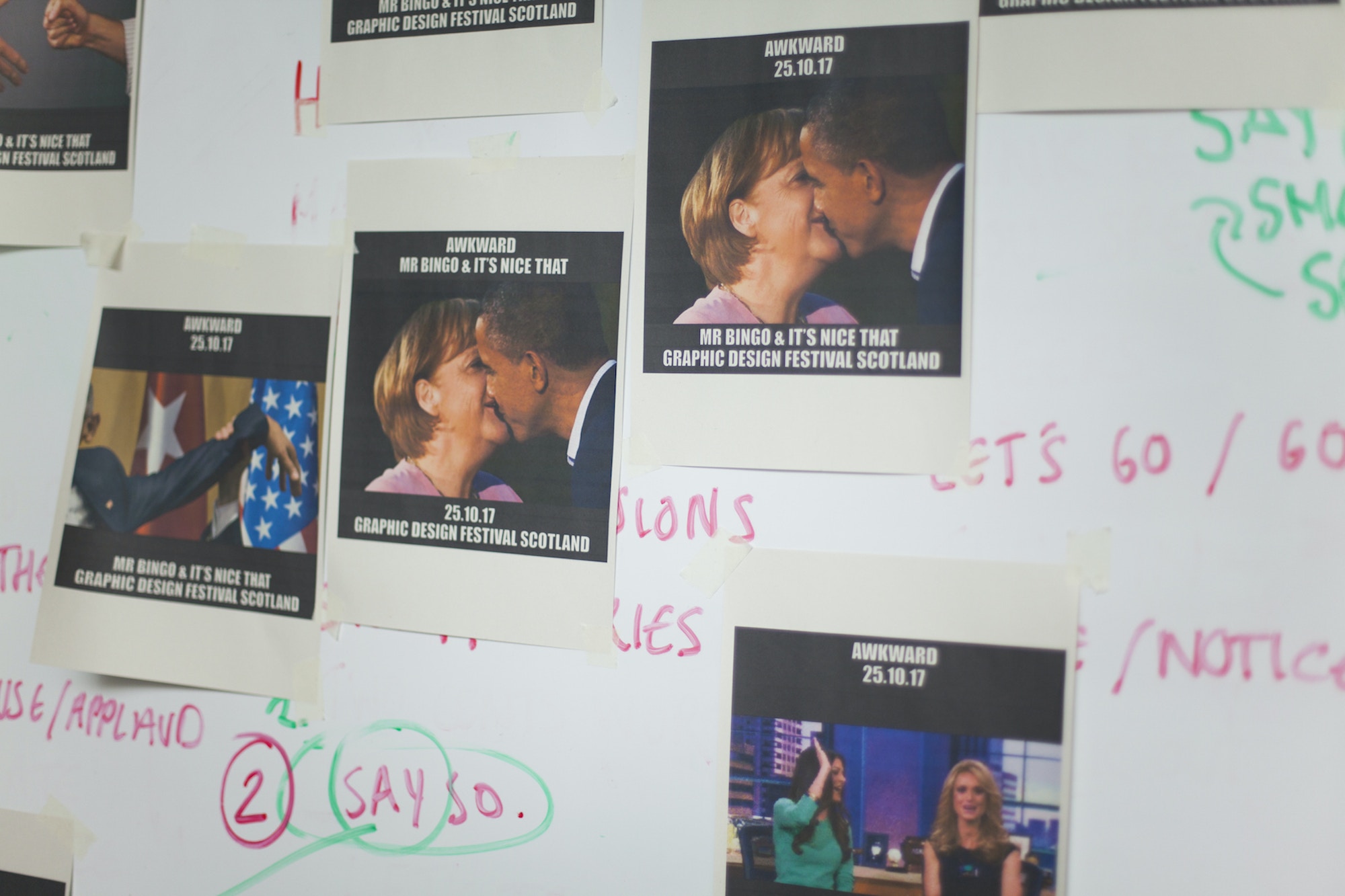 What skills have you learnt along the way?
I’ve built confidence and improved my communication skills. There are also some things that I’ve had to learn the hard way, like never giving a client the same password for everything including email and bank accounts. Oh, and to change passwords regularly.

What’s been your biggest challenge?
Being gullible. To this day, I still fall for Beth and James’ practical jokes. They once told me I had to drive a bus from Edinburgh to Glasgow and back to transport ECA students to and from the festival. I panicked as I’m not a confident driver at the best of times, never mind being responsible for a 40-foot vehicle and over 50 students. This was just one of many wind-ups and I’m sure there will be a lot more in the future.

Is your job what you thought it would be?
Pretty much. Working with your pals is great and working on a project you’re passionate about is even better.

“Make the most of the people around you. Whether you’re at school, college, university or in a job already, it’s so important to make connections everywhere you go.” 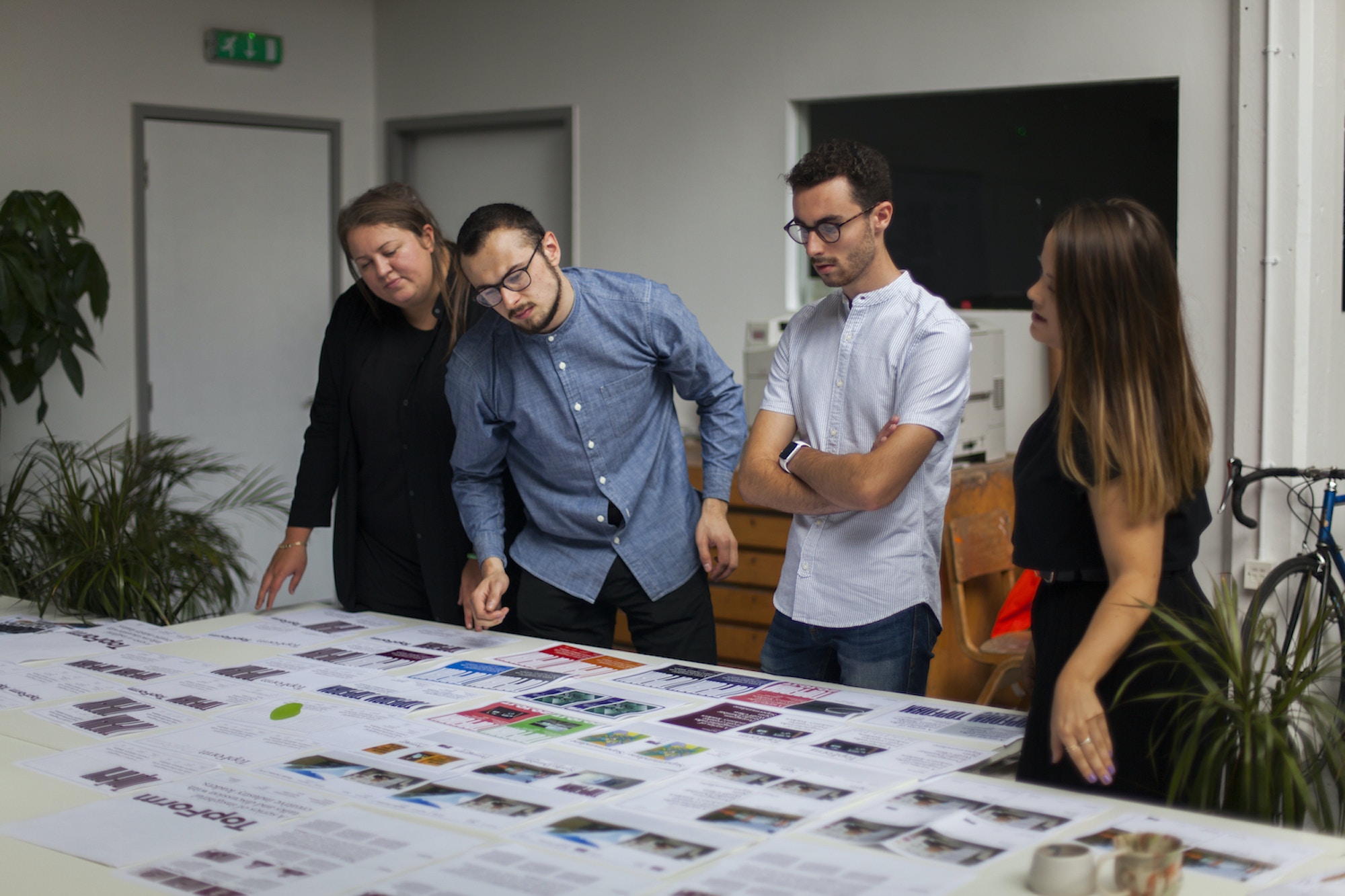 What would you like to do next?
I would like to eventually teach art and design in school. My biggest inspiration throughout my secondary education was my art teacher, Mr. McAvoy. He motivated me to work hard so I could achieve my dream of getting into art school. I invited him to my degree show last year which was quite emotional considering the last time I seen him I was a teenager, with no idea of what the future would bring. My goal is to inspire and teach future creatives and have a positive impact on people’s lives like Mr. McAvoy had on mine.

Could you do this job forever?
I could. However, I feel as though my skills would be put to much better use in a school and teaching the future generation of creatives.

What do you feel is the natural career progression for someone in your current position?
No idea. A great thing about the creative industry is that there are so many paths you can follow and ways you can progress. A progressive step as a junior project manager would be working towards making GDFS the biggest design event in the world and putting Glasgow on the map.

What advice would you give to a young creative wanting to become a studio manager in a small production studio?
It sounds like a cliché but I still stand by the saying: “It’s not what you know, it’s who you know.” My biggest advice to anyone is to make the most of the people around you. Whether you’re at school, college, university or in a job already, it’s so important to make connections everywhere you go. In my final year of uni, my friend Michelle and I set up an event to encourage different disciplines from the art school to come together for an evening and chat over a few beers. We thought it was vital to meet as many people whilst in education before we were thrown into the big bad world. I don’t think I would be in my position if I hadn’t stepped up and spoke to Beth and James about helping them with the festival. Say hello and be nice to everyone – you never know when you’ll need them.

This interview is part of a feature on Warriors Studio.