Bournemouth Arts Institute-trained director Tomas Leach got his first big break securing a place at Benetton’s creative research hotbed Fabrica. He’s created emotionally resonant, people-centric films and commercials for the likes of IBM, BMW and Adidas – capturing the intimate passions of top eco chefs to footballers Steve Gerrard and Raul. His debut documentary In No Great Hurry, which was released in 2013, explores the life and work of pioneering New York photographer Saul Leiter, a reluctant icon that it took Leach three years to woo. His next film, The Lure, follows a madcap scheme by art dealer and eccentric millionaire Forrest Fenn to hide a bounty somewhere in the Rocky Mountains and the treasure hunters that seek it. 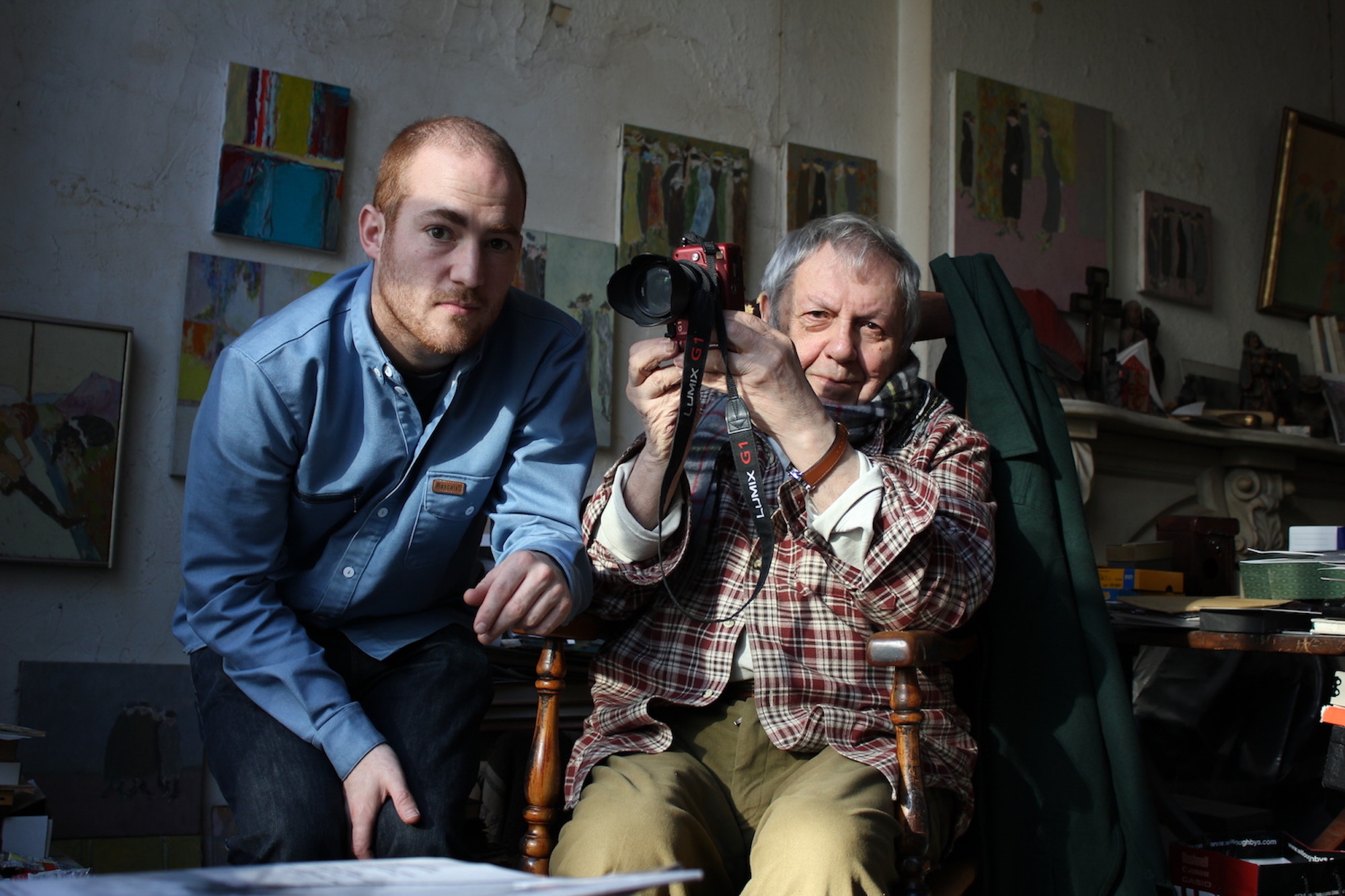 How would you describe what you do?
I direct commercials and feature films. At the moment, the feature films have been documentaries, but that may change in the future. For my own projects, I’ll develop the idea and take it through a long process until it’s a finished film and beyond. That goes from daydreaming an idea, to getting people involved, raising money, shooting it, editing it, the post-production and then releasing it and doing press. It’s an ever-evolving and intense process. For commercials, I’ll come on when an advertising agency has an idea that they want brought to life. I’ll give them my interpretation as a pitch and then make it real if that’s the approach they life.

What does a typical working day look like?
That varies wildly, and it’s sometimes hard to keep a routine. If I’m on a shoot, I’ll be awake very early and the day will be intense both physically and mentally. It’s a thousand moving parts combining to get things on screen. During an edit or post-production, I’m in a dark room and it’s more cerebral or discursive. Days when I’m not in production, I try to spend writing and developing ideas. But that often spills into having meetings, getting boring admin done and avoiding work altogether to sit in a cinema. I try and save days for just thinking and reading. Sometimes too much production means you don’t get a chance to check in with what you think and want to do.

Where does the majority of your work take place?
All over the place is the only honest answer. I spend about six months of the year travelling. Some is for writing and research (a vital process), some might be shooting and finally editing and post-production, which tends to be done in London or New York. In between these projects, I’ll work from home, in my production company’s office, or in a cafe. I spend too much time absent-mindedly on a computer and try and block time every day to read, walk and think.

How do projects usually come about?
I’m represented for commercials in the UK and US by Moxie Pictures and in a few other countries by other production companies. All my commercial work goes through one of them. But I’m not employed by them as such. It’s more of a mutually beneficial agreement. For long films, each one is different. There may be multiple production companies and I’ll be under contract for that film only.

“You need to be able to communicate what you want to do. If you can’t do that, you’re screwed.”

How collaborative is your work?
Film is an intensely collaborative medium. None of the things I’ve made would have been possible without input from lots of collaborators. There are a small group of editors and directors of photograph (DPs) who I work often and I work closely with a producer to help make the film come to life. Each of them come on at a different stage of the project. My producers help me choose the right projects and assemble all the pieces needed to make it happen. The DPs take some of my ideas and realise them visually, and the editors will shape and re-work the story and filmic language. It’s vital to have co-conspirators. People who do similar things who you can confide in, complain with and seek inspiration from.

What are the most and least enjoyable aspects of your job?
I love the work I do pretty much all the time. The hardest part is that you lose pitches and you get rejections (for festivals, scripts, ideas…) a lot. Building up resilience to that takes time.

What has been the most exciting project of the last twelve months?
Releasing my new film ‘The Lure’ is really exciting. The Lure is about a treasure hunt in the Rocky Mountains. Here’s the synopsis:

“Forrest Fenn sits in his museum-like home plotting another clue in his $3 million treasure hunt. The search for the gold he hid in 2010 is spiralling out of control. The Lure weaves an ensemble of hunters as they match wits against Fenn. Each driven by their own search for something more than just riches, turning this quixotic quest into an act of redemption. But is the treasure real, or just a hoax?” It’s been executive produced by Errol Morris and has a soundtrack by Calexico. So far people are really loving it.

What skills are essential to your job?
You need to have something you want to express, a visual language and a sense of storytelling. That’s your inner guide to whatever you do. As for explicit skills, you need to know how to work with a huge variety of different personalities. You need to be able to communicate what you want to do. If you can’t do that, you’re screwed.

What tools do you use most for your work?
All the usual bits like an iMac, Macbook Air and iPad and a phone. Whenever I’m editing I use a Wacom tablet and I have a Sony A7 for taking stills whilst I scout, work or research. Most of the main hardware for making my films has never been mine though. We hire cameras, lenses, grip equipment, lighting…everything. And that continues through post production.

In terms of software, everything I use is about how to best present an idea, either as a treatment on a commercial job, a screenplay for a film, or ideas on how something should look for my DoP or colourist. The day I learnt how to use InDesign (and pretty basically at that) changed my life. It allowed me to make things that looked great as presentations themselves and not struggle to make Photoshop work for me. I don’t think there’s much excuse for having a badly designed, or text-only document when you’re talking about film. It’s a visual medium. I also like to test out ideas in an edit myself, so I use Avid at home quite a lot to assemble some scenes, or play with ideas. Aside from that I always have an A5 Moleskine on me and at least three Pilot G-tec .4 pens. I find writing by hand really important for working out ideas.

What did you want to be growing up?
I thought at first I’d be a war photographer. Then I started to love cinema. I watched as much as I could, worked in a cinema and became hugely passionate about filmmaking.

How (if at all) is the subject you studied useful to your current role?
It’s directly relevant, but the teaching was awful. What was great was meeting other people who wanted to do the same work as I did.

What were your first jobs?
From the start, I decided that being an unemployed director was more useful than being a well employed runner. So I was broke for quite a while, but developing ideas and trying to make things.

“You learn much more from finished work that is shit than from perfect work that never gets seen by anyone.”

Was there anything in particular that helped you at the start of your career?
Making my first short docs and using that reel to get me into Fabrica (Benetton’s creative lab in Italy). That gave me the space and time to work on my own projects and not rack up enormous debt.

Was there an early project you worked on that helped your development?
At college I made a short film that won some prize money, which I could then spend making my first documentary. At Fabrica, I made a short called The Glass Eye Maker, which really honed how I think documentaries can be shot. We shot it on 16mm and it got over a million views, was sold to TV and got me some good meetings. The BMW commercials I made were my first really exciting commercial project and opened up a new way of thinking. Making the series Little Scraps was very liberating creatively when I had got a bit stuck on commercials. But beyond everything, finishing my self-made first feature In No Great Hurry gave me a real focus and legitimacy.

What skills have you learnt along the way?
I’m always learning, and everything I make is a part of that process. There’s no end to that…

What would you like to do next?
I’ve just released my second feature documentary and I’d really like to make some narrative work in the near future. I’m writing and developing both documentary and narrative feature films, so we’ll see what happens.

Could you do this job forever?
I don’t really see it as a job, it’s much more entwined in me than that. Filmmaking is very much part of who I am – so yeah.

What is the natural career progression for someone in your current role?
Directors take many different paths and create pretty varied bodies of work. It’s not so much progression as being allowed to make more work and constantly honing your craft.

What advice or recommendations would you give to a young creative wanting to become a director?
Watch films a lot. Talk about films a lot. Find people who have similar ideas as you and make a lot. You learn much more from finished work that is shit than from perfect work that never gets seen by anyone. Be kind and supportive to others along the way. It’s the easiest and most effective way of gaining supporters and it’s essential to not being a twat.

MTV production manager Marko Domazet: “Don’t be afraid to ask for help; you’re not meant to know it all”

Director Kibwe Tavares on his filmmaking journey, from learning on the fly to financing

A day in the life of Lorna Dannielle Dumba, senior VFX producer and head of production

How filmmaker Elliott Arndt made the most of his network, and Facebook, to create his latest music video for City Slang

Why visibility and representation matter: Vanessa Whyte on co-founding a platform for female cinematographers