First Hand — What are the benefits of a four-day working week?

The four-day working week: In theory, it’s a work-life balance dream, where passion projects get the time they deserve, a healthy level of rest takes priority and productivity levels reach new highs. But is this vision destined to remain a fantasy? While researching our latest Insight Report, few topics were as persistent or hotly debated as this shift in working hours. Here, we explore the pros, cons and practicalities of this radical change and speak to one of its most ardent supporters, campaigner Aidan Harper, and to Ellen Rhodes, the operations manager at graphic design studio Normally – one London firm giving it a go.

The allure of a shorter week
The appeal of the four-day week for workers is clear: a day a week less in the office for the same amount of pay. But for employers, it’s less straightforward. There have been a handful of high-profile success stories: Australian marketing agency Versa reported a 46% uptick in revenue after giving all employees Wednesdays off, while New Zealand’s estate management company Perpetual Guardian was part of a study by Auckland University of Technology that found its productivity remained similar even after losing a day, but sick days dramatically decreased. On the other hand, many US start-ups that made the switch have gone back to five days, following a drop in profits or increased stress.

Complex in practice
One of the most high profile U-turns has been that of London-based scientific research foundation The Wellcome Trust. In January it revealed that it was considering switching its 800 head office staff down to four days (which would have made it the largest UK employer to do so). But just three months later in April, it announced that it had scrapped the plans, stating that it would be “too operationally complex to implement”. There were concerns about the stress of condensing five days of work into four, as well as the implications on public-facing roles. The trial run, planned for autumn, was also cancelled.

A cause worth fighting for?
Despite this, the four-day week is a cause that refuses to die down – even Labour shadow chancellor John McDonnell has commissioned research into the benefits of a four-day week country-wide. To unpick the philosophy and the practicalities of this radical change, below we share our conversations with campaigner Aidan Harper and Ellen Rhodes. 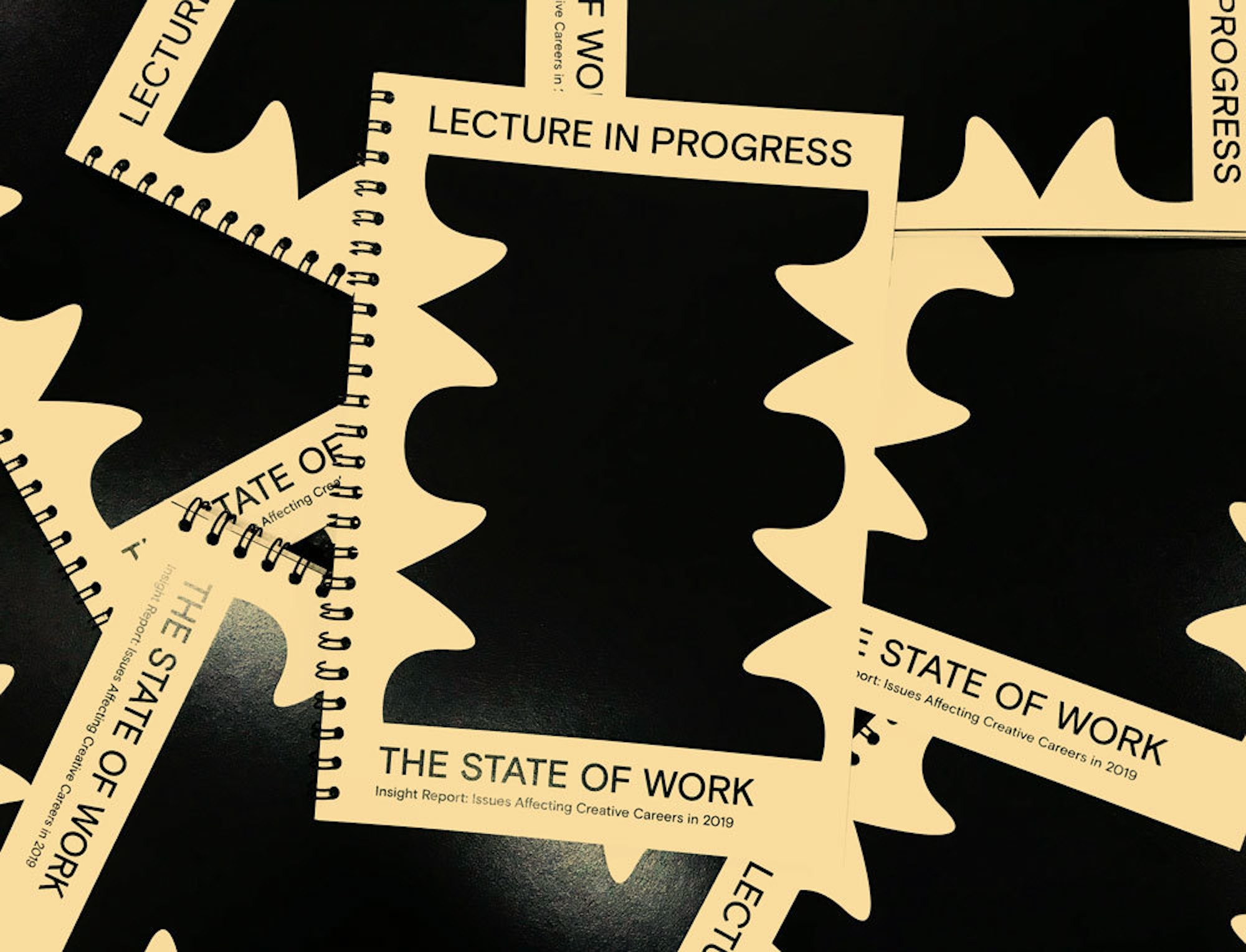 Our latest Insight Report, available for Members to download from the Members Area of the site

Aiden Harper: Our model of working time is outdated

Aidan Harper is a researcher at the New Economics Foundation and heads up the 4 Day Week campaign. It champions a reduction in working time to encourage better mental health, a fairer society and a more environmentally sustainable economy.

What benefits do you think a four-day week could have on the creative industries?
In terms of wellbeing and mental, these could improve markedly. Within the UK last year, the Health and Safety Executive – the government’s statistic collecting body for work-related illnesses – found that of all sick days lost in the UK last year, one in four of them was a direct result of overwork. We individualise these issues rather than seeing them as a structural problem that we need to change collectively.

Our model of working time is outdated. There is nothing natural or inevitable about the number of hours we spend in work. The absence of statistics only really address people that can’t even be present in the workplace, because their mental health has deteriorated to an extent that they stay home or go to the doctor.

There’s lots of data to show that quality of life deteriorates rapidly as you become more tired and stressed. A creative mind needs to be well-rested, have space to breathe, to experience other things. It needs periods of thinking, imagining, reading fiction or doing sport. Living and experiencing a fuller life feeds a higher quality of work and creates happier workers.

Why do you think there’s so much resistance to the idea?
There’s often a reaction against anything new. What’s interesting is looking at lots of historical newspaper articles critiquing the eight-hour day and the two-day weekend – the arguments haven’t evolved at all. There were worries [about productivity and pay]. The economy certainly hasn’t collapsed, in fact it’s grown in terms of productivity and GDP by many times what we could have ever imagined.

Work ethic has become this new religious drive whereby work is seen as an end in itself, rather than a means to an end. Doing work and talking about work is seen as an important moral thing. The productive individual is seen as inherently worthwhile. You can see it in the way that people at the top talk about their impossible working schedules – tech CEOs saying they get up at 3am. The design is to show a certain level of self-sacrifice.

“A creative mind needs to be well-rested, it needs to have space to breathe, to experience other things.”

How would we get to a point where the four-day working week is accepted?
Change happens on an individual level, on a firm level, on a sectoral level and on a national level. Individuals can start thinking about working time rights and the ability to choose. On a firm level, individual bosses and companies can move employees to shorter hours. We’re getting trade unions to sign up to the campaign, which they are increasingly doing, especially in relation to the threat (or promise) of automation in the future. Then there’s government policy, in the way that France introduced a 35-hour week, or how China moved from a six to five-day week in the 1990s.

You can do things like create apprenticeship schemes and generational agreements, which have reduced working hours for older employees. You can improve and increase parental leave. Looking to the future, it will be interesting to see how automation can be used to benefit workers, and not just the owners of the machines. We can’t increase productivity and GDP [gross domestic products] forever – not least because we’ve got eleven and a half years until irreversible climate breakdown.

This is a shorter version of the full interview; read it in full here.

A supporting video for the 4 Day Week campaign

Ellen Rhodes: It makes us more productive and efficient

Ellen Rhodes is the operations lead of Normally, a London studio set up five years ago. The studio began working four days a week (with Fridays off) as an experiment, but it’s become an integral part of company culture. Ellen tells us how it works in practice and what it can offer early-years creatives.

How did you find the experience of swapping to a four-day week?
At first we thought that it might affect our profit margin, but we’ve found it makes us more productive, more efficient, happier and healthier. There’s 14 of us now, and everyone’s very respectful of each other’s time. Because we’re only here four days, we want to get the most out of the time we have together. [As an] employee, I want to do my very best in those days, because I want to enjoy my days off.

How do you feel a four-day week could be useful for new graduates?
It teaches manageable work practices from the outset. In this industry, especially in London, there’s this idea that the later you work, the more productive you are, and the more important you are in the business. For people fresh out of uni, a four-day week shows them that you don’t have to rely on extreme work practices to succeed.

It also allows you to explore. When you come out of uni, you’re excited; you want to tinker and have a side hustle, or things you work on with friends. A four-day week allows a day to do that. It also gives you the mental and emotional capacity to deal with going into full-time work. Burnout is such a big thing, having that extra day to decompress is really valuable.

“Burnout is such a big thing, having that extra day to decompress is really valuable.”

What are some of the most challenging aspects?
There can be times when getting everything done in a day can be difficult. But besides that, we need to manage client expectations and relationships. We’re delivering, so it’s not an issue, but sometimes if I get emails on a Friday morning and then reply to them on a Monday, it can feel like quite a long time to leave someone unanswered. So there’s a bit of management around communication, which can be challenging at times as everyone’s used to an agency being on-call all the time.

What advice would you give to other businesses wanting to go down to four days?
Change needs to come from the the top-down. If the management aren’t leading by example, it’s hard for the team to follow. Our directors are the biggest pioneers of the four-day week. If they knew that someone was working overtime, they’d question how we could help manage the workload.

We’re a small business, so it’s easier to experiment, but it’s a big shift in normal working behaviour and practices. You need to rethink how the team collaborates and communicates.

This is such a cliché, but not being afraid to fail is important. Implementing any flexible work practice will need a trial, but the impact, not only on the business but society as a whole and personally, is huge. It can alleviate childcare responsibilities, put less strain on the NHS and improve your own mental health. I think it should be done and it can be done, but it does take a lot of leadership and really believing it can work.

Both these interviews are taken from our latest Insight Report The State of Work: Issues Affecting Creative Careers in 2019. These extracts have been shortened; read them both in full by clicking below.

Toby Roberts, junior creative at 18 Feet & Rising: “Learn how your brain works best, then go for it”

How to maintain balance, manage stress and avoid burnout at work

The Great British Bake Off illustrator Tom Hovey on money, style and drawing food all day

What are the benefits of a four-day working week?