While Instagram and Twitter are brilliant ways to share new creative output, we’ve recently noticed these platforms being used for quite a different reason: Exposing misuse of work. Online culture has muddied the waters when it comes to ownership of images, writing or ideas, with many people unaware of the legalities and rules attached – on both the creator and ‘borrower’ side. And it’s not just limited to established artists; tales of lesser-known creatives having their work shared uncredited or used for commercial gain are rife (including this recent example, featuring Tesla and a farting unicorn). Following our introduction to intellectual property and guide to protecting your work, we get first-hand accounts of how having work stolen and misused can play out, with input from artist and printmaker Anthony Burrill, illustrator Stephanie Unger and photographer Sophie Mayanne. 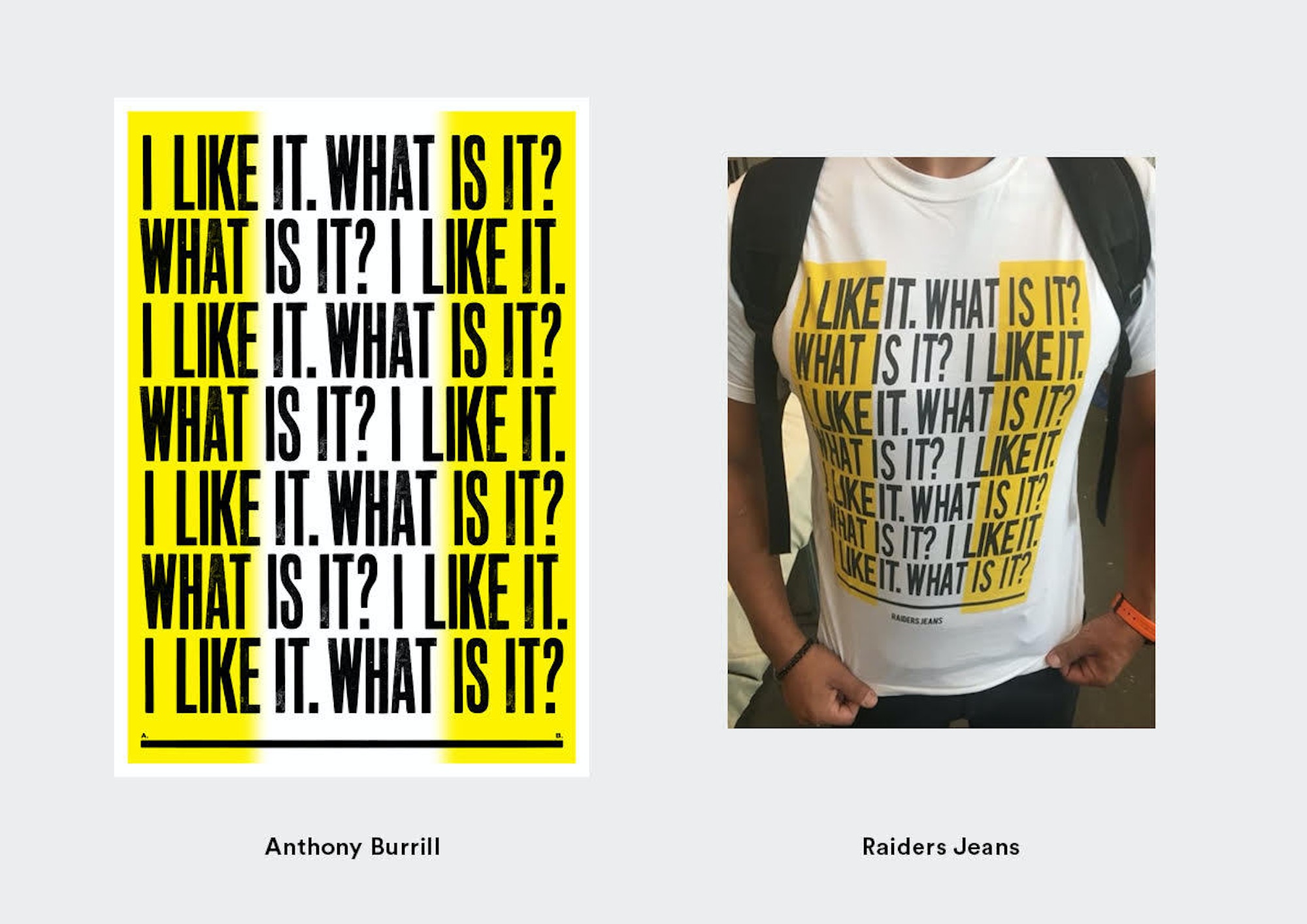 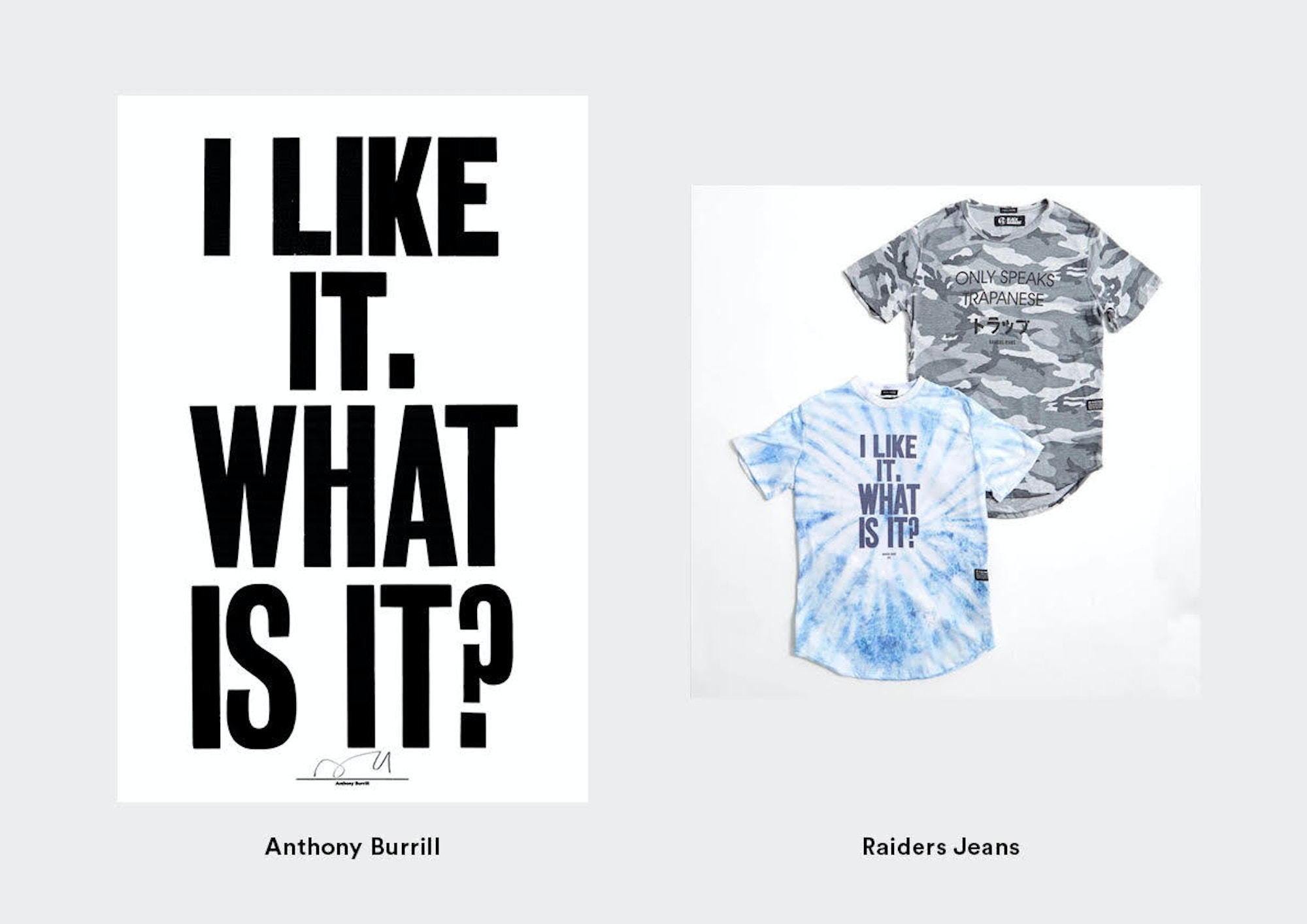 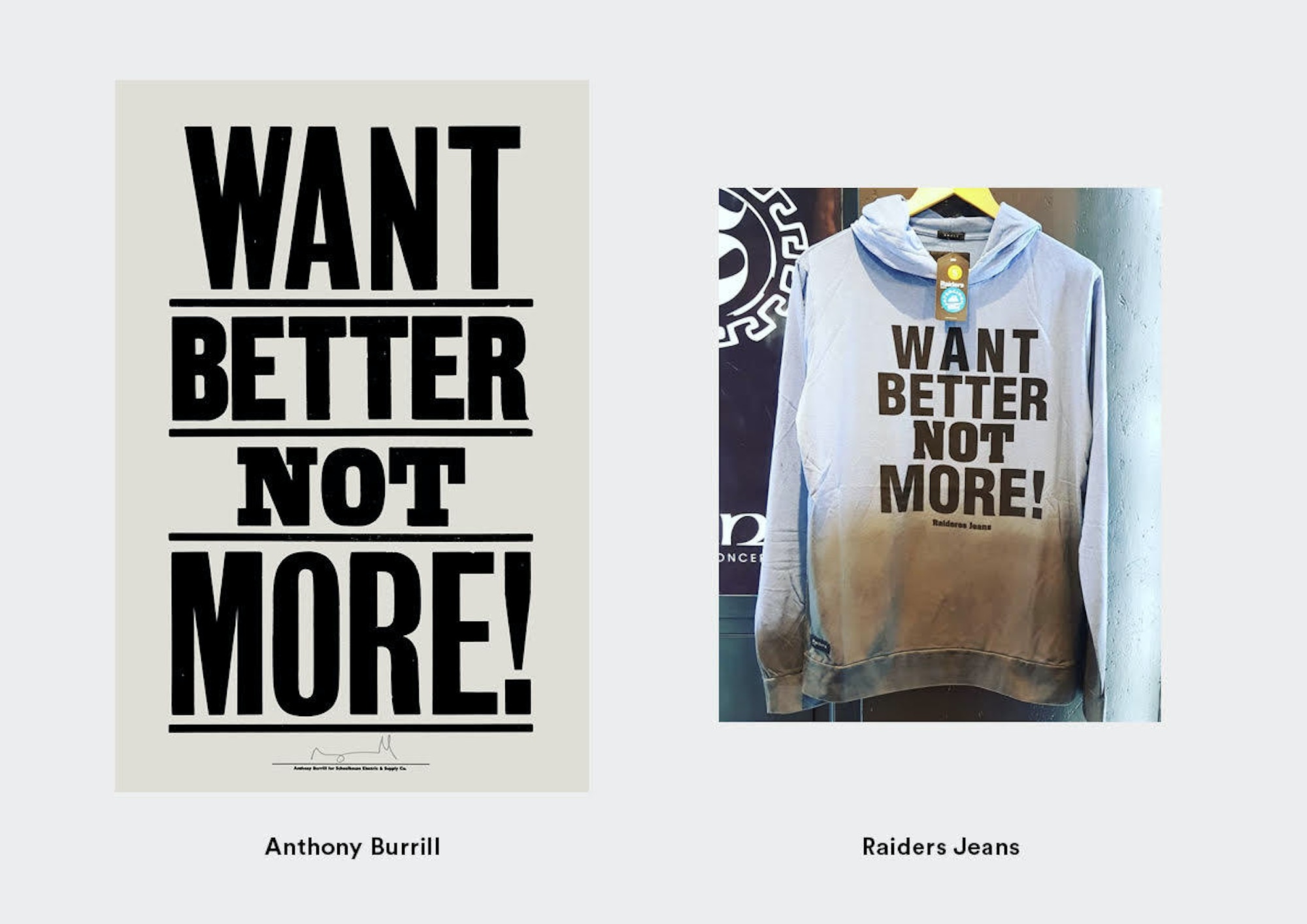 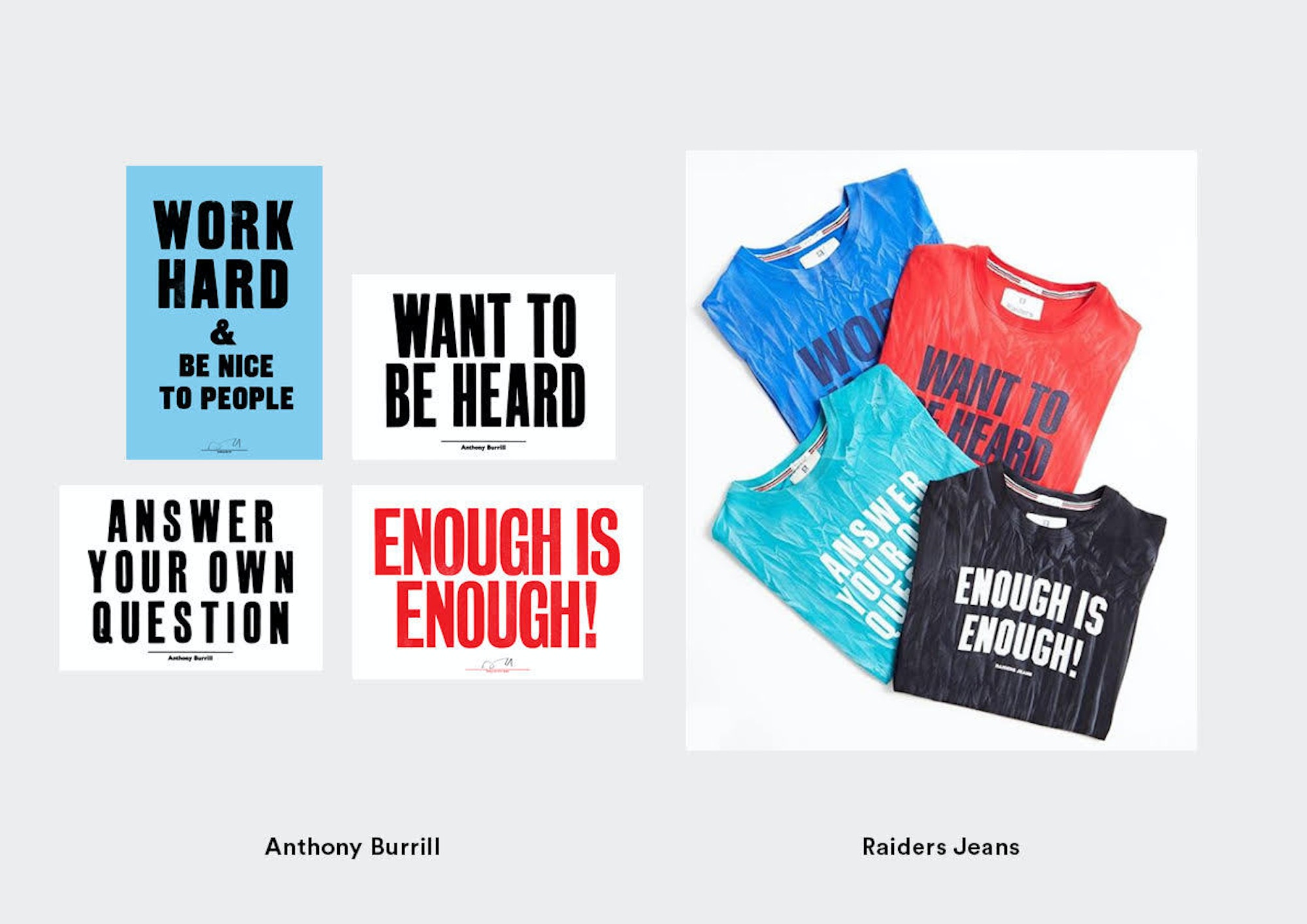 Anthony Burrill, graphic artist and printmaker
Known for his typographic, text-based posters, many of Anthony’s artworks have become icons in the design world. He has exhibited at the Victoria and Albert Museum, New York’s Cooper Hewit Museum and the Design Museum; but is also subject to much replication – often without consent.

The first time it happens, you have quite mixed feelings about it. On the one hand, when someone copies you, you think ‘At least someone’s taking notice.’ But on the other hand, it’s just weird and upsetting. They might be using something I’ve been developing since college, which can feel quite violating. Usually it’s just people (often students) who have been ‘heavily inspired’ by your work. But where I draw the line is when somebody is making money from it.

It began happening when I was more established, a few years before social media, so it was harder to track things down. I’ve reached a level of recognition now that people know a lot of my work, especially the phrases, so they can see it’s been ripped off. The good thing about social media is that people pick up on it straight away; it’s a bit like having spies. And commercially, it’s only happened a handful of occasions.

The most recent example was about two months ago. A jeans company in Argentina was producing lots of clothes with my prints on them [see above], which I discovered through someone sending it on Instagram. We contacted them and they took everything down straight away, but they haven’t answered any of our emails.

We previously had a similar thing with a T-shirt company in Belgium, and on another occasion a fashion company in France printed ‘Think of your own ideas’ on a bag – which seemed pretty ironic! They said the designer found it on the internet, as if the internet is an open-source image library. Companies will often blame a designer who no longer works for them, or a freelancer – they never take responsibility themselves.

“Companies will often blame a designer who no longer works for them – they never take responsibility themselves.” – Anthony Burrill

In terms of pursuing it, we’ve used the same lawyer’s letter a few times, which cost under £100. But in general, I’d rather concentrate on positive things and move forward, rather than fighting with idiots. It’s tricky. You don’t want to moan about it on social media, so most of the time I don’t mention it. I’ll just get in touch with the person who’s copied and say, ‘I’m the artist, what are you up to?’

I looked into copyrighting ‘Work hard and be nice to people’, but it’s impossible without putting a trademark or registered symbol into the artwork, which sort of ruins it – and it’s not in the spirit of the original piece. But with that example, it’s almost crossed out of the design world and into broader culture. So in a way, I’m quite happy about people doing their own version of it now.

I can’t imagine how painful it would have been for this to happen when I was less established. I think it feeds into a broader question of ethics, especially in the fashion industry. Fashion can be particularly loose about referencing and taking direct inspiration. This stuff needs to be clarified – larger companies should have have more robust methods of discovering where their designs are coming from.

If it happens to others, I would recommend acting fast. Get as much information as you can, taking screen grabs before anything gets deleted. Then I’d advise taking it to social media, or contacting design blogs to get your message out there. But do make sure everything is really well documented before you launch into an online rage! Also, make contact with a lawyer – sending a letter from a registered law firm has more clout, and lets people know you’re serious. It also depends on the lawyer, but I feel they’re often willing to help an emerging designer. 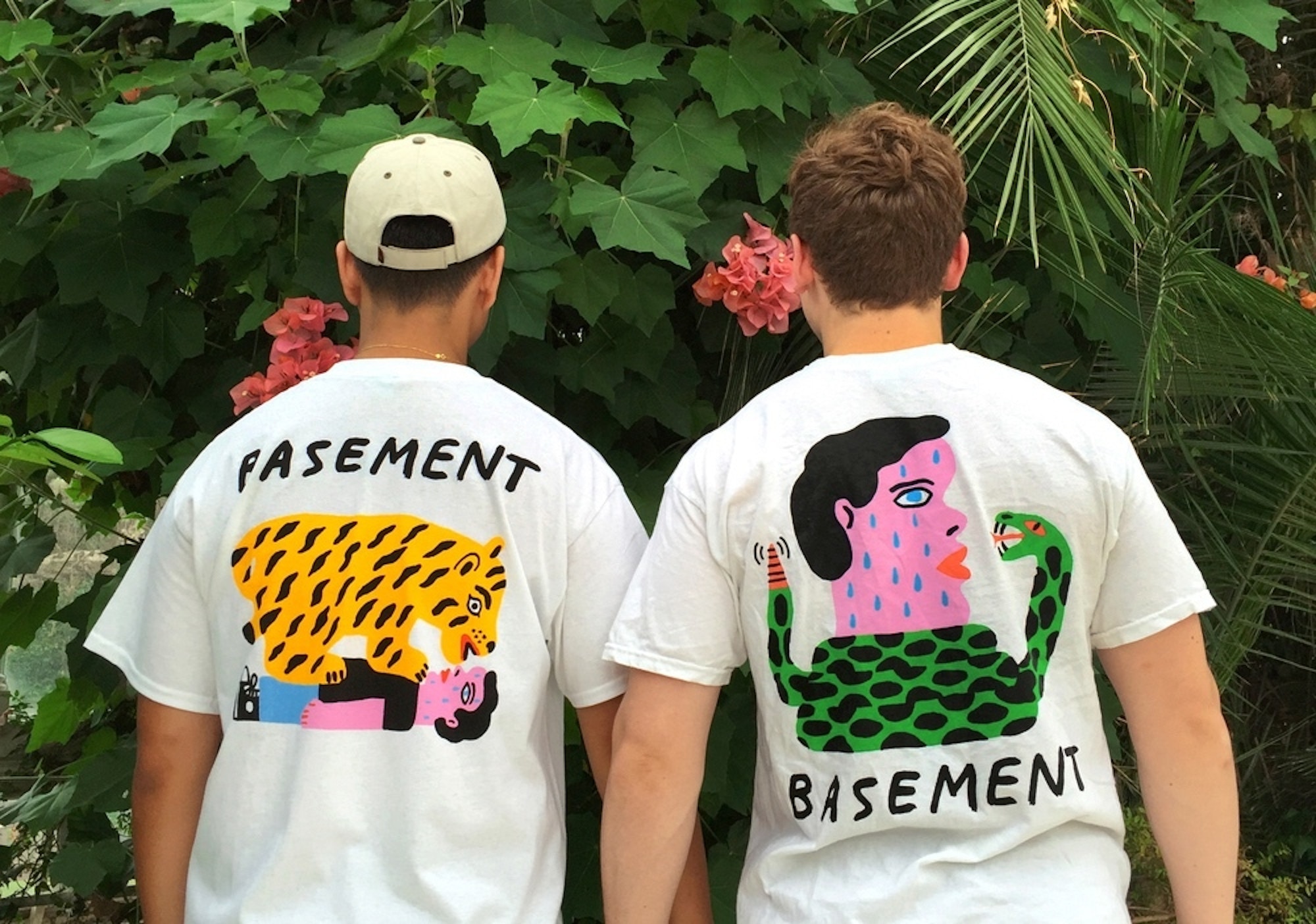 Some of Stephanie’s T-shirt designs for band Basement

Stephanie Unger, illustrator and artist
Since graduating in 2014, Brighton-based Stephanie has worked with clients such as Lush, Grindr, Refinery 29, JumpFromPaper and Deliveroo. She describes her experience of being harassed by a company selling counterfeit T-shirts featuring her designs.

It started on the day I first uploaded a T-shirt design for the band Basement to my Instagram. Someone began replying to all the comments under the post, directing them to a website where you could buy a rip-off version. I blocked the account, as I didn’t want any of my followers to buy a T-shirt from an untrusted seller, get scammed and receive a poor quality copy – or even worse, not receive anything at all.

After I blocked the first account I thought it was done. But later that evening a second account did the same thing, with a link to the fake T-shirt. Again I blocked the account. Then a third and fourth account appeared, and by the end of the evening I had blocked over 10 accounts. To top it off, I also received a really rude, chauvinistic email from one of them.

I honestly felt completely helpless, like I was being harassed. You can block one account, but when it’s loads, what do you do? I felt anxious the whole night, checking my Instagram in case a new account was spamming and harassing my followers.

“​I felt really embarrassed and ashamed about what was happening.” – Stephanie Unger

The band passed the information onto their management, and they are still sorting it out. I also decided to share the story with my followers, as I didn’t want anyone to be tricked into buying the fake T-shirts.

I felt really embarrassed and ashamed about what was happening. Part of me just wanted to not say anything and let it go, but I’m really glad I didn’t do that. I got an amazing amount of support from people which was really uplifting, and the experience has taught me to stay positive. You can’t let these situations get you down. 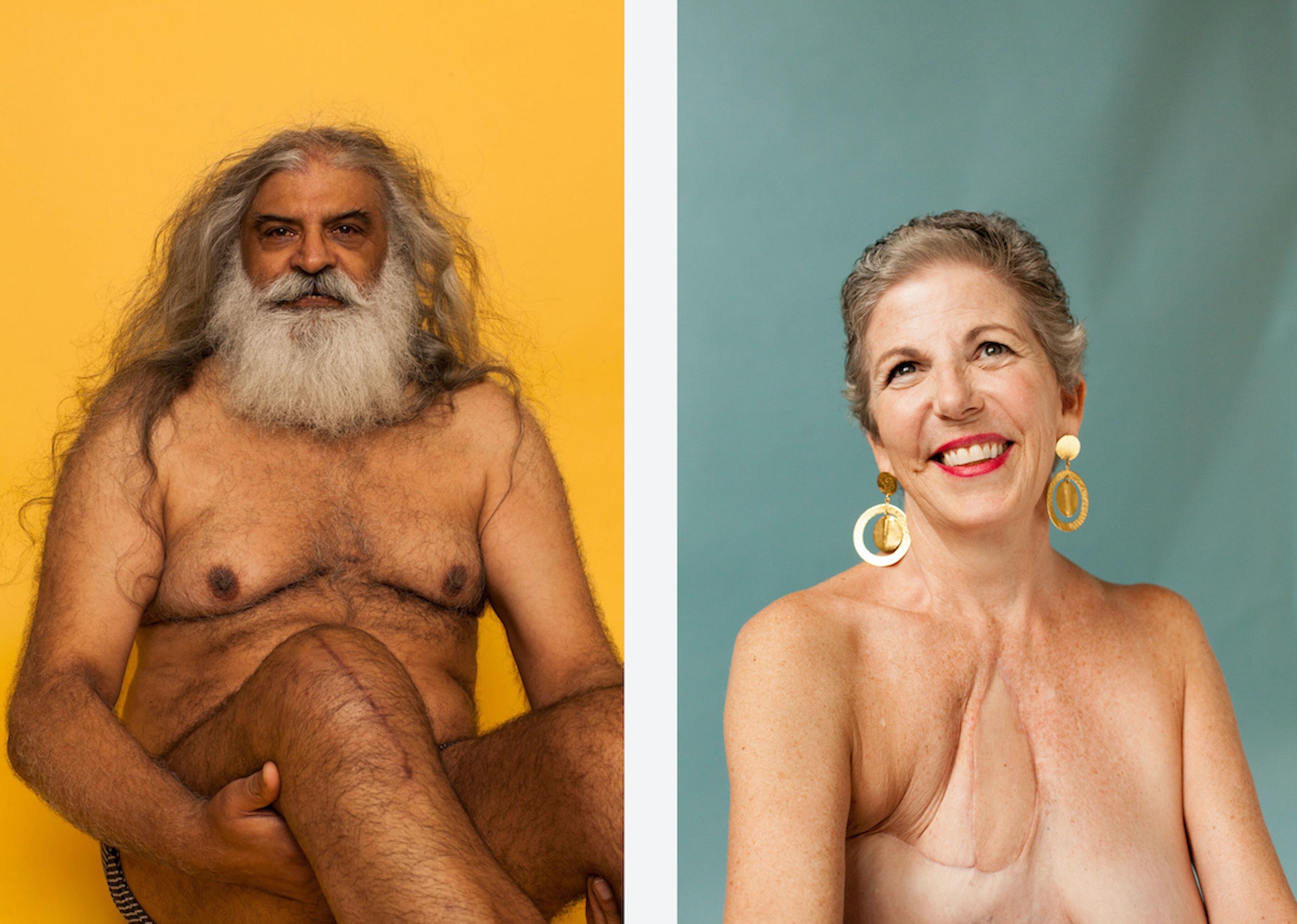 Two images from Sophie Mayanne’s project Behind the Scars

Sophie Mayanne, photographer
24-year-old Sophie is based between London and The Cotswolds. In 2017 she began a project called Behind the Scars, which celebrates scars of all shapes and sizes, and the stories behind them. It has since attracted attention and press around the globe.

I began noticing issues with my work not being credited around January 2018. One photo from the series was posted on Instagram, which garnered a lot of attention, and was then circulated by press. Most of the articles didn’t bother to request my permission, and there were a number of mistakes with crediting.

Since then, I’ve seen my work appear on TV shows, magazines and newspapers completely uncredited, so have had to chase it up. I also worked on a campaign with a similar aim to mine, and sadly I faced the same issue with lack of crediting.

It ended up having quite a big impact on my mental health, so I decided to take a break from posting any new work on social media. It got to the point where I felt like every time I posted something new, it was taken, reposted and shared without credit. I started to post about the experience each time it happened, and found that many other photographers were having similar issues. Some even said that they had work stolen by brands and large companies.

I initially reached out privately to people sharing the project without credit, but I wasn’t getting any response. I took steps to trademark the project, and am still looking into legal advice to further safe-guard the project. However, I don’t think it should just be from my side.

An image will always have an author, and journalists know this, but many of them will take it and use it anyway. They take the attitude of ‘fixing it later’ – posting the article, and only adding credits when you have specifically requested it. I’ve had other magazines edit the background colour of images and crop them without permission. The list goes on!

“When you post online, a large majority of people aren’t aware of the importance of crediting.” – Sophie Mayanne

When you post online, a large majority of people aren’t aware of the importance of crediting. But each time an image is shared without credit, the photographer could essentially be missing out on work. People can automatically assume that the image belongs to the public domain, and when a credit is missed once, it can be missed many times.

A lot of people have suggested watermarking my images, but I felt this would detract from the work. Although I personally don’t like it, this may be a way for others to safeguard their work. You can also adjust your website so it’s not possible to screenshot or right-click and save your work, and add terms and conditions about misuse. You could also cite your copyright under everything you post. Educate your audience – the people who love the work will want to help.

Trademarking was a route I chose to go down, but this does have a cost attached. Also, voicing how I felt on Instagram has been helpful, as people who spot things will now let me know. The experience has taught me that there are positive and negative things about the internet, and that not all press is good press! My general advice would be: If you like an artist’s work, be respectful and credit them. If you’re unsure of the source, it’s safer not to post it.