American artist, graphic designer and illustrator Steven Chorney is the man behind literally hundreds of Hollywood’s biggest movie campaigns. Having spent his career hand-painting posters for the likes of MGM, Disney and Warner Brothers, you can currently see Steven’s talents at work in Quentin Tarantino’s Hollywood blockbuster, Once Upon a Time in Hollywood.

As well as creating the promotional artwork, it was Steven’s job to paint era-specific posters for the film itself, featuring leading man Leonardo DiCaprio’s character, Rick Dalton. But the biggest surprise of Steven’s illustrious career? That he was actually able to fulfil his childhood dream of being a professional artist. Here, he shares more about his journey, the process behind working on Once Upon a Time in Hollywood, and how he hopes the nostalgia for 80s movie posters will continue. 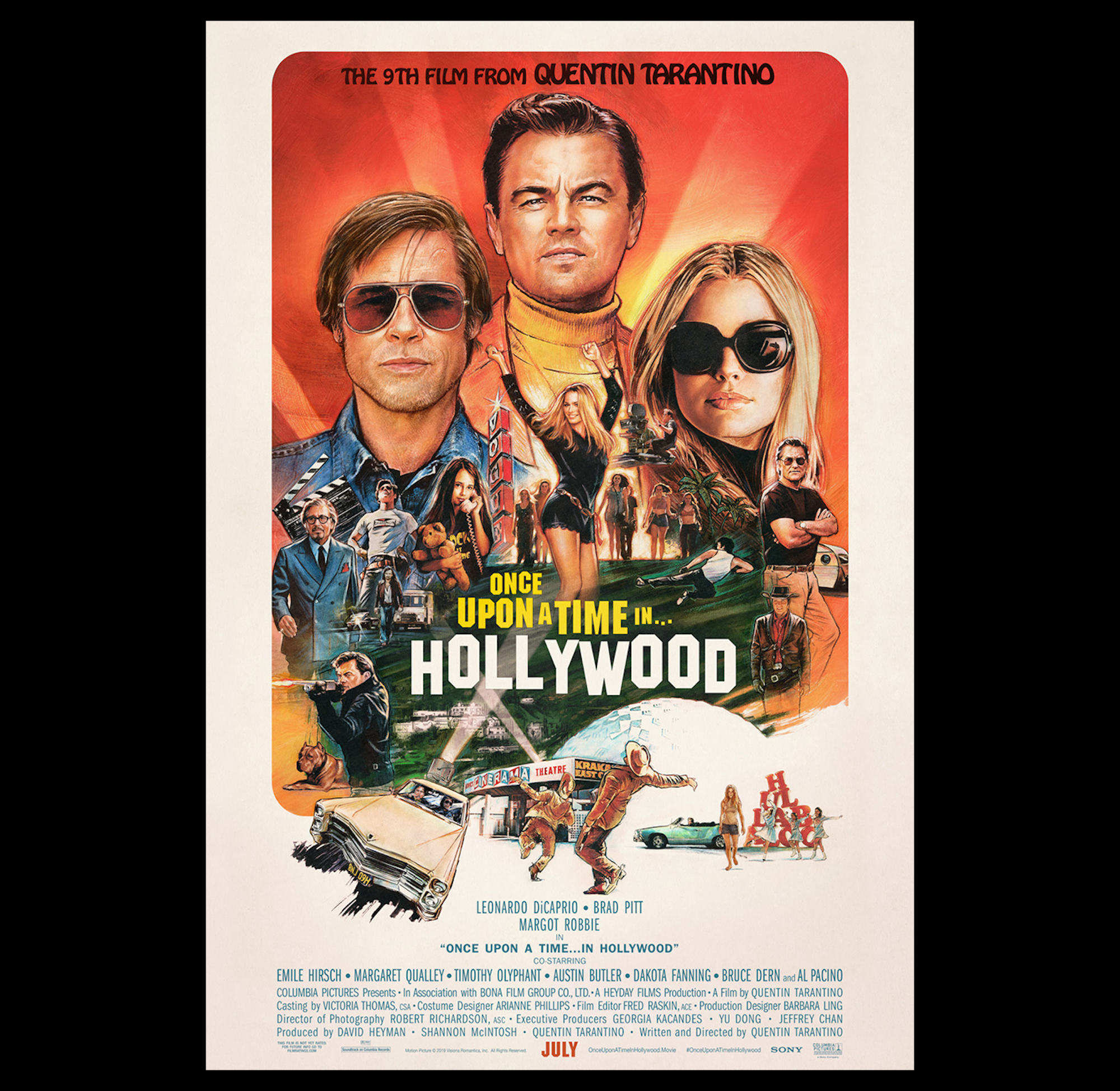 Can you tell us how you came to work on Once Upon a Time in Hollywood?
I was asked to provide initial sketches for a well-known agency here. Lots of ideas were explored in the early stages. As the project unfolded many additional artworks came to be included, such as concepts for faux movie posters to be used within the film itself. Quite a few final artworks were developed including some by the veteran Italian poster artist Renato Casaro.

I worked on roughly seven designs, some of which were remakes of vintage posters from the 1950s. Primarily they were Spaghetti Western-style posters but featuring Leonardo DiCaprio as the film star.

“I was able to help create a simplified composition that included all the elements (even Quentin Tarantino on a film crane!)”

We weren’t certain which paintings might be used if any. A few were unexpectedly used as advance posters while others were in the film as props and some not. The final poster used as the key art was a separate piece of work; it was borne after several previous attempts met with less than exciting responses from the filmmakers.

So, it was back to the drawing board in a final attempt to create a more effective visual. At the filmmakers’ request there was a lot to include making for a difficult final solution. But along with the agency art director I was able to help create a simplified composition that included all the elements (even Quentin Tarantino on a film crane) and yet retain a somewhat vintage appearance. It was presented as a finished painting and was selected as the key art for the film. We were happy. 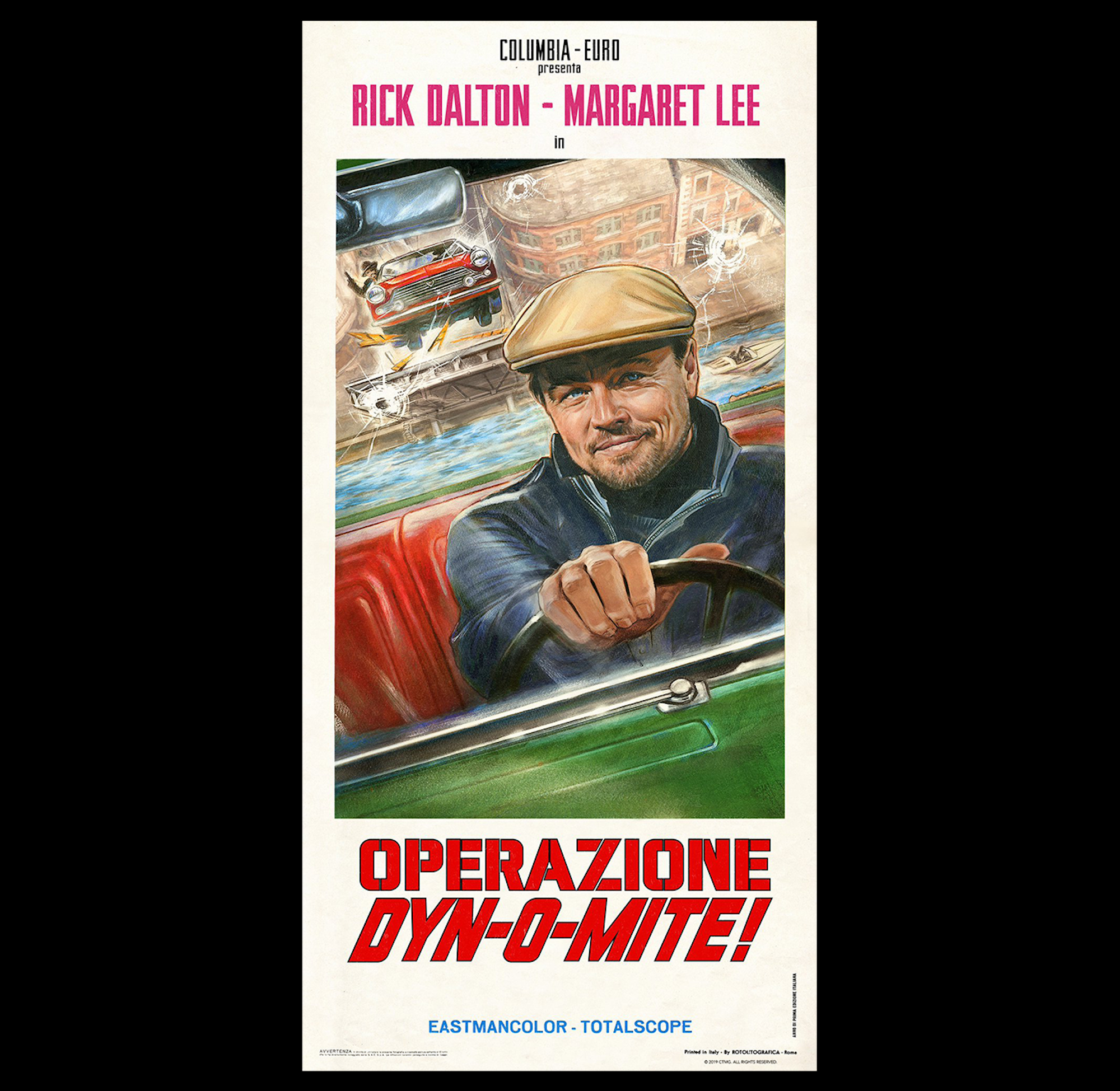 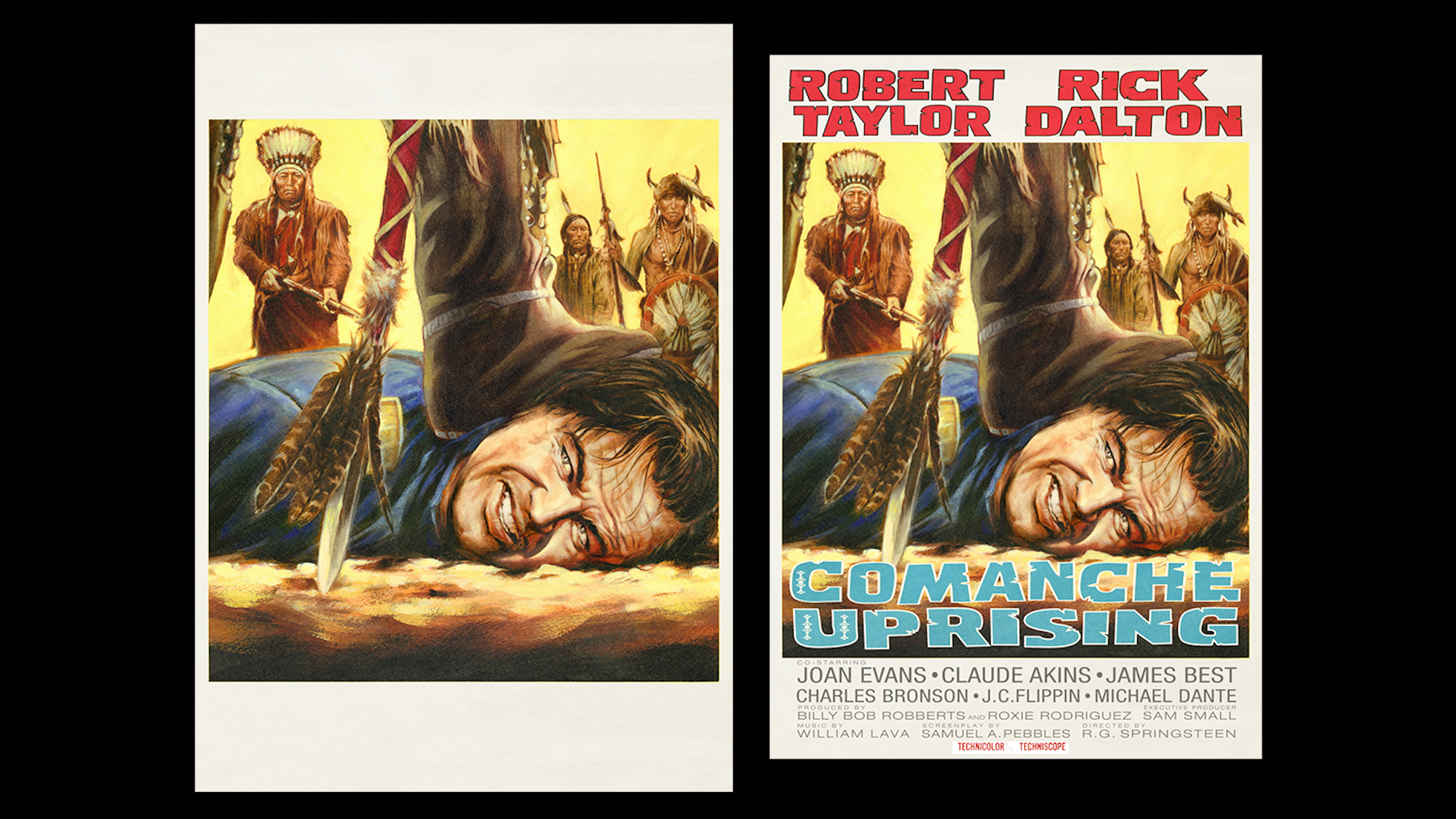 What is the design process like?
We start with photos of the actors. At times the process begins in the early stages of the film’s production, so the sketch process allows for idea exploration. Simultaneously, others are at work creating photographic or Photoshop treatments as well. Many, many concepts are presented during the process.

“If a project calls for my help I will use acrylic paints, brushes, pencils and even a toothbrush at times.”

If a project calls for my help I will use acrylic paints, brushes, pencils and even a toothbrush at times. Sometimes, my role is the last one in the process. The movie studios start with rough guidelines, the art directors conjure up countless directions to follow and the artists bring it all to life with sketches and artworks.

How long does it normally take to paint a poster?
In the area of movie posters time constraints are routine. Deadlines tend to be tight ranging from the possible to the impossible. Sometimes a poster will take a week sometimes a day…then it may come back for substantial revisions with another tight deadline. But somehow it all gets done. 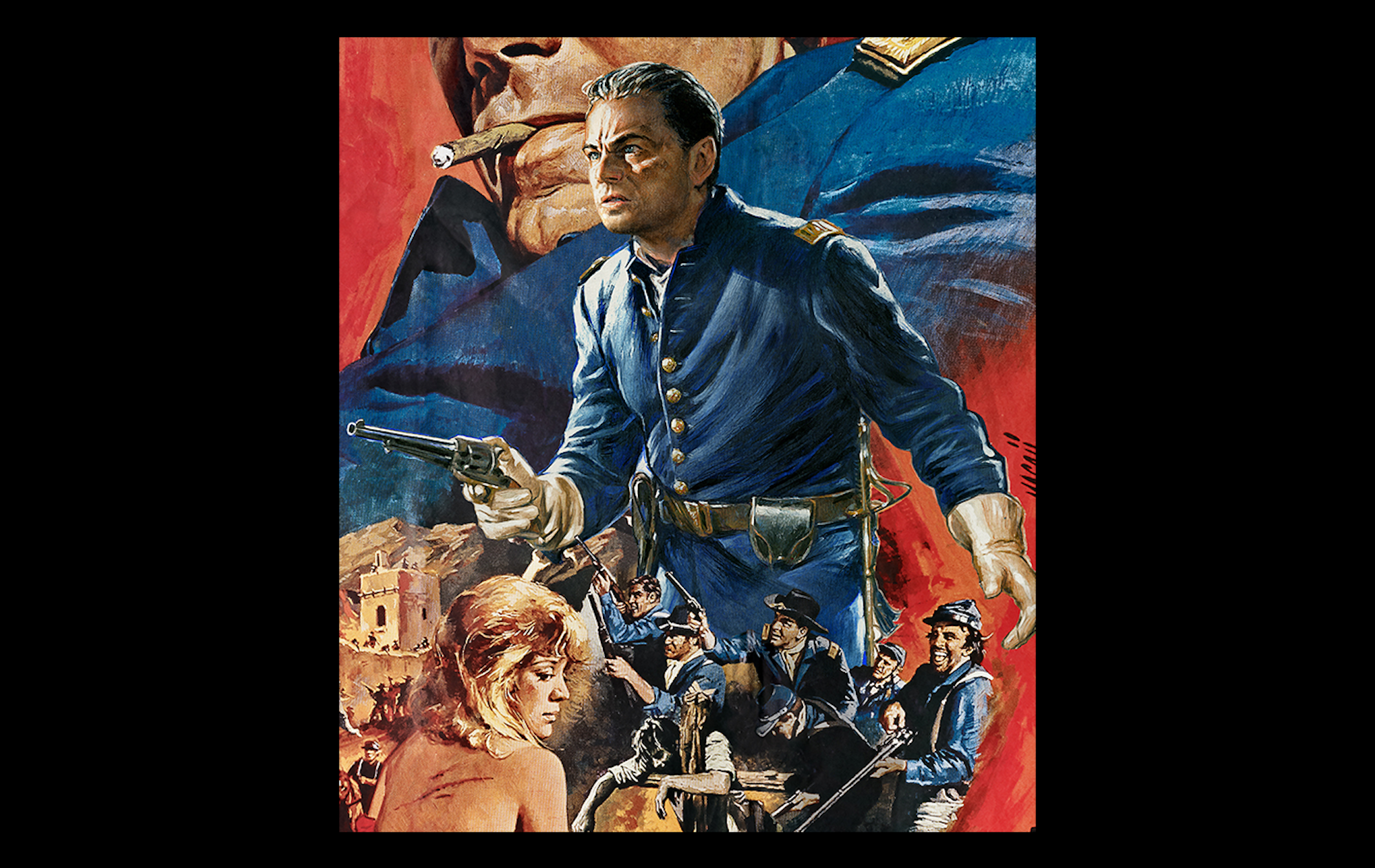 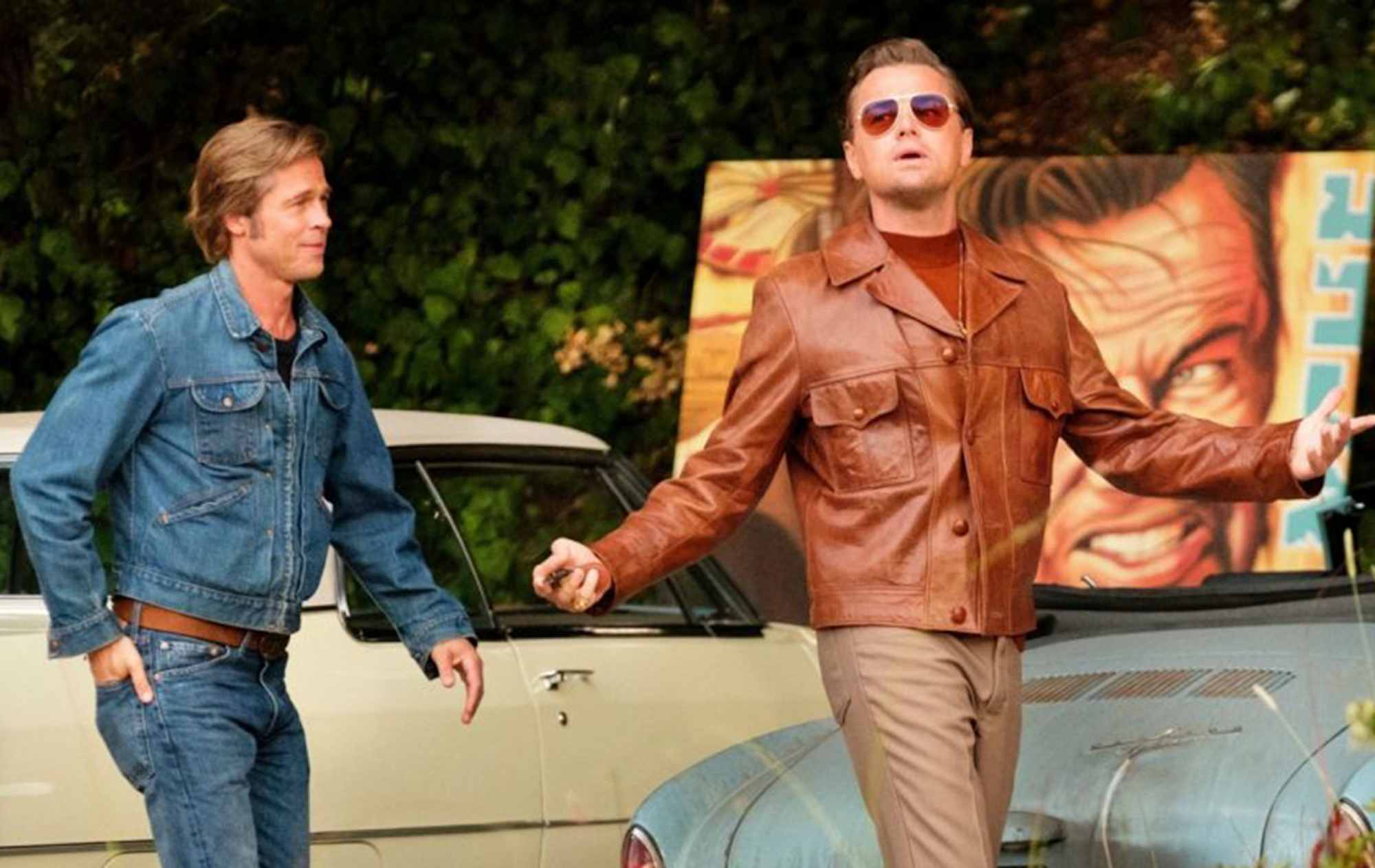 How did you get into the industry?
I did not go to art school or receive formal art training. My father did, however. He graduated from art college in Toronto, Canada. Watching my father paint looked like so much fun! I was able to grow up learning to draw and paint from my earliest recollections. I never thought of doing anything else.

Would you say you ever experienced a lucky break?
Maybe lots of small things that led to bigger things. I learned to paint signs as a teenager, and also drew characters in high school. This was what got me in the door at my first paying job as an artist. I was hired in a small animation studio in Hollywood. There I would learn a lot and met many other animators and illustrators who would have an influence on me. One step at a time, it took me in other directions from animator to storyboard artist to illustrator – an exciting journey.

“The biggest surprise is that I was actually able to fulfil my childhood dream of being a professional artist.”

What challenges are involved in your job? Have there been any surprises over the years?
Perhaps the biggest challenge for many artists, myself included is coping with the deadlines on each project. Trying to do your best under the pressure of time. Some have left the field of commercial art for that very reason. As for surprises? Maybe the biggest surprise is that I was actually able to fulfil my childhood dream of being a professional artist.

Are there many other people today doing a similar role?
Looking back over time it seems to me there has always been only a small circle of artists engaged in creating movie posters, at least here in Hollywood. It is true today as well. It may be in part due to the need for a fast turnaround as deadlines and revisions can become quite hectic.

Still, there does seem to be a re-ignited interest in the hand painted poster. So much so, that a ‘cottage industry’ of sorts has developed providing collectors with re-imagined alternate posters of past films. This has allowed many talented artists an opportunity to be involved in some way. Why the resurgence of interest? Perhaps the generation that grew up with those posters of the 80s are now experiencing the nostalgia of an earlier time. Let’s hope the trend continues!

Breaking out of the ‘art school frame of mind’ with Glasgow-based illustrator, Fran Caballero