Parts of the Process — Behind the scenes of the banned Greenpeace-turned-Iceland ad, with Passion Animation Studios

As the wave of Christmas ads continue to compete for ratings and win over public favour, there’s one ad that won’t be part of the cycle on TV this year. Touted as this year’s ‘banned’ Christmas ad, supermarket Iceland’s offering was recently taken off the airwaves for being ‘too political’ by advertising body, Clearcast. Narrated by Emma Thompson, the film tells the story of Rang-tan, an endearingly rendered orangutan who loses his home due to palm oil’s impact on the rainforest.

Originally produced by Passion Animation Studios and Mother for environmental charity Greenpeace, the film was later acquired by the supermarket, who were keen to align with its social messaging. Regardless of the ban, today the film has clocked up over 30-million views online. But as the press and media machines continued to turn their gears, the animation process itself became increasingly overshadowed and neglected by the headlines. We reached out to the animators behind it all, Salon Alpin (Simon Griesser and Philipp Comarella) to uncover just how the process unfolded. Working between Lisbon and Vienna respectively, they talk designing characters, using VR to animate and keeping craftsmanship at the project’s heart.

The original brief was: “In short, we are creating a spokesperson for the rainforest. A young orangutan named Rang-Tan appears in a little girl’s bedroom. At first the little girl doesn’t know what to do and Rang-Tan starts to become a bit of a nuisance. But everything changes when Rang-tan eventually reveals why she’s there.”

From the beginning, this was clearly an interesting project due to its goal to raise awareness for the cause. We haven’t worked with Mother before, though we have done art for Greenpeace in the past; we prefer projects that transport a message, rather than focus on selling a product. If it carries a message that makes all our future (and those of orangutans’) brighter, even better so.

But apart from that, the script and how Mother set up the plot as a children’s book, immediately resonated with us. We got excited thinking about how we could develop an animation flow that could follow along Emma’s voice merging everything together in an intense experience. We knew there was a lot of room to design, big epic scenes but also calm and intimate moments.

“The way the plot was set up as a children's book immediately resonated with us.”

The guidelines from Mother were fantastic – we had a clear and simple story and concept for the production. There was not much time to put together a pitch, but we quickly knew what we wanted it to look like. Luckily, Mother had a precise vision which aligned with our ideas, and we adapted this to give the spot the right emotional energy.

This allowed us to create a motion test and VR exploration of a forest scenery for the pitch. By the end of it, we had a solid package to present, and helped convince them that we were the right team for the job.

First, the brief normally triggers a vision. In this case, two visions. We then discuss first thoughts and ideas. If they complement each other, we start to research and gather references to help narrow down our ideas.

On this project, it was mainly about understanding the natural environment of orangutans, the way they live, how the move, and how they communicate. Then it was about the palm oil industry, the scale and pace at which the palm oil production works. Due to budget and time we could not fly to Burma to get a full impression of the habitat or palm oil plantations, so we focused on image and video references that we were provided. 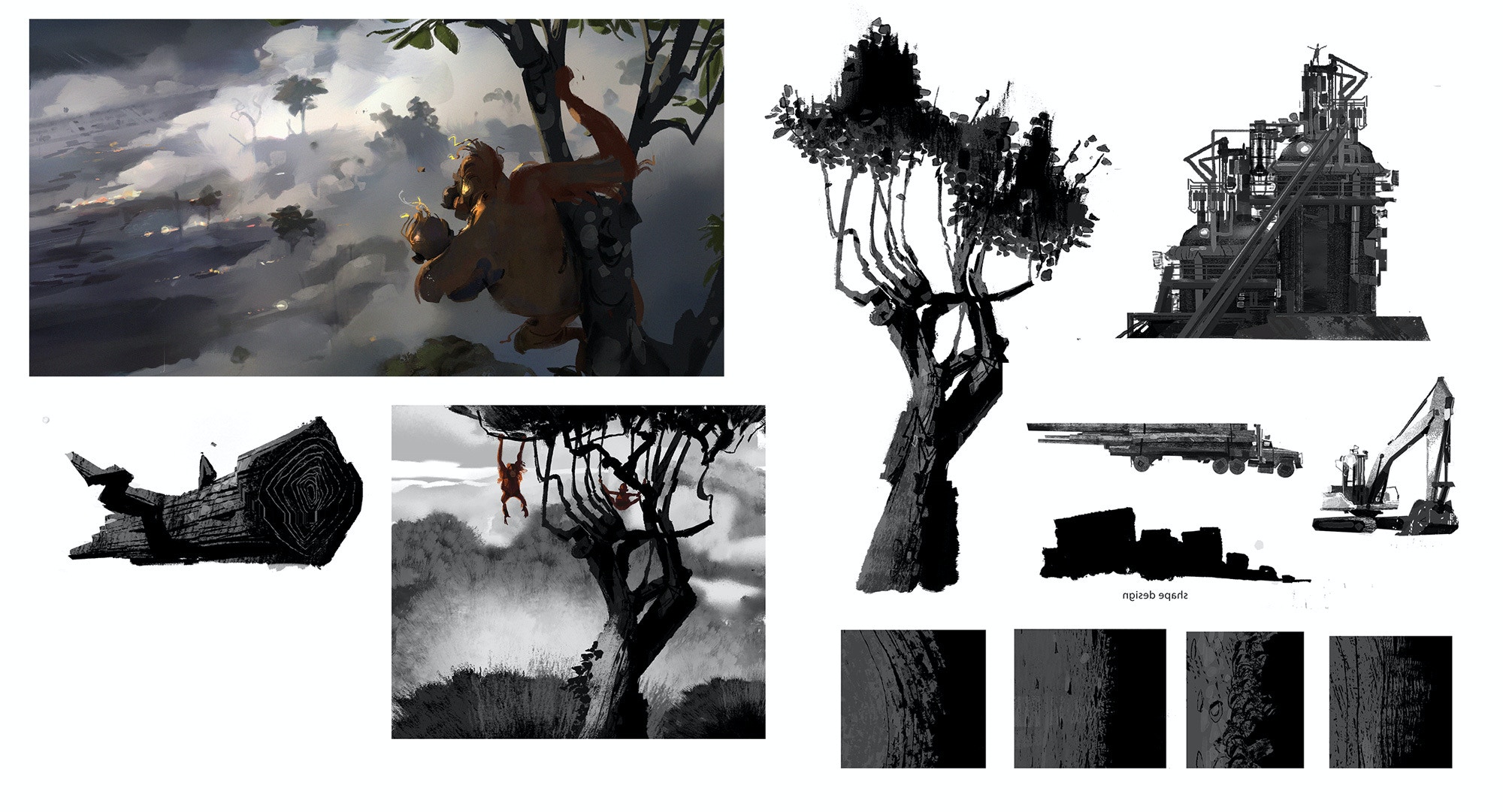 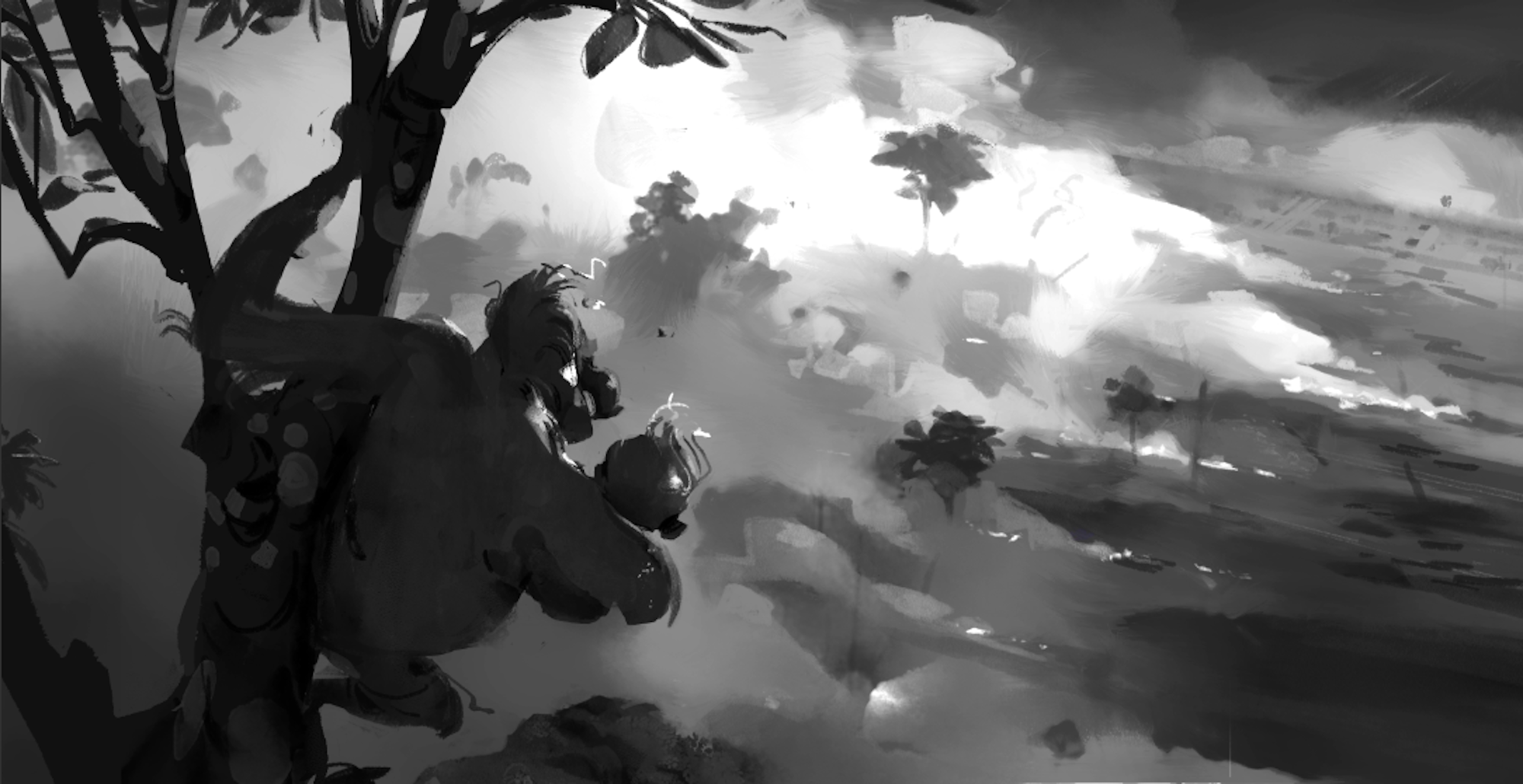 Finished still from the film 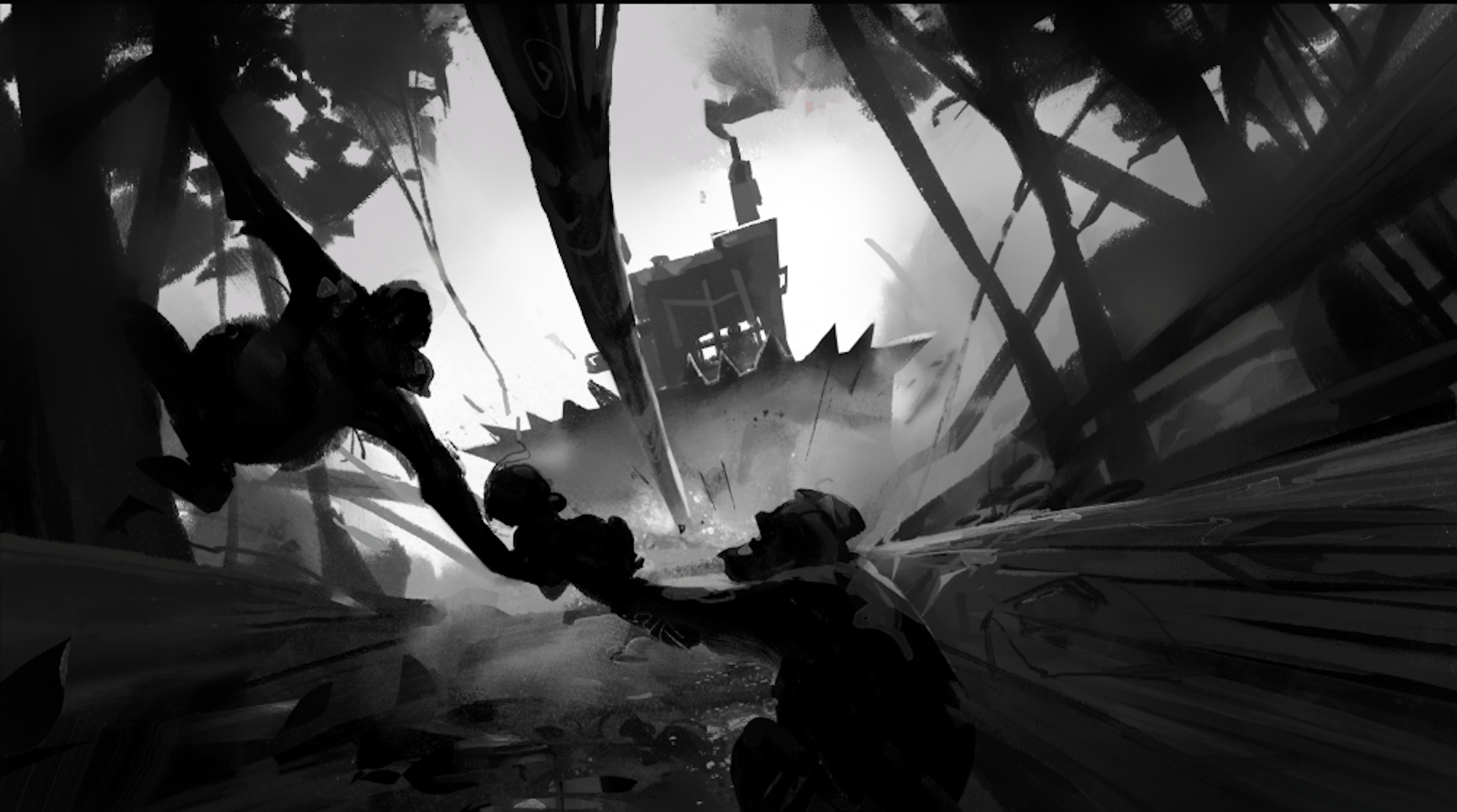 Finished still from the film

The character design was focused on finding a different look to Disney. We didn’t want Rang-tan to look like a relative of King Louie [from Disney’s The Jungle Book] or be confused with a chimpanzee or gorilla – or even worse – with a monkey (monkeys have tails, primates don’t). Since the little girl and Rang-Tan would have an argument and later become friends, we wanted them to be similar in size.

We got to work with some very talented character artists that helped us to find the right definition for Rang-tan. We want to thank Therese Larsson, Thibault Leclercq and Marceline Tanguay for helping us in the process. As well as Borja Montoro, our lead animator who gave Rang-tan and the little girl a soul in motion. 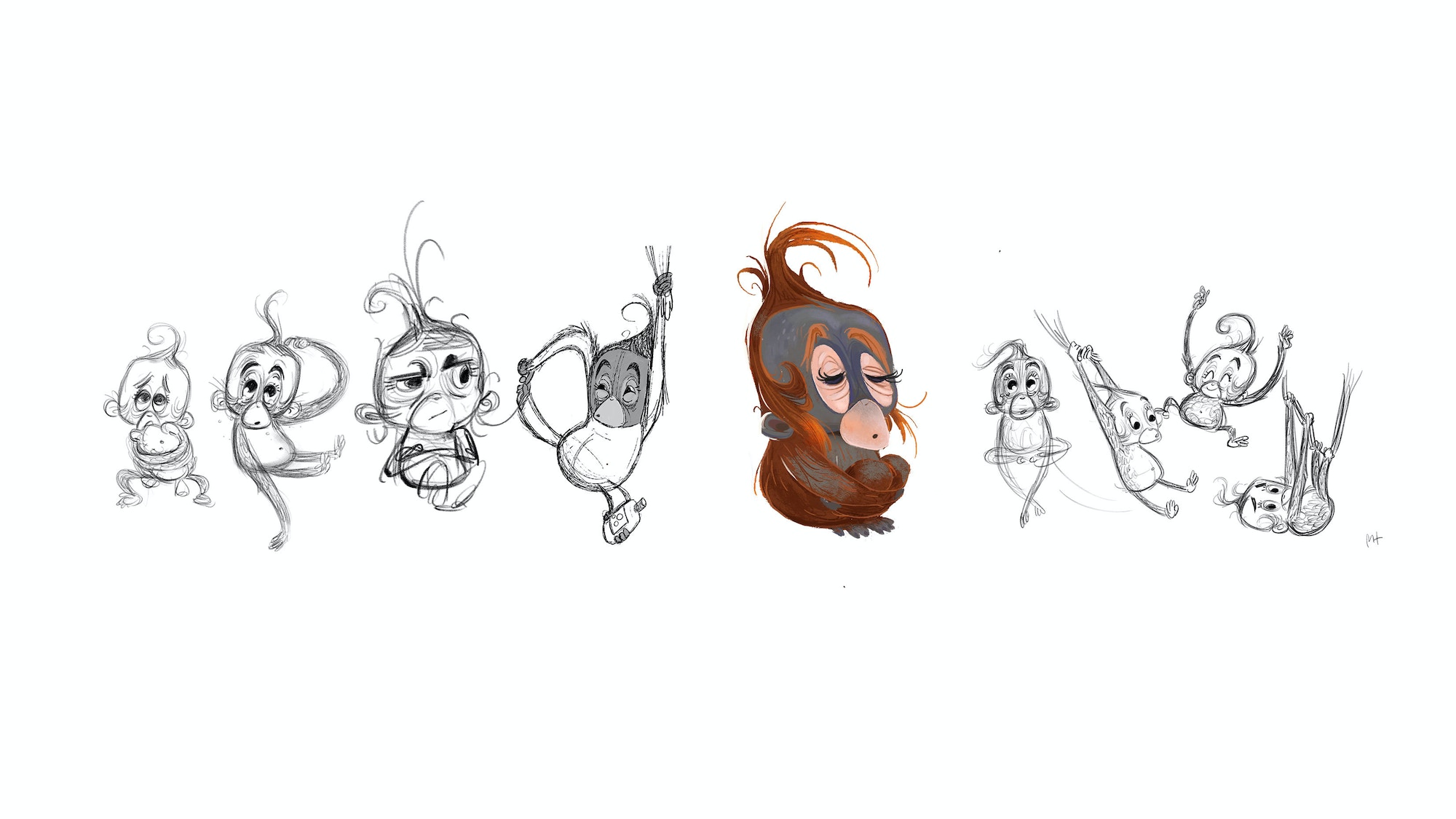 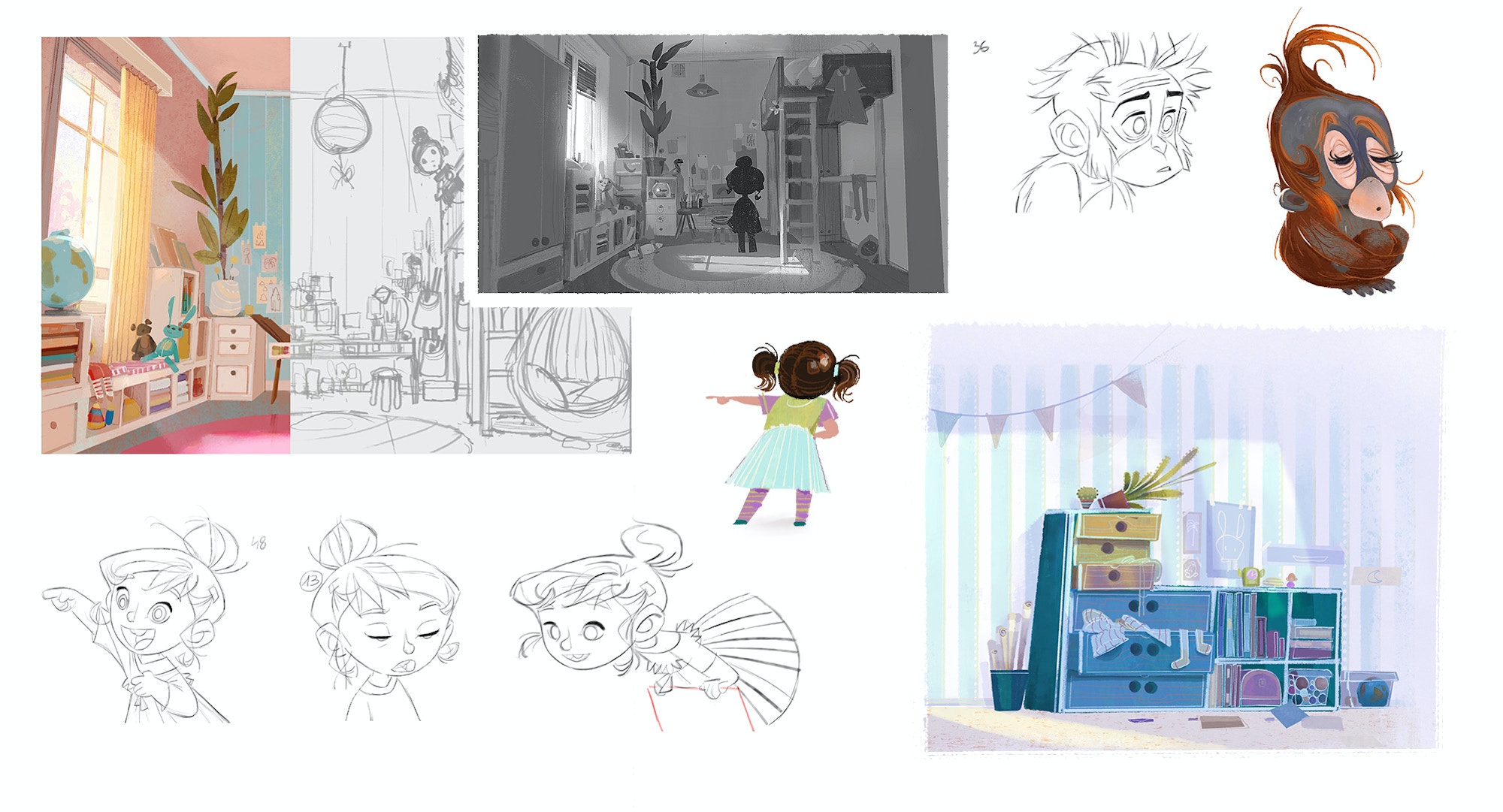 We did not do much testing before deciding on a direction. But pre-production included making an animatic, which we assembled from storyboard images, 3D-blocking animation and 2D-blocking animation. This way we had a clear idea as to what assets we needed to produce before assigning work to the animators.

For example, we knew exactly how much time we needed for the black and white sequences, and we knew what we want to do. Because we were using cell animation, the character designer had to fill in the animation with the blocking we assigned. But it worked out well-considering that we worked at ten-times the speed of a normal feature-film production timetable.

“The goal was to keep craftsmanship visible throughout the film. Our love for detail guided us through every shot.”

Every element was handmade, not computer generated. It takes a lot of effort to find a balance that works, and to hide the tools we have been using. But our love for detail guided us through every shot.

Part of the animatic

For cinema, it’s all about scale, but we knew it would also be used beyond cinema. The biggest advantage is that small-scaled objects in cinema are still big, but you also want to be able to recognise it when you watch it on a phone. So we tested the scale of objects during the animatic stage by watching it in a VR cinema with Oculus video. You can select a cinema room where you experience your film on a 30-metre projection.

As time was of the essence, we didn’t separate stages during the project, so post-production time is included with that of pre-production. It took two-and-a-half months all in all, during which time we were fully involved in every part of the production. We tend to jump in and fill the missing spots if necessary. From past projects we know that a team is willing to do night shifts if the directors are. It’s like working in a restaurant: it’s only a good one if the owner is working there as well.

“It's like working in a restaurant: it's only a good one if the owner is working there as well.”

For this project, we were working with creatives in five other cities in Europe (London, Vienna, Lisbon, Madrid, Zagreb), which is pretty normal nowadays. For this reason, it’s just important that you have overlapping working hours and a solid internet connection – the rest can be done by call and via screen share on Skype, Slack, and so on.

In terms of software, we always use the tools that our artists are most comfortable with. Rang-tan was animated and coloured in TV Paint, composed in After Effects, backgrounds were made in Photoshop, guides created in Cinema 4D, and VR explorations in Quill. The black and white scenes are a mixture of rendered assets in Cinema 4D combined with animation done in After Effects and TV Paint. 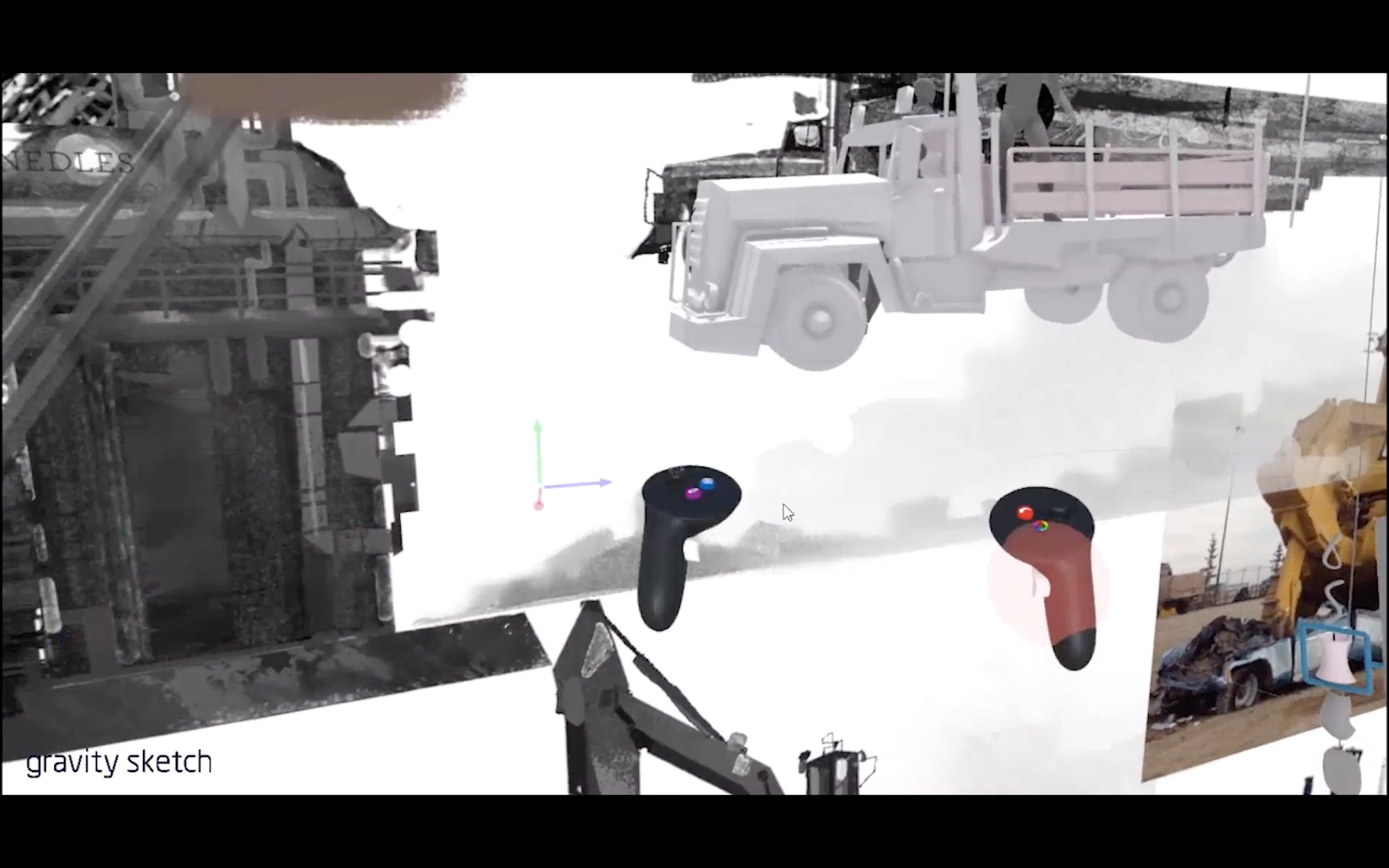 As well as delivering the spot, we also created assets for a printed book that was circulated. It was a big success considering just how many people watched it in the past month, and it was also a creative success – it turned out even better than what we had promised in the pitch. The fact that Iceland jumped onboard and helped Greenpeace to raise the awareness for the palm oil consumption problem was a great move. We actually didn’t know about UK broadcasting rules, so the ban caught us by surprise.

“It’s hard to use real footage to raise awareness for a cause like this. Animation gives us the chance to lead them closer to our message.”

The biggest challenge on this project was walking the thin line between telling the harsh truth of reality, but being careful not to scare off the audience. We had some pretty graphic moments in the animatic that we toned down in terms of violence, to focus solely on the industry of palm oil production, rather than to blame forest workers for the orangutans’ fate.

It’s hard to use real footage to raise awareness for a cause like this in a commercial, as the audience tends to reject it if you tell them they are part of a situation they are not directly responsible for. We think animation gives us the chance to slowly lead an audience closer to a difficult message. 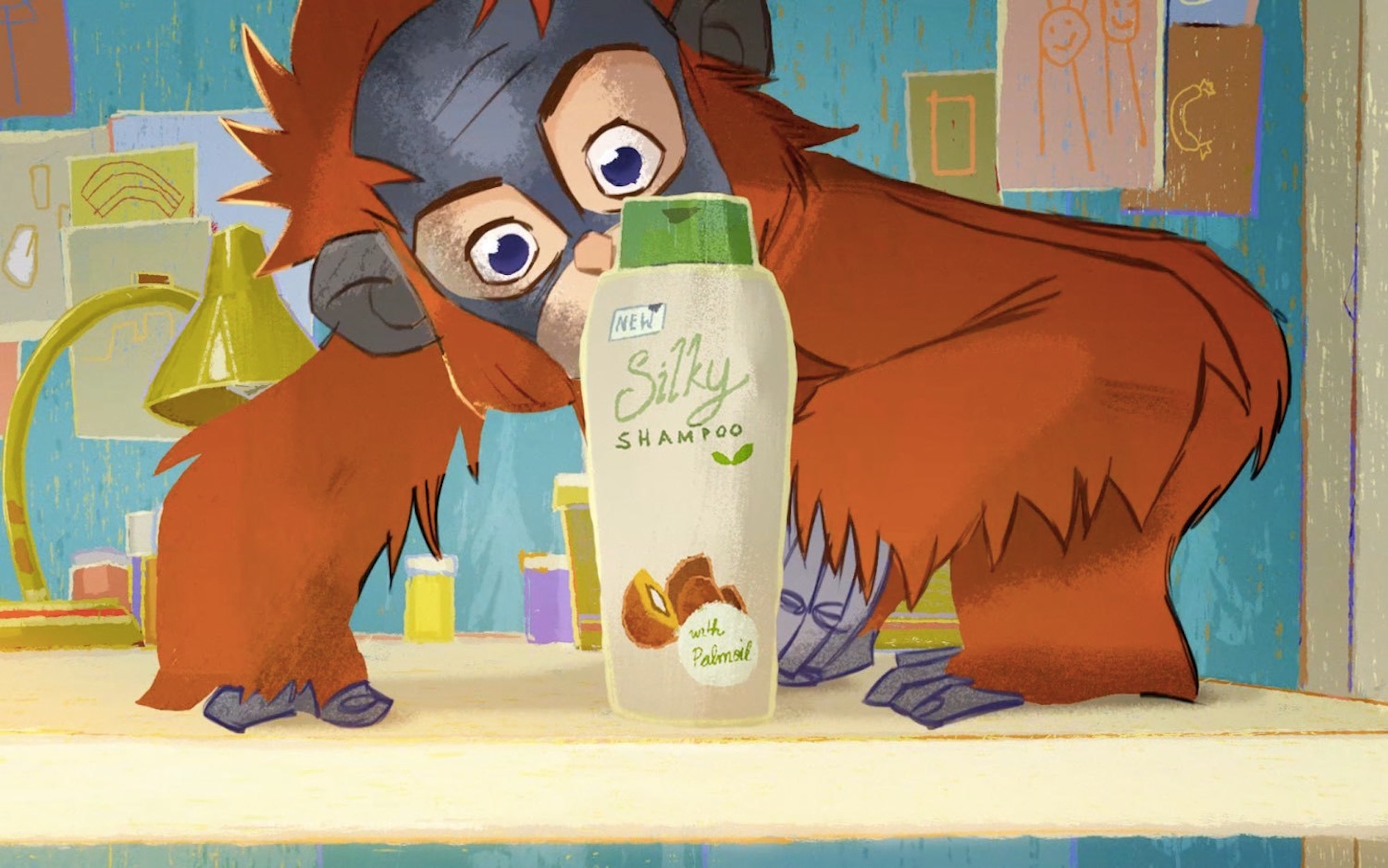 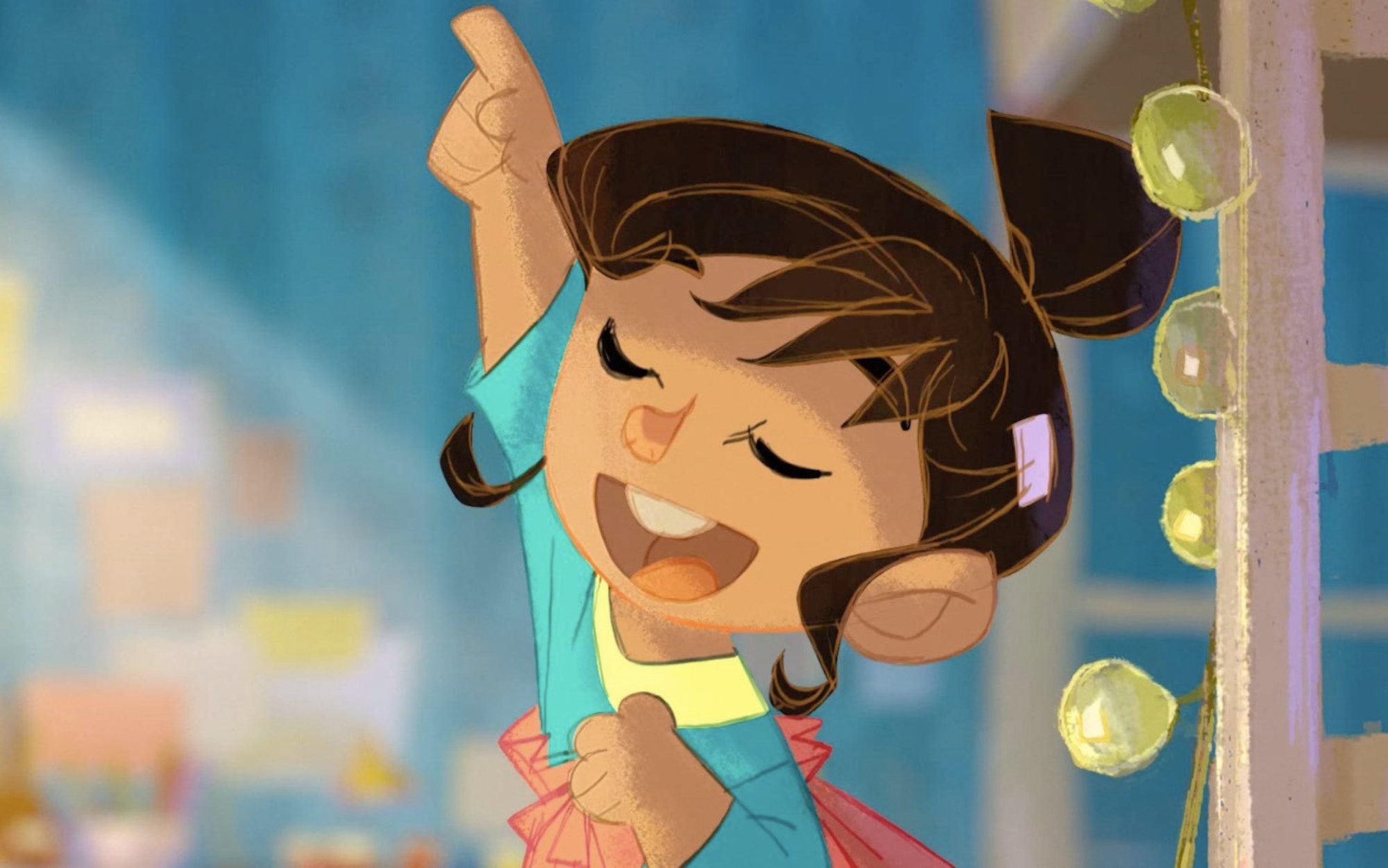 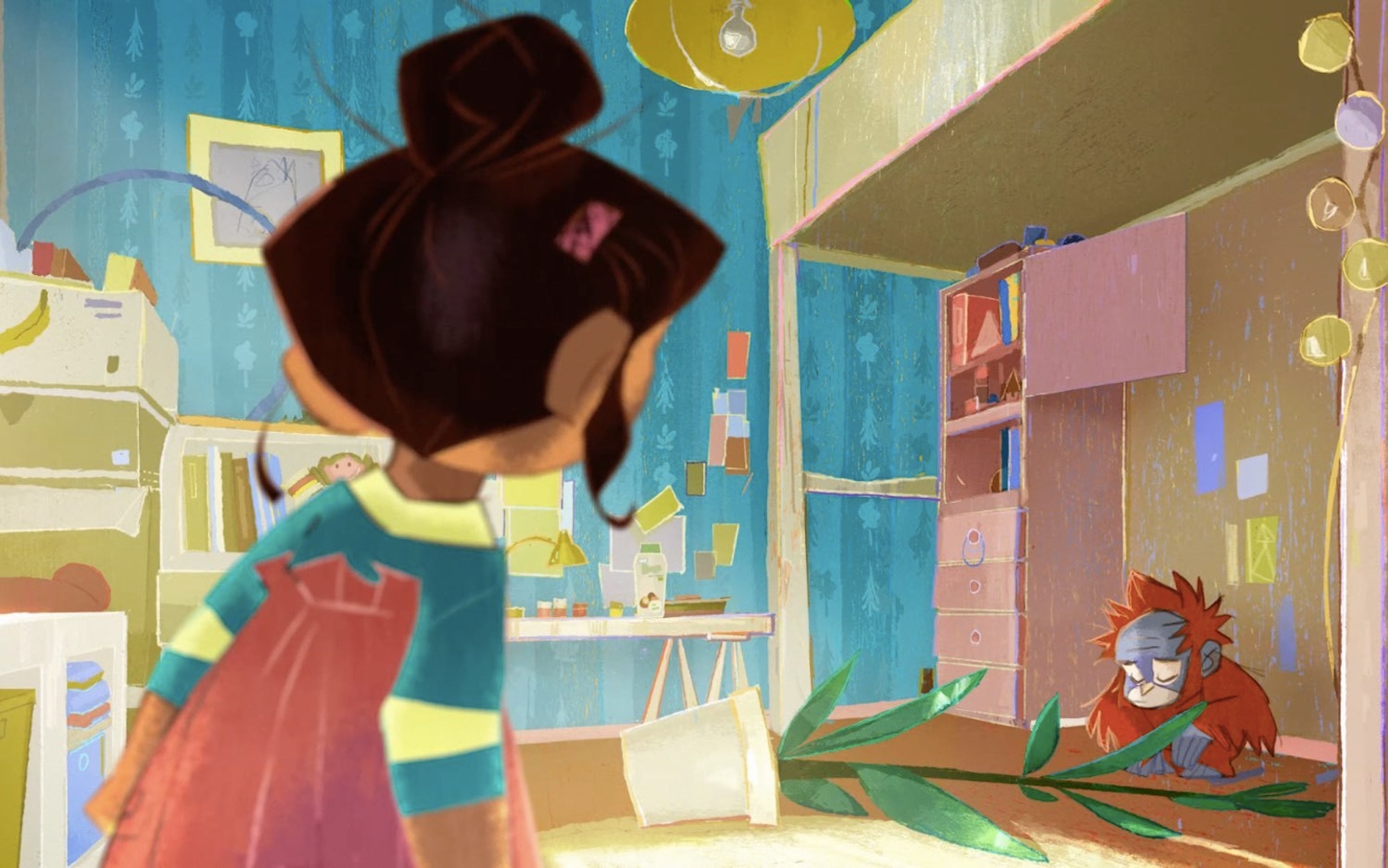 How Toaster developed a Progressive Web App for the Natural History Museum, inspiring kids to get outside