While some of her fellow filmmaking students were living it up at pubs and parties, Rina Yang was busy acquiring real-world experience – joining the ranks at “blokey” camera departments to absorb every technical detail of her trade as an assistant. It was a move that allowed her to shoot to DOP status within three short years of graduating; a feat many can only dream of achieving after a decade in the industry. She’s defined the look and feel of video pieces for clients such as Channel 4, Under Armour, Bose and recently collaborated with FKA Twigs for her much-hyped Nike commercial ‘Do You Believe in More?’. With an upcoming Kendrick Lamar music video under her belt, we caught up with the eternally busy Rina across continents, as she shot a new project in Mexico, to talk earning trust, exceeding your director’s expectations and staying healthy to counteract “brutal hours on set”. 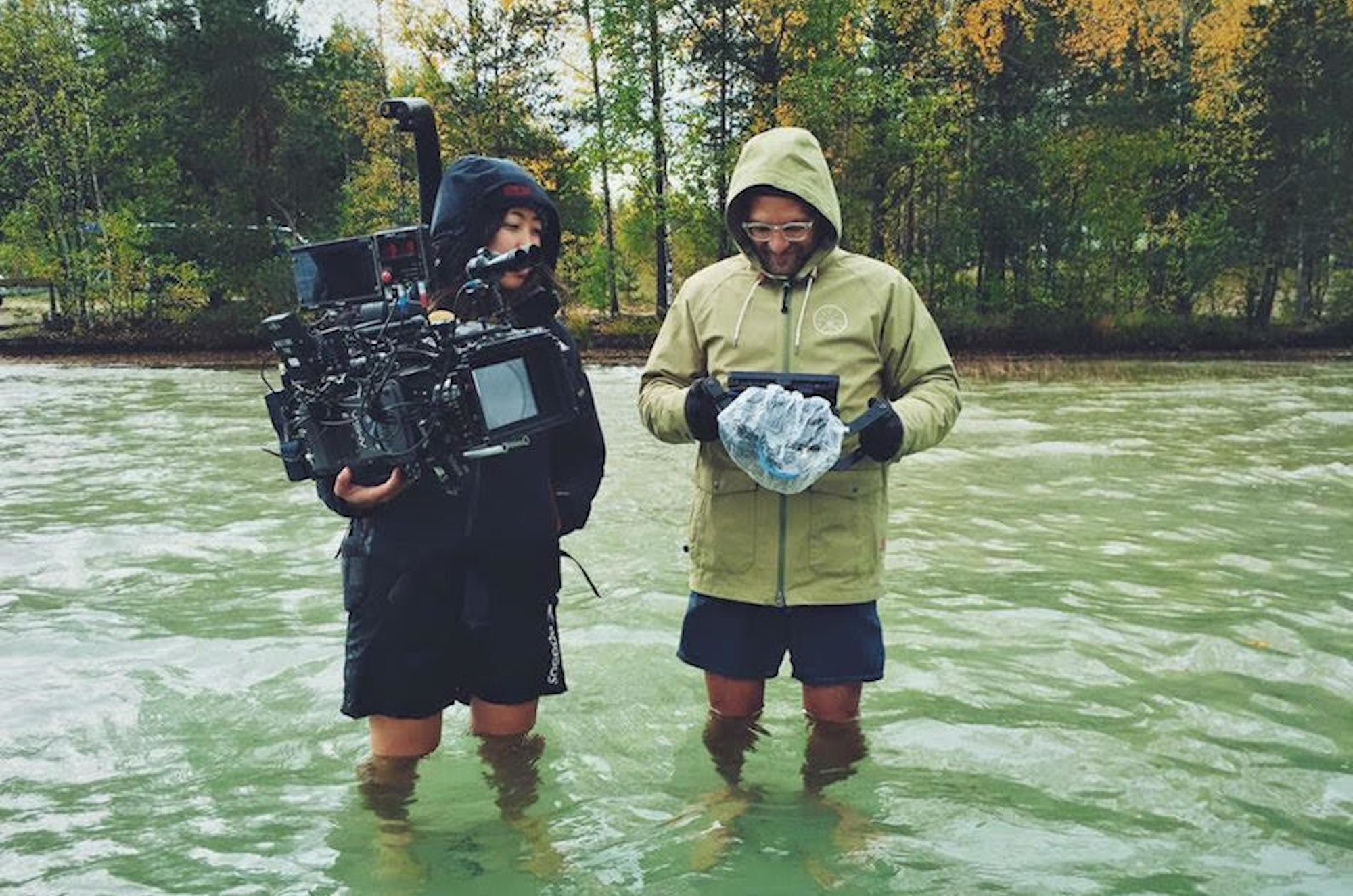 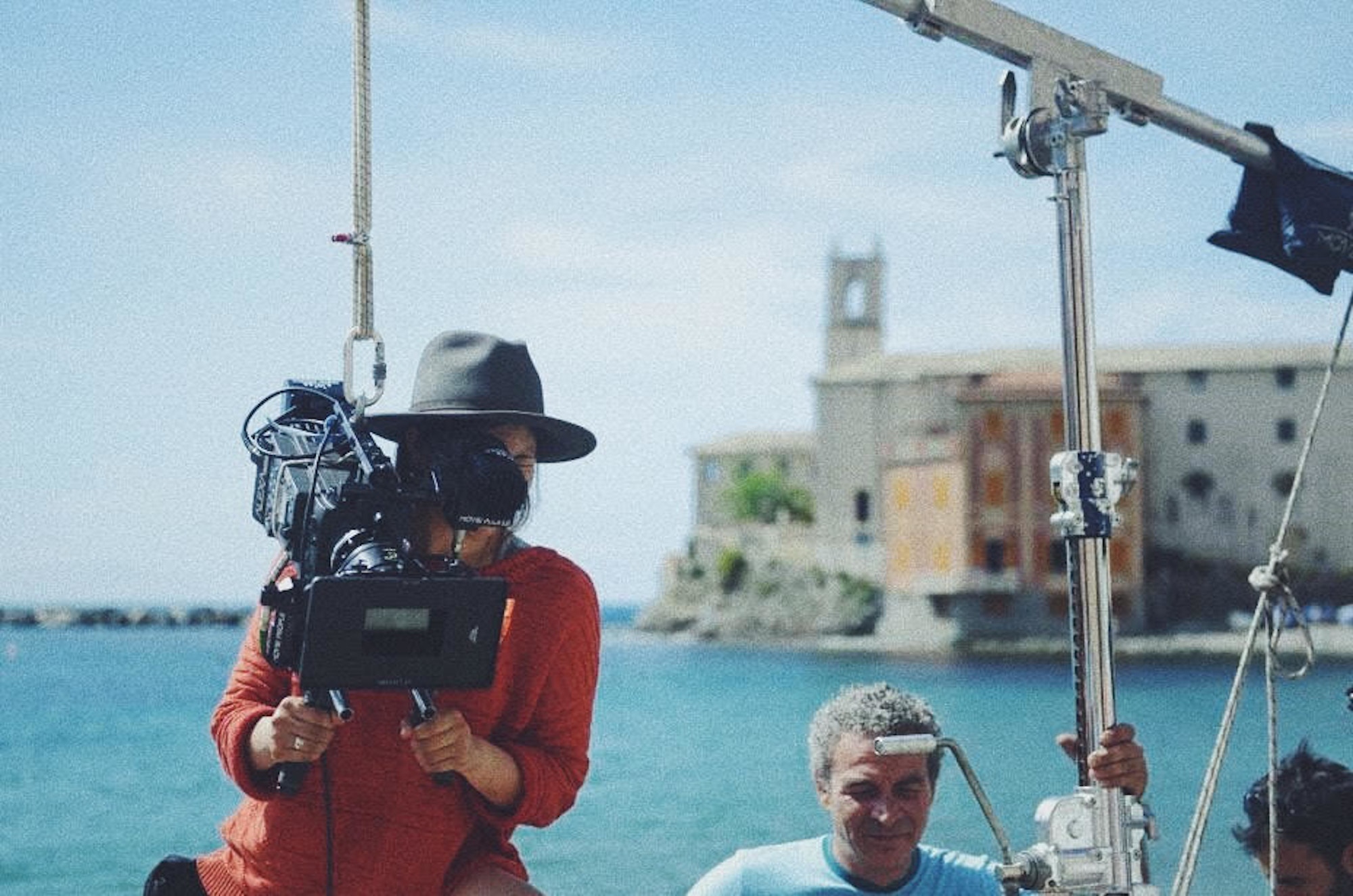 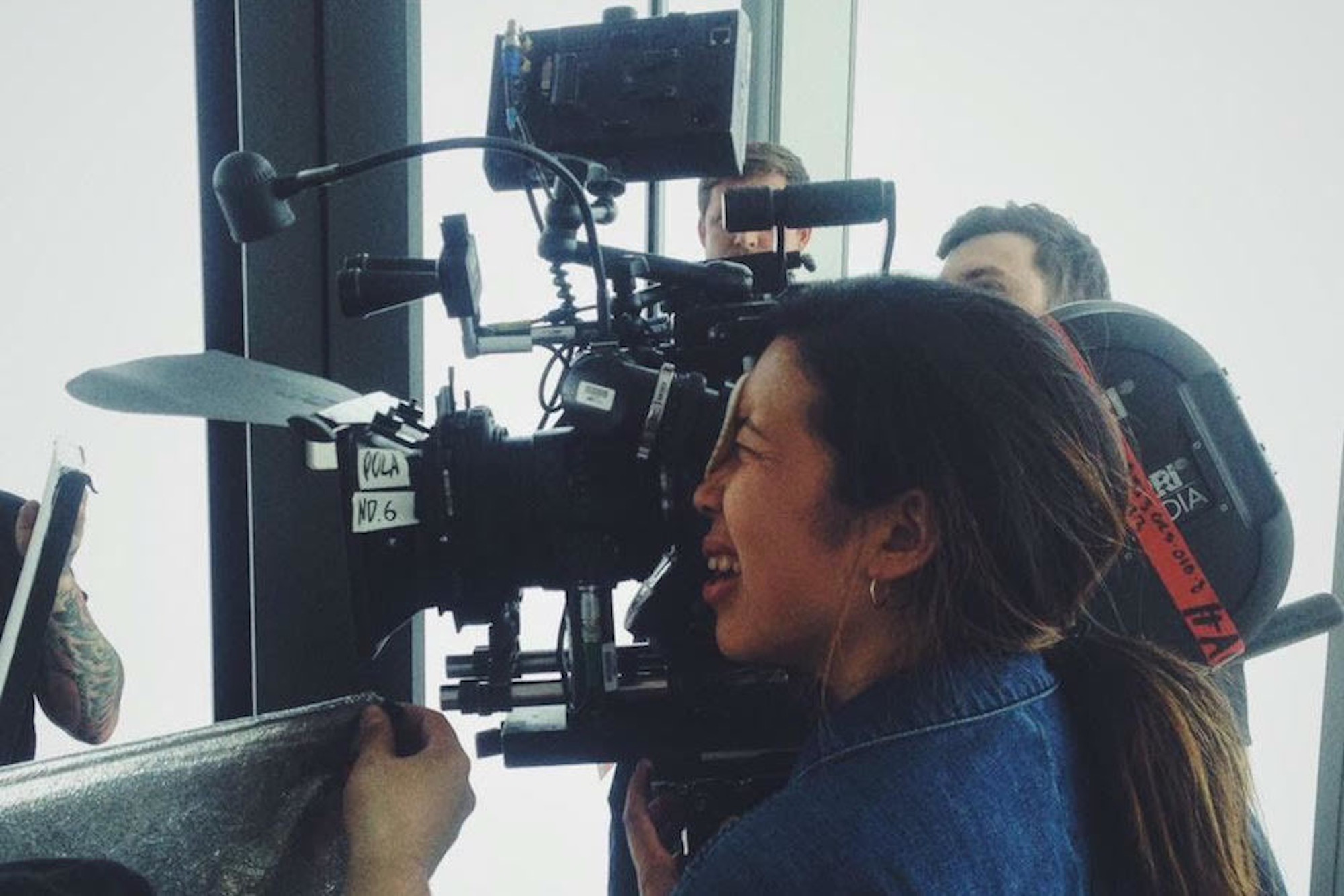 How would you describe what you do?
I work as a director of photography, mainly on commercials and music videos at the moment, but I also shoot narrative projects.

What does a typical working day look like?
If I’m shooting, I could be on my feet for 12 to 19 hours a day, door-to-door. When I’m not shooting, I’m either: catching up with admin, reading new scripts or treatments, attending a colour-grade session, meeting directors or producers for a chat, checking out art or photography exhibitions, going to the cinema, or prepping for a shoot. I also go for long walks with my dog and to yoga classes when I’m not shooting. You need to be fit and healthy in order to survive the brutal hours on set!

Where does the majority of your work take place?
My work takes place all over – we might shoot abroad or in the UK, either on location or in a studio.

How does your work usually come about?
Mostly word of mouth. I’m quite active social media wise, and regularly post what I’m up to or what’s just been released. Other than that, my agents put me forward for jobs when there’s something that they think would suit my style.

“Traditionally people can spend up to 10 years trying to become a DOP, but our generation seem to want something in a very short amount of time.”

How collaborative is your work?
Very; it’s 100% collaboration every step of the way and I love that. I talk a lot to my gaffer about the look and and the type of light I’m trying to create, and try to communicate with costume, hair and makeup. I also work as closely as possible with my director and production designer. Less so with my focus puller until we are on set, due to the fact that the camera’s a bit more straight forward in prep – it only tends to be the lens or the camera that changes between shoots.

What are the most and least enjoyable aspects of your job?
The most enjoyable is when you’re working on a challenging project that you’re in love with, with a director and crew you love and trust. You can really push yourself beyond the comfort zone to make something creatively rewarding. The least enjoyable aspect is book keeping and realising how much tax I have to pay. This is bane of my adult life!

What skills are essential to your job?
Communication, management, research and having good taste when making creative decisions. Picking the right crew and ordering the appropriate gear is important. I’ll also make sure my crew are lovely, decent human beings. How your crew behave reflects on your reputation, so you’ve got to be careful. I also need to relay any information from the production team to my crew, and make sure I deliver the look within budget.

What tools do you use most for your work?
A light metre, view finder and a laser pointer. I use a digital stills camera to check exposure. I mainly shoot on an ALEXA [camera] or film, if it’s right for the project. I don’t really like RED cameras, so I avoid them where I can, although I do use one occasionally.

What’s been the most exciting project of the past 12 months?
The first one would be the Nike FKA Twigs commercial, and another would be a music video I shot for Kendrick Lamar recently for his new album –  that was cool.

“I thought, you have to do it to learn it – you can’t just imagine what it’s like to be on set. I was working while my friends were partying.”

What did you want to be growing up?
I wanted to be a florist, a vet, a farmer, a news reporter, then somehow ended up working as a DP!

How (if at all) is the subject you studied useful to your current role?
It’s not directly linked, but for what I do, every and any education or life experience is useful. I think you need to be a rich and colourful person in order to create interesting work that will resonate with an audience. I studied a really general filmmaking course, and I kind of went to film school because I needed a reason to stay [in the UK]. It was mainly theory, and it wasn’t very practical; we literally had only two weeks of cinematography, so we didn’t learn much to do with cameras. I think I just fell into my role, because there’s no clear path for anyone to become a DP. Everyone does it differently.

What were your first jobs?
I’ve never worked for a company. I’ve done some part-time jobs, like waitressing at a restaurant but I was pretty awful at holding a tray properly. I started working as a camera assistant on short films and smaller projects while I was studying. I thought, you have to do it to learn it – you can’t just imagine what it’s like to be on set. I was working while my friends were partying – I wasn’t very sociable, I have to admit. I learned the basics as a camera assistant, but I didn’t like the blokey-ness of the camera department. I just enjoyed working with my director on the creative side of things and managing my team – rather than worrying about which screw goes on which camera plate.

Was there anything in particular that helped you at the start of your career?
It really wasn’t just one person, it was bunch of people that helped me when I was always asking for favours. As I had worked for free as a student, I had a few connections already when I finished film school. It started with smaller projects, but slowly I started to be put on bigger projects. I think that was good head start – a lot of my friends spent two years doing freebies after they graduated. From there I started to pick the people I liked working with and I tried to stick with them.

That just kind of snowballed into being a DP – it probably took me two years to transition. My friends who were AD-ing [assistant directing] or running started directing little music videos and would ask me to shoot them, because they knew I could do a bit of camera as well as lighting. Then I just tried to establish myself as a DP after that. Traditionally people can spend around 10 years before stepping up to be a DOP, but our generation seem to want something in a very short amount of time.

“I’m not white or male, and I’m not even British, so I guess I’m like a rare Pokemon character – not what people expect. It’s not nice that people’s attitude change once they realise that you’re a DP. You shouldn’t treat anyone any differently based on their roles.” 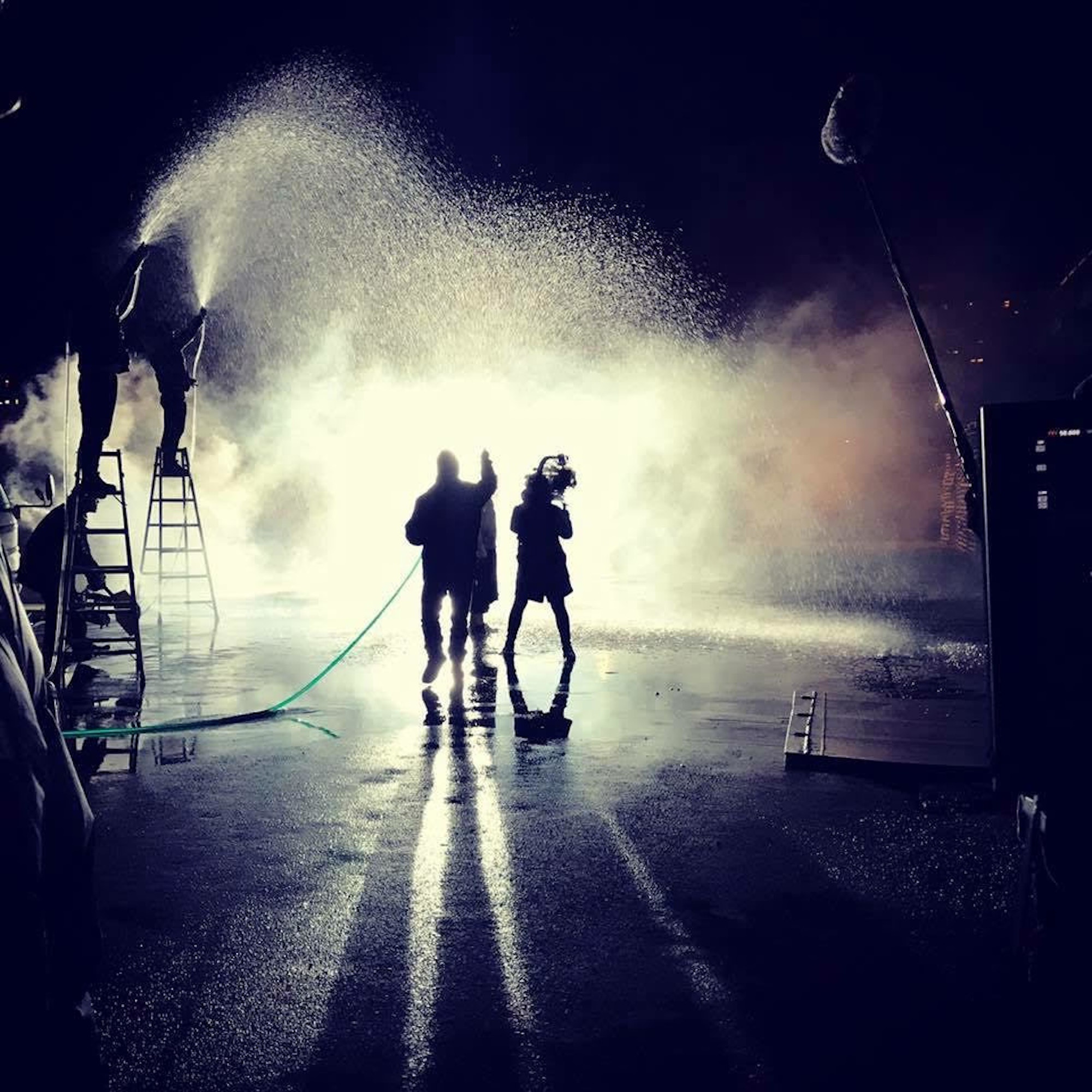 What skills have you learnt along the way?
Aside from technical skills and skills directly linked with cinematography, one of the most valuable things I’ve learnt is how to deal with people. You have to be reliable, diplomatic, precise, concise, and there is no room for egos. Also, write your work emails as if they will end up on a billboard or be read by millions of people one day. It’s important to know email etiquette; it’s the main communication tool for work these days.

What’s been your biggest challenge?
Earning people’s trust. When I show up on set, 90% of the time people would assume I’m something other than a DP. It can be funny, but sometimes it’s super-awkward! I often get escorted to SA dining bus or Art department area. I’m not White or male, and I’m not even British, so I guess I’m like a rare Pokemon character – not what people expect. It’s not nice when people’s attitude change once they realise that you’re a DP. You shouldn’t treat anyone any differently based on their roles.

Is your job what you thought it would be?
To be honest I didn’t know what I was getting myself into. I just wanted to shoot things that I liked, so I feel very lucky to have ended up with this job.

Could you do this job forever?
Yes. I cannot think of a better job.

What do you feel is the natural career progression for someone in your current position?
To shoot long-form narrative projects. 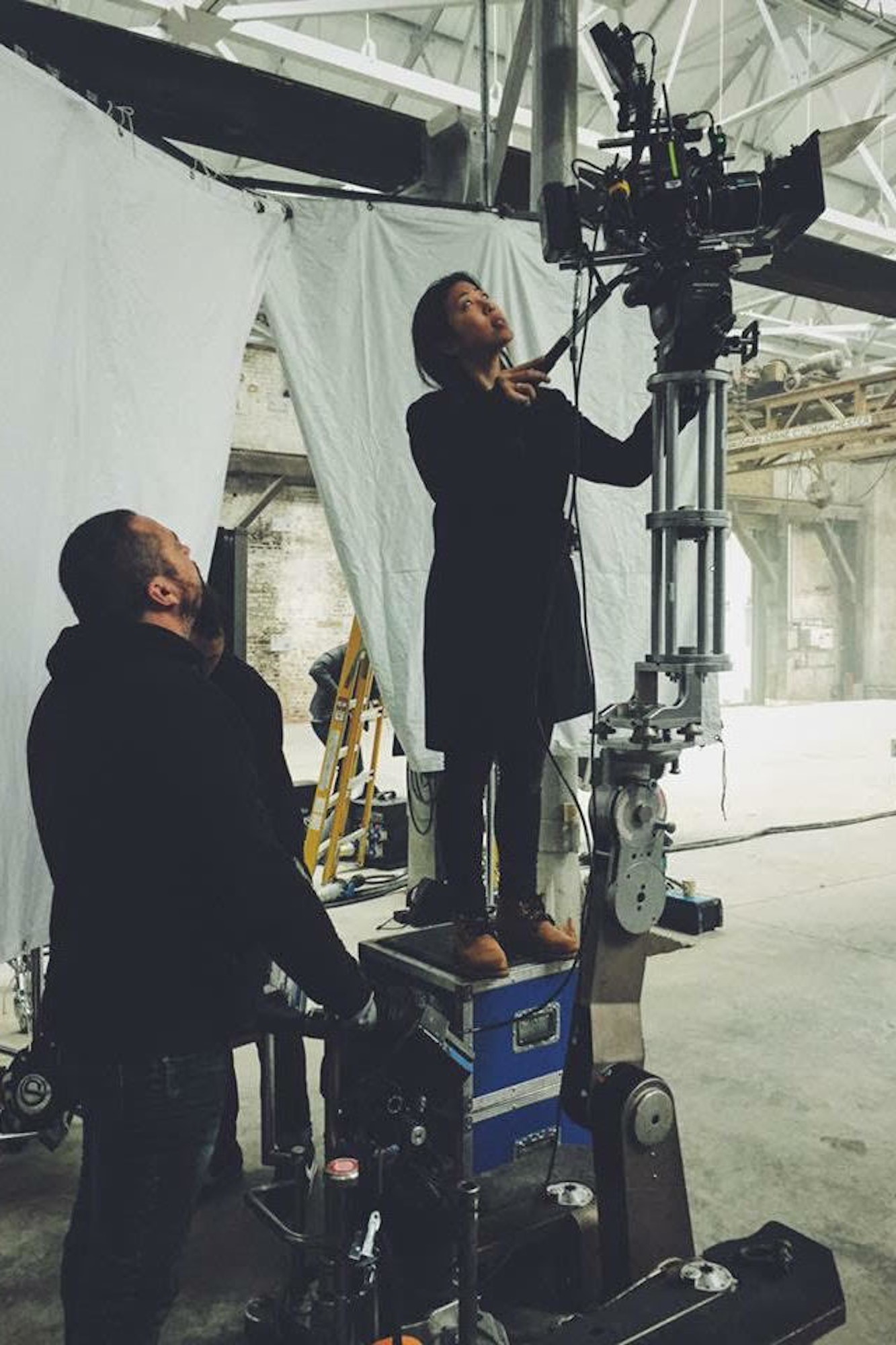 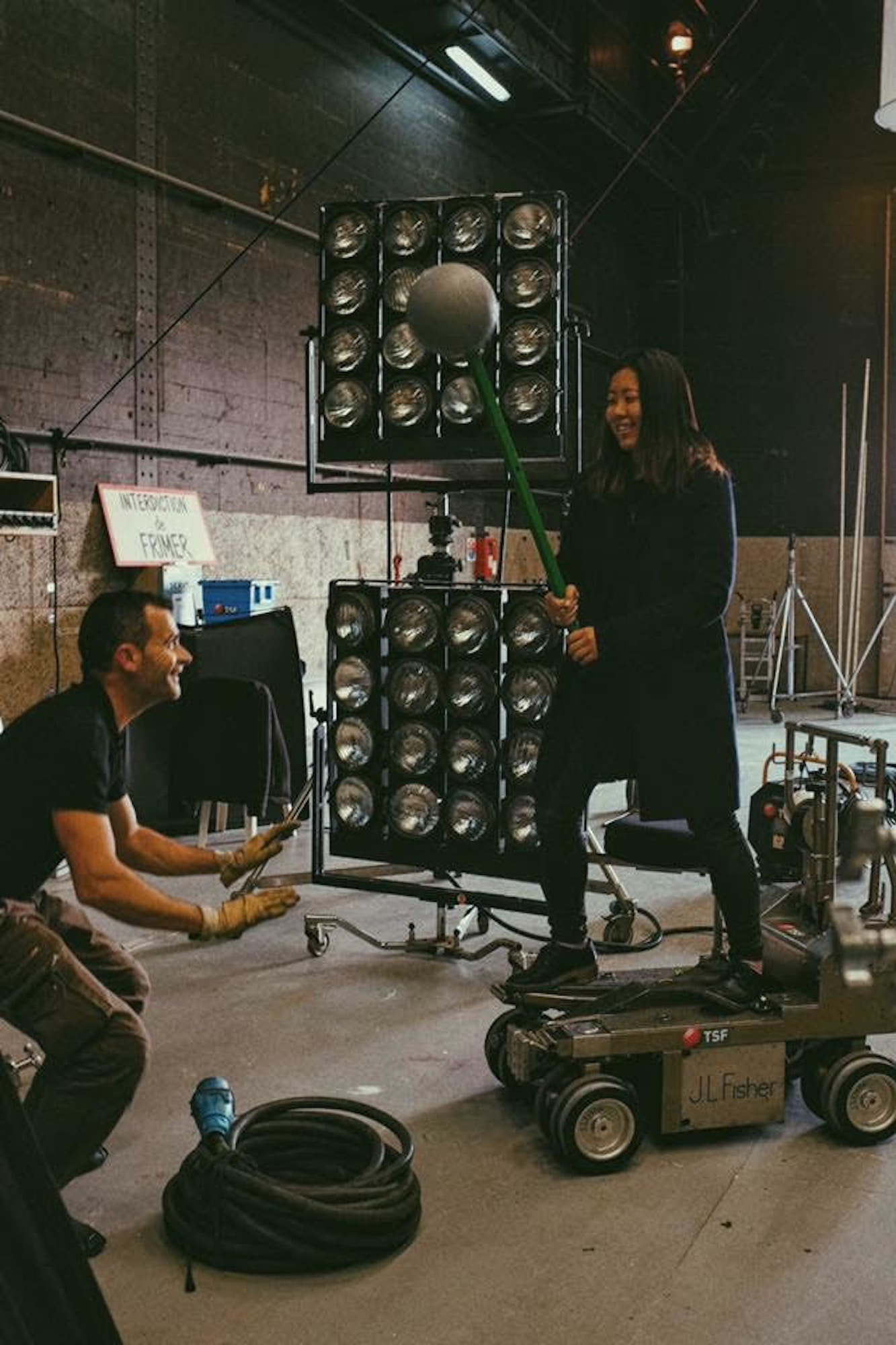 What advice would you give to a young creative wanting to become a director of photography?
Follow your heart, not the money. If you can have side jobs or income to support yourself while you build up your reel that’ll be ideal. I used to do camera-operation jobs for TV programmes and events when I was starting out as a DP, to support myself financially. Surround yourself with the people and friends who inspire you. Dedicate yourself fully to a project you believe in, work hard and do your best. Support and collaborate with your production team, crew and the director. Exceed your director’s expectations. Put yourself out there, promote yourself – the internet is great for that.

From band mate to one-man studio: How Peter Duffy got into sound design and composing

Animator and filmmaker Will Anderson: “Animation is a life’s work – it’s movement”