Founded in 1961, the British Heart Foundation pumps hundreds of millions of pounds into life-changing research every year. Funding thousands of research projects to better understand the causes behind cardiovascular diseases, the charity is mostly reliant on public donations for support. With this in mind, last September, the team at brand consultancy Wolff Olins got to work on refreshing the BHF’s look. As part of this new identity, they called on Manchester-based graphic designer Rick Banks to create a typeface that would help reignite the BHF’s fundraising efforts. From digging deep into his inspiration folder to examining ligatures and licenses, Rick recounts the project stages, dissecting the decision-making process behind the new sans-serif, flow-focused font.

Create a sans-serif, headline typeface based on the idea of flow. It should be supplemented with alternative ‘flow’ glyphs which are programmed in automatically.

I have worked with Wolff Olins on and off since 2011, so we have a good relationship; it’s always a treat working with them. Dan Greene, their creative director, rang me up last September and said his team were working on an exciting job for a household name in the charity sector. They were creating an ambitious, distinctive identity to revive and reignite BHF’s fundraising and they wanted a new font to go alongside it.

“The font had to match this idea of ‘flow’. It needed to feel smooth and fluid.”

Wolff Olins had done some initial visuals using typeface designer Radim Pesko’s ‘Walt’ font. This ‘wavy’ font helped sell the idea to the client that a distinctive font was essential for the re-brand. There wasn’t a pitch per se, but I did a few early sketches for free to get the ball rolling.

Under Dan’s creative direction, senior designer Jack Grafton emailed through a detailed brief cc’ing the whole team in. The font had to match this idea of ‘flow’. It needed to feel smooth and fluid. Like all good projects, it evolved quite organically and the brief shifted a bit.

The British Heart Foundation's identity before the rebrand

I was excited when the brief landed and looked for inspiration straight away. When I graduated, I created a folder on my computer called ‘Inspiration’ and over the years, I’ve chipped away and added to it. Every project starts with spending hours rummaging through this huge volume of jpegs, full of wonderful design and typography. I also looked online and scoured through my book shelf before presenting three routes to Wolff Olins.

These were very rough sketches created in a piece of software called Glyphs. I’ve recently relocated to Manchester so this was done via PDF and email. When I was in London I would normally go into the studio and present the routes to the team. Thankfully modern technologies like Slack, WeTransfer, Skype and even WhatsApp make it so easy to work remotely. 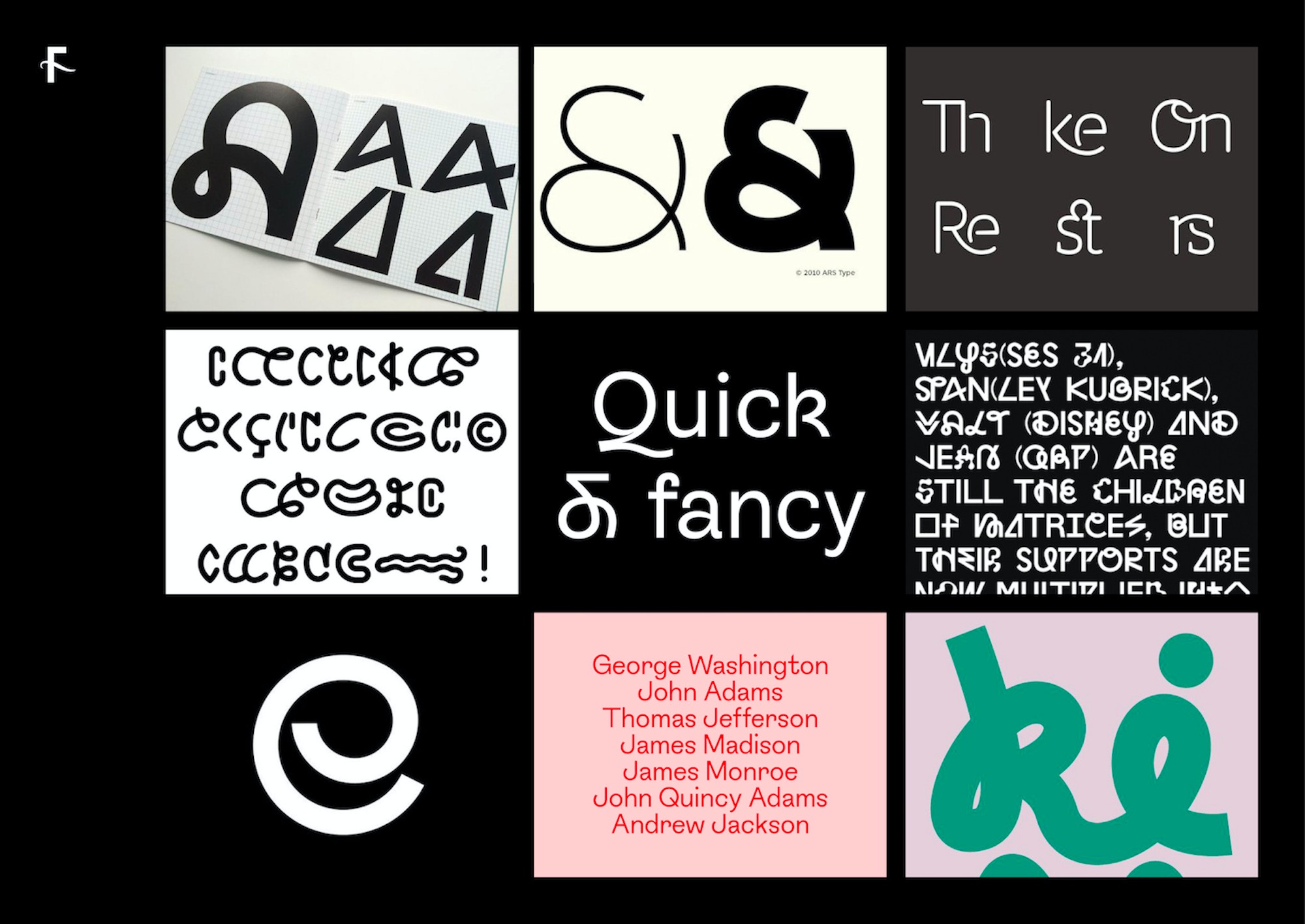 The initial visuals by Wolff Olins, which the client liked, were all set in uppercase. So I concentrated just on these characters to begin with. The first route was a geometric sans-serif, very subtly hinting at the BHF’s logo.

The second route was all about flowing decorative ligatures. Whilst these looked pretty, the general consensus within the team was that it didn’t create that sense of flow. They all looked quite static and individual. Being set in uppercase didn’t help them to flow naturally.

The third route also focused on ligatures, but in a more human and gestural way. As much I loved this route, I agreed with the team that it was too playful. Route 1 was ultimately the one we picked to develop, but we decided to incorporate elements like the T and S from route 3 into this. 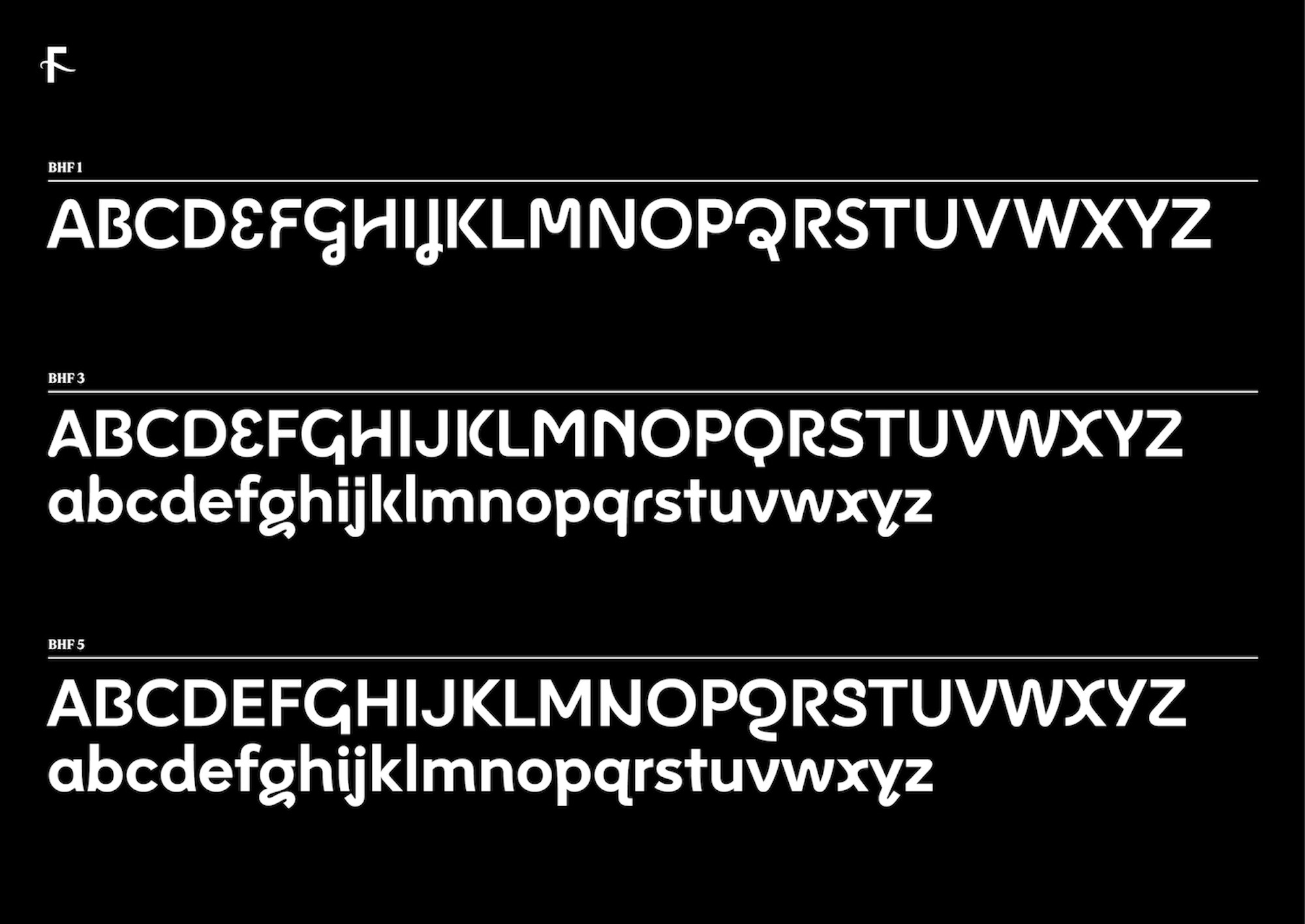 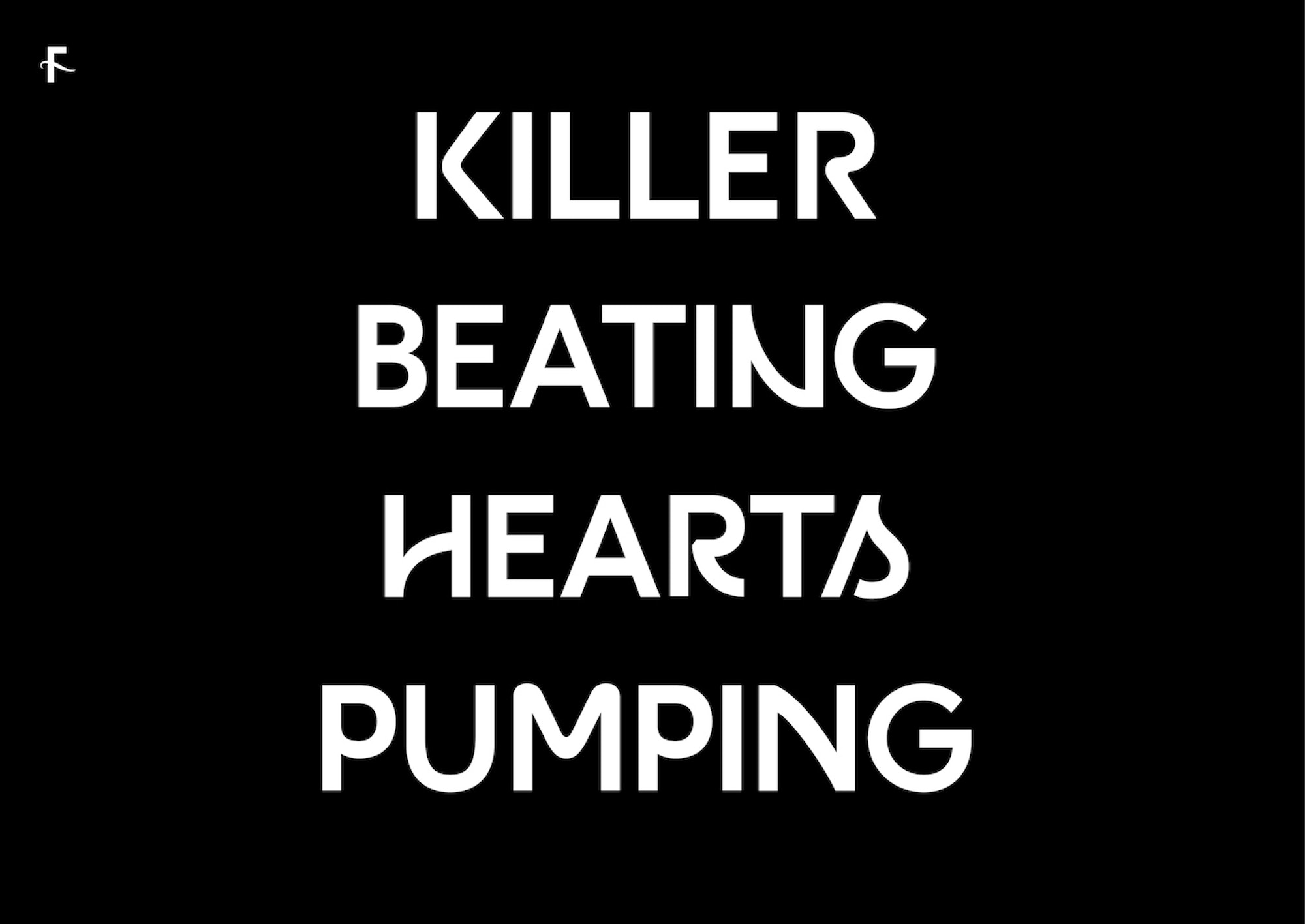 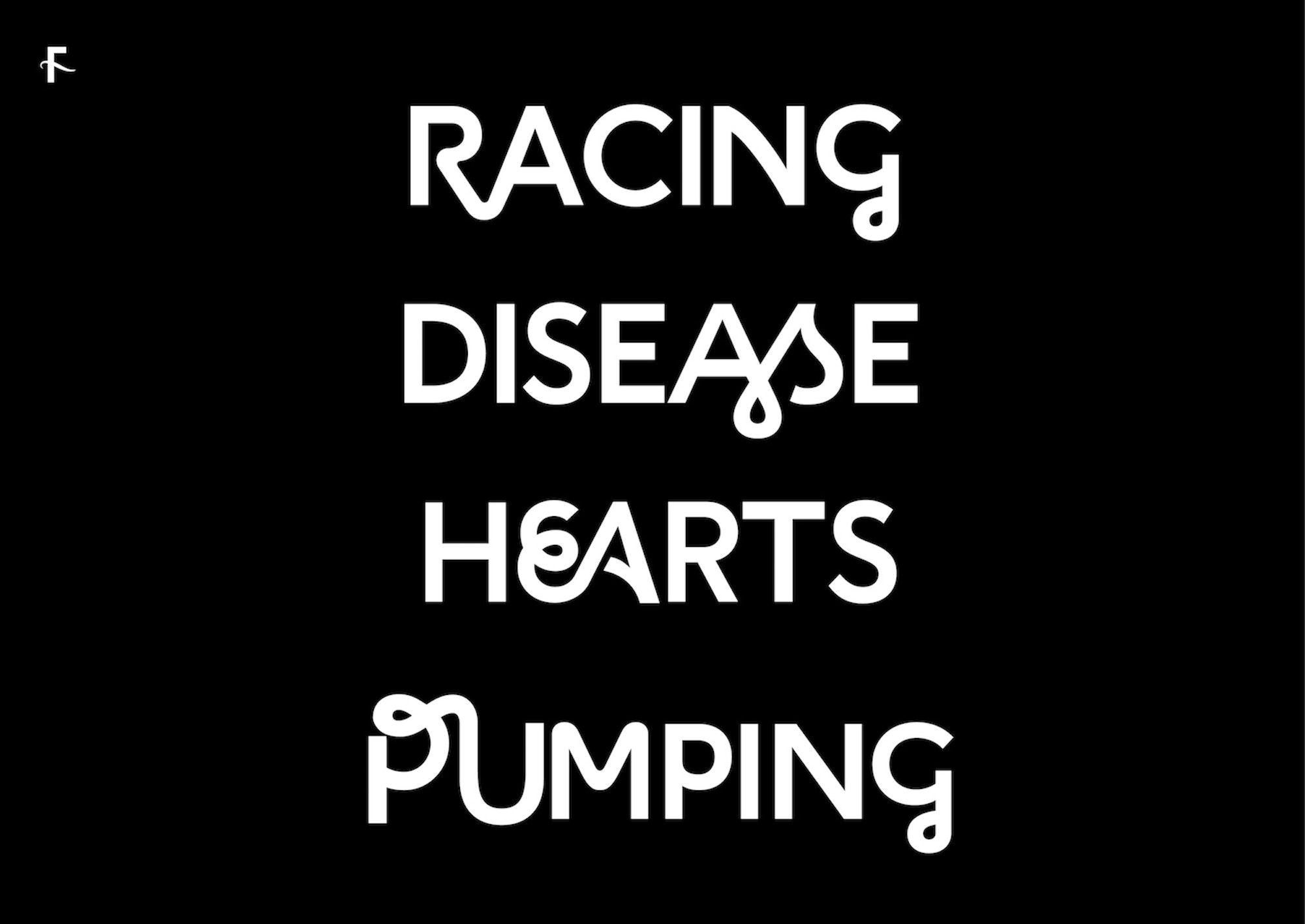 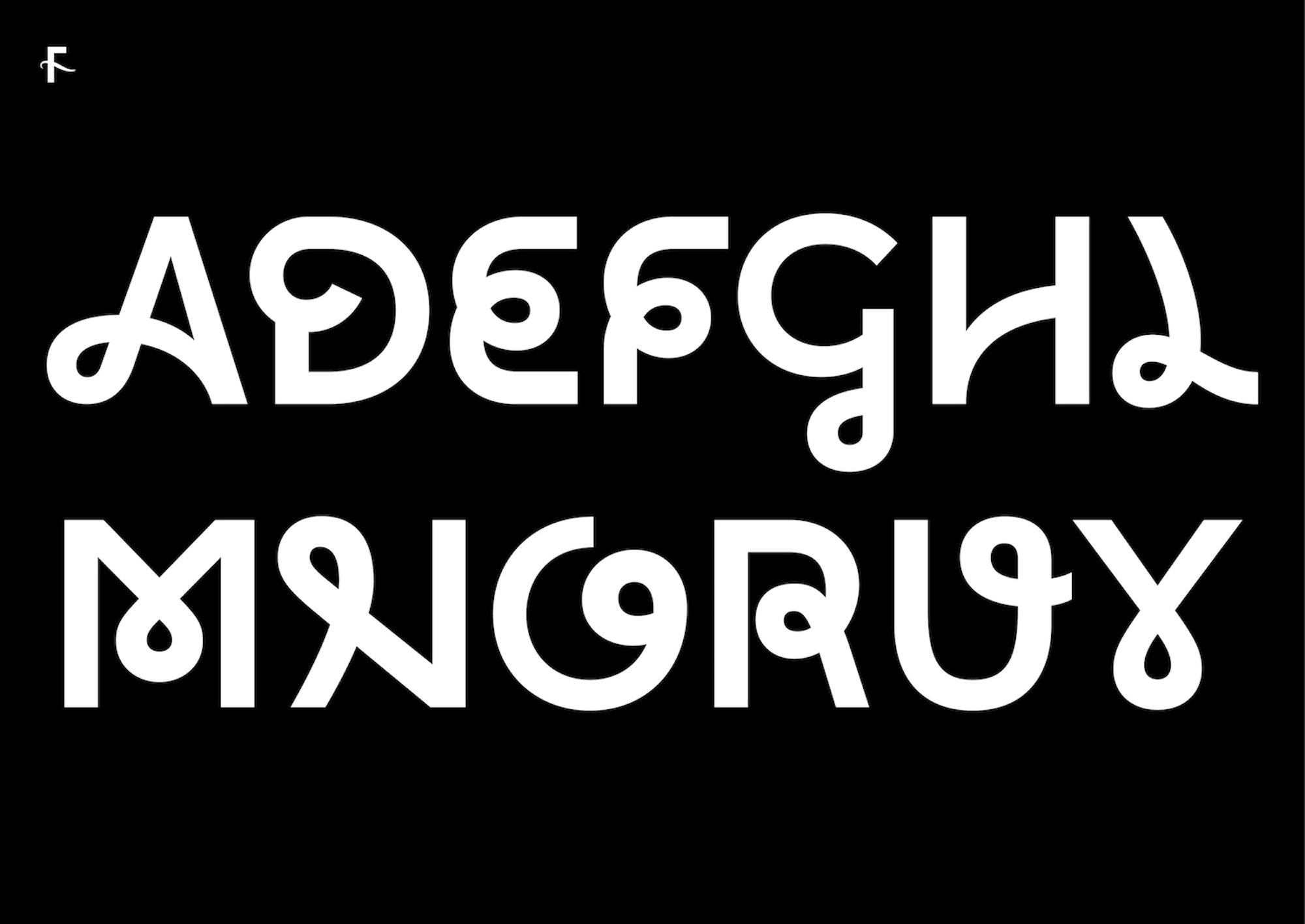 Route 2; decorative ligatures but didn't yet create that sense of flow 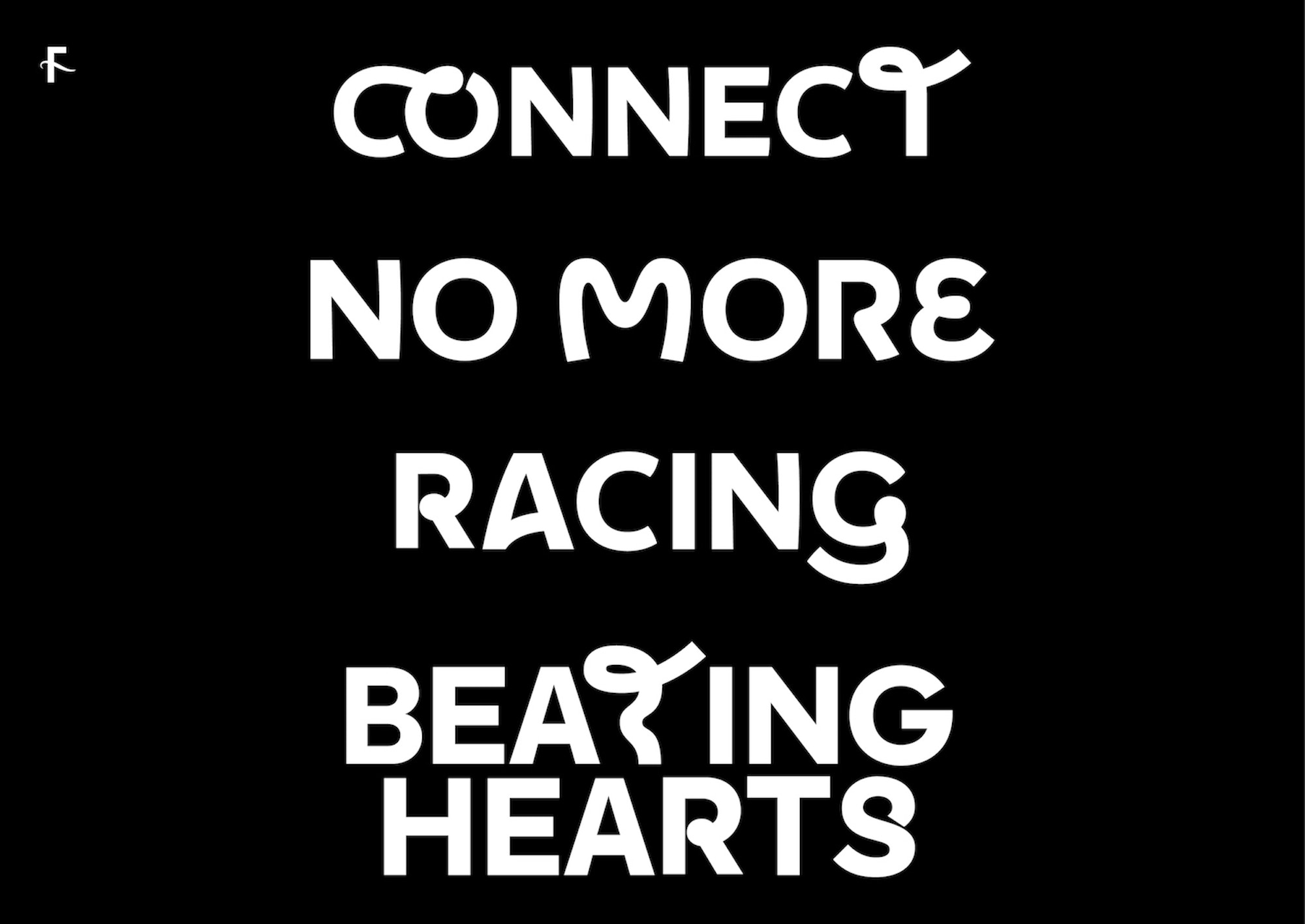 Route 3; also focused on ligatures but felt too playful 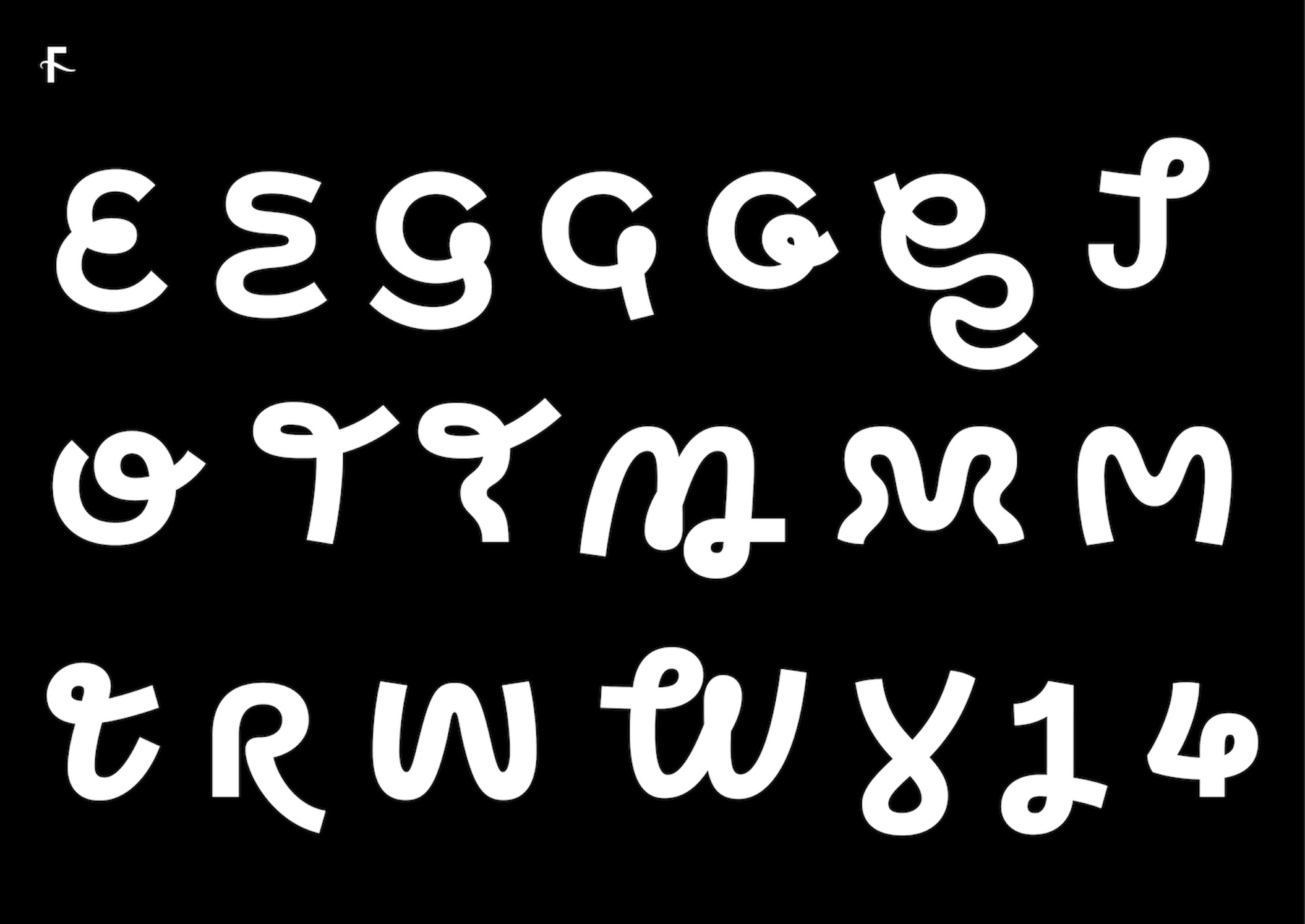 Route 3; also focused on ligatures but felt too playful

Going forward, we didn’t want to produce yet another geometric font so it had to be less subtle; it needed to have its own personality and charm. When I was developing route 1, I came across Karl Gerstner’s sketches for his Berthold font. In particular, his rough pencil drawings of the letters B and R. This was a big inspiration and a huge turning point.

After this I created the first beta font file (BHF 1) for Wolff Olins to play around with and place in their applications. It was only in uppercase at this point. Wolff Olins then presented it to the client who generally liked the direction and agreed to keep pushing it. I then got feedback from Wolff Olins saying it was too sci-fi and ‘NASA’ like. Again I agreed. It was also too shouty, set in caps. We needed to inject a bit more of the rounded edges found in from the logo, like in the leters B and R. The curly elements on the G, J and Q weren’t working either. It all looked a bit too serious. 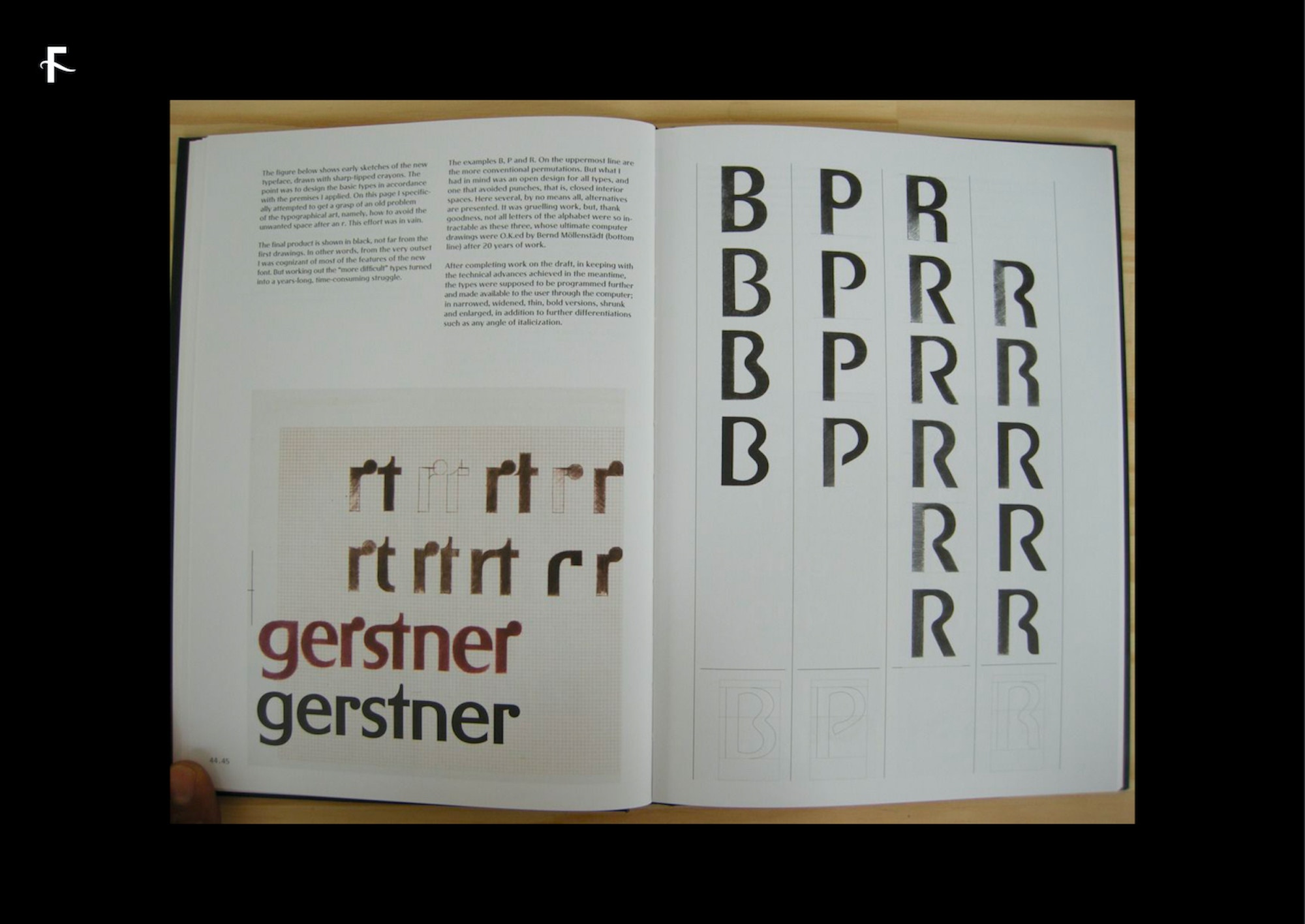 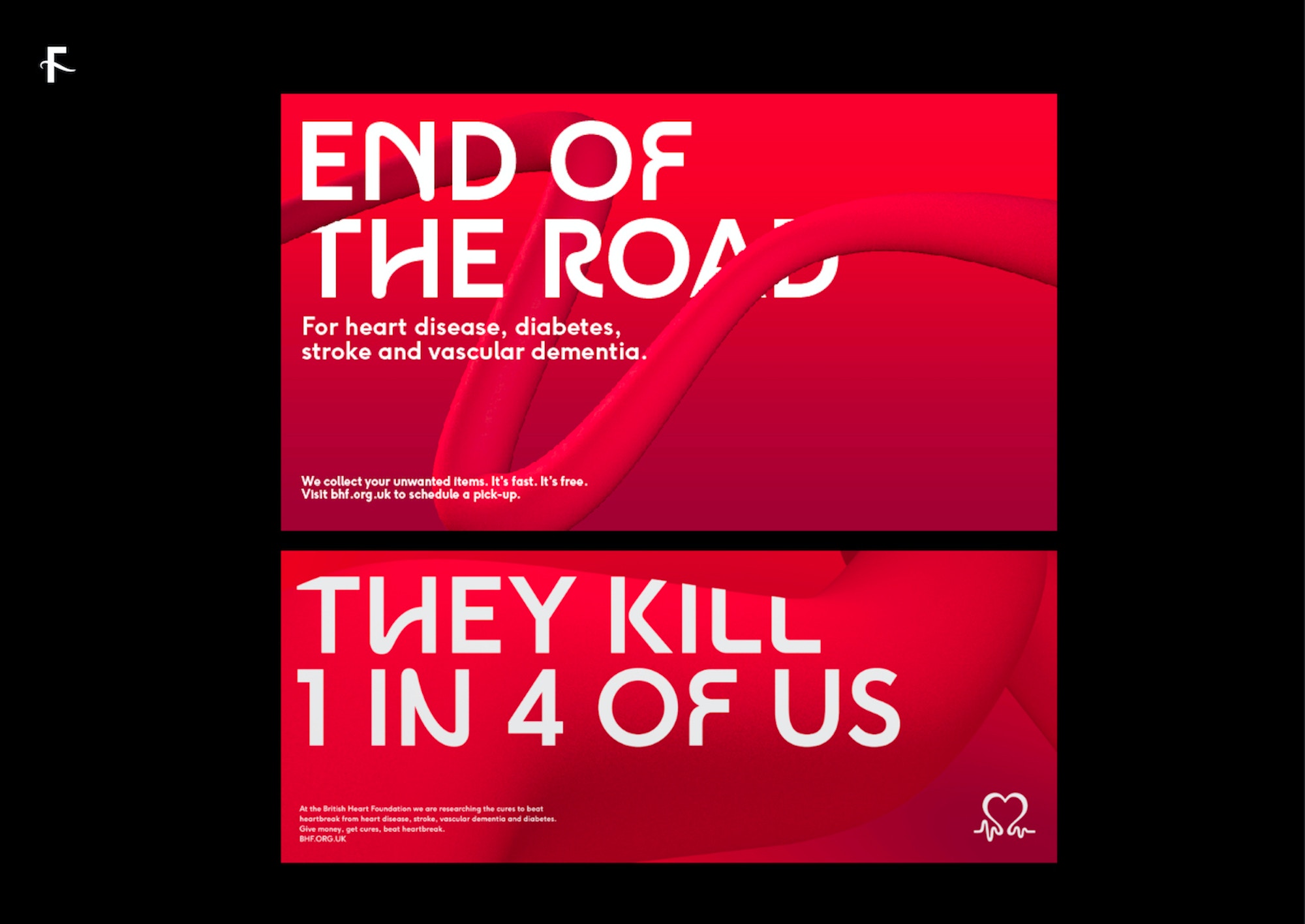 We kept pushing it, flipping letters, tweaking anchor points until we came to BHF 6. There was a real balance of the sans mixed with the rounded. It had the waviness of the logo. Dan was adamant that there should be movement in the all the letters. I remember not agreeing with him at the time, I thought it would be too much but he was right in the end. It needed that fluidity.

At this stage, Melissa Priestman (senior programme manager) introduced me to the client. I then liaised with them in regards to the font license agreement document. There is normally some back and forth between lawyers until both parties are happy and it’s signed.

“We kept pushing it, flipping letters, tweaking anchor points until we came to BHF 6.” 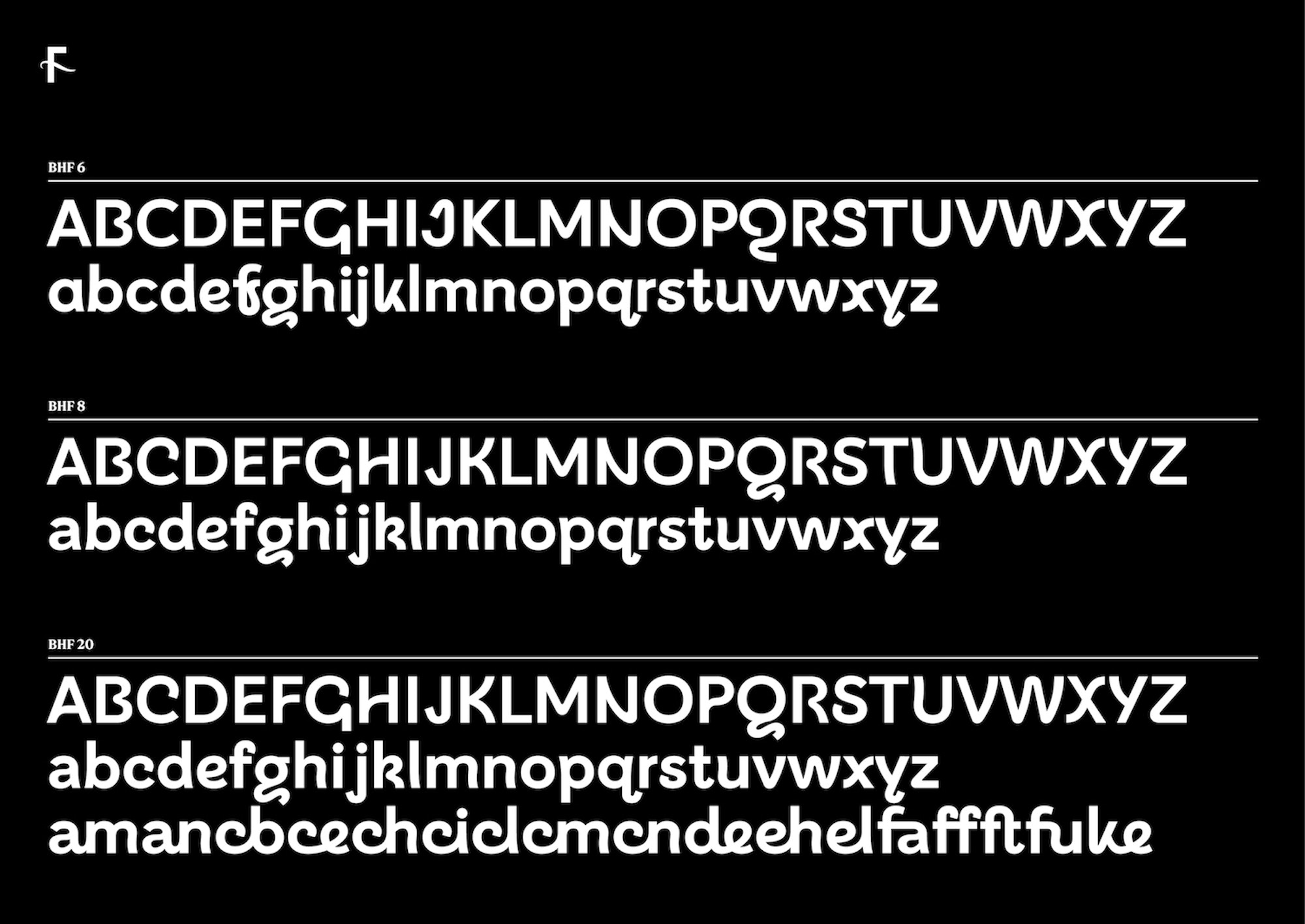 Once we were in a good place with the uppercase and lowercase Jack sent me a scamp [a first rough or mockup] of possible lowercase ligature combinations. We designed many of these and later coded them in using Opentype. These were way more successful than the original uppercase ligatures. We got rid of the ones that weren’t working and kept a good selection.

When going through the design process, the client liked a few of the letters that were drawn in previous routes, so we took advantage and decided to add some of them back in as alternates, as well draw some new ones. When the bold was signed off by the client the other two weights, regular and light, were drawn. 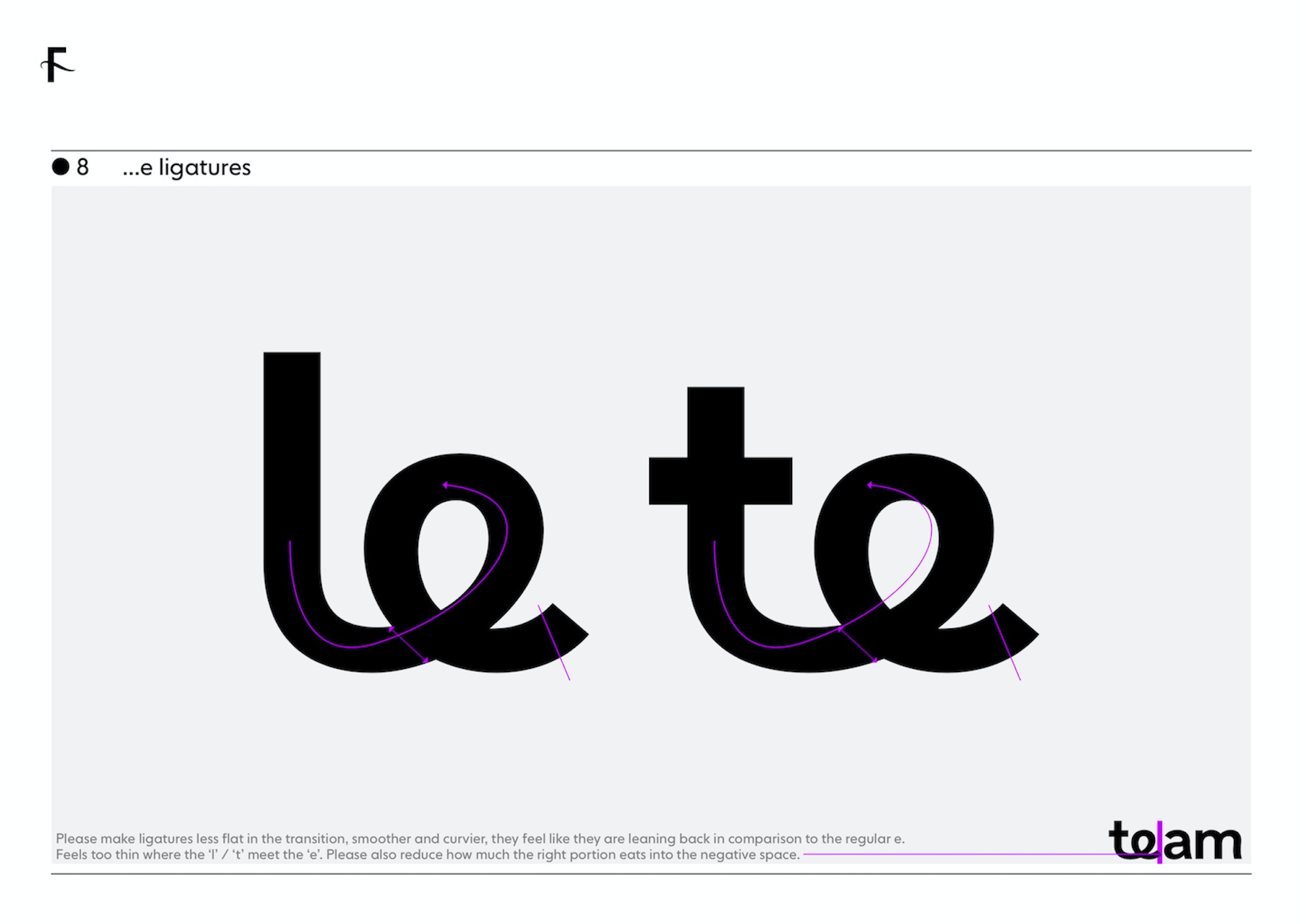 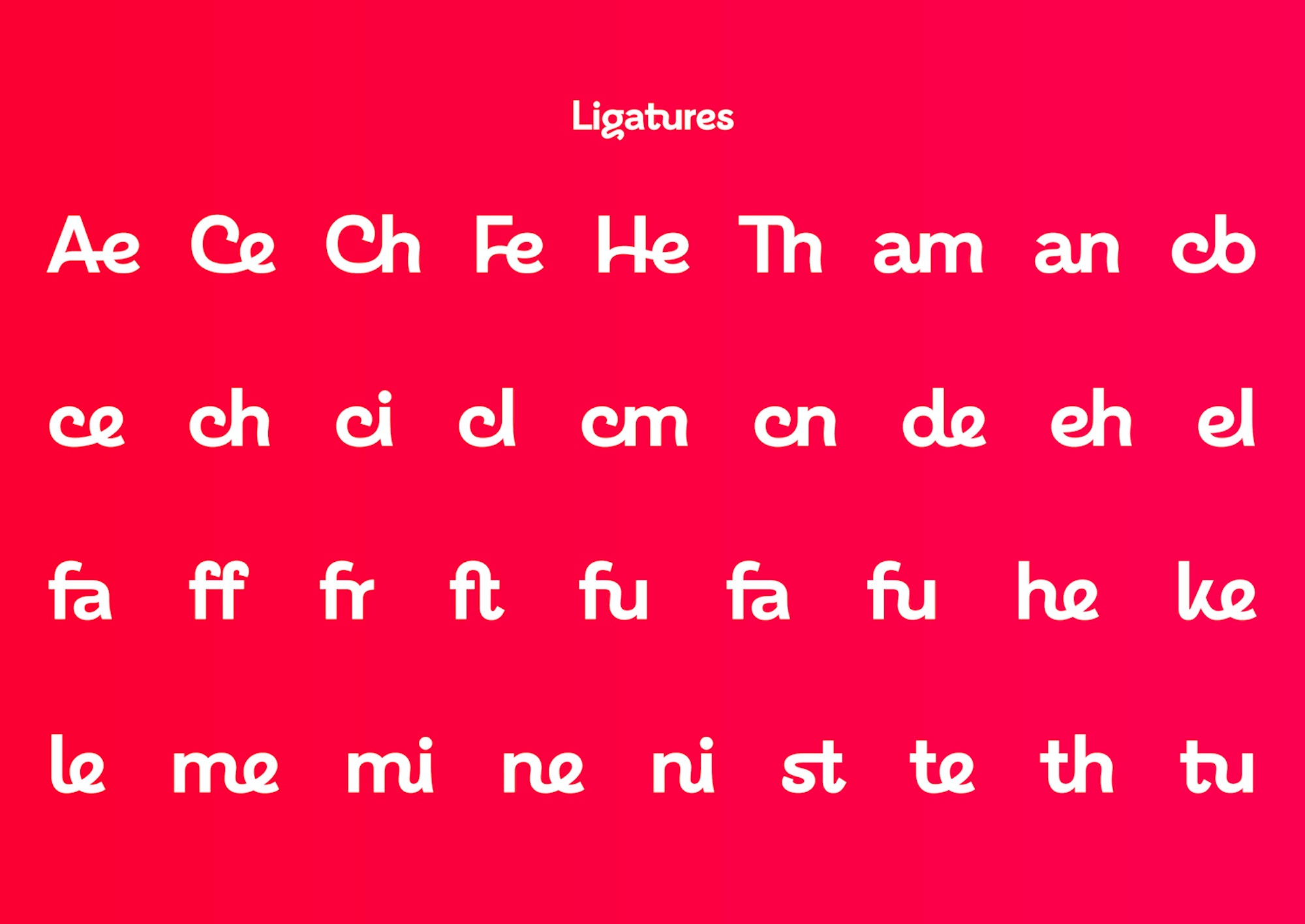 After four months and rigorous testing, the final digital files were delivered via email to BHF in multiple formats (OTF, TTF, WOFF WOFF2, EOT) for desktop and web use. In retrospect, it looks so simple looking back, but as Steve Jobs said, “It takes a lot of hard work to make something simple.” The more you work at something and invest the hours, the better the project becomes. That’s why we went through 24 rounds of amends!

“Ultimately, it will be a success if it helps BHF raise more money. A bespoke font gives a brand an asset they can really own.”

The British Heart Foundation identity before and after the rebrand

I did have to work a few weekends as I wanted as to put as much time and effort into the job as I could, being self-employed has its advantages and disadvantages. I remember working through detailed amends whilst I was on holiday for my wife’s birthday. Luckily she’s forgiving (she’s a graphic designer too, so she knows how it goes).

The reaction to the font has been amazing. The client was super-happy and I’ve had messages from internal BHF employees saying that it’s gone down well, and that the font will help them across brand consistency within their local teams. Ultimately, it will be a success if it helps BHF raise more money. The refresh should create more brand awareness, too. A bespoke font gives a brand an asset they can really own. This is powerful, as they can become as iconic as logos themselves. It is a badge of distinction and a bold statement of individuality. Hopefully, in time, people being will recognise the brand just by the typeface. That would be a success. 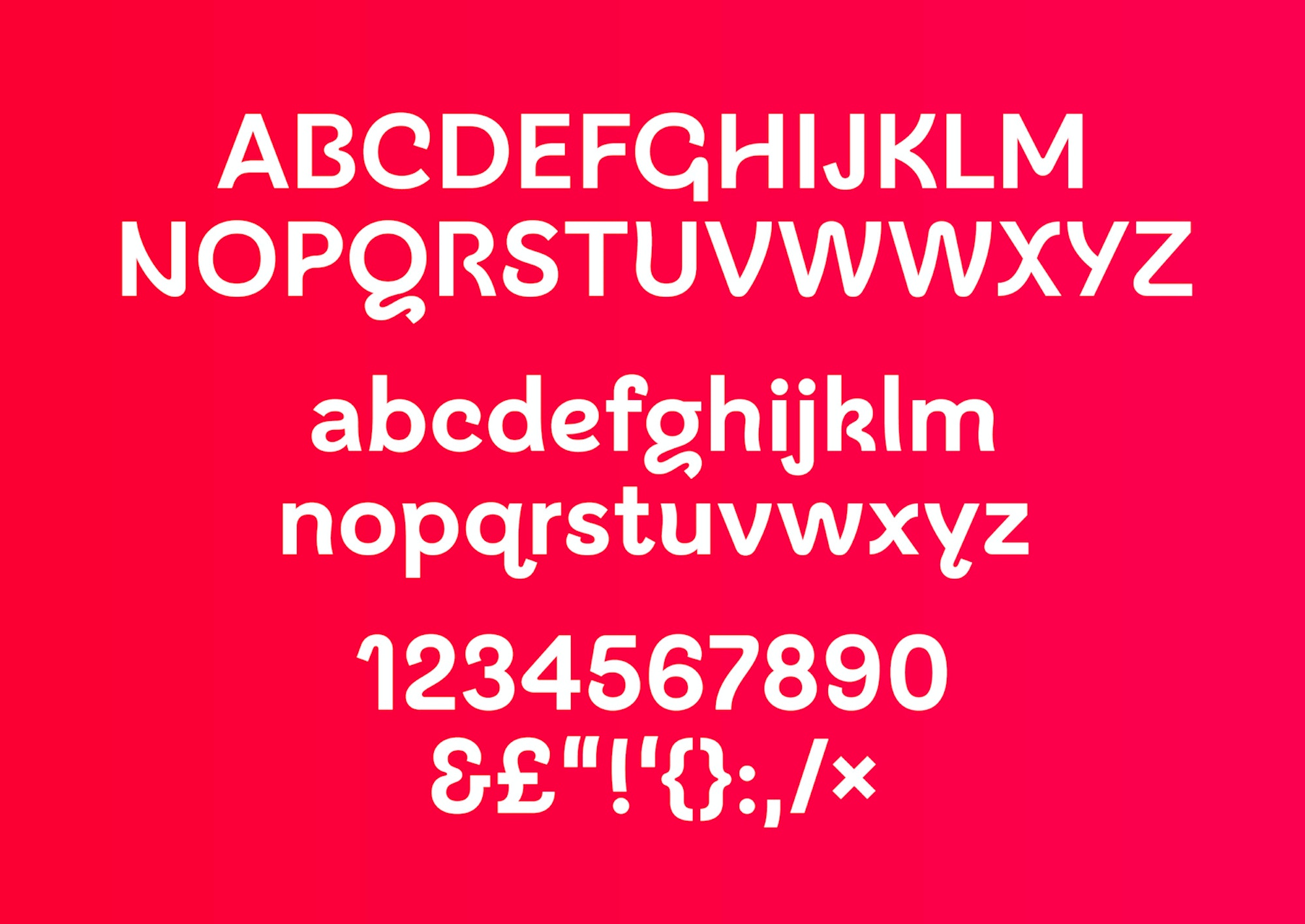 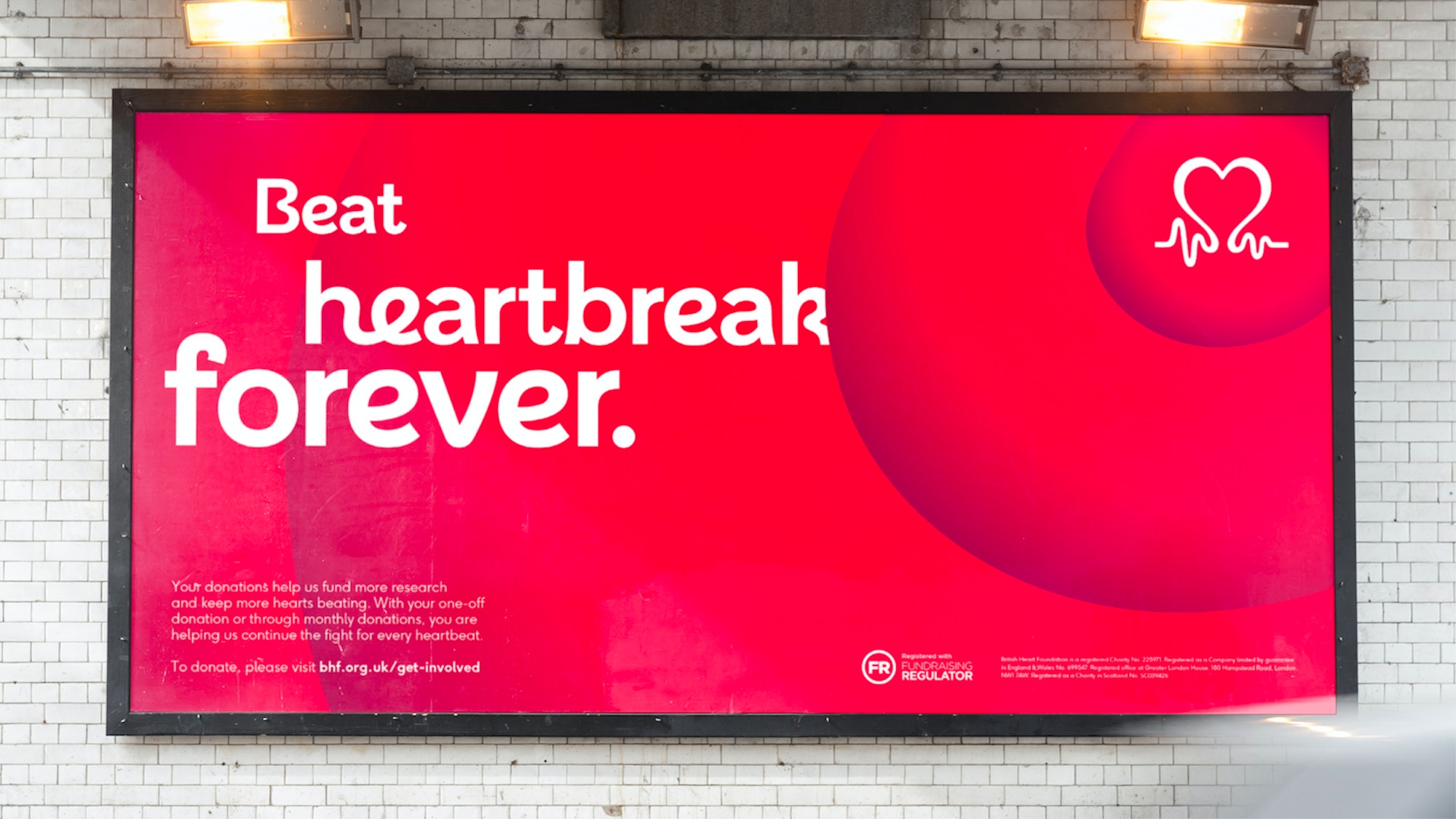 The new identity in situ

Be brave and trust yourself: Carin Goldberg on studying

How to deal with low self-esteem, anxiety and depression after graduation

Staff writer at It’s Nice That, Jyni Ong, on unexpectedly working with words