David Wilson has made the music video his own since graduating from the University of Brighton in 2007 culminating in a Best Director award at the UK Music Video Awards in 2015. Always as surprising as they are entertaining David has been commissioned to make videos for the likes of The Macabees, Artic Monkeys, Metronomy, David Guetta and Arcade Fire. Here, he talks us through his process and how the music video for Royal Blood and the track Out of the Black came to life… 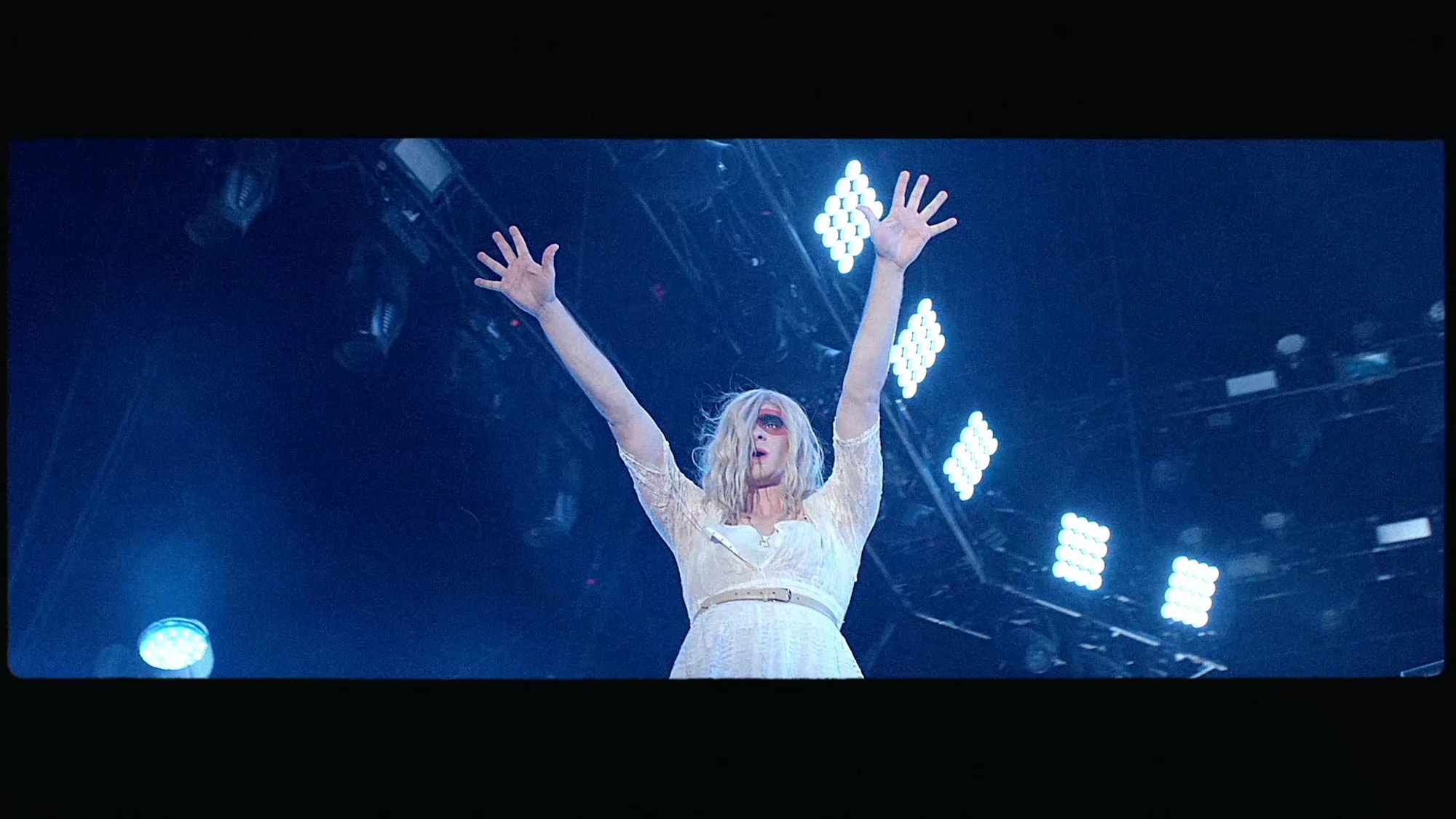 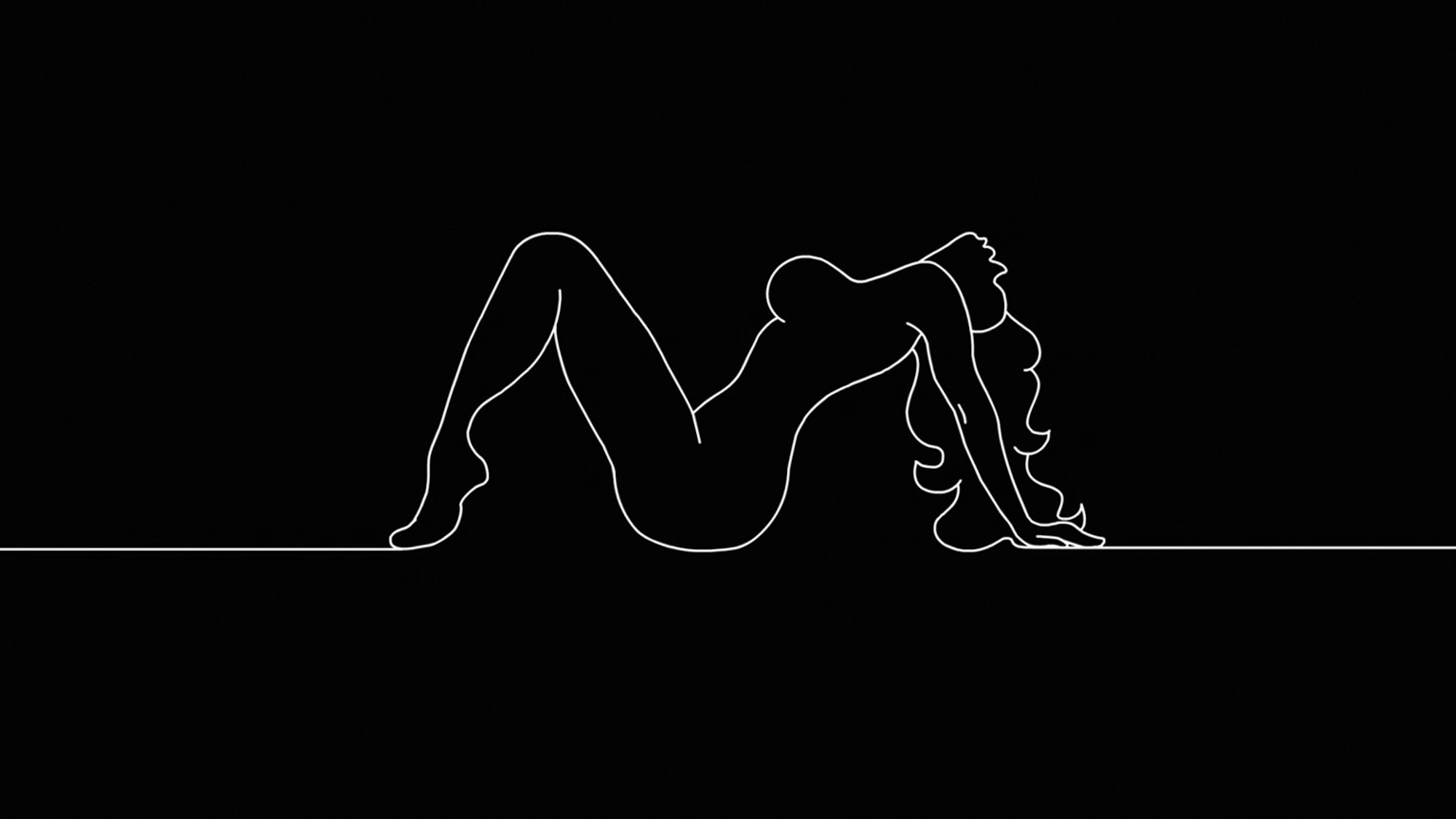 Artic Monkeys – Do I Wanna Know 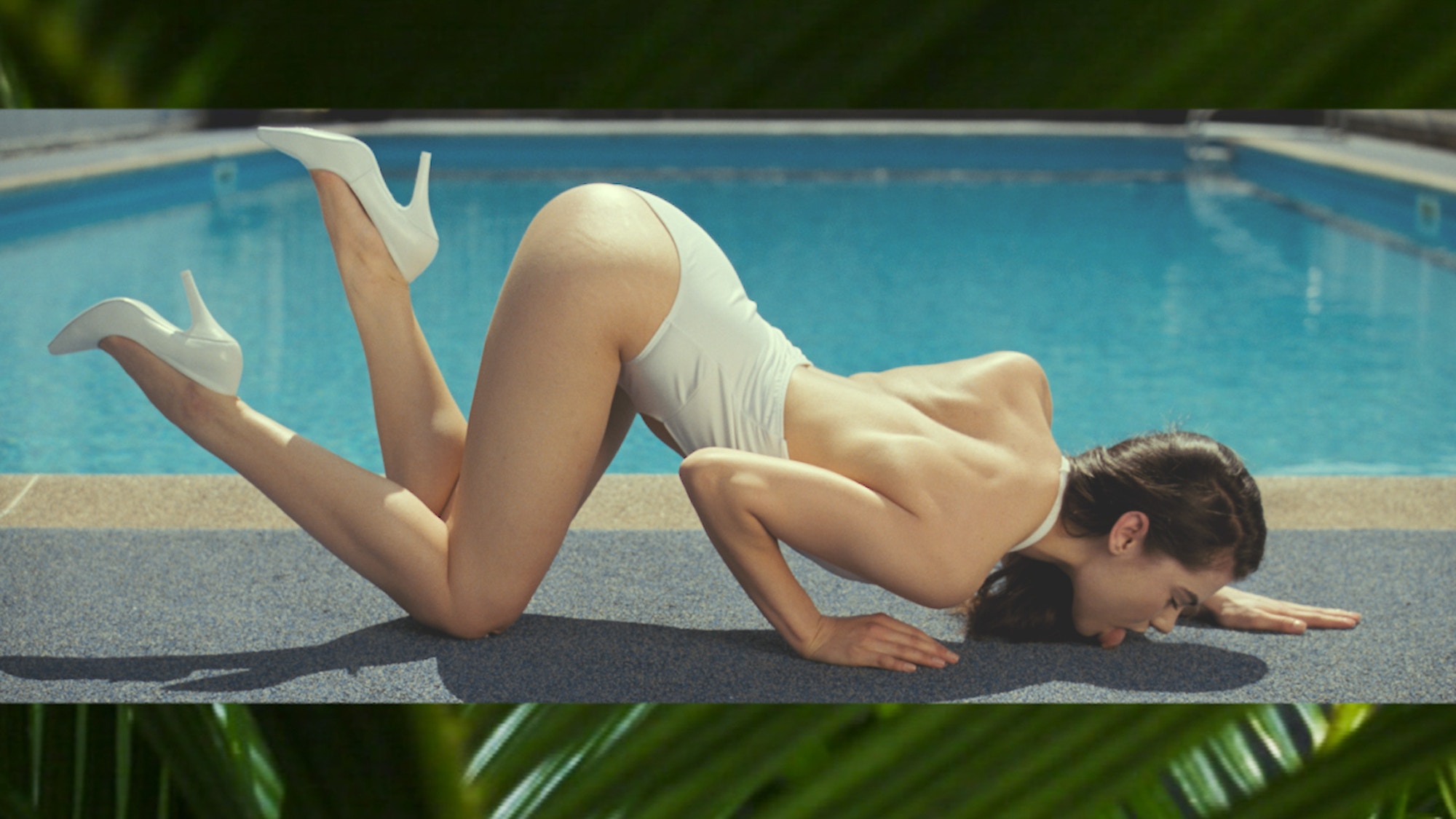 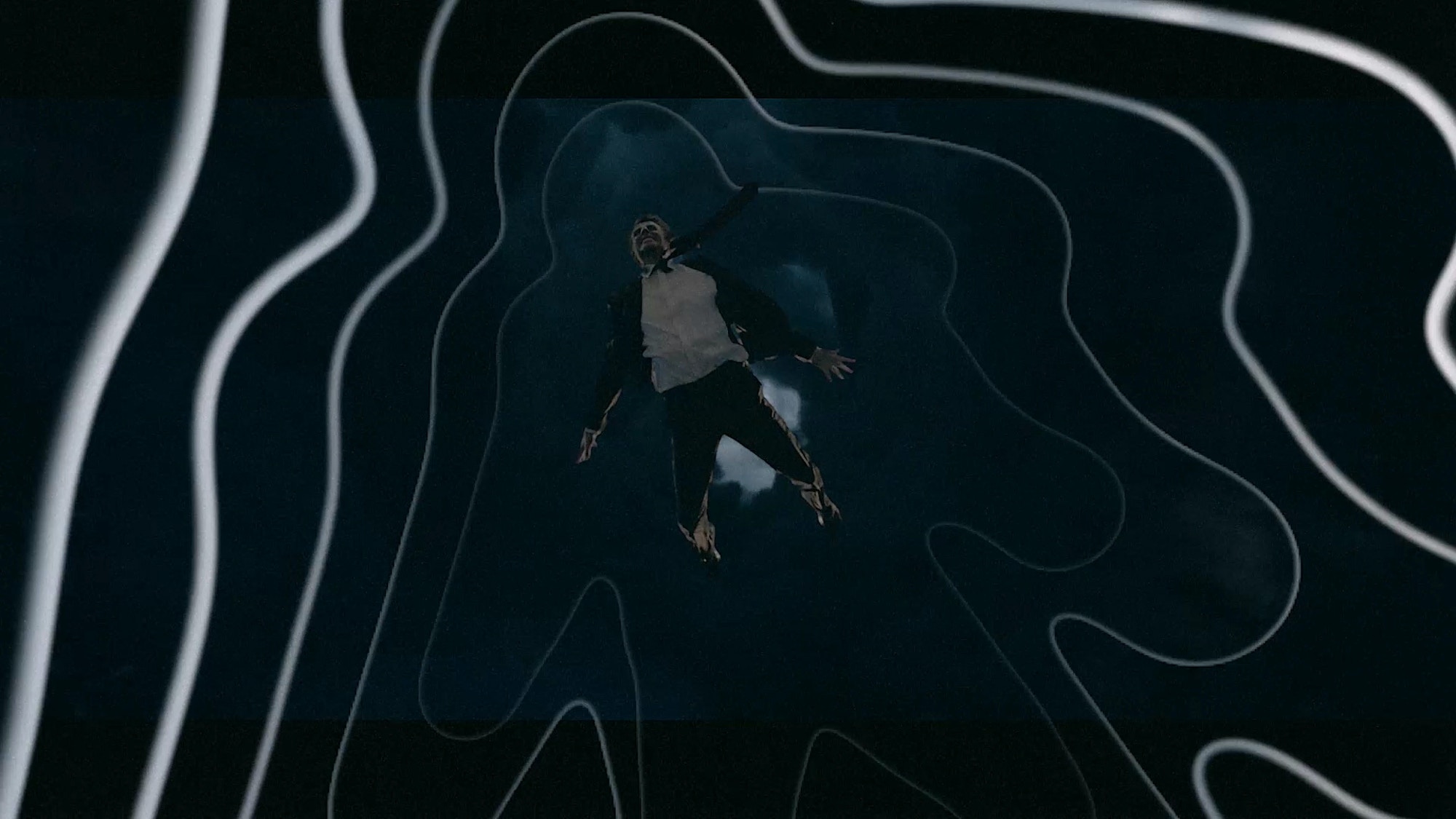 Tell us a little bit about where the project came from and the history with the client.
As with the majority of music videos, this project came in through my rep. This one came from the UK, and the company I’ve been with for over 8 years now: Colonel Blimp.

What was the brief and timings (was the project a pitch?)
From what I can recall, the brief was open in regards to concepts and the band wanted to feature in some way, but the video shouldn’t be treated as a performance video. Timing wise, this was the last single of the band’s campaign for their self-titled debut album, so I feel like we were given a bit more extra time than usual so we could make the animation as good as possible.

What role do your agents play in this?
This project was a bit more convoluted than usual as I was shooting in LA, and so we worked with The Directors Bureau (the company that reps me in the US) to line-produce the piece. Colonel Blimp were the direct line of communication for the client (Warner Music), and would keep them regularly informed of progress. They were also heavily involved in working with The Directors Bureau to manage costs, structure the timetable and bookings of crew members and keeping on top of post production. 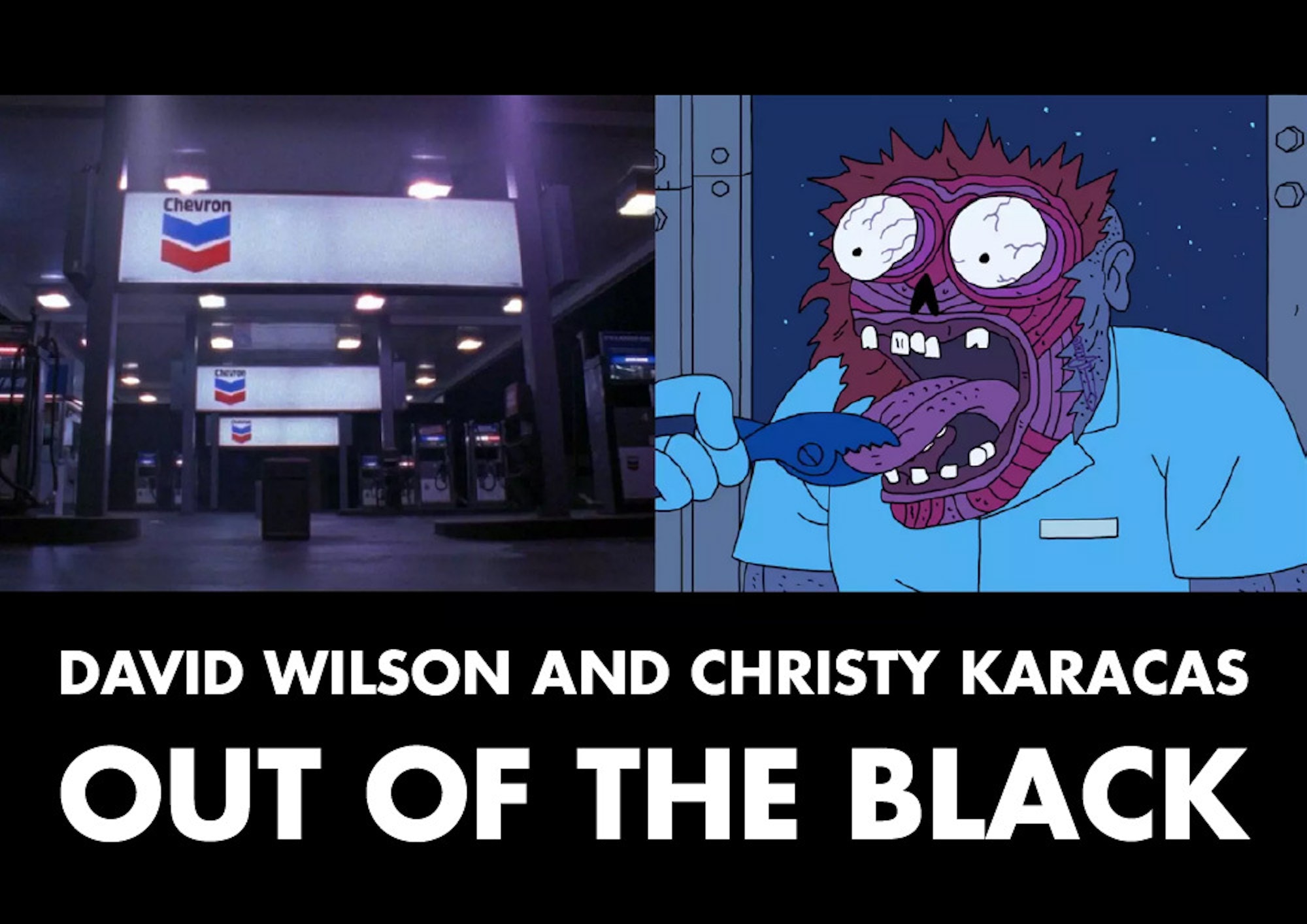 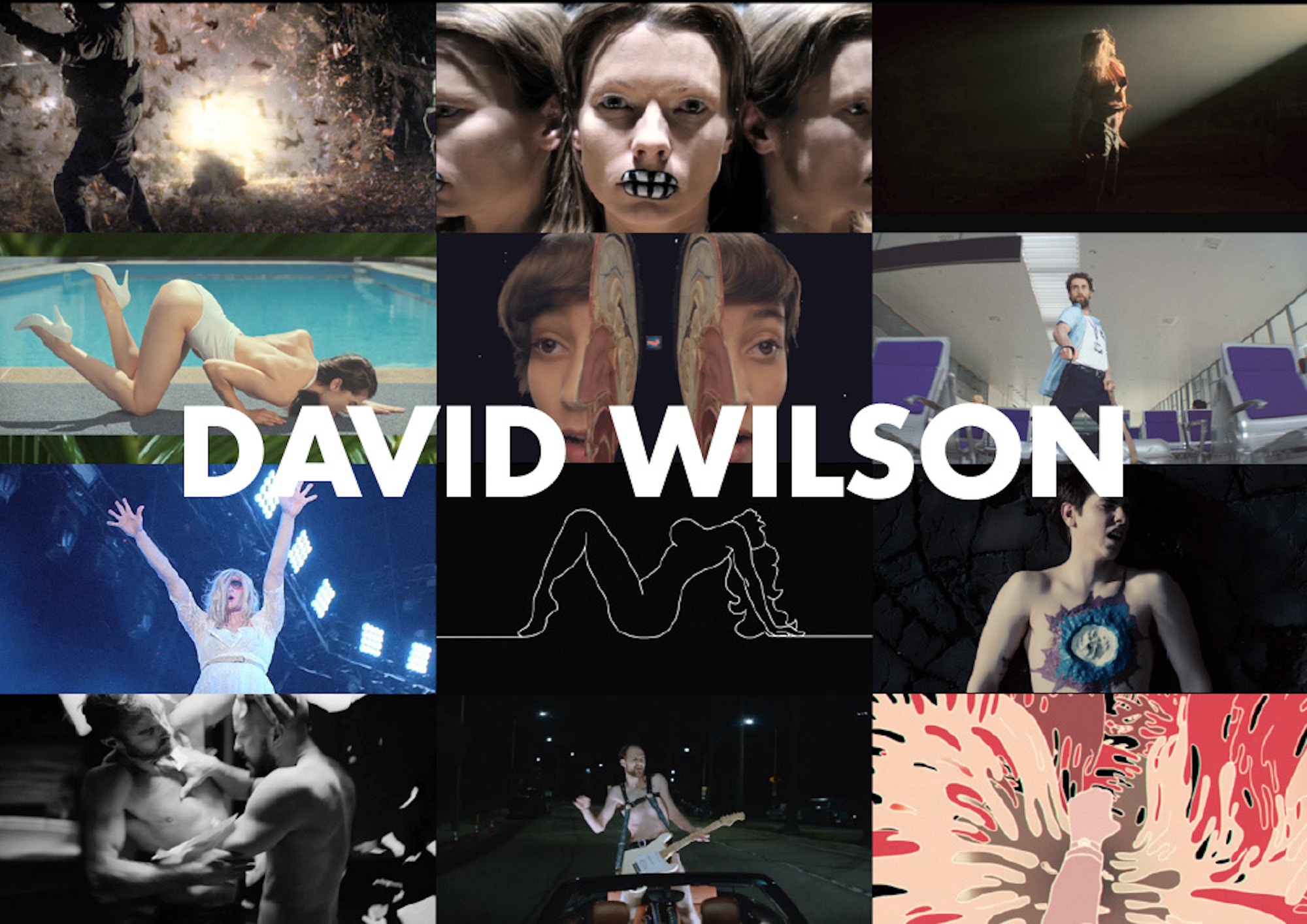 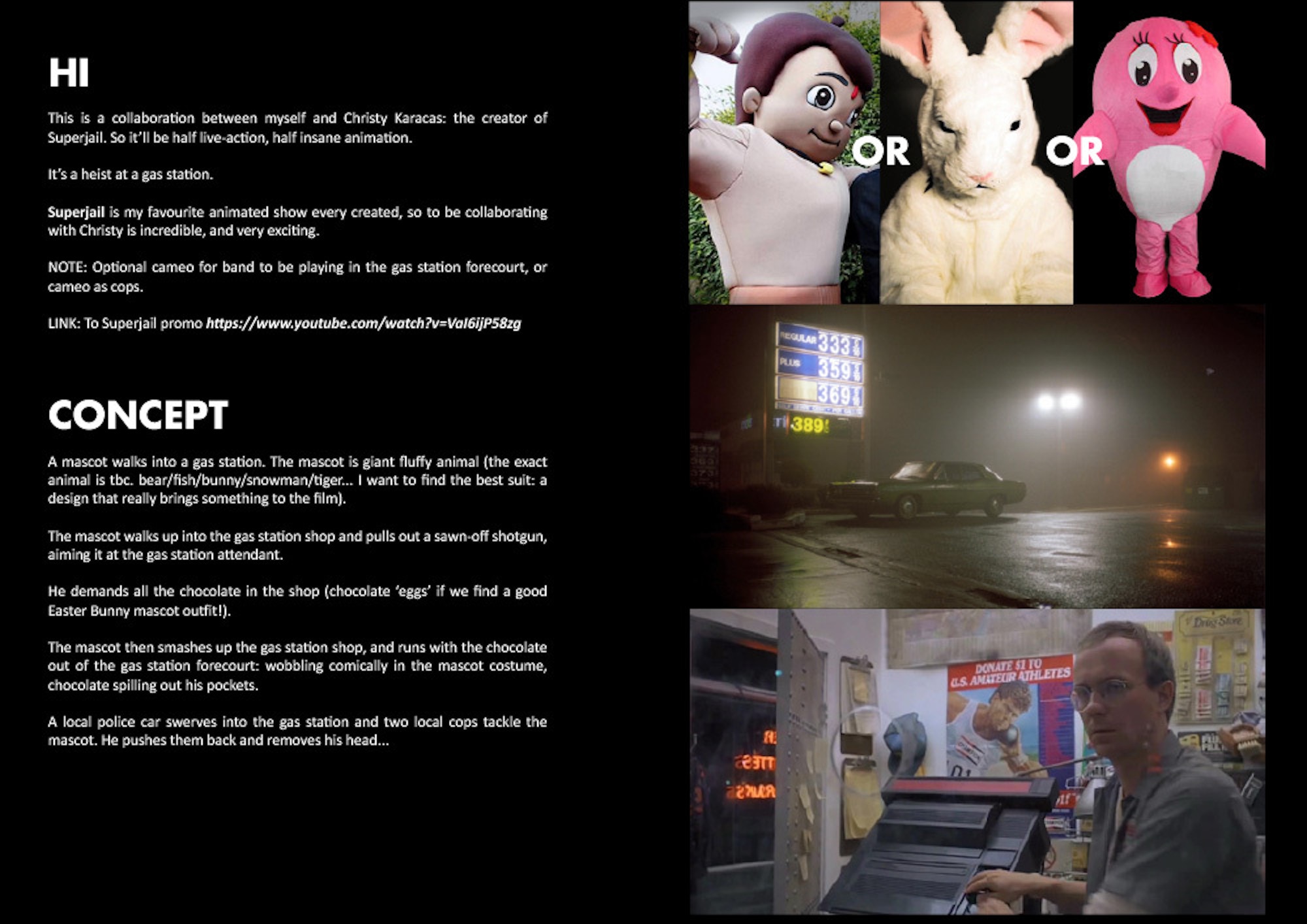 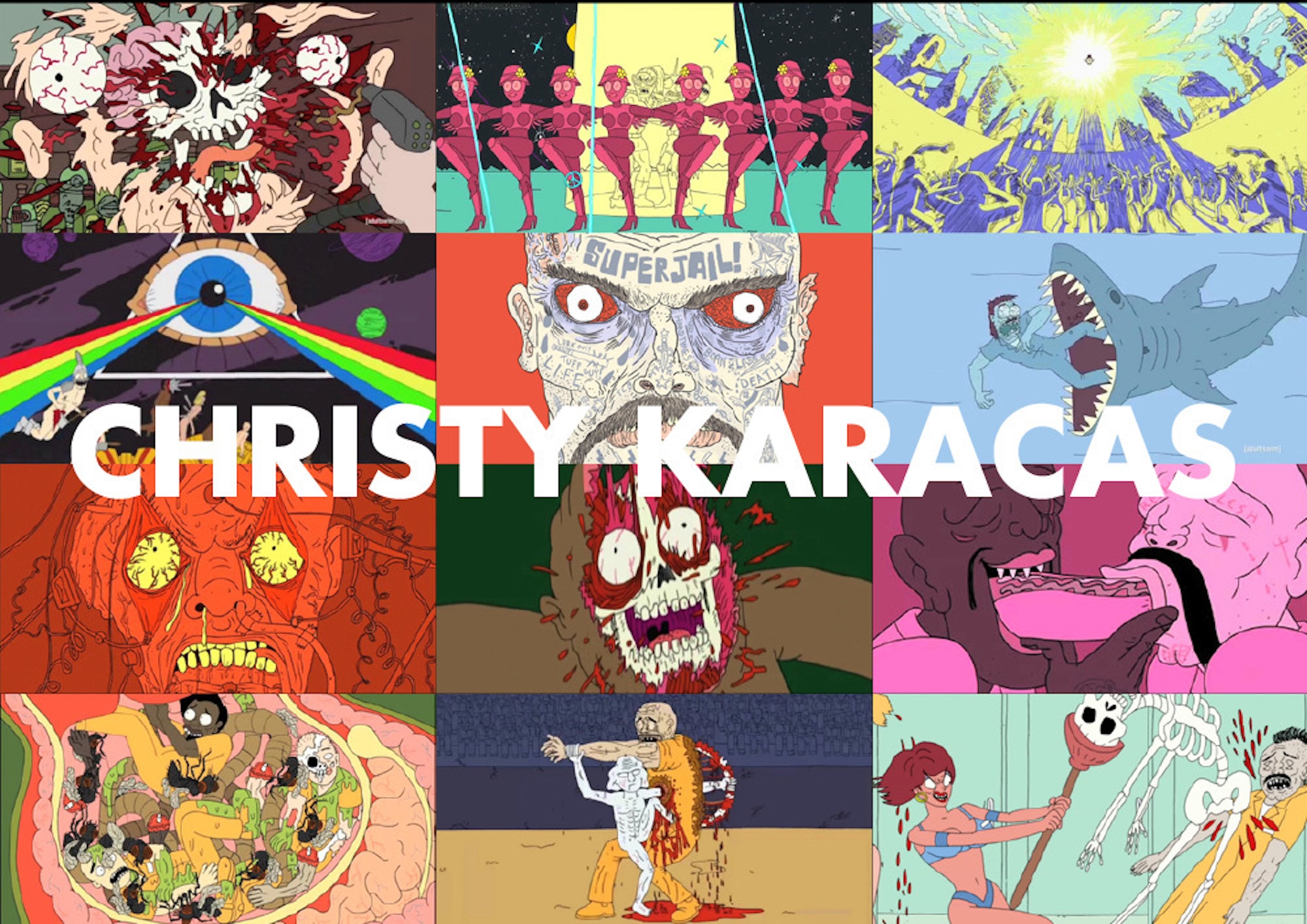 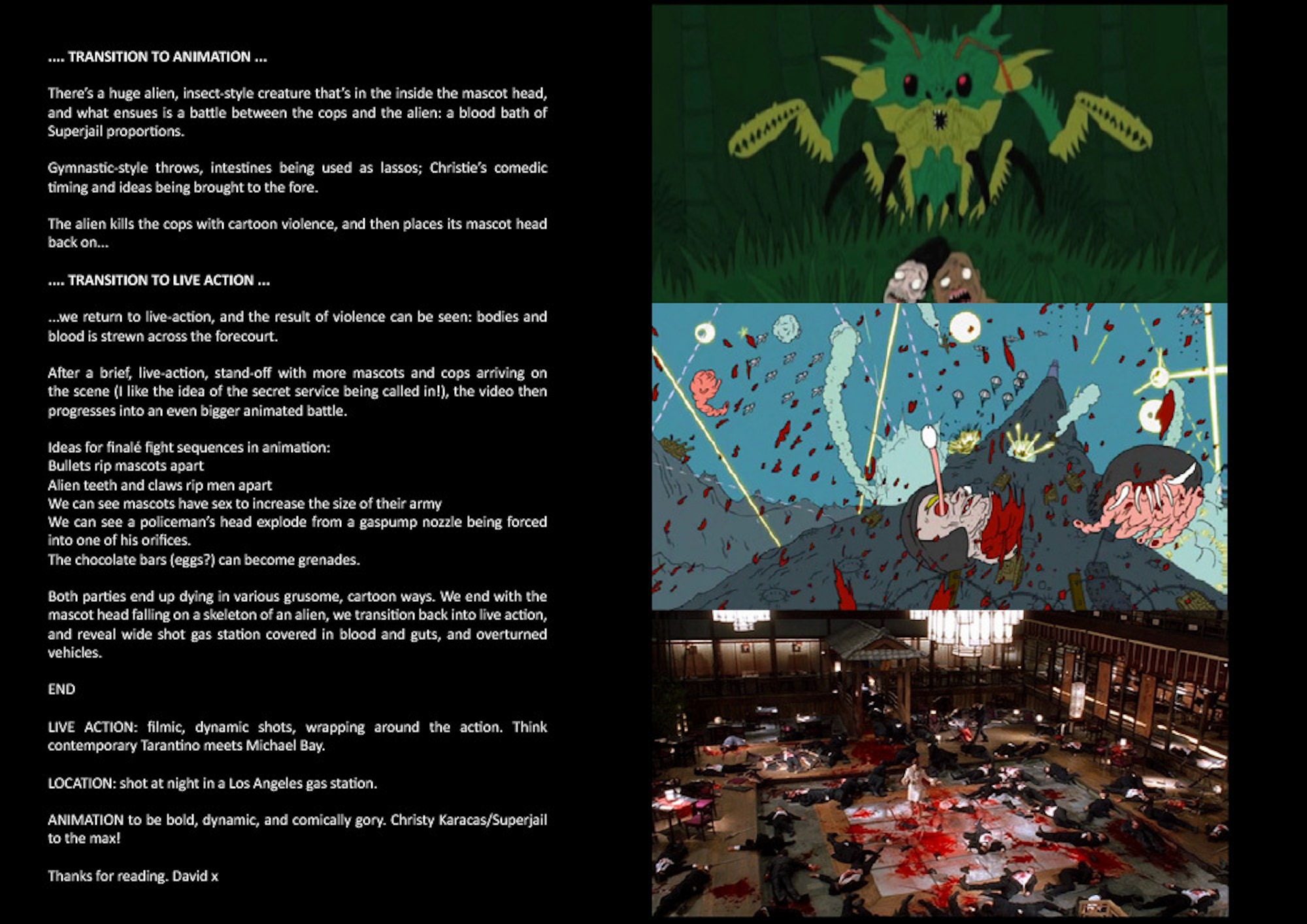 What is your process when it comes to pitching on a music video?
I will listen to the track a lot. As with the majority of writing there’s the excitement at the beginning, where images fly into your head. I work very hard at maintaining that feeling of excitement and not letting it turn into despair at any point. It can be very easy to feel unoriginal or be too hard on yourself. If there’s a sense of excitement I’ve learnt that it needs to be protected and nurtured, and over time it could blossom into a great idea. The full script of a music video script never just falls into your lap, but getting the bare bones down can take a day or two. Usually you have about 5 days to put a treatment together.

What were your references for the job?
The main influence for this piece came from my fandom of SUPERJAIL! and the work of Christy Karacas https://www.youtube.com/watch?v=VaI6ijP58zg . That show is one of my all time favourites. The animation and comic timing is incredible. The concept of the showdown at a gas station was partly inspired by living in Los Angeles. After living in London for 6 years I returned to driving… and gas stations! Going to gas stations in the middle of nowhere can be really creepy, even in California.

How is the idea pitched?
I put together a 4 page document (2 pages of writing). Considering how fast-paced and action-packed the video was, the treatment was very short. This helped this particular piece not feel overwhelming. I worked the hardest in trimming the fat from the script and telling the story in short, punchy sentences: like a film script. There is no set rule for treatments, but this punctual communication worked very well for this piece.

How does the idea develop when you’ve heard you’ve won the pitch?
Practical things affect idea development, such as how much prep time you’ve ended up getting, who out of your key crew is still available for the job, and also what elements have you had to cut from the script in order to get the project in on budget.

After that, it’s delving into all the nooks and crannies of every shot where the piece becomes richer and more developed. Location scouting, wardrobe briefs, art department, the price of stunts, casting… the creative development of a project is being affected on an hourly basis. It becomes a real skill to remain mindful of whether production developments are enhancing or damaging your piece, and management of that is the toughest part when you’re still developing the details of the script itself.

The storyboarding is something I obsess over. I’m a trained draftsman, so am able to draw fast, and this helps me plow through a shot list quickly. However, ever change in camera angle can sometimes make you question whether your kit list is correct, the amount of cast members, and whether you need more or less from your art department.

It’s an intricate web, and storyboarding really helps me process my decision making as well as allowing me to communicate my ideas in the clearest way.

What was the team that worked on the project?
There were a lot of new team members on this job. It was my first time working the cinematographer Michael Berlucchi, and production designer Greg Allen Lang. However, having Ben Gilovitz as my line producer was a true blessing. I had already put him through the ringer on my Metronomy ‘Boy Racer’ video, and he has firmly informed me how this Royal Blood video physically has turned his hair grey.

What was really beautiful was getting friends and heroes involved in this project. Having Christy Karacas create the animation was incredible. Having my mates come and act in the piece was SO fun. Everyone from my US music video EP and her dog, to my drinking buddies, to other music video directors, to an agency creative from a commercial I shot a few years back feature as extras in this film!

The casting of the gas station attendant was quite special. Due to the hurried pre-production schedule I wasn’t able to audition him in person (only via tapes). When he turned up to set he hadn’t seen the script at all! I made sure he was shown it whilst he was put through makeup. After he’d read it I asked if he liked it. His response was ‘Not really, but I’m here now!’. WOW!

What are the biggest challenges during the production?
In short: ambition vs finance. We shot all of the live action parts of Royal Blood in 10 hours. This was heavily influenced by the insane stories from the sets of my good friends DANIELS. I figured: if they can work that fast, so can I!

Doing a script that involves stunts such as car crashes, guns being fired, and multiple people in mascots costumes (who can’t see or hear anything) was a beyond stupid thing to even conceive of. Lord knows how we got through it. But we did!

What role do you play when it comes to editing?
Due my storyboards for this piece becoming highly detailed animatics by the time of the shoot, the edit often starts by arranging all the shots to the animatic, and then playing from there. I’m there throughout the whole process. Having the commissioner from Warner (Sam Seager) on set was incredibly useful. He was very forgiving in regards to what we had and hadn’t shot and knew we were reaching for the stars on this piece. The feedback from him was minimal, but the feedback from my EP at Colonel Blimp, Paul Weston, wasn’t. This was useful. Having someone that wasn’t on the set assess the footage and continue to push for it being tighter was incredibly important.

In regards to working with Christy, I became the client. Christy’s storyboards were next level… animated sketches that were created straight into Adobe Flash. It took him more weeks to create the ‘boards than it did for him to do the animation. That’s how detailed it got!

What do you actually deliver?
After all that work we deliver an uncompressed quicktime with a 10 seconds count down ‘clock’ containing the key information about the job on the front (client, band, ID number etc).

When was the first time you saw it?
Friday 30th January 2015. It was released 6th February 2015. That’s how quick it is from delivering to it going out.

What was the response and how do you judge the success of this work?
When friends would write to you saying how much they like a film I’ve created, it’s lovely. However, I feel I can only really judge the success of a piece of work months or years afterwards. It’s only been in the last 2 years that I’ve really appreciated how pivotal my video from Metronomy ‘The Bay’ was for me for example. The true success of a music video is whether it sticks in the brain, and so it’s only time that’s the purest judge of the strength of a piece of work.