Parts of the Process — Mondial Magazine Cover by Alex Hunting

Designer and art director Alex Hunting is establishing himself as one of the go-to names for magazine design. After graduating from the London College of Communication in 2010 Alex interned with Matt Willey at Studio 8 for three months, not a bad place to start as Matt is one of the biggest talents when it comes to designing magazines. Alex is currently Design Director of Avaunt Magazine as well as consultant Art Director of The International New York Times Opinion Pages and Saturday Review section alongside running his own studio. Here he talks us through how Rapha’s Mondial magazine cover came to be… 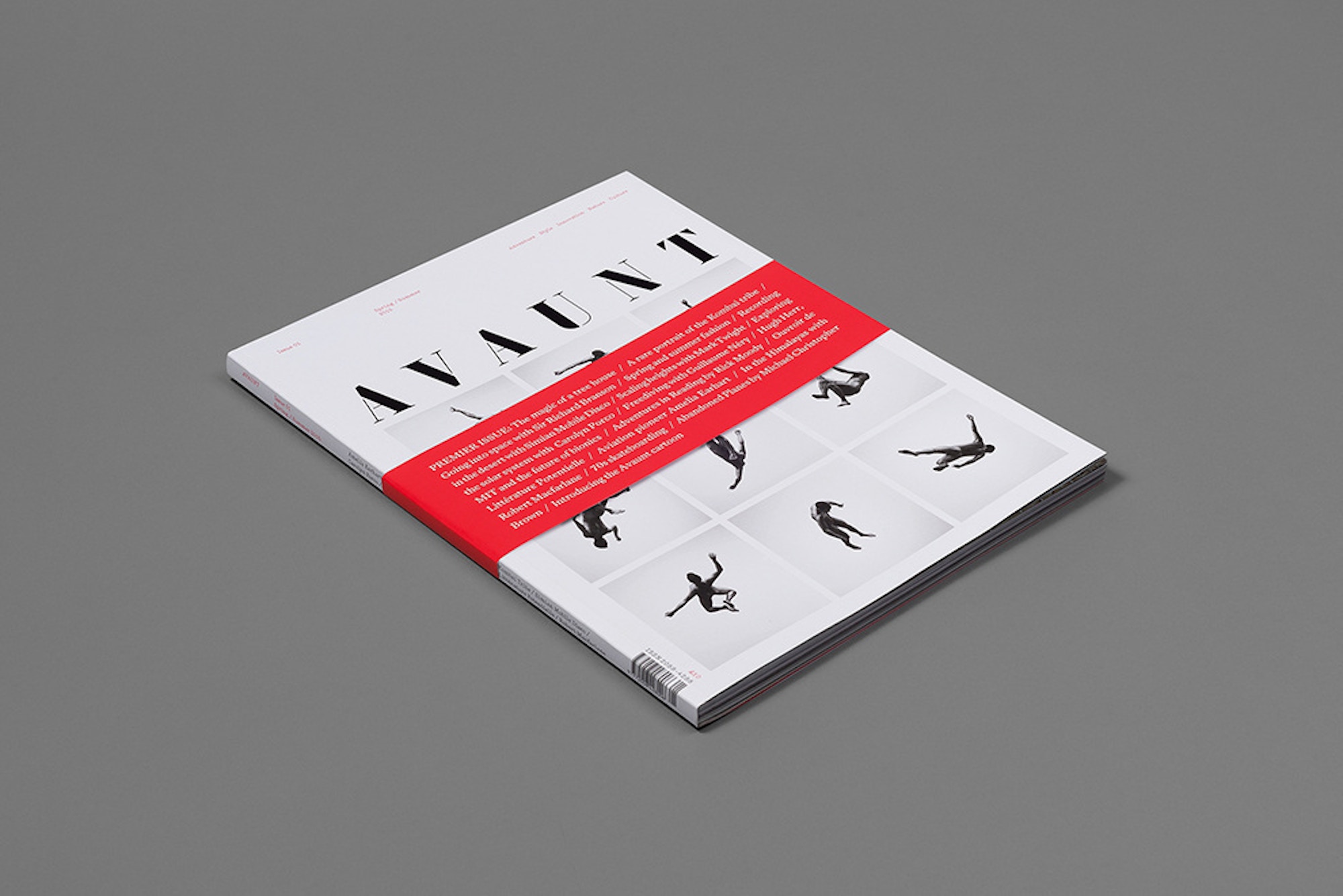 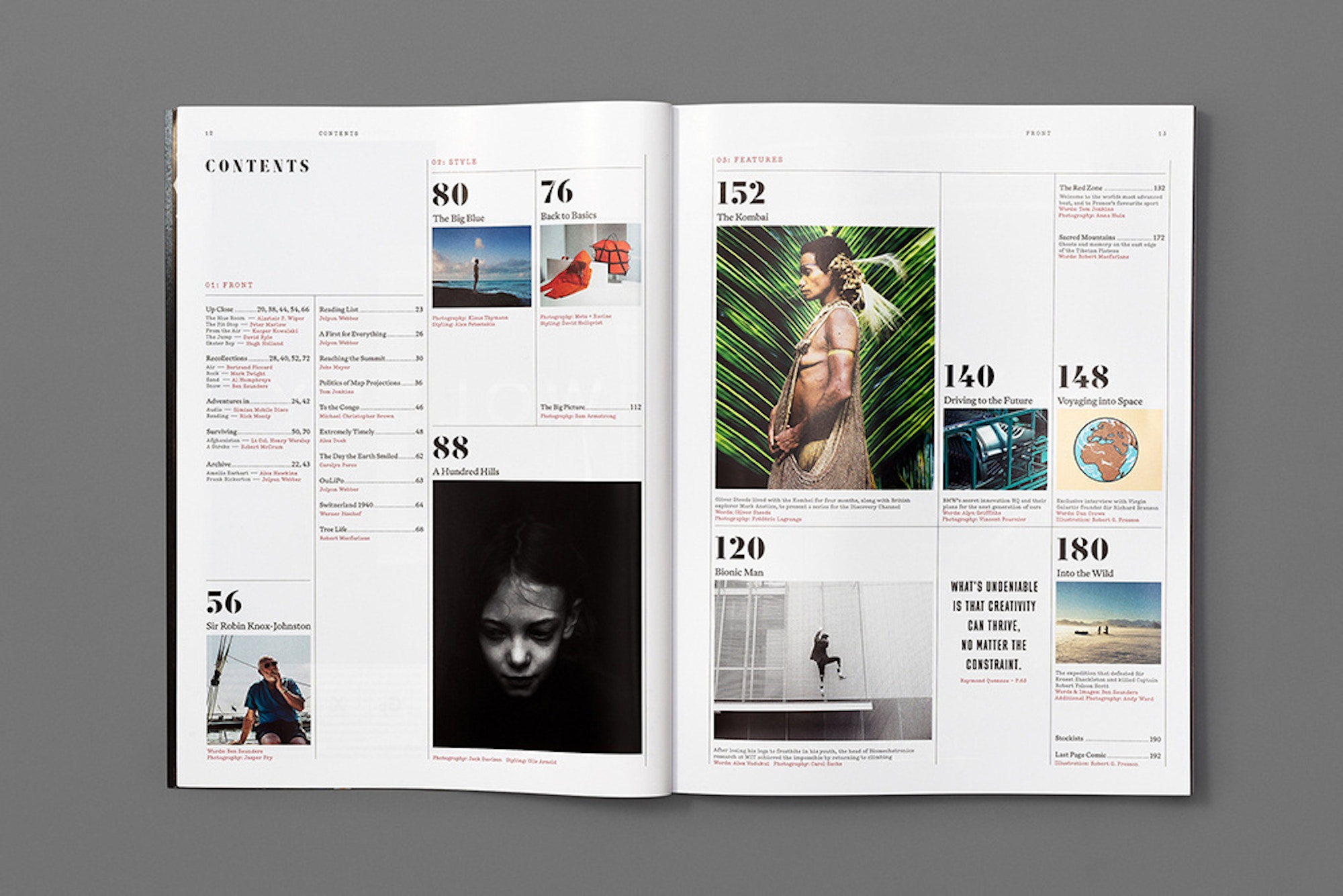 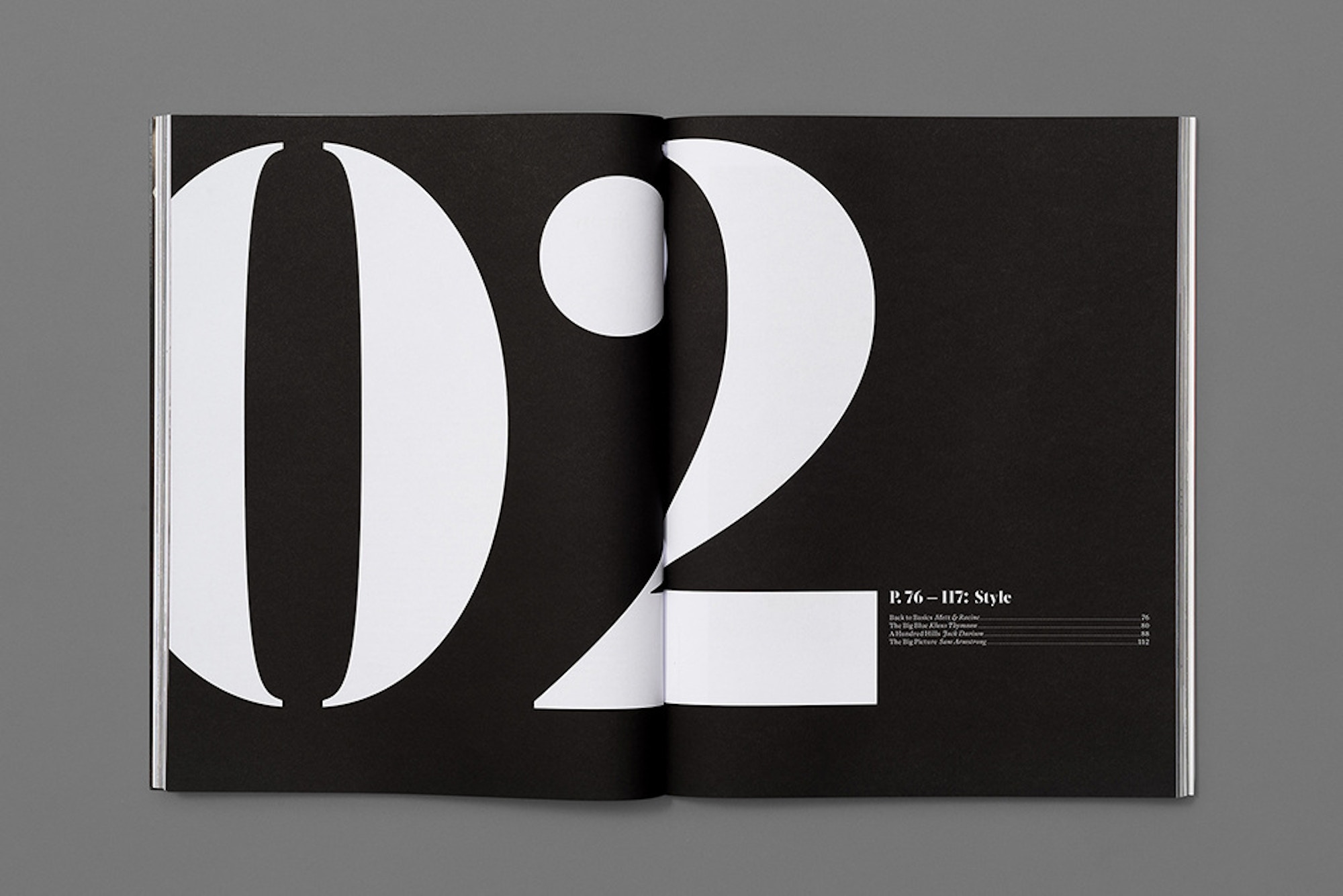 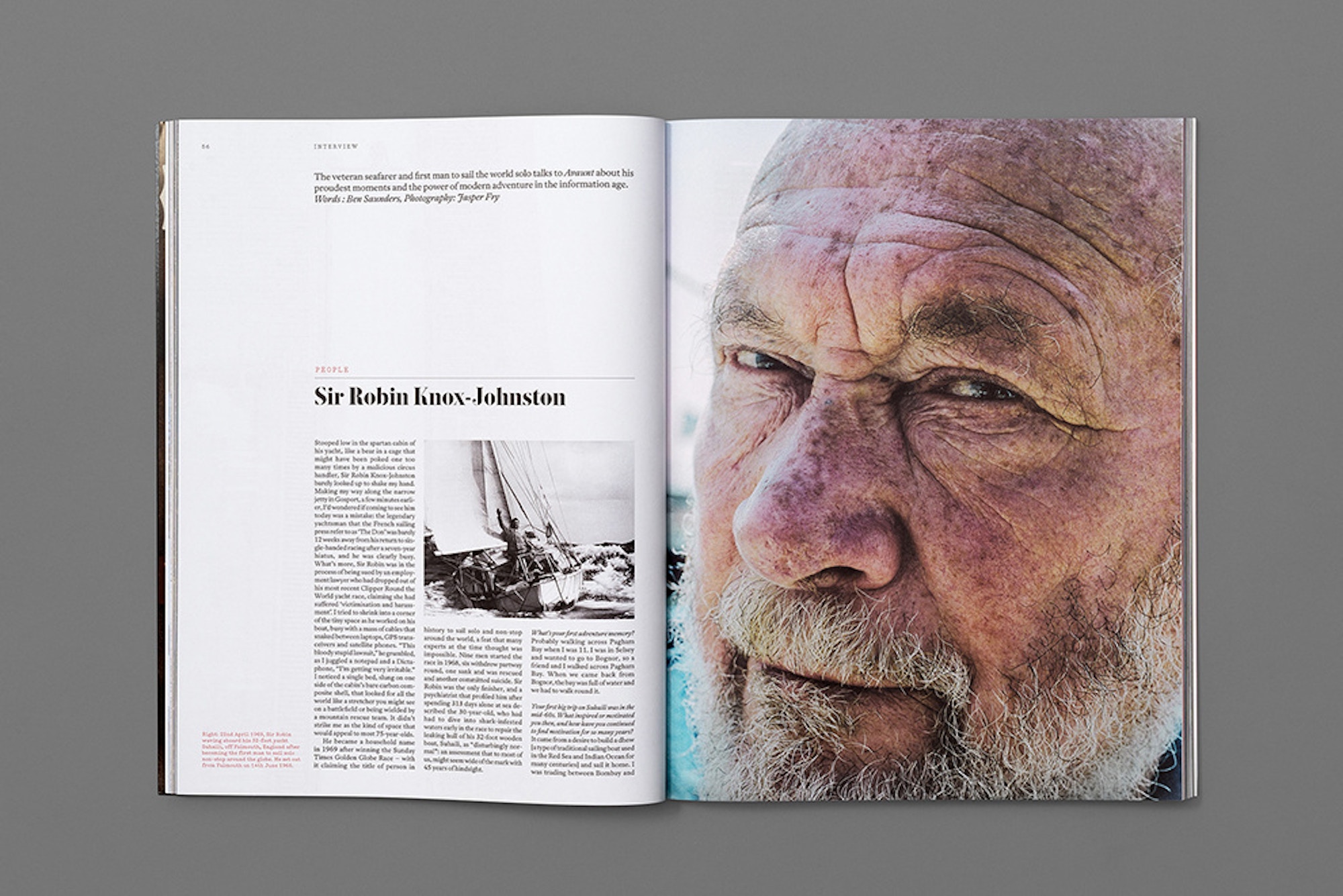 Where did the project come from?
I was asked by Jack Saunders the in-house Art Director at Rapha to come in for a meeting out of the blue. Jack identified a few of my past projects that he liked. He had also recently picked up a copy of Avaunt (A magazine I art direct with Matt Willey) and thought that the design sensibility was along the lines of what they were trying to achieve with Mondial.

What were the initial conversations with the client? What were they hoping to achieve with the magazine?
Rapha had been working on Mondial internally for quite a while and had already done some beautiful work before I arrived. Jack leads an exceptionally talented and busy internal design team. The standard of design is extremely high and has become the hallmark of Rapha over the years. The in-house studio create graphic design for every aspect of Rapha’s visual output, from in-store signage to jersey labels. As a result Jack wanted to bring in someone from outside to work exclusively on the magazine. Mondial is essentially the high point of Rapha’s editorial output. The past decade has seen an explosion in cycling media, both online and in print. Mondial expands the idea of what road cycling is and what the sport can be.

What were your initial thoughts on the project?
I thought it was an incredibly exciting project. As I’ve mentioned, Rapha has a reputation for exceptional graphic design and therefore I knew that they would be an excellent client in terms of communicating what they wanted. 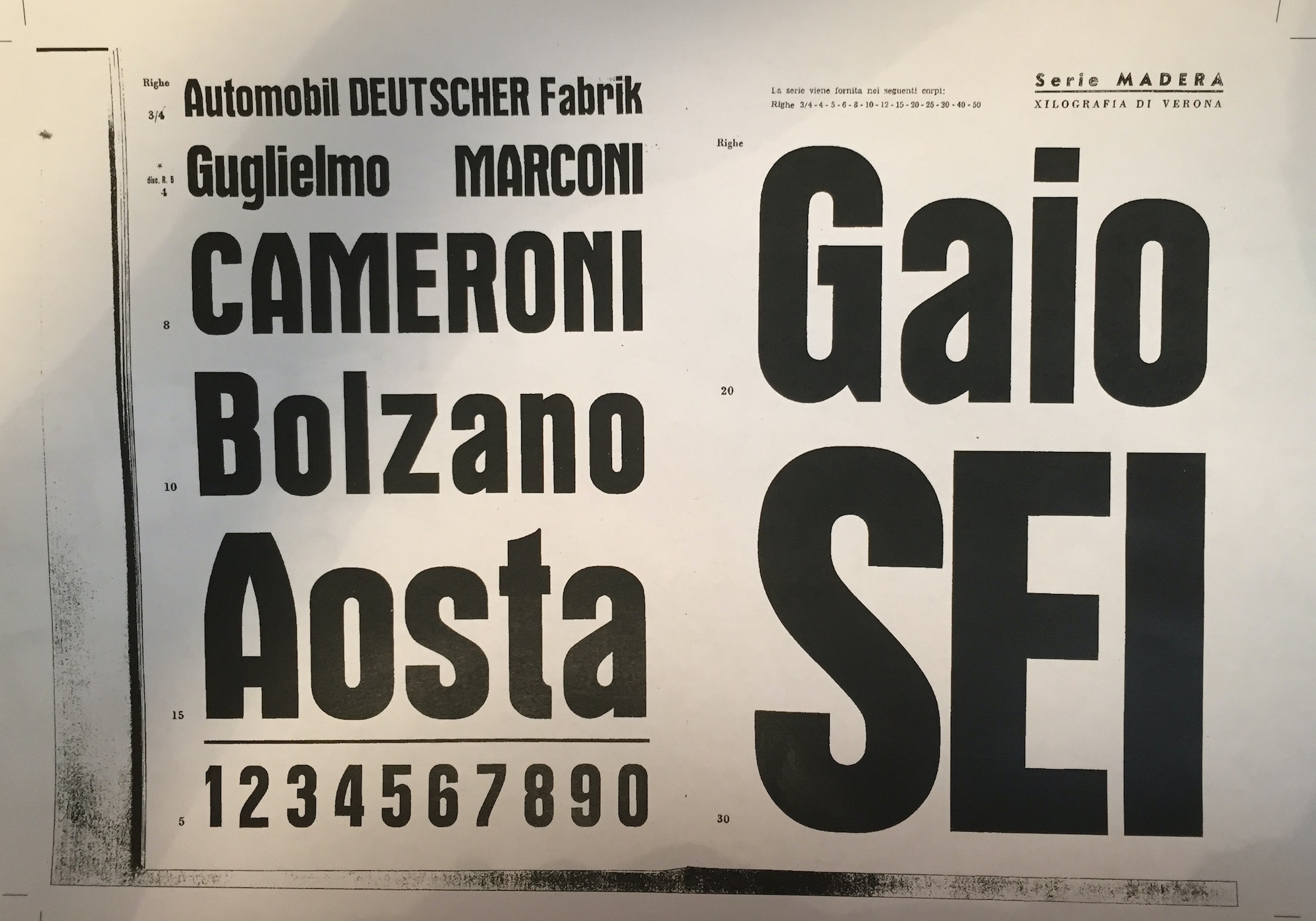 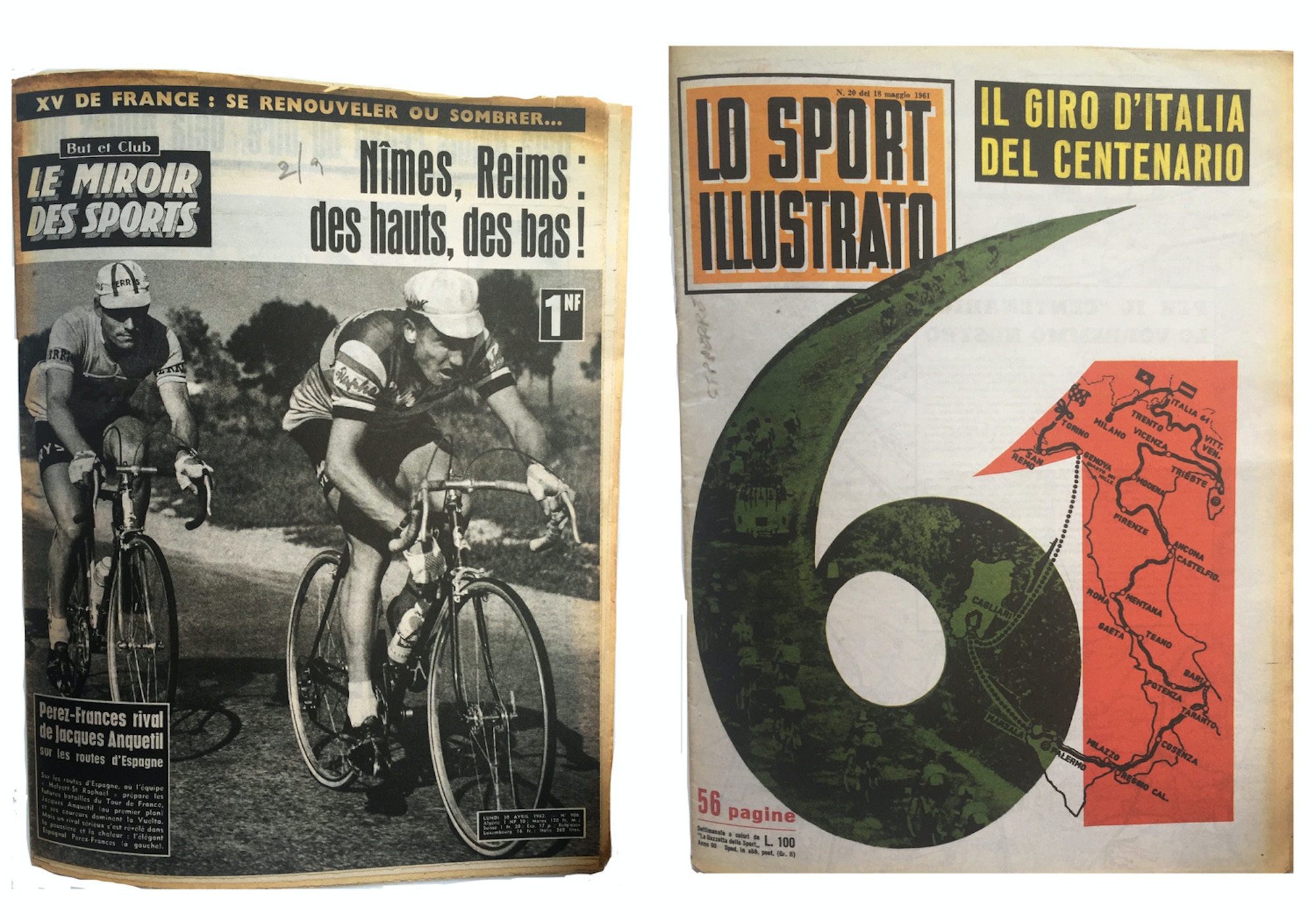 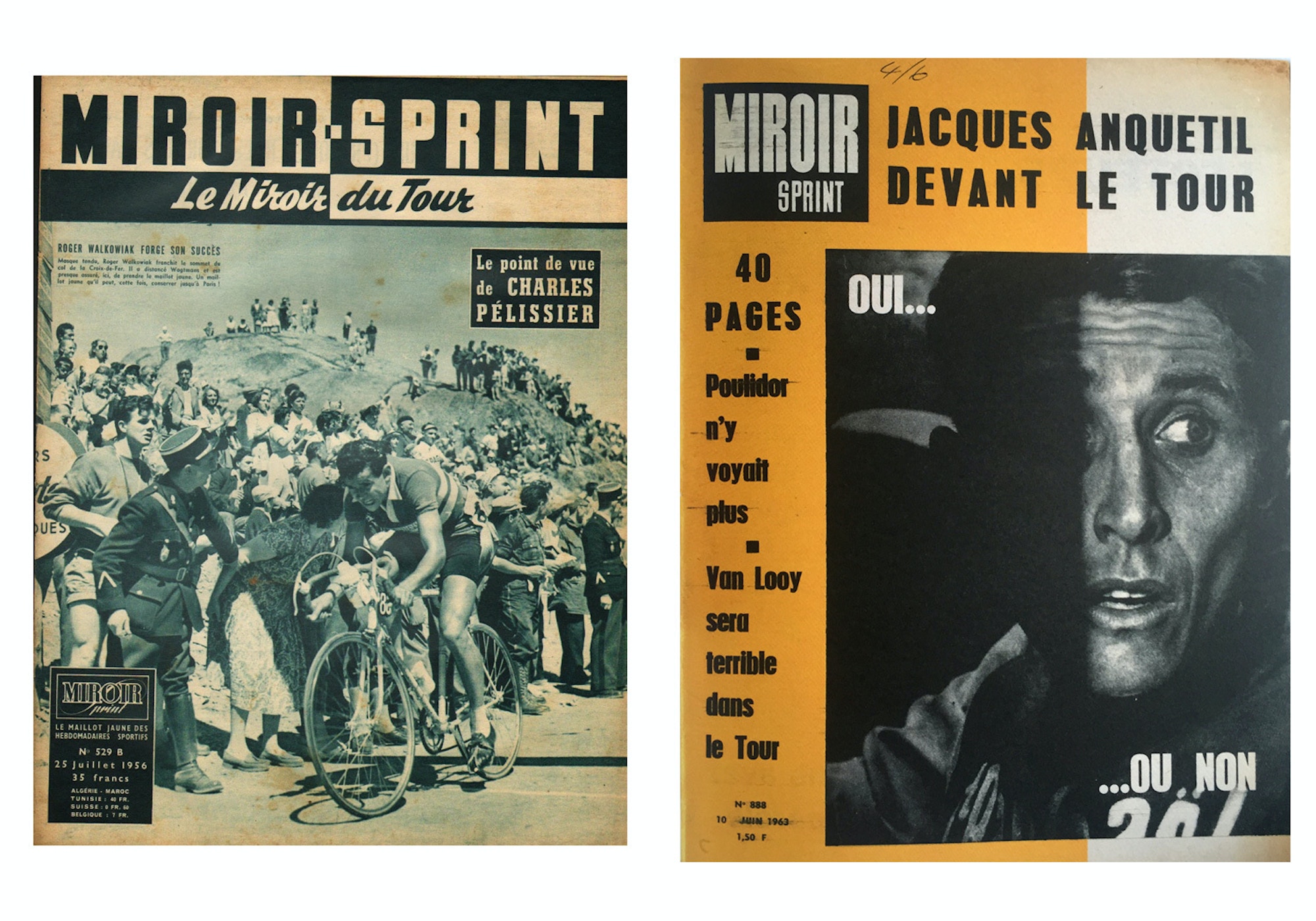 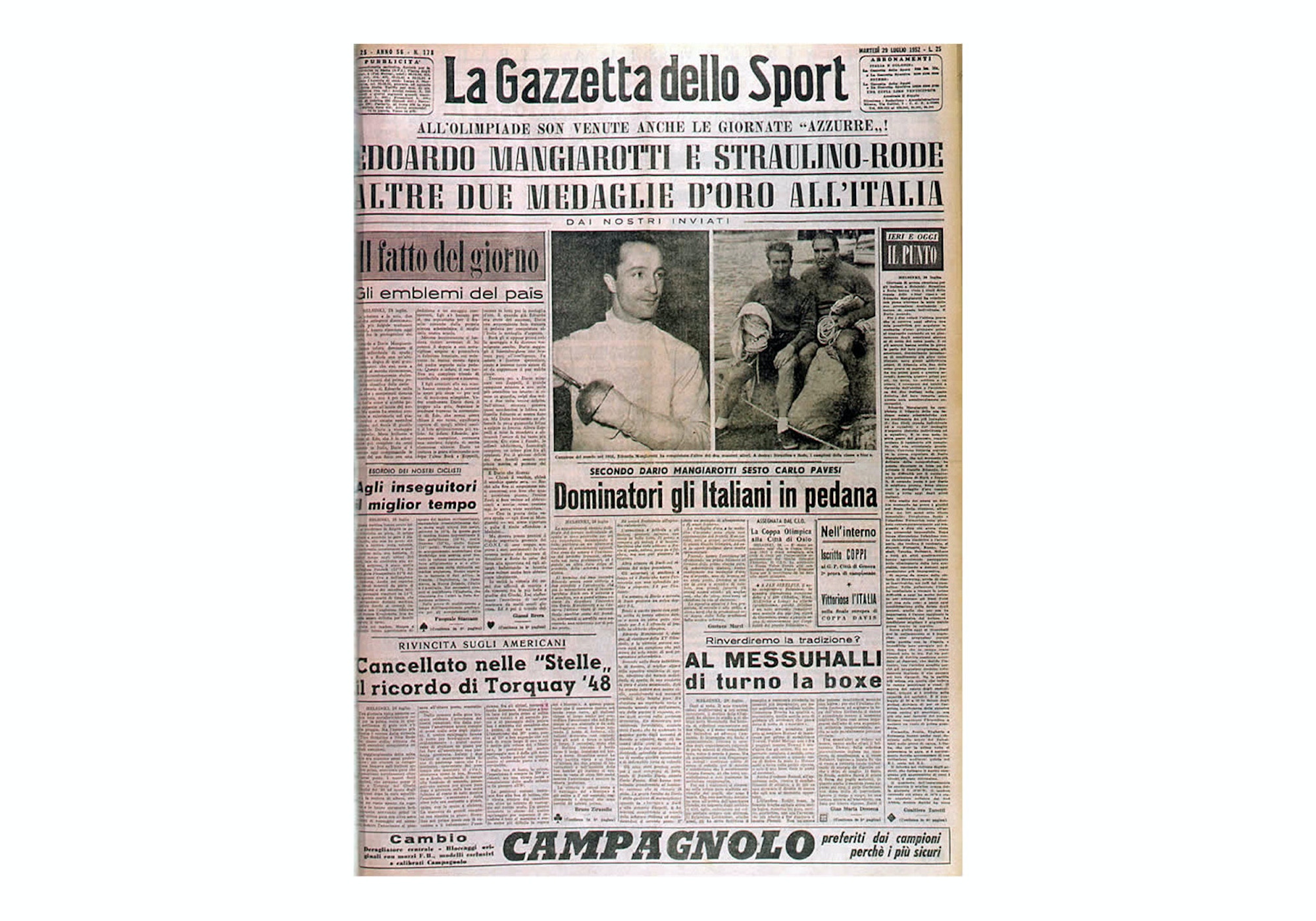 Were there any specific references you were looking at?
Yes there were. The beauty of researching for Mondial was that it gave us the chance to look back the incredibly diverse history of cycling visual culture. Two big inspirations were the Gazetta della sport, which is a daily italian sports newspaper dating back to 1896. It was the first real publication to cover cycling. Its printed on an iconic pink paper and its early issues were almost always entirely black and white dense typography on pink paper. The Gazetta has been a rich source of inspiration to the Rapha brand since the beginning and we knew that this would be a really interesting and different approach that would stand out amongst the crowd. Another inspiration was the Mirroir Sprint which was a french weekly sports magazine that was published from 1946-1971. It had fantastic bold condensed sans serif typography and was a major inspiration behind the masthead (and later custom typeface). We also looked more generally at post- war european modernism.

How did the magazine have to fit into the wider brand look and feel?
Initially Rapha had looked to use their brand typefaces for the magazine and when I arrived I looked at that as an option. However it quickly became apparent that something was missing from an editorial design perspective. The brand typefaces (Trade Gothic, Adobe Caslon) serve the brand incredibly well and have helped Rapha to establish a real recognisable aesthetic across all their collateral. Unfortunately we wanted the pages to have more flair and be able to use typography quite dynamically.

It was clear that we needed something more distinctive to define the Mondial identity and to allow it to exist on its own as well as as an extension of the Rapha brand. Luckily Rapha have a fantastic archive of type references and specimens in their studio. Jack had identified one family from the archive, an old incomplete condensed sans serif which had the exact feel we were going for. We then worked with Colophon Type Foundry to digitise the font and complete the character and glyph set. The typeface has become the foundation of the magazine’s identity, and we have since expanded the family to include an extra condensed version of the typeface to give us more flexibility and more dynamic layouts.

What were the starting points for the cover?
Jack and the team had looked at quite a few options before I became involved. As I mentioned before the type only references (Gazzetta / Mirroir sprint etc) were important but we also obviously looked at photographic covers. One of the important points about the cover is that it needed to communicate that it wasn’t just a magazine about cycling. Mondial is supposed to expand the idea of what road cycling is, it covers subjects including Architecture, Design and Philosophy. It was clear to us that putting a photographic image on the cycling related image on the cover wouldn’t convey the diverse content inside.

We ended up exploring a vast number of type only options, from simply contents page covers, to covers with a series of quotes on them. We landed on a system where you have a series of subheadings that highlight themes in the issue with a stand firsts underneath. We hope this gives a quick snapshot of what you can find in the issue and hopefully this draws the reader in. We created a flexible grid that changes subtly each issue, with the cover stock changing colour and the column combinations shifting slightly.

There were other more practical considerations too. Mondial is a members magazine so it is distributed directly to RCC members internationally. It is not available on the news-stand. As a result of this we had more flexibility with the masthead and chose to do something more unique and position it in the middle of the cover.

What is your process when it comes to starting to design covers?
Some very initial pencil sketches and then once it was clear that it would be typographic it was a case of hundreds of subtle variations of grid, type treatments and colours. Lots of Indesign pages.

At what stage did you present to the client and what was their feedback?
Jack and I would present to Mark and Simon several times throughout the process. They were brilliant and onboard with a type only cover early on but also gave very constructive feedback. There were also brand considerations like making sure the Rapha logo was clearly a part of the logotype lock up. 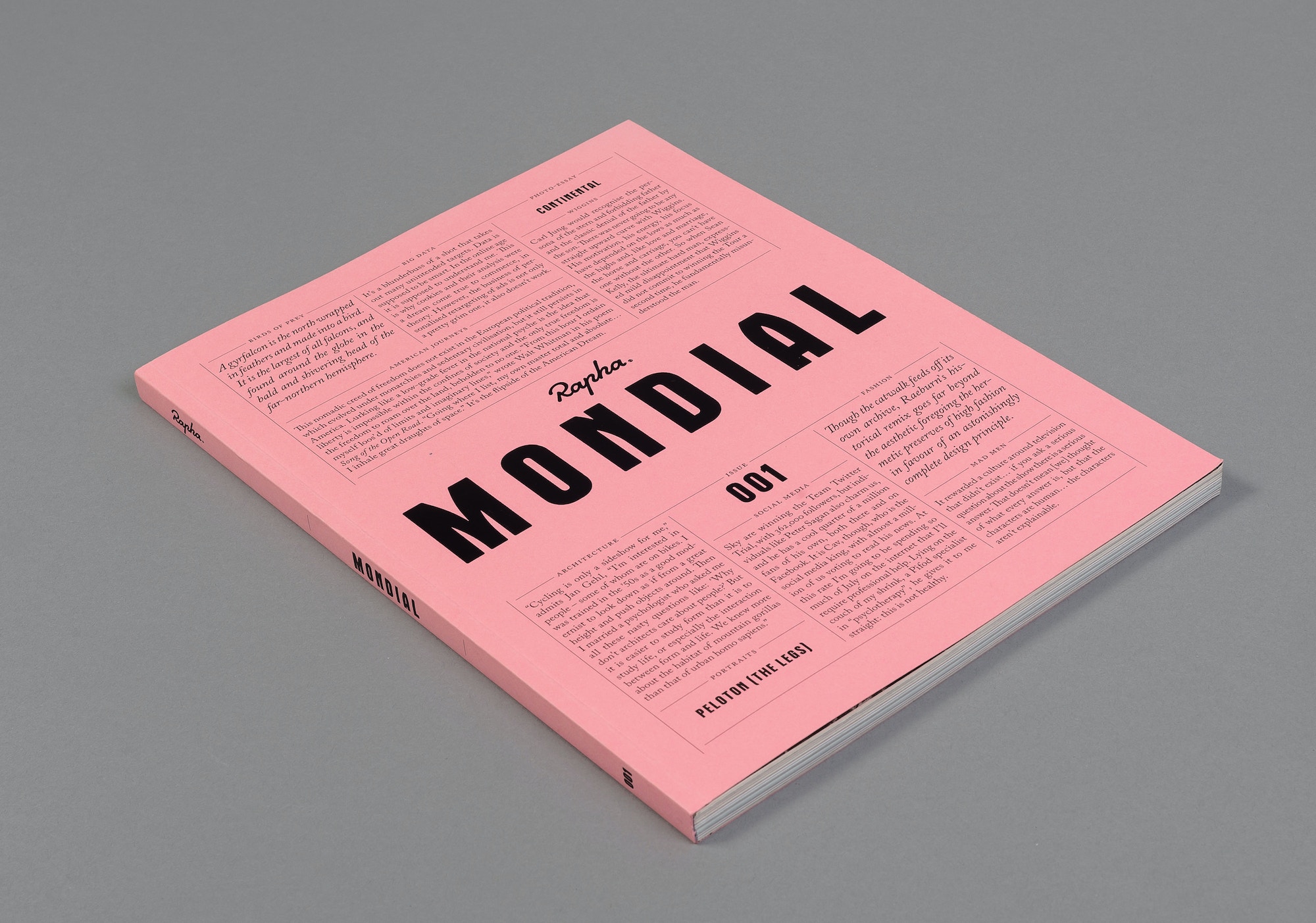 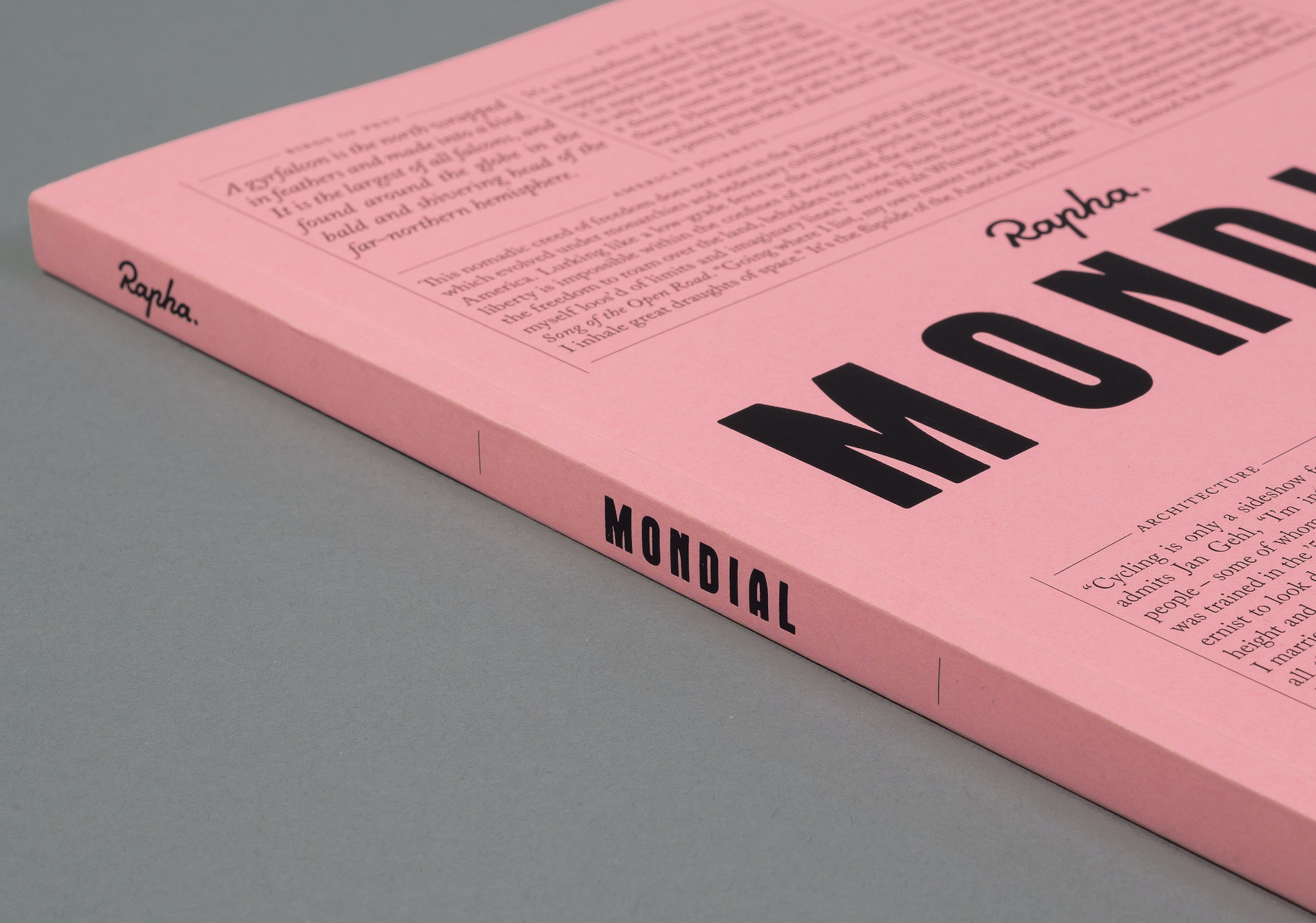 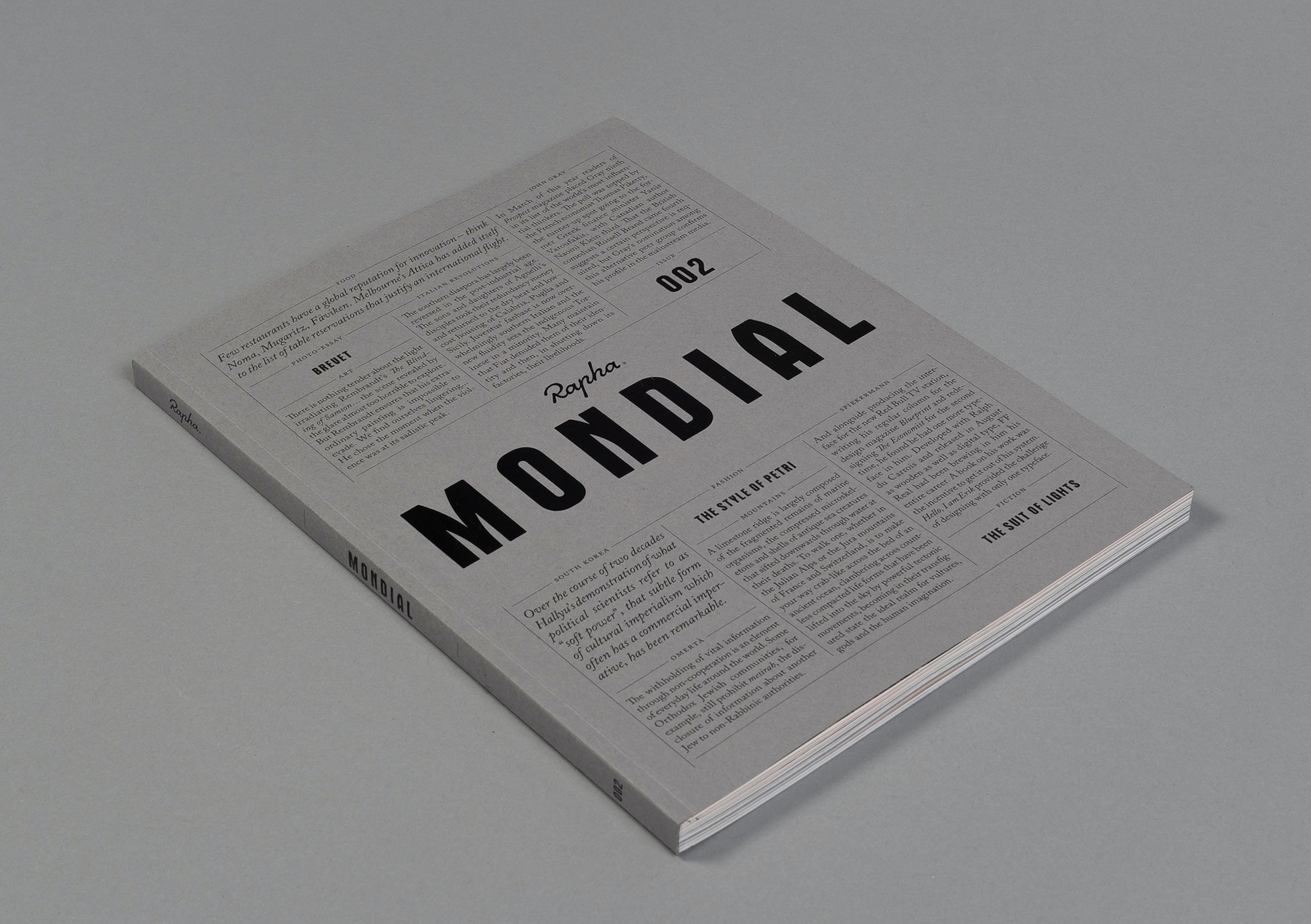 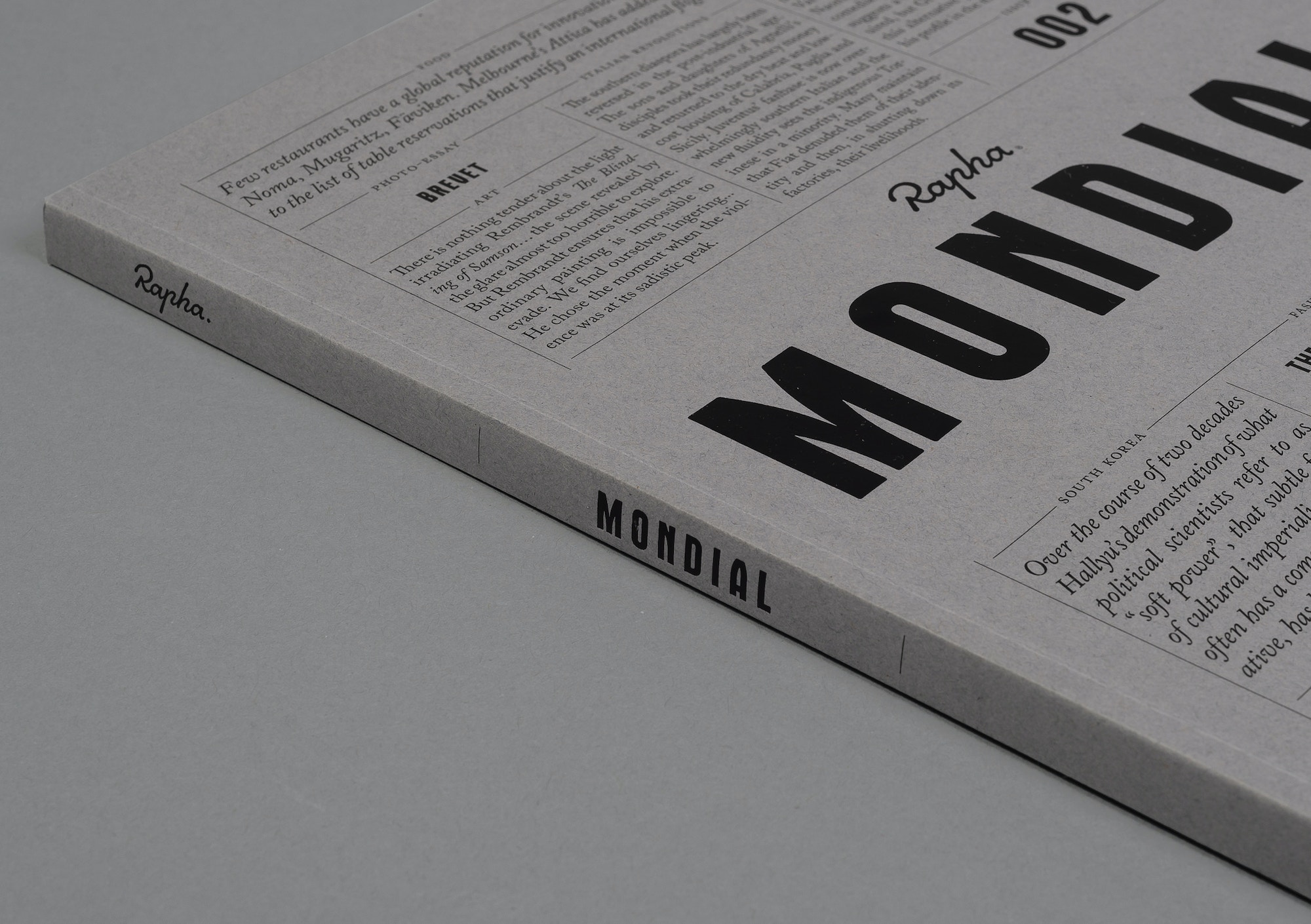 How was the final thing delivered to the printers?
We handled the print production. We had foil tests done prior to the actual print to make sure it would be executed crisply enough. As it was not an image lead cover the most important print production elements were making sure the foil was perfect.

How was the magazine received? What was the reaction from both client and target audience as well as the design community?
I think it has been received well. Rapha were very happy with it but quite rightly the team involved in the magazine were immediately looking to improve aspects for the next issue. I hope that the subsequent two issues have been better than the first and will continue to improve. We have won a graphite D&AD pencil for issue 2 and have been awarded in CR Annual and a merit from ADC.

How do you judge the success of the cover?
I think its been pretty successful. The Rapha audience are a very discerning crowd who have come to expect a high level of graphic design from the brand. I think we’ve managed to achieve a unique cover concept that sets it apart from many of the other titles on newsstands today. I hope it continues to thrive, finds new readers and helps to grow the sport of road cycling.

Illustrator and animator Yukai Du on moving to London, and finding her style

“I thought: will this be a hobby forever?” Dan Sandison on growing Mundial magazine

“I considered leaving all the time”: Rosa Kimosa’s account of managing anxiety as a student