Last year, exhausted by the grade-ticking criteria of full-time education, graphic design students Max Rawlins, Ross Norman, Sammie Purulak and Adam Morton-Delaney decided to take a year abroad. Moving from Kingston to Amsterdam and Munich, they each embarked on internships, hoping to find new inspiration and reclaim a sense of creative freedom. Relishing the feeling of creating work without the constraints of education or income, they made Peep, a publication that celebrates just that. Showcasing a range of side projects from emerging and established creatives including the likes of Eike König (Hort) and Erik Kessels (KesselsKramer), the publication launched successfully in Amsterdam, and garnered a wave of positive feedback. Returning to university, the team continued with the project, and launched their second edition in London earlier this year. Peep even went on to win a D&AD New Blood award this summer, is stocked globally, and – having just completed their third year – the team are now working on the third edition. Co-founder Adam Morton-Delaney expands on what happens when you relocate to a new environment; and the benefits of taking an anti-work, pro-play approach.

Newfound freedom was our fuel
Our year abroad gave us the opportunity to explore the unfamiliar. We each had fresh internships to find our feet with, a new language to struggle with and an unfamiliar city – Amsterdam – to get lost in. We found this new environment stimulating. We’d arrived in a new place full of new opportunities. It was the antithesis of Kingston’s graphic design course, a place we’d spent the previous two years and realised we’d become institutionalised within.

During our year abroad, we no longer had to respond to uninspiring briefs or tick-graded criteria. We were free to explore our creative practices on our own terms, away from the constraints of study. We could do what we wanted. Inspired by newness and with no tutors to please, we found ourselves pursuing side projects.

“We wanted a way to celebrate creativity without constraint.”

Our newfound anti-work approach to creativity was freeing, and we wanted to share it. We wanted a way to celebrate creativity without constraint, so we came up with Peep, a magazine that celebrates creative side projects and play outside of work. The word ‘work’ is banned in Peep. By featuring side projects by both established and emerging creatives, we aim to inspire our audience to engage in their own interests on their own terms as side projects.

Side projects are created from an unadulterated process. Without a boss, client or tutor looking over your shoulder they’re the purest form of creativity, say the most about the individual, and help creatives develop their own practice. Plus – and maybe most importantly – creative play is fun – which is probably why the results are so interesting. To be able to have fun with a project without impressing a client, boss or tutor is what makes them so valuable.

The second issue of Peep

Selling out spurred us on
Issue one launched successfully in Amsterdam in 2017. We did a small run of magazines that sold out during the launch weekend, and received plenty of positive feedback. We had some encouraging conversations about side projects during the launch – people told us that Peep inspired them to share the personal projects that they’d been working on quietly in the background. It gave us belief in the idea. We managed to launch a magazine as a side project away from uni, in a new and unfamiliar place, alongside our day jobs – plus, people liked it and we sold out.

At the launch weekend we had visitors from across the Netherlands and even had some people fly over from Manchester which really spurred us on. We realised we had something that people were willing to get on a plane for, and that felt great.

“Working on Peep gave us the space to challenge the university system.”

Being masters of our own fate
We kept the momentum going after returning from our year abroad and going back into our final year at Kingston. Working on Peep gave us the space to challenge the university system. As well as responding to university briefs, which were sometimes difficult to get excited by, Peep gave us an excuse to pursue our interests in side projects beyond the university studio. We were masters of our own fate with this project. It felt like we were defining our own practice in our final year, away from our sometimes-constraining course. 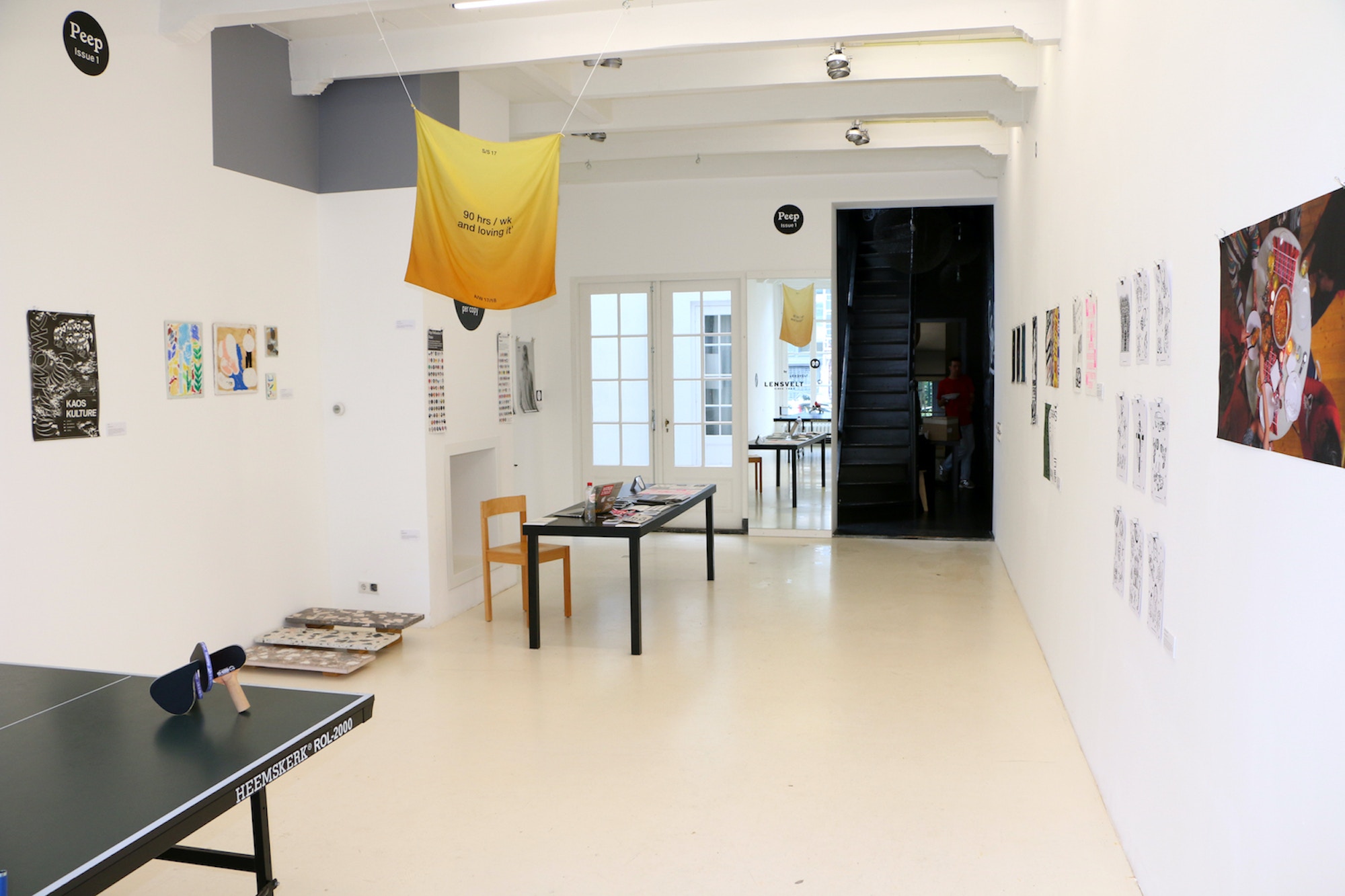 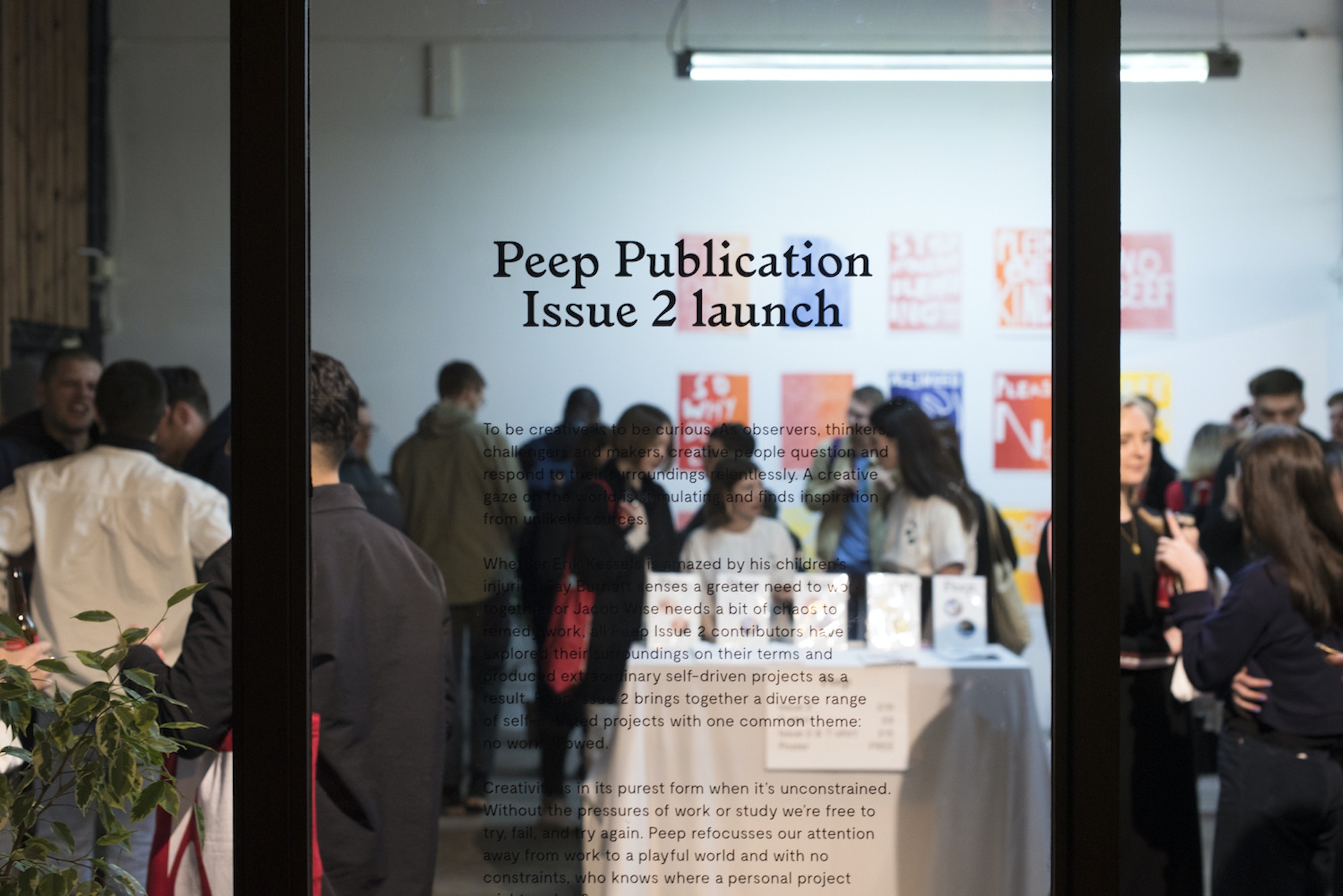 Creating conversation, community and opportunity
We made links with other universities and creatives globally, which felt enriching. And we got Peep stocked in the UK, US and Europe, which meant people started to notice our push away from work and pull into play.

A happy side effect of Peep was how, in our final year of study, it facilitated lots of conversations with industry. Rather than just speaking with studios about getting internships and jobs as everyone else seemed to be doing, we were actively asking the studios and creatives that we admired to be a part of our magazine. This felt far more organic than pushing for employment. Without the conversations facilitated by Peep, none of us would be in the employment positions that we are now. It was never our intention to use Peep as a way into industry, but that’s certainly how it panned out.

We like to think that Peep has opened people’s eyes to the fulfilment that projects made with creative freedom, away from work or study, can provide for the maker. Photographer Jay Russell said that he’d never openly called his own projects side projects – just bodies of work that allowed him to explore subtle nuances driven by his own curiosity. Designer Jacob Wise also recognised how they gave him a space to develop and explore his design skills. And for Sarah Houghton of Protest Press, side projects have the most passion behind them because they often have to be worked around everything else.

“Without the conversations facilitated by Peep, none of us would be in the employment positions that we are now.” 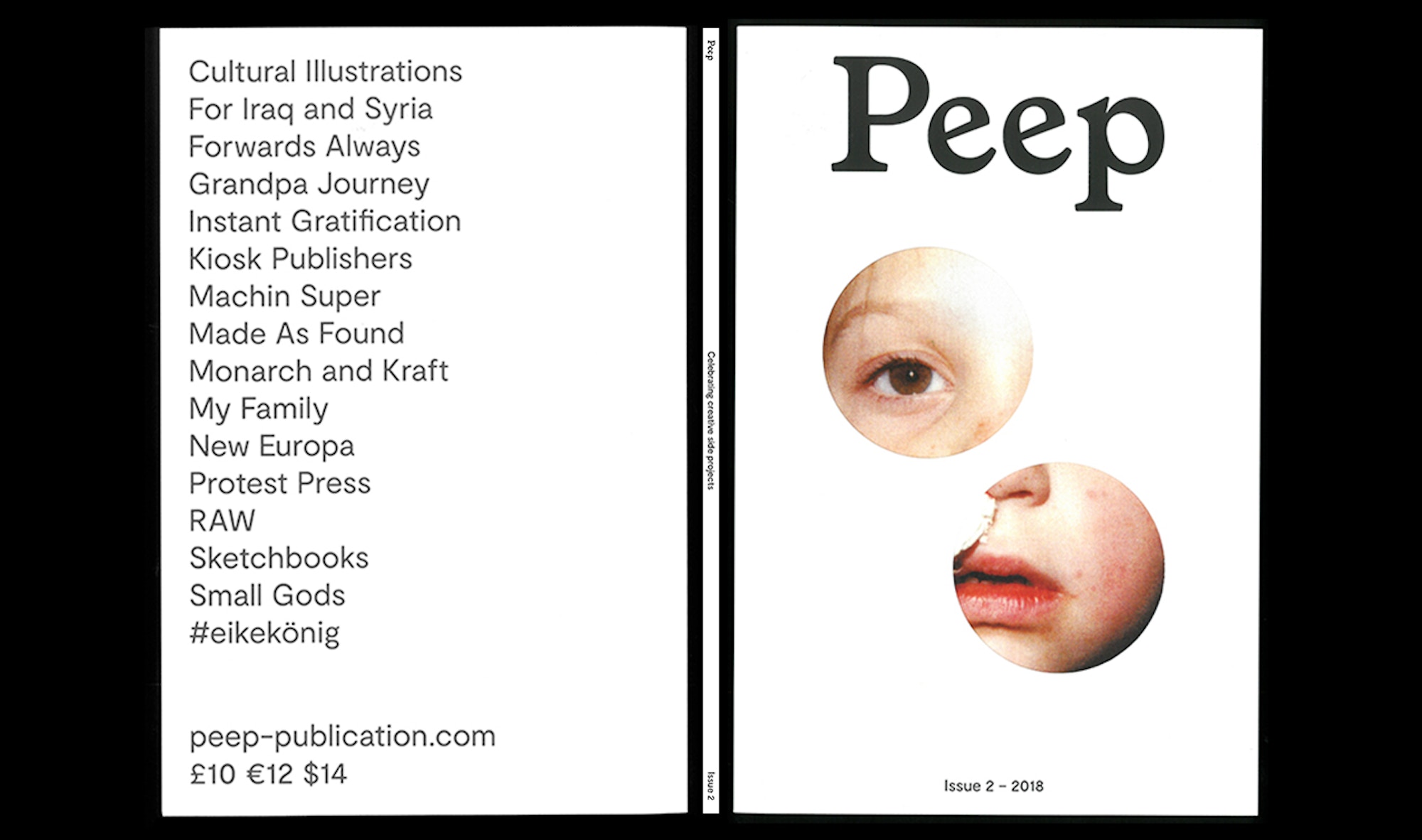 Becoming an award-winner
We applied for a D&AD award because we thought the calibre of the award would help to bolster the magazine: to get more people talking about it and, more importantly, Peep’s pro-play message. Winning was a fantastic experience, and we were pleased to receive lots of new interest in the magazine. We featured in the D&AD New Blood exhibition at the Truman Brewery, were published on the D&AD site, and captured some of the attention that winning a D&AD award attracts from the creative world. Winning the award helped give the magazine some traction in the busy creative industries. Now, we want to inspire ever-more unconstrained creativity as we move forward with issue three and beyond. We’re excited to see where Peep will end up.

Looking for some screen-free inspiration? Here’s a guide to all our podcasts from 2020