Inspired by a mix of album covers, punk, psychedelia and skateboard art, Bristol-based illustrator and graphic designer Patch Keyes keeps his influences broad and varied. “It becomes very obvious when everyone is pulling from the same inspiration,” he says. Now, he draws from more “esoteric sources” for clients like Pitchfork, The Vinyl Factory, Mixmag and Ninja Tune, while his work comes littered with retro-inspired characters and plenty of texture. We caught up with Patch to find out more about how he juggles the financial side of being a freelancer, and why there’s no shame in taking on the less ‘cool’ jobs to pay your bills. 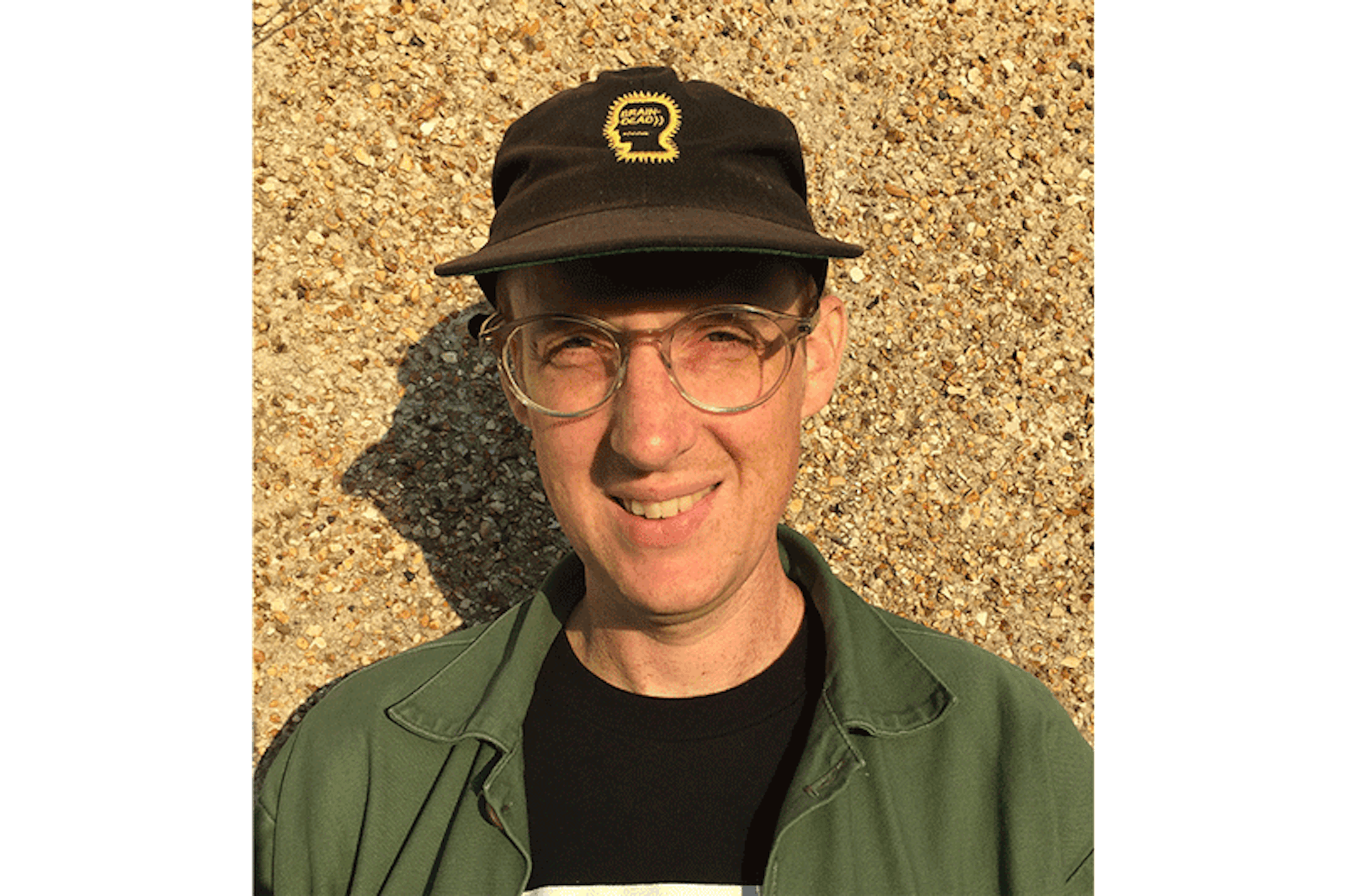 How would you describe what you do?
I am a freelance Illustrator who also takes on graphic design jobs, either by proxy or necessity. I tend to work for clients within the ‘underground’ music business, whether that be labels, promotors or sites associated with music journalism. I also occasionally work as a freelancer for production companies doing style frames or bits of animation here and there.

What does a typical working day look like and where does it happen?
I work from home now, for better or for worse – I can’t really justify the cost of a studio space at this point. I’m lucky that we have a small spare room that I can set up in, so it feels like an actual work space rather than having to work in the kitchen or bedroom as I’ve had to do before. I get up around eight and try to stick to a nine-to-five workday if possible, it depends on the workload.

When working on multiple projects, I usually just swap over to a new project when I’m waiting for feedback on another; it feels a lot like juggling for the most part. I try and take at least one short break per day to give my eyes a rest, luckily my dog Dot makes sure I leave the house at some point every day!

“Having something tangible out there in the world to be enjoyed for years to come is a great feeling.”

What are the most and least enjoyable aspects of your job?
The most enjoyable aspect of my job is without a doubt creating artwork that ends up in print – particularly something like a record sleeve where it’s been a journey to get everything together – starting, of course, with the music. Having something tangible out there in the world to be enjoyed (hopefully) for years to come is a great feeling. The worst part of the job is the admin and having to constantly chase up invoices.

What skills would you say are essential to your job?
Aside from the obvious, I think the main essential skill would be perseverance followed by some level of organisational skill. I’m only just getting the organisation thing down, to be honest.

What tools do you use most for your work?
I use a mixture of analogue and digital techniques; I love using brush and ink or a Pentel brush pen and other mark-making tools, then scanning and composing in Photoshop. I print and re-scan areas of my work to get some extra texture in there as well – I think it’s nice to incorporate some physical processes. I also have a good digital database of textures and things that I can use to give my work a more organic feel.

I was a screen printer for years, so I always build my work up as though I’m making something for print. I also use a Wacom tablet for drawing directly into Photoshop – this is really good for when time is tight and, to be honest, I’m not sure if you can even tell the difference in the final outcome. 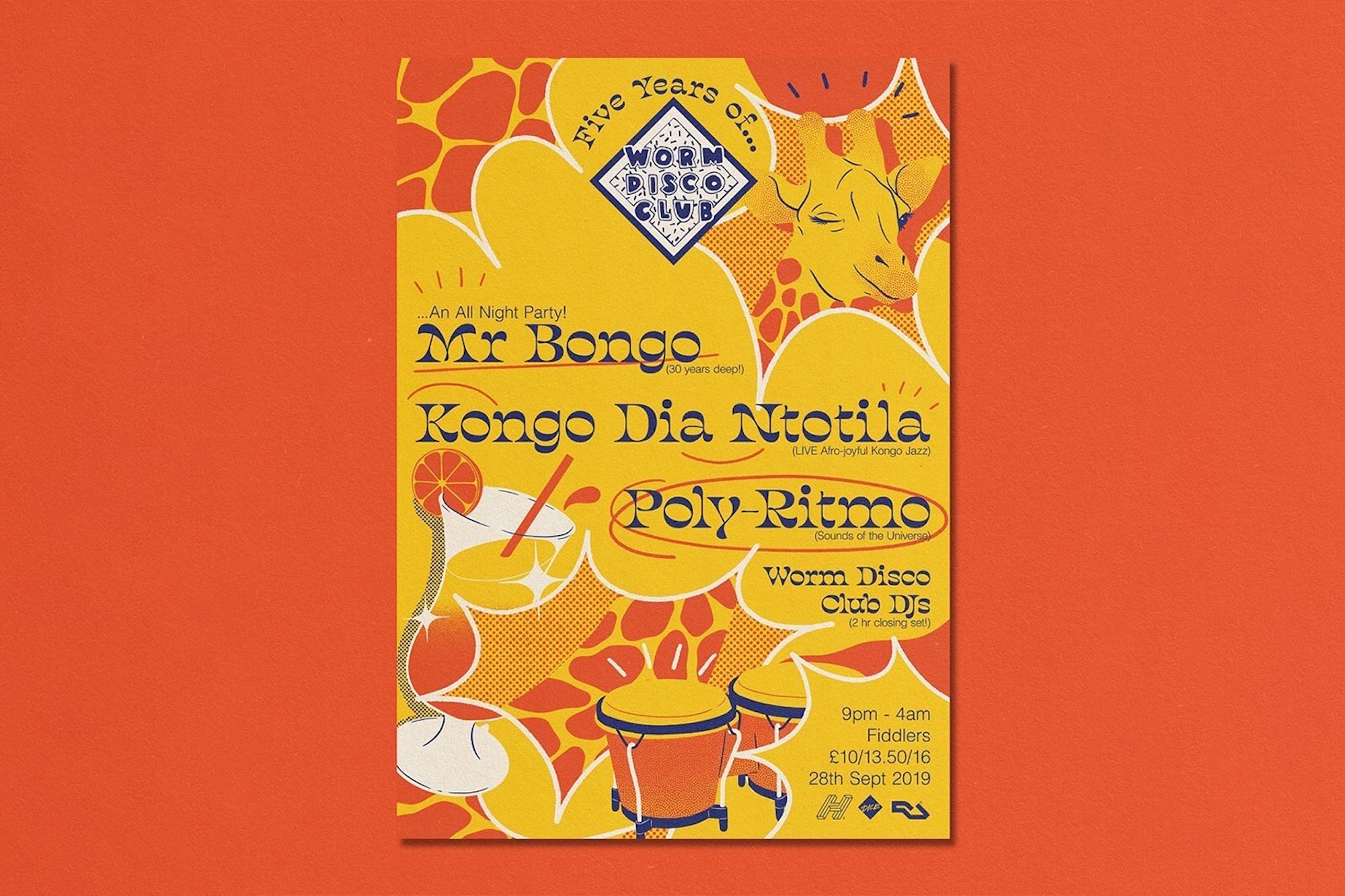 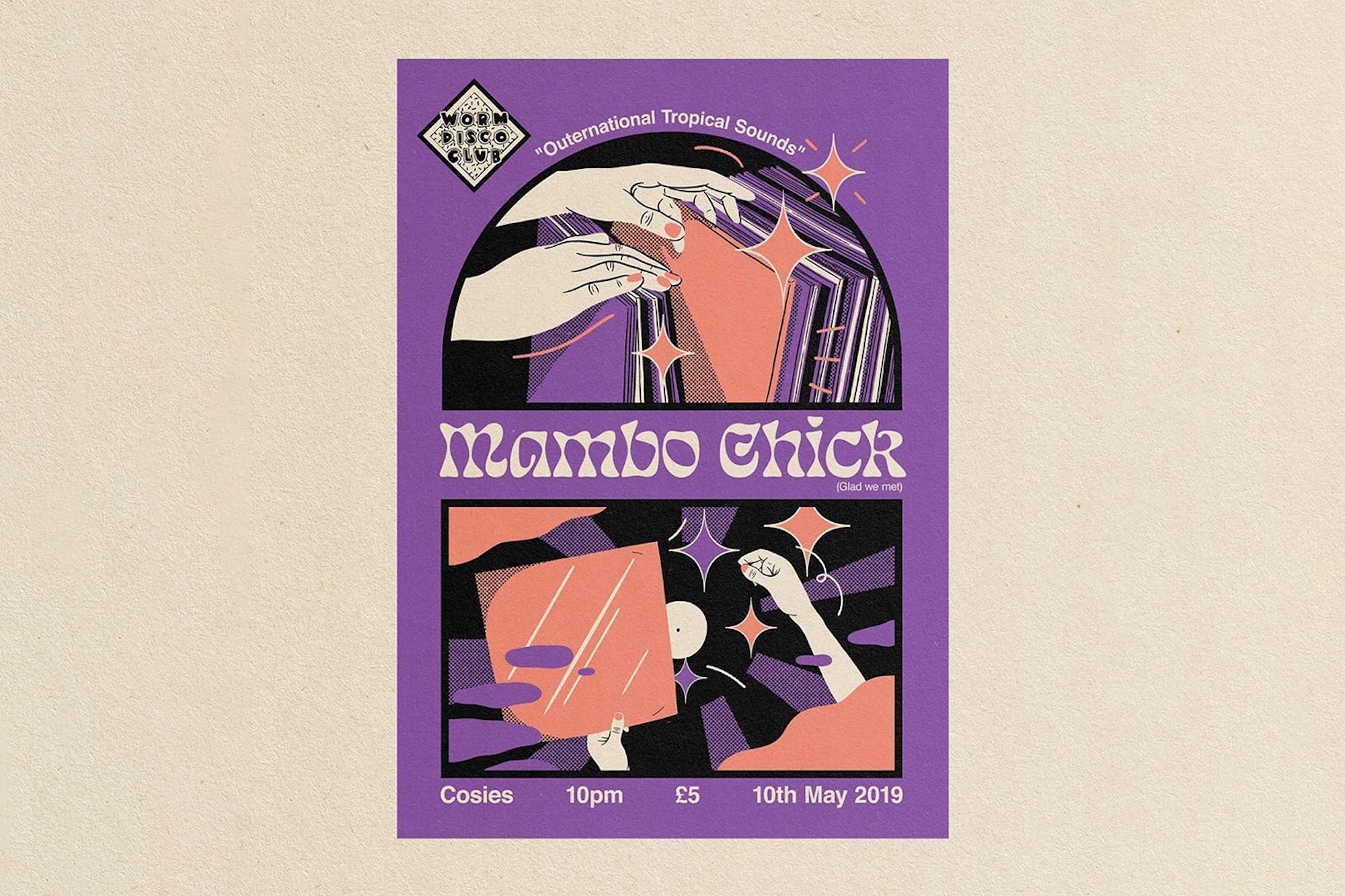 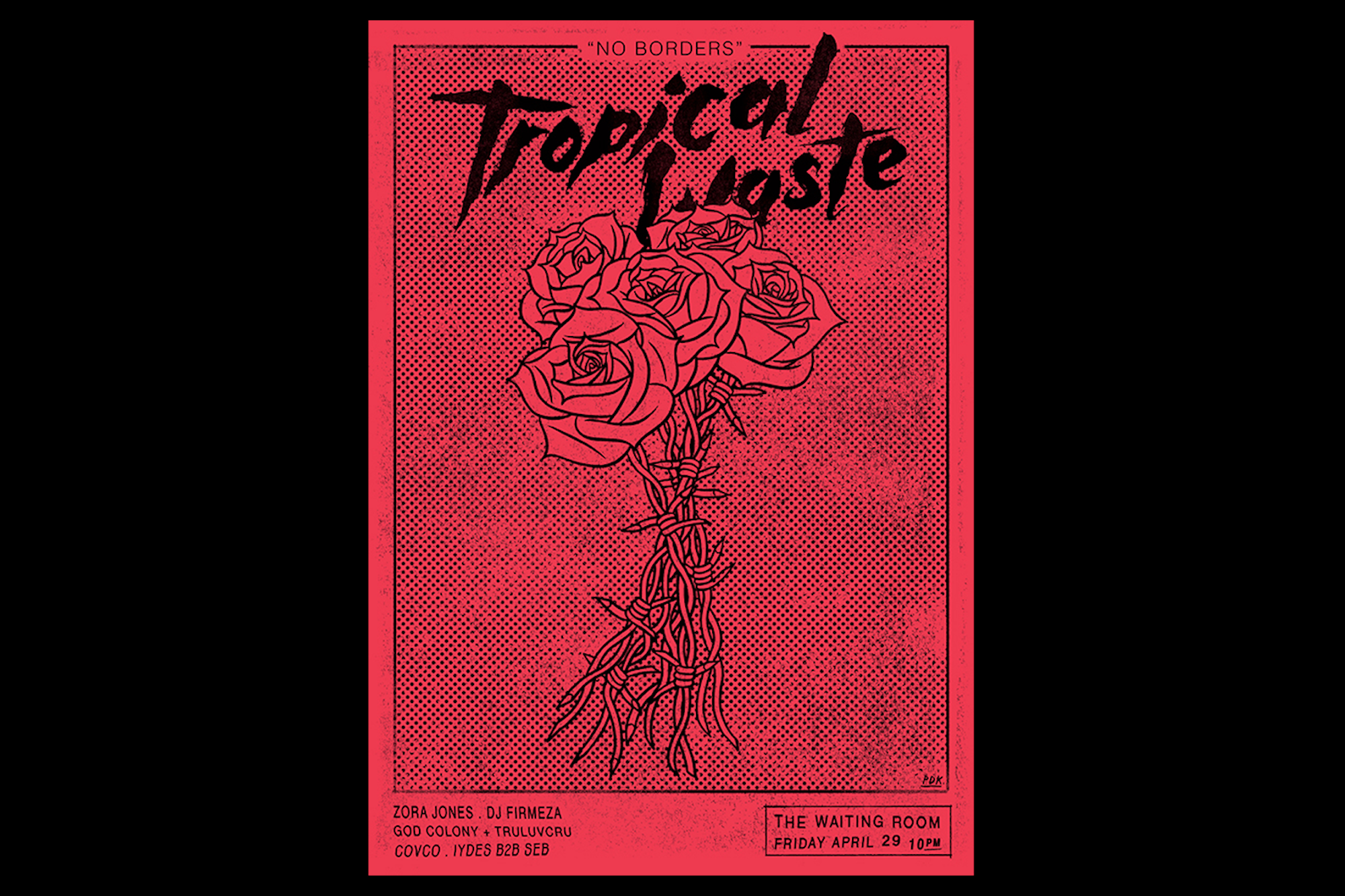 What inspires your work? And how important do you think it is to land on a particular style?
Like most illustrators or artists, I’m inspired by a lot of things; starting out it was always album covers, punk, psychedelia, skateboard art and so on. Now, I guess the inspiration comes from more esoteric sources. I spend a lot of time scrolling through weird image databases and online collections of various ephemera. It becomes very obvious when everyone is pulling from the same inspiration, so it’s good to keep it fresh.

“I used to think having a distinct style was the key to becoming an illustrator but I’m quite happy to play around with styles.”

I used to think that having a distinct style was the key to becoming an illustrator but actually I’m quite happy to play around with styles a bit – especially when I’m creating work for different clients that are operating within roughly the same area. It’s nice to be able to give them something more tailored to their brand, rather than saturating that scene with the same kind of thing. I’m not sure how much work I’d get if I rigidly stuck to one style anyway. 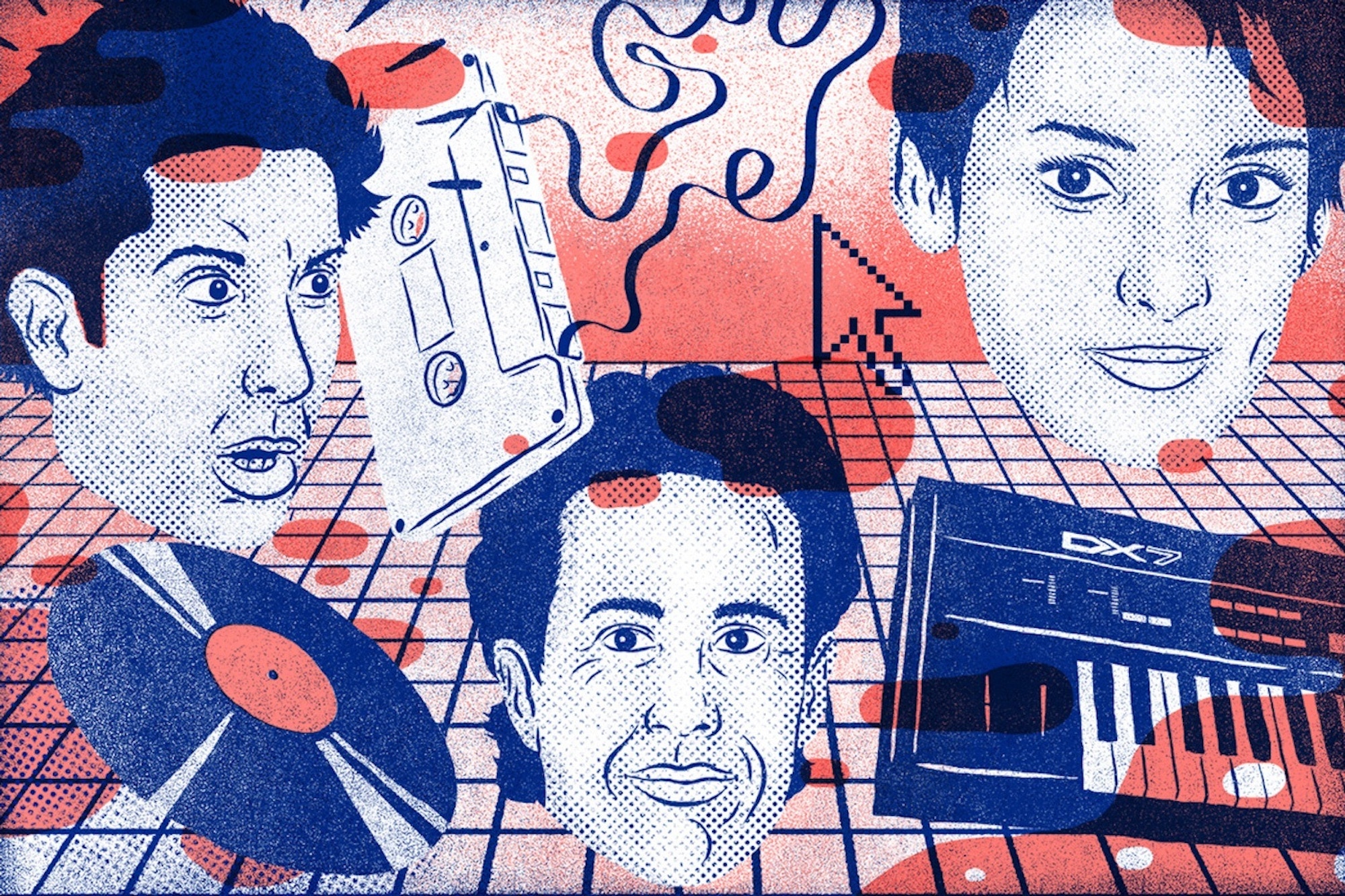 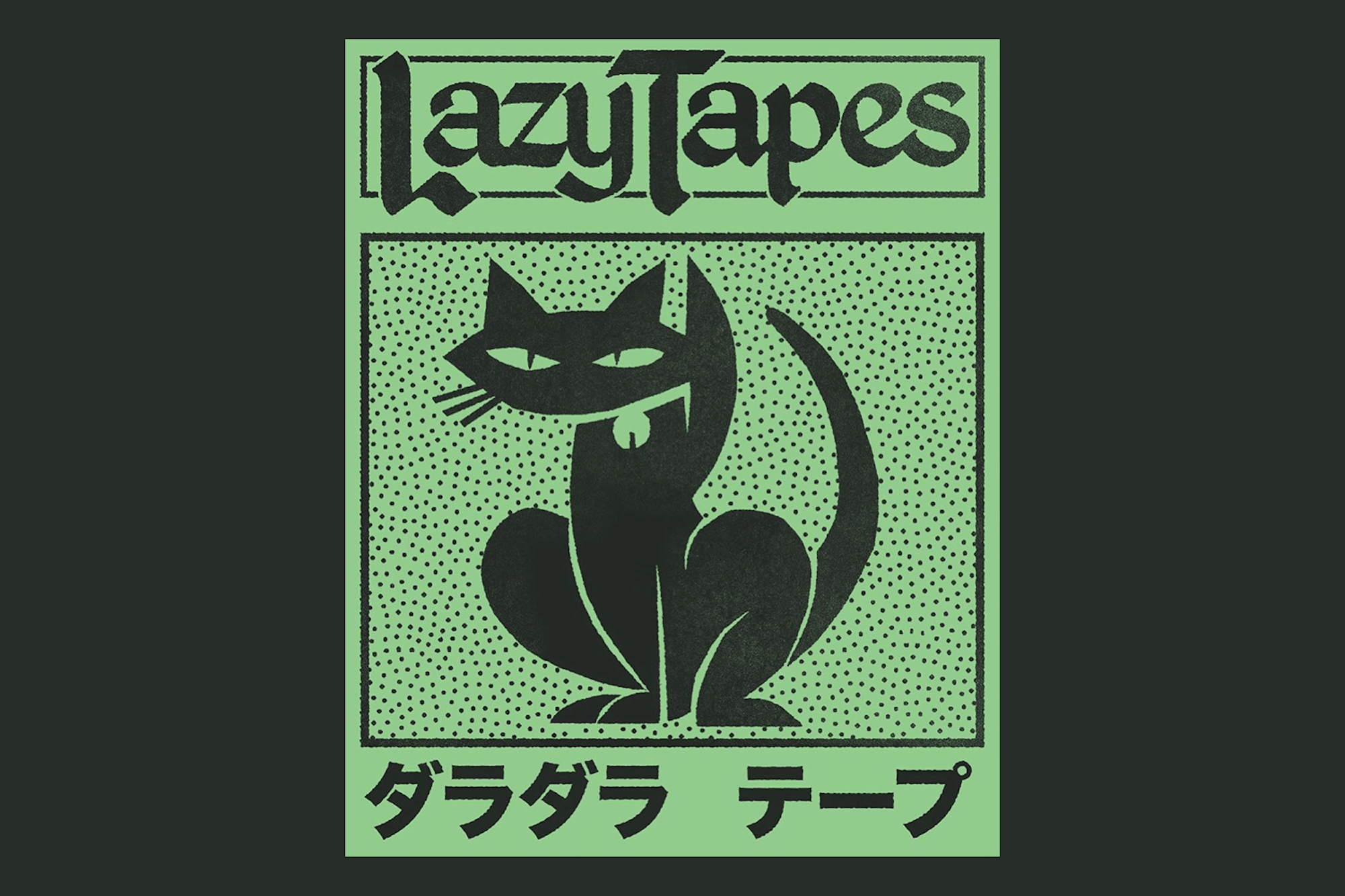 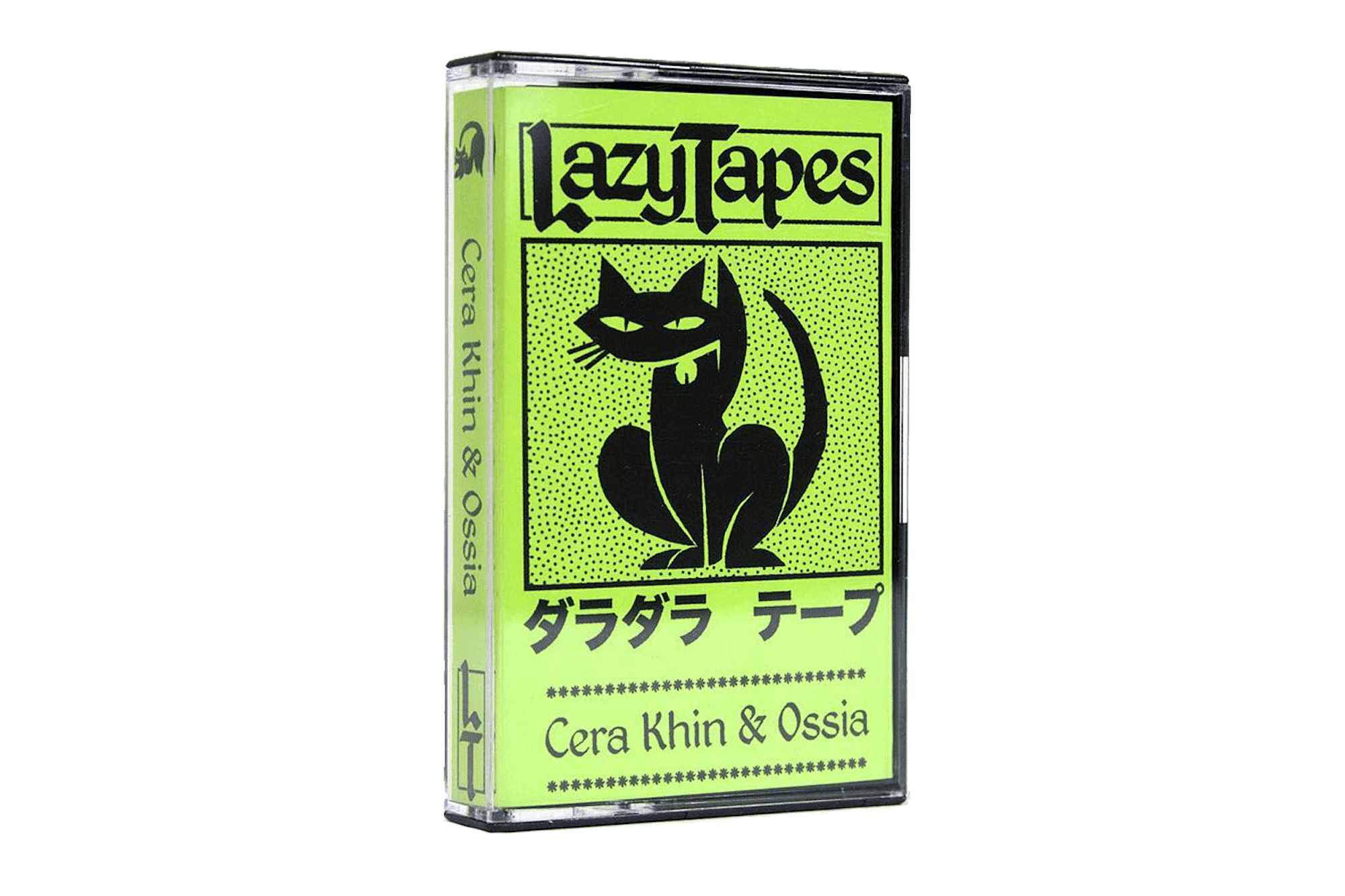 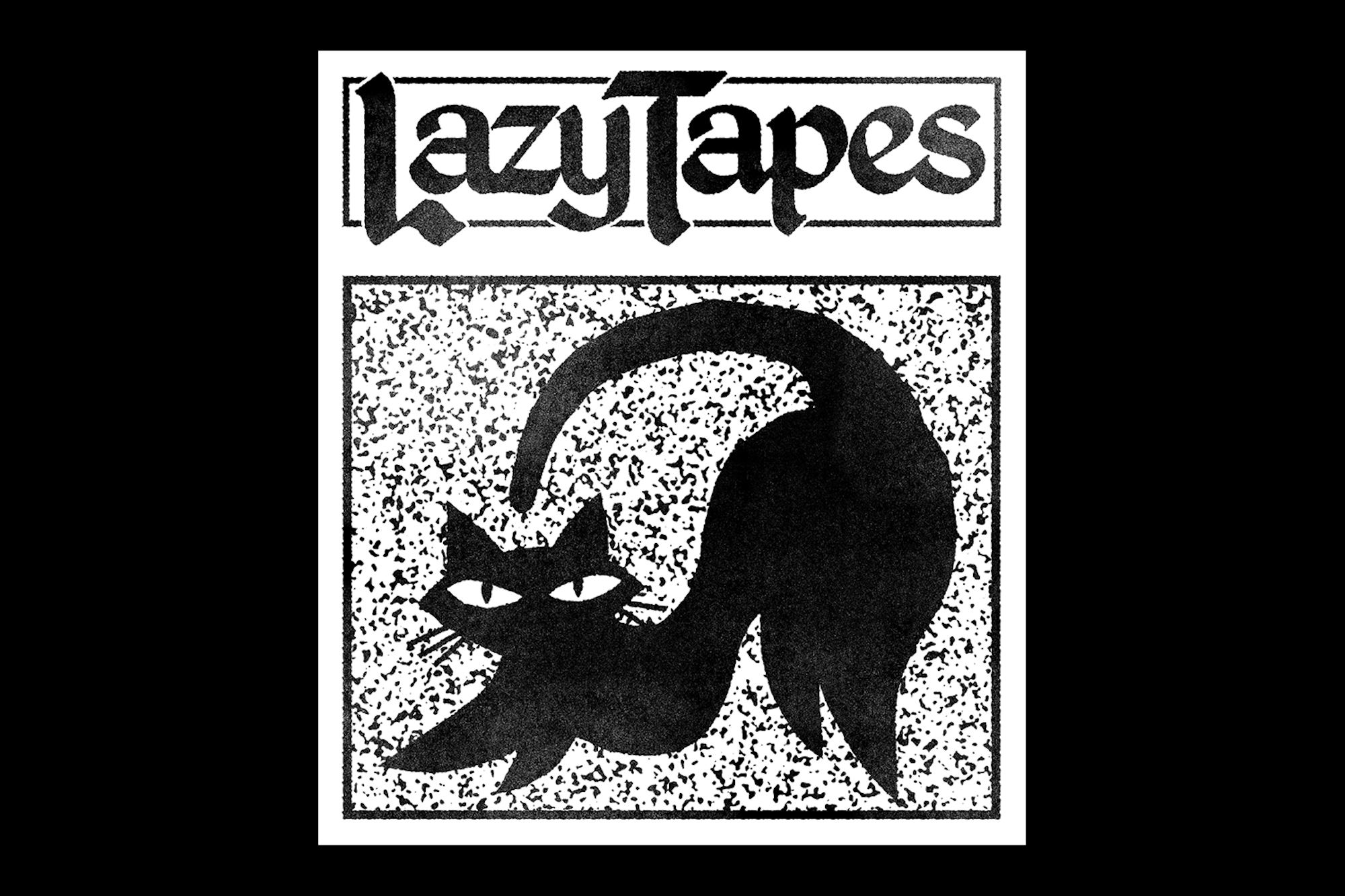 Did you study at degree level and if so, do you feel you need a formal education for what you do?
I went to Bath Spa university a couple of years after finishing college as I really wasn’t sure what to do – I knew I needed to get out of Devon so I thought I’d apply. It turned out to be really important for me; my college course was so basic that I turned up to university having never used an iMac or any of the Adobe software. Getting some training in that was invaluable.

Nowadays it’s not as essential to go to university. School and college courses are probably better equipped to get students to a level where – along with what’s available on the internet – they can probably just get on with it if they are determined enough. Plus, it’s so expensive now.

Some of Patch’s university work

After graduating, what were your initial jobs or steps?
I was asked by the university if I’d like to work as a technician in the screen print studio for a couple of days a week. So I commuted and did that while living back in Devon and simultaneously working in a kitchen to save and move to Bristol. Once I moved, I stuck with the technician job but it was never full-time, so I had to do so some call centre work to subsidise my income.

At the same time, I was part of PUCK collective, which had just been formed by my friend Robbie Wilkinson. Along with the screen print facilities, these two were my impetus to keep making work. I eventually left the technician job and worked as a screen printer, mainly printing T-shirts at [lifestyle store] Chemical Records in Bristol. That’s where I met a lot of people involved in music and where I got my first few proper paid illustration jobs, roughly three years after graduating

“Staying up until three in the morning and working everyday is not good for anyone.”

What’s been your biggest challenge along the way?
The biggest challenge has been learning how to conduct myself as a business person – talking money with clients, keeping financial records and tax returns. That stuff can be pretty overwhelming, so I took help from wherever I could – luckily my dad had some experience in doing his own tax returns, so was happy to give me a hand with mine. I learnt pretty early on to not rely too heavily on particular projects to come through, as they can quite often just disappear into thin air after a few emails. So it’s always good to have a back-up.

What would you say are the biggest challenges associated with being freelance, and how do you deal with these?
The biggest challenge is usually having either too much or too little work. It’s also really important to have time away from your job, otherwise you just end up resenting projects rather than doing your best. And if you have too little work, it’s important to try and use that time wisely either on self-initiated work or just as time to relax! Staying up until three in the morning and working everyday is not good for anyone. 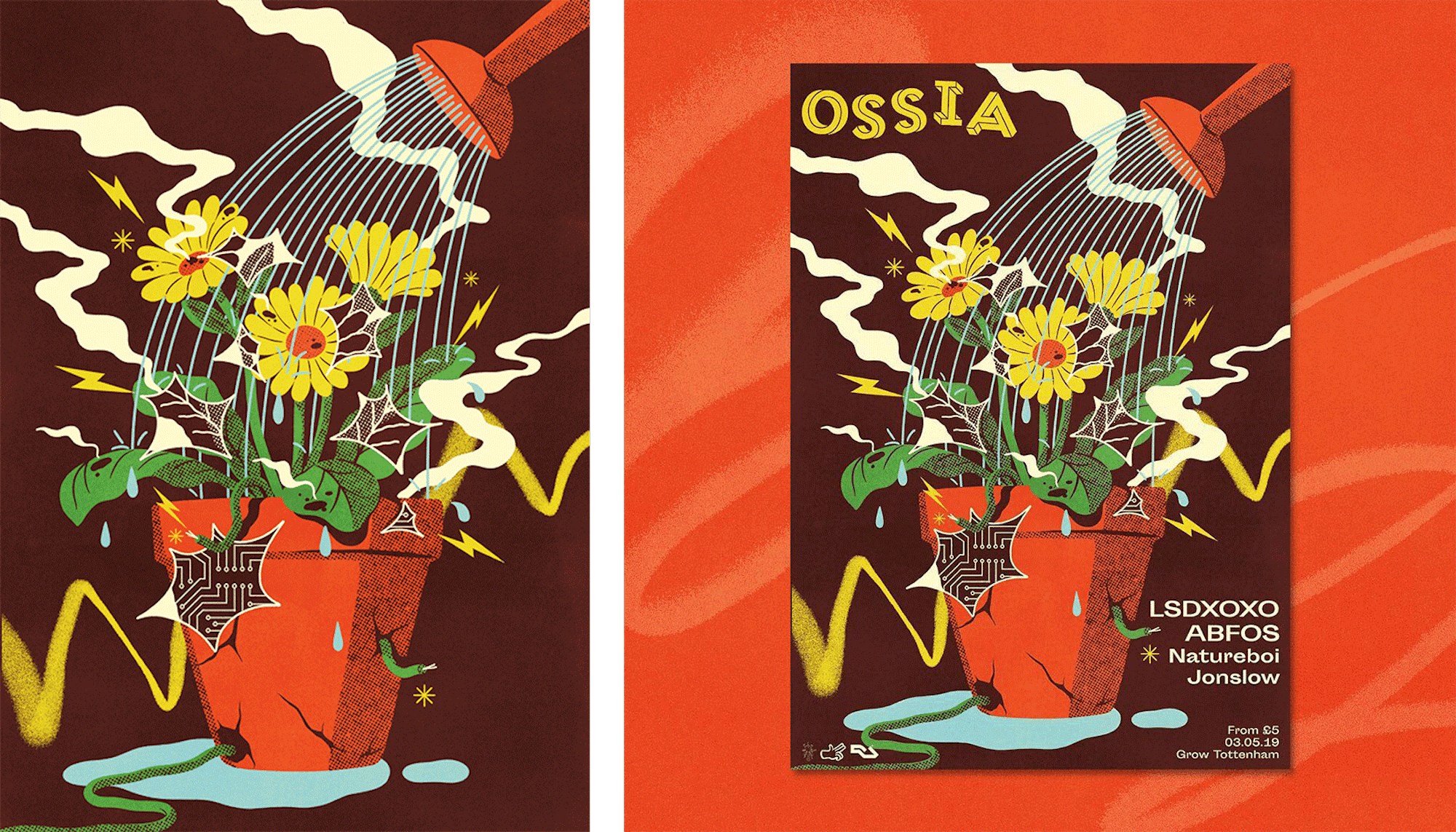 What have been your biggest learnings with making money as a creative?
I think this is an ever-evolving learning curve to be honest, but for me, the most important thing is to never work for free. I find it’s better to stand my ground as it doesn’t serve me or the wider profession to give work away for nothing.

There’s no shame in taking paying work that isn’t ‘cool’, as you can just do it anonymously to pay the bills, or maybe get a couple of shifts at a pub. In my opinion that’s better than working for ‘exposure’. I’m lucky that I’ve been approached by production companies for freelance work in more recent years, so I’m often financially saved by that. I do really wish that illustration was seen as the trade it was years ago.

“There’s no shame in taking paying work that isn’t ‘cool’ – that’s better than working for ‘exposure.’”

How important have you found social media and self-promotion in your work?
I really struggle with self-promotion, it’s just not something that’s in my nature and I feel embarrassed by it if anything. Social media is something that I think can be massively helpful if you put the time into it, but it’s probably more damaging than it is useful as it’s just not real life. If you have confidence issues or imposter syndrome, for example, then it’s just an anxiety pit! I try not to put a huge amount of pressure on myself to post things online, although I do realise that I have to keep it ticking along so I don’t just disappear off the face of the earth. What advice would you give to an emerging creative wanting to get into the same line of work?
I would say that, above everything, perseverance is the key. I’m not one of those people that got picked up for work right out of university; I still needed time to get my work to a better level. I worked on personal projects and exhibition stuff with PUCK collective while I had a day job, and eventually things started coming together three years or so after graduating. It’s not an easy living, but if you get your head down, even if it doesn’t happen right away then you’ll find a place for yourself somewhere down the line.

How burnout changes your approach: The Other Box’s Leyya Sattar

How to nail your creative identity, from personal branding to ‘About Me’ texts

Allow yourself some downtime! Conor Nolan on battling creative frustration

From their bedrooms to a home studio, ceramicists Liv and Dom Cave-Sutherland talk to us about their evolution

Oliver Sin on working in Cheltenham and balancing work as an animator, director and illustrator