Over the past year, the illustration landscape has most certainly shifted. In short? Business is booming. New opportunities are opening for illustrators, whether that be due to the impact of wellness and veganism to shifts in start-ups and editorial illustration. So how do you make the most of this as a recent graduate? As part of our insight report, we spoke to Lou Bones, membership manager at The Association of Illustrators, to find out. Here, we pick her brains about some of the current changes, and ask her advice for emerging graduates.

Illustration is booming
There’s never been a better time to be an illustrator, but there are tonnes of illustrators out there. There’s so much appreciation for illustration right now. Ten years ago the scene was very digital. It was all vector-based, and digital photography was a huge thing. But those things actually sometimes don’t really connect with customers very well. For packaging or for advertising, illustration can usually do that much better than a piece of cold graphic design or a piece of photography.

The illustrators that are doing well are the ones that are educating themselves to the kind of fees that they should be getting and they’re pushing the client for those fees. They’re setting the tone of voice for everything; they’re not just a service provider for the company. They negotiate their contracts properly. They understand that they are a business, so they’re pushing themselves on social media. They have a self-promotional strategy.

Designers are becoming illustrators
In the last year, we’ve seen a huge increase in people who’ve had a career in graphic design becoming illustrators. Perhaps when they graduated they didn’t see illustration as a viable career. But the shape of the industry now – how it’s contributing to the design industry, the kind of jobs that people are doing, the kind of clients people are getting – it’s really come on in the last three years. So much so that designers who in their hearts were really illustrators are coming back.

New arenas for illustrators
Editorial illustration has changed. Where newspapers used to send photographers out to document Afghani women freedom fighters for a couple of weeks or months, now they’re sending illustrators to do that reportage. That wasn’t really happening before. Another whole industry that’s popped up in the last two years is wellness and veganism. Because it’s about health, it works perfectly with illustration. We’re seeing a whole new wave of commissioners that weren’t really there before.

“You shouldn’t be pitching yourself as an up-and-coming illustrator or a recent grad. You are an illustrator and you should get paid as one.”

Start-ups spell more work, with risks
Every time there’s an economic collapse, there’s a rise in start-ups. Craft beer companies, tech startups, self-published authors – all these amazing new people out there who totally want to work with illustrators, and have great ideas. It’s not a reason not to work with them, but we class all of those people as high-risk clients for illustrators. They may be lovely people, but they’re rarely trained in business, and often don’t fully understand about copyright or licensing. Very rarely do they have the fee that’s associated with the amount of work they want. As a young person starting out in illustration, you will get targeted by those people. They expect that, because you’re young, you’re going to ask for smaller fees.

Knowing your worth
As a student or recent grad, you shouldn’t be pitching yourself as an up-and-coming illustrator or a recent grad. You are an illustrator and you should get paid as an illustrator. IT guys and plumbers dictate how long their jobs are going to take – the fees and contract – whereas illustrators tend to sit back and let the client dictate what happens. That’s not really how it should be. 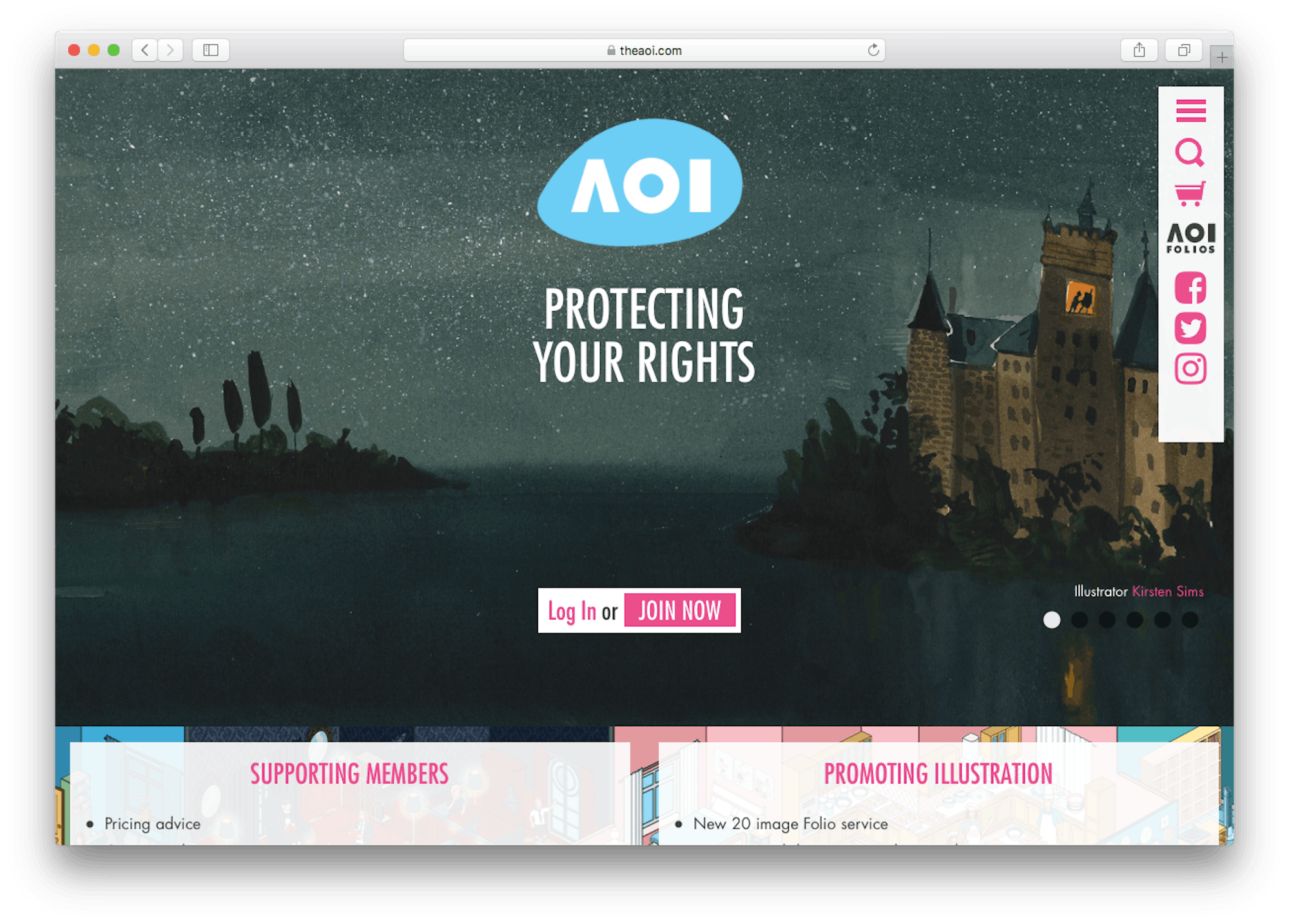 Negotiating fees and rights
Something we’re seeing pushed an awful lot from American clients is ‘work for hire’, where you work on an hourly or daily basis and sign a moral rights waiver, which means that you sell your copyright and don’t get credited for it. Therefore it’s not your work anymore but that of the client. In these cases, it’s about educating illustrators to say no, and also how to change that client’s mind.

While publishing is probably the one area that’s eroding illustrators rights the quickest, in 2017 for about 80–90% of the publishing contracts that we got in, we were able to negotiate more money and better terms. Children’s book publishing is up 15–20% in the last five years. It’s doing much better than children’s TV. Good fees for that kind of work are absolutely there, particularly if you’re from the UK, as English language means international clients.

The rise of moving image and VR
In the past year we’ve seen clients across the board want more moving image. The AOI is a membership body that was set up to advance and protect illustrators’ rights and encourage professional standards. In March it launched the Price It Right campaign, which aims to educate illustrators about licensing rights and help them to negotiate higher fees.

“[Clients] are looking for moving image, so it’s good for illustrators to keep themselves skilled cross-disciplinary.”

It doesn’t matter whether the client’s in advertising, corporate literature, merchandise, apps or children’s books, they’re all looking for moving image. This is going to become more and more important for illustrators, so it’s good for illustrators to keep themselves skilled cross-disciplinary.

When you go to someone’s website, it’s impressive if some of it moves, and it’s very easy to achieve. You can learn how to create a GIF in Photoshop via YouTube in one evening. It’s not about making huge narratives, it’s more about giving your image a little bit more depth. As a commissioner, when I come to your website, I’ve got two seconds to get the information I want from looking at your work. I don’t want to click anywhere. I don’t want to go searching for your best stuff. I want to see it right there and then. If I can see that you have another skill set, you’ve answered questions that I wasn’t even thinking about.

Some of our illustrators are working almost entirely in VR now. You should be pushing the boundaries and challenging yourself all the time, because the clients needs are only going to get greater. The more you can provide to the client and push yourself, the more interesting your career will be going forward. 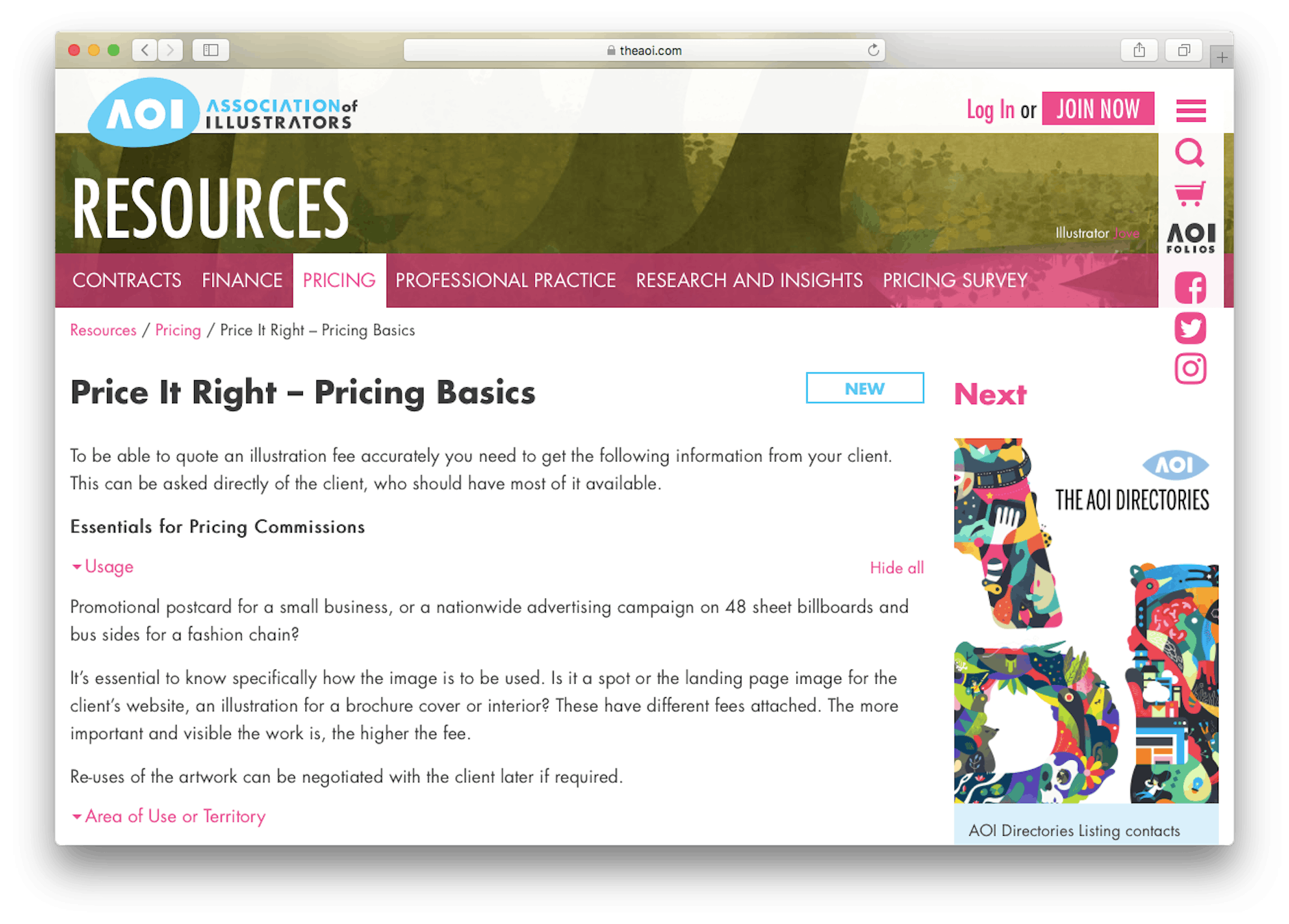 In March the AOI launched the Price is Right campaign, which aims to educate illustrators about licensing rights and help them to negotiate higher fees

The Price It Right campaign
Price It Right was something that we started with the European Illustrators Forum, which is a forum that’s made up of some of the other illustration associations in Europe. We’re trying to get other associations to wake up to the needs that illustrators are actually facing right now. The industry has changed an awful lot in the last three years. We need to get illustrators across the world to realise there are set fees for illustration.

Understanding fees: Editorial vs advertising
Each area of illustration has different licensing that’s standard. Licensing length for advertising tends to range from three months to one year. The fees range from between £6,000 or £7,000 for a full media licence for an illustration for a small to medium size company in the UK. But we can price an advertising campaign in the US for upwards of £90,000, just for one illustration. It varies quite widely in terms of advertising. Editorial fees are pretty small and have remained static. But if you’re an editorial illustrator, you’ll generally have back-to-back work and you’ll work internationally.

“Be realistic about how long something will take – and watch out for maps. They require a lot of work, even if they’re used quite small.”

Advice for grads
Make sure, before you start work, that you’ve actually got your contract down. Agree the fee and make sure you know the size of the illustration and where it’ll be used (for example, within an interior article, or on the cover). If you’re working for an umbrella company like Condé Nast, make sure you know exactly which department you’re working for. Be realistic about how long something will take – and watch out for maps. They require a lot of work, even if they’re used quite small.

Think about how to extend your skills. You might be able to screen print, make GIFs, or could host a studio visit – where clients come in and film you – or make time lapses [documenting the process]. Clients really want that stuff, it’s extra content for social media. Illustrators should pitch those things. If you’re creating a wine label by making a screen print, suggest to the client that they could make video of you screen printing to use as above-the-line advertising. Obviously, the illustrator will be paid extra for all of those elements.

This interview is taken from our Insight Report into Creative Careers and Starting out. Read an introduction here, or if you’re a Lecture in Progress member, download the full report here.
You can sign up to Lecture in Progress here. Plus, get further detailed information on illustration careers at theaoi.com

Hot off the press! Why these students chose newsprint for their favourite projects