Creative Lives — A day in the life of Lorna Dannielle Dumba, senior VFX producer and head of production

Posted 20 May 2020 Introduction by Anoushka Khandwala

If you’ve ever wondered what the work of a VFX producer looks like, Lorna Dannielle Dumba is here to debunk myths, reveal secrets and offer wise words on her role. Her journey began with a masters in aerospace design, and later pivoted into a role at the Moving Picture Company to work on the Harry Potter and James Bond film franchises. Fast forward a decade and Lorna counts HBO’s Game of Thrones and Netflix’s Stranger Things as some of her career highlights – particularly delivering a cinematic-scale production on a TV show budget. We spoke to Lorna off the back of her work for Sky and HBO’s new series Gangs of London with the team at Dupe VFX. 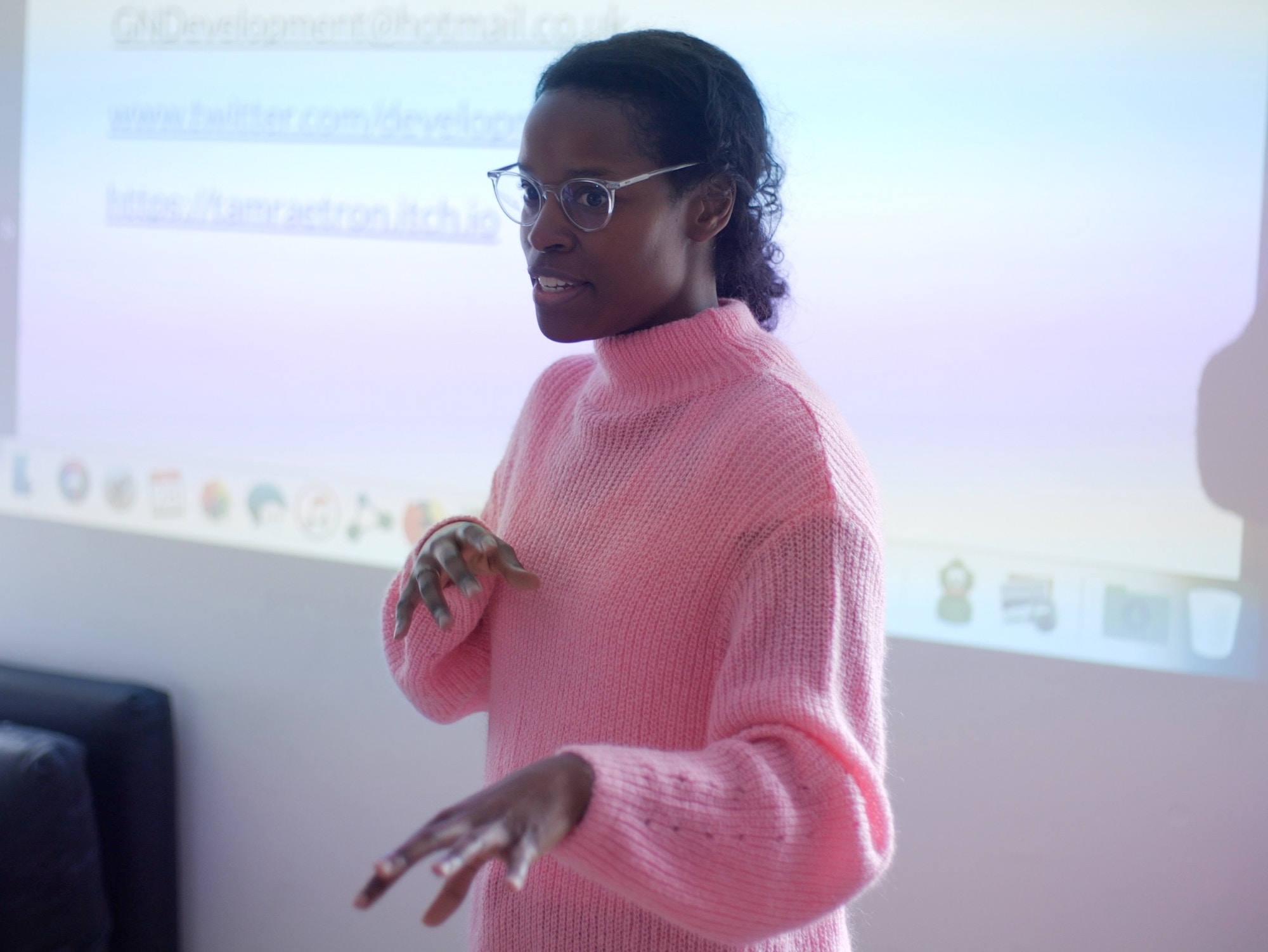 What does an average day look like for you?
I architect stories, so that people are able to discover their potential within projects. The critical part of a head of production and producer role is to be able to match the commercial side with the production side. The commercial part is making sure you are delivering on your customer’s requirements within budgets and timelines.

The production side is when you’re working with the talent (the artists), making sure they have exactly what they need, and that they have an understanding of what the scope of work is. It involves a lot of troubleshooting and ensuring that they’re delivering to the best of their capabilities.

For anyone who’s less familiar with it, can you tell us more about the world of VFX?
VFX stands for visual effects and it’s the craft of using computer technologies to create effects using visual images (very broadly speaking). The majority of the time this involves changing a piece of filmed footage so it looks different in some way. I was a vendor producer on season three of Netflix’s Stranger Things, which is a show that features spectacular forms of VFX. One episode required a location to be wrecked – so my team and I were tasked with recreating this using computer graphics (bits of separately shot footage) and integrating it with the actors’ performances.

“I do believe that we are entering very new territory in terms of the art of storytelling.”

How do you feel the industry is evolving at the moment?
I do believe that we are entering new territory, in terms of the art of storytelling. The technology and tools are advancing at such an accelerated pace that the creators, customers and the clients are all being given access to things that may not have been granted before.

Has the current crisis had an effect on your work?
It’s impossible to imagine any industry unaffected by Covid-19. In this crisis we’re re-examining what we do, how we do it and why it matters. We’re asking: What methods of work don’t rely on the physical – like virtual production? And how we can make things that exist outside of real world environments, like video games, VR [Virtual Reality] and animation? It’s also important to recognise that we don’t provide a critical service like our society’s heroes. We appreciate that we have the option to work remotely. With this in mind, our work must reflect what’s really important. Creativity needs to be more conscious of how it’s benefiting all stakeholders and supply chains.

Are you working on any personal projects?
I started a podcast about the industry called Culture in the Craft. As you gain more experience in what you do, it’s important to give back to those who are coming up behind you. This is particularly relevant in our industry, as there is a lack of potential candidates that come through our pipelines and into our roles. 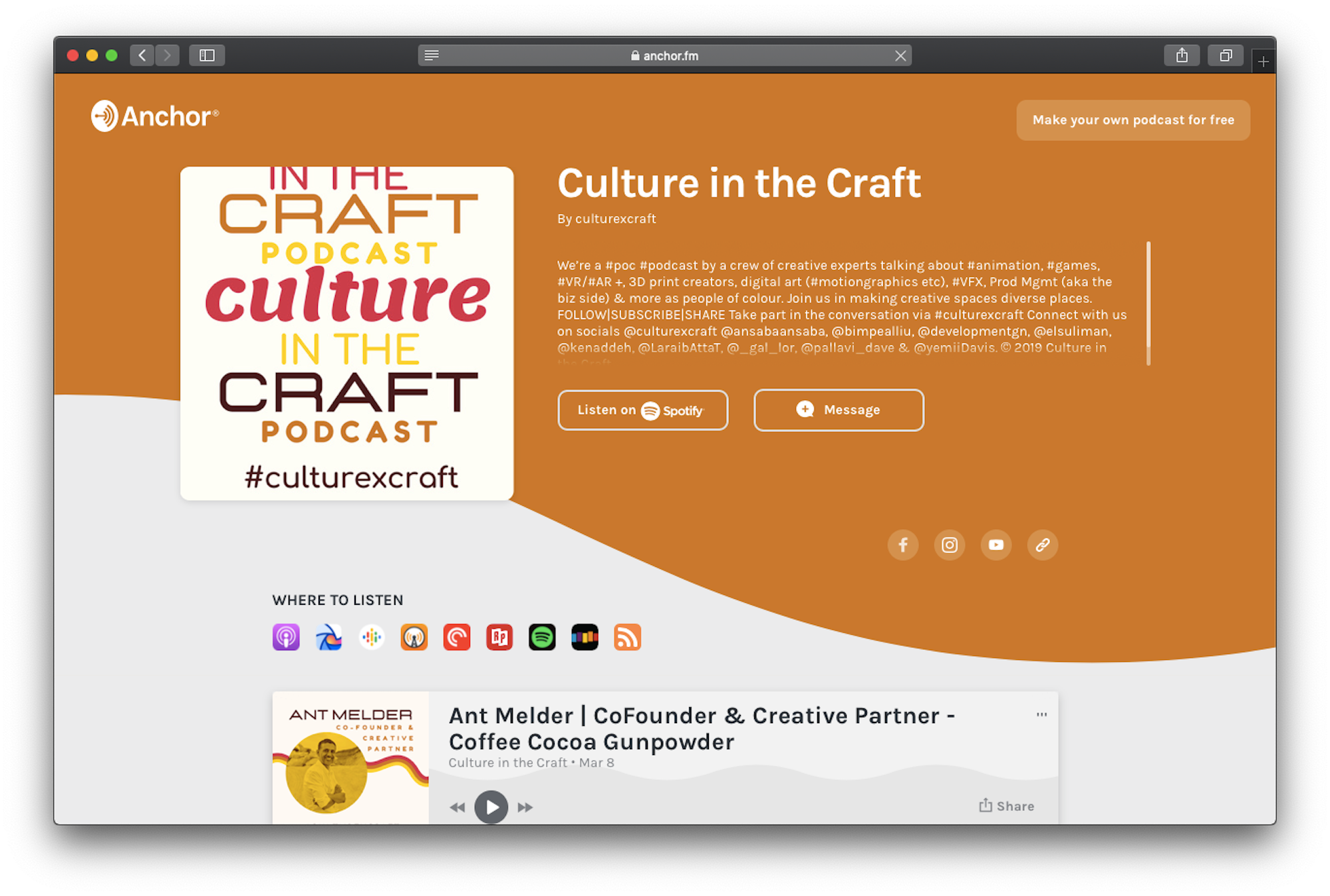 Lorna’s ‘Culture in the Craft’ podcast

Why do you feel like there isn’t talent coming in fast enough, is it because it relies on such a specialist skill set?
I think one challenge is knowing about the roles that exist within the film, TV and commercial sphere, as well as the growing game space. I think there is a lack of understanding on the pathways to getting into the roles – so there needs to be more education around that, not only within school systems but also within communities.

Did your upbringing have an influence on what you wanted to be when you grew up?
I was actually born in Kenya, Mombasa. My parents decided to move to London and I spent part of my very early years living in London. But then my parents moved to Wiltshire, and we lived in what was a small little village near Swindon. I grew up with what I would call a pseudo-rural life; it was very much about being outdoors.

Within our community, there was a heavy air force presence, and we had a lot of military people coming through. Because of this influence, I decided that I was going to train to become a pilot and join the RAF. I did the relevant studies at college, went to university and did an engineering degree, followed by a masters in aerospace design. I then landed a job with an airline, with the plan to train on its pilot scheme. But once I was in the environment, I realised how much it wasn’t for me. I always felt like I needed a bit of creative exposure, and there really wasn’t any.

“I experienced the life of a runner for a day and I was completely smitten.”

What were your initial steps?
I was hesitant to backtrack or side-step because I had invested so much time and money into engineering. However, out of pure chance, I managed to connect with someone I worked with at a hospital radio station, who asked if I wanted to join him in the work that he did. At the time, he was working as a runner on a famous music television show with Cat Deeley and Ant and Dec.

I experienced the life of a runner for a day and I was completely smitten. I decided I would figure out a way to change my career and move into this space. Working as a runner on the weekends meant I was pretty much working seven days a week. Eventually, I was offered a position, and then I just worked my way up. I moved onto another music programme and then worked at a creative studio that mainly did motion graphics. Finally, I got picked up by Motion Picture Company.

Having worked on Harry Potter and then James Bond – I was eventually offered the opportunity to look after the rotoscope [animator technique used to trace over motion picture footage, frame by frame] and the prep team. These are the people that pretty much take all of the footage and clean it up, and do any kind of tidy work before it gets compiled at the end of the pipeline. After this, I was positioned within the 3D team, setting up the shots, making sure that they sat in the 3D space correctly.

Then they expanded into Bangalore. I was overseeing the same team but also overseas, so I started getting exposure to the global team. I had so much fun – I made so many friends and contacts. Then I moved over to creative technology studio, The Mill, looking after Dr. Who, Dracula, Untold and Ex Machina, which won an Oscar for the VFX work!

Eventually, The Mill asked if I was interested in going to New York. I deliberated for a bit and then decided that I would take the plunge. I went over to New York, this time in an operational capacity, which was when I started to see the profit and loss. I learned how important it was to deliver forecasting and planning to the CEO. When you’re looking at specific costs associated with every decision that you make, it really does re-frame how you think about a project or a job. I ended up being out there for nearly a year and when I came back I decided to share more knowledge with artisan technologists in my industry through my company Graiss.

Do you have any advice for someone looking to enter the industry?
I would definitely advise seeking out industry platforms and events, when you can. I know it’s very difficult if you’re living outside of the main hubs, particularly London, but there are online tools that you can utilise.

I know there are a lot of facilities that now have academies, opening up the doors to junior and entry-level people. Get online, start a YouTube channel and create your community. That’s another way to expose yourself on your own personal terms, so you can build your own space with others that share the same interests.

Producer Brian Kaczynski on Netflix, freelance paranoia, and being a good ‘fixer’