Creative Lives — Artist Lakwena: “I thought I’d do something I believed in, rather than chasing cash”

London-based artist Lakwena Maciver combats the pessimism of our contemporary social and political climate with empowering statements. “RAISE YOUR HOPES”, “THE BEST IS YET TO COME”, “TOGETHER WE STAND” are just some of her large-scale mural works’ bold declarations. Combining vivid colours and decorative patterns, she creates artworks that draw on both her background in graphic design and her own personal history. From London’s Boxpark Shoreditch and Cricklewood Station to Fort Smith Juvenile Detention Centre in Arkansas, America, these messages of hope and affirmation radiate across their urban environments. We speak to her about her path to becoming a full-time artist, how she negotiates between personal and commissioned work and using art as a means of self-assertion. 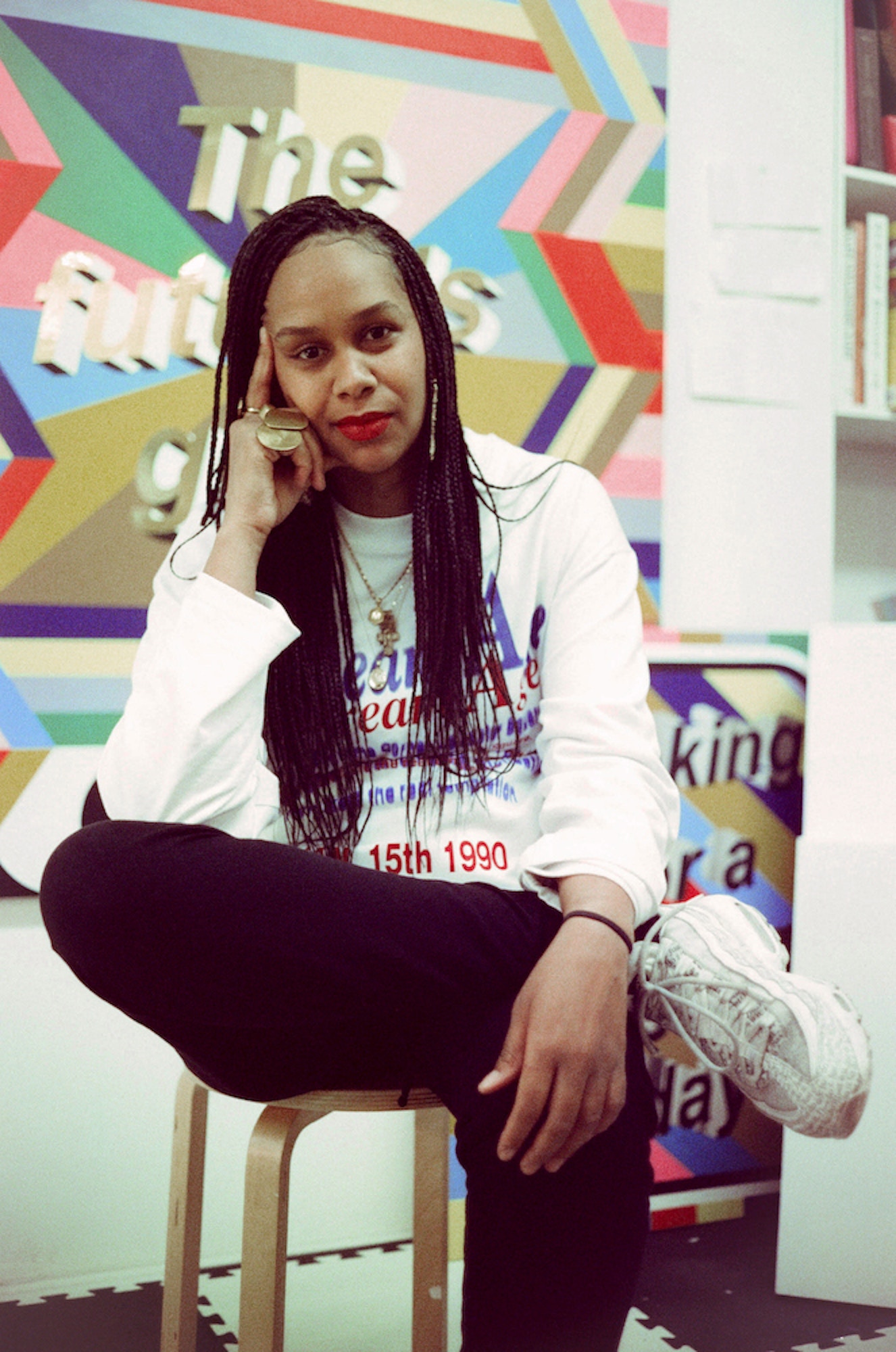 Lakwena in her studio, captured by John Ogunmuyiwa

How would you describe your job?
I’m an artist. I have my own practice making paintings and I do commissioned work alongside this – predominantly large-scale public murals. I also sometimes collaborate with brands on products or campaigns.

What does a typical working day look like for you?
I work from my studio above Ridley Road Market in Dalston. Every day looks different depending on what projects I’ve got on. There’s always a lot of admin and answering emails – that doesn’t change. Sometimes I’ll be planning a mural, sometimes reading and writing as research, sometimes contacting suppliers, sometimes I’ll be outdoors painting a mural, sometimes prepping boards to paint. It’s very varied. I also often travel internationally to paint murals, or to exhibit work abroad.

How collaborative is your practice?
I work a lot with other people when I’m painting murals. The scale of them just means it would take me forever to do them on my own and wouldn’t be a very efficient use of time. But most of my work – the ideas development, the research and the direction – is done on my own.

“I’m not much of a self-promoter. The large-scale nature of my work has helped in this respect, as it’s like a giant advert.” 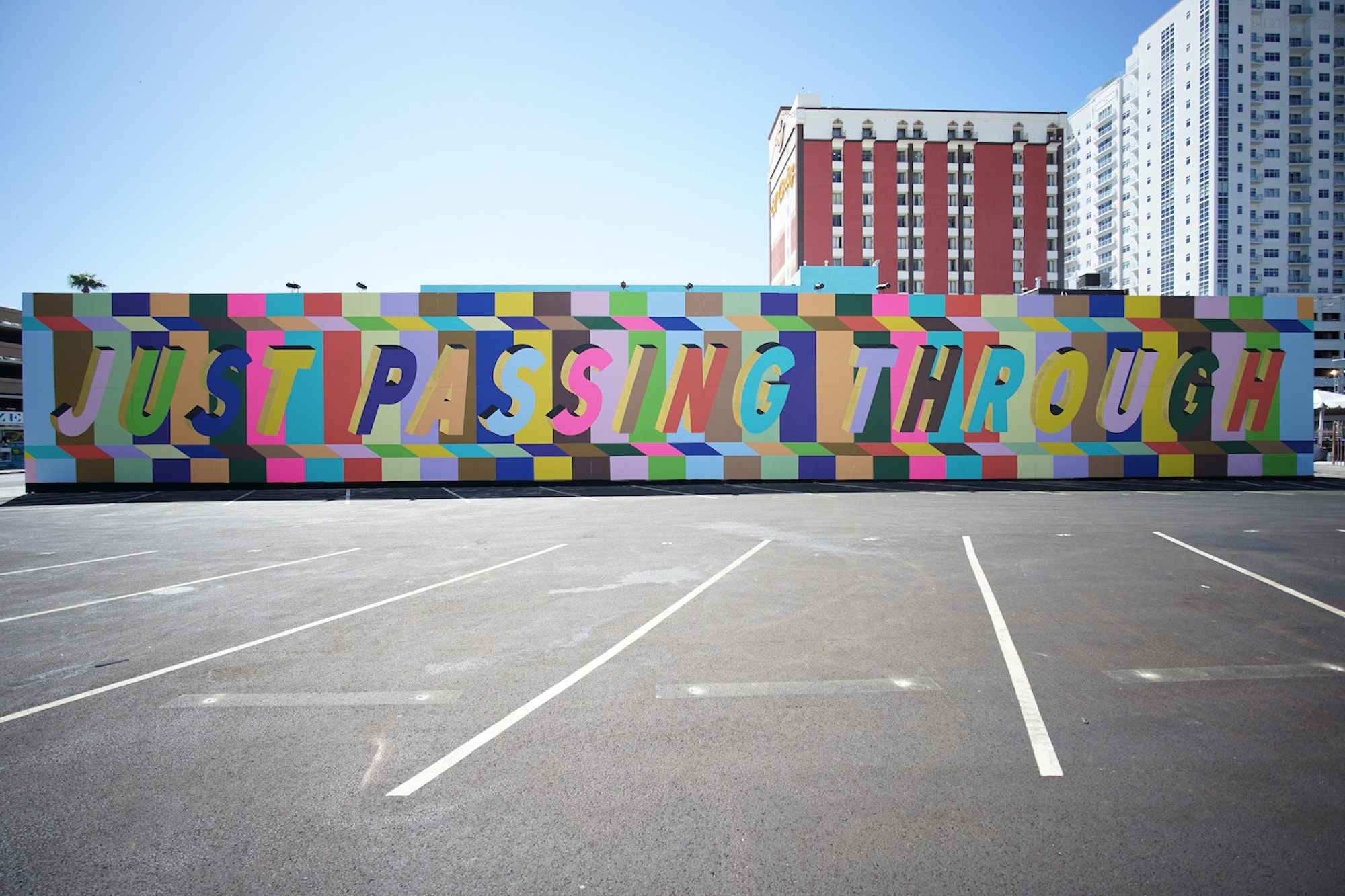 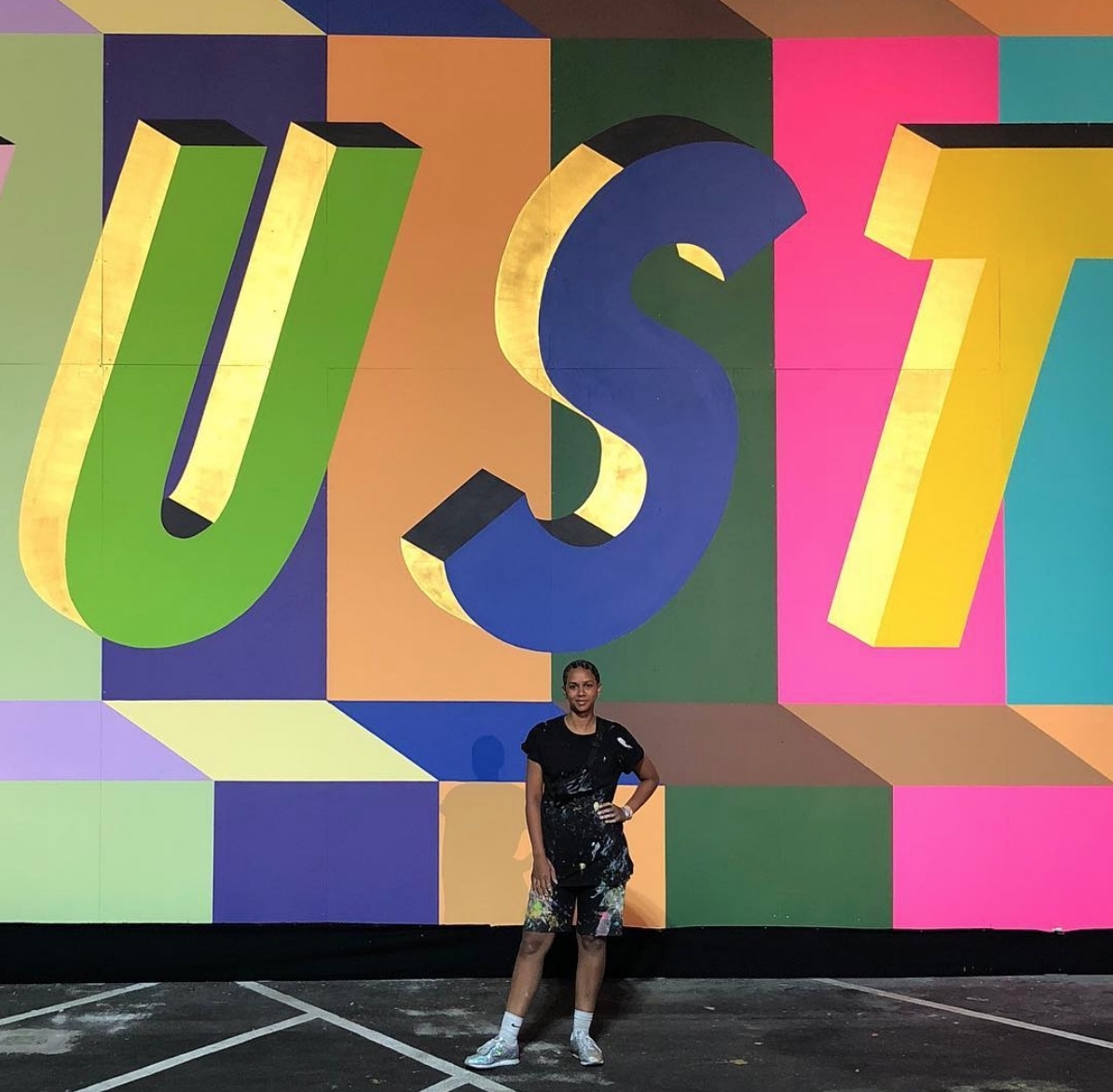 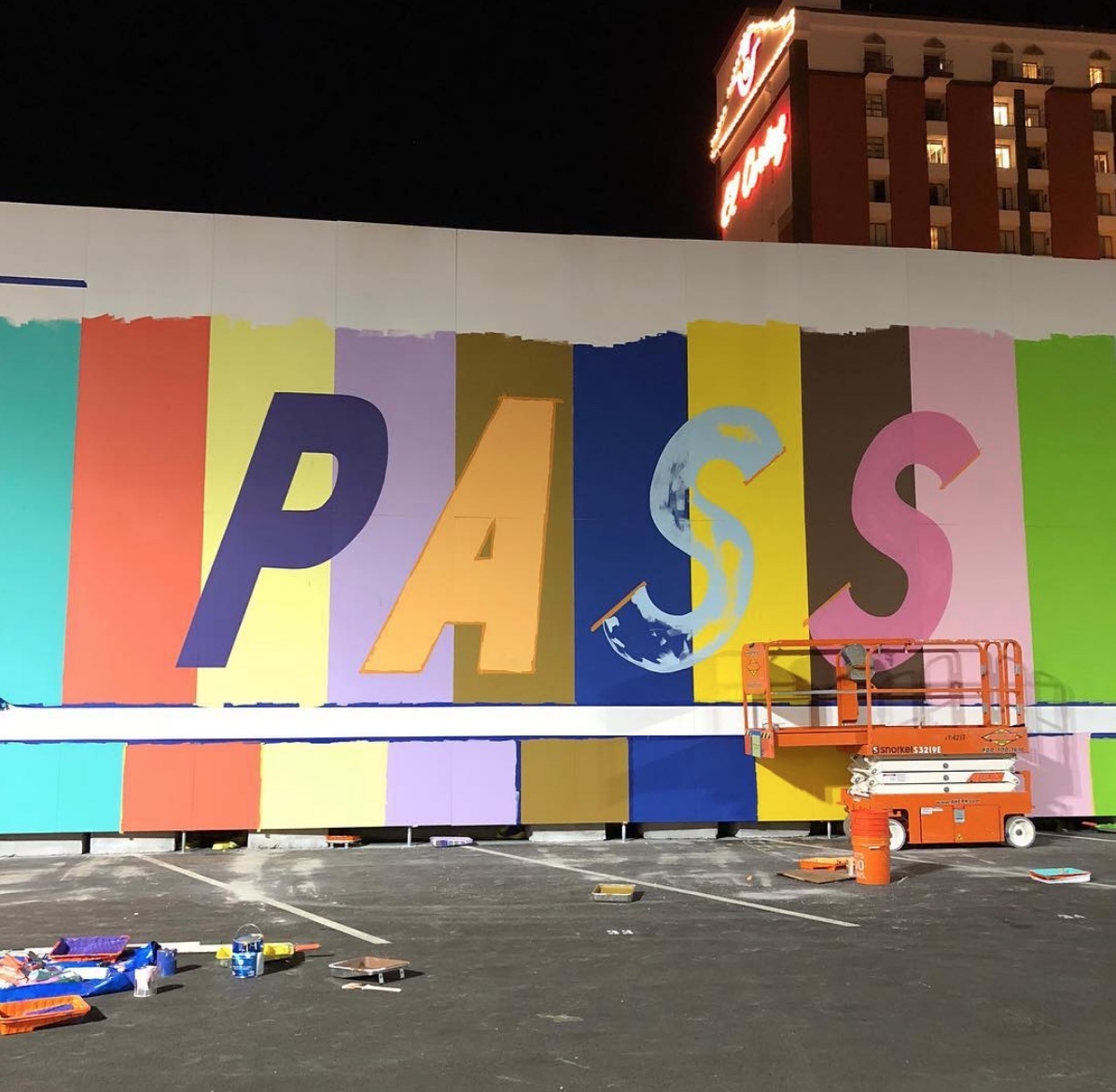 What has been the most exciting project you’ve been part of in the last twelve months?
An installation I did at the Humber Street Gallery in Hull, called This House Believes. I was allowed to do pretty much whatever I wanted, and that’s why it was so exciting. All my work is basically about speech. Public speech specifically is of real interest to me.

This piece was a response to increasingly polarised political opinion – the fact that there aren’t many contexts nowadays where two people with differing opinions can have a discussion and how, as a result, there’s a lot of self-censorship and often only one opinion being heard on a given subject.

I worked with fabricators to create this glorified soapbox consisting of two raised platforms for speakers to stand on. If only one person is speaking, the emptiness of the other platform highlights that this is just one person’s opinion, and only one position is being taken. There is one voice missing.

I enjoyed working on this because it had a conceptual element that I was able to push and integrate into the outcome of the work. So I was working on both a conceptual and an aesthetic level. 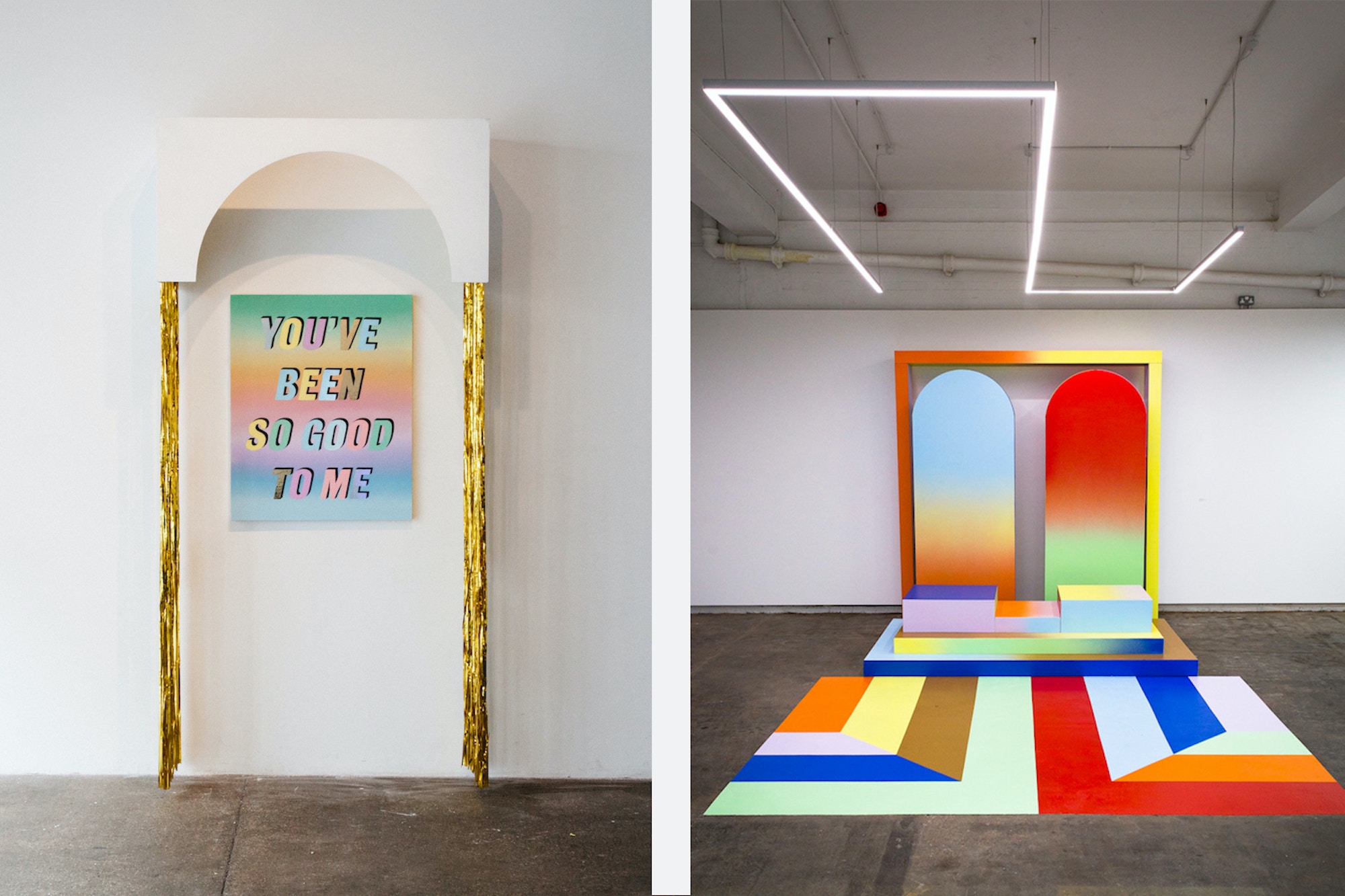 Do you ever find yourself overwhelmed by work, and if so, how do you manage stress?
Yes. I have to make sure I take regular breaks and get enough sleep. Since having a child in 2016, it’s changed quite a lot because my general working week consists of being in the studio for just three days, unless I’ve got a particularly big project or I’m travelling. It’s harder work now, as I don’t get a break. When I’m not in the studio I’m with my son, and that’s a kind of 24/7 job – but it’s less stressful I think.

It’s a headache and I have to wear a lot of different hats, but I think it’s forced my work to slow down, and I have to take on fewer big jobs, rather than more little jobs. Sometimes I resent not being able to do everything I’d like to with my work, but it’s made it less stressful somehow, as I have no choice. Or rather, I’ve made the choice to prioritise time with my son, so I stick to that. 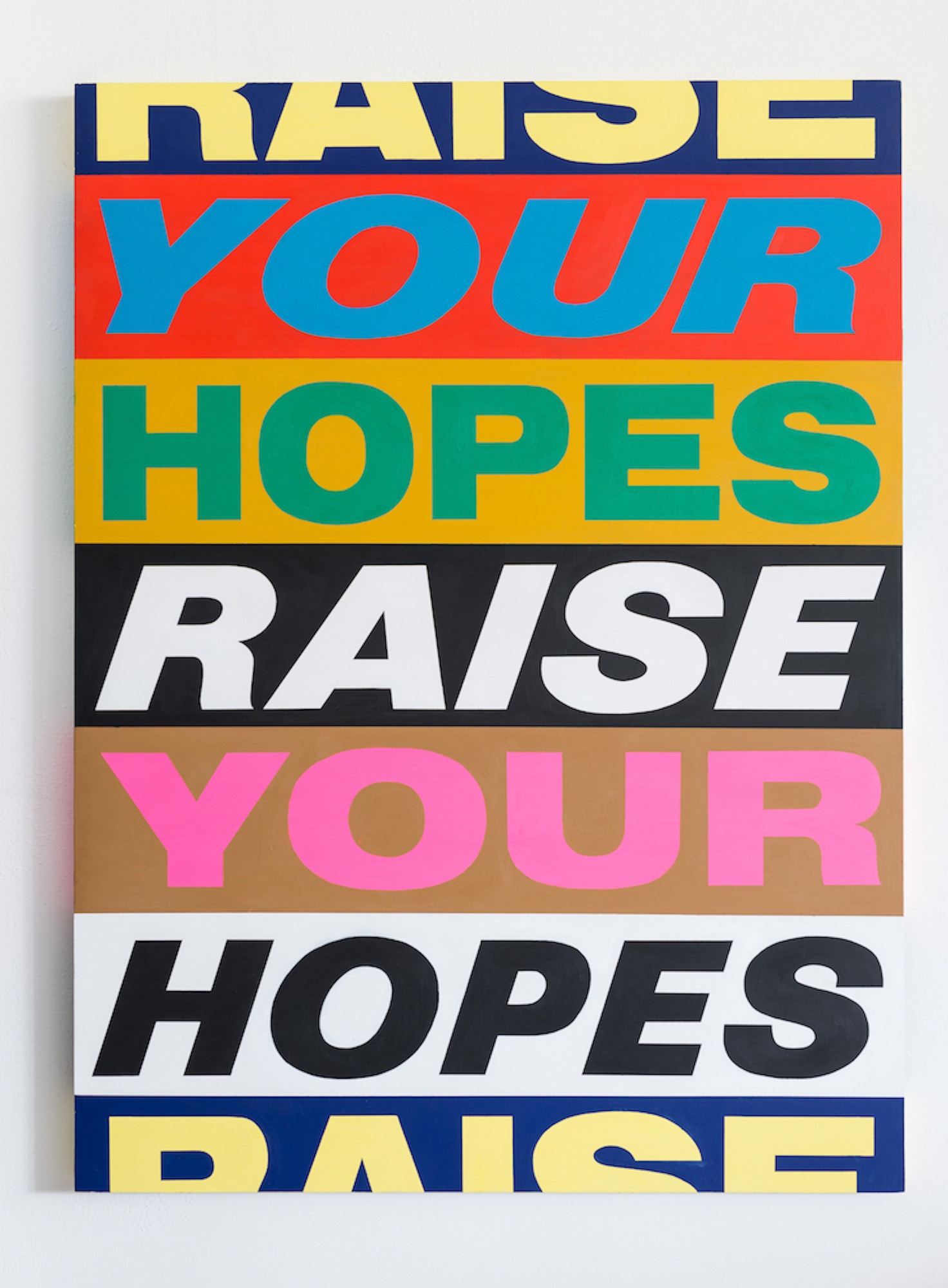 Do you feel gallery representation offers more opportunities as an artist?
That’s something I’m still working out. It’s not always as black and white as “I’m represented” or “I’m not”. I think it’s a lot more about relationships. There are some exciting relationships that I’m starting to build, for instance, with people who know people who can afford to spend a lot of money on art. I don’t know anyone personally who can, so it helps to get to know people like that.

How much energy do you put into self-promotion?
I’m not much of a self-promoter. The large-scale nature of my work has helped in this respect, as it’s like a giant advert for me in a way. Instagram is also helpful, although I have, at times, a tortured relationship with it. If I could, I’d leave it altogether as I find it overwhelming to be confronted with so many images, particularly the highlights of everyone else’s lives and careers – it’s distracting. So now I don’t follow anyone, I just put out what I’m doing as much as I can, which isn’t much. I’ve accepted my limitations. Particularly having a child now, I just can’t do everything. 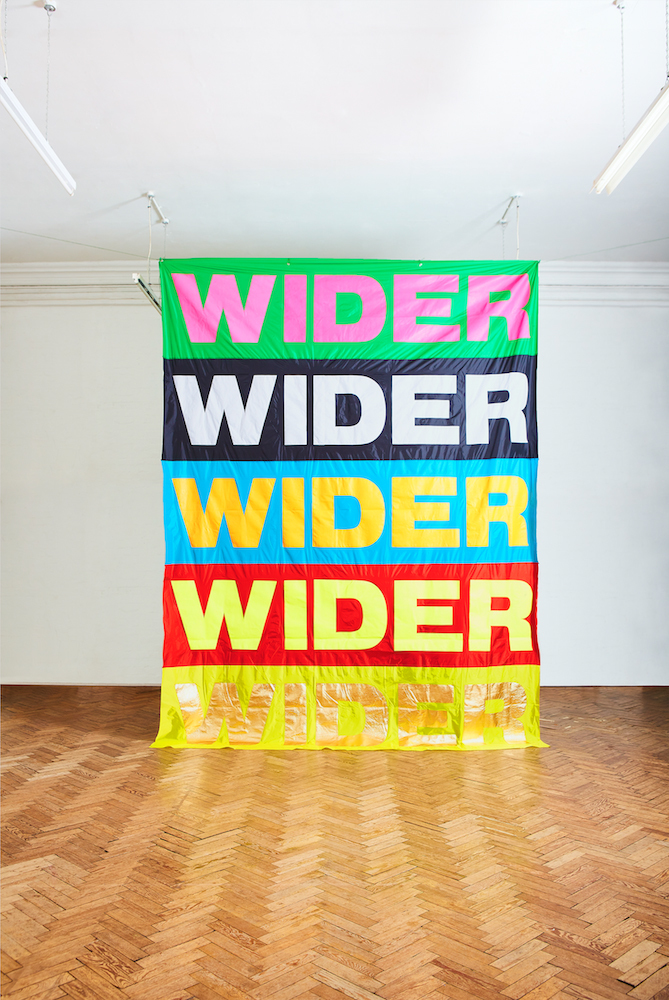 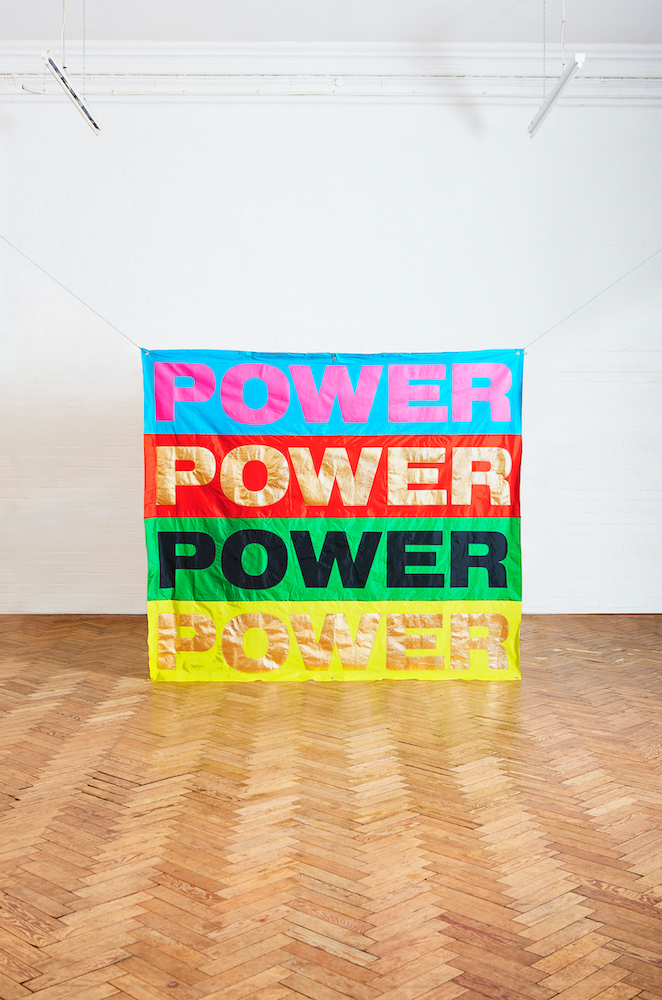 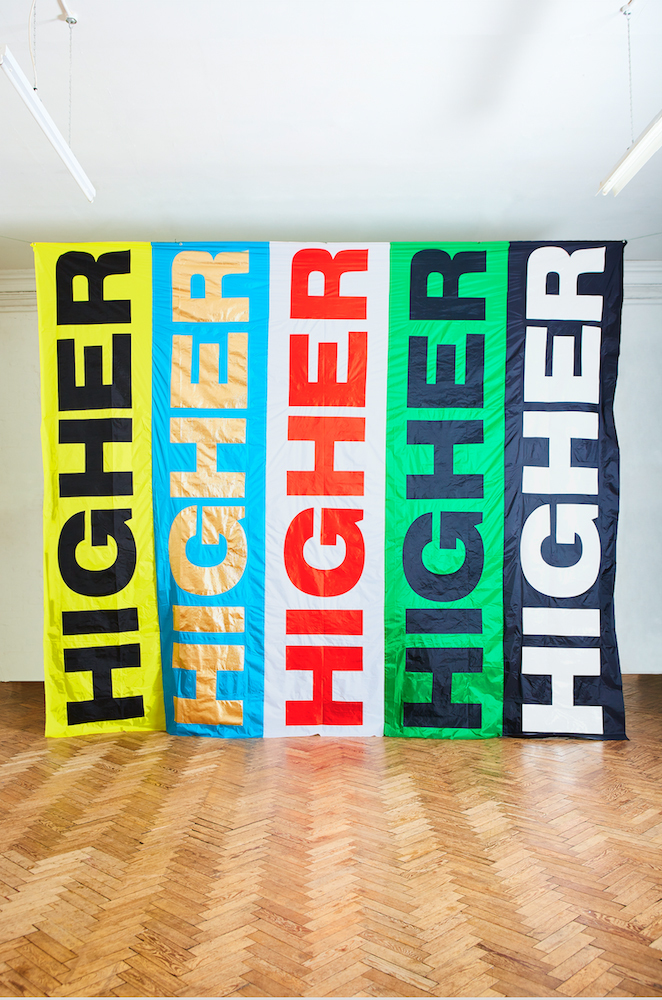 Do you take on additional work to support your creative endeavours? If so, how have you found this balance?
It’s a weird one; my own work and my commissioned work are quite blended. It’s something I have to keep reminding myself – that the commissioned work is actually not completely mine, although it may look like it from the outside. It’s compromised to some extent.

The commissions do support my own work and, to be honest, I get caught up doing more commissioned work than I’d like to, particularly if I’m saving up money for something. You have to take the big-money jobs when they’re offered. But I’m trying to make more space for my own work. It’s not easy, but I think it’s easier if you’re not desperate for money. Hence a lot of people who make art come from quite economically privileged backgrounds.

What tools do you use most for your work?
My MacBook pro. Adobe Illustrator. Pencils. Paintbrushes. Tape measures. Masking tape. Spirit level. Metre rulers. Paint. My iPhone. 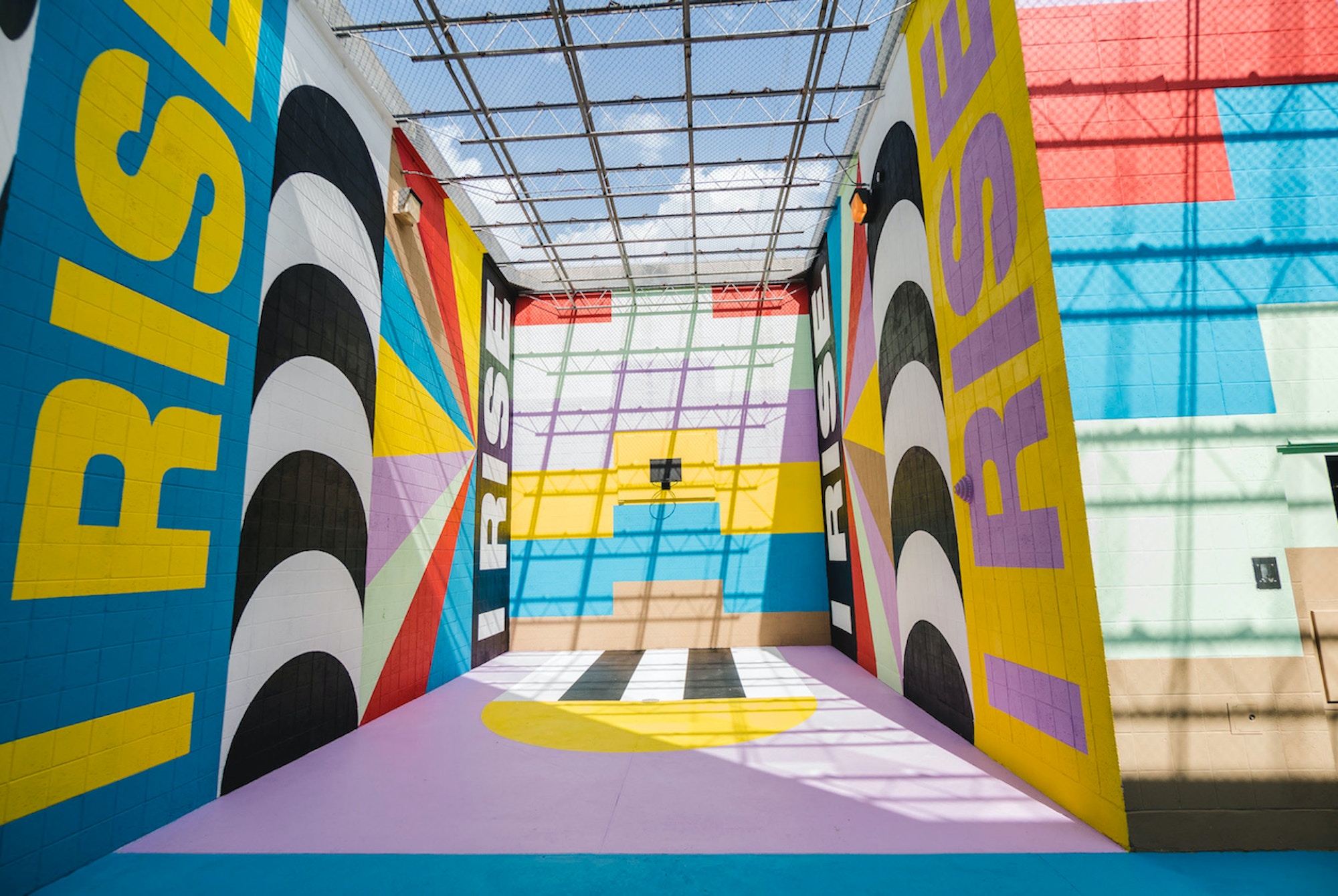 Growing up, what did you want to be?
A millionaire.

Do you feel that your upbringing has had much impact on your work?
Yes, in many ways. My dad was often unemployed, so money was always an issue. I think he was the one who made me want to be a millionaire. But then I realised that I could work as hard as I liked, and potentially still not get a job, so I thought I’d just do something I actually believed in, rather than chasing the cash.

Another point is that my work was kind of about survival. Growing up as a minority looking for a way to express and assert myself, but being quite shy, art arose as the way for me to do that.

“Growing up as a minority looking for a way to express and assert myself, but being quite shy, art [was] a way to do that. ”

Having studied graphics and illustration, was there a turning point when you decided it wasn’t what you wanted to do?
My commissioned work could qualify as illustration, though I don’t call it that. I just don’t like people telling me what to do. I find it really irritating creatively, particularly when it’s someone whose opinion I don’t respect.

Most of us have to compromise – most people have to get paid right? But I have things I want to say that no one is going to pay me to say, so I have to make my own work. 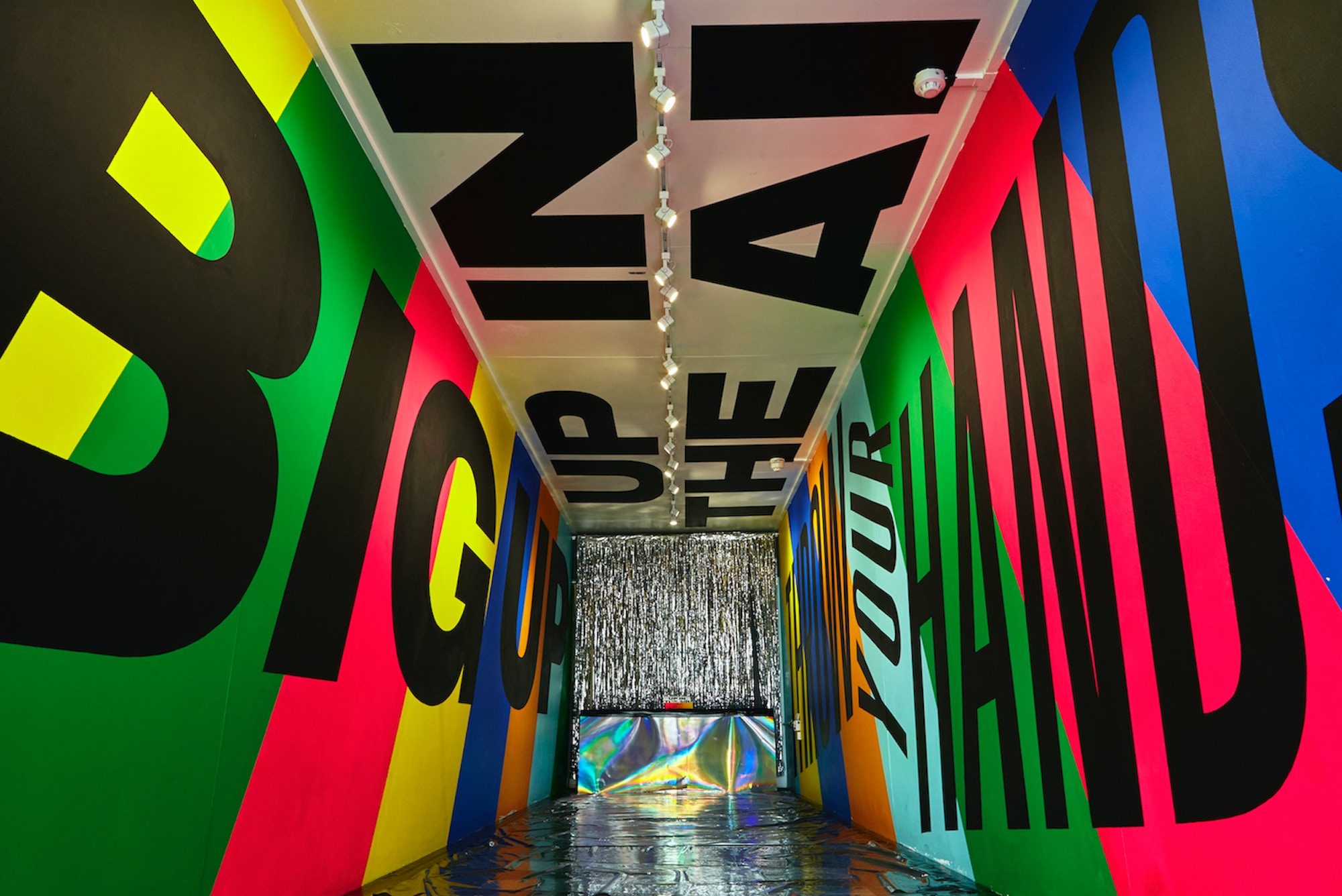 Was there a particular project or person that helped your artistic development?
A friend of a friend called Michelle Papillion. Her friend was curating the murals for a very influential festival in Miami in 2013, and it was through my participation that so many opportunities came about. It gave me exposure and a platform and the power to start calling the shots a bit more. I still have lots more growing to do, but that gave me an initial push.

Is your job what you thought it would be?
I don’t think I’d looked ahead or had a plan. I’d say that, like most things in life, it’s not as glamorous as I might have imagined. But it’s when I look back – at painting a huge wall in Las Vegas last year for instance – that I can’t believe this is what I do for a living. Getting to paint giant walls around the world with my sister. It’s a dream come true.

What would you say is your biggest ongoing challenge with your work?
The balance between commissions and my own work. Making space for my own work.

“I have things I want to say that no one is going to pay me to say, so I have to make my own work.” 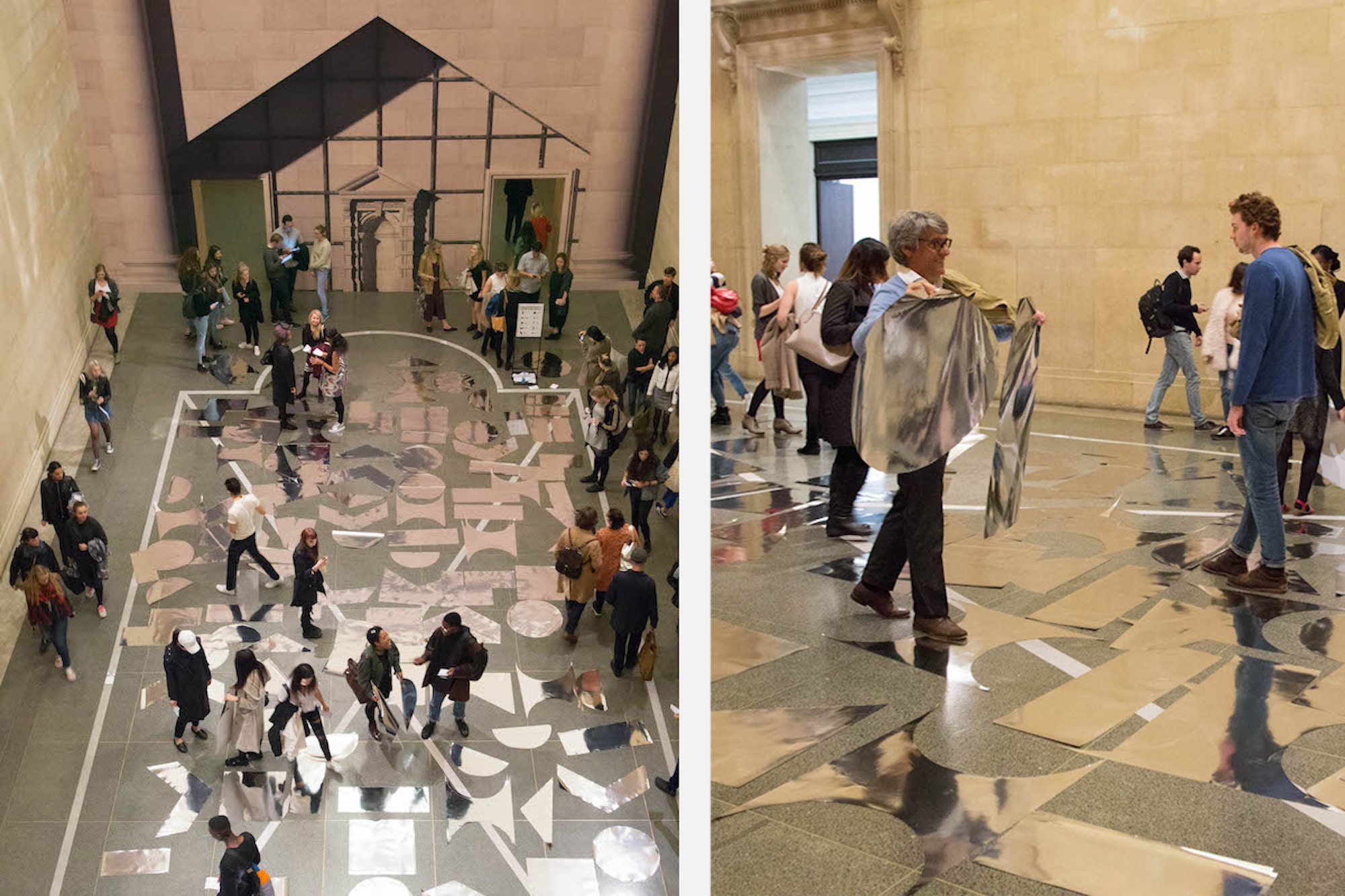 'This is my mantra', Tate Britain, London 2016 (photo by Diana Kolawole)

What projects have you got coming up in 2019?
I’ve got a dream project I’m working on at the moment (I won’t say what it is as I haven’t started yet). It’s not a dream in a way that would sound impressive to other people, like, “I’ve been commissioned to paint the outside of Buckingham Palace!” It’s quite humble, and I’m really excited about that.

“I’m trying increasingly not to get caught up with what other people think, or with what I ‘should’ be doing.” 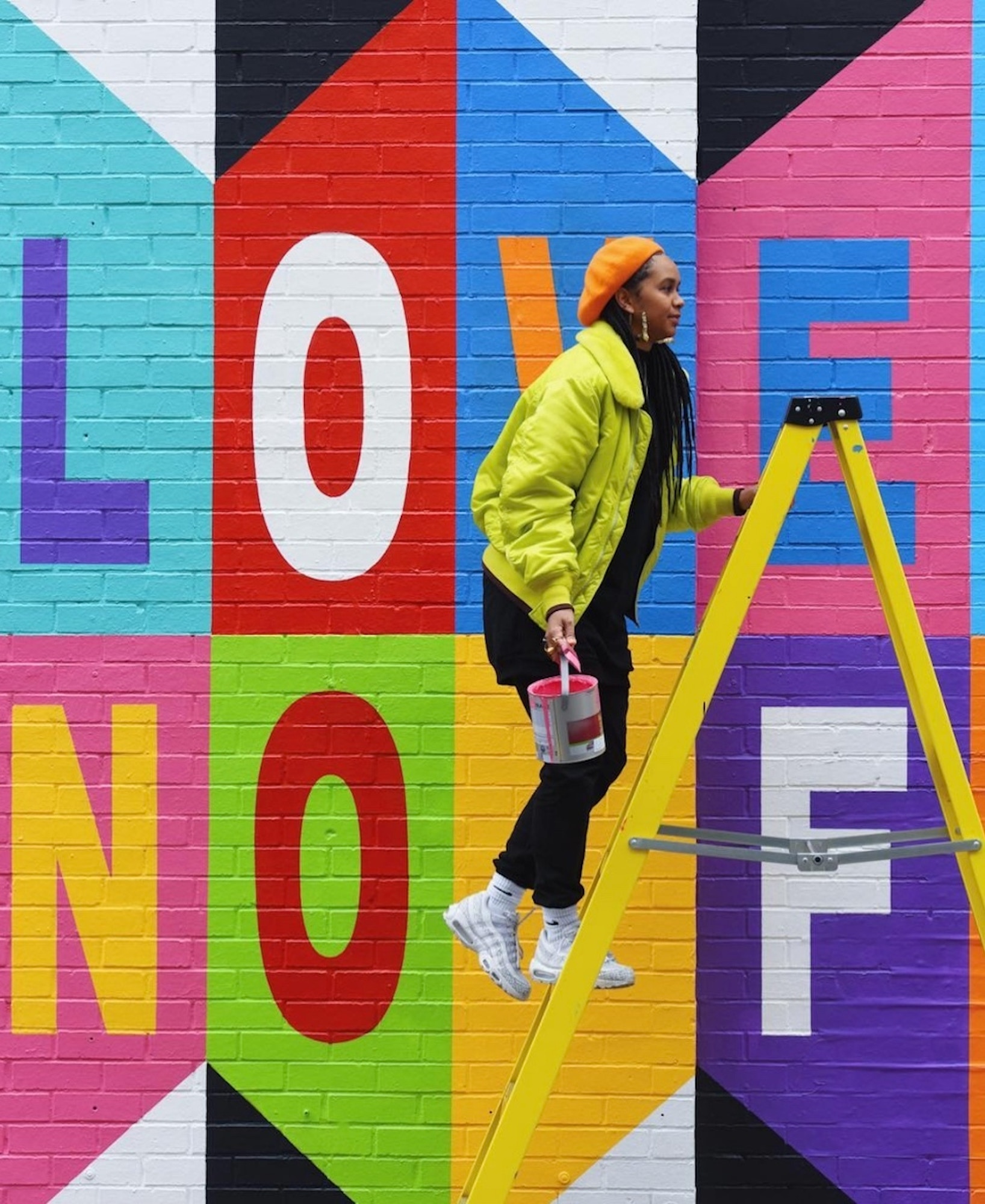 What advice would you give to a young creative wanting to develop a similar practice?
I often wish that when I was younger I’d done more internships to learn more about the creative industries. Because I didn’t have a mum or dad or older sibling or cousin doing anything related, I was clueless. I muddled my way through, but it would have been nice to have had more practical guidance. Internships are a good way of doing this, while you’ve got the time and the energy.

If you could recommend one resource to take inspiration from, what would it be?
One of my favourite books is all about the work of Emory Douglas – who worked as Minister of Culture for the Black Panthers. What a legend. It’s about him, but it’s also about the Black Panthers as a whole – a movement that was trying to influence culture, to shape culture, by any means necessary, from a beautiful poster to a black beret. I find that very exciting. This stuff actually meant something; the emphasis was on reshaping the mind of a people and a whole society. It wasn’t just about style, and it wasn’t popular. It was radical.

Jo Ham on building a brand, growing a business and the importance of perspective

Six steps to becoming your own boss: financial tips for freelancers