Designers Joana Filipe and James Mason got word that they had been chosen to design a Keith Haring exhibition at Tate Liverpool back in February. The first thing they did? “We cranked up the speakers with some 1980s hip-hop.” Immersing themselves in photos, films, documentaries about New York’s 80s creative scene, over a few months, the duo worked with Tate curators and fabricators to design an exhibit across 600 square metres that takes visitors inside the mind of the much-loved artist, his interest in underground club and street culture, and his vision that art should be made accessible to as many people as possible. Here, Joana offers a glimpse into the design and research process, and shares the four main factors to take into account when designing any exhibition.

(The exhibition was with the Tate curatorial team for around one year prior to us joining)
February to April 2019: Design development and Technical drawings.
May to June 2019: Fabrication Install.
June to November 2019: Exhibition run.

A mix of CAD Programs, Photoshop and Illustrator.

To design the Keith Haring exhibition for Tate Liverpool. Tate was looking for an exhibition designer who would bring a sensitive design and coherent feel across the exhibition reflecting the energy of 1980s New York City, and supporting the key messages of the exhibition. The brief was to oversee all aspects of the design and build.

This was the second time the studio had pitched for an exhibition at Tate Liverpool, so we had already met the curators on a site visit and during a previous presentation that we didn't win. This time, we were invited to pitch via email, which involved sending a proposal of our ideas, vision and how we would respond to the brief.

The brief was already defined and a clear steering had been provided in regards to what aspects of the story around Keith Haring that Tate wanted to highlight. There were key messages per section and the curators had made an initial section of works.

We had a bit of time to play with, so we sketched out our ideas instead of doing any complex renders. We drew exhibition views by hand and had a bit of fun imagining different scenarios and ways to approach the sections. Following this initial document, we were invited for a Skype interview, and were appointed straight after. 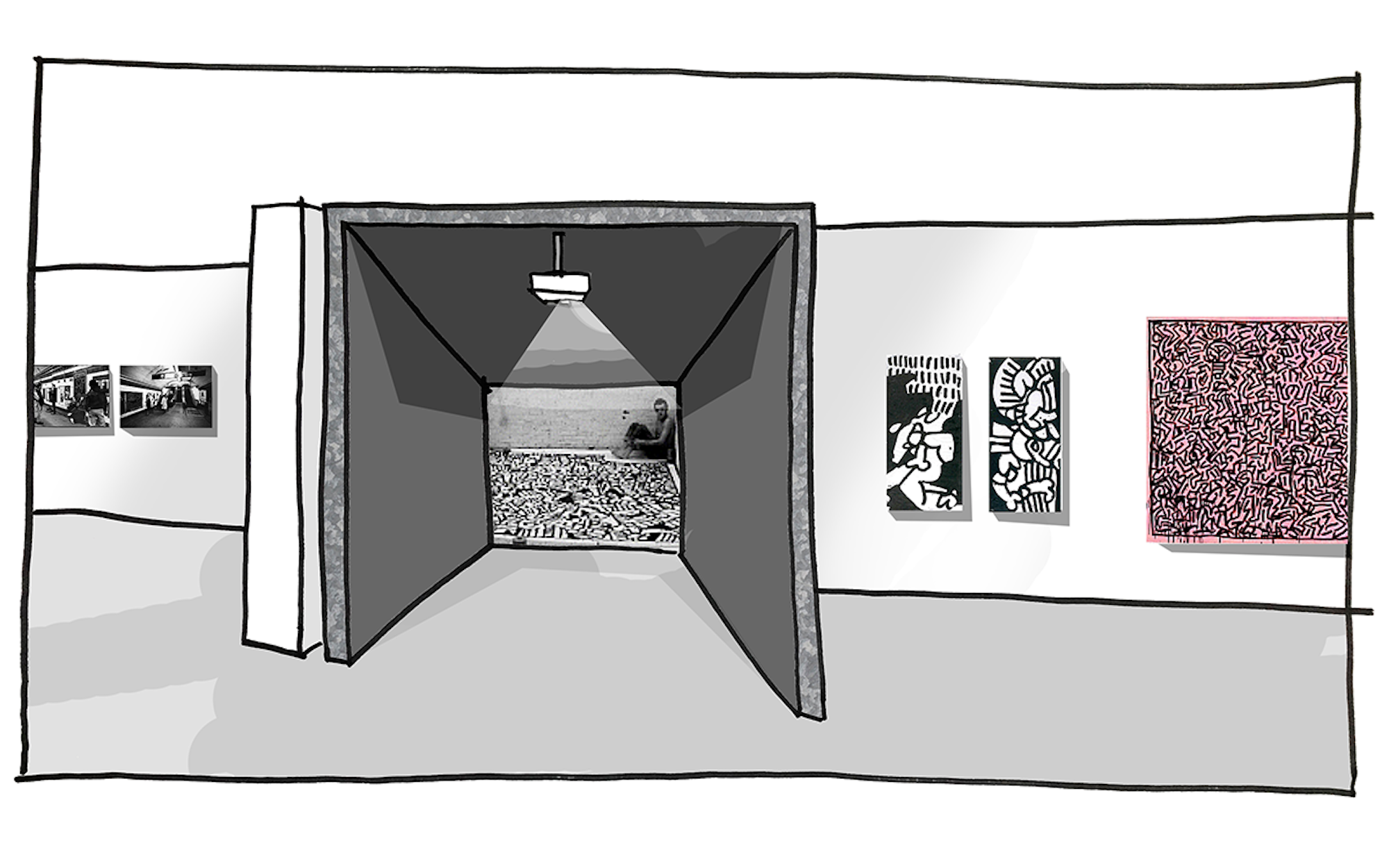 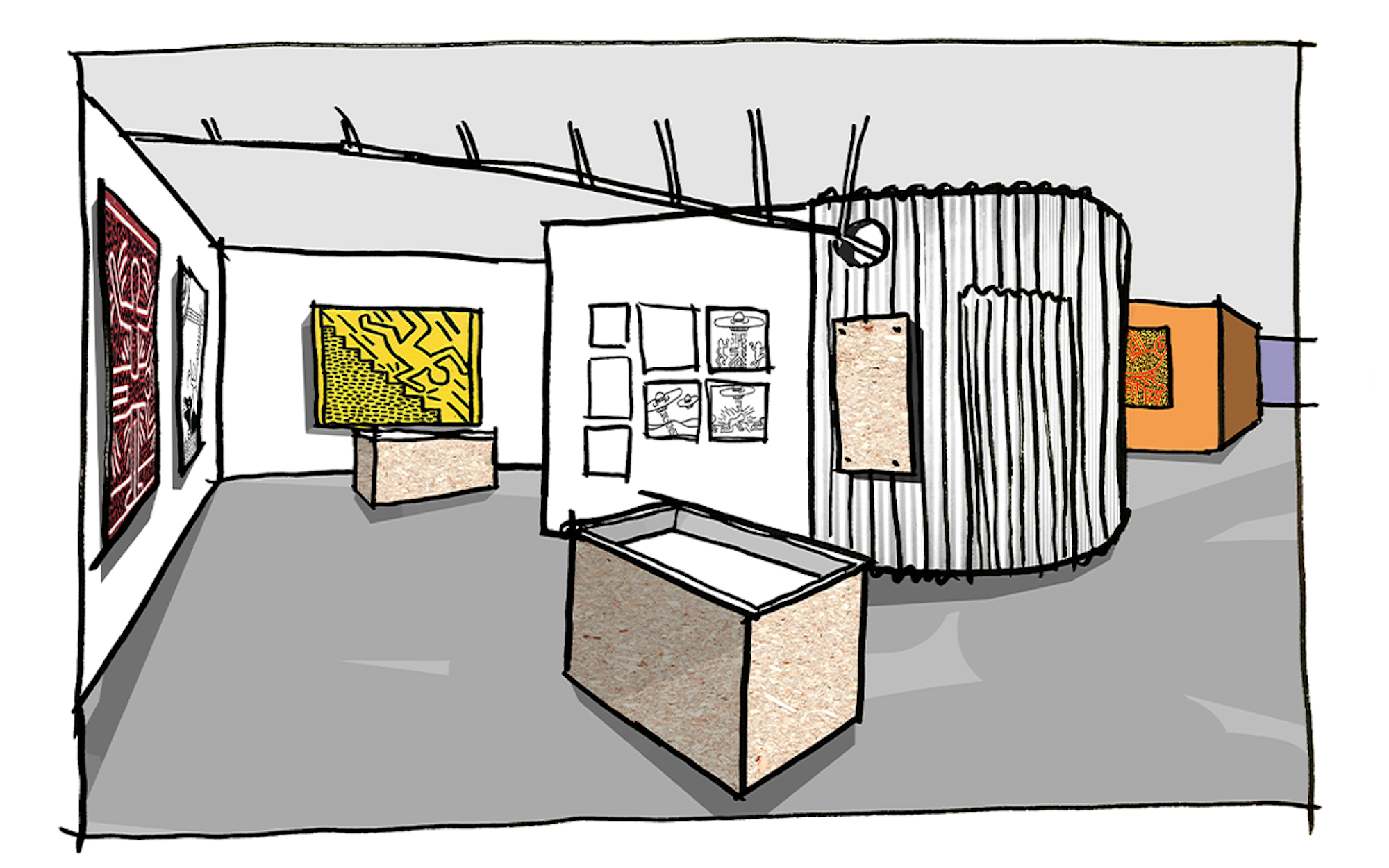 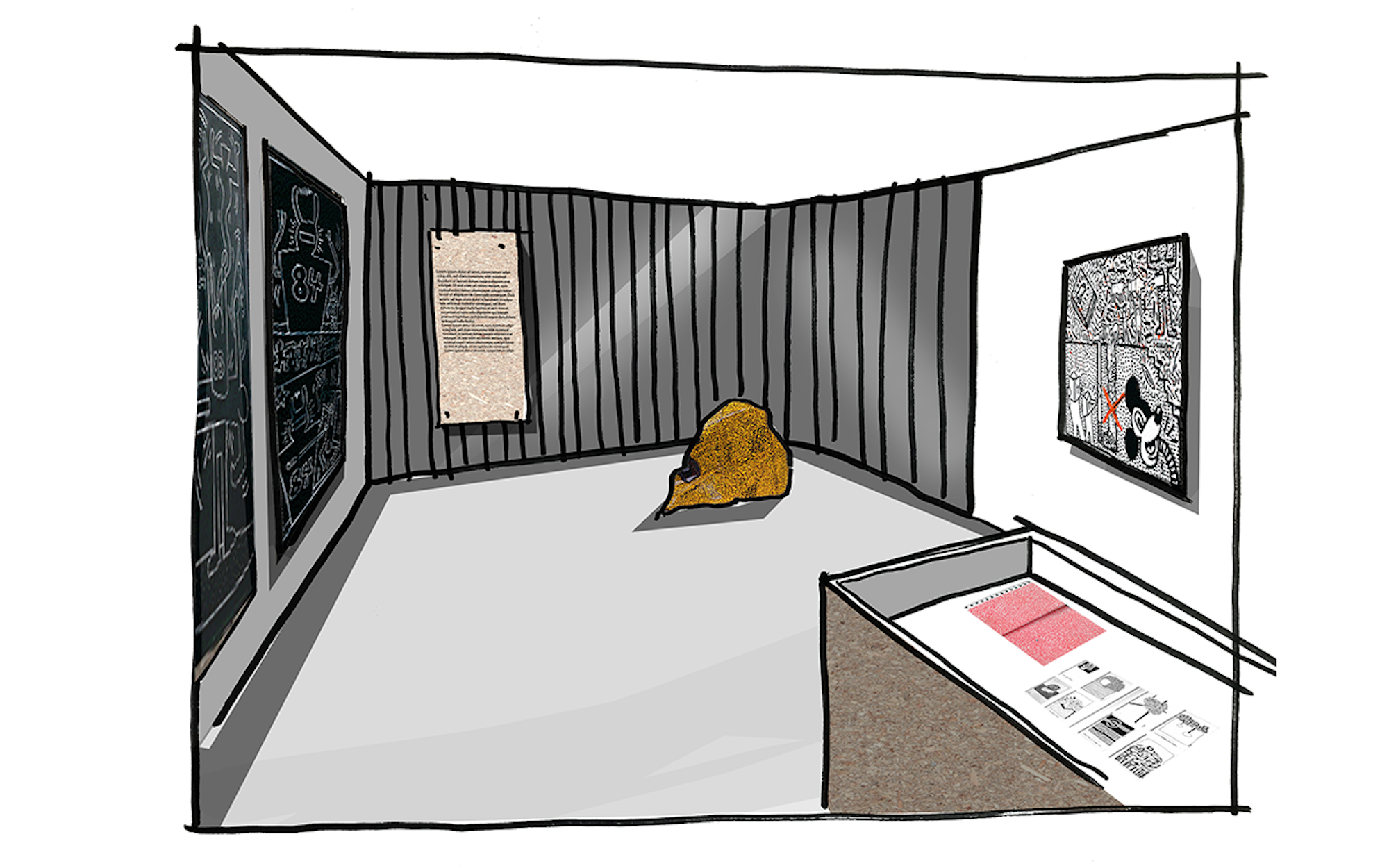 When designing exhibitions, we try to firstly immerse ourselves in the subject to understand the context of how the work was created. I (Joana) had studied Fine Arts in college, so I had some knowledge of Keith Haring’s work, but we were not so familiar with him as such a relevant political activist.

We did a lot of research by watching documentaries on 1980’s hiphop and the NYC creative scene, browsing photos by [photographer] Ricky Powell and [film director] Miron Zownir, and watching news clips of young Keith being arrested. We also looked at his peers like Jean-Michel Basquiat, his mentor Andy Warhol, and the similarities and differences between their approach to work.

“When designing exhibitions, we try to firstly immerse ourselves in the subject.”

We also made sure to not only research some recent retrospective exhibitions of Keith Haring’s work, but also how Keith Haring himself presented his own work. What really stood out in Haring’s drawings, collages, tarpaulins and murals was this relentless energy and disruptive attitude, and a desire to create art that was accessible to all. So that’s what we focused on. What we ended up with is a journey from the street to the gallery and back to the streets again.

The arresting art of Keith Haring

Considering all the Elements

There are many elements to consider when designing an exhibition but for us there are four main ones: Space, Story, Object and Audience. Depending on the project, some might have more weight than others. For example, if an object has a specific light requirement from a conservation point of view, you need to design the space with that in mind – for example, you might contrast a darker space with a lighter one to enhance a certain part of the narrative.

When it comes to story, you have to decide what precise story you are telling – and from whose perspective. Are you wanting to cause an emotional response? Or grasp complex events or ideas? Does the story tackle political sensitivities?

“When it comes to story, you have to decide what precise story you are telling – and from whose perspective.”

There is also a mix of practical considerations regarding the space – is it a white cube or traditional gallery? How do you create different atmospheres? Is it an external or internal exhibition? What is the duration of the show? These all define how you approach the design, but overall the challenge is to respond to these questions without losing sight of the overall message or experience.

The curation process of the show runs alongside the design process – while the curators decide which artworks are displayed in each section, the design team might propose a type of display that might inform the curators’ decision to exclude or include certain works. Technical drawings, sketches and the floorplan

Haring’s work is very iconic and bold, and we felt it was crucial to play along with this while also respecting the tone. It was important that the gallery didn’t feel like either a static museum or Haring’s famous [boutique] Pop Shop – it needed to incorporate the diversity of expression, performative drawings and Haring’s evolution from a young artist to a pop icon and then a political activist.

To ensure that visitors would experience these different nuances, the political spaces were designed to be open, while other areas were designed as more intimate experiences. For example, with Haring’s neon paintings we added a backdrop of neon-painted stripes as a reference to the nightclub aesthetics that he created at NYC’s Tony Shafrazi Gallery in the early 1980s. While for [video piece] Painting Myself into a Corner, we created a small viewing room and used the architecture of the space to reinforce the perspective of the work. 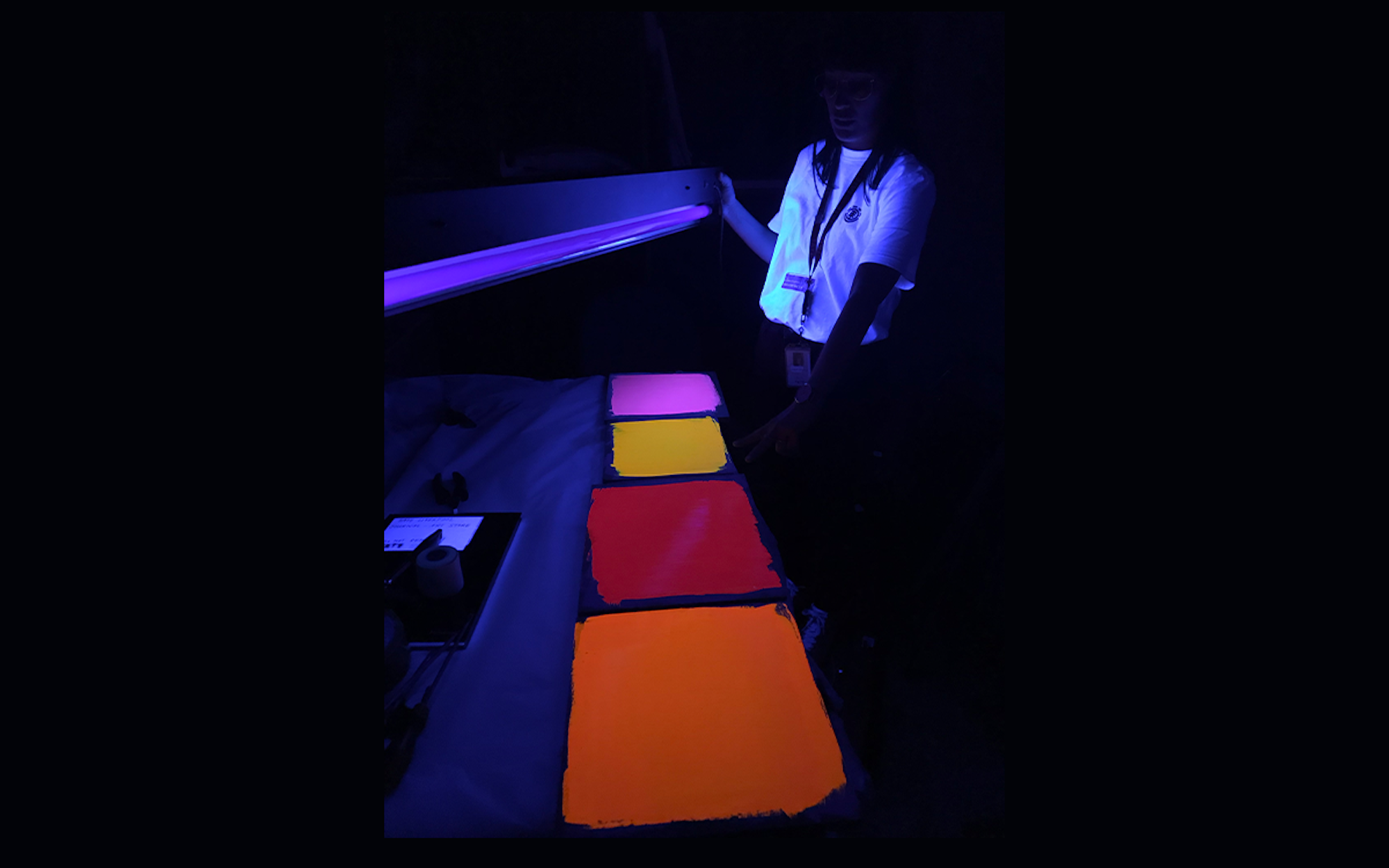 Tests for the neon room 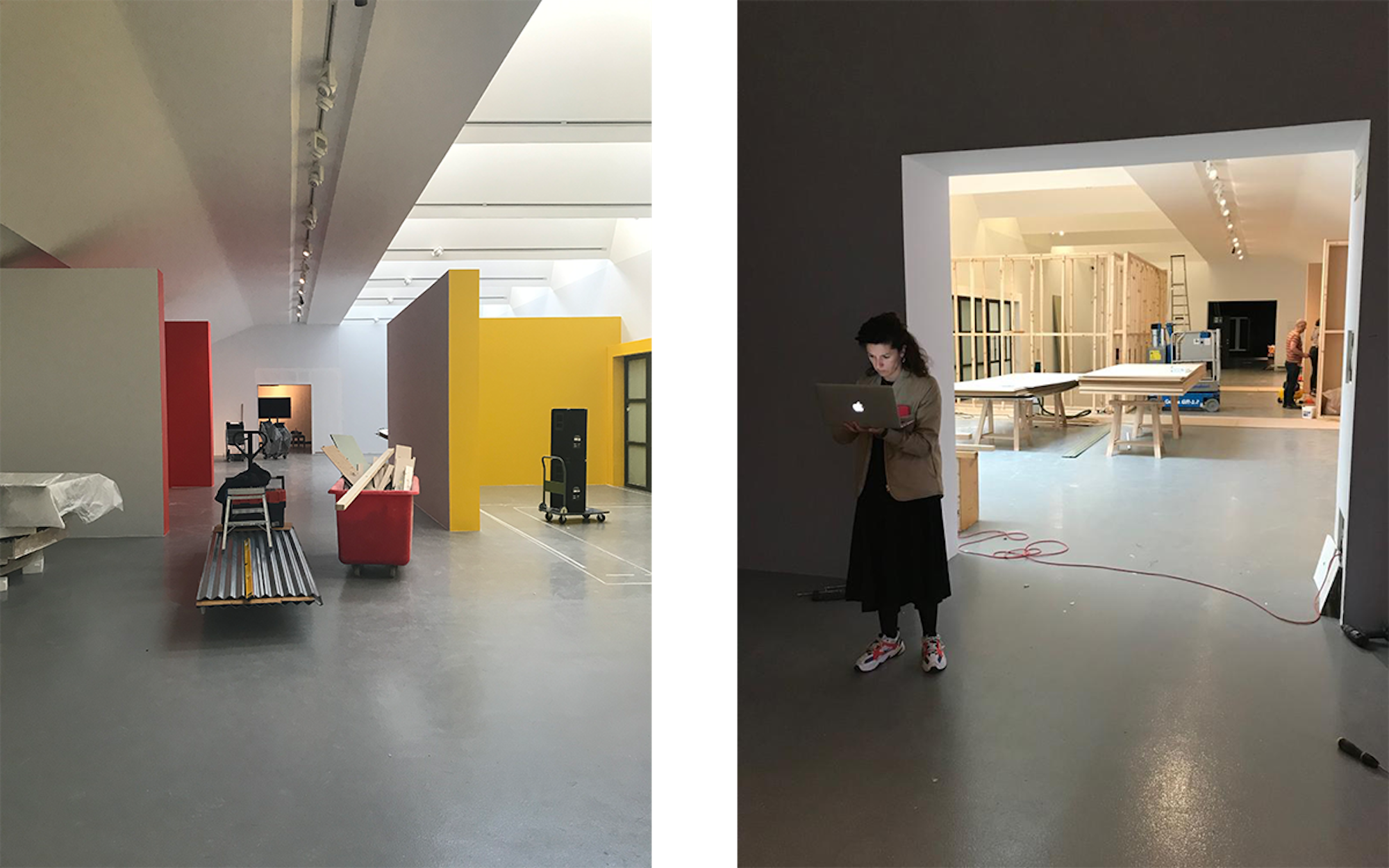 The exhibition is touring, so we are only contracted by Tate to design for this specific occasion, unless we’re incited to do the same by the different venues that host the exhibition in the future, (which we could love by the way – Hello Museum Folkwang!)

James Mason [designer from InterestingProjects], myself and the Tate curators were the main project people involved. The Keith Haring Foundation were the main loaner, and also involved in the creation of the project, so they also signed off our designs.

“It was a pleasure to hand over our drawings to technicians that have a real pride in their job.”

Once the technical drawings were completed and Tate initiated the build we were on site every two to three weeks to check progress. Prior to that we had Skype meetings probably once a month and several group calls to find to ensure the exhibition stayed within budget.

Tate Liverpool are an amazing institution that really made great use of its internal resources, they have a skilful in-house team of fabricators and art handlers that were incredibly professional throughout the whole process. It was a pleasure to hand over our drawings to technicians that have a real pride in their job. 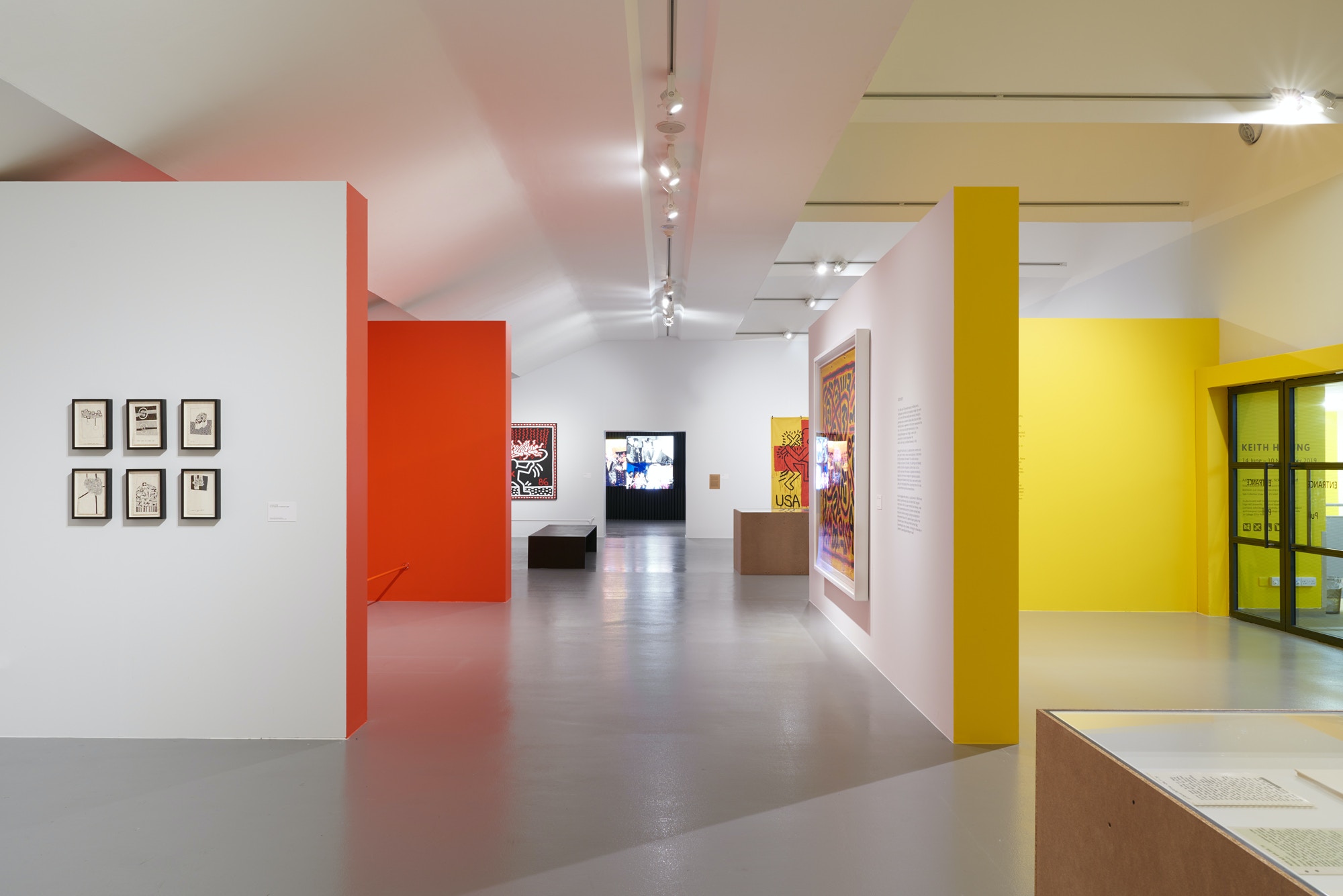 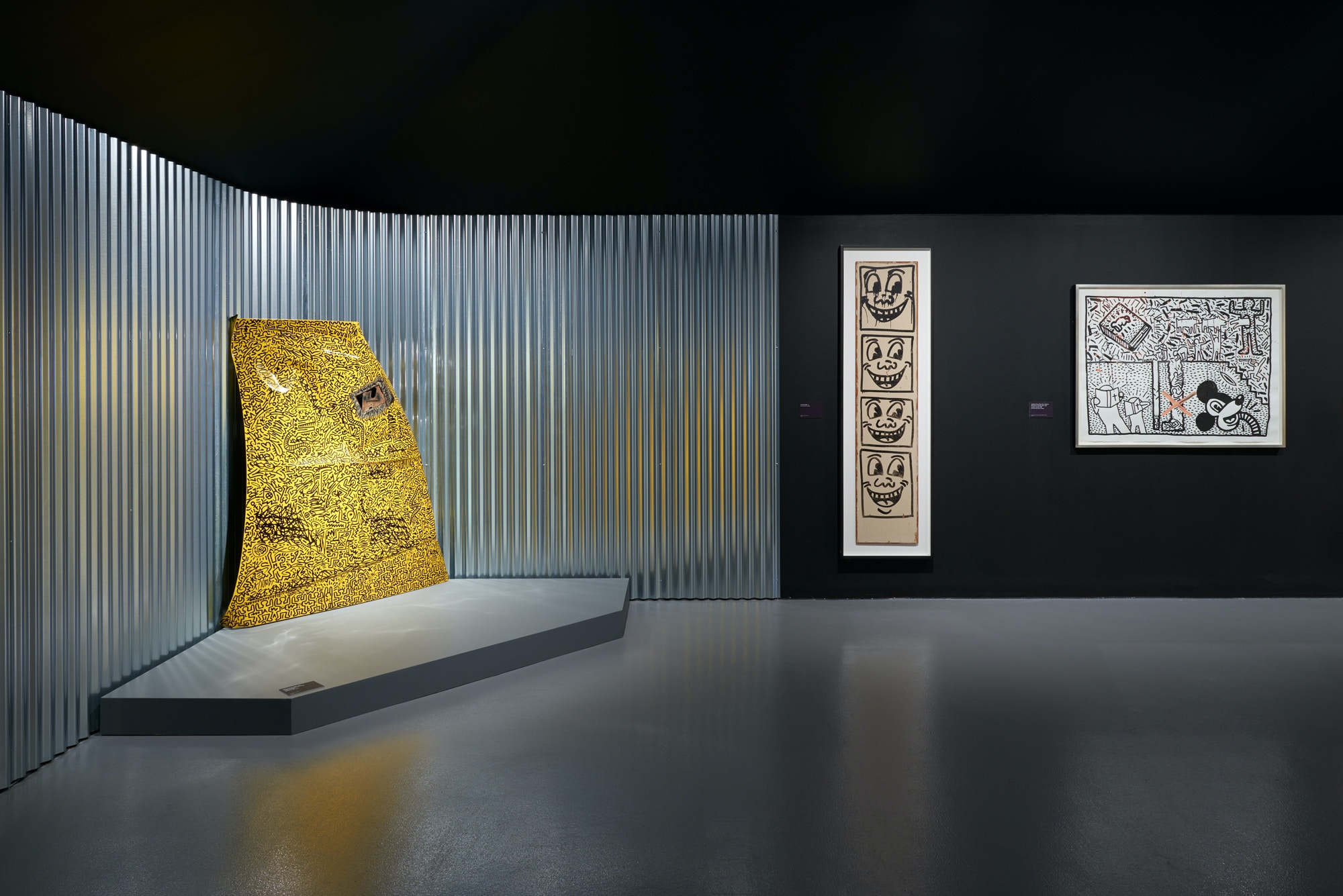 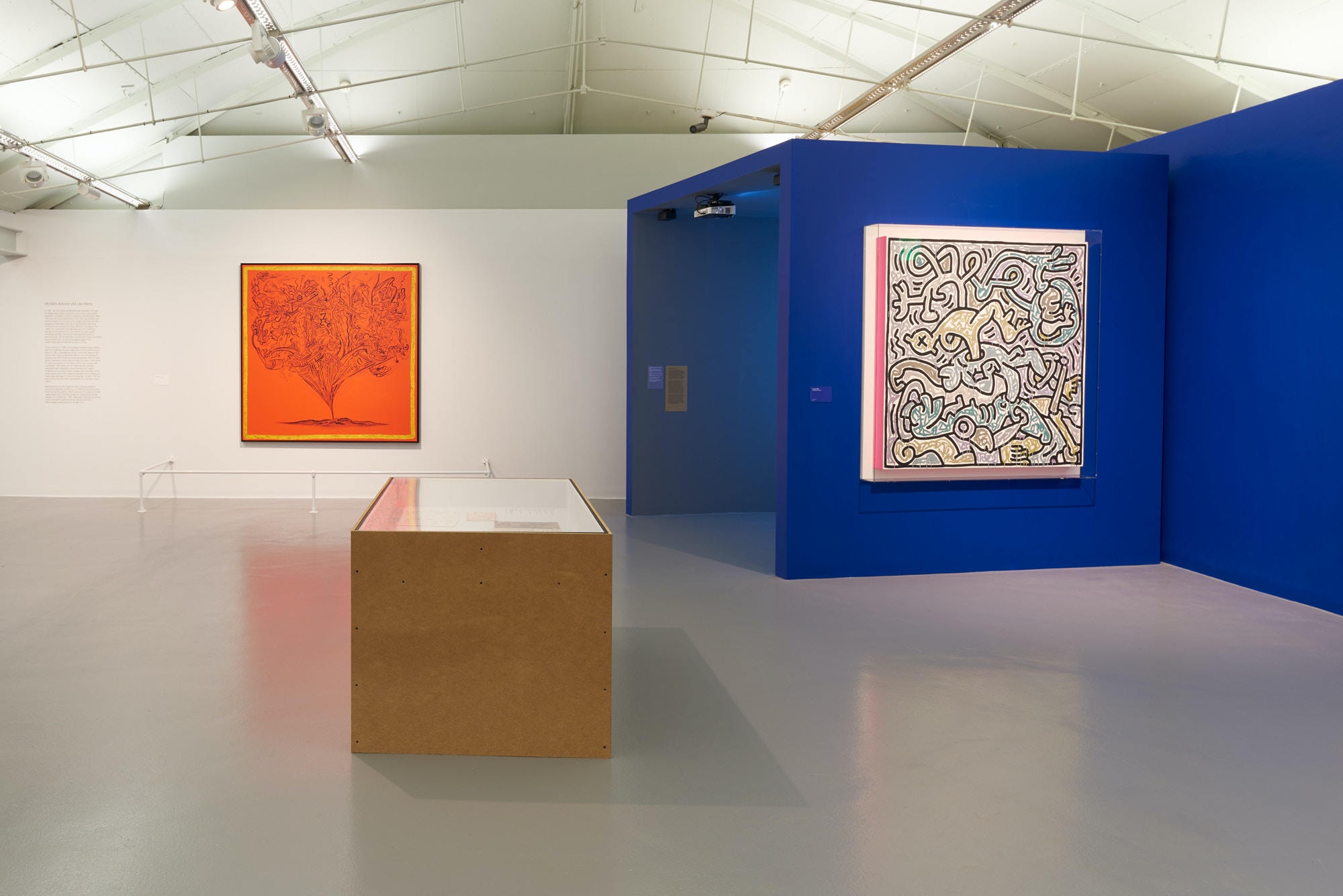 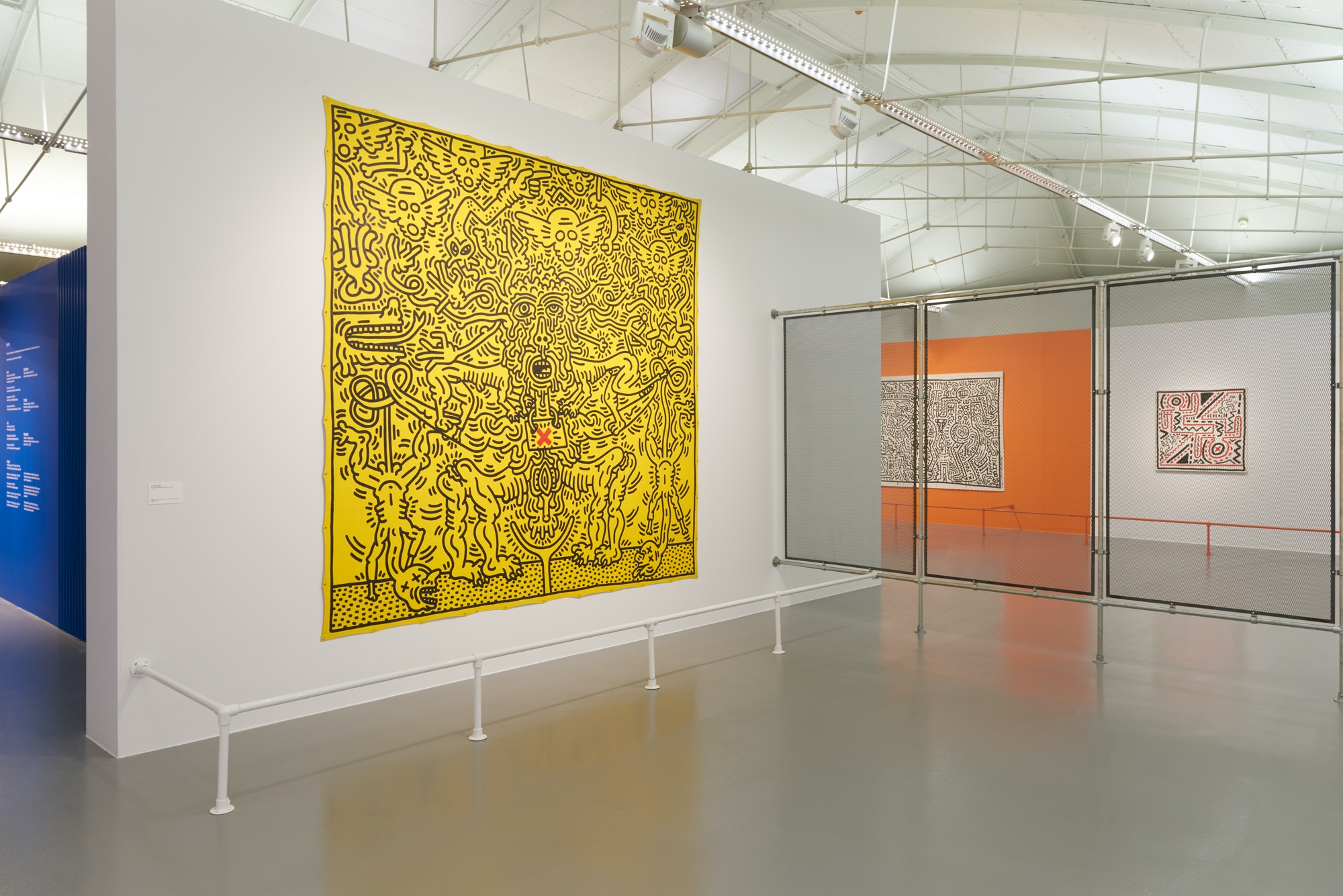 We ended up designing eight sections to accommodate around 85 works across 600 square metres. Looking back, the exhibition had limited financial resources which can be challenging at times, and some compromises had to be made. But when we arrived at the opening we were actually ecstatic and in awe of what Tate had actually achieved.

We don’t remember the last time a big museum had done a ‘open to all’ opening with music and DJs. Nothing could have been more in the Kieth Haring spirit of inclusivity, in Haring’s words “Art is nothing if you don’t reach every segment of the people.” We think Tate were really respectful of this ethos.

“The fact that people have started to invite us to pitch for other large institutions is possibly the best outcome.”

The curators were very pleased with the outcome. James and I knew we were pushing some limits of what Tate might have initially be comfortable with in terms of exhibition design, but there was a consensus that we had created an exhibition that changed not only how people see Haring’s work, but also re-enforced why his work is still relevant today.

The media was also overwhelmingly positive with The Guardian giving the show a four-star rating, and mentioning how “Keith Haring, at Tate Liverpool, is a true surprise: a show of unexpected jubilance and beauty.” The Telegraph also gave it a five-star rating.

Working on a project like this was a great achievement for both James and myself as we grow as designers and merge our businesses to focus more on exhibition design. This project has, without a doubt, been a trigger for change and a stamp of approval that we are on the right path in terms of our work. The fact that people have started to invite us to pitch for other large institutions is possibly the best outcome. 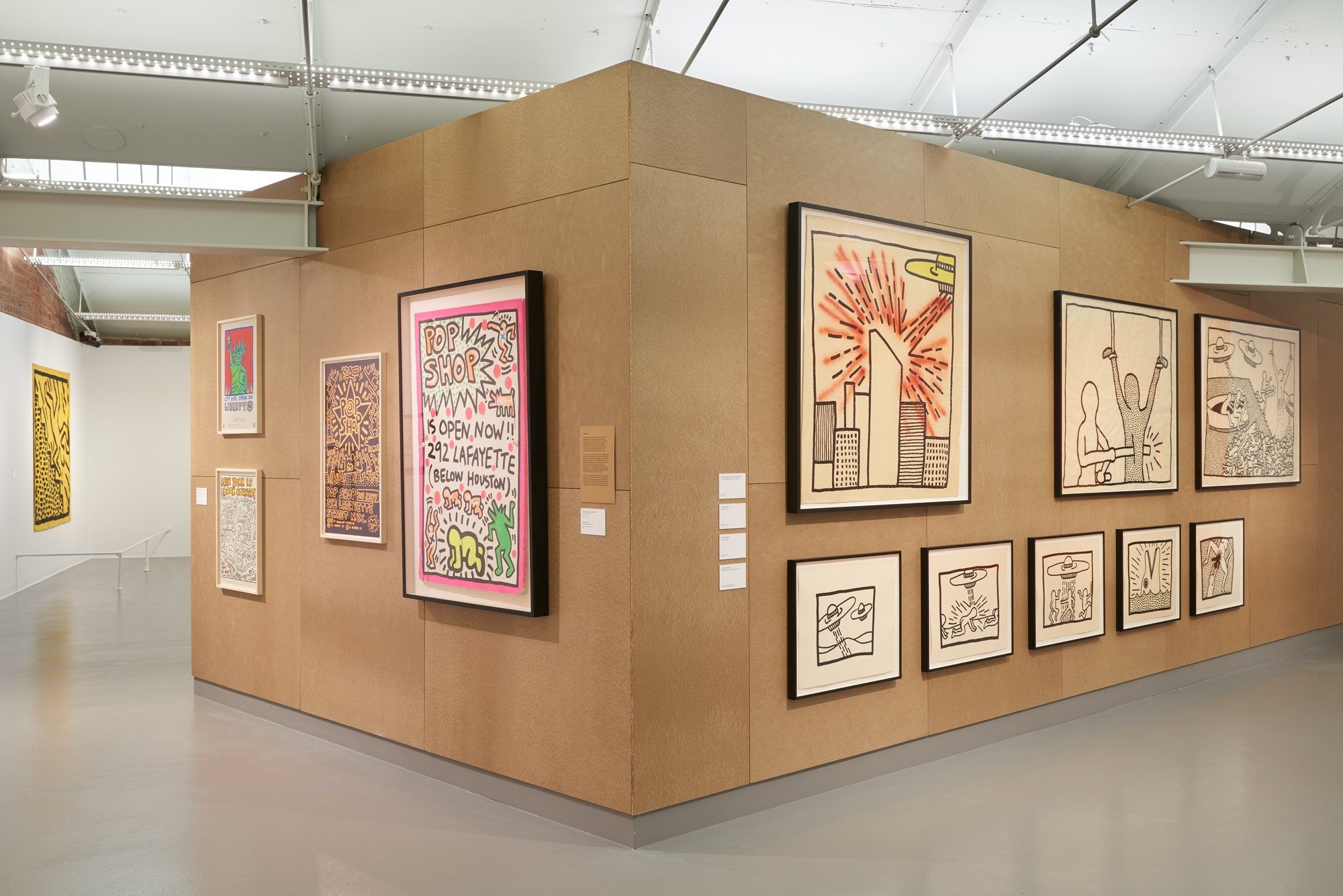