Based in London, digital designer Joe Mortell works for The New York Times. Originally from Cheltenham, Joe moved to London in 2009 to study graphic design at Central Saint Martins, before going on to specialise in 3D illustration. Today, as part of T Brand Studio, the newspaper's brand marketing team, Joe liaises regularly with the design team in the US on everything from articles, videos and animations. In addition to this, it’s clear that Joe finds real joy in experimenting and toying with new programs. In fact, making time to work on self-initiated projects has been instrumental to his development: “It helped me understand what I want to do more of in my everyday work” he shares. We catch up with him as he recounts some early stories while starting out, and reveals why he envies the life of a mathematician. 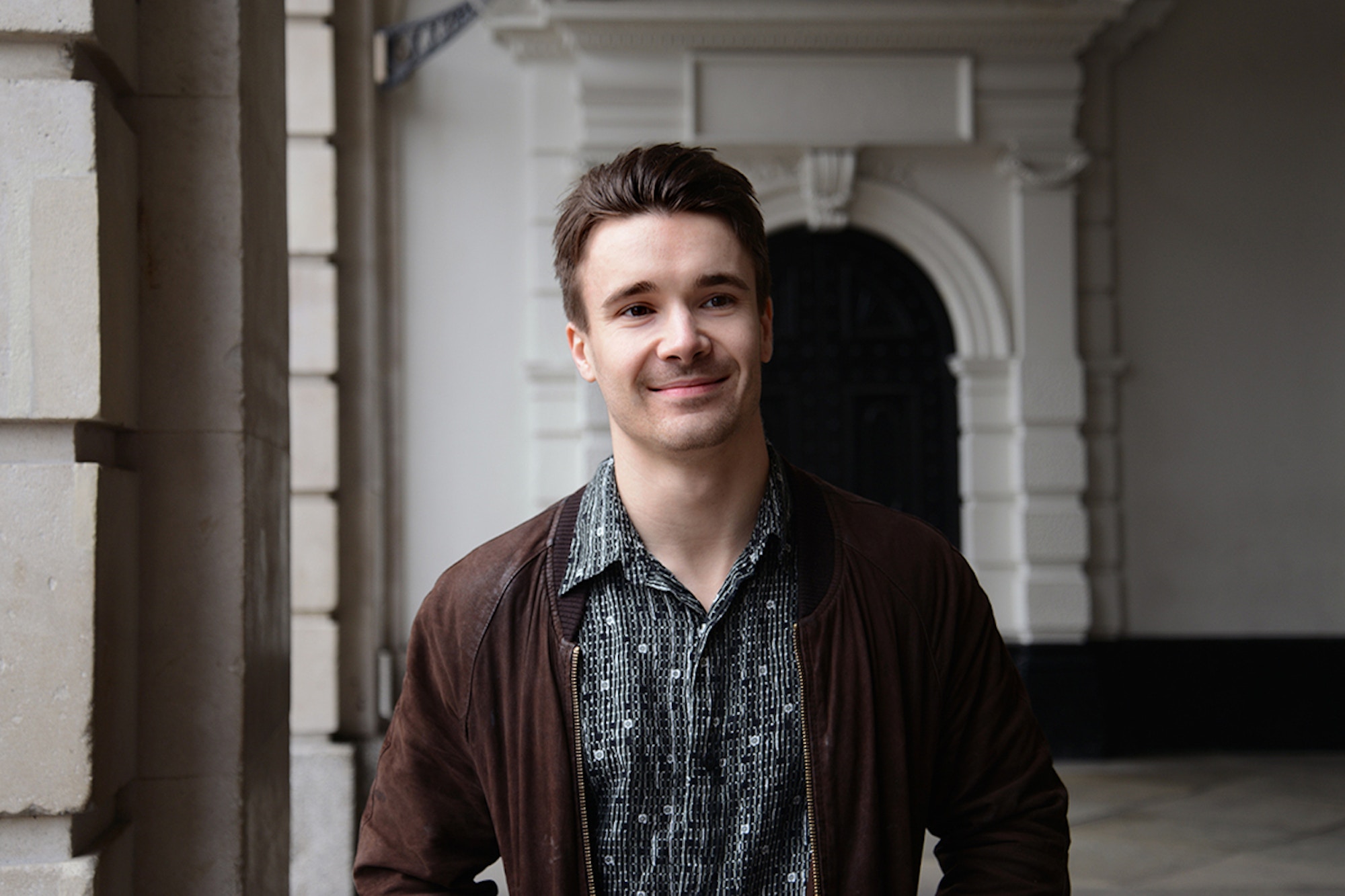 How would you describe your job?
I’m part of T Brand Studio, the brand marketing unit of The New York Times. As a team, we work on loads of different projects – reported articles, documentary videos, data visualisations and animations. My role in this varies from the visual design of our projects, animating and 3D work to working closely with hired talent such as illustrators and photographers.

What does a typical working day look like?
Each day is structured differently but it’s mostly split between me working at my desk on a project that is going live soon, or talking with the team about new ideas for upcoming work. It’s really nice to have that variety in what I do each day. One day could be selecting and laying out photography with an article and the next could be animating illustrations.

“We talk regularly with the US design team and share advice and learnings with each other.”

What do you like about working in London? What are some of the challenges of working for a US-based company?
I originally came to London from the countryside town of Cheltenham to study for three years. But almost 10 years later, I’m still living here because it’s a lot easier to find a design job in an area you’re really interested in. Plus, I don’t have to wait an hour for a bus! Although I do miss the politeness of the countryside and not being able to thank the bus driver without being looked at like a psychopath.

On working for a US-based company, I think it only really has benefits for a team. If you’re working on a tight deadline you can work on the project, pass it on to US designer, and do a tag team type of thing with it. This was true at my last agency where the team was a lot smaller, but at the NY Times we have our own international team so we make the most of talking regularly with the US design team and sharing advice and learnings with each other. 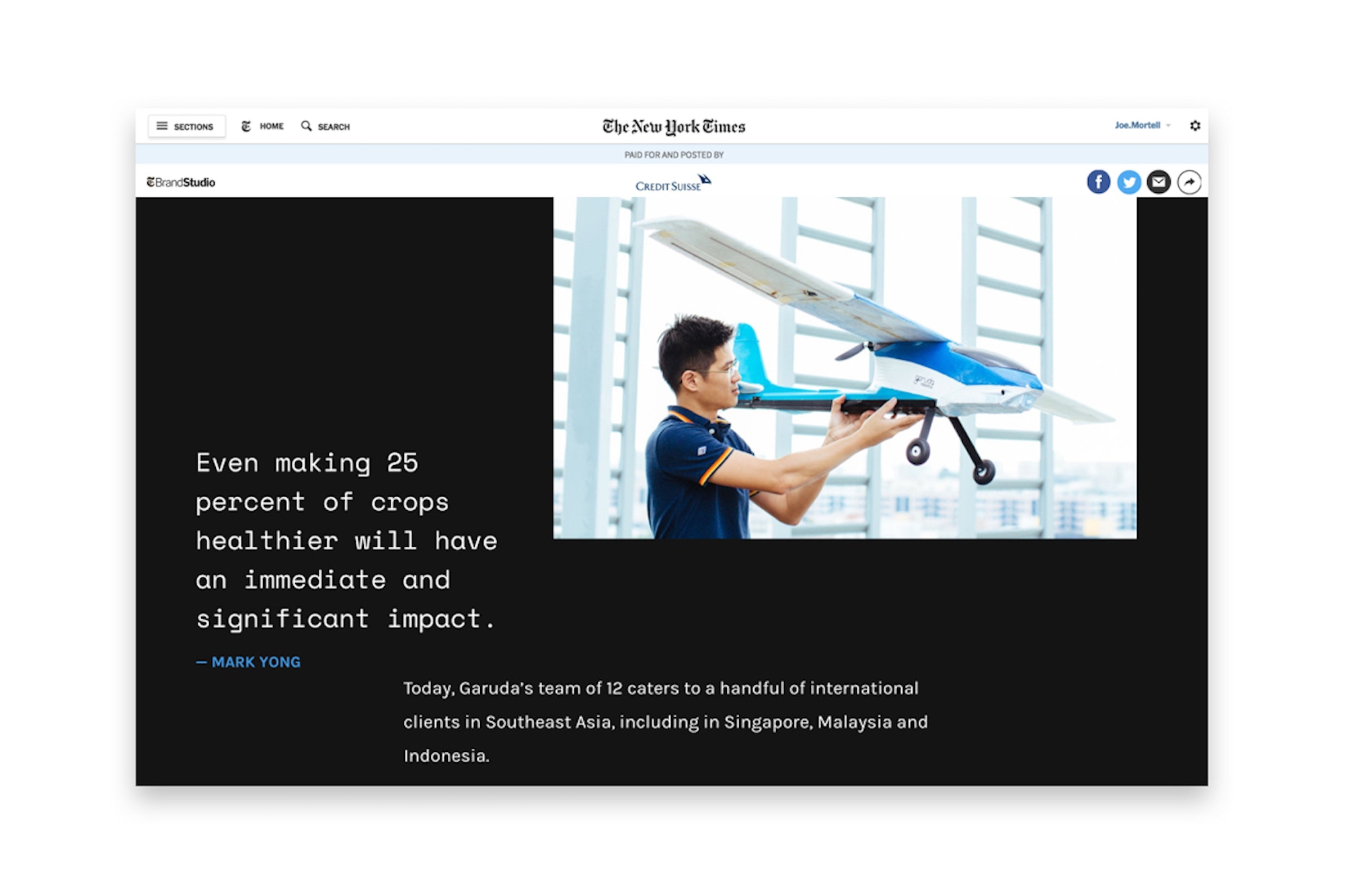 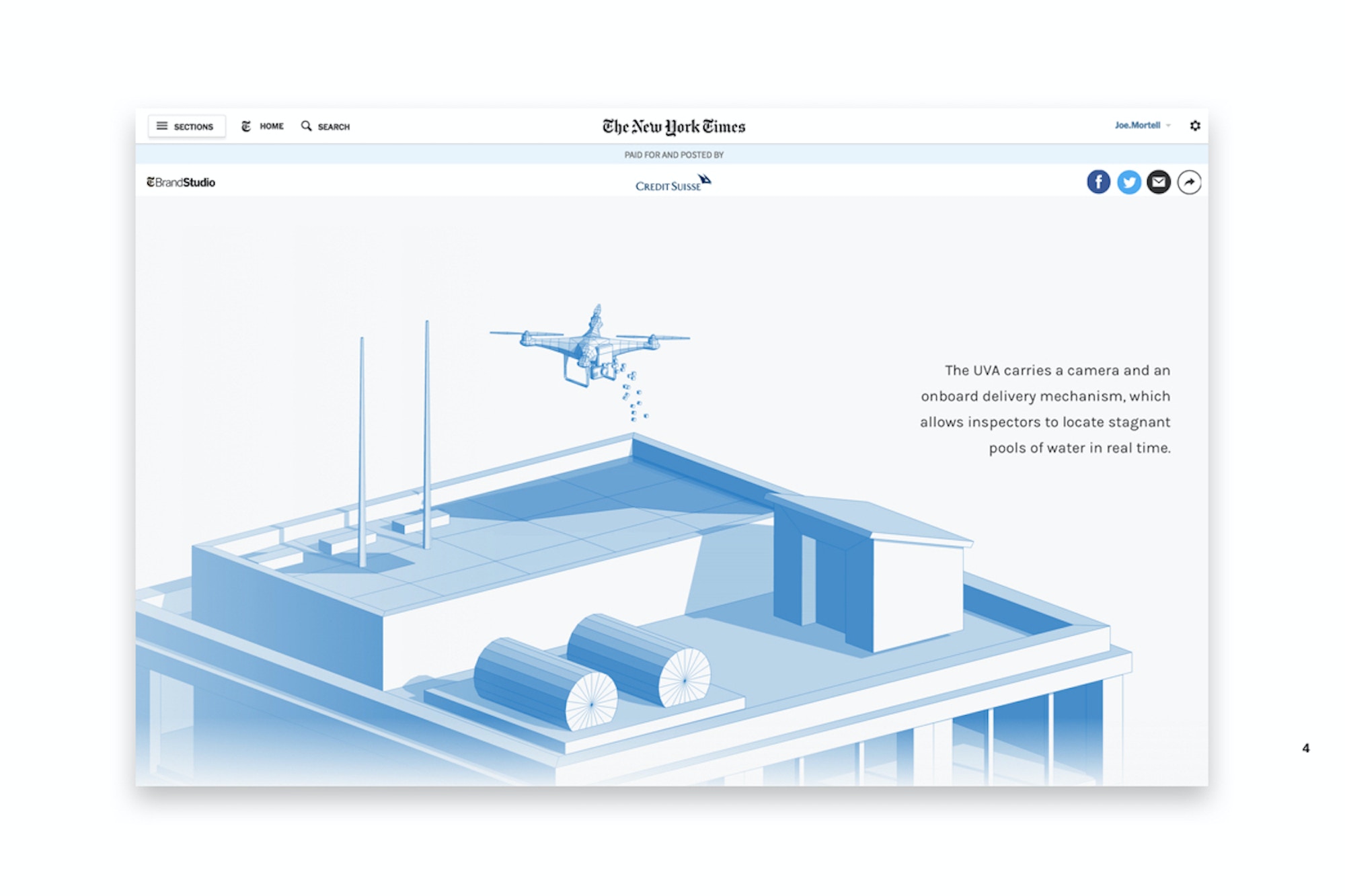 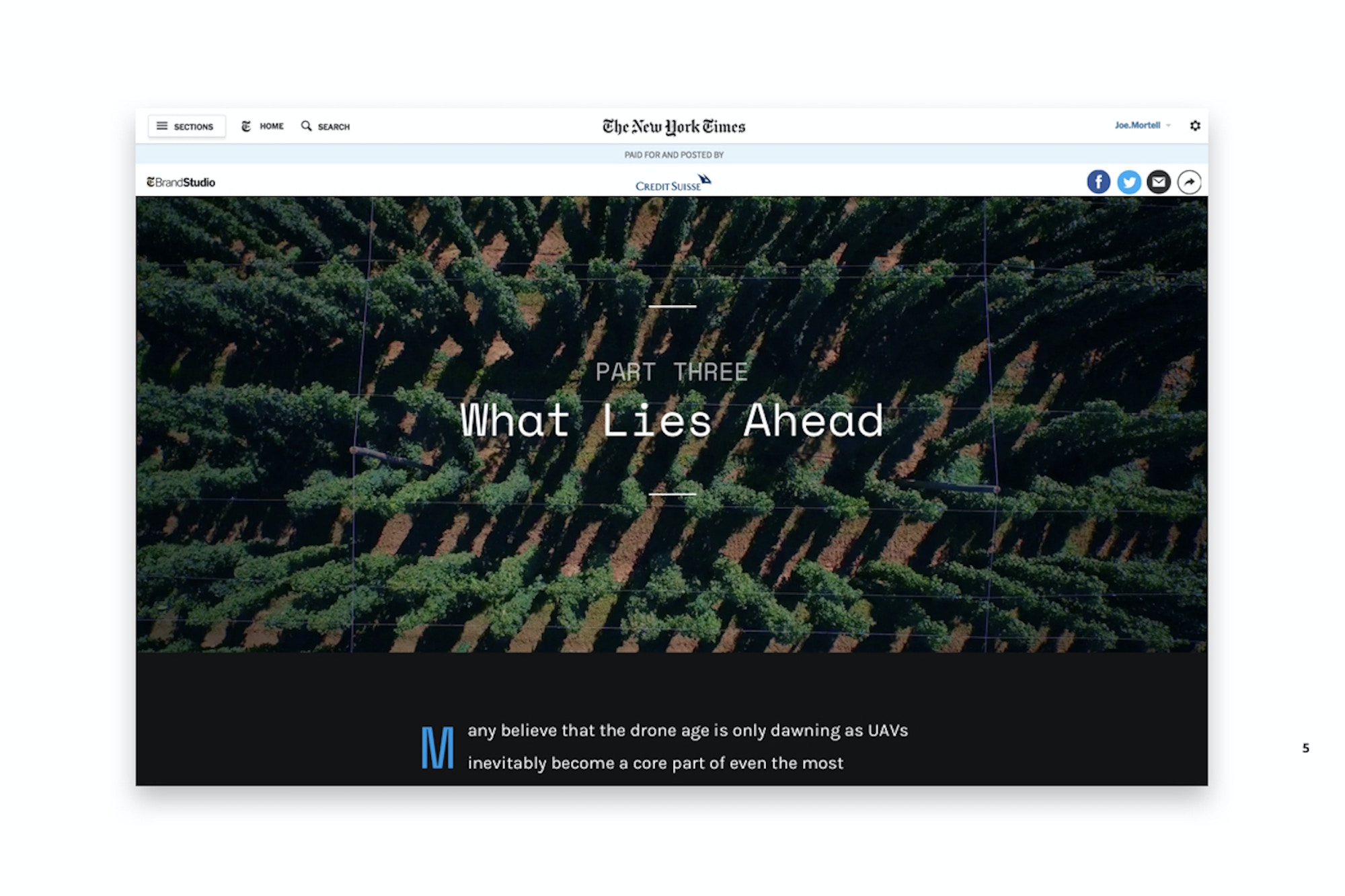 How collaborative is your role?
We’re a very collaborative team. I work with designers, developers, writers, producers and content strategists on a daily basis. I think we’re all very good at blurring the lines of our roles a bit too. We get together in smaller groups throughout the week to work on ideas for new projects. We always come up with something that wouldn’t be possible without someone from each team bringing their talents to it.

What has been the most exciting project of the last twelve months?
We worked on a three-part photo series for Dorchester Collection, where each episode focused on a new artist or group of artists. It was such a pleasure to work with some really talented people on this and the end product is something I’m veryproud of.

We interviewed and photographed the architecture firm Partisans for episode one, artist Per Kristian Nygård for the second, and fashion designer Masha Ma for the final episode. The photographers we worked with were all fantastic – Ian Patterson, Ole Martin Wold, Aaron Joel Santos. On our talented team were editors Jainnie Cho and Jason Li, developer Chris Tough, and producer Elizabeth Heuchan.

What tools do you use most for your work?
The one I use the most is Sketch. I switched over to using it when I was designing apps at Fueled as it’s so light and easy to use. I now use it for layout of our Paid Posts at NY Times and also anything else that’s to do with digital layout.

When I’m working on 3D work I use Cinema 4D with a renderer called Arnold, which produces a really nice lighting and material quality on the work you make with it. After effects is also one I use a lot for animation as there is so much you can do with it. 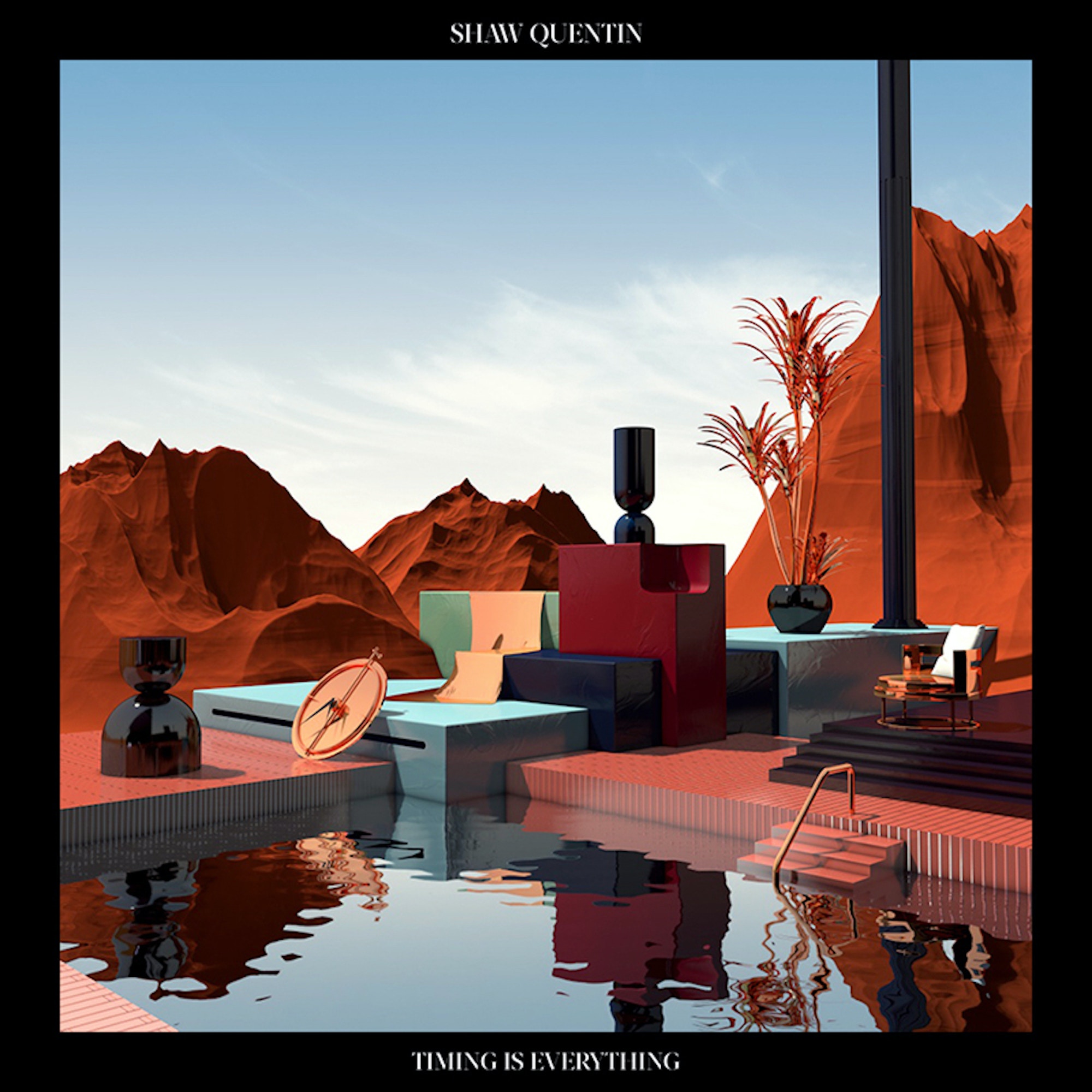 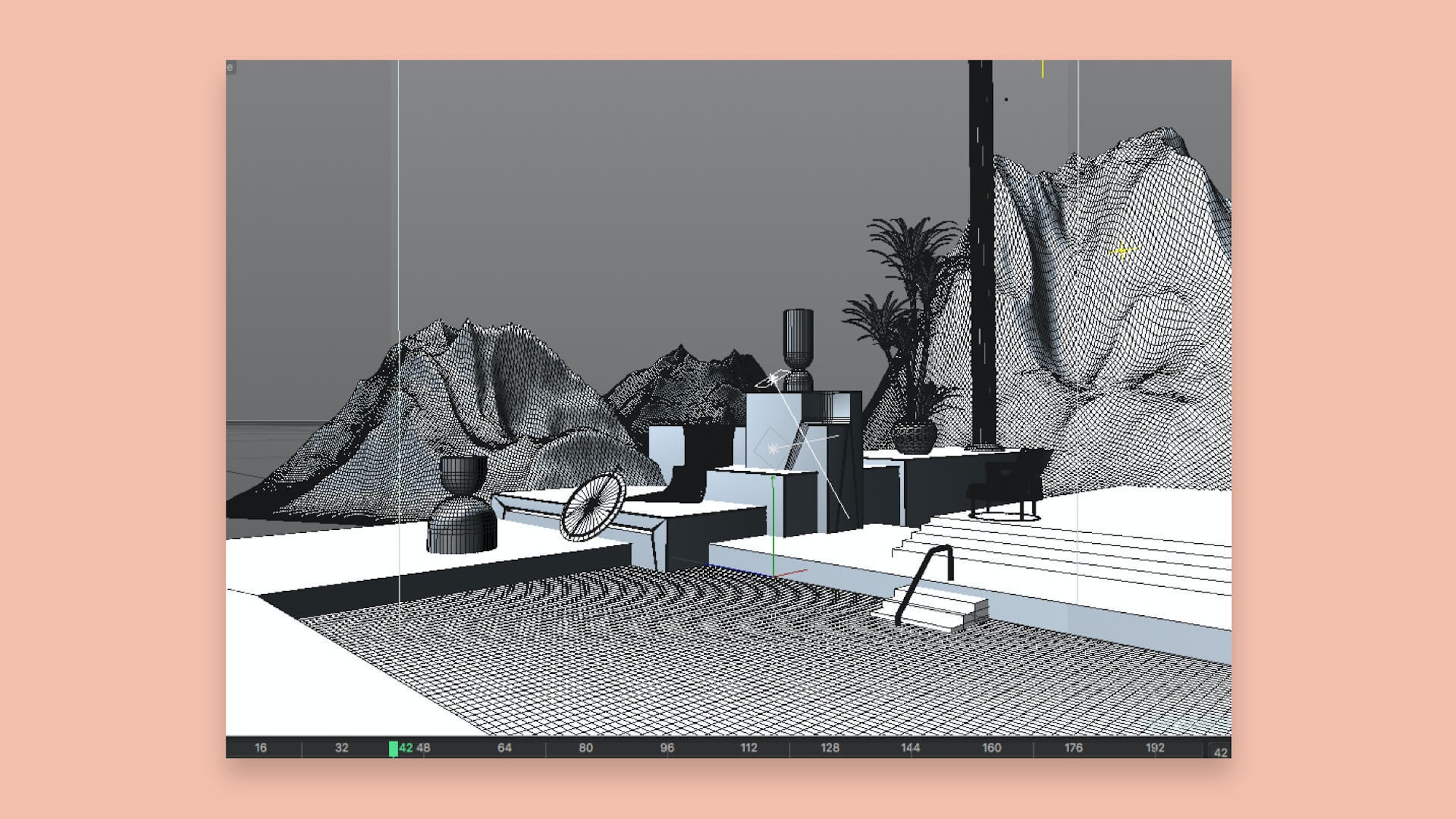 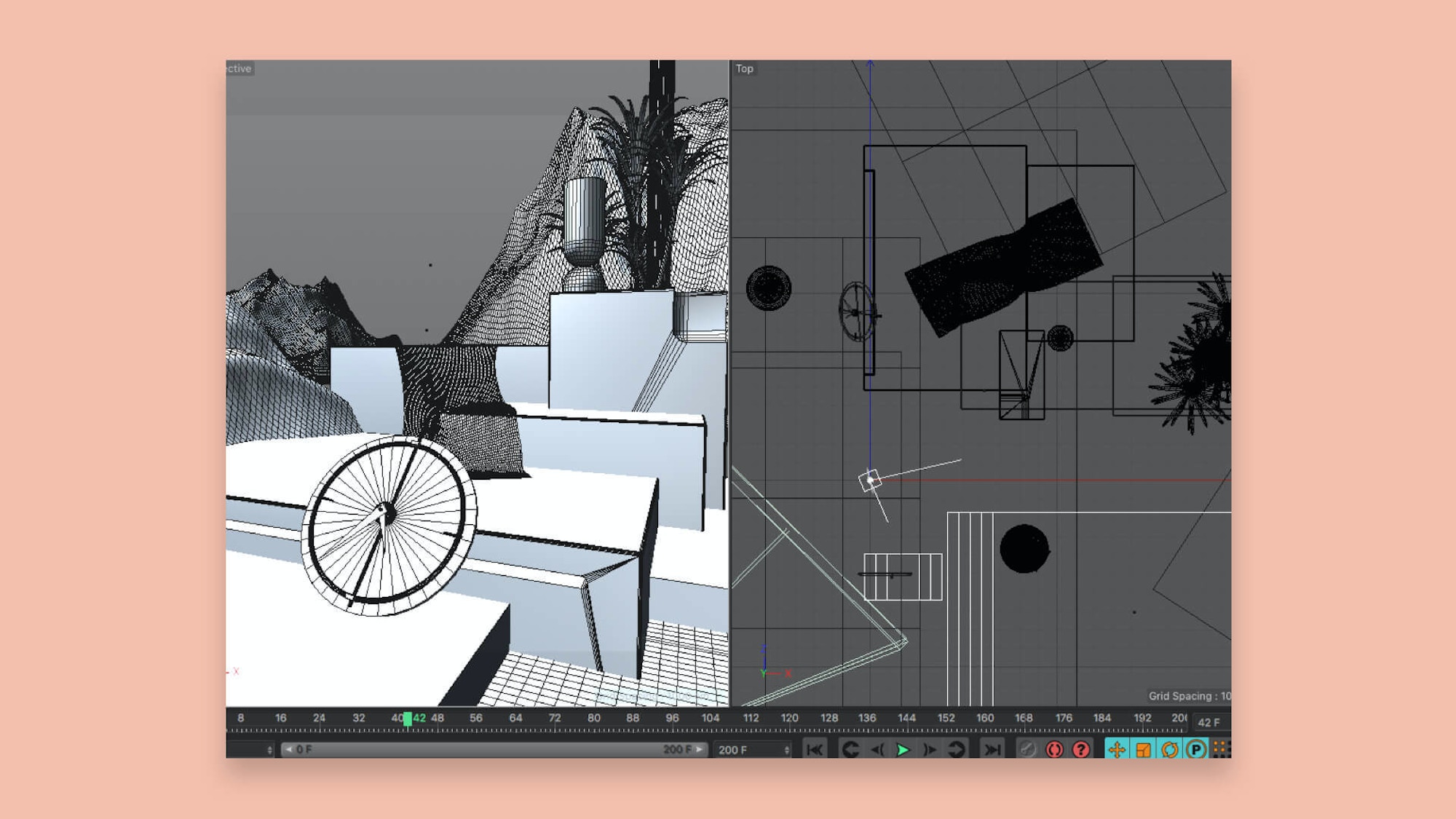 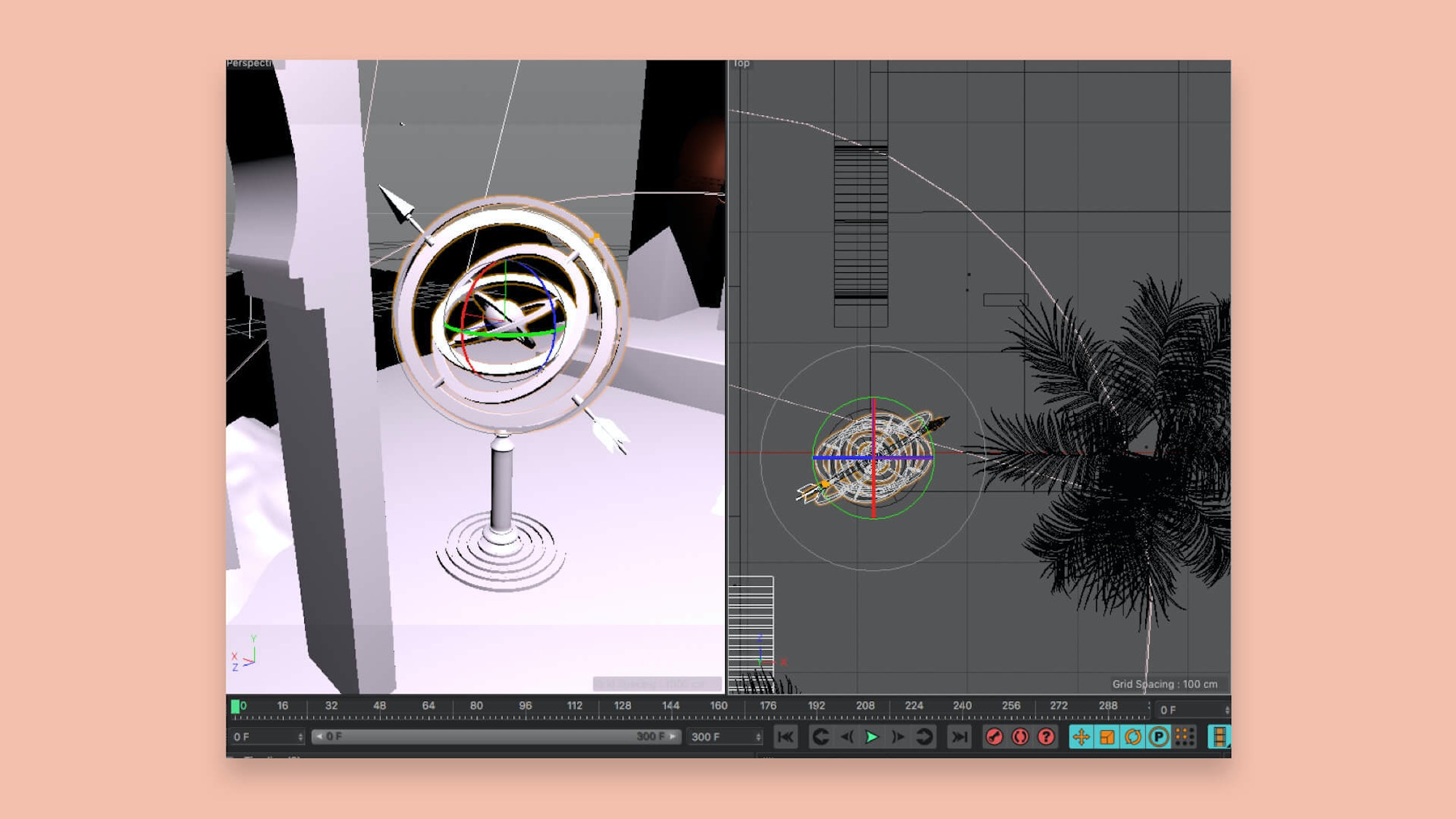 What did you want to be growing up?
The first job I remember wanting is to make artwork for bands. Also, this is quite specific, but when I’m having a day of getting frustrated with design work I get envious of mathematicians. In part because I enjoyed it at school but also when you’re making something creative you’re always going to bit a bit unsure if you could have tweaked something about it and made it better. I really envy the confidence of having solved a maths problem!

What influence has your upbringing had on your work?
I got my first Nintendo at the age of three and was instantly hooked. I became obsessed with playing every Mario and Zelda game I could get. I think playing these growing up ended up having a big impact on why I find design and animation so enjoyable.

After graduating (or first starting out), what were your initial jobs?
I needed to get a job relatively quickly at the time, so I applied for a job as an event photographer and tried my luck by also bringing all of my design work in a portfolio. I got lucky because, by the end of the interview I was hired as their first print designer! I then spent two years there expanding my role further by launching a magazine with them, designing websites and doing the odd bit of branding work.

“I applied for a job as an event photographer but included my design work in a portfolio. By the end of the interview I was hired as their first print designer!”

Was there a particular step that helped your development?
When I started learning animation. I’d been making things on Photoshop for a few years, but by that point I was getting sick of just having this still image as an end result. It was so refreshing to be able to take it past that stage.

What’s been your biggest challenge?
I had one or two early projects before I went to uni that went hilariously wrong, as I was far too optimistic about the amount of work I could do in a small space of time. One of which was the design for a website, which I decided to code myself. I tried to learn some PHP and MySQL and then pulled most of my hair out coding an entire back-end system in three weeks so they could upload a few photos. I didn’t know Wordpress was around at the time, that did exactly that and was also completely free. 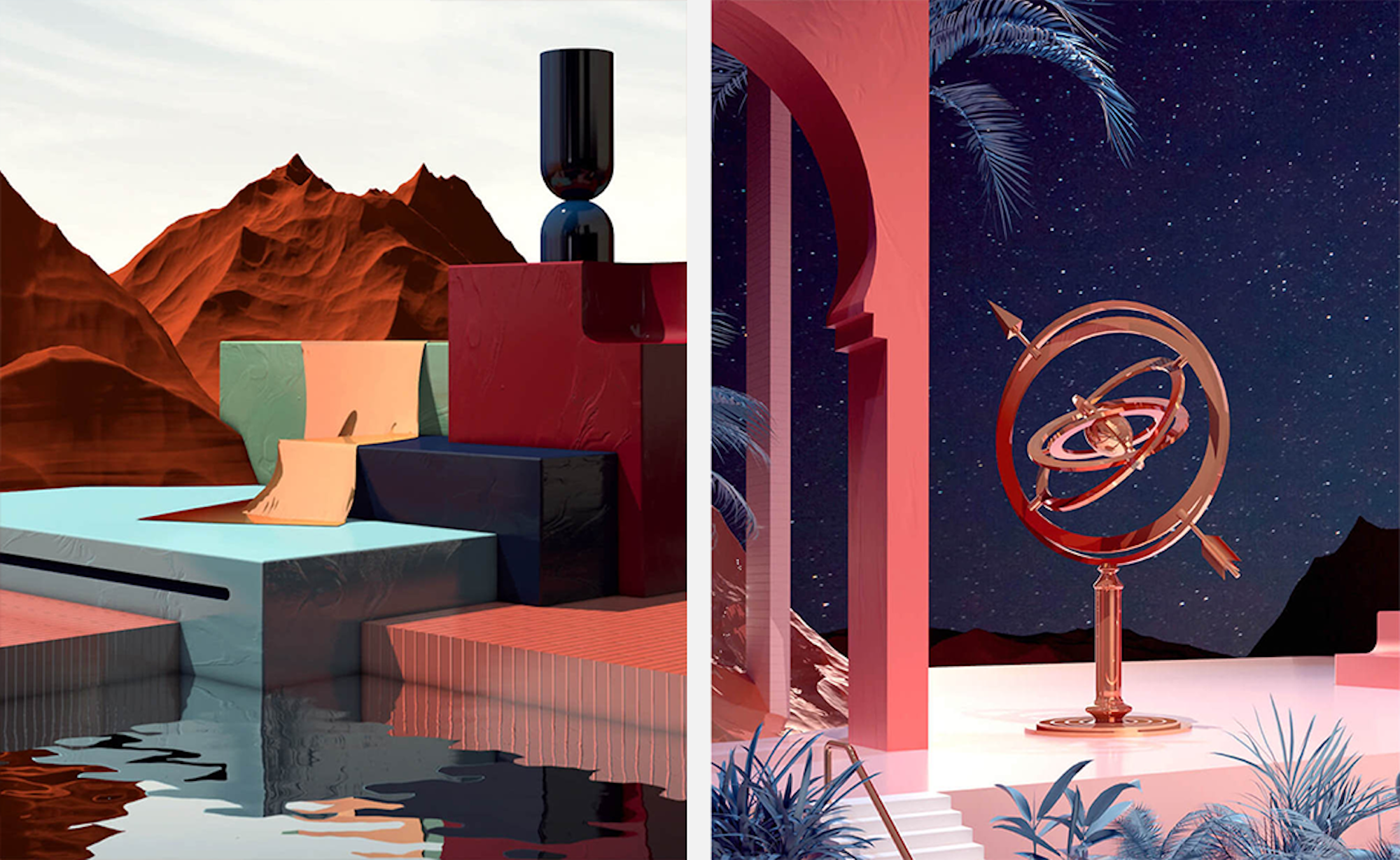 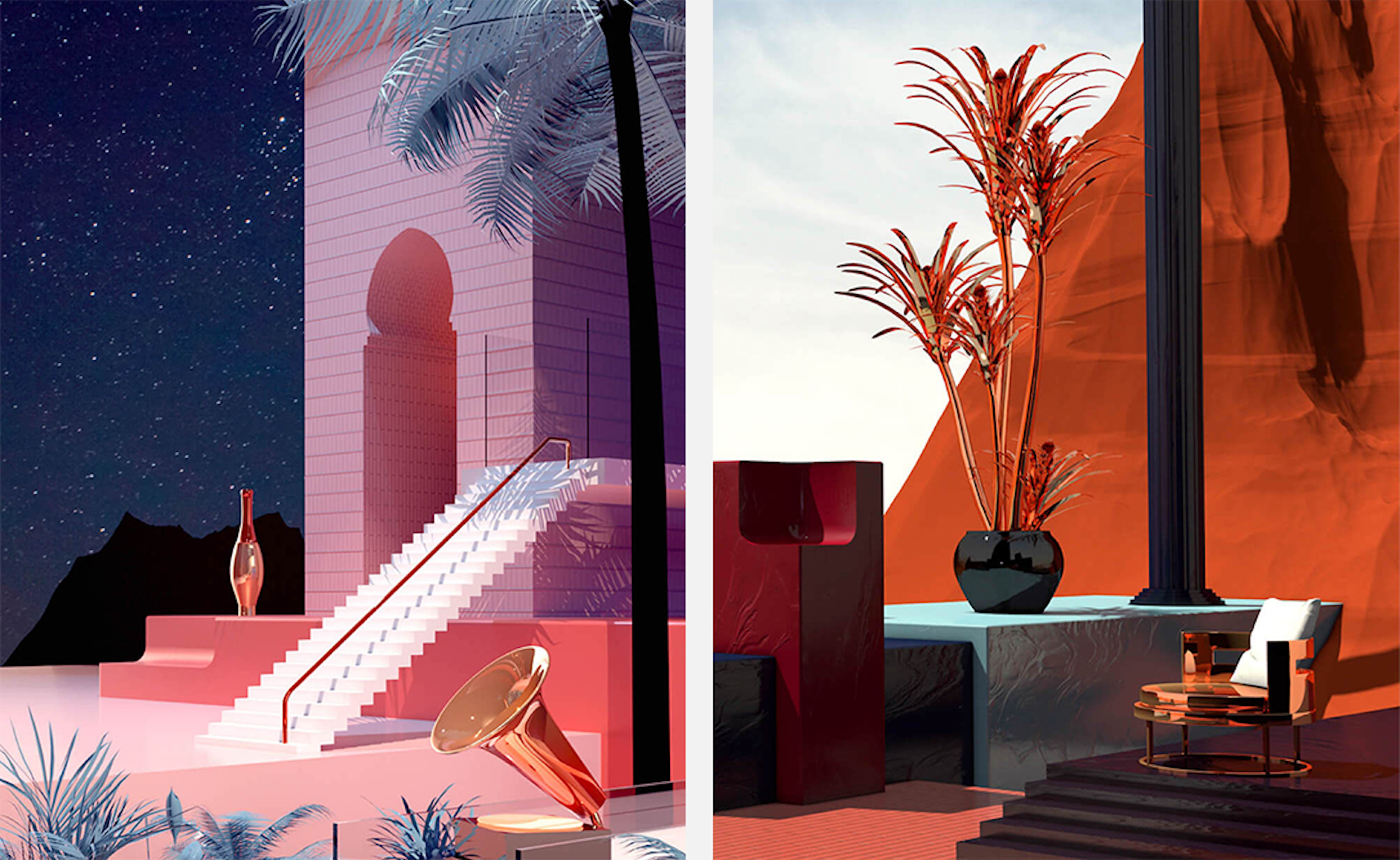 What would you like to do next?
I’m going to keep learning and experimenting with 3D and video work as it’s something that I really enjoy doing. I’d also like to start working with recording small bits of film at some point as I always get ideas for short videos when I’m listening to music.

Could you do this job forever?
Absolutely. There are so many different pathways in design that I will never get tired of learning new areas of it. I can’t think of a time in my life when I’ve been bored with design work and don’t think it will ever happen!

What advice would you give to an emerging creative wanting to get into the same kind of work?
I’ve found that making time for your own personal design experiments is really helpful. It allows you to make something without any constraints and means you don’t always think of designing as just a job.

When you’ve had a whole day of designing, it’s understandable that you’d want to go home and just relax. So try and make something that will take two or three hours, and that you can finish in one evening. Try and not put any pressure on it, so it’s always really enjoyable. Doing this has helped me understand what I want to do more of in my everyday work and also helped me to try completely new areas of design I had never thought of trying.

From BMX videos to animating across the Atlantic: Stephen Ong on his journey to Make It Move

Amelia Leuzzi, designer at DesignStudio, on thinking big and having fun

We talk Spice Girls, identity and knowing your worth with Kate Moross