Parts of the Process — Keeping the creative juices flowing: Behind the scenes of illustrator Jack Hudson’s ad for Rowntree’s

Miniature seesawing workers, jelly conveyor belts and mouthwatering moulds can all be seen toiling away inside a fruit pastille factory in Rowntree’s ‘The Smile Factory’. The ads celebrate the hard work and craft that goes into making every product – an accomplishment easily matched by the colossal collaborative effort of illustrator Jack Hudson, directors Major Briggs and a whole host of CGI specialists, model makers and animators. Although each sweet is on screen for no more than six seconds, it took nine months and almost as many people depicted in each fictional factory to bring these whimsical ads to fruition. Here, Jack talks us through how the vision was brought to life.

Research/pitch fee: Estimated £6K per director
Director’s fee for production was £20K (this was split as it's a co-direction) £10K each

Establish Rowntree’s as a family of brands, and bring to life all the hard work and craft that goes in to making every single sweet so playfully delicious.

Initially, Stockholm-based directors Major Briggs were asked to pitch for the job. They were looking to team up with an illustrator that could create cutaway-style illustrations with a subtle mid-century aesthetic, and that just so happened to be me! Rowntree’s had previously seen and liked a McDonalds advert from Major Briggs' portfolio that mixed both live action film with animation, so they wanted us to do something similar. Both of us were already signed to different parts of the Blink family anyway – Major Briggs with Blink Ink and myself at Blink Art – so it made sense for the collaboration to happen in-house.

“We’d usually have to sit through anywhere up to 20 revisions. Sometimes you start to lose sight of what works.”

It felt like a lifetime before we knew whether we’d won the pitch or not. We began with a script and storyboards and once that was all figured out, we were told to focus on the design and layout of one particular factory and sweet (the fruit pastille) to convince the client that we were heading in the right direction. Starting in the summer, we created all sorts of animation tests, scripts, sketches of the sweet and 3D renderings all the way through to winter 2015.

The brief was super-defined in terms of concept, but the agency were up for me trying out new things – adding my own little details into the design and layout of each factory – but we’d usually have to sit through anywhere up to 20 revisions before even getting close to sign off from the agency. Sometimes you start to lose sight of what works after so many revisions, so it's important to step back and look back at all the previous developments to understand where it's heading and where things might be going wrong. After the last animatic went into a market-research and feedback stage, we finally heard that the project was definitely going ahead in January 2016 – a great way to kick off the new year! 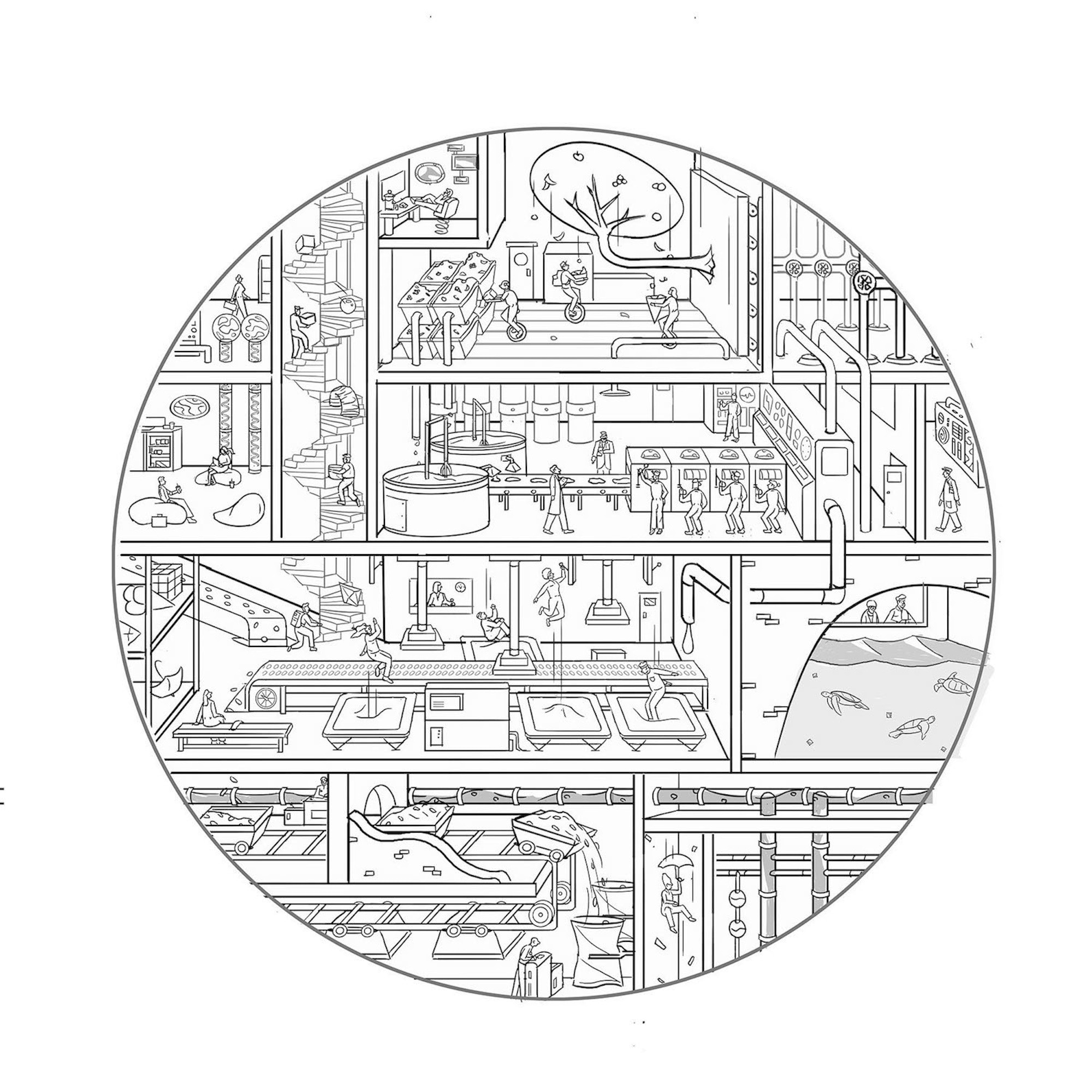 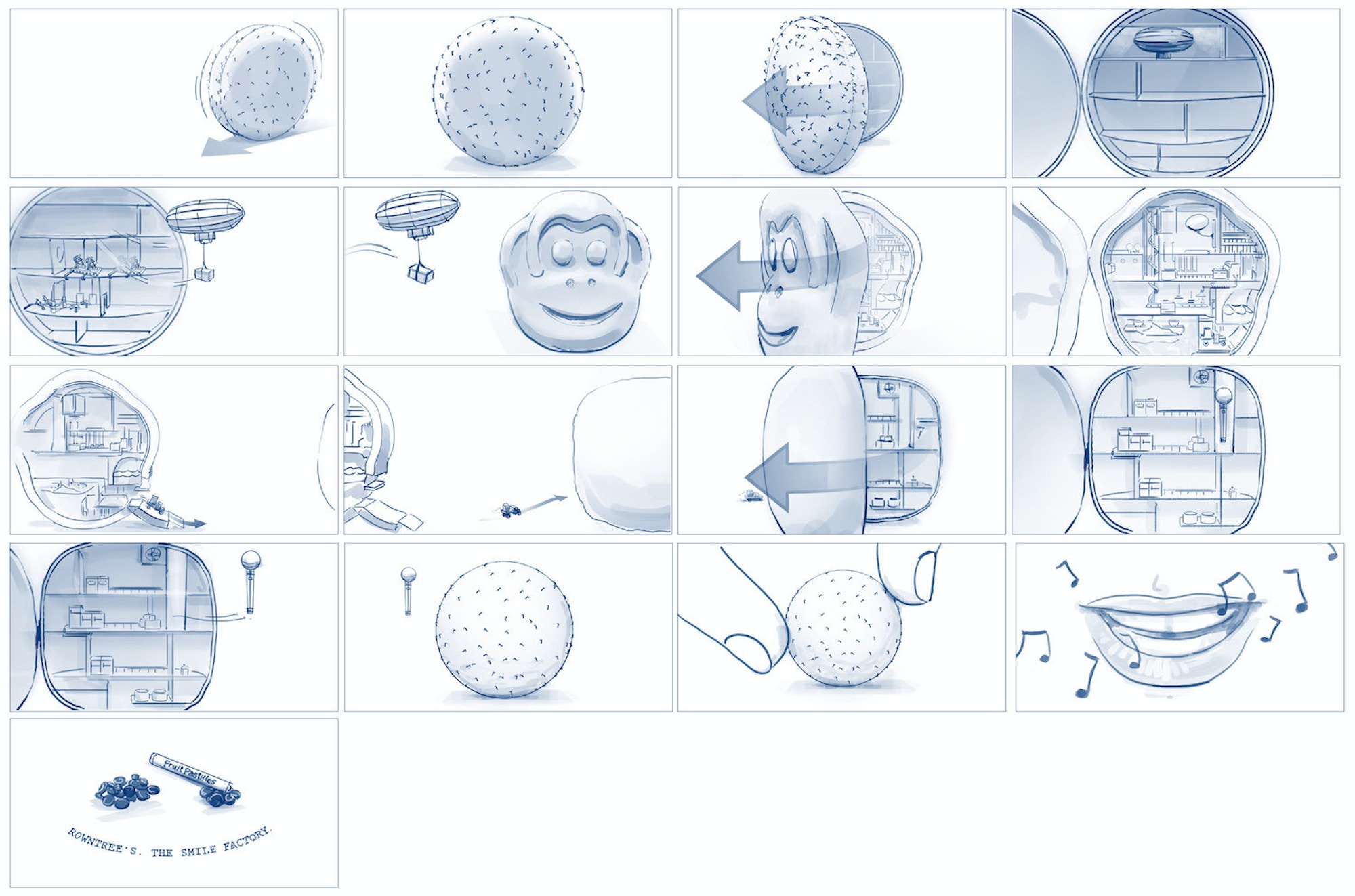 The project began with a lot of meetings at the JWT office in Knightsbridge, London and Skype calls with the co-directors Major Briggs as they were in Stockholm. This was my first commercial directing job so I was really thrown in at the deep end, but timings and schedule were very much agency driven. We were lucky to have a really strong team at Blink Ink who we worked with to create weekly WIP (work in progress) images with a bunch of CGI specialists, model makers and 2D animators.

The creatives at JWT had a very clear vision and aesthetic in mind, which was heavily inspired by the 1950s illustrated cutaways of Frank Soltesz. I enjoyed doing quite a lot of research into cutaway illustration; it came quite easily to me, and I loved this part of the process. It was up to us to really think about the transitions and movements – not only of the tiny workers within the sweets but the transitions between the sweets themselves. The mechanisms and machinery in Fritz Kahn’s work were a strong reference for this, and something that I had to bear in mind when designing the factories with Major Briggs. The difficult thing here was that each sweet would only feature on screen for approximately six seconds which made us realise how important it was for the factories to be both intricate and bold, so that our audience could follow the juice production line flowing around the sweets.

It also became apparent to us at this stage that the Frank Soltsez shaded aesthetic that the client wanted could not be achieved by my illustration alone, so we commissioned the help of Michael Shorten, a very talented matte painter, to mix a combination of my art direction style with the desired 1950s approach. It was so exciting for us to see this after only a couple of days work. Both the agency and client were extremely happy, but we then had to establish an efficient way to animate these more realistically shaded character designs in a way that wasn't incredibly time consuming. Luckily one of the animators, Joe Sparrow, came up with an ingenuous way of separating the character layers which worked perfectly.

“It made me feel quite comfortable knowing that I didn't have to be good at every single job or specialism.” 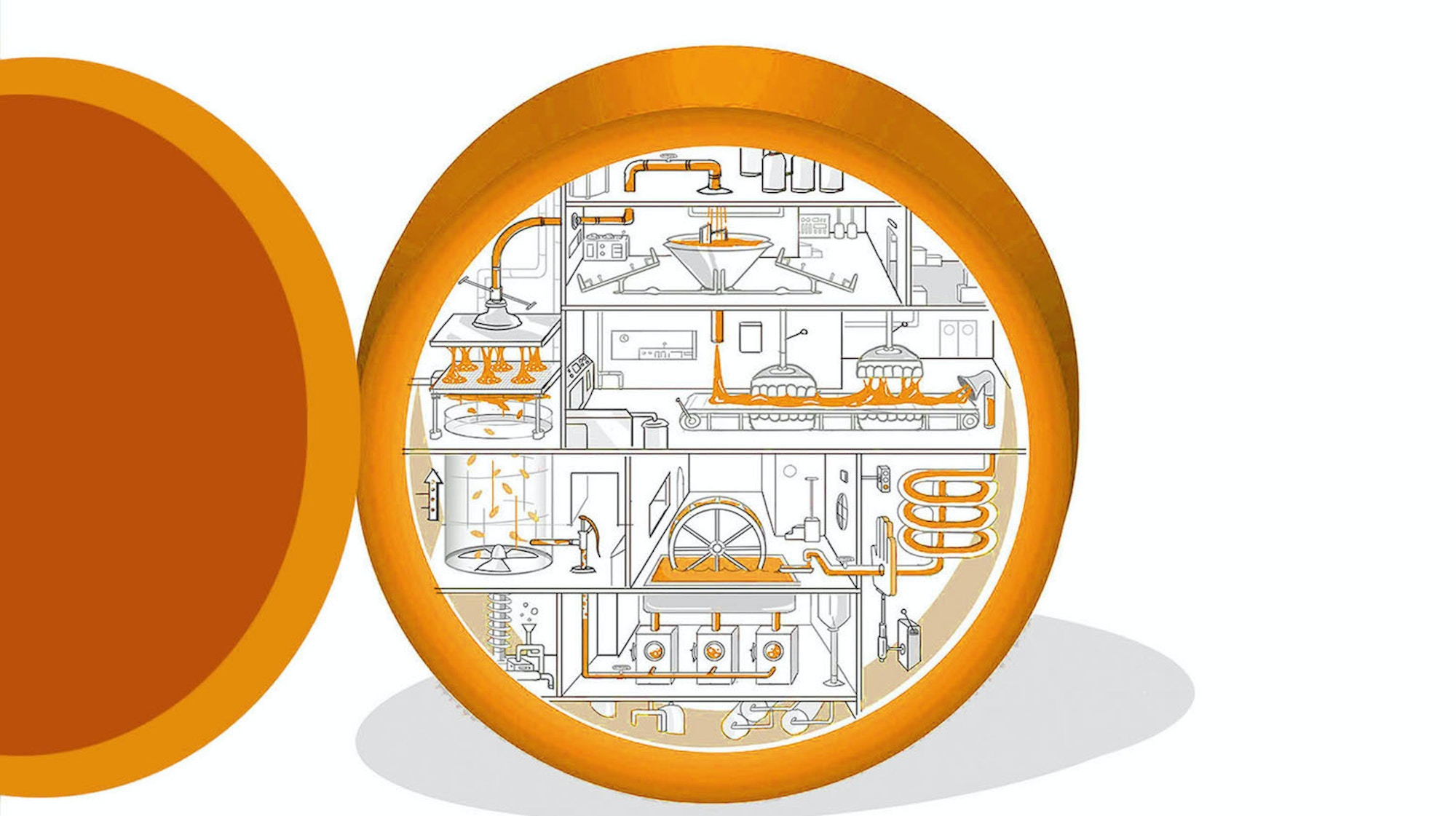 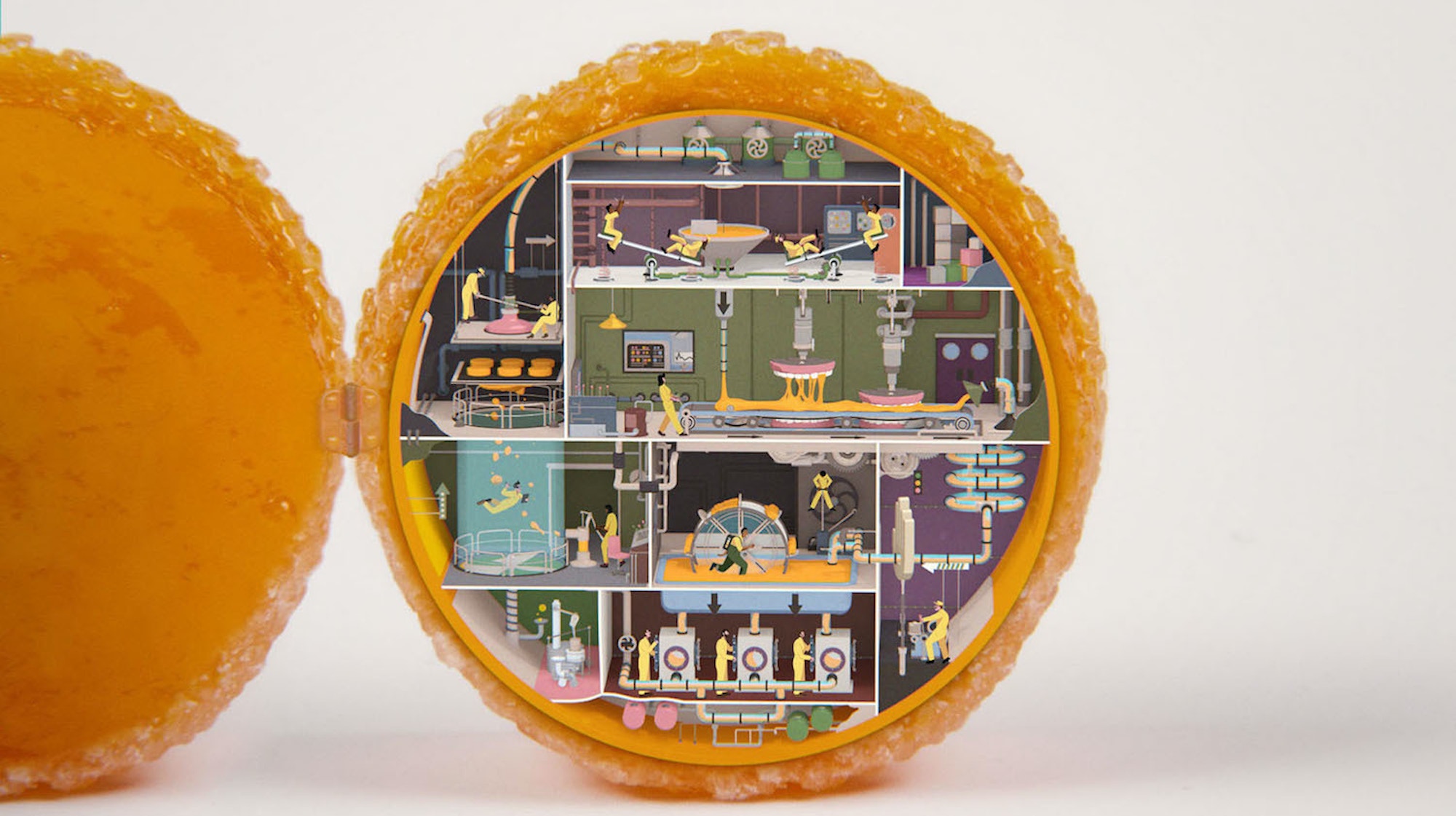 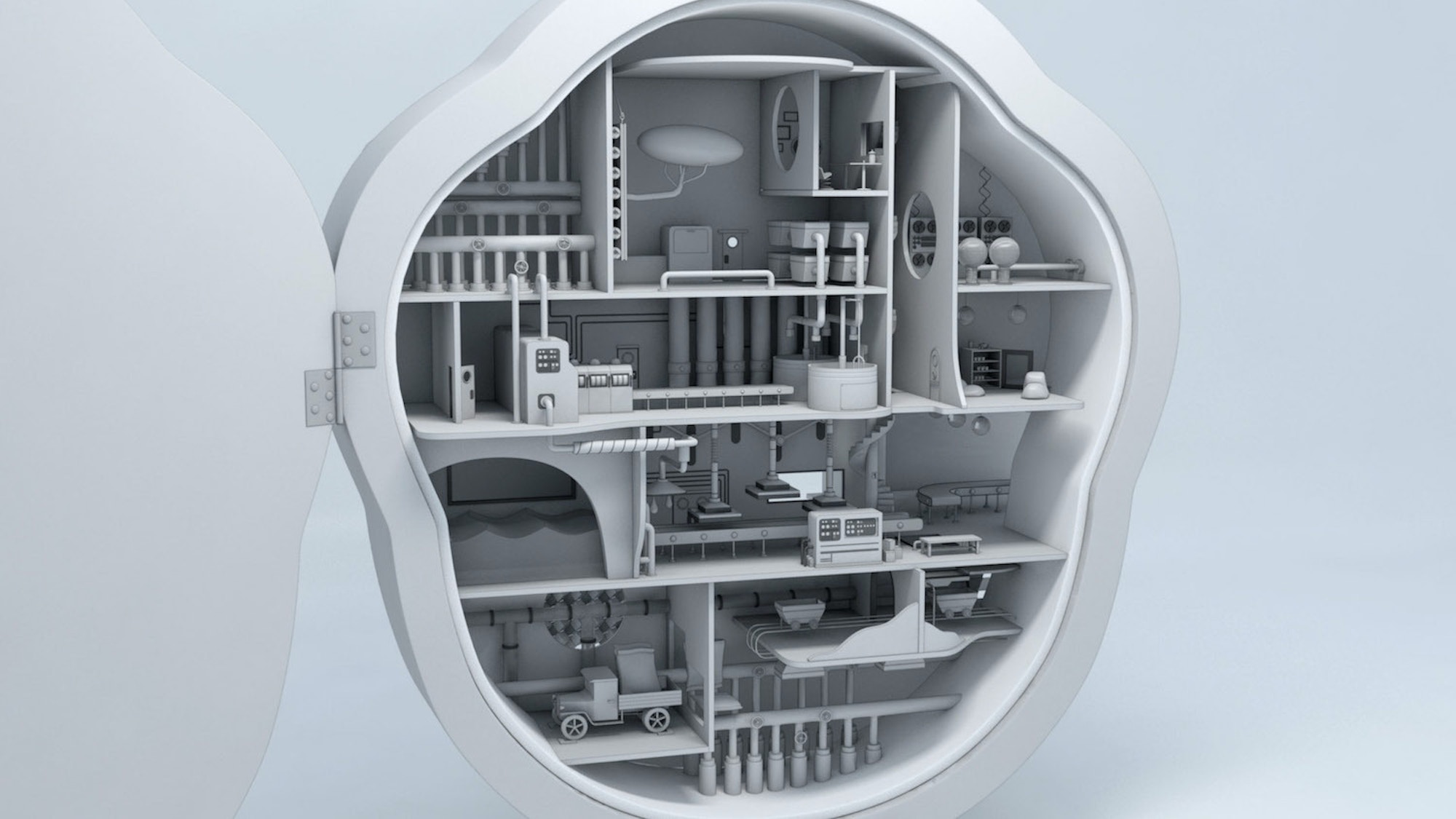 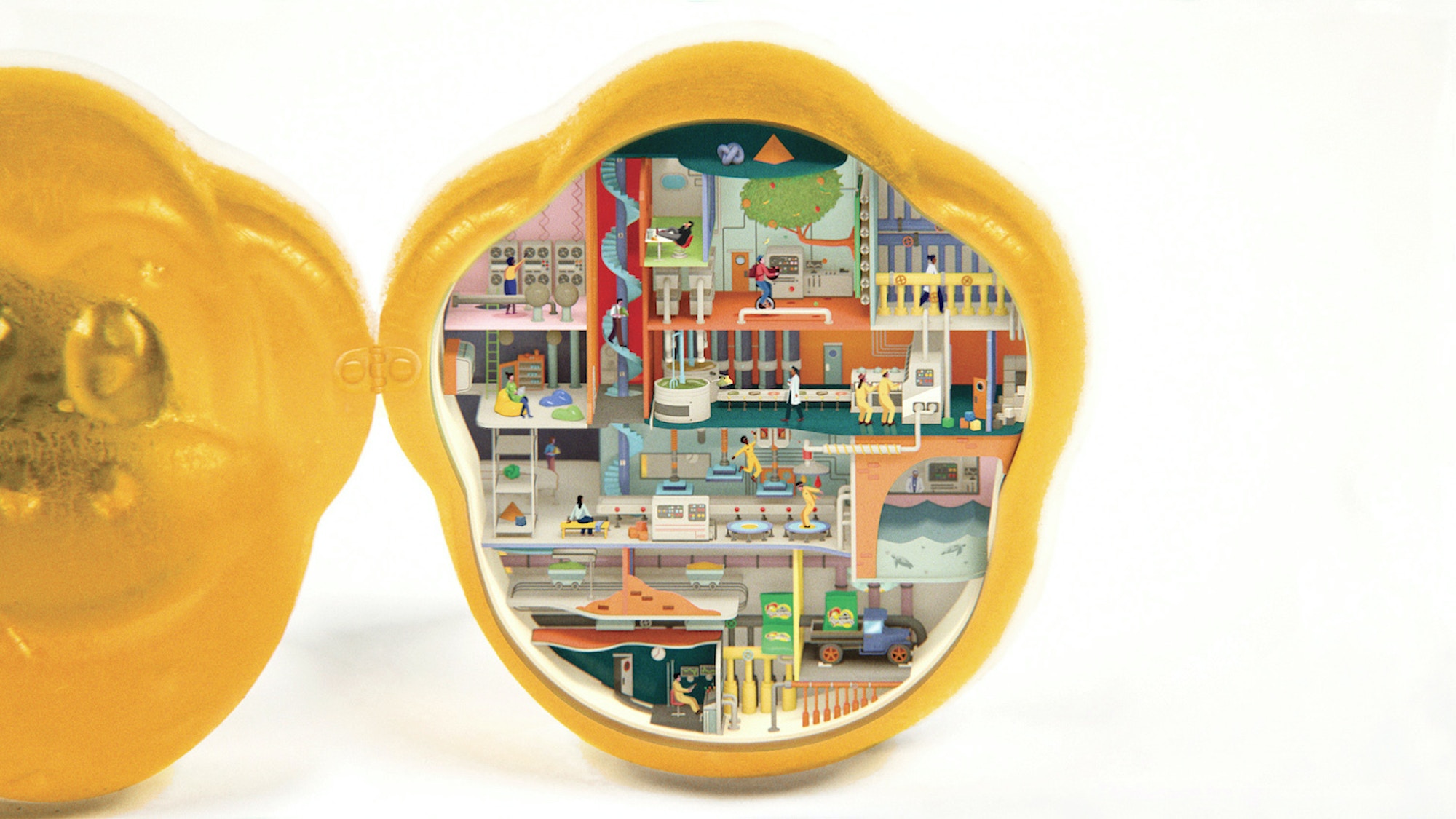 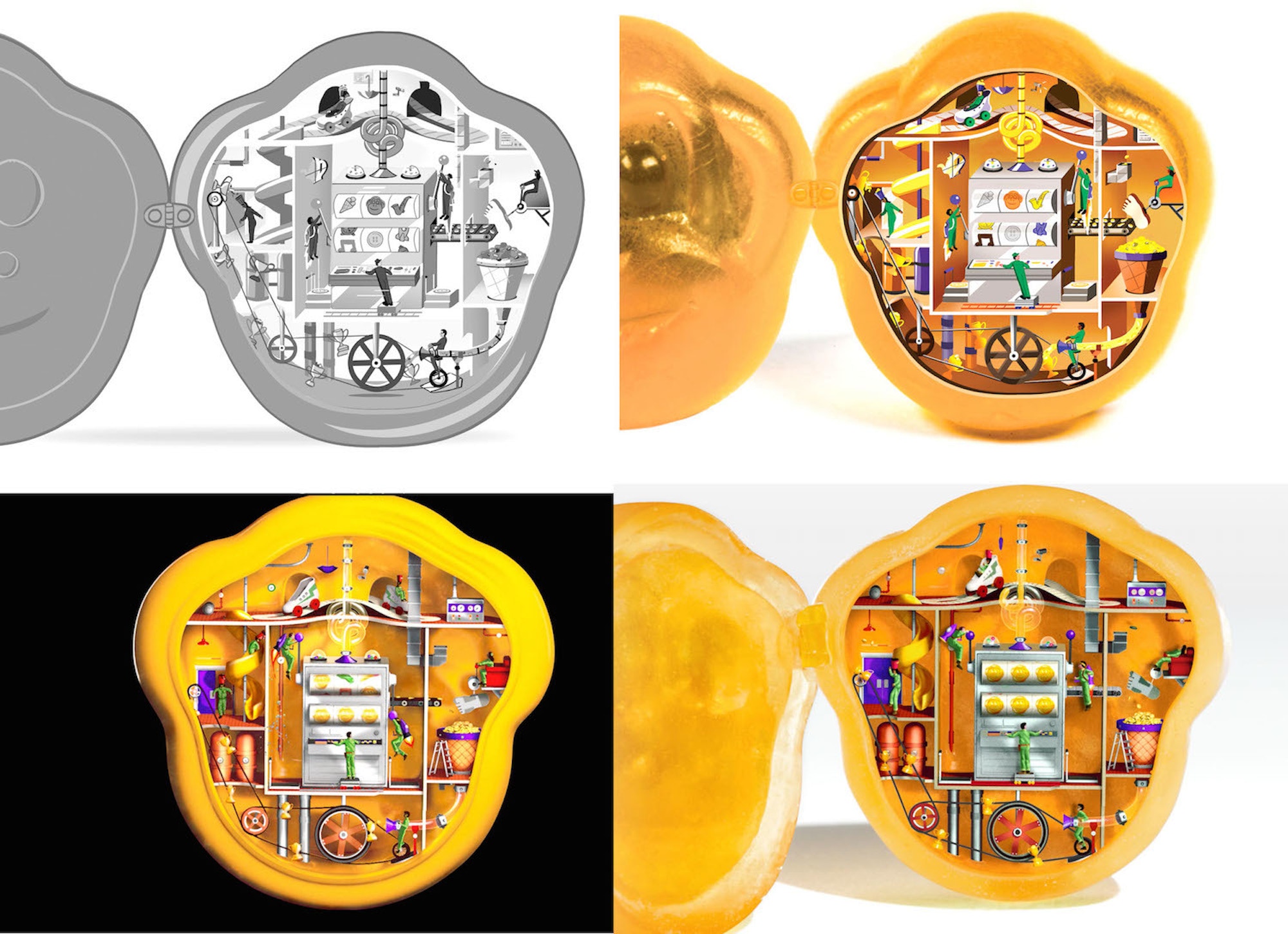 The producers and co-ordinators are integral to the client relationship, whipping all the team into shape and making sure everyone stays on schedule. Our job, however, was to focus solely on driving the visuals, so it was up to us to make final calls on what thing should go where and how things like the juice should move throughout the factory. What you have to remember at this stage is that we’d already had over 20 meetings with the creatives at JWT, so we had to make sure all the client tweaks were being implemented in the designs.

I'd travel down to Blink Ink on Wardour Street, Soho and often hop between the 3D designers working on the sweet factories upstairs and the 2D animators working on the character movements downstairs, whilst squeezing client meetings somewhere in between. It certainly kept me on my toes, that's for sure! The technical director is also essential here in terms of bringing a director’s vision to life and keeping a close eye on things like what programs we should use and the best way to achieve the desired aesthetic within that timescale.

“In the end we had to just bite our lip, and hope they trusted us with their vision.”

Blink Ink have a solid group of in-house workers who are scheduled to work solely on a job, but we also hired various other CGI specialists and 2D animators, some of which would change from week to week depending on the individual and their availabilities. It was an absolute joy to be a part of; meeting so many talented people in such a short space of time, all of whom were enlisted to help you achieve your vision. It made me feel quite comfortable knowing that I didn't have to be good at every single job or specialism because there were other people who were much more knowledgeable than me. It meant that I could solely focus on what I had to do.

As feedback is usually given to you from your producer or co-ordinator, you don’t have to deal with the client yourself but this also adds an extra layer to the process. We would be presenting the agency with WIP images at least once or twice a week to make sure we were on track, but because we had such strict deadlines we would sometimes send over WIP images that neither myself nor Major Briggs were happy with. This was frustrating mainly because we're massive perfectionists, but I understood that often non-creative clients may struggle with seeing the creative vision if an image isn’t polished or perfected. In the end we had to just bite our lip, and hope they trusted us with their vision. 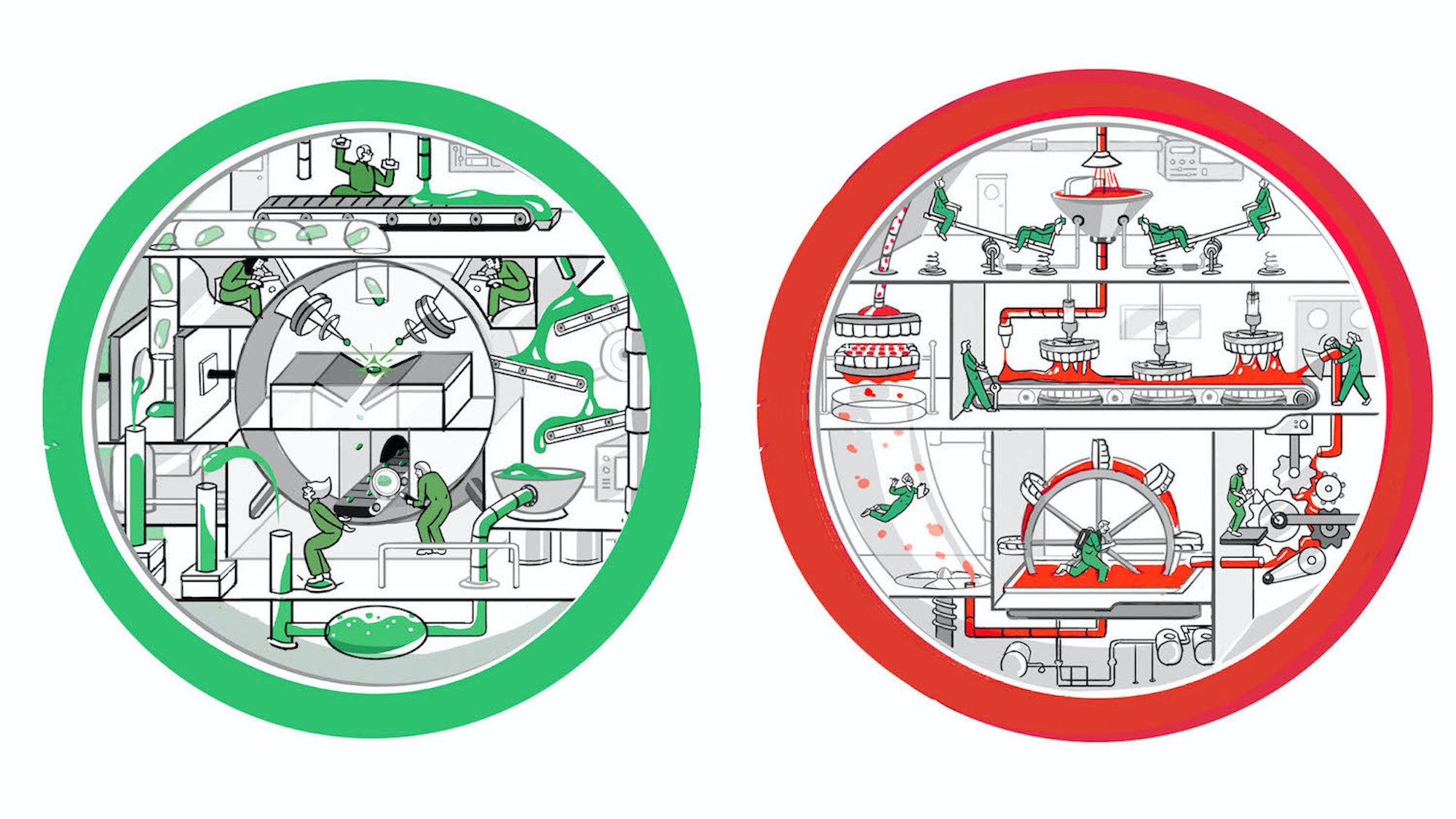 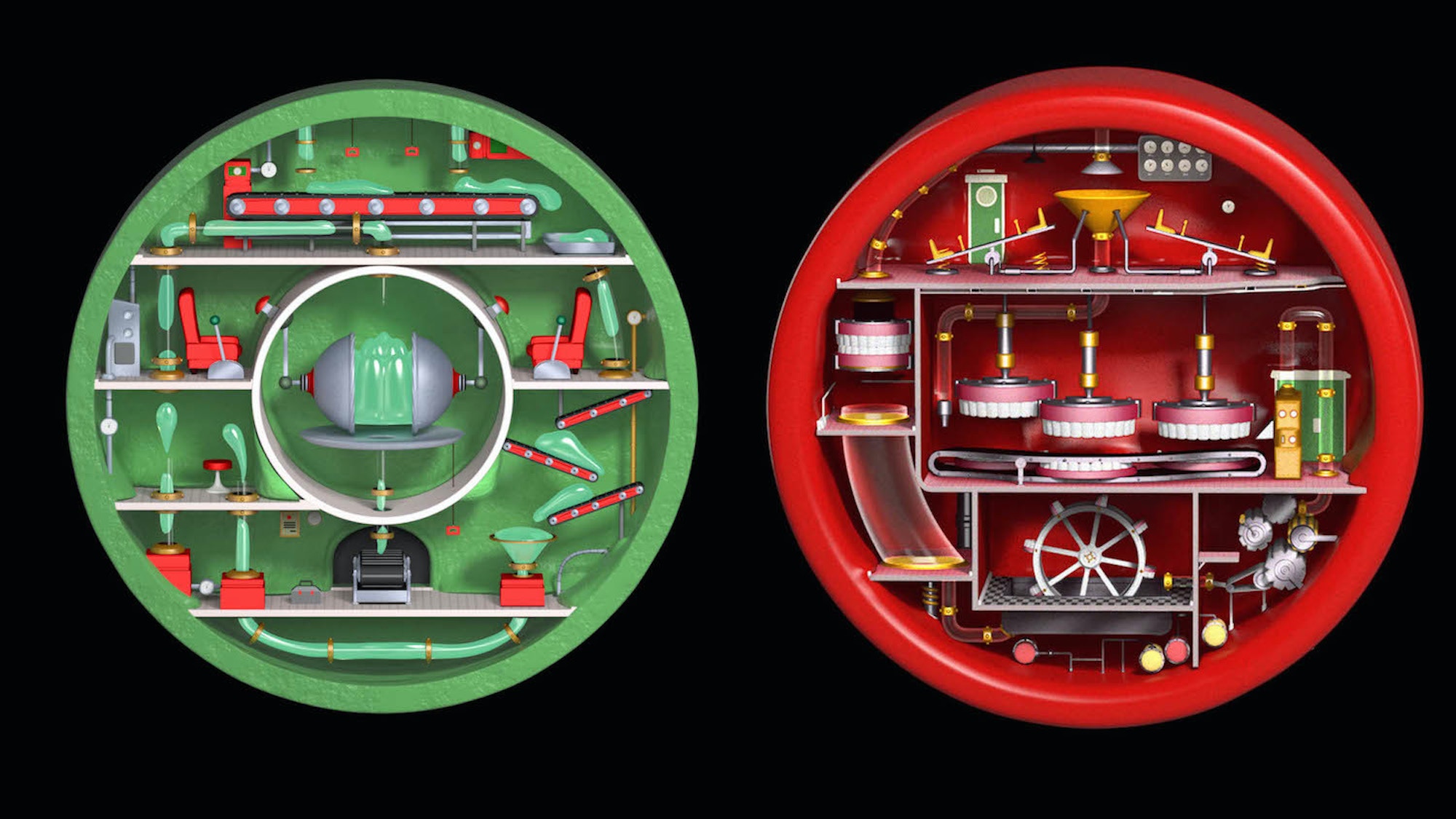 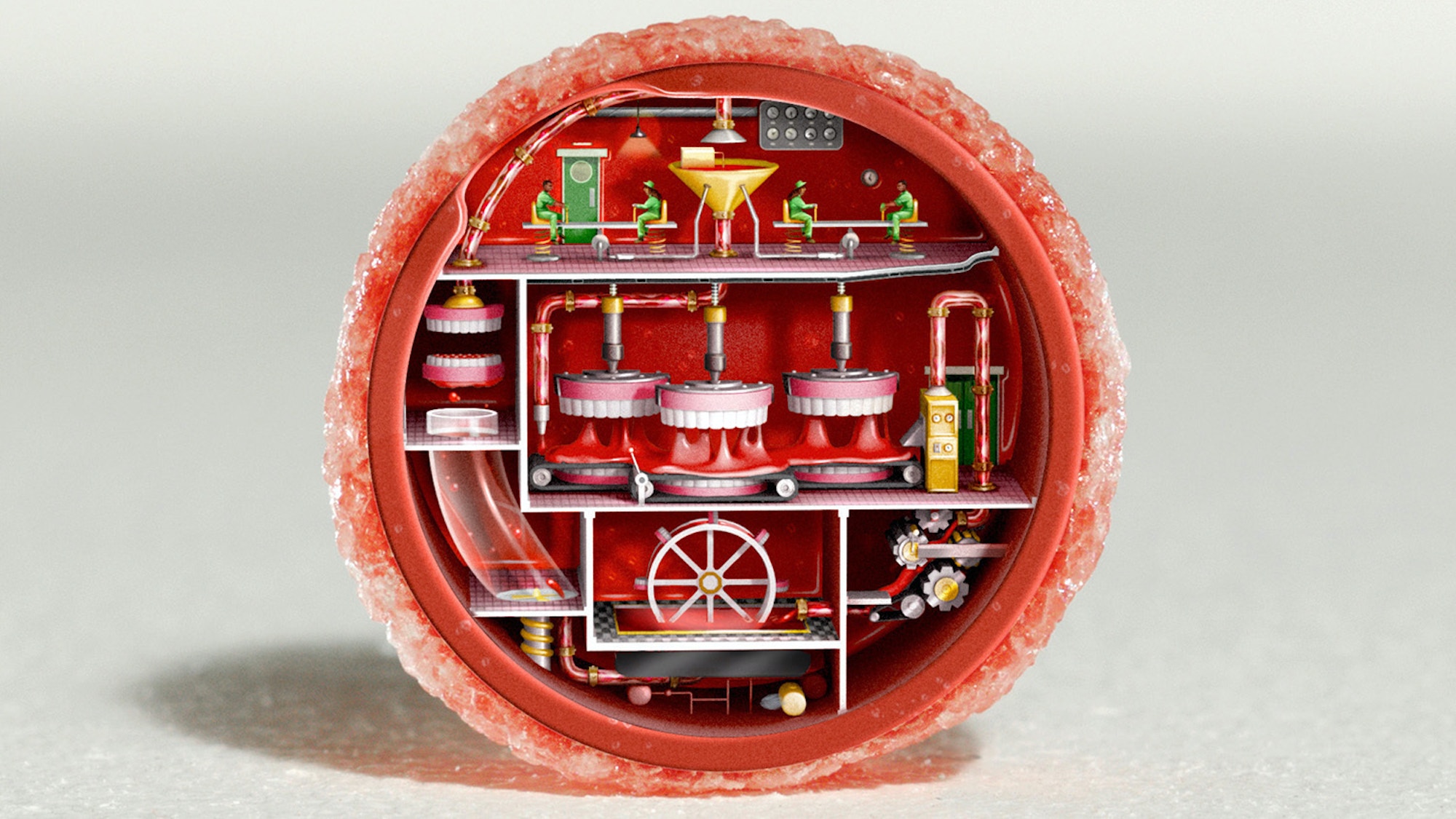 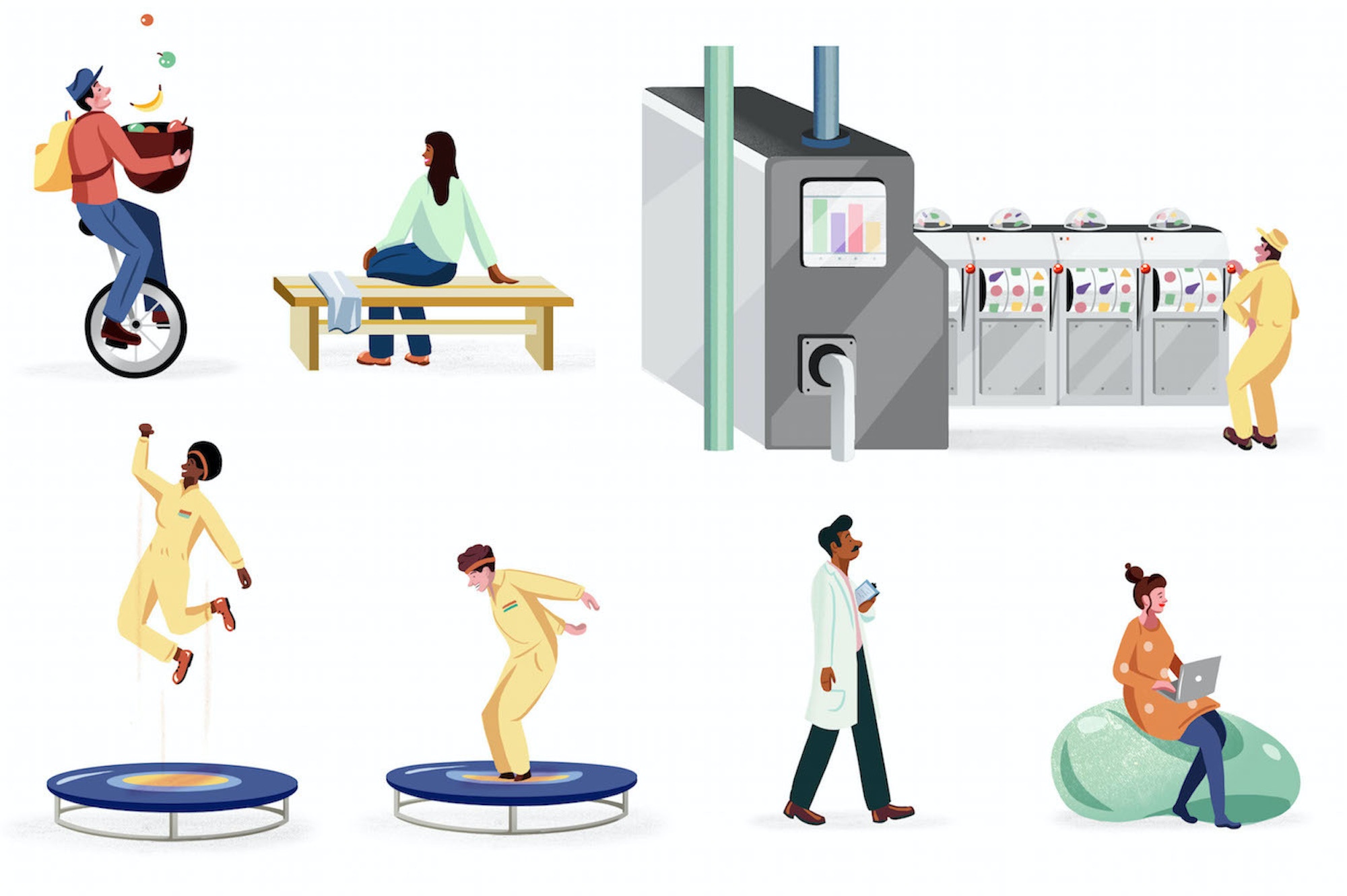 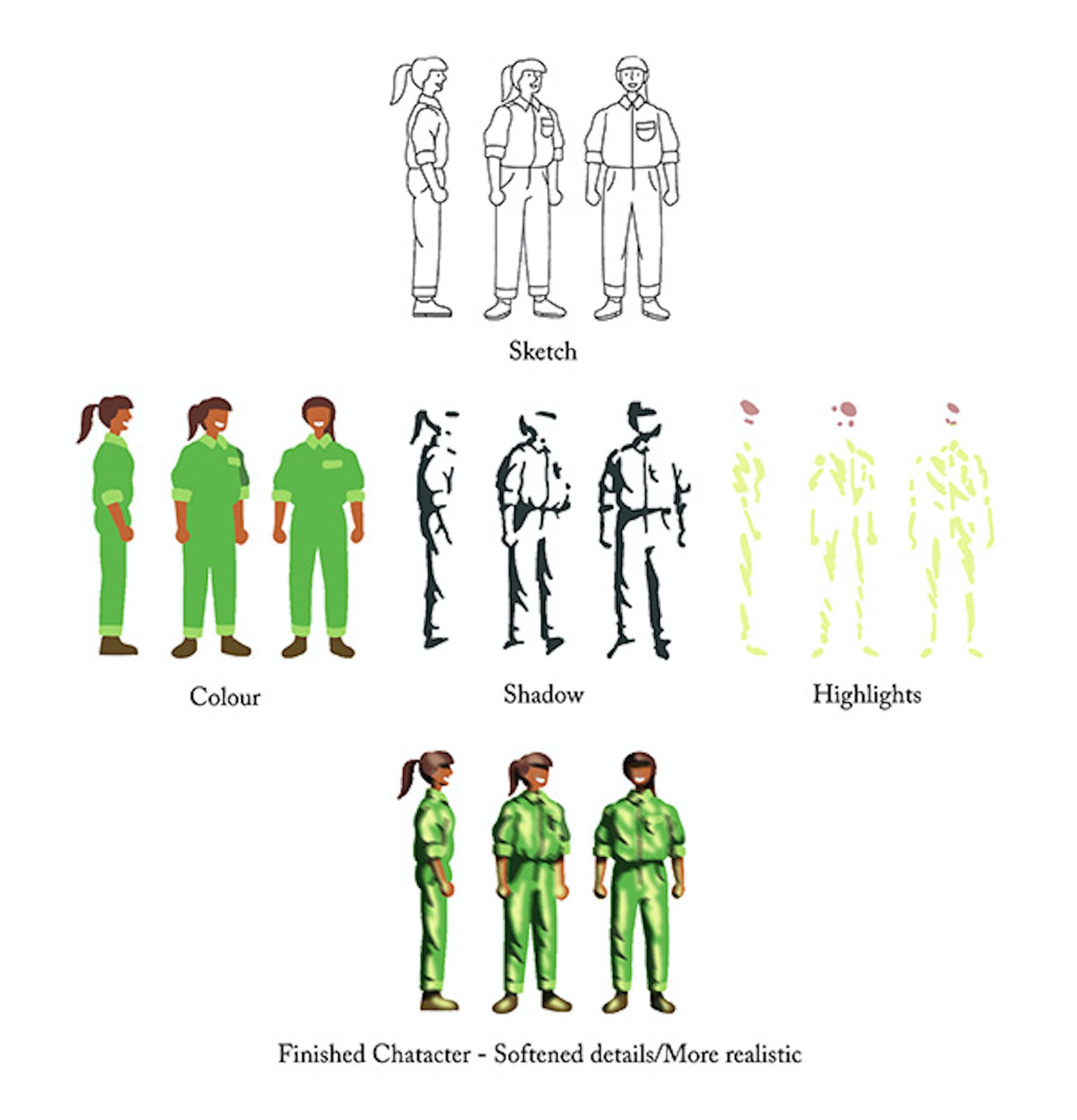 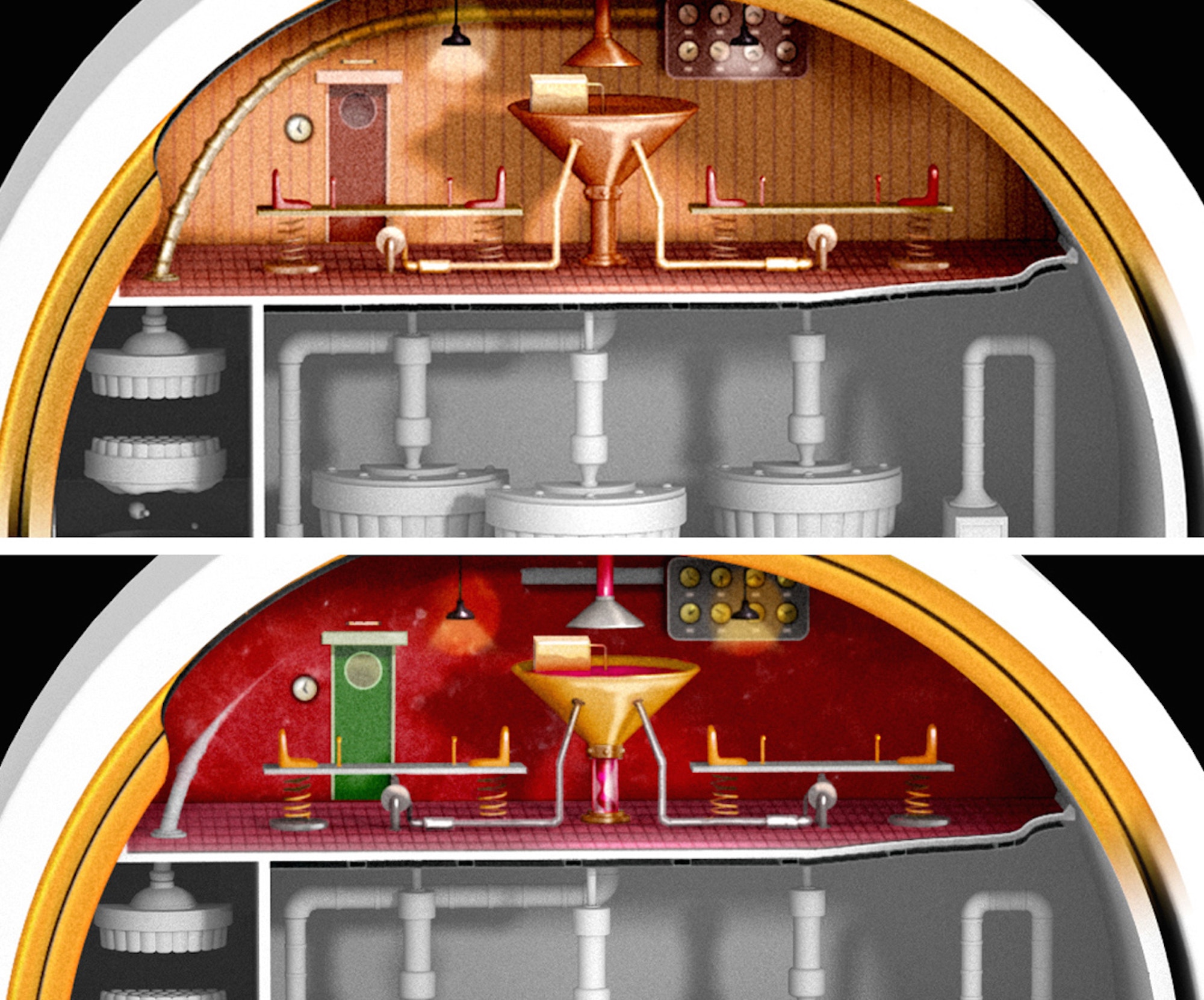 The final outcome was one 30-second HD ad, various short social media outputs (Facebook and Instagram) containing each individual sweet and a separate 20-second advert based on Rowntree’s Minis and featuring a slow zoom inside the inner-workings of one of the factories.

Working on such a huge project that involved so many different people was challenging. It’s so important to keep hold of your own vision without compromising too much – but this is easier said than done when you have a client making many incremental tweaks. As you can imagine, because the project mixed live action with both 2D and 3D animation, this was a steep technical mountain to climb. But it kept the entire process exciting; jumping between specialisms and learning a lot whilst on the job. I learnt a lot about how to direct different creatives and treating everyone with the same amount of respect, but also about my own personality as a director.

By the time a project reaches airtime you’re usually in so deep that it's difficult not to think about its flaws or the thousands of client emails you had to trawl through to get to the finished outcome. But when I think back to those initial emails and the excitement of seeing the Rowntree’s brief come rolling in, I think we achieved more than what I could have imagined. It’s been a year or so since working on it, but I still love how it came out!

Finding your way in advertising without a degree: Anthea Agyekum on what she’s learnt