If there’s one skill Doug John Miller is striving to perfect, it’s balance. Currently continuing his studies in architecture on an MA, the London-based creative has also found himself highly sought-after for his illustration work. Blending both architectural and surreal qualities, his exceptionally intricate renderings of miniature worlds have already been commissioned by the likes of WIRED, The Atlantic and The New York Times. Telling us how he was brought up on a diet of Lego, K’Nex and drawing, it seemed inevitable that an interest in structures would manifest itself somehow. But as for studying architecture? “[It] came out of the blue really,” Doug recalls of his decision to study at The Bartlett. Recounting his journey from architecture to illustration, Doug tells us about how his studies influenced his practice, his admiration for concept artists and using drawing to uncover new details. 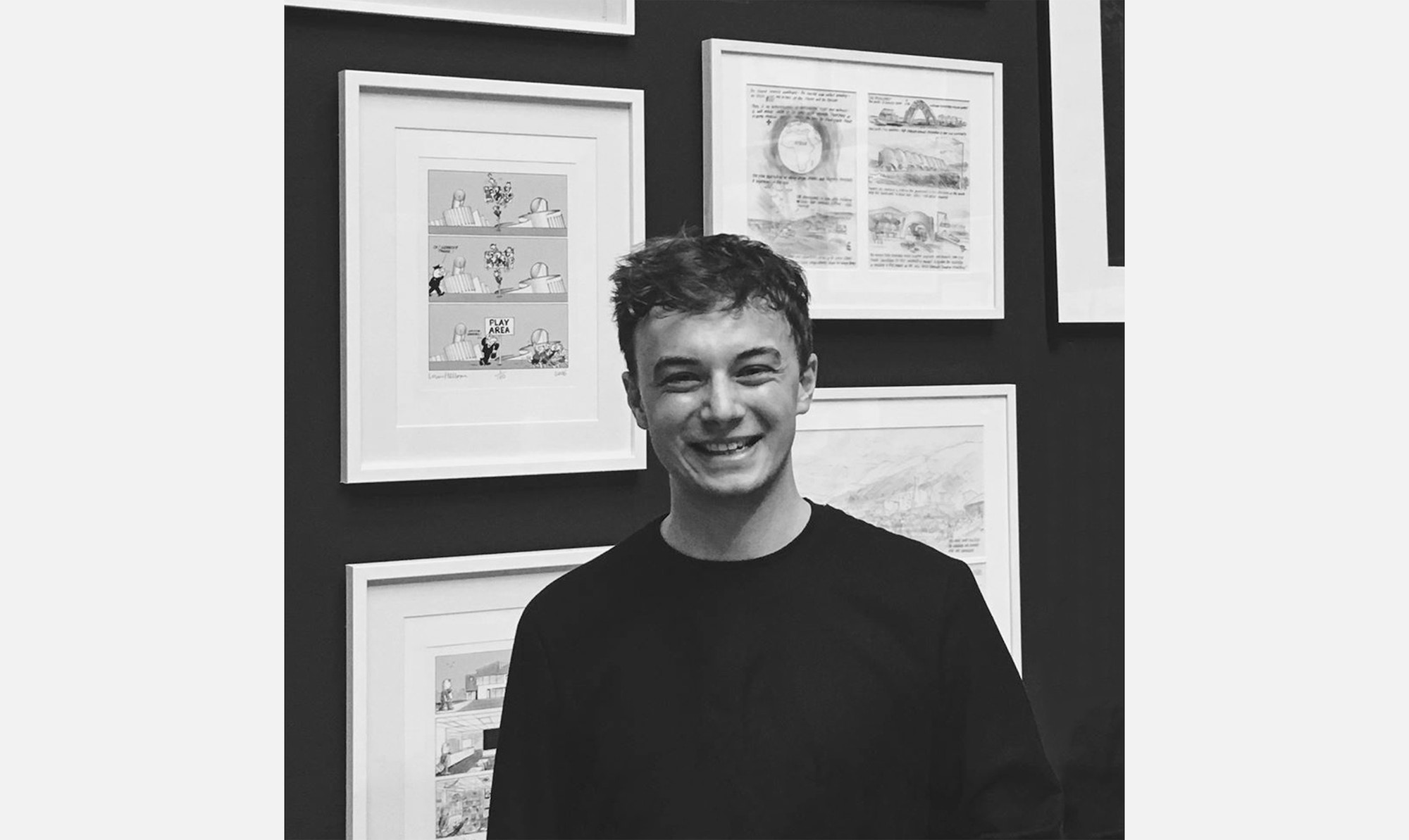 How would you describe what you do?
I'm a freelance illustrator with a focus on architectural drawing. Most of my work is for a mixture of magazines and personal clients. My current work is based around architectural scenes; little fantastical dioramas and isometrics that tell small stories. My most detailed stuff includes big scenes that contain characters, buildings, inventions and out of scale scenarios. Clients are always looking for something different, but there is always something architectural going on – I think that’s my strength.

“Clients are always looking for something different, but there is always something architectural going on – I think that’s my strength.”

Balancing these two things can be hard. Once your work is out there, clients often reference an image of something you have done in the past, wanting ‘something like this’. It’s very complimentary but it makes it hard to remain motivated to create something new or different, and means that the only time you really get to stretch yourself is on your own time. 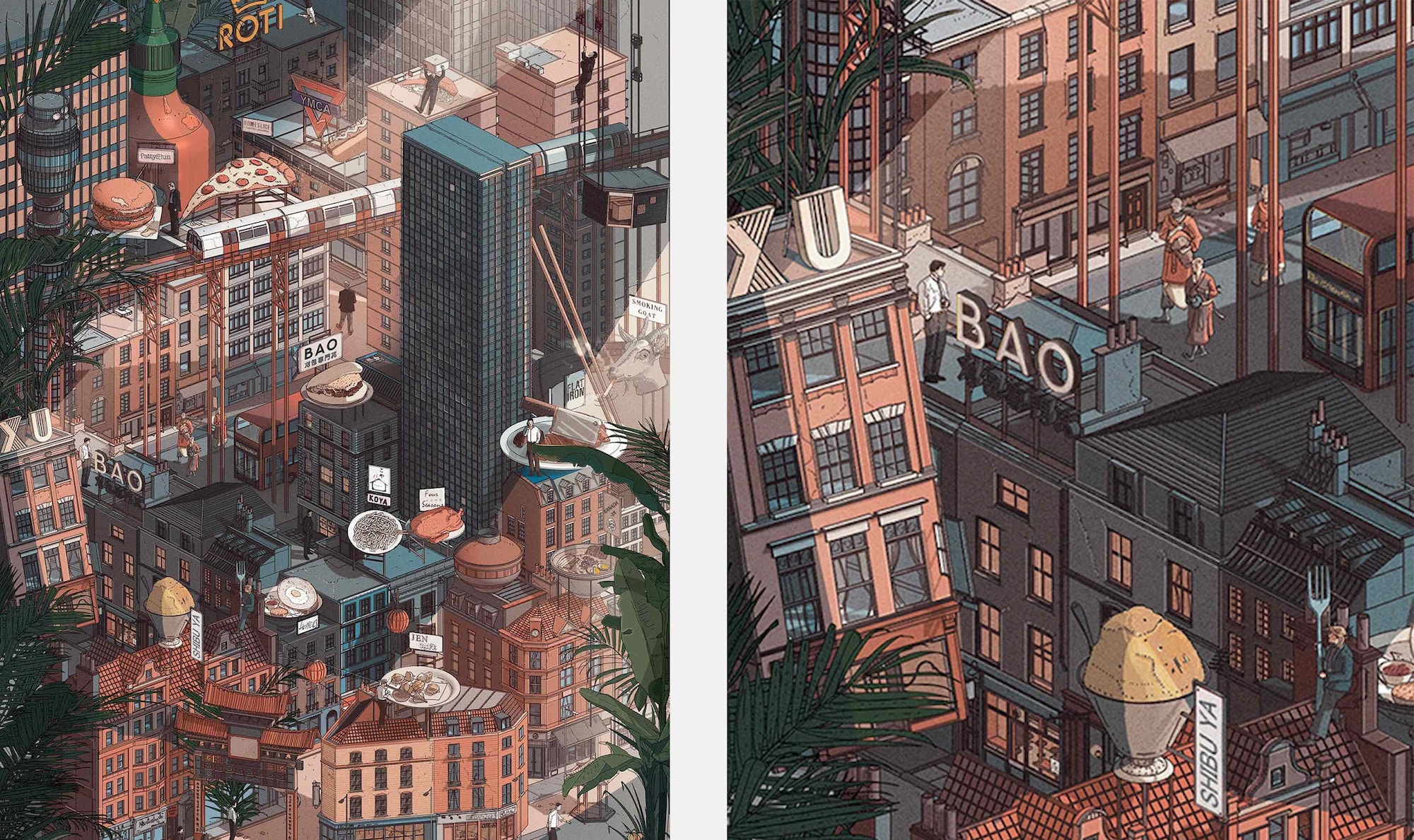 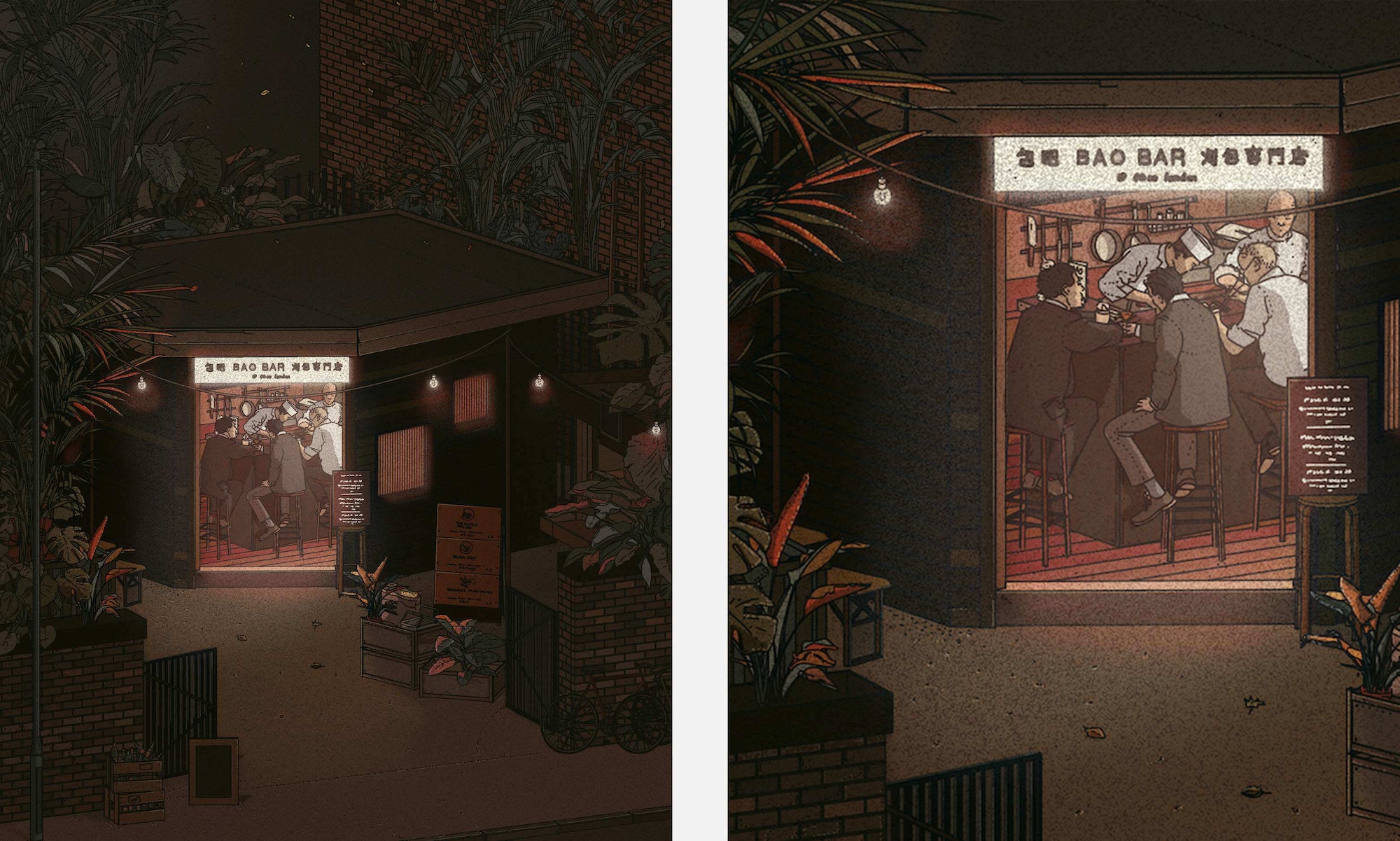 How collaborative is your role?
Not at all (which is a shame). I work by myself – the major downside of being freelance! However, my most enjoyable illustration jobs are the ones in which a good art director has really pushed for something, or the client has a clear idea. In that sense, collaborating to make something with someone (and for them) has been the most rewarding for me.

For example, I’ve collaborated with [restaurant] Bao London and [artist] Shing Tat Chung on several illustrations. Having someone with a strong vision that you get to execute is great – especially when you feel like you can surprise them with details and ideas that might not have otherwise popped up. And vice versa – when they come up with suggestions and amendments you wouldn’t have otherwise thought of.

What are the most and least enjoyable aspects of your job?
I’m currently studying architecture full-time, which means that work-life balance can be pretty tough. Creating stuff that I like and am confident to put out there always takes a long time, and I never fail to underestimate how long things are going to take. That doesn’t help to maintain healthy hours; I think this is just part of the ups and downs of being freelance though – you can have long down periods. 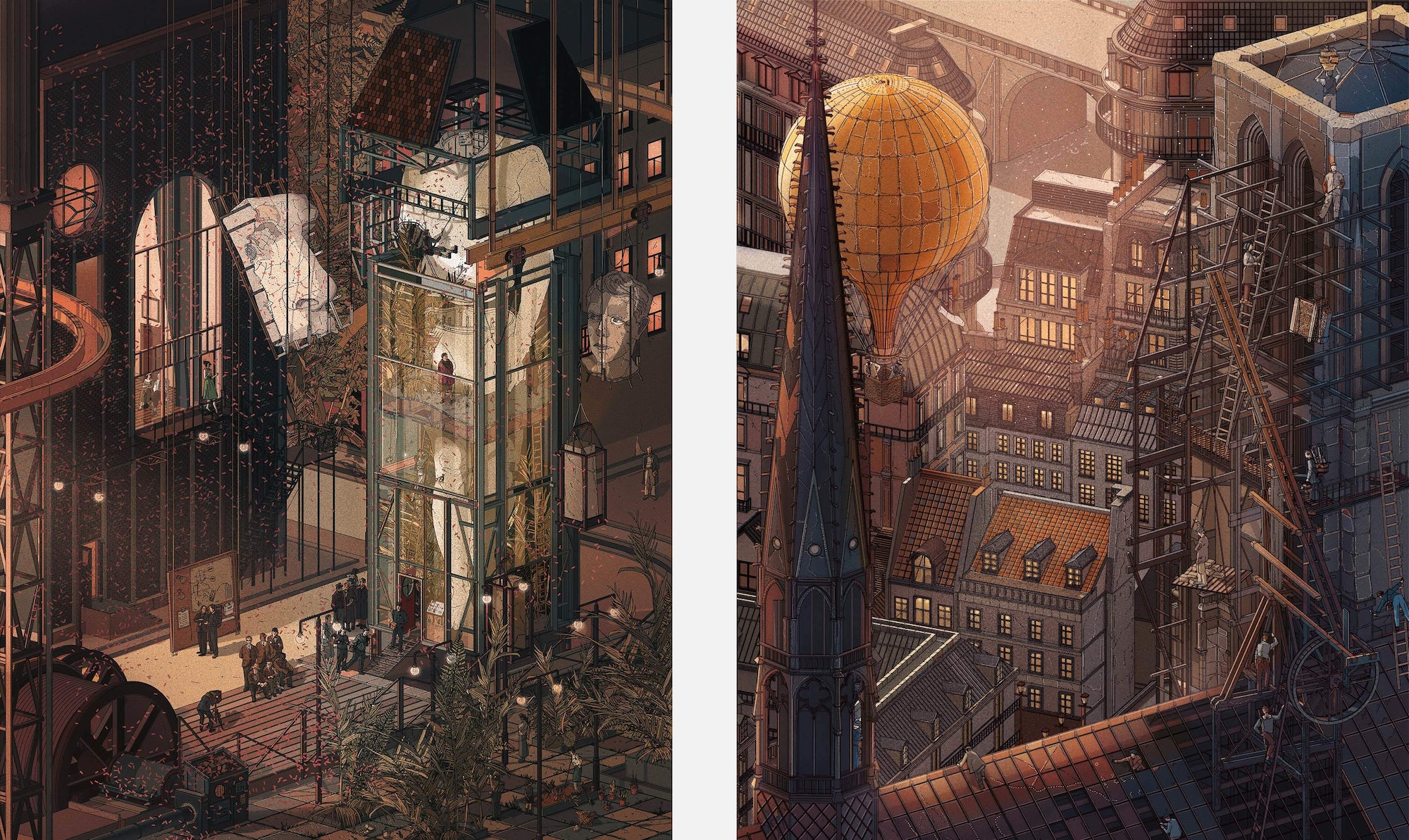 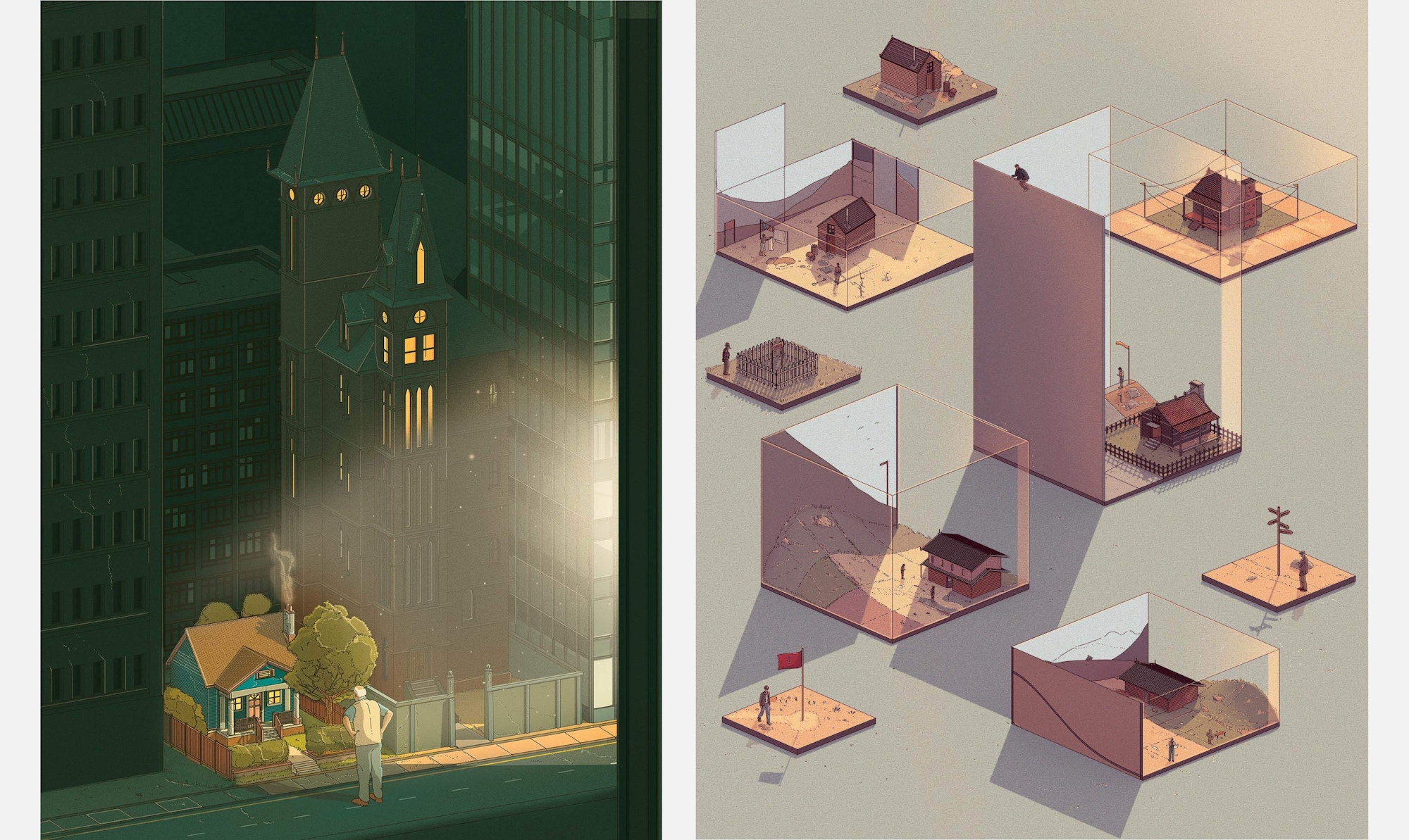 What has been the most exciting project of the last twelve months?
Firstly, working with Bao to illustrate a map of their local haunts in London Fitzrovia was a real challenge and pleasure. It was the biggest piece I’ve been able to do so far. There was so much room for detail, while wanting to maintain the [visual] language and mood I had already experimented with in previous images. And also working with The Atlantic Rethink Team on a project for WeWork. This was the longest project I have ever worked on and it was exciting to see several different ideas come together into one project.

“Think about things more abstractly. It can result in a more interesting illustration.”

What skills would you say are essential to your job?
Being able to distill an idea down to some basic components. Often, it can feel like the thing you are trying to draw is too complex or boring, and there isn’t a way in – but if you think about it more abstractly and build in a metaphor, it can ease things up and result in a more interesting illustration.

What do you like about working in the area of the UK you’re based in?
London is a great place to be an illustrator mainly because you feel like you are in among it all. Illustration fairs like ELCAF (East London Comic Books and Arts Festival) mean that you are part of a huge network, even if you don’t realise it at first. Being able to attend talks regularly and chat to other creatives are also benefits. 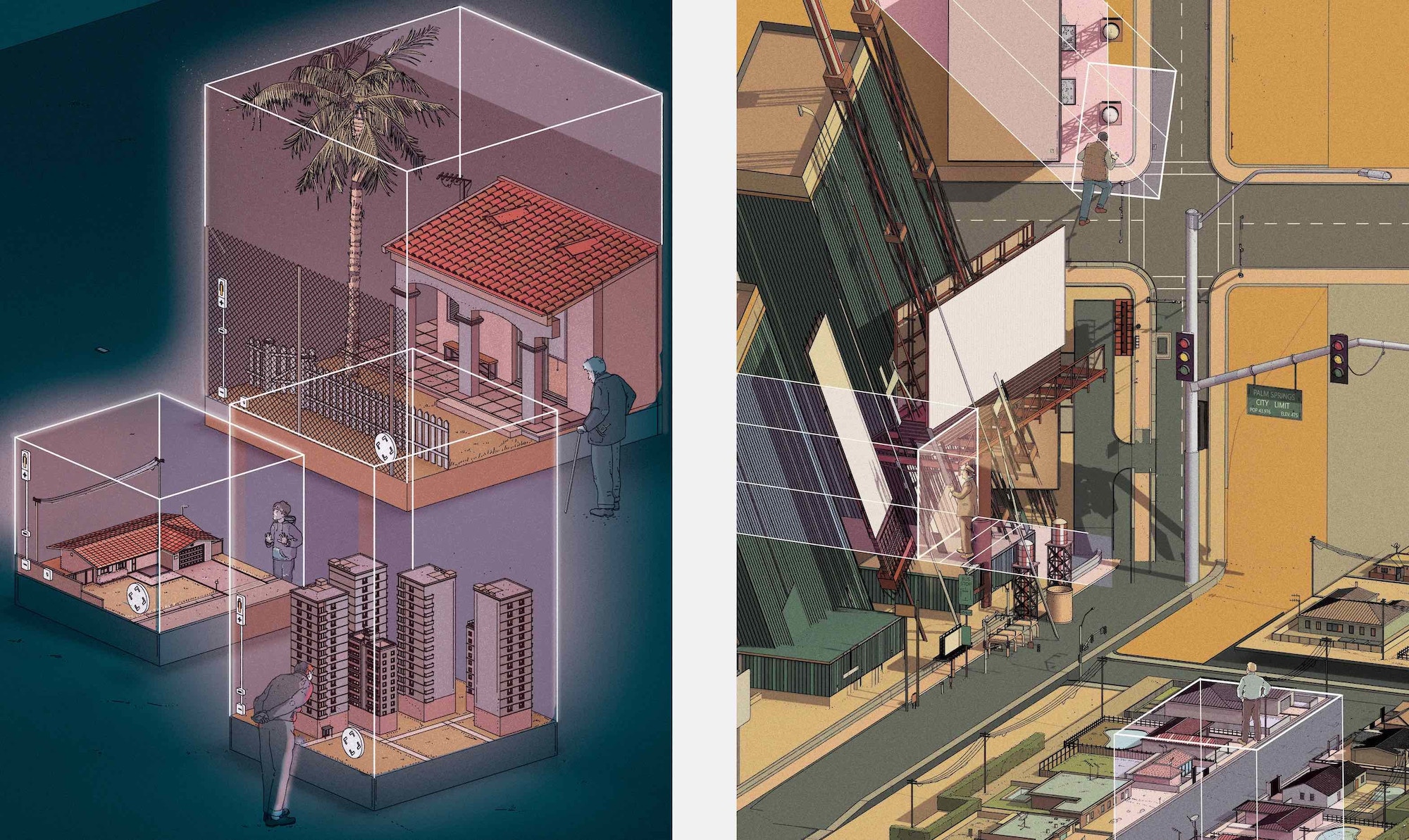 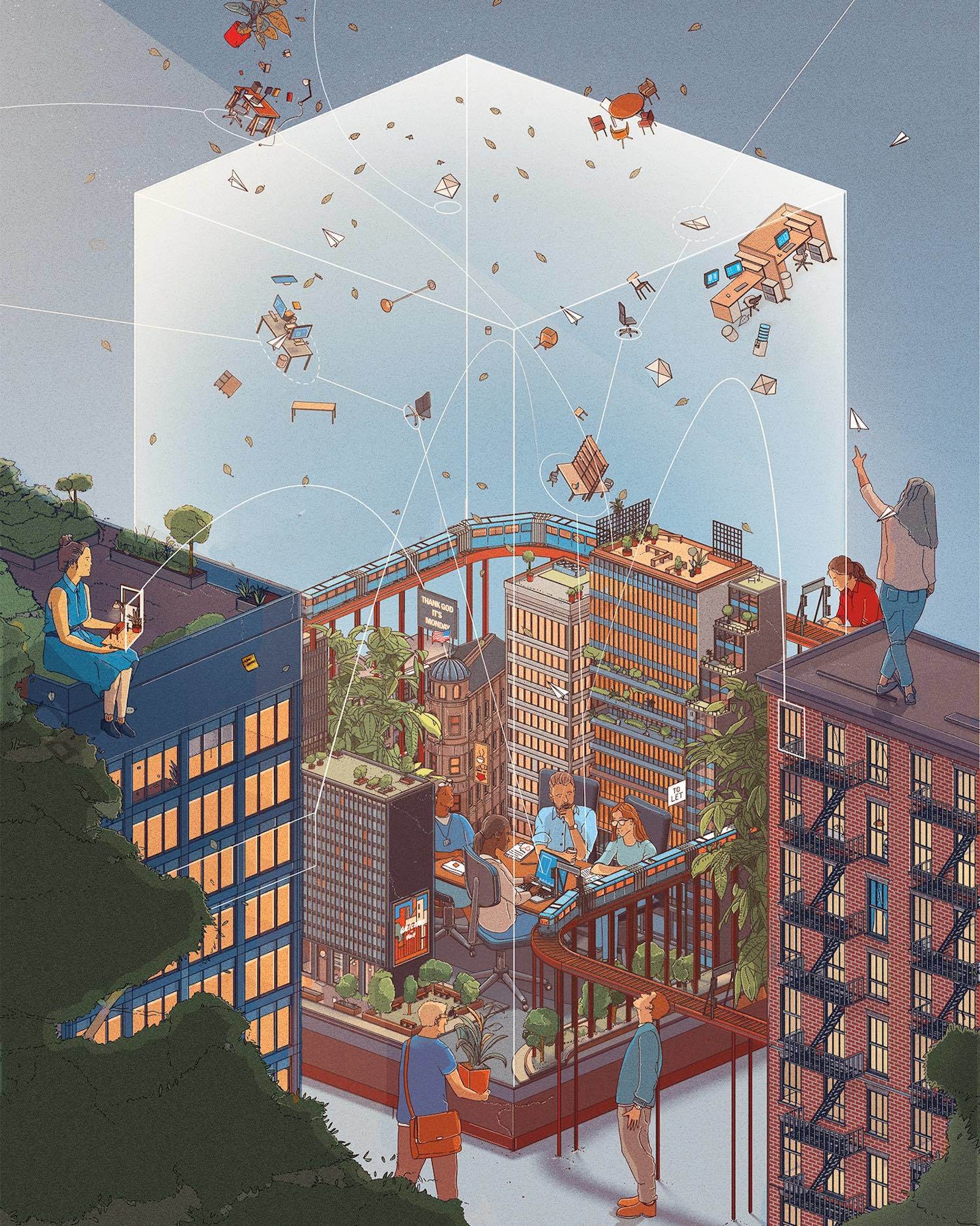 Work for WeWork with The Atlantic

Are you currently working on any personal projects?
Yes, they are pretty experimental at the moment, though. I'm working on various sketches, interactive drawings and animations to try and bring more layers to the drawings. Getting this new skill under my belt is only possible in personal projects, as it’s a real testing process to get stuff right. Hopefully this will come together at some point as a mini drawing series!

What tools do you use most for your work?
My laptop, a big screen and Wacom tablet. I rely on 3D modelling for most of the most complex drawing in Rhino 3D and the rest of the process is done in Adobe Photoshop and Illustrator. I also always have a sketchbook on hand, so I can draw thumbnails and write down to-do lists.

Is there a resource that has particularly helped you?
Film concept work in general has always been my go-to for inspiration. Any concept art book that shows the behind-the-scenes of your favourite films is a really good resource. The skills that concept artists have are incredible, and it’s rare you get to have look behind the curtain of an entire team’s work that’s all focused on one output.

How do you think your upbringing influenced your choice of career?
I was brought up on LEGO, K’Nex and drawing. I wanted to play with draw Star Wars spaceships and read Harry Potter for the rest of my life.

My parents were so encouraging of art at school. Architecture came out of the blue really, and I was extremely lucky to go to such an interesting school (The Bartlett School of Architecture, London). It has such a broad output, from architectural research and testing at 1-to-1 scale, all the way to crazy world building drawings – this was the stuff that really drew me in and appealed to the Lego-obsessed boy.

“I began to get illustration work and take personal drawing projects more seriously as a creative outlet.” 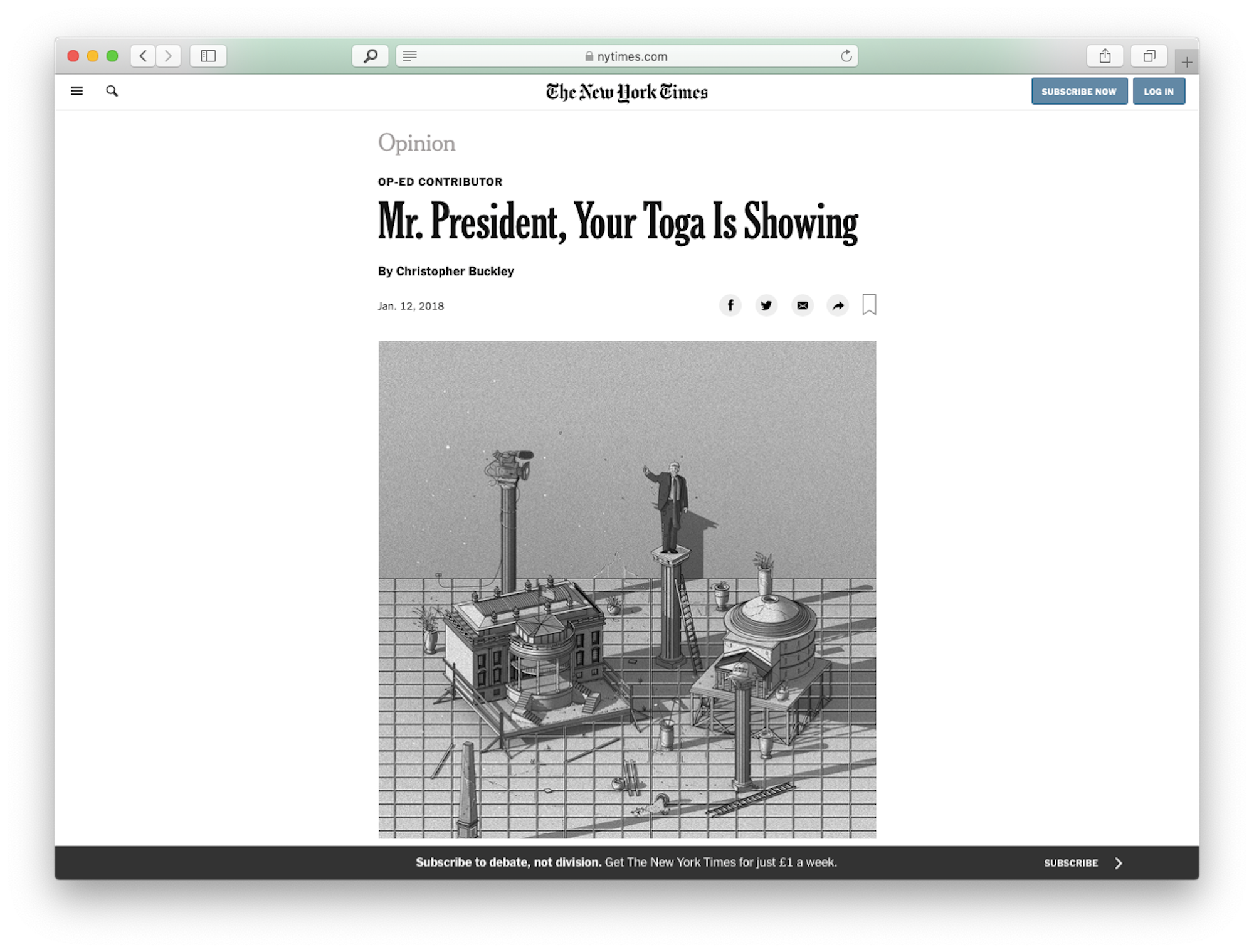 Work for The New York Times

All of the skills I have at this point have their foundation in architecture school. I was exposed to new software and developed a new set of digital skills that took over from what had previously only been analogue drawing skills.

3D modelling is the industry norm in architecture, and I think that really helped develop the way I think about composition and putting complex images together. More generally, I think the role of world building and the interest in uncovering details through drawing has completely come from architecture and continues to be something I do today.

After graduating (or first starting out), what were your initial steps?
It took me a while to get into illustration. As an architecture graduate I went straight into working in practice for two years. I had my eye on my masters degree, as that is the natural progression in architecture – we are lucky enough to postpone that freshly-graduated panic for a couple of years! But within that two years, I began to get illustration work and take personal drawing projects more seriously as a creative outlet. That two-year experience in the industry of architecture really crystallised for me what I wanted to do.

“The online ‘hustle’ culture of constant work is dangerous for people just starting out.”

Would you say you ever experienced a lucky break?
For sure, I’ve been really lucky – a couple of years ago an image of some of my risograph prints posted by Hato Press gave me a more of an audience for my work online. From there, Lucy Bourton at It's Nice That wrote a short piece about my work.

A result from that article was a commission from [online magazine] Pitchfork that kicked things off. They asked twelve artists and illustrators to draw a piece for each song from [Radiohead album] OK Computer. This was my first serious commission, and the first time I had done a piece of work that was completely for someone else. I think this is testament to how much luck plays a role in getting your first bits of work.

What’s been your biggest challenge along the way?
Time keeping and saying no to stuff. It’s a cliché, but when you start out you feel like you have to say yes to everything you are offered. Whilst this helps to get the exposure and opportunities you want, I’ve realised you need to have time to breath. The online ‘hustle’ culture of constant work is unjustified and dangerous for people just starting out, and who think that’s the only way to get stuff done. 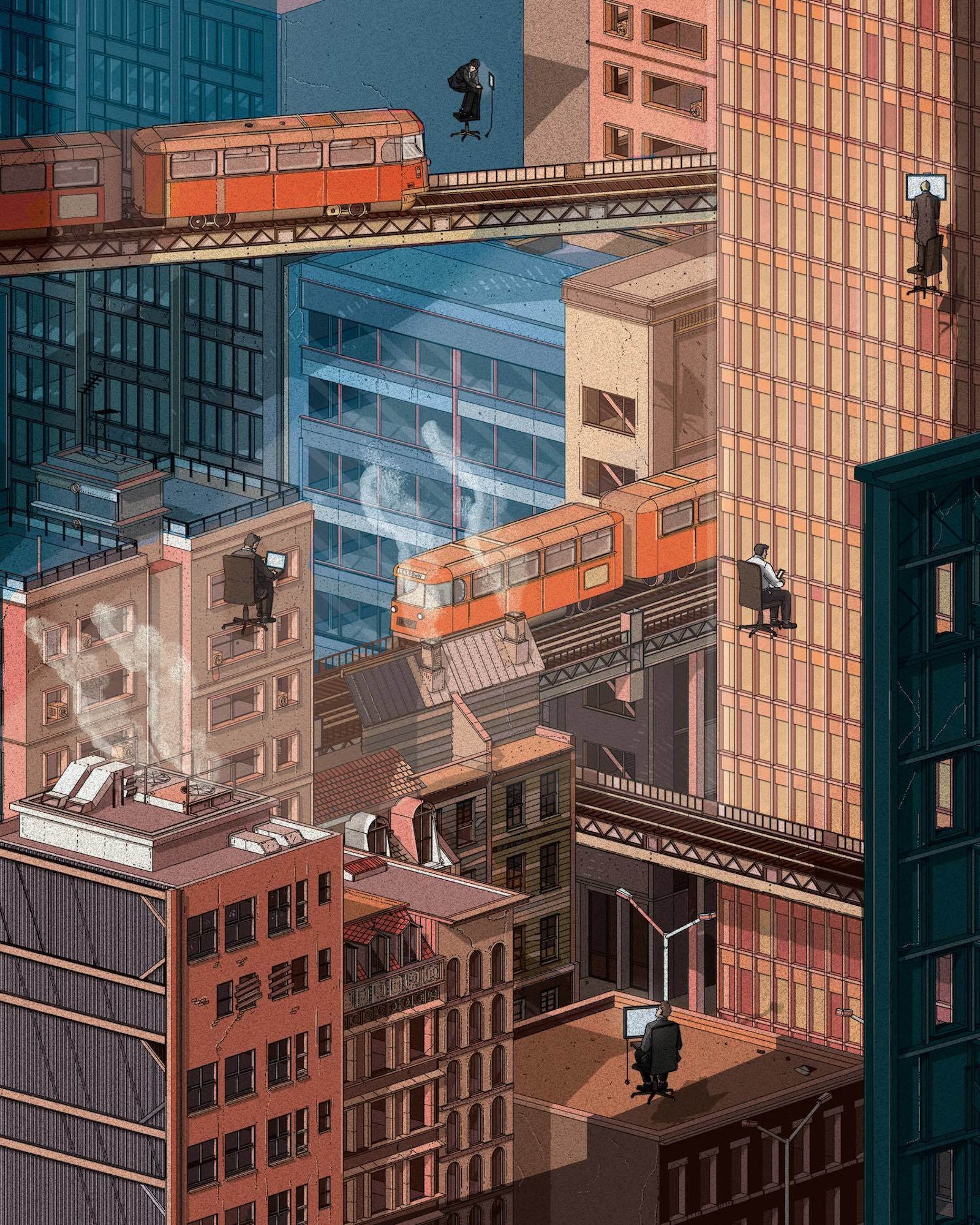 What would you like to do next?
I would love to work on film or game concept illustrations – it would be nice to work with a team of people on a large project like that. The dream is to have some work in one of the concept art books that I like so much.

What advice would you give to an emerging creative wanting to get into the same line of work?
Take your time to find out what you really want to do by doing personal projects. It’s easy to get suckered into approaching work in a way you aren’t passionate about, because of the way you think an industry works or what is popular.

Personal projects let you exercise your skills in your own time. It’s also helpful to give yourself a goal as an output, rather than limiting experiments to the back page of your sketchbook or that dark corner of your desktop. So much of my favourite work from creatives are personal projects that they work on in the background – they get to really show off what they can do, stretch themselves and be just a bit self-indulgent.

Illustration ain’t no hobby: Handsome Frank on saying no to unpaid work

Illustrators: here’s why it’s worth learning to animate

100 student, graduate and emerging makers to buy from this festive season

Kyra TV creative director Diogo Lopes: “I had no idea that I could be doing this”

Sign painter Chris Mackenzie-Gray is leaving his mark across England