Over 50 years since the original film, later this month, Walt Disney and P.L. Travers’ Mary Poppins returns to the silver screen. Released in 1964, the first film was known in part for its then-revolutionary chalk painting scenes that saw human actors play alongside animated characters. The upcoming sequel, Mary Poppins Returns similarly transports a new cast into a cartoon world in a new, 2D animated sequence – dancing penguins and all.

Due for release later this month, we went behind-the scenes to speak to animation supervisor Jim Capobianco to find out how they created the ambitious sequence. Having previously worked as a story artist on films including The Lion King, Finding Nemo, as well as writing the original screenplay for Ratatouille, here Jim talks through some of the team's design inspirations and storyboarding process that brought the sequence to life.

I was brought onto the film by [director] Rob Marshall because of the the 2D animation work I had done at Pixar and Disney. Along with a team of story artists assembled by producer Jonas Rivera from Pixar, we met with Rob to have a brain storm session.

At that point, they were working with an undeveloped sequence written by screenwriter Dave McGee. So they brought me on to visualise it and make it into an animated sequence. Eventually it evolved into a section involving a music hall, a carriage ride and a chase.

The "Jolly Holiday" sequence from the original Mary Poppins

In our first meeting with Rob, we didn’t know how they were going to make this; whether it would be in 2D or CG. From the get go, he knew that he needed it to feel as close to the original as he could, but he wasn't sure how everybody would respond to that direction.

We watched Jolly Holiday [an animated sequence from the first Mary Poppins film] and he said, “I don't know if this is crazy, but what if we did the sequence in this sort of ‘flatter’ style?” I said, “Yes! We have to do it this way. 2D animation, that's it.” And when [composer] Mark Shaiman played us a demo of the songs from the sequence, I just thought, “Oh my god, this is perfect.”

Rob wanted it to connect to the original film, but he also wanted to make sure we weren't trying to repeat it. There was a moment, actually, where we went around the table of creatives and voted on whether the penguins [from the original film] should be in the sequence. It was pretty unanimous decision to put them back in. The penguins from the 1964 film 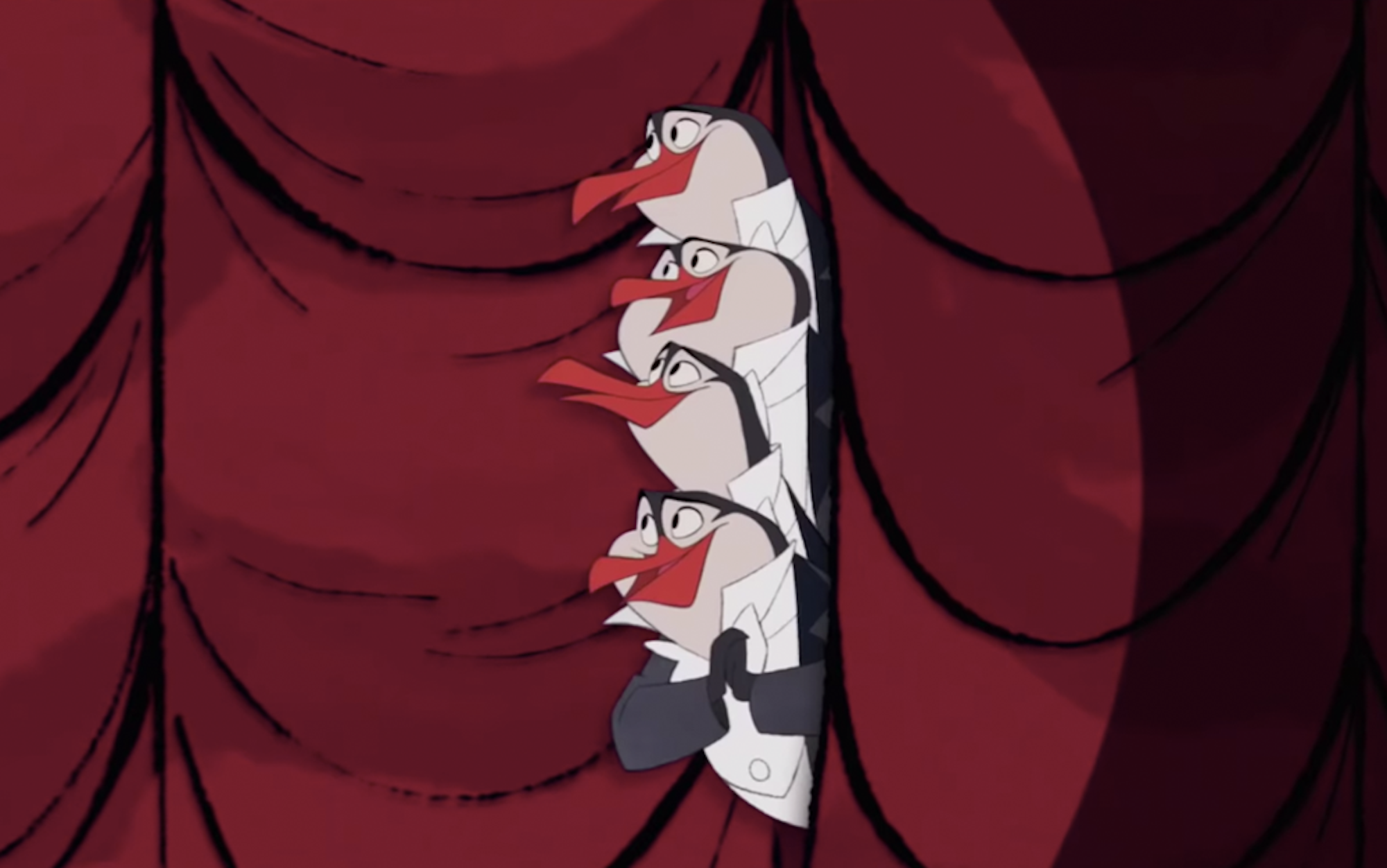 With Mary Poppins Returns, we had a great foundation in the form of a script by Dave McGee. And I knew they knew they wanted to do something with a Royal Doulton bowl, [a type of porcelain bowl, see image below] which would transport the characters into this cartoon world.

We had to work out how they would get there and what that world would look like. One thing that helped us with the design was looking at the bowls themselves. A lot of bowls have this great line work that was very reminiscent of the illustrator Ronald Searle's work.

“Start with what you know. Then you begin to find elements which give you a sense of the environment.”

There was a period in the 1960s where the filmmakers behind Mary Poppins, The Aristocrats, and The Jungle Book, were all looking at Searle's work; 101 Dalmatians in particular is very much inspired by his illustrations. So our character designer, James Woods, designed all the characters with this kind of Searle-meets-Disney look that just worked perfectly.

It helps to start with what you know, so you can limit your choices down. In our case, we knew it started with a Doulton bowl. Our production designer, Jeff Turley discovered this crackling on the surface of porcelain, called 'crazing', which we used on the flooring. Then you begin to find these elements which give you a sense of the environment, and layering; we knew that the sound team would put in a sort of tinkling sound, for example. Later on there is a chase sequence, you'll also see that the moon isn't actually the moon. It's actually the sheen on the bowl surface, hitting some light in the room that's creating it. 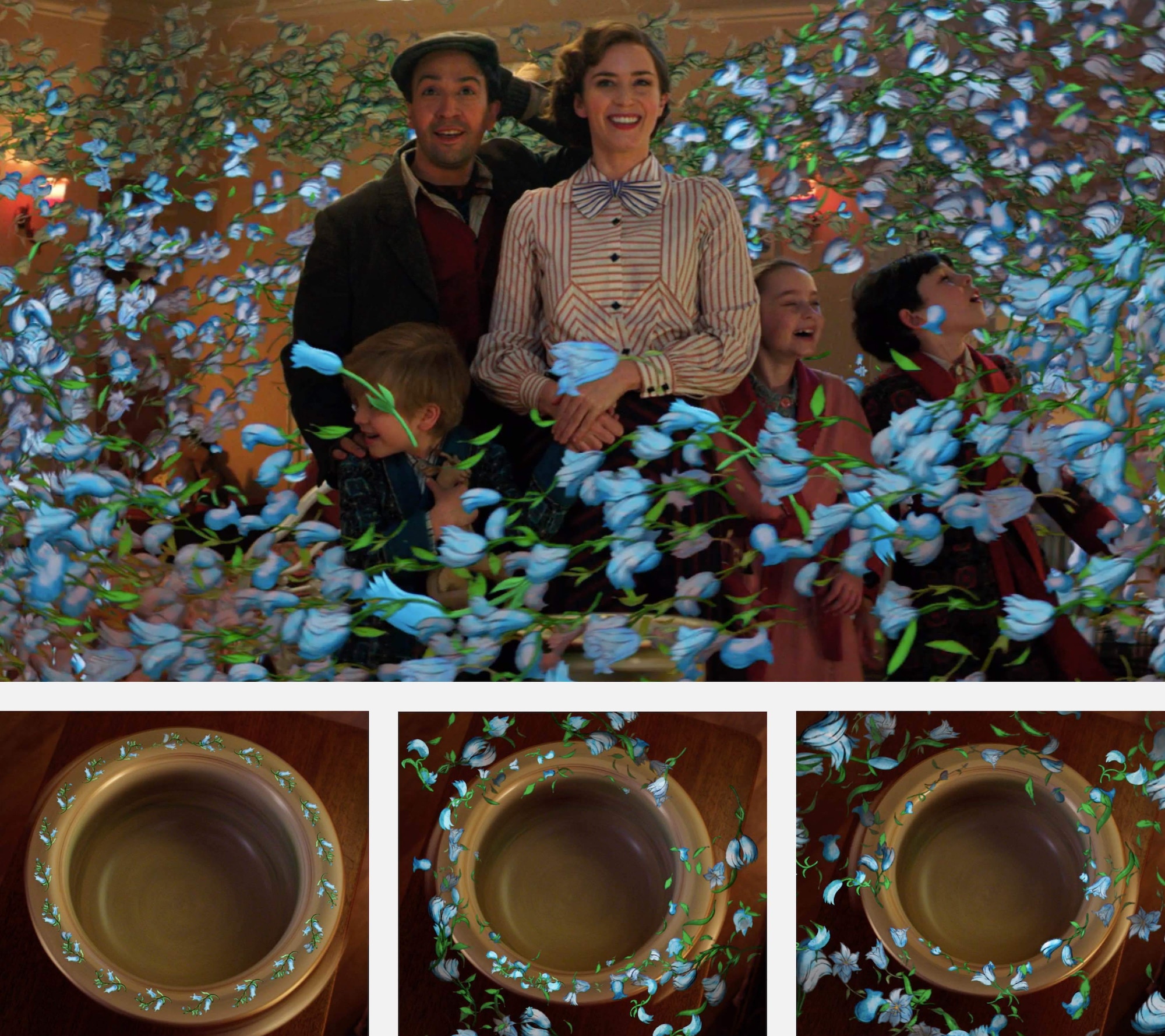 The storyboard is an extension of the writing; I've always felt that way. It’s like visually writing, and it has to have this organic sense about it. In the old Walt Disney days, films like Dumbo, and Pinocchio weren’t scripted; they were all developed through storyboards. They were only scripted to record the dialogue they wrote down.

A script is a weak document, in the sense that it is a literary, not visual medium, and since animation is totally grown from nothing, you need to get to the visuals as soon as you can, to start to see what you have. You need those visual handholds to develop the film. There's something about the entertainment and character development that comes as you draw them out, which can get lost in the script.

To me, a good storyboard clearly tells the story through the characters, one idea at a time. Everybody gets what's happening; there’s no ambiguity about the way anything is staged. For feature animation, it’s about conveying the story of the character. It's focused on the idea and not necessarily the camera work or any of the other processes that came later down the line.

“Animation is totally grown from nothing, you need to get to the visuals as soon as you can.” Director Rob Marshall talking through some of the storyboards on set

Mary Poppins Returns was a unique storyboarding experience for me. It was much more of a back and forth between us all. The carriage and chase sections were storyboarded traditionally: we had an outline and a script, which we could then linearly match with the songs. But Rob was very particular about how he wanted to choreograph the music hall section with the penguins. He has a traditional way of assembling a musical sequence, so he choreographed it with the penguins as live action dancers and we filmed the rehearsals.

Then my storyboard team, including our editor, Tom Christopher and Wyatt Smith, who was the editor of the movie, took the footage, recut it, and storyboarded the animation pieces around that. They could then execute what we storyboarded with the actors. 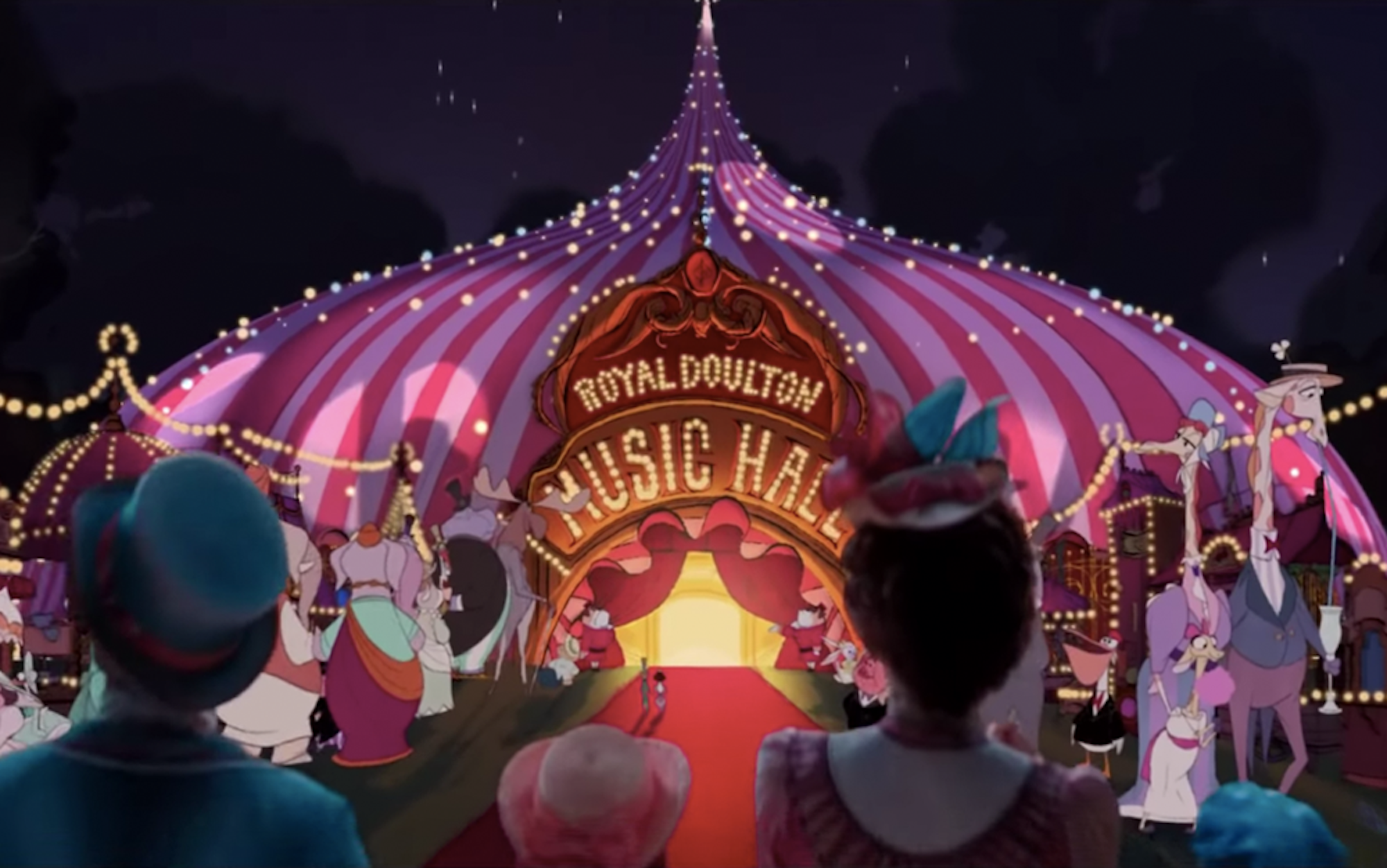 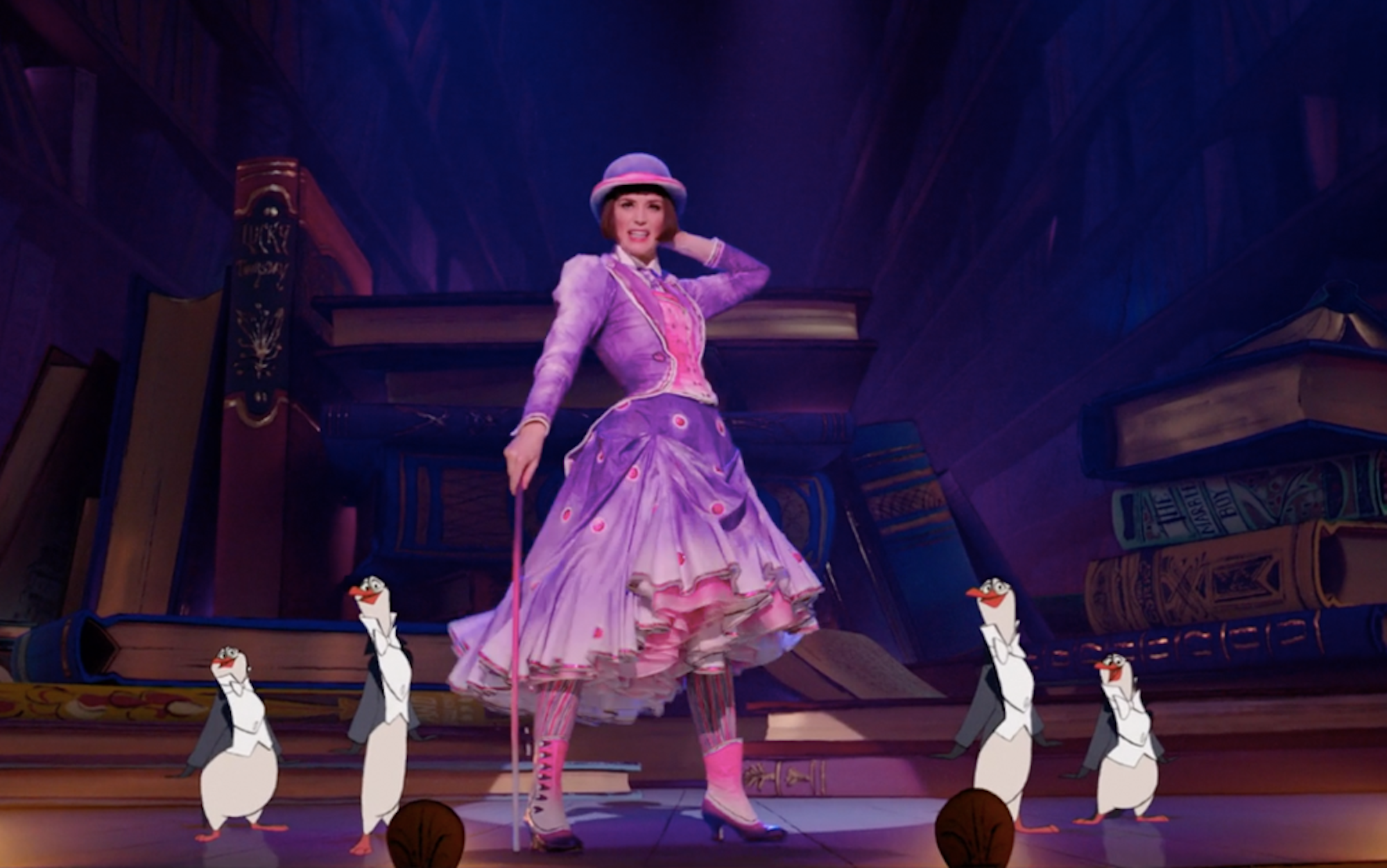 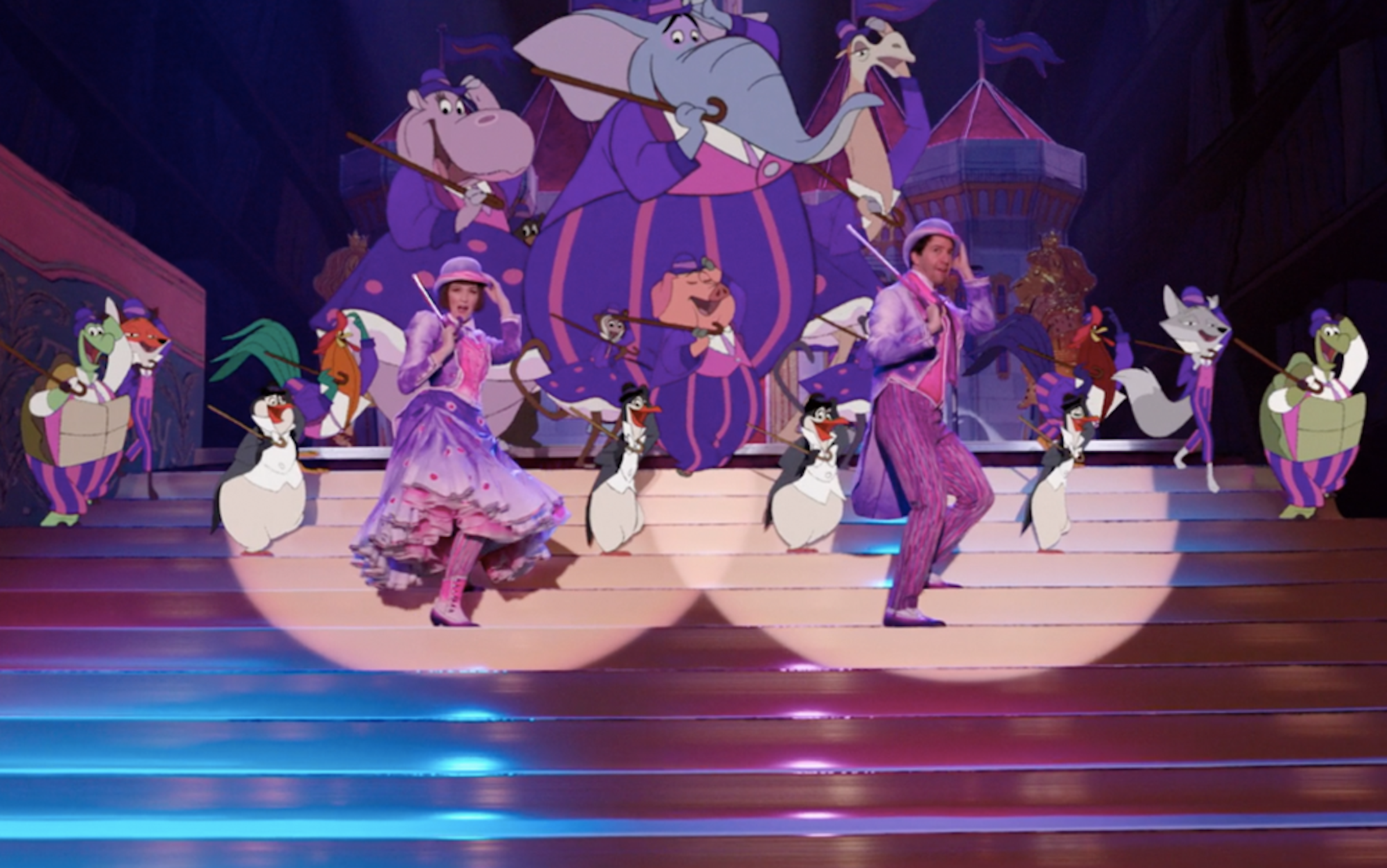 When I first did the animated sequence, it was done in very broad strokes – what we call a beat board pass – where it's mainly hitting the major beats of the story. You're not trying to achieve full continuity. Myself and story artists James Baker and Ovi Nedelcu brought it down to Disney and pitched to Rob and the creative team, including writer David McGee, production designers Jeff Turley and John Myhre and composer Marc Shaiman.

“I actually pitched the sequence with an umbrella, not a pitch stick!”

I physically pinned up all the storyboards, and actually pitched the sequence with an umbrella, not a pitch stick! Today, with digital technology, it's a bit more siloed, with story artists pitching from their computer instead of pinning the drawings up on boards as a theatre setting. To me, that's something that's been lost. So it was nice to be able to go back to it.

I had this idea that Jack [a lamplighter, played by Lin-Manuel Miranda] would run up some books. They loved the idea, but said they might need more time [in the music]. So then Rob would say, "Mark, get on the piano." And we would adjust the music to the ideas, redraw stuff as it evolved and Dave, the writer, would rework it back into the script.

Lin-Manuel Miranda, playing lamplighter Jack, standing on a stack of books in a scene devised by Jim

I always consider directing a bit like being a traffic cop; you’re trying to direct everybody to go certain ways. And sometimes you have to stop people, but it's mainly just trying to keep the flow going. We evolved the sequences that way, live, together.

It was really special because I feel like it was as close to how the original Mary Poppins was developed, with Walt [Disney] and [music and lyrics duo] the Sherman brothers [Richard and Robert Sherman] as you can get. It was really a window into that time.

“We really tried to find opportunities where we could connect the characters.”

We looked at Who Framed Roger Rabbit, which a couple of our animators, Uley Meyer and James Baxter, actually worked on. We learned that, to make the animated world and live action world feel connected, the live action characters needed to interact with the animated ones. That was one of the ways to really cement the two worlds together. And also making sure their eye-lines were connected.

So we really tried to find opportunities where we could connect the characters. In one section, we have an [animated] monkey jumping down on a hat worn by Jack [a lamplighter, played by Lin Manuel-Miranda]. To simulate that, a green screen assistant whacked the hat with a pole that had a green screen ball on it. Lin was actually hit in the head, so it would be a shock for him, and he would duck. We wanted it to be a bit of a surprise, and not some kind of fakery.

An example of character-actor interaction

Co-ordinating Costumes with the Cartoon World

We did an early film test to figure out our technique, where we had this little boy dressed in a 1930s kind of newsboy outfit. But he just stuck out like a sore thumb among the cartoon background. He just did not feel integrated into the world at all. Looking at the original Jolly Holiday sequence, you'll see that their costumes are really garish. I realised that it was actually to better integrate them into the cartoon world.

When we talked to [costume designer] Sandy Powell about the costume design, we mentioned that this is how it should feel, and that we needed to caricature this. Then she took it to this other level, where she painted onto the costumes, which made the characters feel like they were actually part of the environment. It was so elegantly done, and it was just perfect. Rob Marshall on set, with some of the children in their painted costumes, designed by Sandy Powell 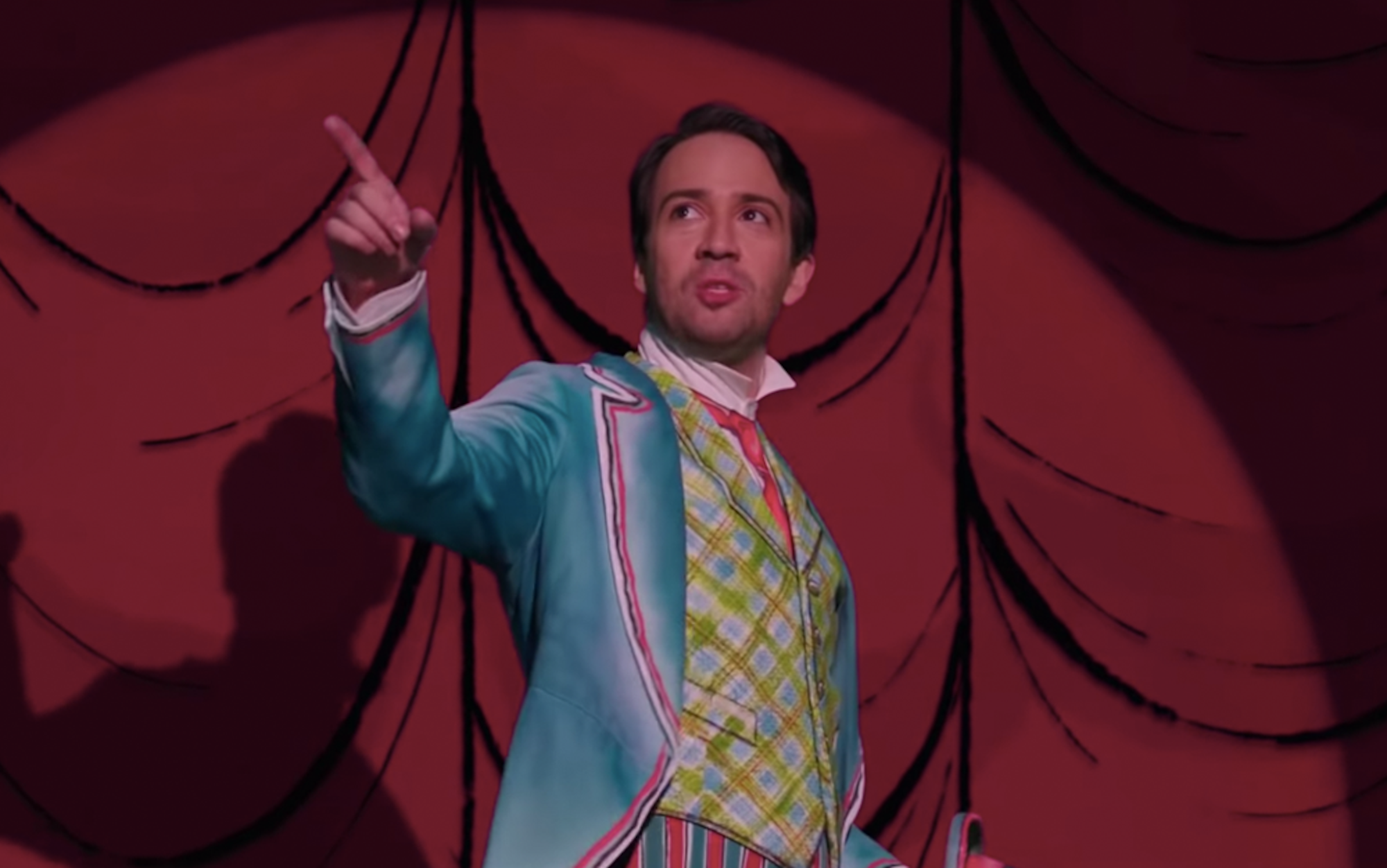 Reflecting on the Experience

All in all, working on Mary Poppins Returns was such an amazing experience. It's one of these rare films where from the beginning, you knew there was something special about it all.

From that first day with Rob, all the way through to production and shooting, you knew that everybody's heart was in the right spot – in relationship to the material, to the original film and to honouring it.

All images and videos © Disney.

How to design for meditation: Designer Anna Charity on developing the Headspace brand

How Toaster developed a Progressive Web App for the Natural History Museum, inspiring kids to get outside