Creative Lives — Kyra TV creative director Diogo Lopes: “I had no idea that I could be doing this”

It’s hard to keep up with Diogo Lopes’ whirlwind of projects and wide range of abilities. Between his work at production agency Kyra and a revolving set of personal endeavours – from photo books and films to growing a record label – it’s clear he has no intention of slowing down. “It might be because of my attention span, he explains, “but I like to work on different mediums and platforms at the same time.” Having previously worked at Vice, Boiler Room and Protein, the likes of Fendi, Adidas and UEFA make up a stellar client list. Today Diogo works primarily on short-form digital content – guiding his team to research, generate ideas and edit videos – across music, lifestyle and fashion. He tells us about his journey, from getting into filmmaking after moving to London from Portugal aged 12, to how he almost enrolled on a computer programming degree. 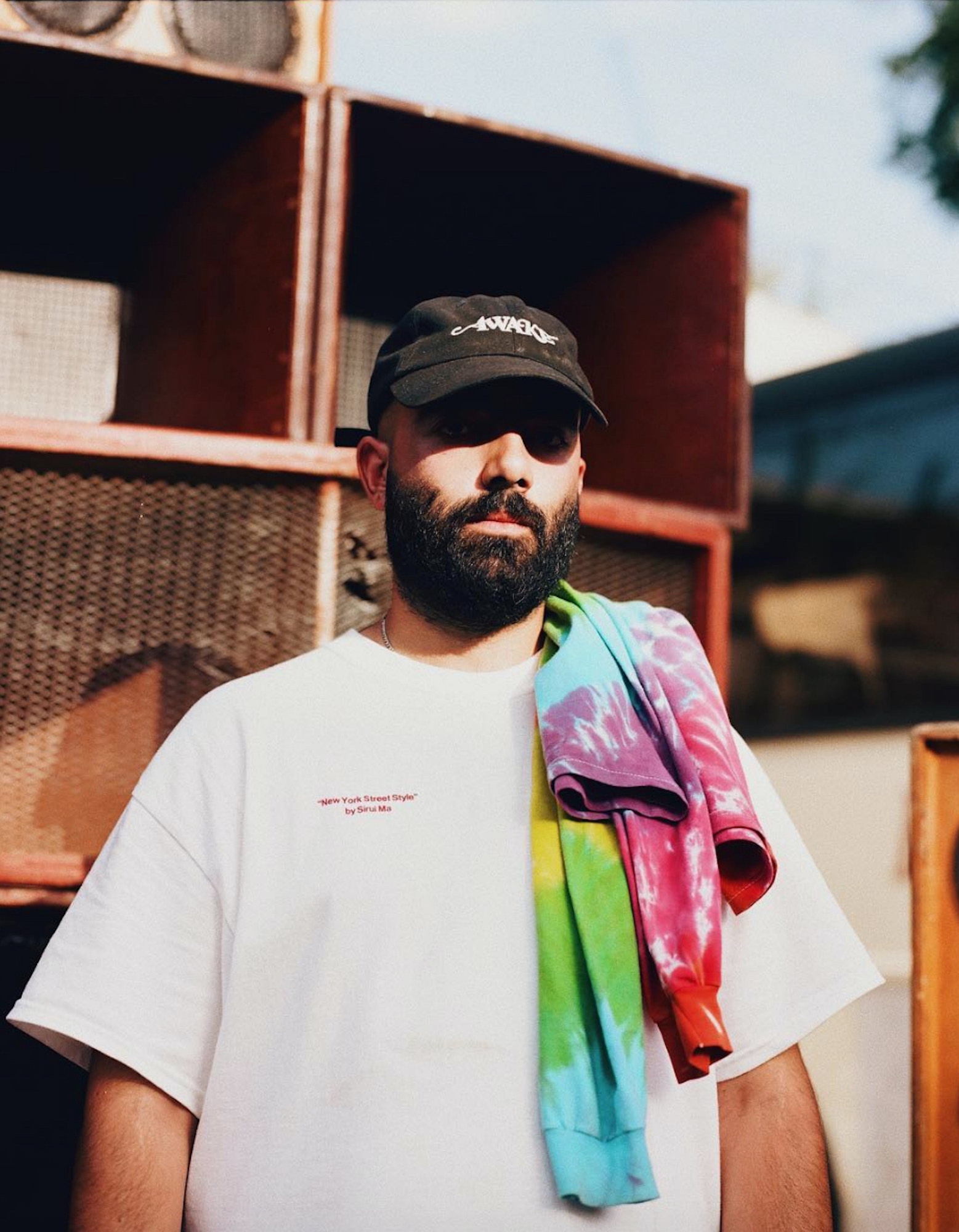 How would you describe your job?
It might be because of my attention span, but I like to work on different mediums and platforms at the same time, as that’s the most satisfying. Currently, I’m a creative director for a company called Kyra, working within the areas of creative direction, consultancy, video, photography, design, fashion, music, and events. I specialise in short form content for a variety of platforms, but mostly on Instagram.

Can you tell us more about Kyra?
Kyra is a mixture between a creative agency and production company. The company was started by the creators of the Dojo app. They were making content for the app, before being asked to create white-label content for brands, so they created Kyra for that purpose. This led to the YouTube show PAQ, resulting in brands approaching us to make content for them. Now we have two main outputs – both PAQ and the Navya YouTube show.

“It might be because of my attention span, but I like to work on different mediums and platforms at the same time.”

What does a typical working day look like?
It mostly takes place in our studio. Next to my desk there's a projects board with ideas. I get in at around 9am, and I go through these projects and write a daily to-do list in my notebook. Then I work on new boards, photo shoots, and strategies for the department and shows.

Currently there’s only four people on my team, so a lot of production work goes into my role: preparation for photo shoots, video shoots, brand collaborations, working on idea decks, planning with the social media manager. There’s often a lot of meetings, too.

Diogo went to Cape Town to document some artists in the local music scene with Boiler Room late last year.

What skills would you say are essential to your job?
Research. I’m constantly scrolling through Instagram. There are pages and people that I look at on a daily basis that can influence the look we have: photographers, art directors, set designs, and archived advertising.

Communication. Because the team is so small I have to be constantly talking to everyone and guiding them as to what needs to be done. I am on all the shoots that we do, directing videos, guiding the photographers, or just being there to talk to the talent – explaining why we're doing something, or why the lighting and set looks a certain way. That's actually a big part of what I do, and something that I've always thought was necessary for my job.

“As a producer in creative agencies, you’re the middle man to the client.”

Collaboration. As a producer in creative agencies, you’re the middle man to the client, director, photographer, DOP, make-up, talent and so forth. You’re the go-to person for most things related to that project. This means that part of my role is working collaboratively to generate ideas that move brands forward. It’s very satisfying to be able to work with so many people in different fields.

For Bone Soda in particular, the role is very collaborative. There’s only six of us, and it’s very much a passion project that we’re trying to turn into a profitable business. From events to brand activations, we’re very much all sharing ideas constantly and bringing it to people that can help us execute it if we can’t do it ourselves.

You recently made the jump from producer to creative director – can you tell us how this came about?
I worked in production for three or four years, and even during my first job, people saw that I could do something more than produce. I used production as the base-level of my work, and did more with the opportunities jobs gave me.

A lot of the creative for the videos I did at Boiler Room came from me; I would be writing creative mood boards, working with directors, musicians, and basically doing what a creative director would whilst also producing. That’s something I always really enjoyed. When I joined Kyra, I explained more about the work that I do outside my regular job, and I guess they took that gamble and believed in me to give me that job title.

A project with the Arts Council, created while at Boiler Room. Spending four days in India, Diogo ended up shooting most of this on his iPhone

Are you currently working on any personal projects?
I have many on the back burner. I have some photo series I want to publish, a couple of photo books to put together, and two short film scripts to develop.

I also freelance as a videographer when I the time, simply because I enjoy it and it takes me travelling. I just finished three episodes of a series with UEFA. I worked with a really good director, James Willis and production company, Bullion.

I started in videography when I was 14 or 15. I came to London from my homeland, Portugal, when I was 12, and there was a group of people who would make videos. It was a good way for me to make friends, as I found a way to help them out. I’d always be filming or in front of camera and helping editing.

I’m also working on a record label, that does consultancy and live events and shows. We recently went to Cape Town to do a big show with Slow Thai, and a mixture of local South African artists.

Diogo went to Argentina to document the country’s national team’s struggle to reach to World Cup. Freelance work for Copa 90.

What tools do you use most for your work?
iPhone, (it’s more essential than my Mac!), WhatsApp, Facebook Messenger, Photoshop, Keynote, Instagram, Apple Mail, Text Edit, Spotify. My Moleskine is also very essential for my to-do lists. I've tried Evernote and Notes and all these things, but nothing works as well as my book. I also use it also for sketching photo or video compositions and set designs.

My university studio space was basically like an online mood board – everything that I liked, I would print and put it up. I'd just stick things on the wall and create little compositions on the wall that would affect what I was doing. So that's what I'm trying to do now with the office space – I have a board next to my desk that I use to pin things up.

“I chose illustration [at uni], which allowed me to work on video, design, sculpture, installations and animations.” 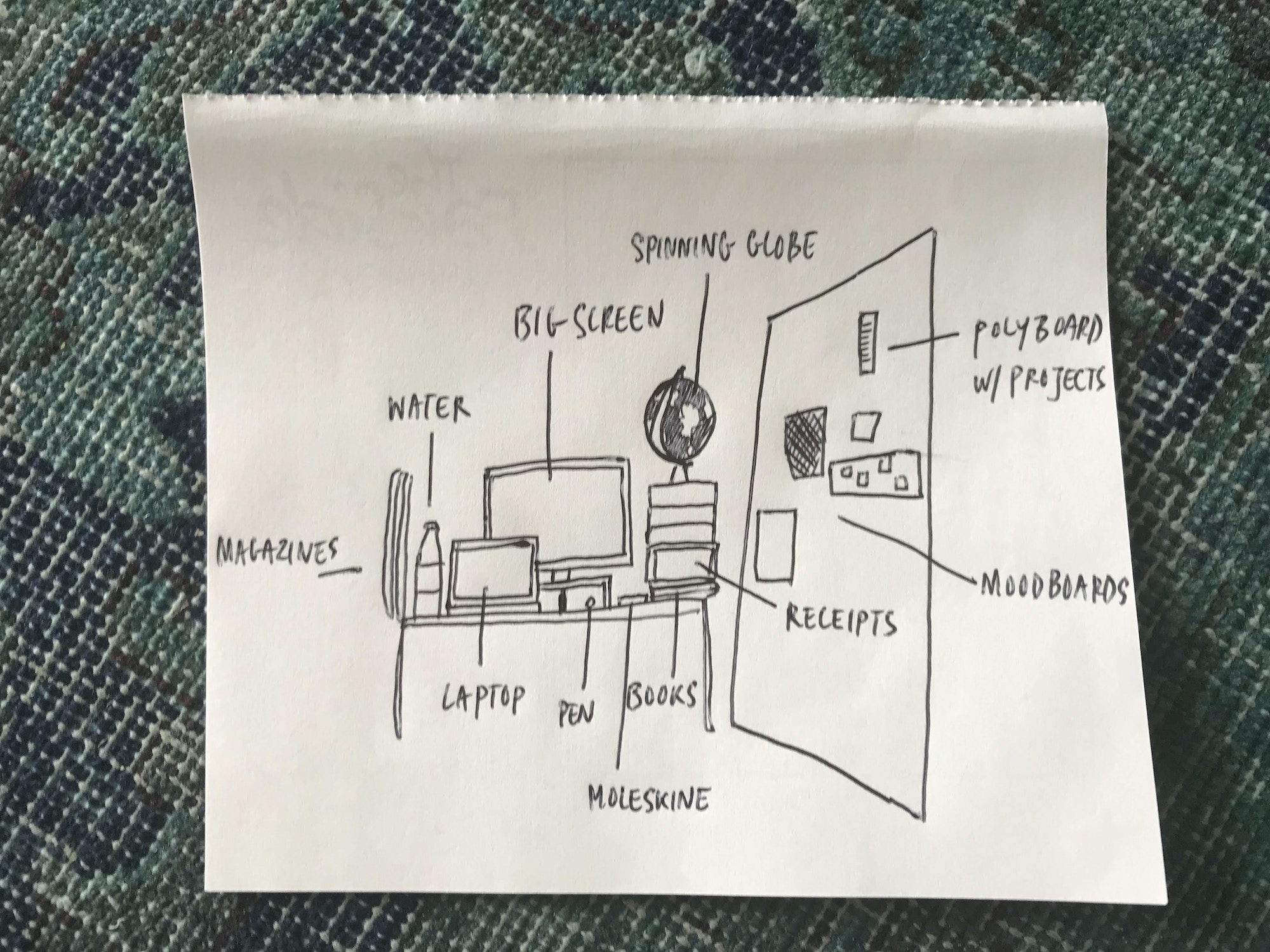 A sketch of Diogo's current workspace 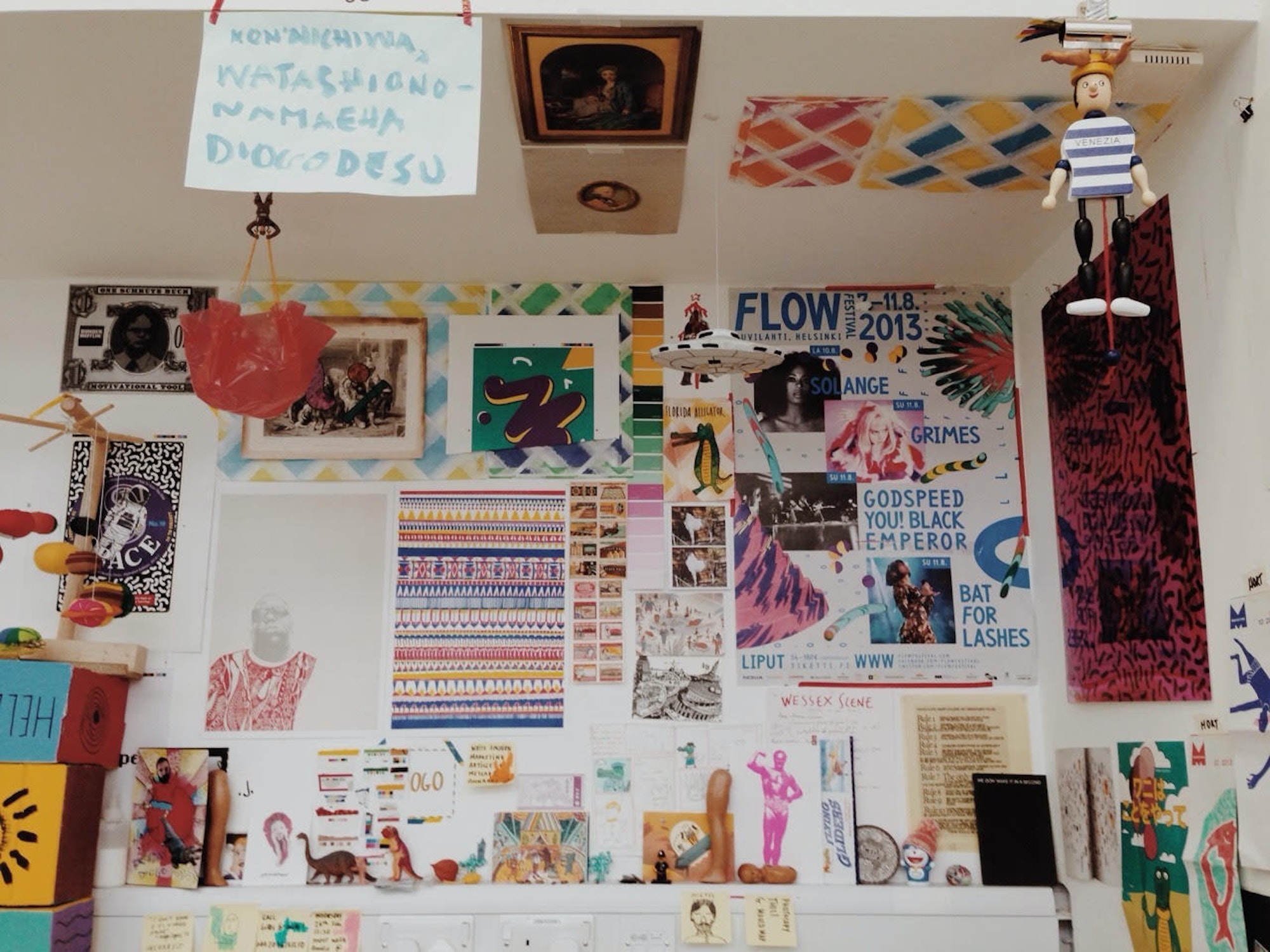 How would you describe your experience of university?
When I was choosing a degree, I knew that I liked computers, so I first applied for universities with courses like computer engineering and programming. A week before the deadline, I realised I didn’t want to be in front of a computer all the time, so I switched and enrolled on the graphic arts course at Winchester School of Art.

After the first semester, we had to pick a pathway. I chose illustration because the tutors were very open. It allowed me to work on video, design, illustration, sculpture, installations and animations. University was a time for me to learn what I liked and what I wanted. It opened my eyes to what I could do.

“Nobody really knows what they're doing. Everybody is just doing their best.”

What were your first steps after university?
I had no idea what I wanted to do. At an illustration fair at Somerset House, I saw Protein magazine for the first time, and [stage designer] Es Devlin was on the cover. I’d never seen a magazine like that, and I thought, “I would love to be on the front of this magazine.” It was interesting to see how someone who wasn’t necessarily famous could be on the cover for their creative work.

At our end of year show, a tutor asked me, “So what are you gonna do now?” I said, “I don’t know, but there’s this magazine that I would love to work at.” By sheer coincidence she was meeting them the next day, and I asked if I could come along. So I went with her, somehow I got interviewed on the spot, and the week after, I started an internship. And that’s when the production work started.

Was there anything in particular that helped your development at the start of your career?
As an intern at Protein I worked on the Adidas UK Instagram account. They would send small briefs, and I came up with ideas for images and videos. I’d make the sets, and edit the pictures, shoot and edit the video, and basically create content. It was crazy. I still really enjoy that variety and mixture of work. 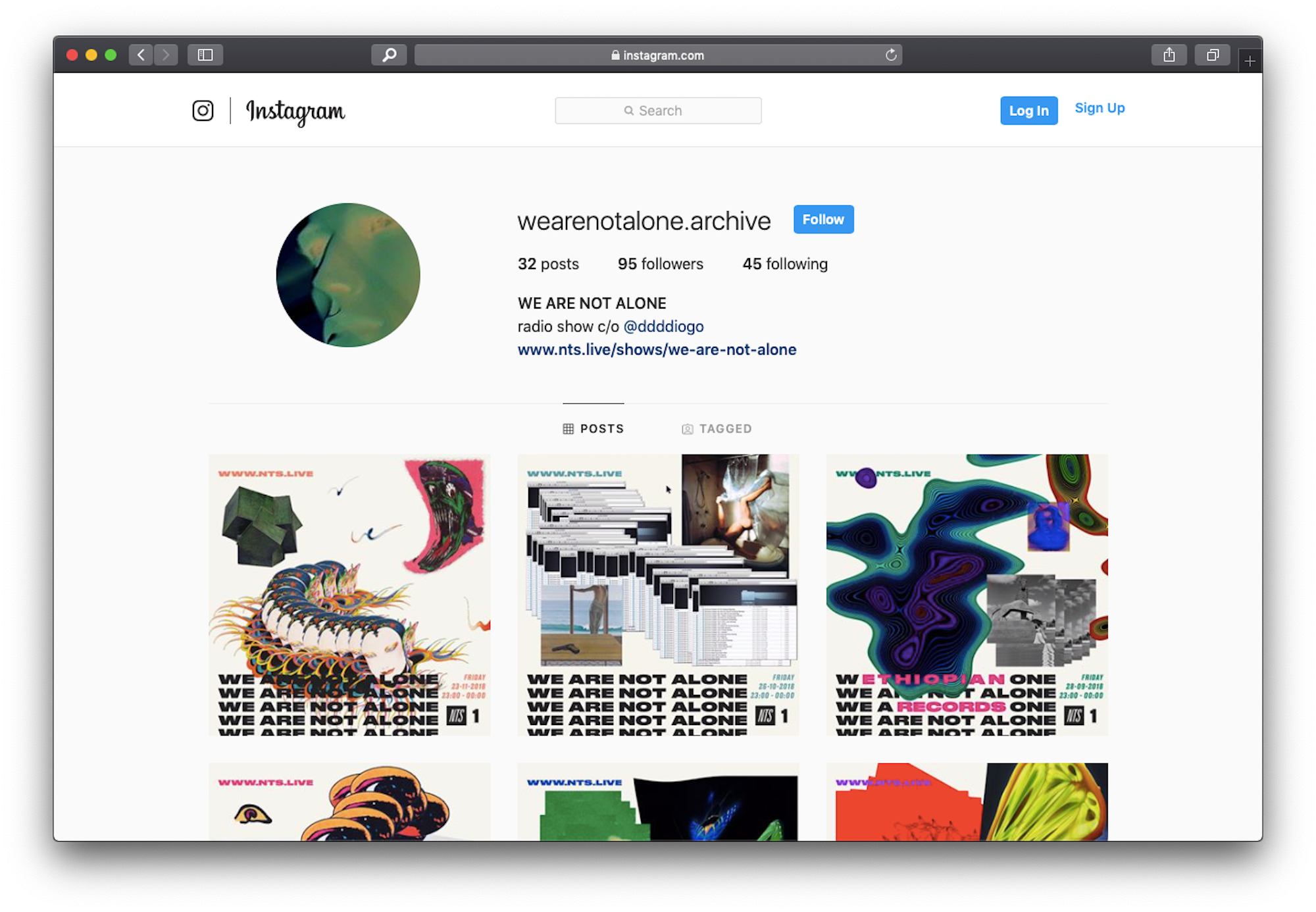 Diogo has been doing a radio show for nearly three years on NTS, as well as creating the flyers. This is an archive of all the posters.

What would you like to do next?
I’d like to continue doing a lot of things simultaneously. If I’m doing the same thing all the time, it becomes a stress or I get bored – this is why I also do work in music and freelance videography.

I’d like to continue doing projects I enjoy, and caring for them as much as I care for my job. I’ve always tried to stay inspired in my work; it’s just a way to keep myself happy.

What advice would you give to someone wanting to follow a similar path?
I think a lot of people say this, but nobody really knows what they're doing. Everybody is just kind of doing their best. Everybody has struggles, whether that’s in life or work.

Be prepared to learn a lot and work hard. And if something's not working out, change and do something else. Working hard is important because it makes you realise that effort is required to get a good result; don’t expect a lot from a little input.