First Hand — From signing with an agent at 16, to shooting for Nike at 17: What David Uzochukwu has learned so far

At just 17 years old, Austrian-born photographer David Uzochukwu was handpicked by artist FKA Twigs to shoot a major campaign for Nike in Mexico. It was a project that made headlines both for Twigs’ and David’s involvement, with particular focus on his tender age. While it was unusually young, David had in fact been growing a portfolio for over five years – winning competitions, global press and an agent by the age of 16. With a unique and striking style that combines clever post-production and intimate portraiture, he quickly became a photographer in high demand. But David also admits that the attention came with high pressure, and resulted in a year that saw him come close to “a complete breakdown”. Here he shares with us the journey, from picking up a camera at 11, to enrolling on a philosophy degree last year, and why personal work will always be the key to creative fulfilment. 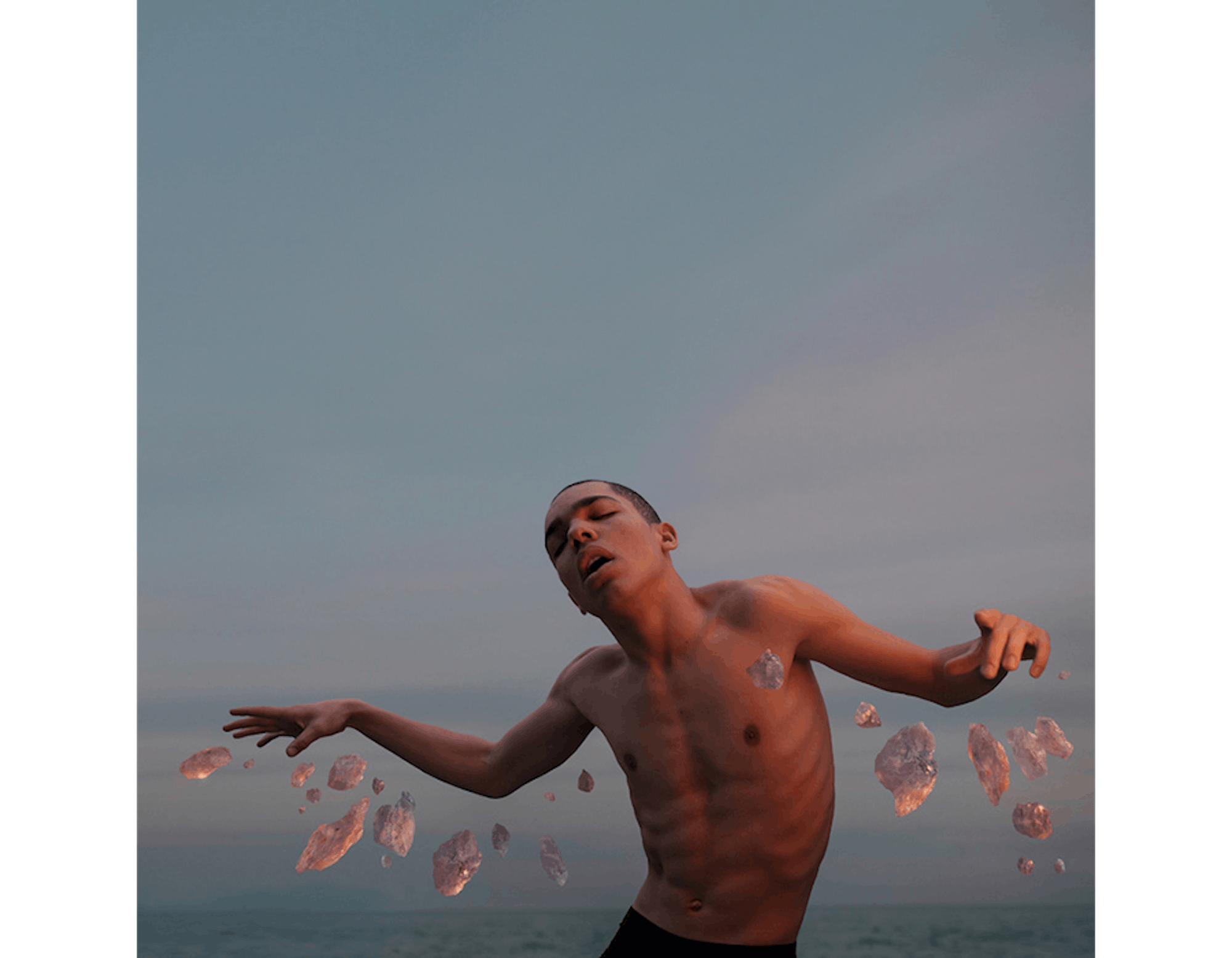 An early interest
I didn’t know I wanted to be a photographer growing up. I just developed it as a passion on the side and it grew, and then it snowballed. In the very beginning, around age 11, I was shooting on my phone, and then on my mother’s point and shoot. Then, after about a year or two, my mum got me my first small DSLR, which I was super-grateful for. I ended up working even before I graduated from high school, and just kept going.

I have no artists in the family, so I would find other artists online; which is how I got into the whole art and photography world. I was on Flickr, which is unfortunately kind of dead by now; I guess you can still find people on Instagram. But it was just a very nice photography community that was very safe, creative and young. That’s how I started out.

At the beginning I was mostly just looking at a lot of work, making work privately and putting it on an obscure blog. Then I started sharing it more widely around the age of 13, when I also started making self-portraits. My main platform was Flickr, then I used Tumblr as kind of a back-up. Eventually I also used Facebook, and Instagram came very, very late.

A year of break-throughs
One summer I set myself a project where I shot every day, so I made a lot of work. Right after that summer, I also started entering a bunch of contests and sent my stuff to magazines. Almost simultaneously I was selected as one of Flickr’s 20 Under 20, and Photographer of the Year by a Berlin start-up called EyeEm. I received a lot of press over the next six months, and after that I was spotted by my current agency Iconoclast Image in 2015, when I was 16. Things just took off from there.

“I ended up working even before I graduated from high school, and just kept going.”

In the first year with Iconoclast, we didn’t really do much, but I did feel ready. I had already been working beforehand and shooting musicians, and continued with my own work until we started shooting editorials. People began reaching out, and then things grew. Those first shoots were relatively small, but at the same time it was overwhelming, because I was used to shooting alone or in the company of one other person. So ten people felt like a lot, but after that it got bigger still. 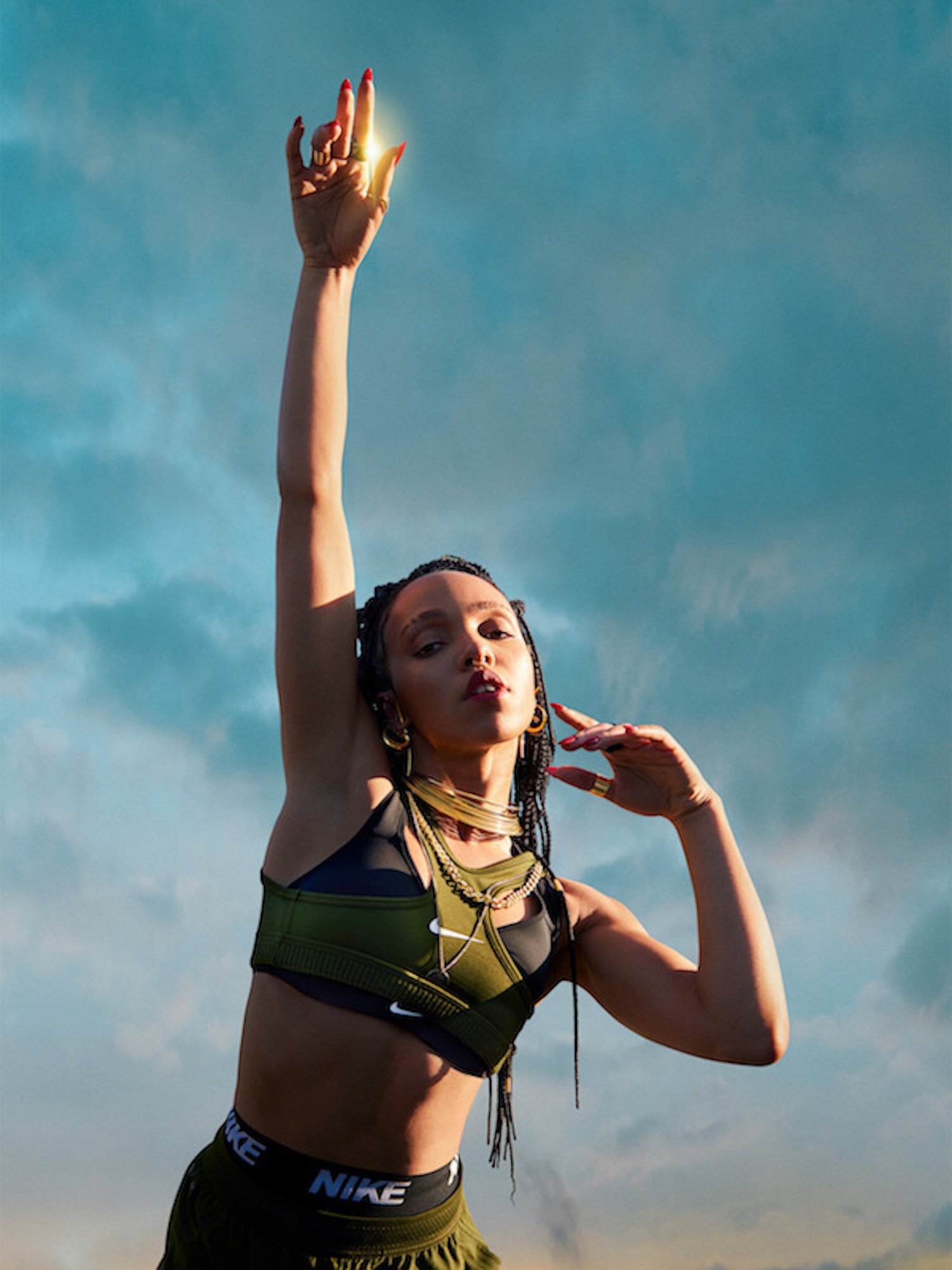 An image from the ‘Do You Believe in More?’ campaign, in collaboration with FKA Twigs, 2016

What I didn’t expect, when I first started working on commissions, is how much pre-production is involved. When I was working on my own I did it all myself – narrowing down an idea to make it happen in real life. But when you’re on a bigger job, all of a sudden there are so many people. It feels like half the time is spent on group calls, making sure everyone has the same vision, making decisions and making it happen, step by step. There’s a lot of talking, planning and scheming, but it makes the shoot and outcome that much sweeter.

I definitely wouldn’t want to be doing what I’m doing now without being represented. It’s a super-lucky position to be in, because instead of having to hustle, I slipped into this very coddled world, where jobs are presented to me. But the most effective thing is getting to work with producers; when someone takes over the production side you have more brain capacity to focus on the creative, and give it your best on the day of the shoot.

Acclimatising to new pressures
I get nervous every single time I’m about to do a shoot. But I think that’s a great thing, because then I know I care. To calm myself down, I’ll just sit in a corner, sketching out every image I want to take that day. Even if I know I won’t forget anything, the nerves are still there. But I do a lot of prep, so I can go in knowing exactly what I want and have it all mapped out. Then, over the course of the shoot, things can go wrong or right in a way you couldn’t have predicted.

I was still at school when I began shooting. Most jobs happened over the weekends, so I didn’t miss any classes. After school I took a year off, but I was actually almost too busy because – even though I’m selective, I took on so much work. Jobs tend to drag on for much longer than you anticipate, so there were points where I was close to a complete breakdown. I definitely learned a lot, but I’m still mastering a work-life balance.

“Jobs tend to drag on for much longer than you anticipate, so there were points where I was close to a complete breakdown.” 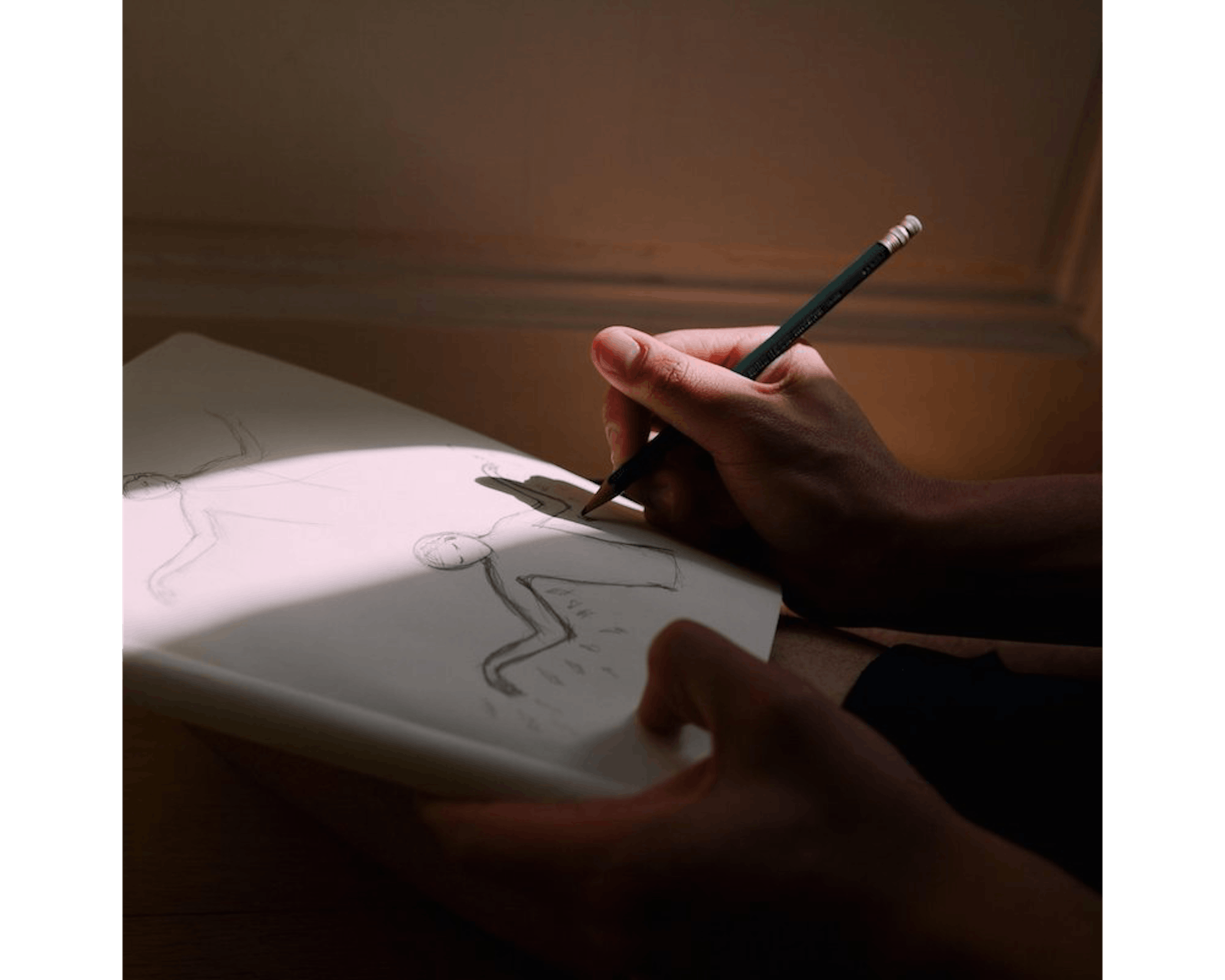 David sketching shots ahead of a photoshoot

Learning when to slow down
That year of working full-time was probably why I decided to go to university this year [to study philosophy], to forcibly calm myself down. There was just so much to do, and so little time. When you work with clients you always have to be able to take a step back, and balance their vision with yours. You’re having to deal with real-life budgets and work out what is actually possible. That can be really tough on someone who’s young, who just wants to make art and cool stuff. I never got into taking photos to make money; I just want to make beautiful things, so sometimes that was a hard compromise.

Turning down jobs became a gut feeling. I know my vision and my universe, so it’s just a matter of considering: Would I be up for sharing this work on my personal accounts? Is it something I could be proud of? Asking these questions makes it very easy to see if I can make it fit my world.

Self-learning over a degree
I always taught myself with online tutorials and trial and error. Since I had no connections to the creative world, or a mentor, things like retouching tutorials were super-helpful, because that was really the only thing I needed help with – a camera is kind of self-explanatory, and I didn’t really do lighting.

I do sometimes wish I had a mentor. When I look at people who study photography at art school, I find it can take them in really interesting directions. But I was also fine doing things on my own, even if I'm very aware of the areas I still need to develop.

Art school in the UK and US can be so expensive; I couldn’t be sure it would actually be worth it. If I'm investing that much money, I might as well do something else and teach myself. But then in Germany or Belgium, courses are actually affordable. If you feel like that’s what you want to do, go for it, and just make sure you make the most of everything. But I don’t think it’s essential.

“Turning down jobs became a gut feeling. I know my vision and my universe.”

Work is ever-evolving
In the last year I directed for the first time, a small clip for Dior. It was actually super-exciting, because it was shaking things up. On one hand it’s so different to photography, but it’s very similar on the other. Just pushing the boundaries of that felt fun.

The direction I’d like to go in next is more artistic again. I didn’t even necessarily notice it at first, but for the last two years or so I’ve mostly focused on commercial work. Now I’m at the point where I just need make some stuff happen, and action some of the things that have been circling around my thoughts for a while. 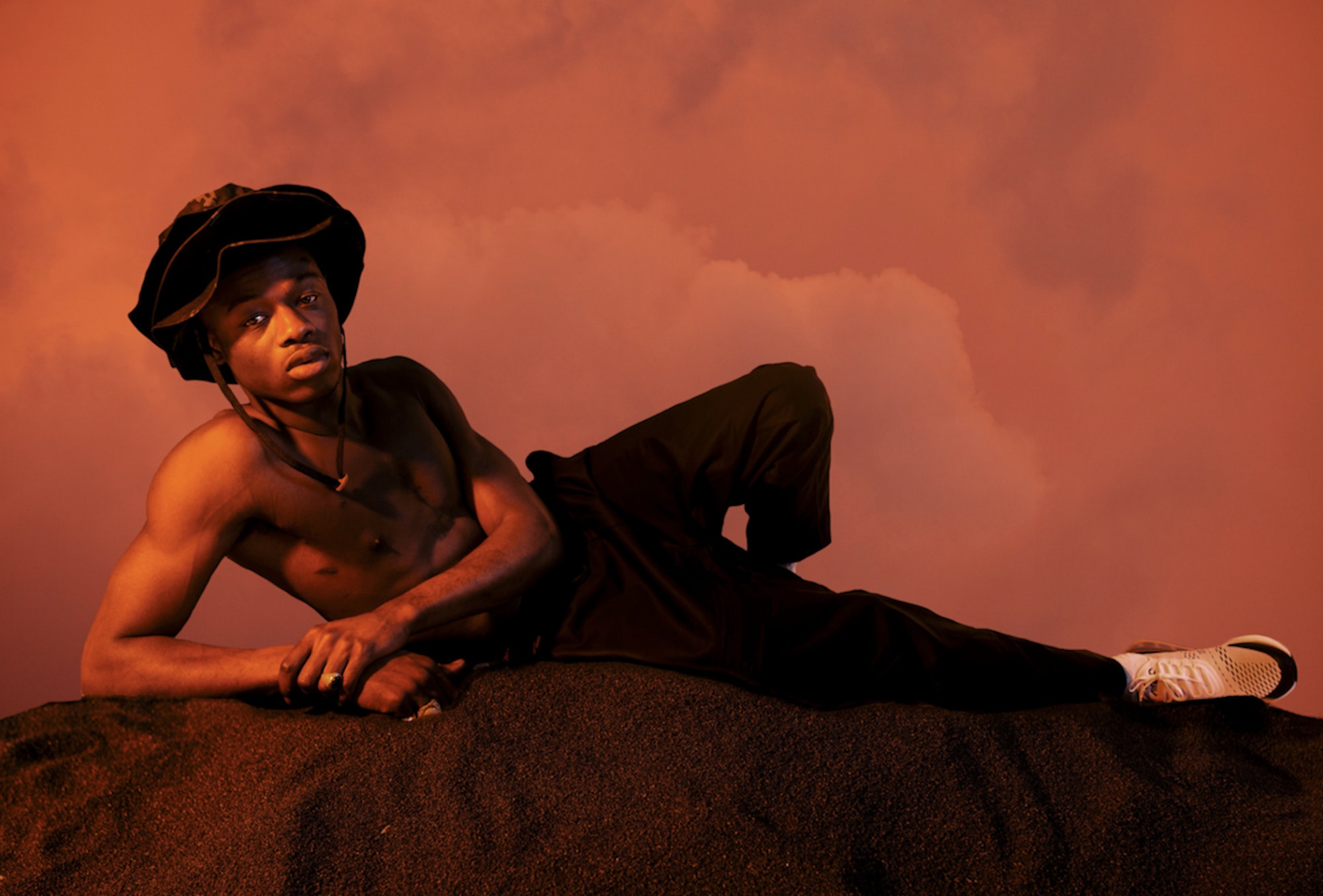 Keeping your vision pure
[Having a strong recognisable style] is really a question of listening to your gut, trusting your instincts, and being able to speak up. It’s also realising that when you’re chosen for a job, you need to speak up, control what’s going on and shape it to your liking as much as possible. Try and push it as far as you can, and if anything annoys you or doesn't look like it should, take it out, fix it or get someone else to fix it. If you’re really listening to what your instincts are telling you, your voice is bound to come through clearly.

I think that does take a certain confidence, but for me personally, I think that comes from being into the work, its potential and trusting my own vision. In everyday life I’m relatively confident, but once I step onto set and get into working mode, it’s a whole different game.

I think it’s important to make as many personal projects as you can – you can’t make too many. That really helped me so far. I was also selective when sharing work – it would only be the things I was proud of. Then I would send it everywhere – to blogs and websites I liked. I entered contests, which resulted in exhibitions. Things with real-life consequences (like shows) are always cool, but it’s just as important that people have seen the work on a random blog or on Instagram. My advice to anyone would be to make as much work you’re proud of as possible, and put it everywhere you can think of.

Words of Wisdom: Craig Oldham’s advice on going it alone and starting a studio

Photographer Katharina Poblotzki on overcoming rejection and fear as a freelancer

A guide to photographing your work with limited resources

Insight into the world of stock imagery: How to become a contributor and its earning potential