London-based filmmaker and editor, Daisy Ifama leaves a lasting impression on her audience. With a stream of powerful and thought-provoking projects attached to her belt, she’s creating stories and telling stories that matter. Although she wasn’t completely set on attending university, some helpful encouragement from her school teacher pushed her to undertake a degree in media and communications at Goldsmiths. Now a freelance filmmaker and editor, upon graduating, Daisy had little knowledge that her current role even existed, or that it was even within her reach. Having helped launch gal-dem in 2015, Daisy felt ready to jump into freelance life after acquiring a host of skills whilst working on the now-established media platform. Daisy talks to us about what it takes to create and tell important stories both online and offline, and how her interest in filmmaking was sparked by YouTube. 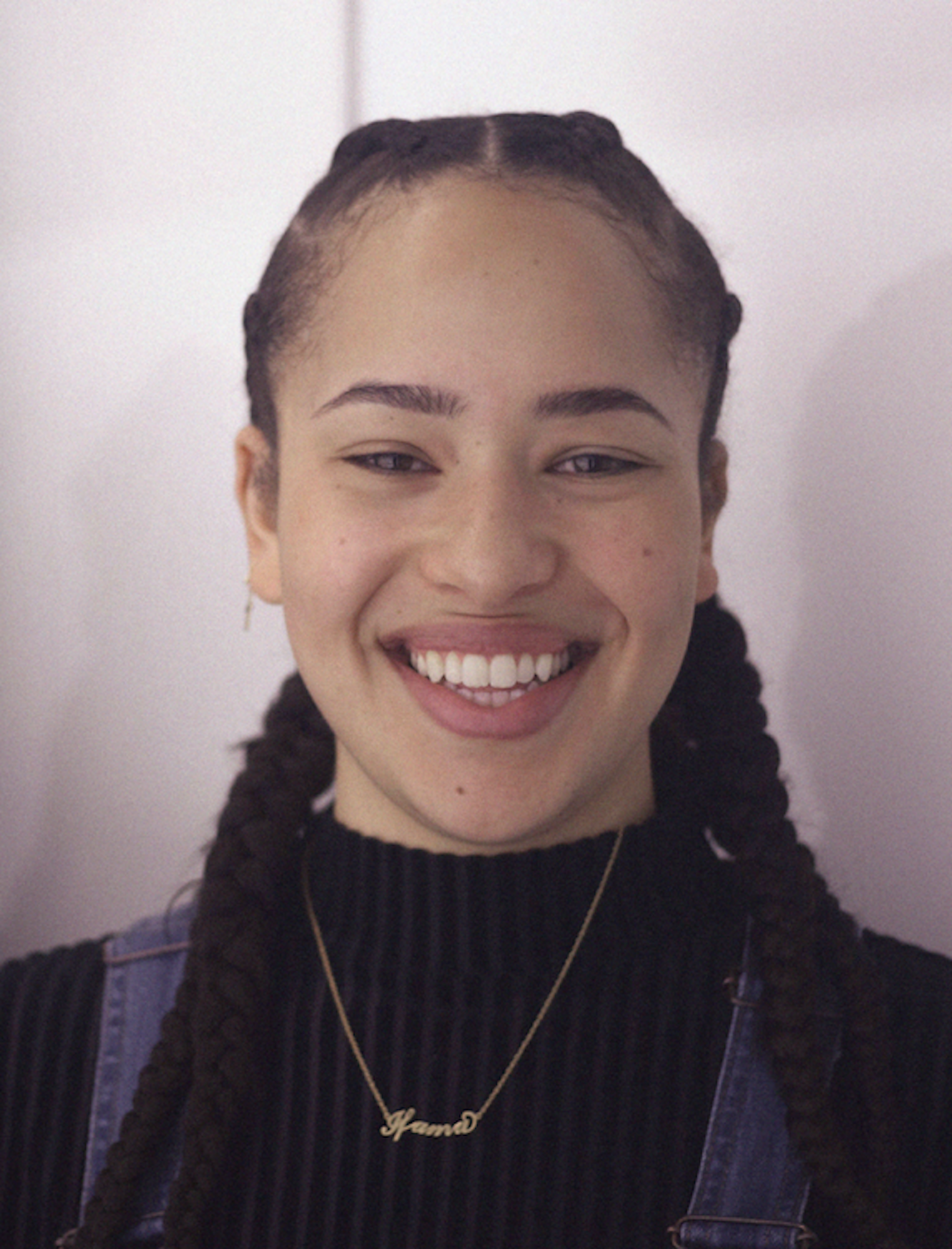 How are you right now and how has this period changed the way you work?
I got stuck in New Zealand at the start of lockdown so I’m still feeling grateful to be healthy and back at home. I had some shoots cancelled, so now I’m really trying to focus on my personal projects. I’m finally teaching myself how to use After Effects and doing things that are outside of my skill set, like this Design a Feminist Chatbot course that UAL has put online.

How would you describe what you do?
I don’t think I have it summed up into a neat sentence yet, but I’m a creative first and foremost. I work mostly on film projects and try to find ways to make them into some form of teachable work offline. I also run social justice workshops in secondary schools.

What does a typical working day look like and where does it happen?
I’m not sure I have a typical working day, as I’m usually jumping all over the place. The most consistent thing I do is over-explain ideas to my mum, and ensure I have everything written down. Once I have the idea, I use quite a methodical approach to getting it on paper. I aim to strip it down to the basics to make sure I really understand what I want to make, and that others find it easy to understand.

Is there anything that is particularly inspiring you at this time?
My friends inspire me the most – someone will be telling a story in the group chat and it’ll make me think of a storyline for a film or an idea for an image series. Because of lockdown, we’re all over the place, many of us travelling back to different countries to be with family – so I have a couple of project ideas inspired by these experiences. I think all of my work does tend to stem from all of these worlds and what happens when they collide.

What has been your favourite project of the past twelve months?
Helping my friend Fran Lobo with her music video for the song Monster [below]. I worked outside of my comfort zone in terms of style. I wouldn’t have attempted it on my own, but her vision and sound really pushed me. She trusted me to make something out of months of recorded personal footage. Another one is going to Austin, Texas to make a film about space and machine learning with Google. I didn’t think I’d ever be able to wrap my head around their discovery, or be able to conduct an interview with actual scientific geniuses, but it happened and it was so much fun on set. It was my first time dealing with live-action and animation in an edit.

You create work that is tightly connected to your own identity and beliefs, was this something you always intended as an artist?
I don’t think it was a conscious decision at the start – it was just the work I thought was important to make and stories I thought deserved to be told. But if you track back through my life, you can really connect the dots, mostly through my mum who has always been a social butterfly.

I grew up knowing people from all walks of life, moving house a lot and really embracing differences. I think you can see how that’s impacted what I like to work on, and what I get asked to work on. I struggle sometimes because I get into the mindset of thinking all work I make should serve a purpose, and sometimes I overlook the fact that entertainment and escape is also a valid foundation for what you’re putting out into the world.

How do you juggle all of the different work that you are involved in?
Only recently have I taught myself how to take a break and not take on too much. Because I enjoy everything I do, it can be hard to know when I need to stop. Having a calendar with everything listed has helped me to be honest about my time. I also just love to sleep, so making sure I get eight hours is now a top priority.

“I don’t think university is necessary at all, and I wish it wasn’t always encouraged to students who are more creative and practical with their learning.”

Do you feel you need formal education for what you do?
Initially, I didn’t want to go to university because I was so scared of the debt – as I was in the first round of students having to pay £9,000 in tuition fees. However, I was an academic student and my English teacher Ms. Strachan cornered me when I was doing my cleaning job after school and sat me down every day to tell me about different courses. She suggested Goldsmiths and I ended up going there and I’m thankful because the social side allowed me to grow into myself more. But, saying that – I learned everything I know from my good sister, YouTube. I don’t think university is necessary at all, and I wish it wasn’t always encouraged to students who are more creative and practical with their learning.

What was your journey like when you first graduated?
I didn’t know my current career even existed at the time, and no one in my family worked in the creative industry. I had to really get over the idea that my family all had tangible trades, like hairdressing and scaffolding, and that I didn’t have a ‘skill’. I knew I could edit a bit, so I applied for a job making Facebook food videos, whilst also setting up gal-dem. After a year I felt like I’d done so much with gal-dem that I could go freelance and work on lots of different things and thankfully it all worked out.

How did you begin to tell stories through films and videos?
I think I really started to think about storytelling through film when I found a web series called The Peculiar Kind on YouTube. It was a group of American queer women of colour having unscripted conversations and I was obsessed! I thought a lot about the impact it had on me, and how I wanted to make that work for someone else.

Would you say you ever experienced a lucky break? Or has there been a project that particularly helped your development?
Yes! When we made gal-dem, we were very fortunate to be doing it at the right time and with a lot of like-minded people with their own separate interests, strengths and networks. I think we were lucky all those components came together, and our hard work and creativity was recognised. Doing everything myself forced me to get all of my skills up to scratch. I was the researcher, producer, director, interviewer, camera-woman, soundie and editor all in one. It helped me understand and appreciate the process of each role and where I think I work best.

Development wise, whilst I was at Google I pitched and co-directed a documentary on women in music across Nigeria, Kenya and South Africa called Womenwill [below]. It was launched at a digital skills event on International Women’s Day. Being trusted by the team with something of that magnitude so early on really helped me believe in what I was doing. It was fundamental in helping me step up my work.

“Imposter syndrome is a funny one, especially when your CV is telling you something else.”

What’s been your biggest challenge in navigating the industry, if any?
Imposter syndrome and knowing how the industry works. There’s no blueprint for any of this, and that can be hard to understand when you first start out as you’re not sure how to work on the things you want to. Imposter syndrome is a funny one, especially when your CV is telling you something else. It still hits me, and I often struggle especially when I have different cultural references to some teams I work with. It can make you feel like you’re not prepared when really your pool of knowledge is in itself its own strength.

What advice would you give to an emerging creative wanting to get into the same line of work?
Don’t underestimate the power of personal projects. You are the best person to tell your story and this will often be the strongest thing in your portfolio, and the most enjoyable work to make. If you have an idea for a film, work with what you have – storyboard it, shoot a concept on your phone and use that as your pitch. You might be sitting on the best music video idea ever, but no one’s going to know it if it’s just in your head!

See everything as a creative opportunity and a chance to learn, even if it’s not the exact role you want to be doing. Being open and easy to work with is such a strength and people often underestimate working on their soft skills, but if you’re a freelancer it really is the difference between being hired by that client again or not. And find your people. Especially if you are underrepresented in industry. Campaigns, films and TV shows are becoming visually more diverse, but the teams working on them are slow to change. You will need your people, they will hold you up and vice versa.

In light of what’s happening at the moment, do you have any thoughts on how artists can work together or use their skills to create change or impact?
I’d say we need to strip things back, make the priority simplicity and effectiveness. If you’re making something new then really think about what people need right now and don’t be afraid to ask other artists to help out on it. I think now more than ever, we’re all looking to work on meaningful things. I also think it’s important to think about our next steps and how we go about changing the things that the pandemic has highlighted.

‘Experiences of being multiracial’, Random Acts

From Gardeners’ World to going it alone: Freelance director and filmmaker Will Dohrn

How filmmaker Elliott Arndt made the most of his network, and Facebook, to create his latest music video for City Slang

Why visibility and representation matter: Vanessa Whyte on co-founding a platform for female cinematographers