In the Studio With — Einstein wisdom and viral videos: we enter the world of advertising agency Creature of London

From producing theatre to creating political broadcasts, Creature of London have amassed a wide-ranging portfolio since it was founded in 2011. With its roots in Seattle, the Shoreditch-based agency was set up by Dan Shute, Ben Middleton and Andrew Gibson and Stu Outhwaite, and has since attracted a loyal client base that includes the British Red Cross and the Green Party. You might remember their brilliantly witty viral video for the latter as part of last year’s election campaign, featuring a cast of 5-year-olds as squabbling politicians. Here, co-founder Stu Outhwaite fills us in on tackling tricky briefs, taking advice from Einstein and the importance of self-initiated work (it might just earn you a Laurence Olivier Award nomination!).

36: Divided between a Head of Production, Creatives, Account Managers, Planners, Strategists and Finance

Creature is an independent creative company making brilliant things for a whole host of clients, including Anchor, Tetley and Gatwick Airport. Whilst our bread and butter is more traditional TV work, we’ve written musicals, made music videos and even tried to host our own festival.

The company began life in Seattle. After the original agency won a big job with Microsoft, they decided to open up an office in London. Myself and the original team members [Dan Shute and Ben Middleton] were sort of poached from our respective advertising agencies to help get it off the ground, and then we ended up running it. We’re still based in the same office as when we started as a team of six; we’ve just grown as more business has come in. The Seattle agency no longer exists, so for the last two or three years we’ve been operating independently.

“We’ve written musicals, made music videos and even tried to host our own festival.”

It was always the intention to try and do things a little differently, and a big part of that was forming partnerships with clients and creative collaborators alike. That involved keeping production out of house, which is where we set ourselves apart from other agencies; we wanted to streamline and work with the best creative practitioners in the world. Some might say keeping production out of house is naive from a business perspective, but we’d much rather go to specialists than work with a jack of all trades. 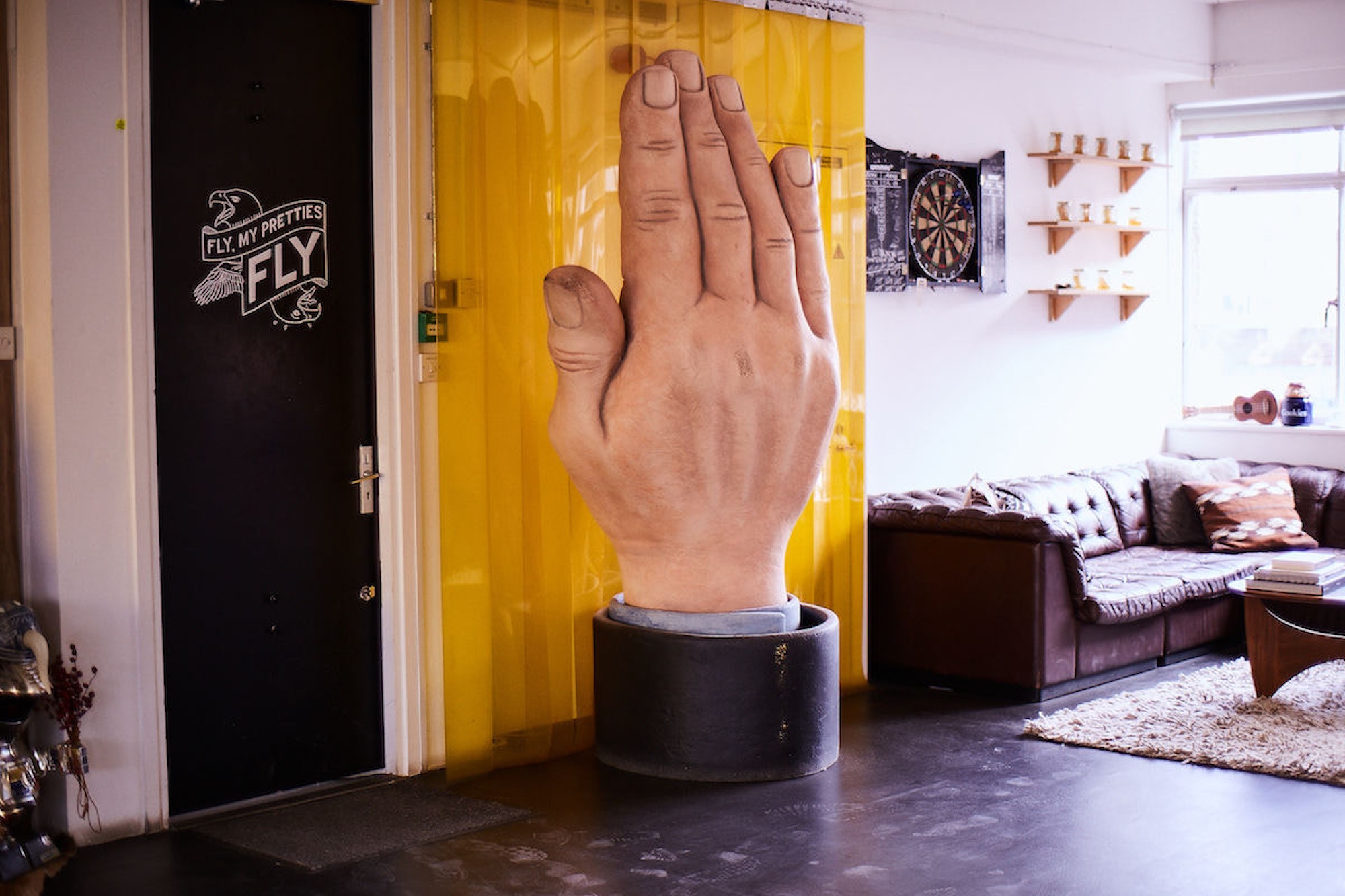 Inside Creature of London 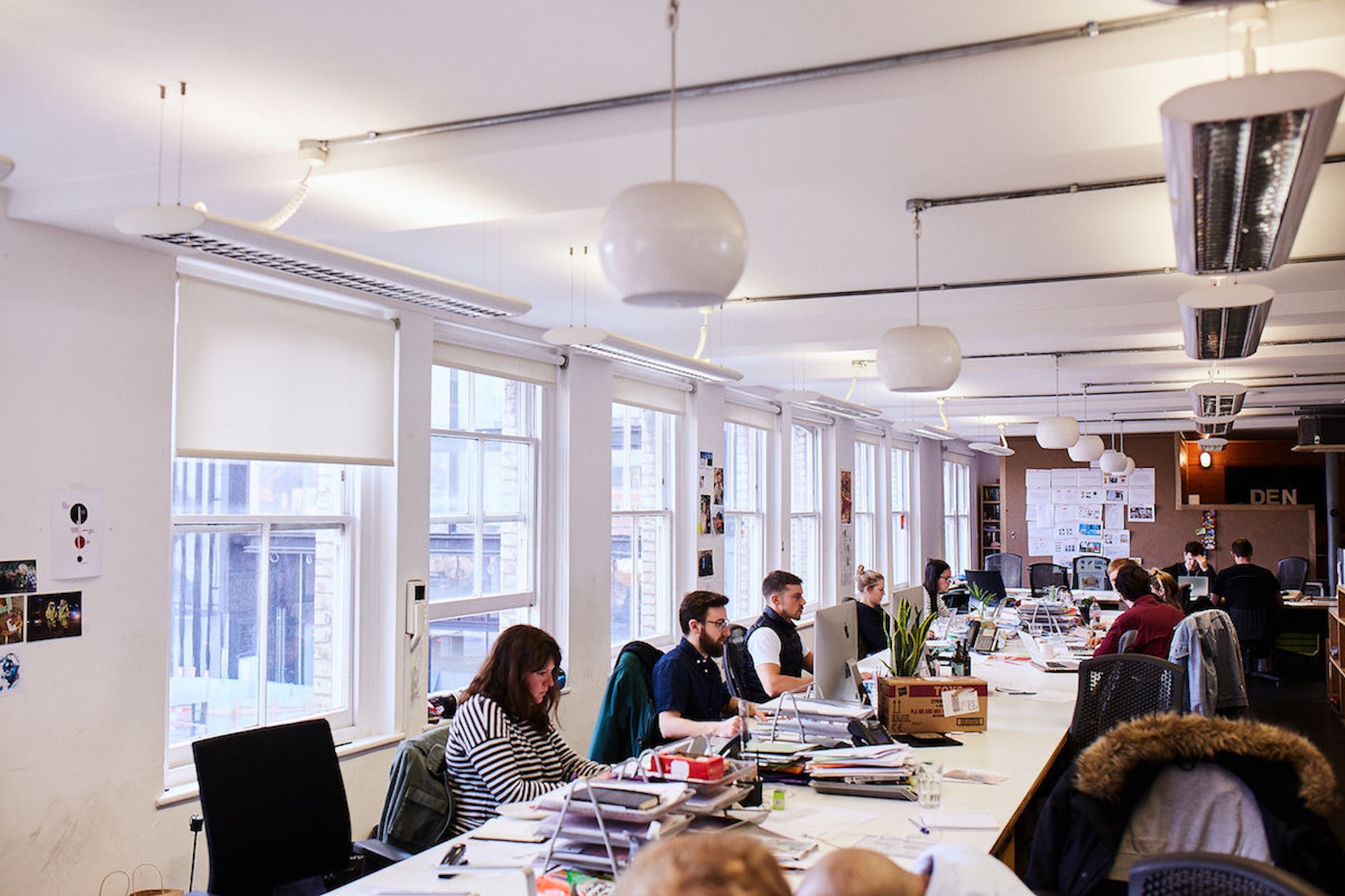 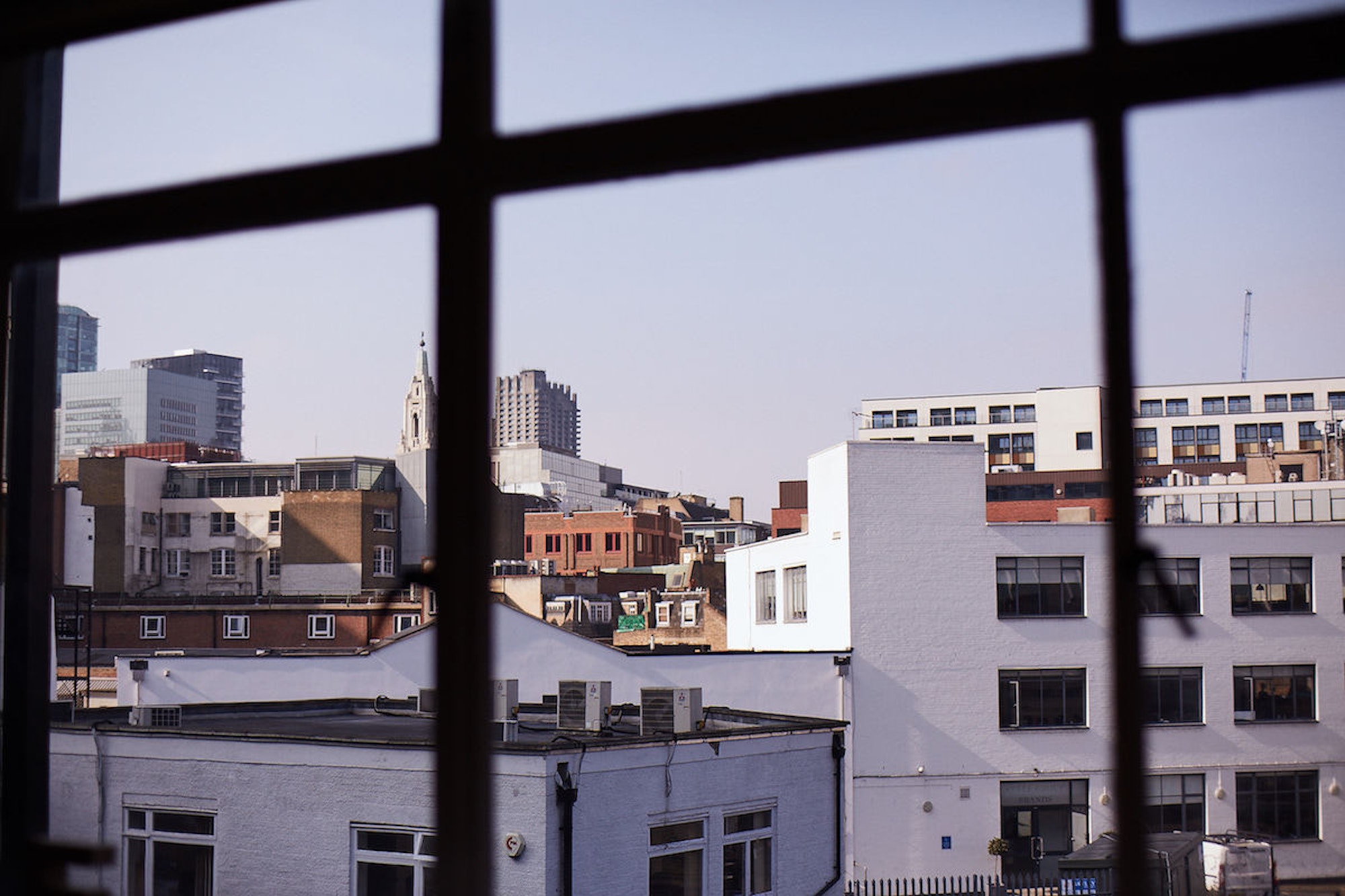 The view from Creature’s Shoreditch-based office 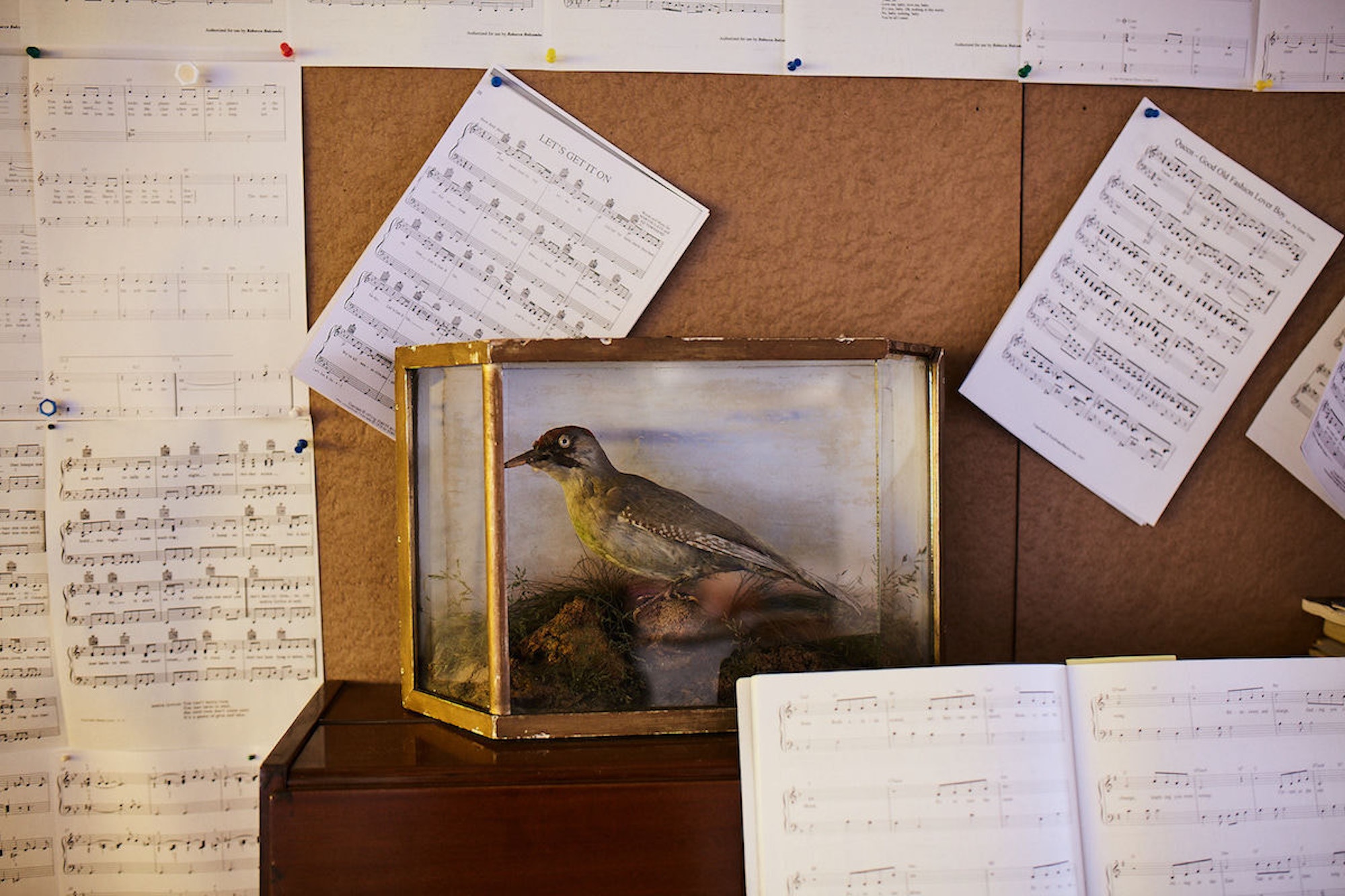 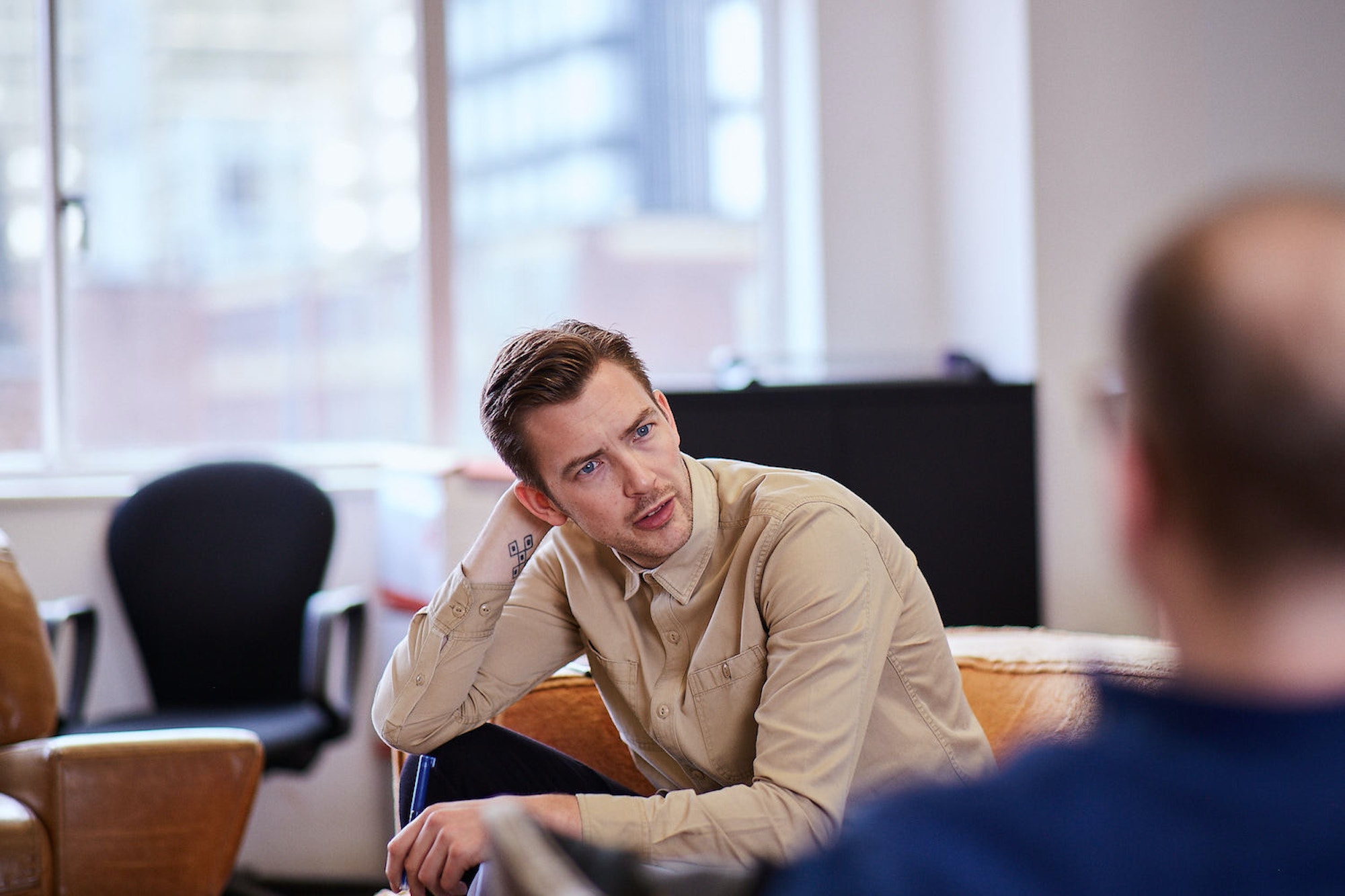 We believe in using ‘intelligent misbehaviour’ to make things that people really care about. Put simply, that means breaking the rules with purpose, in a way that engages with audiences. Our philosophy is that it doesn’t matter what you do or say if people don’t hear, listen, respond or react to it. Often this will mean going out and understanding the culture of a brand, product, charity or political party, to see how we can make a genuine impact.

One of the things we’ve been most proud of in the past 12 months has been our work for the Green Party. We worked on a parody of The Secret Life of Five Year Olds for the London mayor election this time last year, which became the first thing we’ve done that genuinely went viral. We cast a number of five-year-old kids as politicians such as Boris Johnson, Theresa May, David Cameron and George Osborne, showing the childlike fighting that happens within the parties, and it gained over 20 million views. It was also lorded as the best political broadcast ever made by various papers, and helped push [mayoral candidate] Sian Berry to third place in the London election. We were pretty happy with that.

“Some might say keeping production out of house is naive from a business perspective, but we’d much rather go to specialists than work with a jack of all trades.”

This year a similar Green Party brief landed on our doorstep for the snap election. We only had two weeks from briefing to completion, which is the quickest we’ve ever produced anything like it (we wrote it, got a director, cast, shot, graded, edited and supplied it all within a fortnight). This time around we created ’90s-style TV board game, called The Race to Number 10 – Snap Election Edition. To produce something in this time frame meant that we couldn’t worry over smaller details – we had to just believe in the power of a good idea, which isn’t a common way of working, but it really should be.

This year’s campaign video for the Green Party, created in just two weeks

In other agencies there can be a waterfall approach, where a brief is passed between separate specialisms, but we feel this has the potential to get into a mess. Generally speaking we will gather as a team on a new brief, putting together a crack squad of strategists, account team members, two creative directors (myself and Ben) and a creative lead. There is a quote of Einstein’s that we kind of live by: “If I had only one hour to save the world, I would spend fifty-five minutes defining the problem, and only five minutes finding the solution.” We like problems; when a brief comes in we will talk about the challenges and opportunities, before going off to explore that creatively and strategically, then we’ll regather once we feel excitement around a possible solution. We don’t believe in having big-reveal moments with the client, so we’ll involve them along the journey.

As a team, the thing that unites us is our interest in good end output – so no matter what your job is, we all play a role in making brilliant work. When we’re recruiting, we look for people who are inherently creative and interested in making others listen and act. Beyond that, we also only hire people we’d want to have a pint with! We tend to have an office of social, likeable, interesting people who would probably be the stars on any wedding table.

When you don’t have production in-house, it’s important to have a well-curated black book of amazing people from the art, fashion, theatre and design worlds and production companies, so one of our most unique roles here is the creative liaison officer, who is responsible for proactively building and keeping those contacts and connections.

Work placements is something I’m quite passionate about. I worked on creating a scheme called a the Placement Poverty Pledge, which aims to ensure creative placement teams are paid fairly and properly. We take on people for work placements for between one and three months, at the London Living Wage of £9.75 per hour. We treat them just like any other creative team in the building so they will work across everything. Then if we keep them on, we pay a freelance rate of £100 a day.

We’d like to think we have a creative space; one in which ideas can be had. For starters, the walls are covered in this quite ugly pin board, so work is pinned up everywhere. We believe creative work best exists in the open, where people can see and respond to it. Everyone is invited to stick things on it, draw on it, as opposed to things just existing on laptops or closed notebooks.

We want Creature to be the best place that anyone’s ever worked, so you look forward to coming in. We don’t have a culture of working late unless it’s through necessity, and our employee benefits include both travel and health insurance, we are officially living-wage accredited, plus we have fantastic maternity and paternity cover. We do something called the pound-a-day scheme, which lets people have affordable massages or gym membership. We also have yoga on Mondays and a thriving baking culture (every week someone bakes a cake!).

“There is a quote of Einstein’s that we kind of live by: ‘If I had only one hour to save the world, I would spend fifty-five minutes defining the problem, and only five minutes finding the solution.’’’ 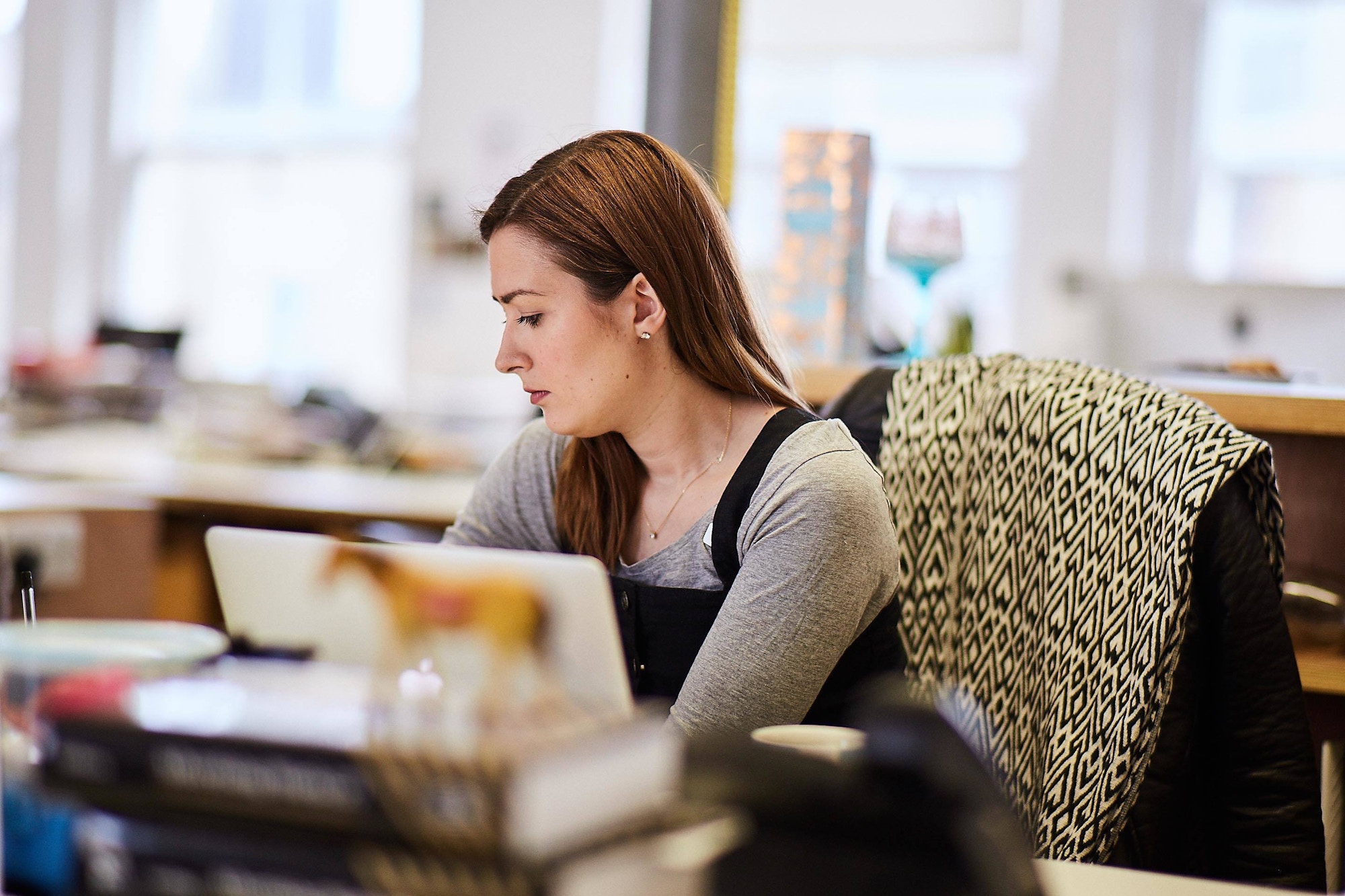 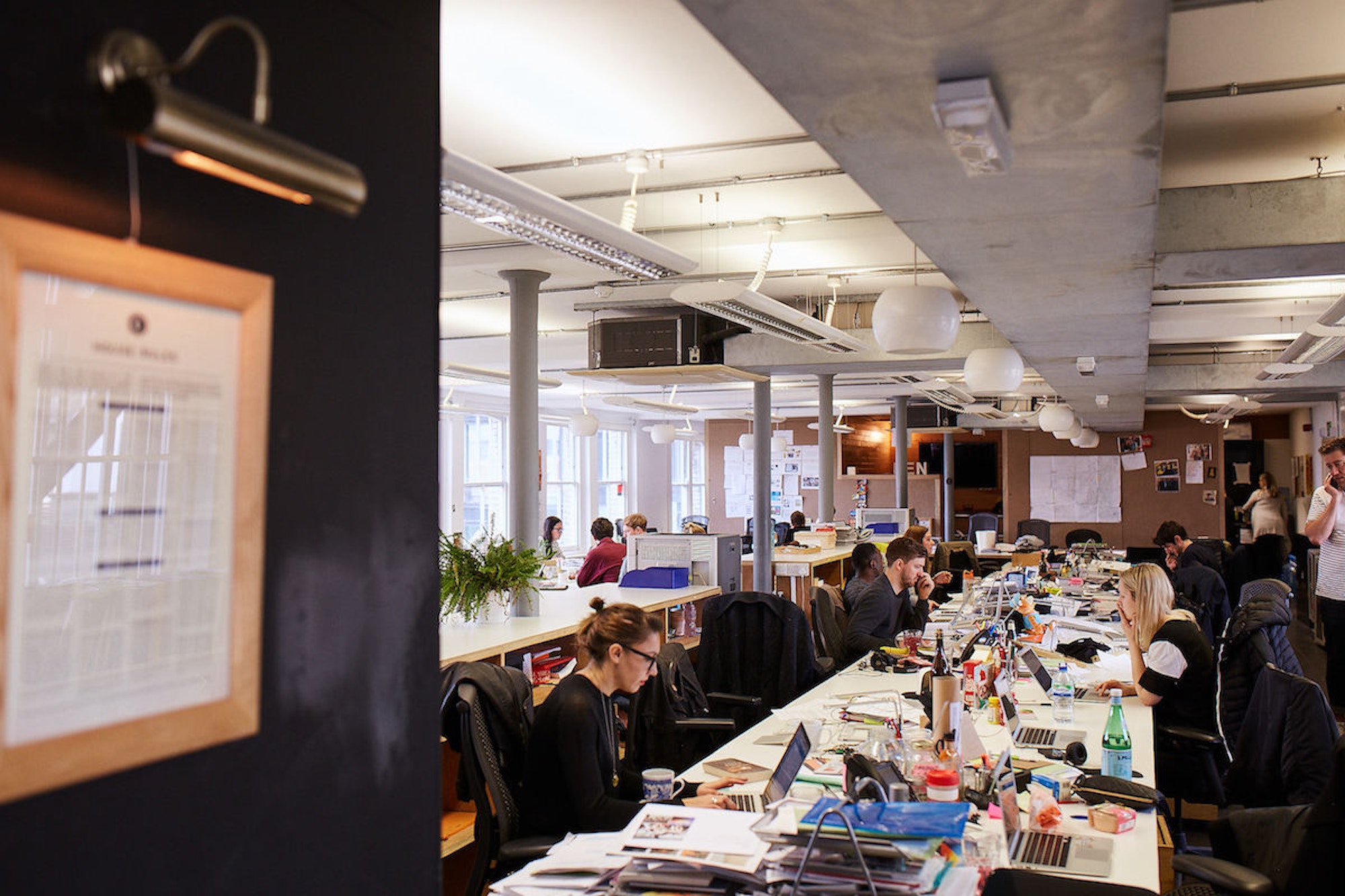 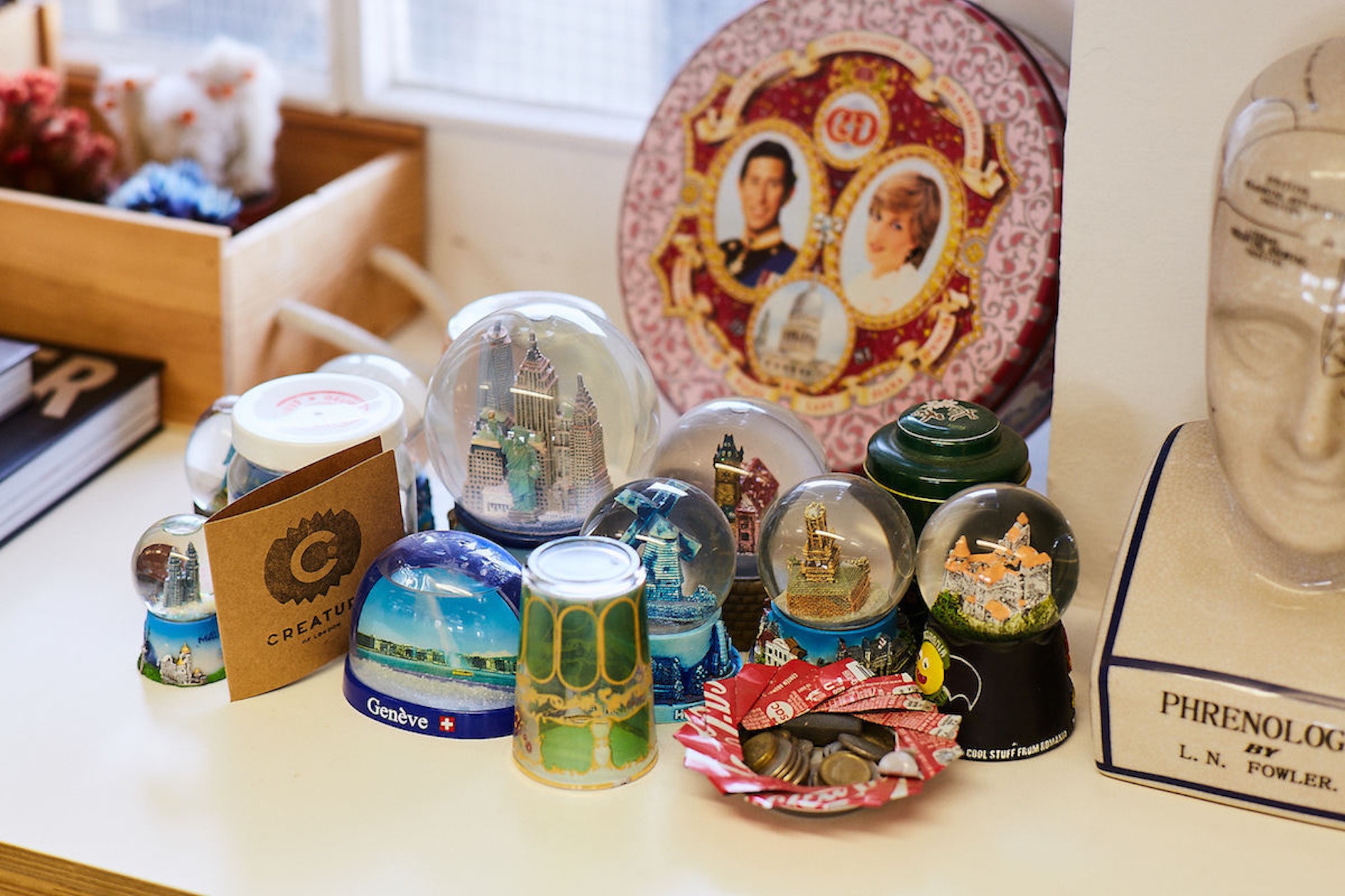 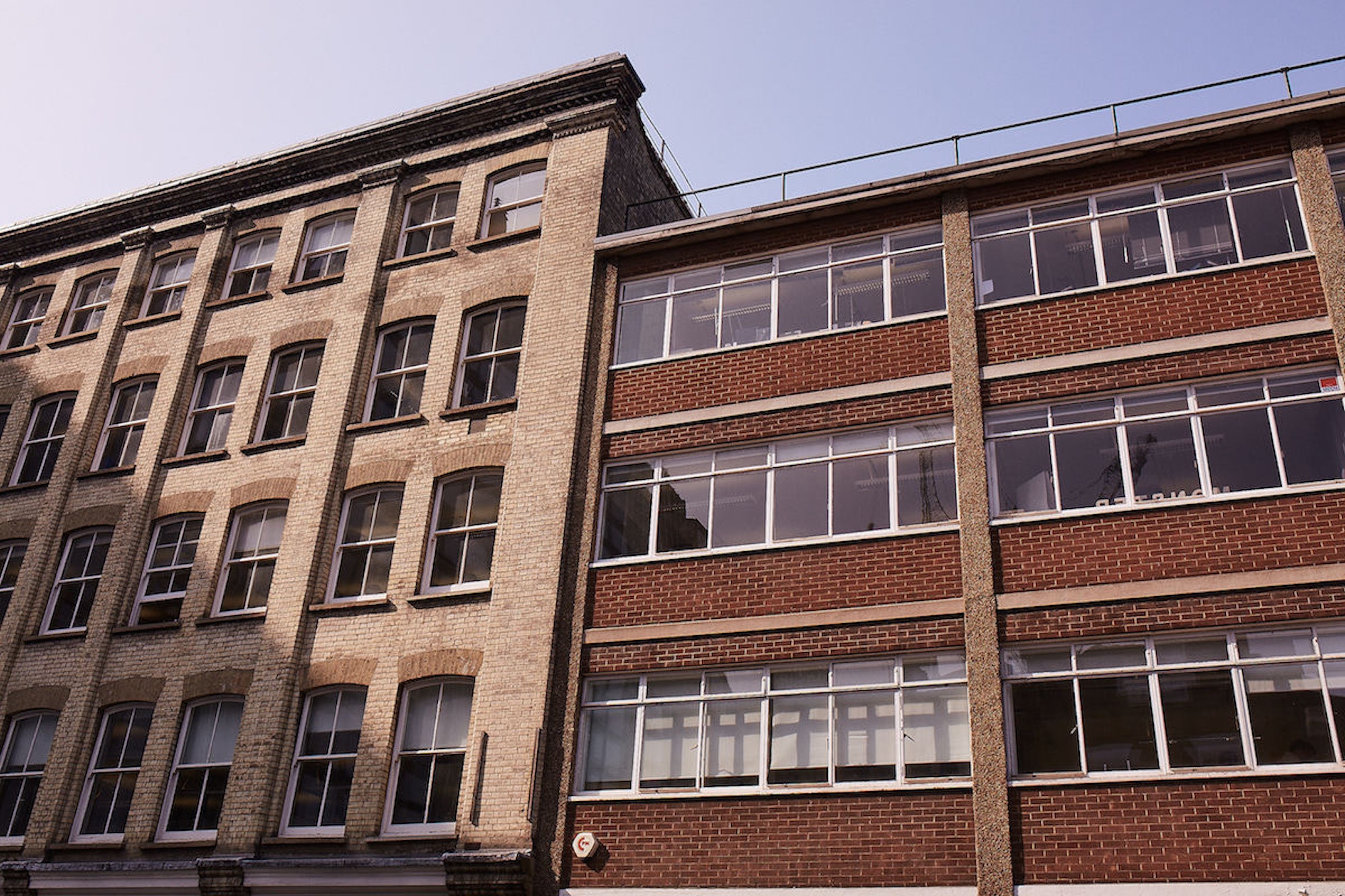 Creature from the outside

One of our meeting rooms is called The Beast, and every month we host something called Feed The Beast, where an interesting speaker comes in to chat to inspire and enlighten us. We’ve had everyone from the likes of Mr Bingo, performance artist Bryony Kimmings, photographer Gavin Watson and Arthur Mathews (who wrote Father Ted), to a mental health doctor and a silent film pianist.

We actively promote people doing their own projects, and run an initiative called Creature Creates, so anyone on the team can put forward ideas with the potential of getting support, resource or investment. One of the first things we did as an agency was self-initiated; we took a comedy musical to Edinburgh. It was called The Church of Now That’s What I Call Music 23, and it involved a 30-strong choir doing choral renditions of songs from the Now That’s What I Call Music series. That got us interested in the world of theatre, and since then we’ve co-produced a show called the The Hairy Ape at the Southwark Playhouse and worked on Emma Brünjes’ Alice’s Adventures Underground – a theatrical experience in the Waterloo vaults, which ended up being nominated for an Olivier award!

Creative Lives from Creature of London

Alex Blacklock, account director at Creature of London: “You have to be the person with a plan and be prepared to argue”