Founding a business in an emerging sector can be tough. But when you’re getting things off the ground with little support and no obvious role models, the journey comes with a whole new set of challenges. Back in 2013, Alexander Fefegha and Akil Benjamin did just that, setting up Comuzi as a creative technology studio. Through years of hard work and continual innovation, they attracted clients including Asos, BBC, NHS and Uber. Earlier this year they were invited to Number 10 Downing Street and were named BAME leaders in UK tech by The Financial Times and Inclusive Boards. But they admit they’ve only recently felt comfortable enough to put their faces to the company as directors, formerly worrying that “people wouldn’t believe” it was their work. We talked to Akil and Alex about their experiences as founders – from the complexities of racial and cultural stereotypes, to how they are helping a new generation with Safe Space (to promote mental wellbeing) and Creative Hustle (to support emerging careers).

Dress codes and starting out

Alex: “Growing up where I grew up, the creative industry was not a world I saw myself in. I didn’t even know it existed, or that there were companies that used intellectual capital to be able to make intangible things tangible. Let alone that there would be a pay check at the end of that.

“At school, I was academically good, so I was already being shaped to go for a traditional white-collar industry. That was the pinnacle of ‘You’ve made it’ – suit and tie, Canary Wharf type-of-thing. Coming from Peckham, things were around the poverty line, and circumstances were a bit difficult.

“It’s become a bit of a running joke that when Akil, Richard and I (the three co-founders of Comuzi) started on this journey, we were actually wearing three-piece suits, because that’s what we thought we should wear.” 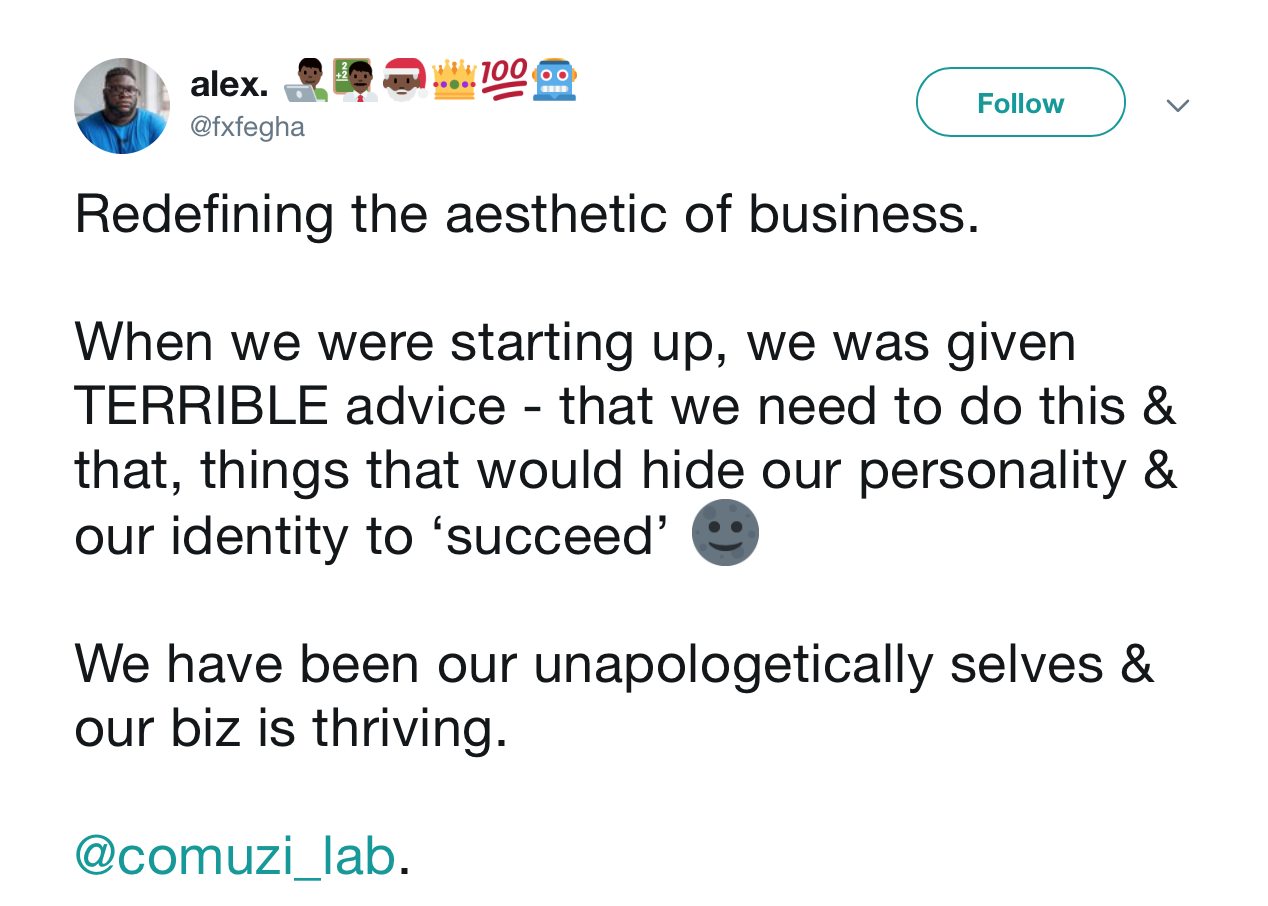 Akil: “There’s a picture of us all dressed to the nines when we opened our company bank account around 2013. We were 18 or 19 – I was wearing a red bow tie. But now I get to express myself in my clothes, instead of being told what to wear. It’s about asking: How do I come across as myself? Because that’s exactly what I'm selling: what we wear and who we are is a defining part of what people buy into. So we have to consider how we communicate that most effectively.”

Defining an identity in an unknown space

Alex: “When we were starting out, we also never had our pictures on the company site. There’s this whole thing of nuances of race and other stereotypes. Obviously we began the company as a uni project, and had all these really naïve visions, not knowing where we could take this to.

“You’re trying to run a business, so you have to get your shit together. You look at the companies you want to be like. For me, I was shaping website, brand – everything just to be on that level – like the fake it ’til you make it notion. Everything looked visually nice, but we were scared of putting our faces to it. We thought it would take away business, because of how we looked, our age or what we were wearing.”

Akil: “For the longest time we also never said that we were founders or directors. We just used to say that we were employees ‘at a small firm’. We didn’t admit that we owned it – we thought people wouldn't believe it.”

Alex: “There weren’t really any role models at the time, or something similar that came before us. Whereas now, you might see Ollie Olanipekun from Superimpose – a black guy with his own agency, doing cool work with adidas and Burberry. But there was no aspiration like that. It was an ambiguous space, and you’re trying to find yourself within it. I remember when we first got to ustwo Adventure [where Comuzi were based], we were told that we did cool work but didn’t hype ourselves up. It genuinely took somebody doing an external audit for us to realise we were running away from it.”

Akil: “We were looking at other studios and companies, asking ourselves: How do we do it? And for me, as a person of colour, there’s always that slight tinge – it changes the lens a little bit. Since there were no role models (and I'm working on that), we had to use the resources available to us. Mills and Sinx [from ustwo] were available to us. Jo from Morrama was available to us – all these great, talented world-leading people. We talked to them and asked how they did it. And we've been slowly piecing it together and translating it – working out what that means for us as individuals.

“But I also think that silence and quiet time was really needed, because it meant we weren’t a flash-in-the-pan trend. We've got five years of history, and that means we've got depth.”

Alex: “Obviously there has been a recent cultural shift. The creative industry in general have become more open to all sorts of individuals, with their own personalities and identities. This naturally works in our favour, when you’ve got two co-founders who both have dreaded hairstyles doing their own thing.”

Designing for cultural diversity and inclusion

Akil: “At the beginning of this year, we did a three-day course with a company called Fearless Futures, which teaches diversity and inclusion. They’re amazing people, and that literally shifted the way I looked at my work. I thought I was ‘woke’, aware and conscious of what was going on around me, but after that my whole world view changed.

“The idea of cultural diversity and inclusion is built into our work, whether that's through AI or other emerging technologies. That shift is real. But just because we know these things, it doesn’t mean the rest of the world will. You still need to be patiently persistent with the world around you, and understand who you are designing for. Catching up with the idea of inclusivity isn’t just jumping on a trend, it’s an absolute essential.” 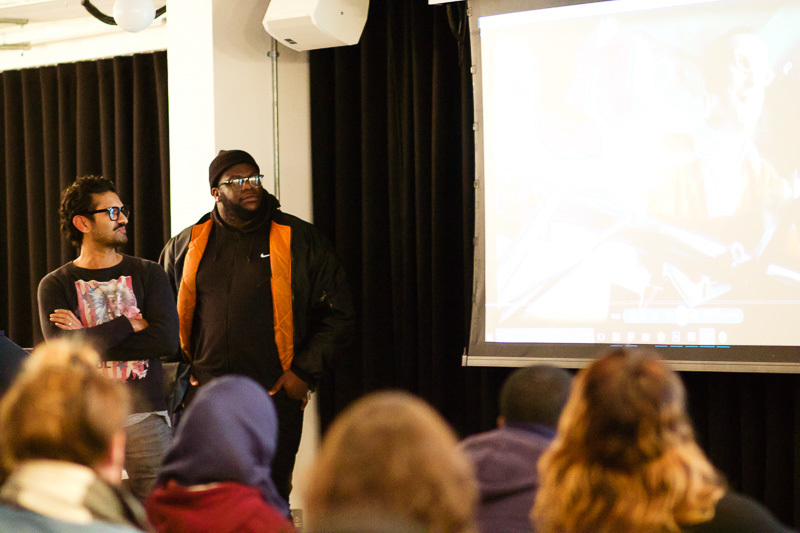 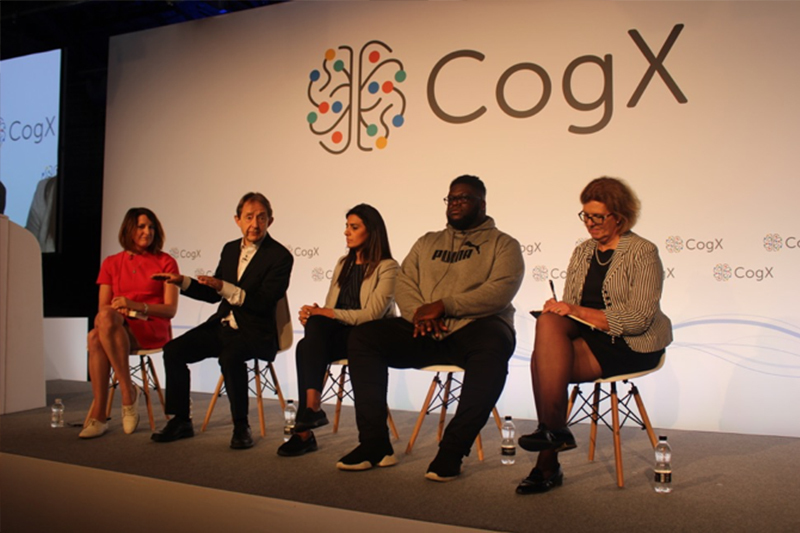 Alex on a panel at the CogX Festival

Alex: “Before we started [mental wellbeing initiative] Safe Space, I made a tweet saying, ‘Would anybody be willing to talk about mental health and the pressures of success?’ I was very much focused on immigrant families, because I think when you’re coming into a country that's not necessarily your place of birth, the stereotypical notion is that your parents come and work three jobs, and then you want to be a hipster creative. You turn your back on a corporate job that pays £80k to work in advertising, which has starting salaries of £18k.

“So when people ask, ‘Why aren’t more people of colour working in the creative industry?’ it all starts at home – having parents or grandparents who understand what you do. Safe Space is a chance to come and discuss those pressures, because systematically you’re already in a house that has been work-orientated, where you weren’t able to be open and talk about those things. That can be taxing, and people explode.

“Safe Space is a three-hour session, where you put your phone in the middle, admit you’re not feeling good, and speak. It’s very emotional, but I know I’ve improved as an individual by doing it. Before that it was all in my head.”

Akil: “In some ways, being part of Safe Space can influence your approach to work, too. To work on diversity, ethical design and inclusion, you need to be empathetic to the world around you. You need to be able to not pass judgement and try to understand different reference points.”

Alex: “People can genuinely feel like the only one going through shit. But when you have a safe space, you can learn that we’re all broken, and the solidarity itself is helpful. You find out how people deal with things and get through it. But Safe Space isn’t a scalable project, it’s just something we do every fortnight on a Friday. Anyone can just as easily do it with their friends.”

Akil: “It’s about being brave enough to ask directly, ‘How is your mental health?’ in a space with people you care about. Then, obviously, if anything hits the boundaries of what you can manage, you can seek further assistance and help.”

Helping the next generation with Creative Hustle

Alex: “It’s nothing new to look different or to do business in different ways – but we just didn’t know that this world existed. That’s why we created the Creative Hustle [a non-profit organisation that helps young creatives of colour] in 2016. We called it Creative Hustle because our journey has been an actual hustle; we’ve had to force ourselves into this space.

“We thought: How do we plant that seed in the minds of young people, to know that they can work in advertising or design? So it started as events and workshops. But one of the biggest barriers to entry is equipment: A Mac is really expensive – you can buy a second-hand Vauxhall Astra for that money. So now we’re working on offering a micro grant fund.

“Micro grants have one of the biggest impacts to allowing access. You can give people all the knowledge in the world, but if you don't have the tools to practise, what can they do with it? If we can help an emerging creative community become self-sufficient, then we can bridge some of those barriers. You sow a seed for someone’s career.”

Akil: “We dreamt of getting to where we are now, but we didn’t know how it would happen. We kicked off this year working with dream clients Google, Microsoft and BBC. We never knew how we’d be able to work with them, but we ran a workshop and they were all interested in attending. The only way we can do this is by having those ideas and then walking with that, and never stopping.

“Sometimes my biggest barrier, from a mental health perspective, has been actually showing up for work. But I know, from the minute I get here, I’ve given myself every opportunity to succeed, so I might as well take it.

“Self-doubt is always going to be there and I’m scared every time we start a new project. But now I’ll remind myself that I’ve felt like this before, so I know we need to run straight into it. I can be lost, confused, but at least I’m there, I’ve chosen to focus, and now I’ll do what I said I’m going to. Getting up and doing that again and again gets you somewhere.”