Parts of the Process — 38 Coca-Cola Emojis by Koto

London based studio Koto burst onto the design scene at the start of 2016 with their comprehensive rebrand of Gumtree. The three founders – James Greenfield, Caroline Matthews and Jowey Roden built a wealth of experience at many of London’s top agencies prior to starting the studio at the end of 2014 and it’s grown quickly ever since. The studio prides itself on understanding the essence of a brand and making things come alive and here they talk us through their recent work for Coca-Cola and 38 emojis they created for the brand to use globally…

Where did the project come from?
A designer who we had long ago connected with online put us forward. He works with Coca-Cola and thought we would bring something to the tricky brief. The team then asked us amongst a number of other partners to initially put forward some ideas. This was our first project with Coca-Cola and it’s been a big part of the studio. We are now a global partner agency and we work together on some really interesting collaborations.

Was there a pitch involved?
The first round of creative was a pitch. We got paid to pitch, but invested three times the amount of time we got paid and had five designers on it, which is a lot for a pitch. This reflected our excitement in the project and the brief’s possibility. On this occasion we didn't get to fly to Atlanta to pitch as it was so quick in the turnaround and time scale. We will always look to present in person when possible.

When pitching, how much is it about answering the brief and how much is it about demonstrating how you work?
It’s all about answering the brief and using our process to deliver the answers. In some cases we need to show the specifics of a process to give the client confidence, especially if it is a challenging creative idea or a stretch on their expectations.

What was the brief?
It wasn’t overly defined, but it was very simple. In essence Coca-Cola wanted an emoji set they could globally engage that felt distinctly them yet were still functional emojis that didn’t require a lot of explaining.

How do you approach projects of this nature?
This project had some very different inputs from most of the branding projects we complete. We don’t have a 1,2,3 approach, but take each project as a new and different brief regardless of the similarities it shares with other briefs we may have completed. In this case it was on the different end of the scale so it needed more research to start with.

How do you gather relevant insight to inform the direction you take?
We approached the research stage from two angles. First the semiotics and construction of the emoji and it’s explosion into popular culture. Beyond that we looked into the history of the face depicted through folk art and global culture. This included a visit to the British Museum. It’s sometimes hard to make the time to step away from the computer, but in this case we wanted to understand what are the pure basics of what a face needs to be a face. We looked at the nuances of each culture and where character was most playful. Lastly we took the elements of the coke brand, from colour to form to icon and made sure they felt in line with that. 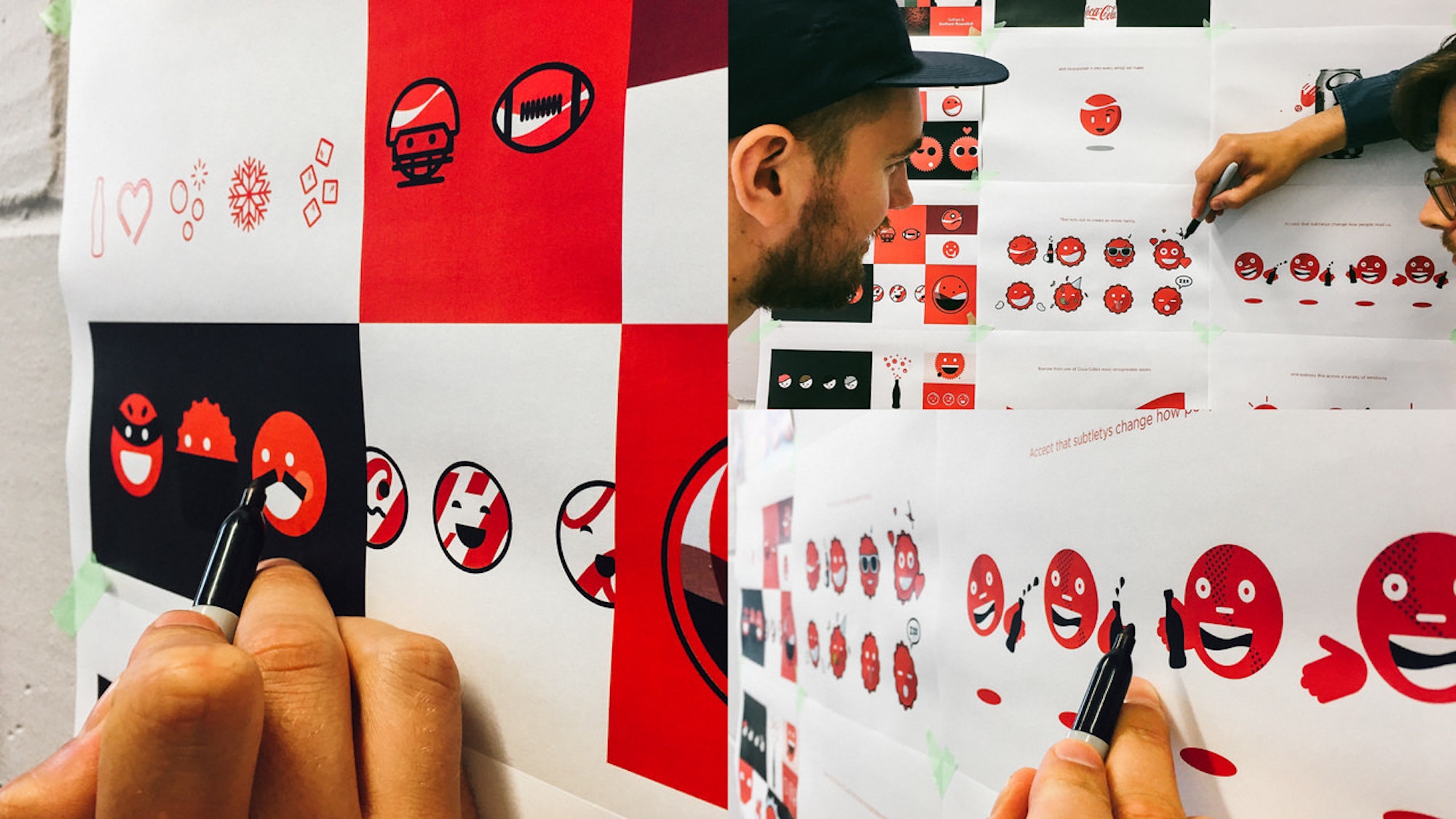 What is the idea and concept behind the work?
Straight away we dived into the tension between Coca-Cola as a brand and an emoji. The Apple and Google emoji designs dominate the popular visual conception of an emoji. We needed to retain enough of these semiotics and combine it with the key aspects of the Coca-Cola brand. Coke clearly own their red, the ribbon and their logotype. The logo was out so it was a case of leaning on the ribbon and colour. As this developed we also struck upon utilising part of the physical product and made the cap from the iconic bottle the emoji holding shape.

How many routes are presented to the client before they agree to a chosen route?
In this case we made four initial routes to show the breadth of our thinking. We aren’t a one solution team and optionality helps engender choice in our experience. Each route took an overall thought that resonated on some level and then applied layers on top of it. The eventual result was four different routes, that all we felt, fitted the brief and worked in a way we believed Coke could own. All of the routes had similar thinking around what made an emoji, but were very visually different in approach. Some used dimension, some were more adult, others younger. 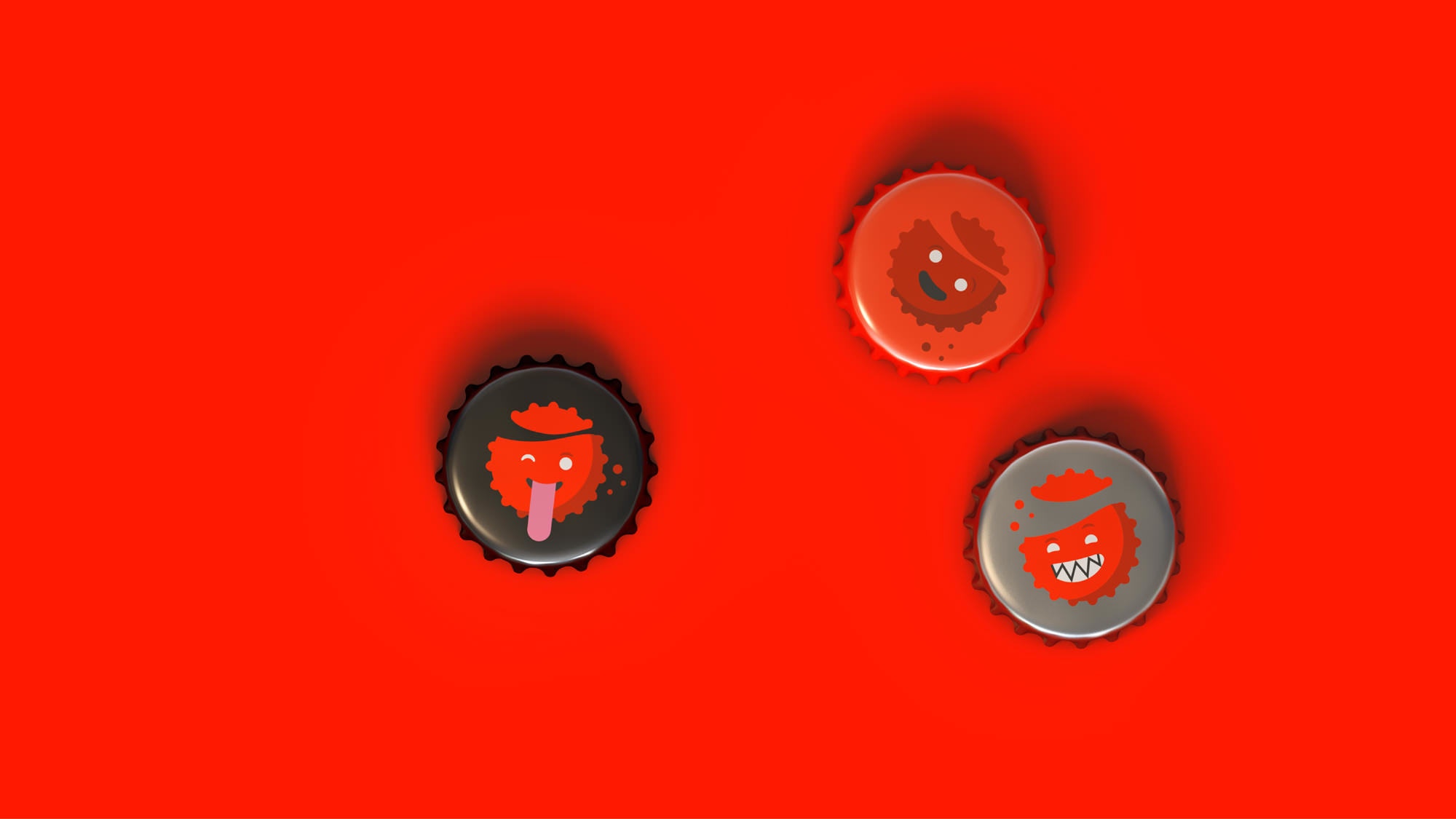 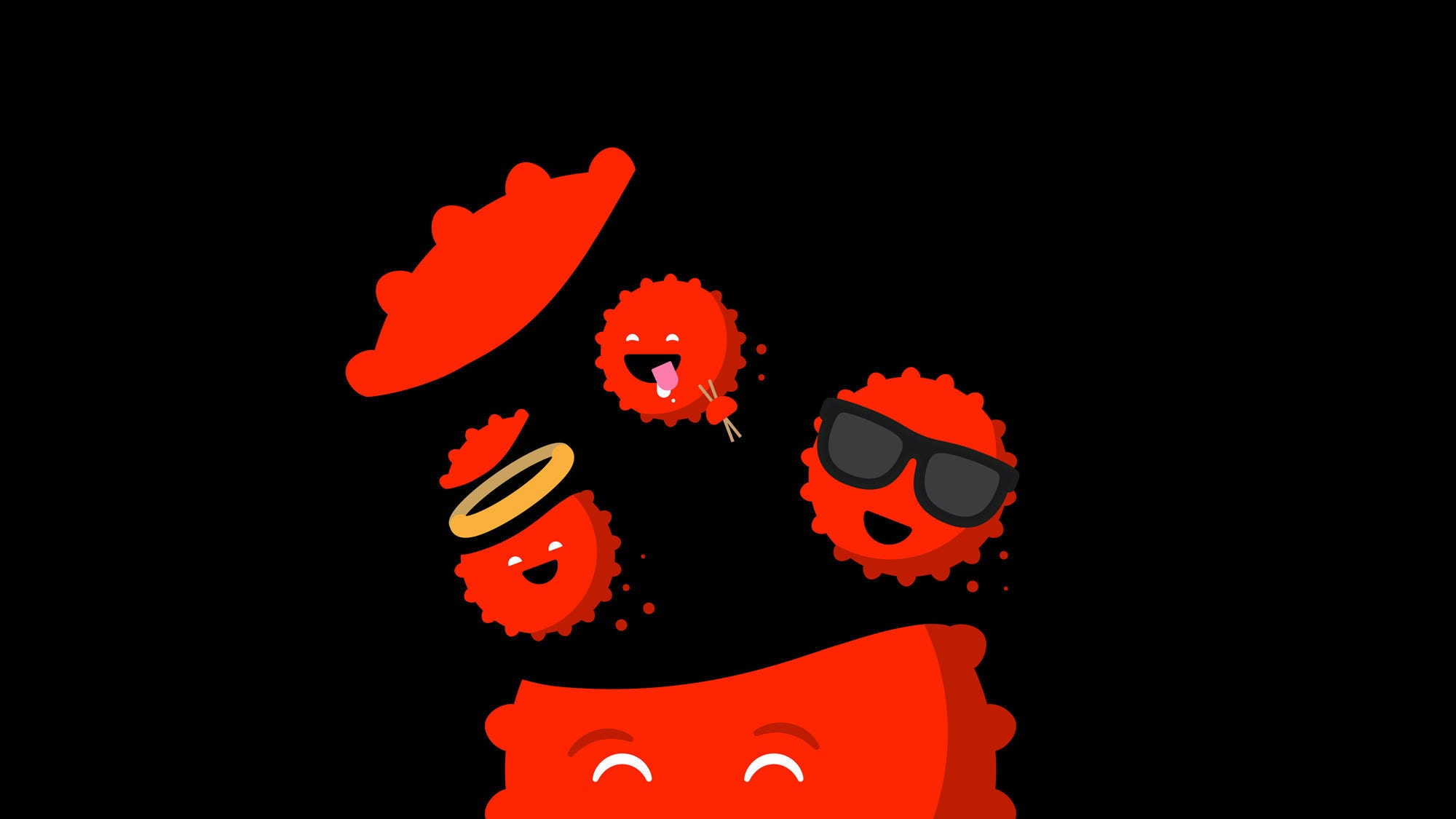 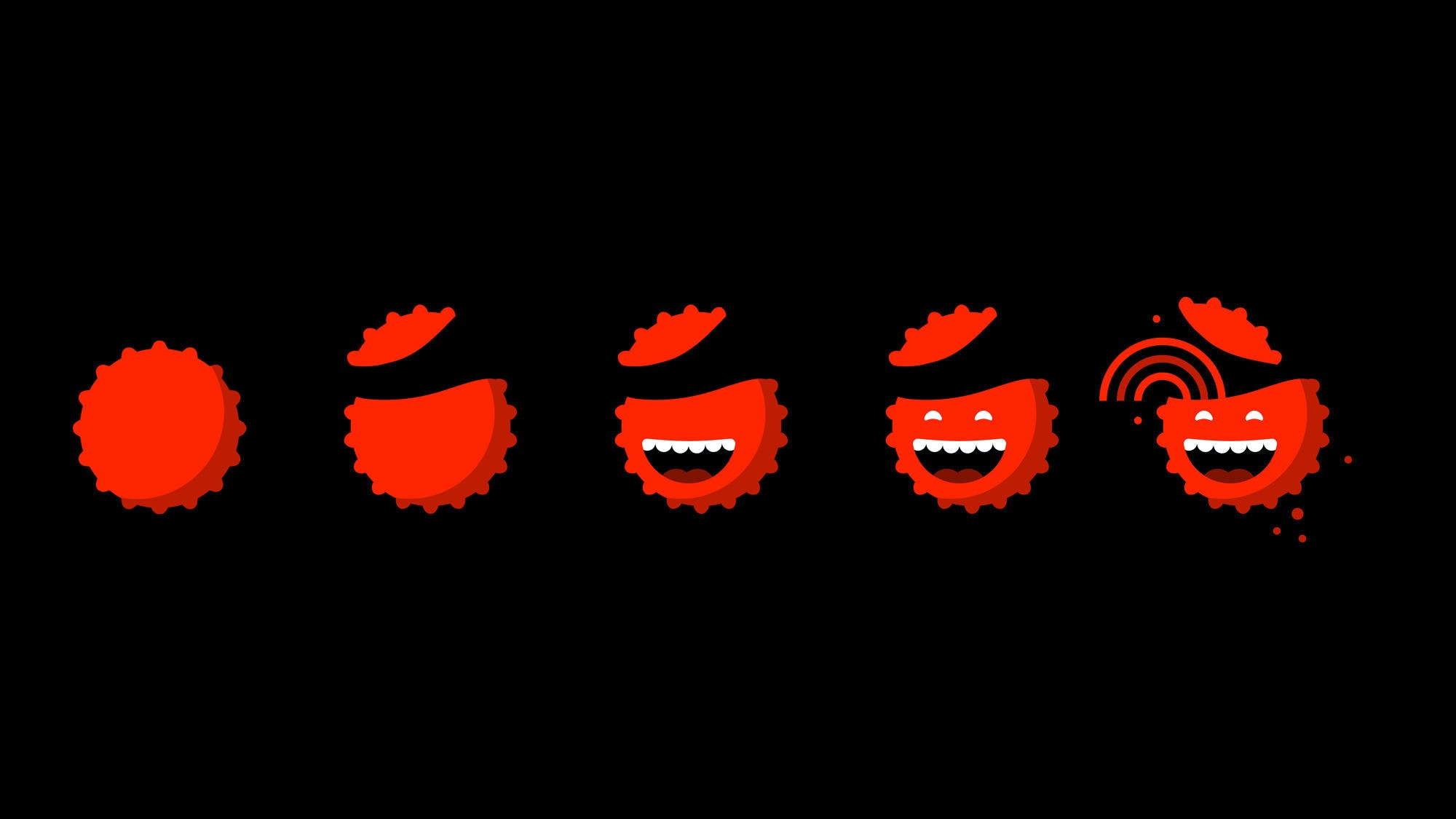 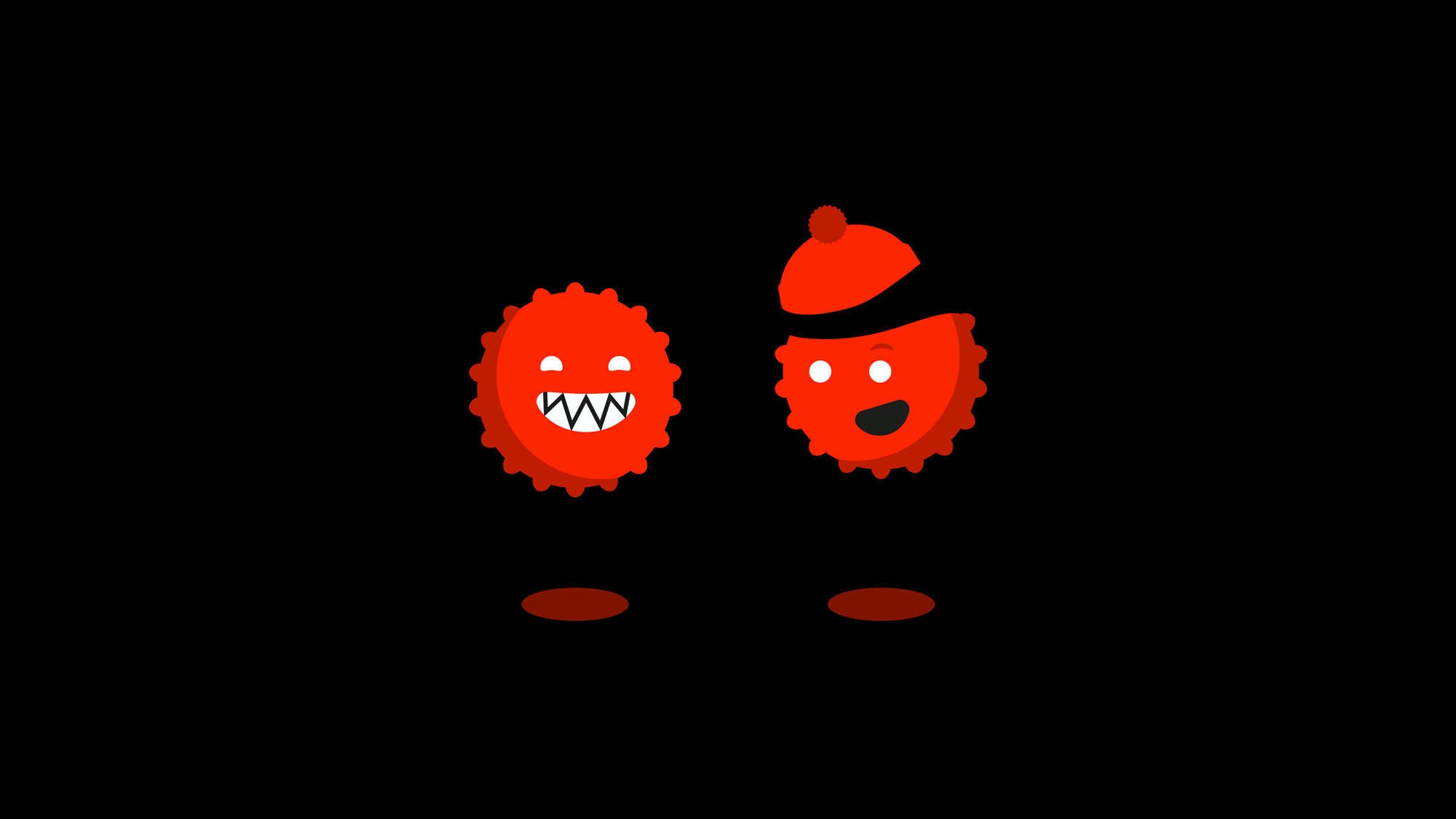 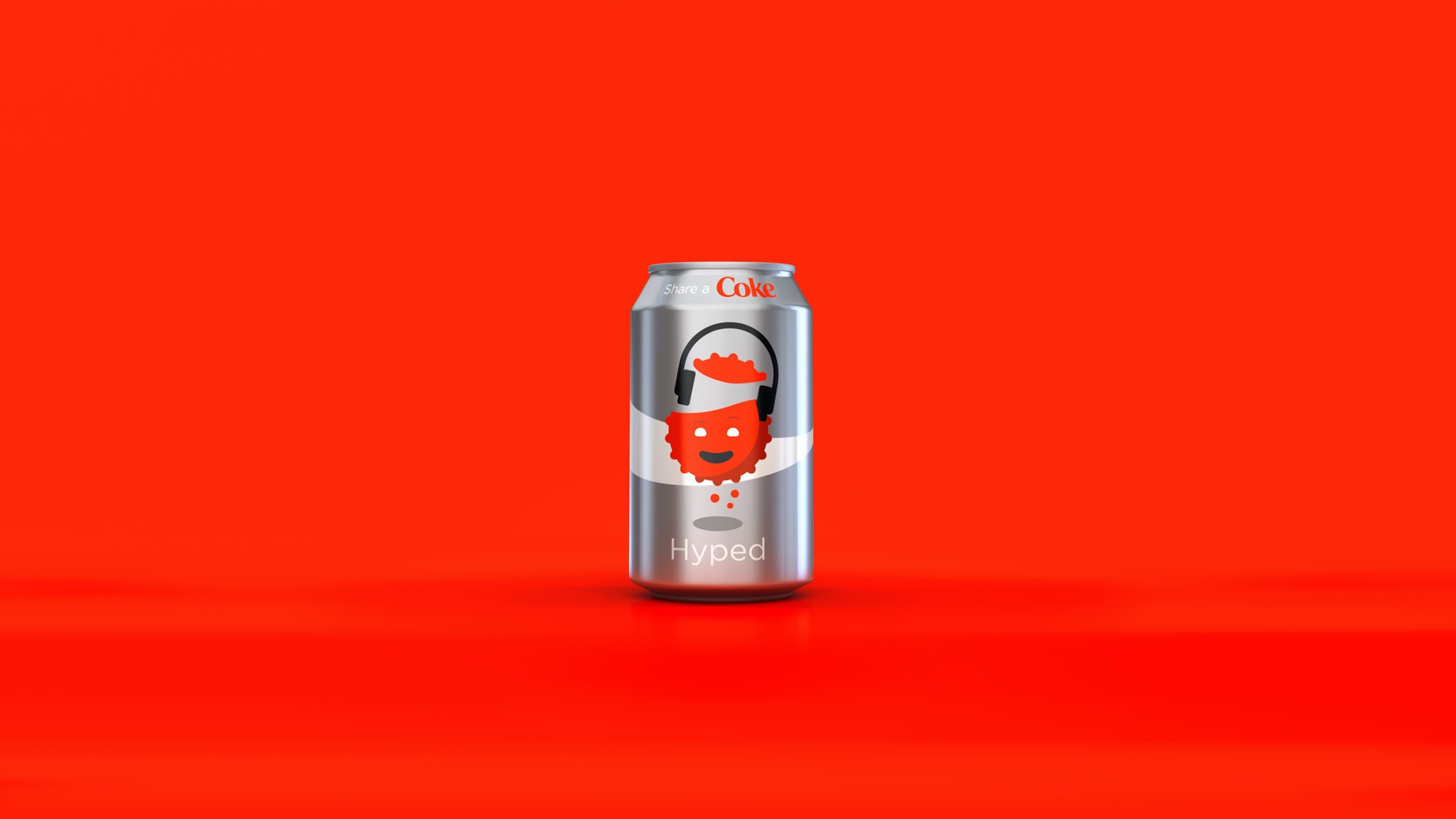 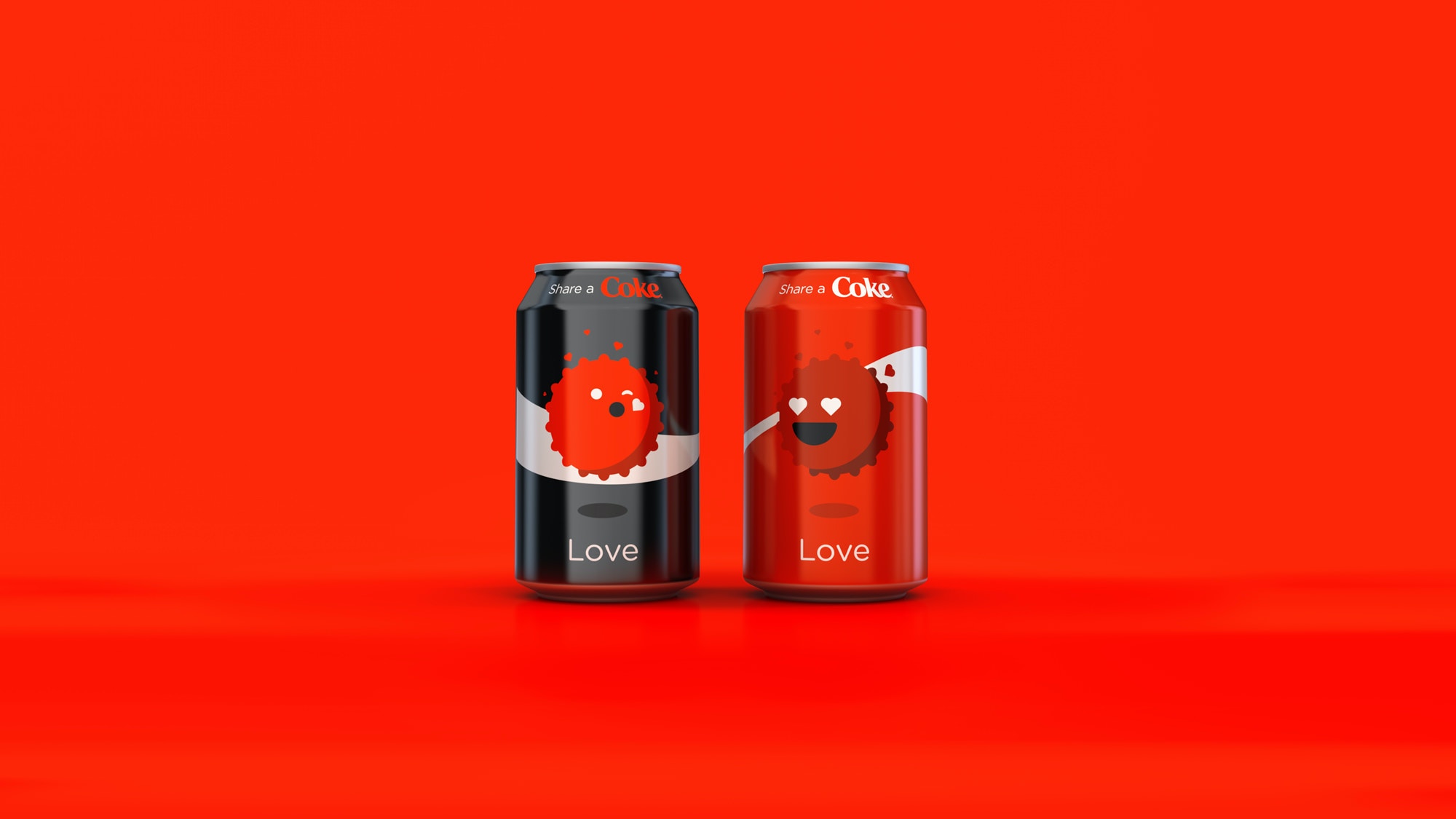 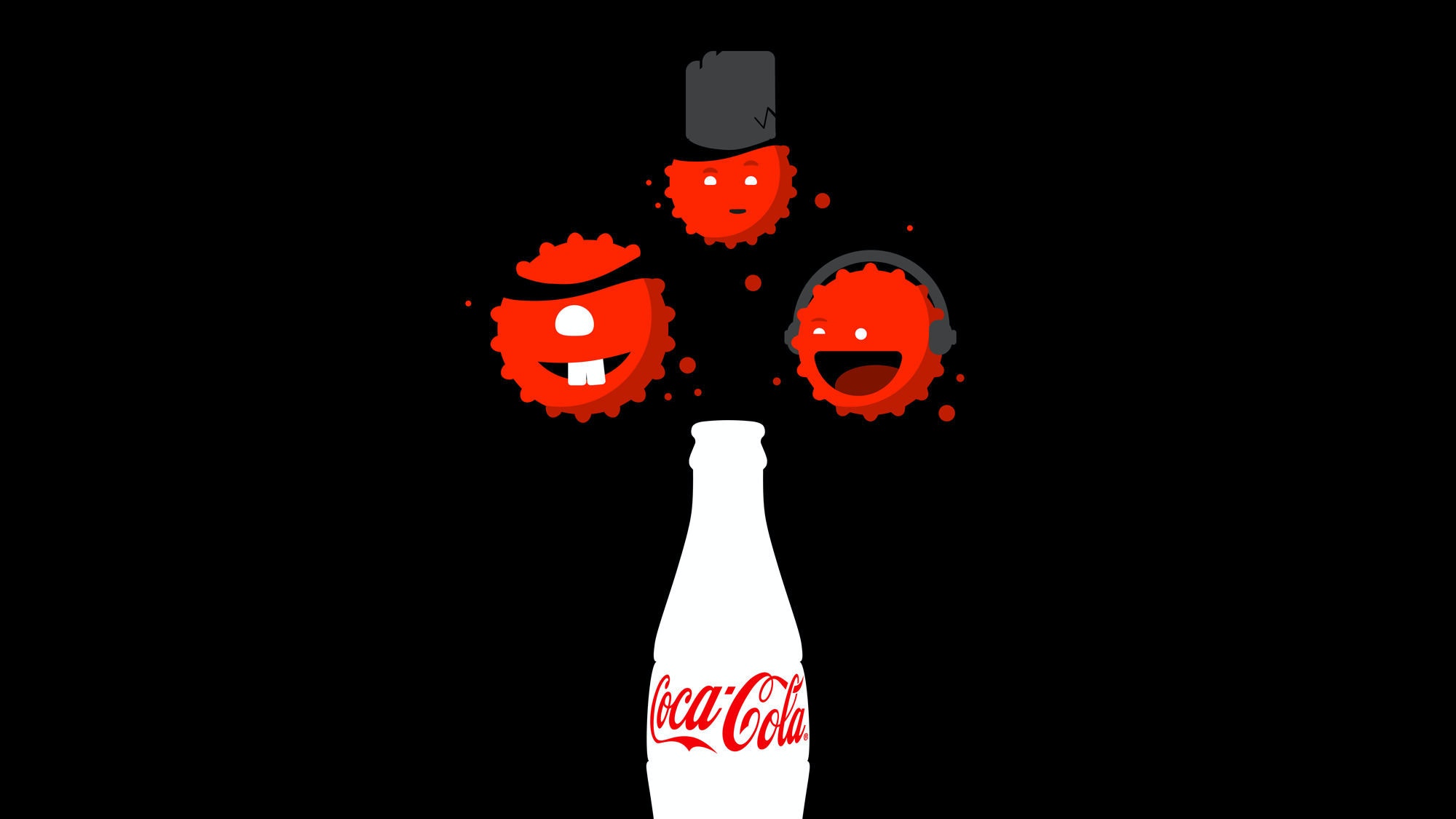 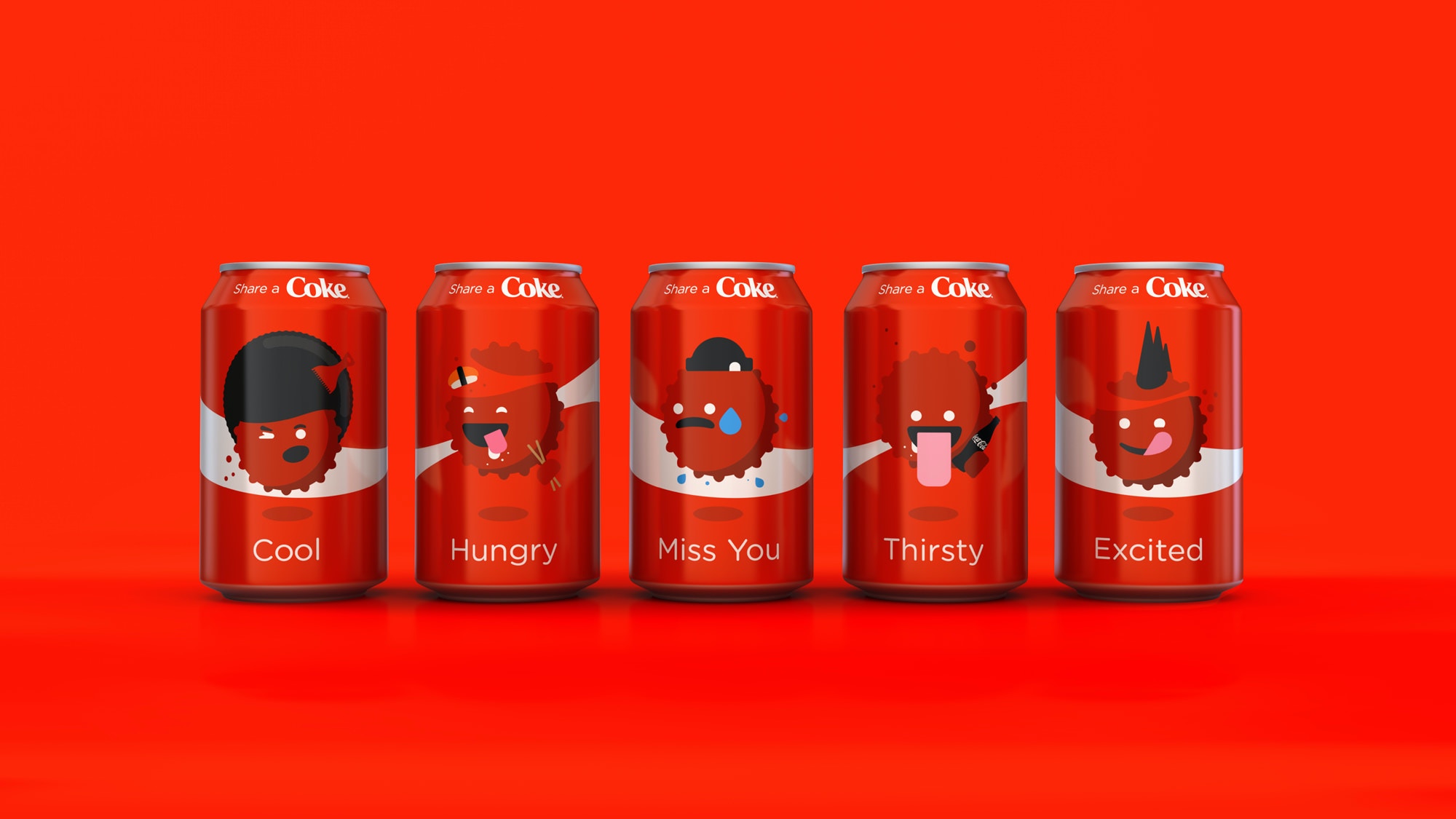 How did the team dynamic work throughout the project?
This was a project which came in the early stages of Koto so our roles were a lot less formalised than maybe they would be now. As the project progressed one clear route was chosen so James and Jowey worked into the specifics with Jowey taking the lead drawing out the rules and character basics. Throughout the process we worked with the design team at Coke sending work back and forth and sharing our collective ideas. They had a lot of work around emojis in the Coke brand already completed so we lent on that with what to work on and not. The relationship was managed equally by the three Koto partners Caroline, James and Jowey. In terms of final calls we are a pretty democratic studio where everyone gets heard and our thinking often converges but James and Jowey get the final call on everything that heads out the door. All studios need a decision maker or two at the end of the day to keep the velocity.

How regularly are you presenting to the client?
We did five rounds of creative from first ideas to delivery across 24 days. We didn’t work every day as some days we were waiting for feedback from various stakeholders. Coke work in a very collaborative way and even though they were in Atlanta and us in London we talk really regularly using Email, Phone and Video Hangouts. On this project we hit an idea that was universally liked early on, so it became very much about working into every detail in increasing intensity. This was aided by quick back and forth to aid velocity.

How has the client relationship evolved?
Since this project finished we’re delighted to have become a global partner agency with Coca-Cola working on a number of their brands. Our relationship with them was established during this process and goes from strength-to-strength. It can best be described as a collaborative and quick process. We create design solutions and share them digitally for iterative design and feedback sessions often on the phone. 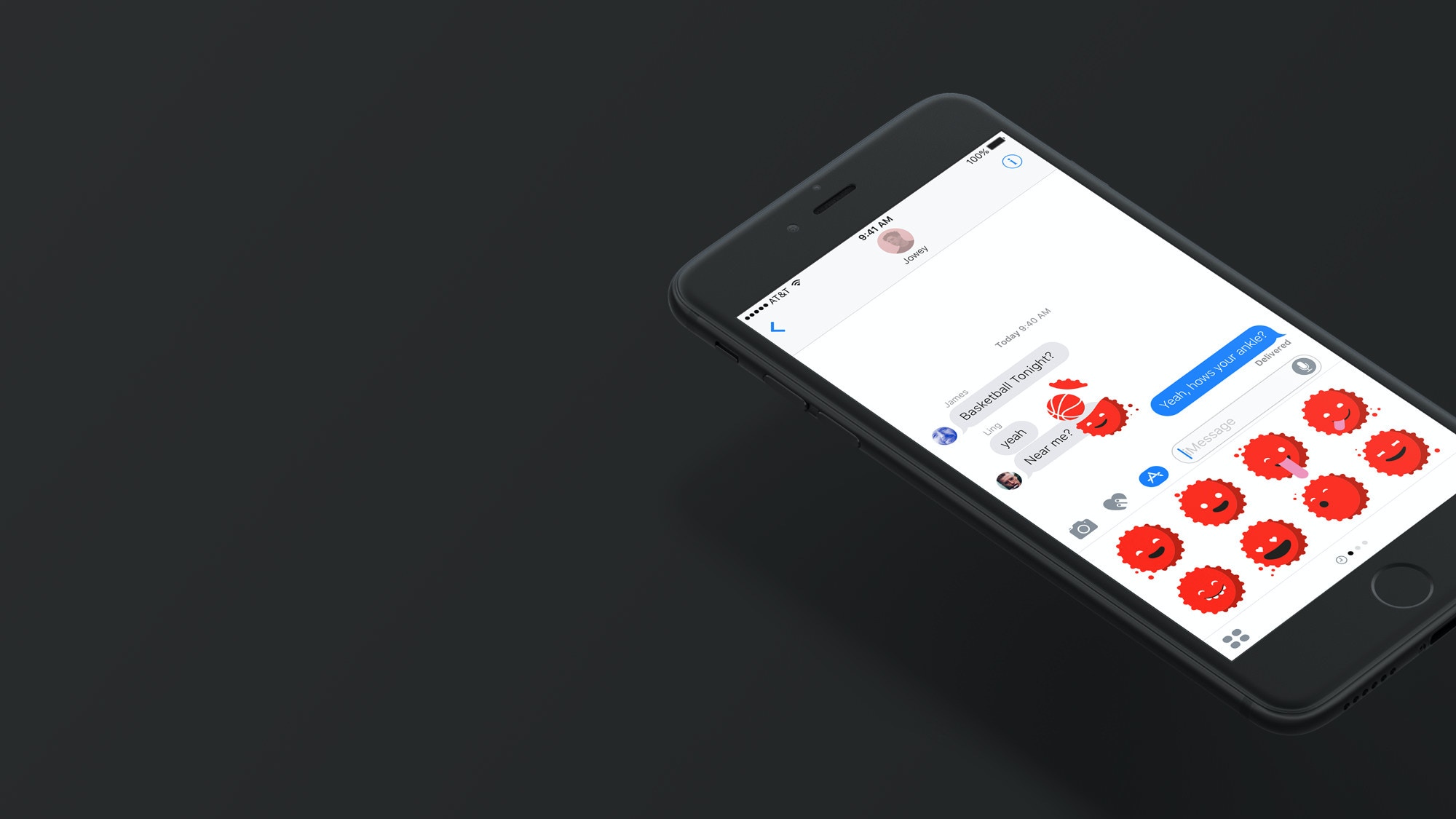 How is the project delivered?
We created an agreed 38 final emojis in a design guide for Coca-Cola global to take and use within their markets where required. Each market takes them as a starting point, making them work as they see fit.

What were the biggest challenges associated with the project?
A lot of people had worked on the project before us and they had identified a key issue to overcome. This being the tension between it being a recognisable as an emoji and on brand for Coca-Cola. Most creative projects require a balance between differing needs, but this one was very tricky. As well as this it being for a global audiences added an extra level of complexity. We didn’t want it to feel like emoji’s just made red.

How do you judge the success of the project?
The success for us is after them being released to the world is seeing it used on product globally. Close to home we’ve seen them on the London Transport network gauging how happy London is. Further away friends have sent us Snapchat’s of them enjoying an emoji adorned can on the beach in Thailand. Market’s feeling they will work in their market and their millions of customers, that’s success for us. It’s easy to design nice stuff for niche markets, but designing brands for the eyes of millions of customers is where the tough challenges lie.

What are the results? How do you define these.
Some of our projects have clear binary metrics we can look at, increase in visitor numbers, more customers. In this case the results are we cracked the brief and the results are being used. Plenty of brands have tried to make their own emoji sets, many have failed.

Alexander James Wood on his first year after graduating

Inside Made Thought, the London design studio prizing ideas above action