In the Studio With — Blink: The production and talent powerhouse set in a converted tram shed

Set just off a bustling Holloway Road in north London, production company and creative studio Blink has found a home in a former tram shed. A bright, airy space with many of its old industrial features, its open-plan layout allows for collaborative exchange between both teams and company divisions. Originally founded in 1985 by Bob Lawrie, Blink has since grown into many more individual companies – all fluidly crossing over in a supportive and nurturing environment. Until last year, the entire team were based in their Soho office, where the original arm of the company has remained, specialising in live-action production.

The other divisions are now all sat under one roof in the Tramways space in Holloway, comprising animation specialists Blinkink, illustration and photography agency Blink Art, entertainment and development studio Blink Industries, and music management company, Major Tom. From intriguing music videos to characterful commercials for Channel 4 and the BBC, much of their work shares a fun irreverence that can be felt across the company itself, and has attracted awards from the likes of BAFTA, Cannes Lion and the British Animation Awards. Executive producer Bart Yates tells us about the company’s past, present and the future-facing initiatives that help keep it evolving.

Up to 50 additional team members are freelancers (including editors, researchers and producers) and creative talent (from directors to illustrators and photographers). 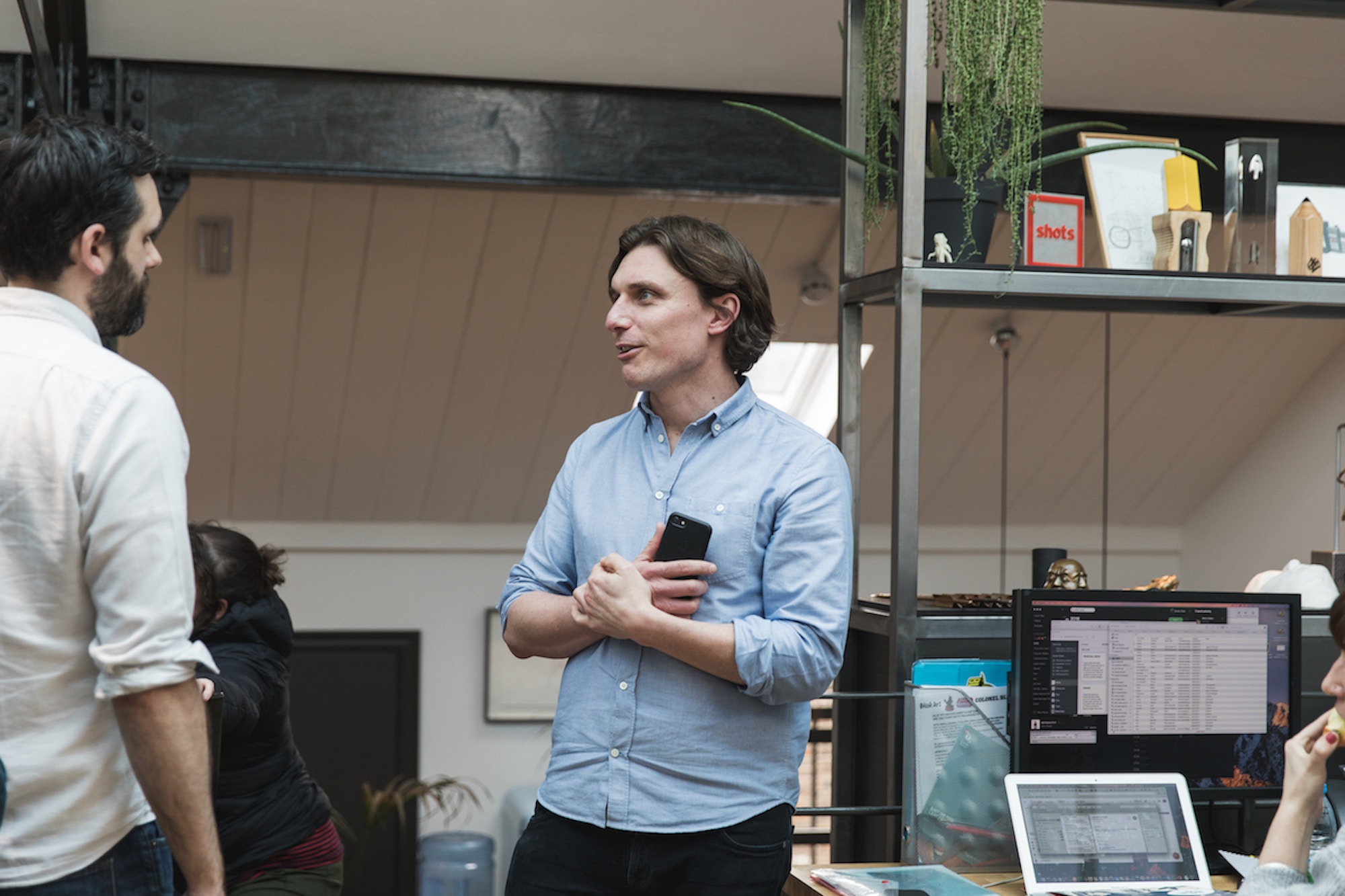 Blink was started in 1985 by an Australian animator called Bob Lawrie, and shortly after James Studholme, who is now Blink’s chairman, joined as a producer. For the first decade or so it was mostly an animation company. It’s amazing when you look at their ’80s and early ’90s, stuff, as it’s all pre-computers: weird and wonderful MTV-style stop-frame and 2D work. But as they evolved, they moved into more live-action work, as did their directors.

When I joined, Blink was just a live-action production company, but soon after we started signing some really interesting animation directors, and in 2005 we decided to start Blinkink as our animation division to represent them. Blink Art was founded after that, as our illustration (and now photography) agency. The reason for this was that I’d find myself at agencies hearing of people needing illustrators, and I’d think, ‘My animators could do this’, as most of them were also great at illustration. Since people wouldn’t think of an animation director for this kind of work, we started to divide the companies so that people got it.

“All the Blink companies feel very fluid and connected; we’re always helping each other out.” 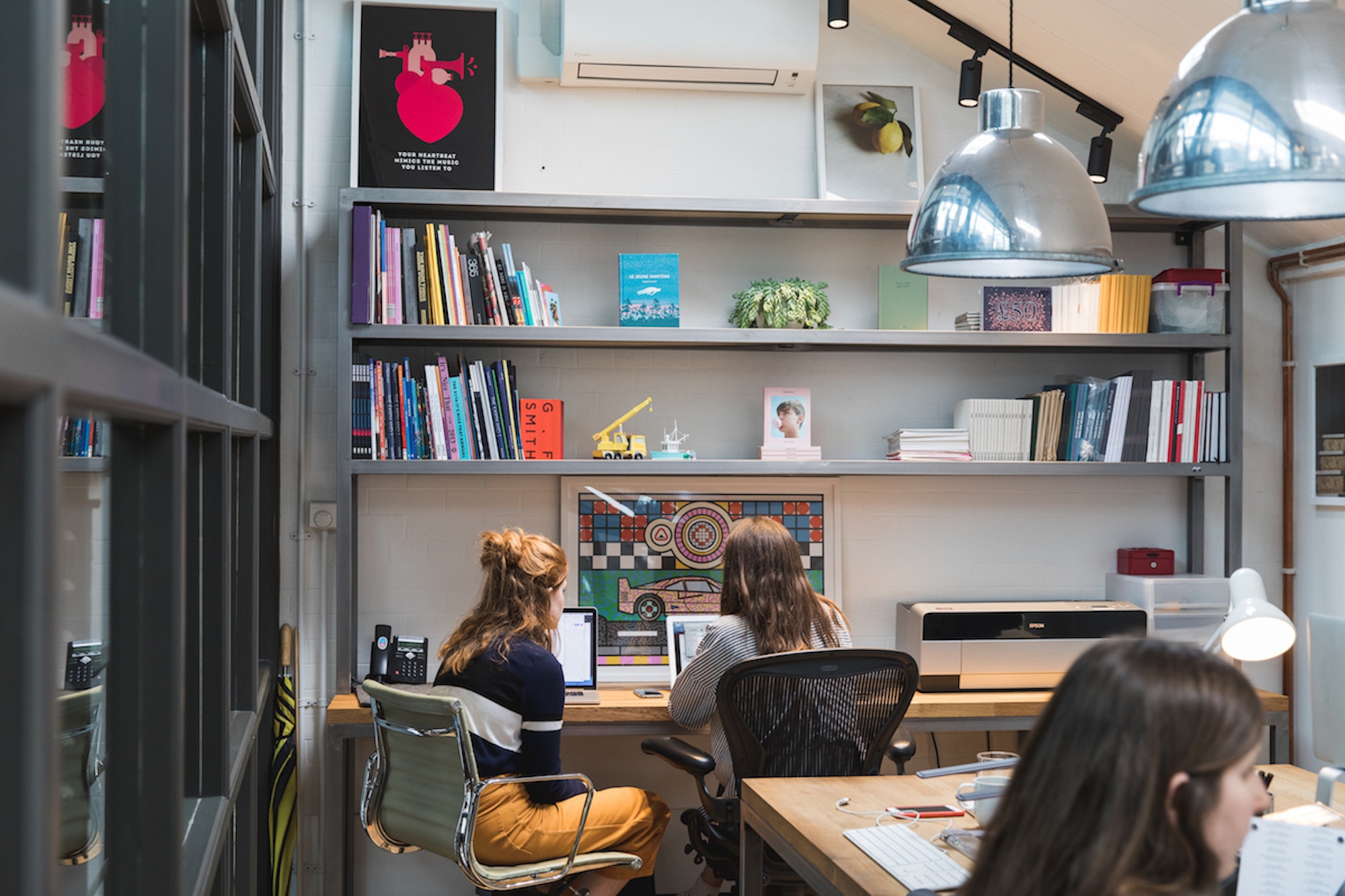 Another division, Major Tom, is our music supervision, recording and management company, and was started around nine years ago. We were all really into music, and were thinking it’d be good to have this element within our network. Then Blink Industries grew out of the Blink family a couple of years ago. That was about having directors who wanted to tell more substantial stories, beyond commercial work and short-form pieces. One of the exciting projects to come out of this will be Becky and Joe’s series Don’t Hug Me I’m Scared, for which we are in the process of shooting the pilot, which will be our first long-form project.

All the Blink companies feel very fluid and connected. We support each other where we can, and that really comes into its own with self-initiated projects. We talk about the virtuous cycle here, which is where you make your creative work (that could be a short film, music video, an art projects or even Instagram posts), which in turn brings in the commercial work. We keep that going by investing in our artists – putting money back into something super-creative. 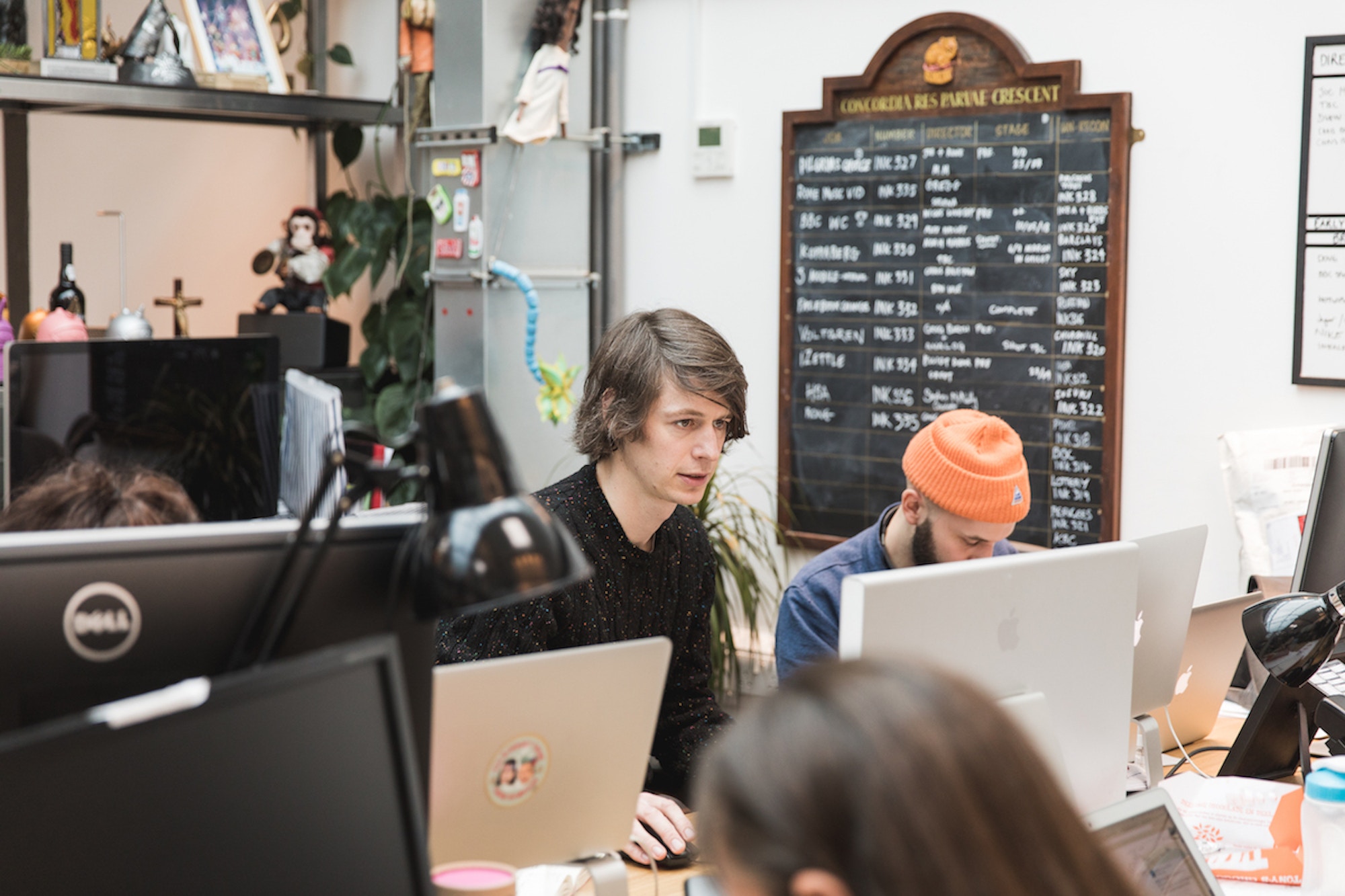 As the executive producer at Blinkink and a partner of Blink overall, I am involved across the company to varying degrees, but my day-to-day focus is on the vision and oversight of Blinkink. I will scout and develop many of our directors, and then find projects for them, going into ad agencies, record companies and brands, and think about how we can turn those opportunities into actual productions.

For me, the most exciting projects of the past year have been the BBC Christmas film ‘The Supporting Act’ – we were really proud of that one – plus The Great British Bake Off commercial for Channel 4, and a music video for the Gorillaz. And then within Blink’s wider network, we’re really happy with a Jon Hopkins video we made with Rob Hunter, who is amazing. He started out as an illustrator with Blink Art, but has developed his remit to include animation and directing, and this piece was created alongside fellow director Elliot Dear. We’ve also been working with a brilliant director called Pedro Martin Calero for the last couple of years, and he’s now making the transition from creating super-weird music videos to big, beautiful commercials. He has a very unique and distinct vision.

One of the fundamentals of the business is that we are a talent manager, basically like an agent, but we also do project management and production. In terms of the creative talent – from photographers to directors – they exist within separate companies, but you get crossovers between them all. For example, you might have a project where a Blinkink animation director works with a Blink Art illustrator to design the characters. Or it’ll be a live-action director collaborating with an animator.

“One of the fundamentals of the business is that we are a talent manager, basically like an agent, but we also do project management and production.”

Most of the artists we represent come from a traditional background within their field, but by offering opportunities in other areas they get the chance to see where they want to develop and progress. We’re very interconnected, so everybody can move seamlessly between the divisions and feel encouraged by the Blink family through that process.

One of our internal studio initiatives, Blink University, has been set up for our directors as we work on more longer-form entertainment. The initiative is about getting directors to work together to help one another in developing a self-initiating skill set. With TV or film projects there’s often a lot of pitching involved, so it can be quite lonely and disheartening, so this provides a supportive network.

Creative companies can be structured in different ways; in smaller companies everybody helps on everything, while in bigger ones you might have a more rigid process that ends up shaping the creative. We try to sit somewhere in the middle of that, as you want the ideas and creative to lead the work, rather than the other way round.

Everybody here is self-sufficient in doing their own thing and making good work, all with their own sense of purpose. We’ve never made a conscious decision to grow certain parts of the company; it’s happened organically, when somebody who we trust and believe in has wanted to do something. If it’s an idea for a new division, that person will start it up and lead it. A lot of our company mission comes from a desire to see all parts of the business doing well, and everyone takes pride in each others’ success. In that sense it’s a very unified experience.

“We’ve never made a conscious decision to grow certain parts of the company, it’s just happened organically, when somebody has wanted to do something.”

In total we are around 100 people at Blink, including talent and freelancers, but about 55 are full-time. Depending on what day it is, over half of our workforce can be freelance. If we’ve got three film or animation shoots going on, then that number can go up to 90 percent. Our represented directors will also come in to work here, so at any given time we might have 20 Blinkink directors working on five separate jobs. 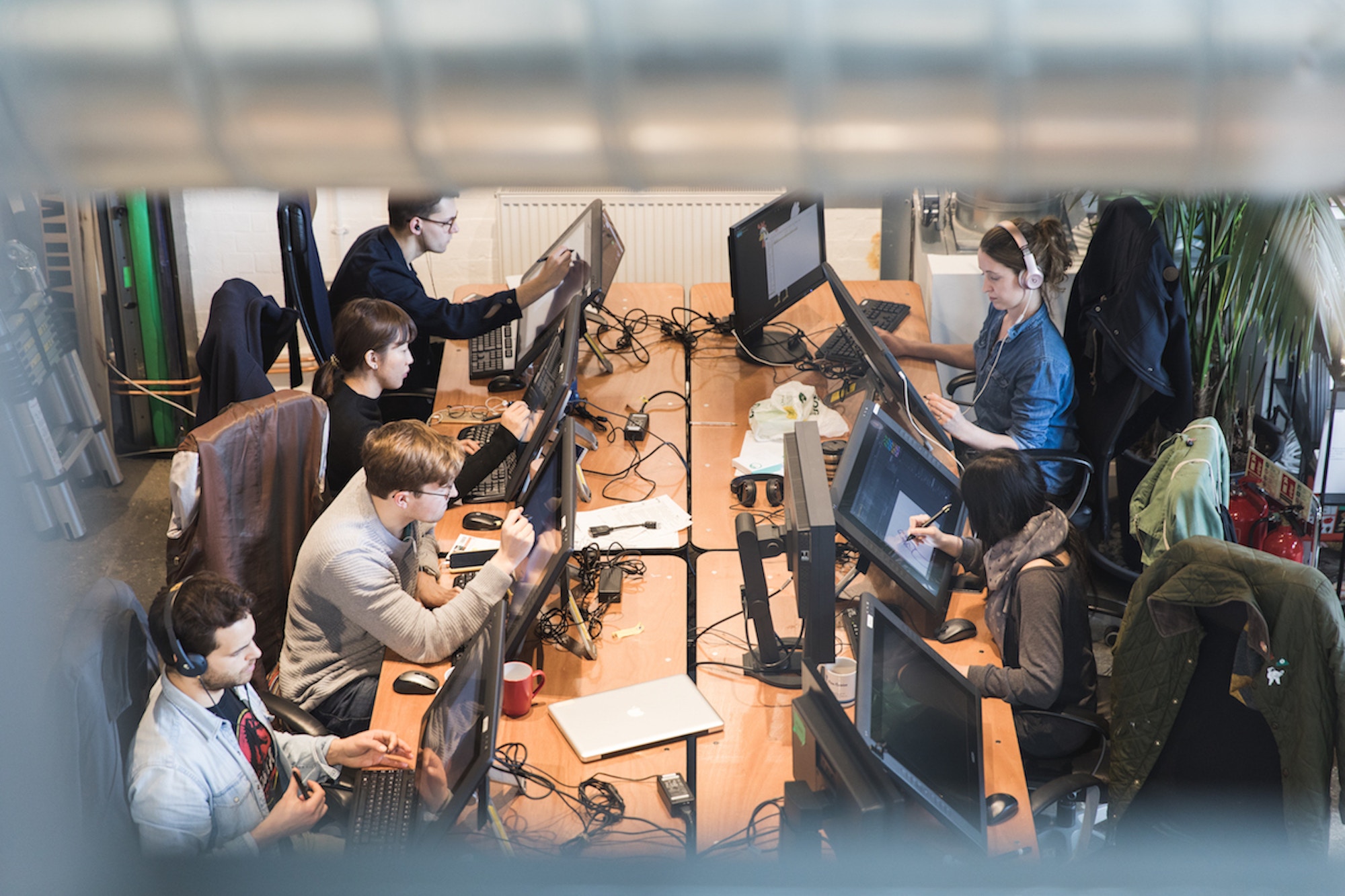 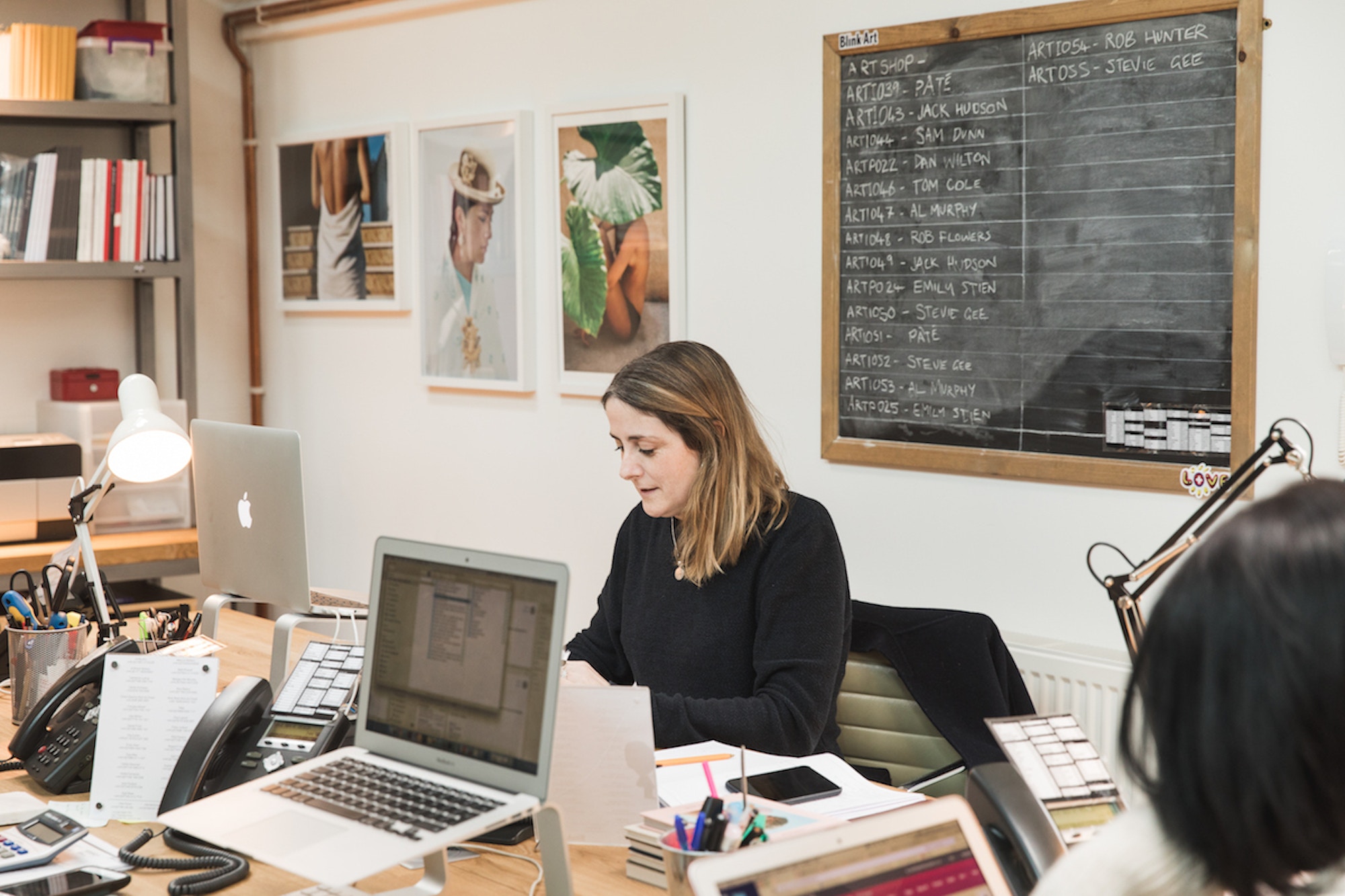 We run paid internships in the studio, which each last for one to two months, and then if they get on well, we’ll often hire them. We usually have three interns, as well as one or two people on work experience at any one time. Then in terms of entry-level jobs, running is a great way to start out, because it’s a fantastic way to see what everyone does, how the teams work and what opportunities exist. Some runners come in and realise they want to work as a producer, and others will want to be in the art department. Then after a year or two they’ll have been introduced to the right people, and it helps them find their direction.

Researching is another great job to start out in here. Film treatments have become the norm now, and they can be quite elaborate, like magazine layouts with beautiful pictures and evocative words. A lot of directors like to work with a picture researcher to create these, so this is a good role for someone who wants to be a director eventually. It helps in understanding how to communicate concepts and aesthetic in a succinct, evocative way. 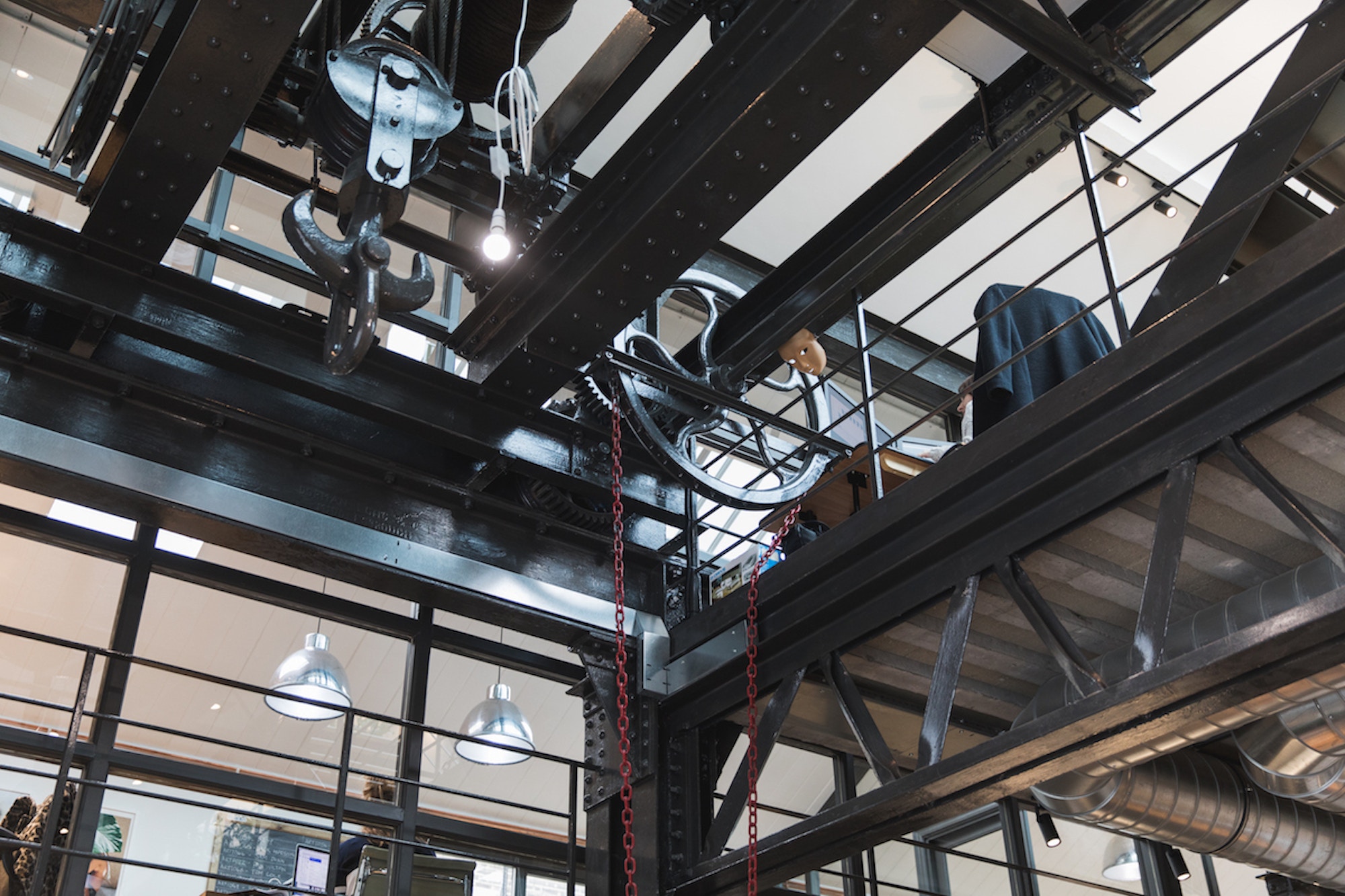 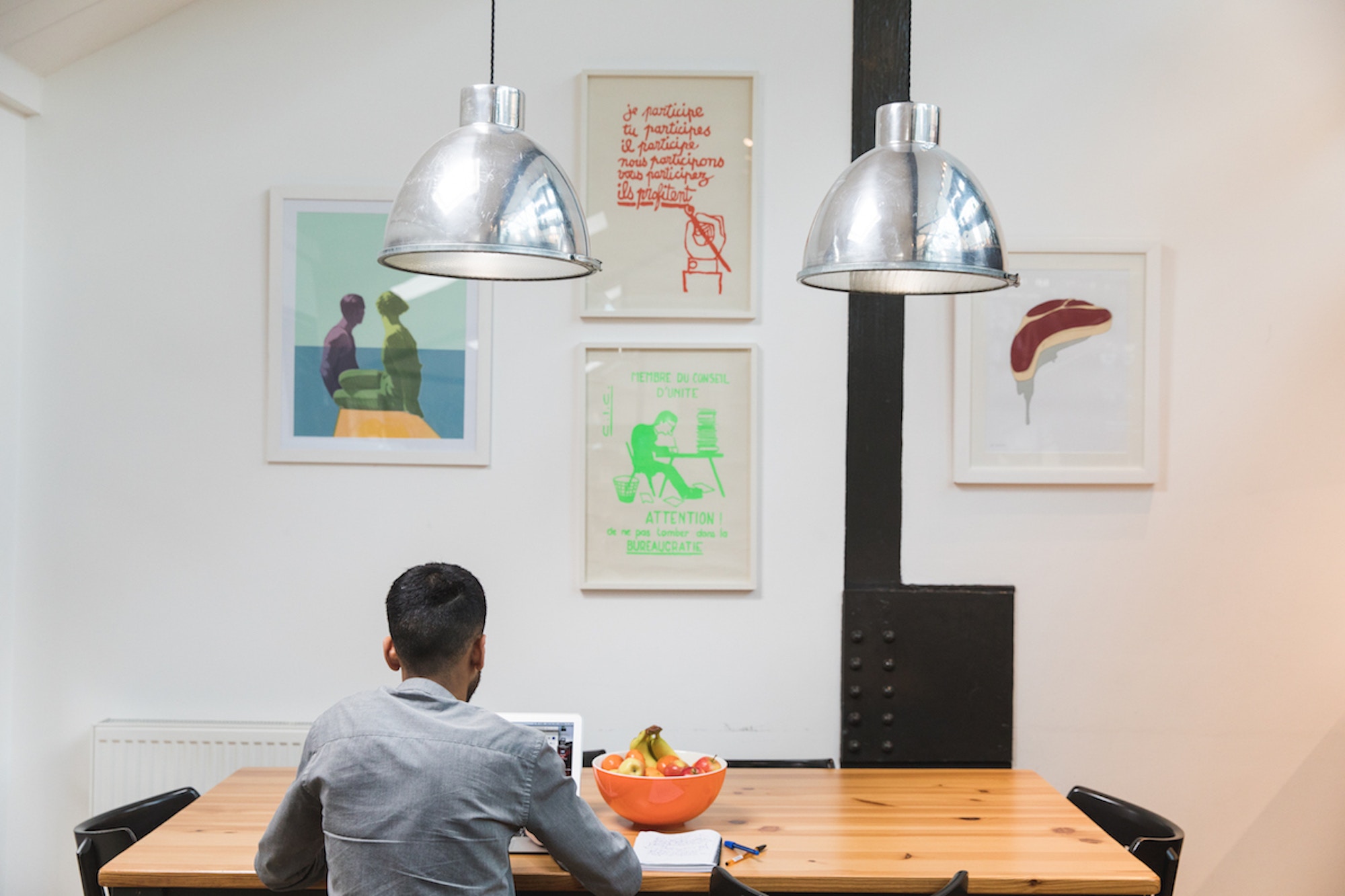 The Environment and Culture

The Tramways space is quite airy, green (we like our plants!) and feels spontaneous. Downstairs we have a space for shooting animation or castings and rehearsals. It’s nice having that kind of flexibility, as it imbues a creative feeling to everything. We also encourage our directors to fill the walls with amazing artwork and ideas when they’re working on a project, so the team can be fully in the zone for the duration of the project.

Blink’s live-action division, which also acts as head office, is separate to Tramways and based in Soho. Most of the management team are there, meaning I’m the only person from upper management at Tramways. But we all get together for a big company meeting every couple of months, when everyone does a show and tell about what they’ve been up to. Then we have two meetings every week in Soho or Holloway to share updates and ideas.

“If you create an environment where people are rewarded for their own initiatives, that’s the best benefit of all.”

We’re generally a very nice, supportive family and company. In terms of holiday it’s quite standard, and we don’t have a fancy canteen, but it’s an environment where people are rewarded for their own initiatives and what they’re making each day. For me that’s the best benefit of all, and it’s what keeps people working really hard. This comes from having your own self-expression as a creative person, and putting your own stamp on something. For us it’s about creating a space where people can take that ownership. 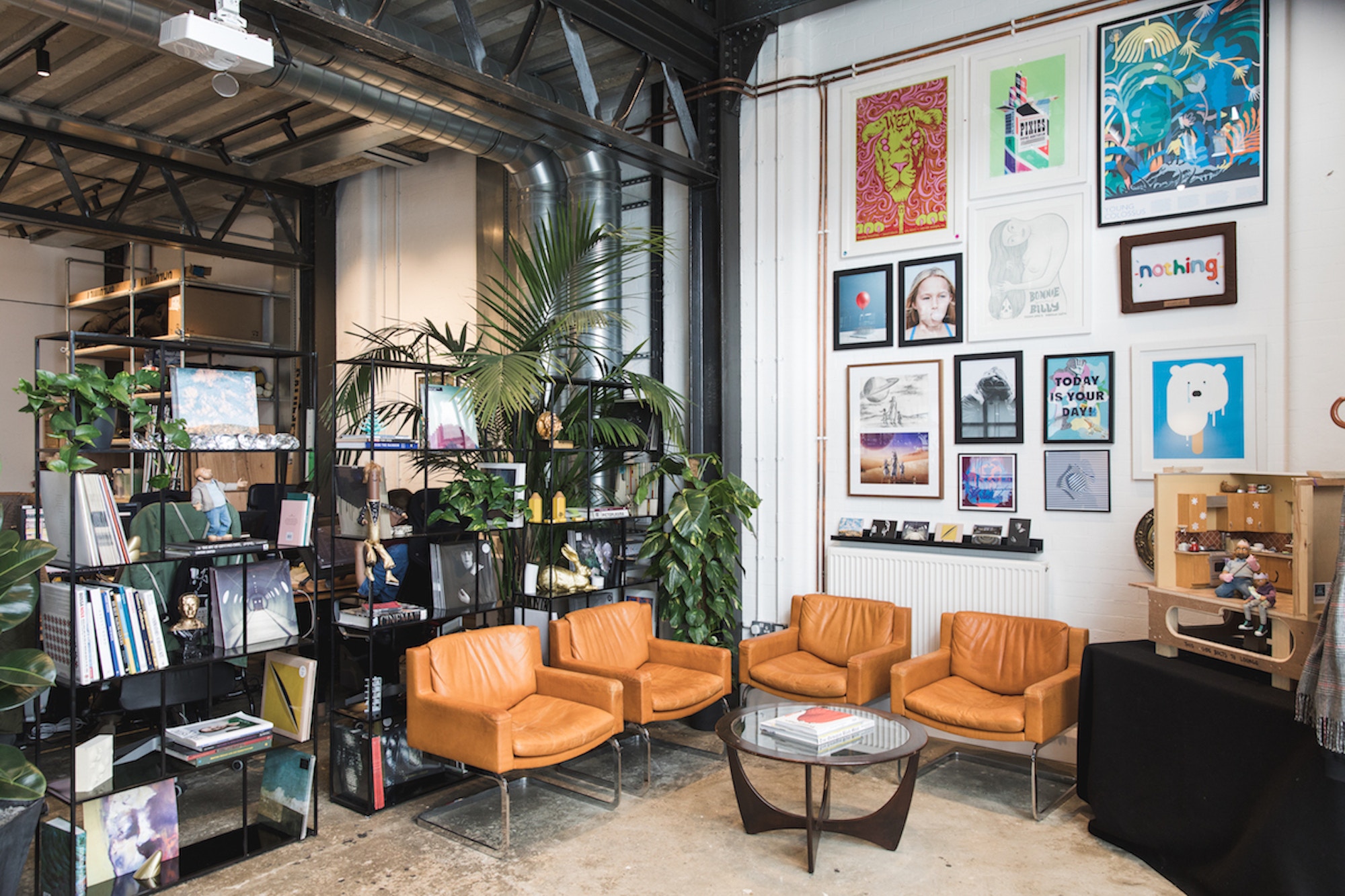 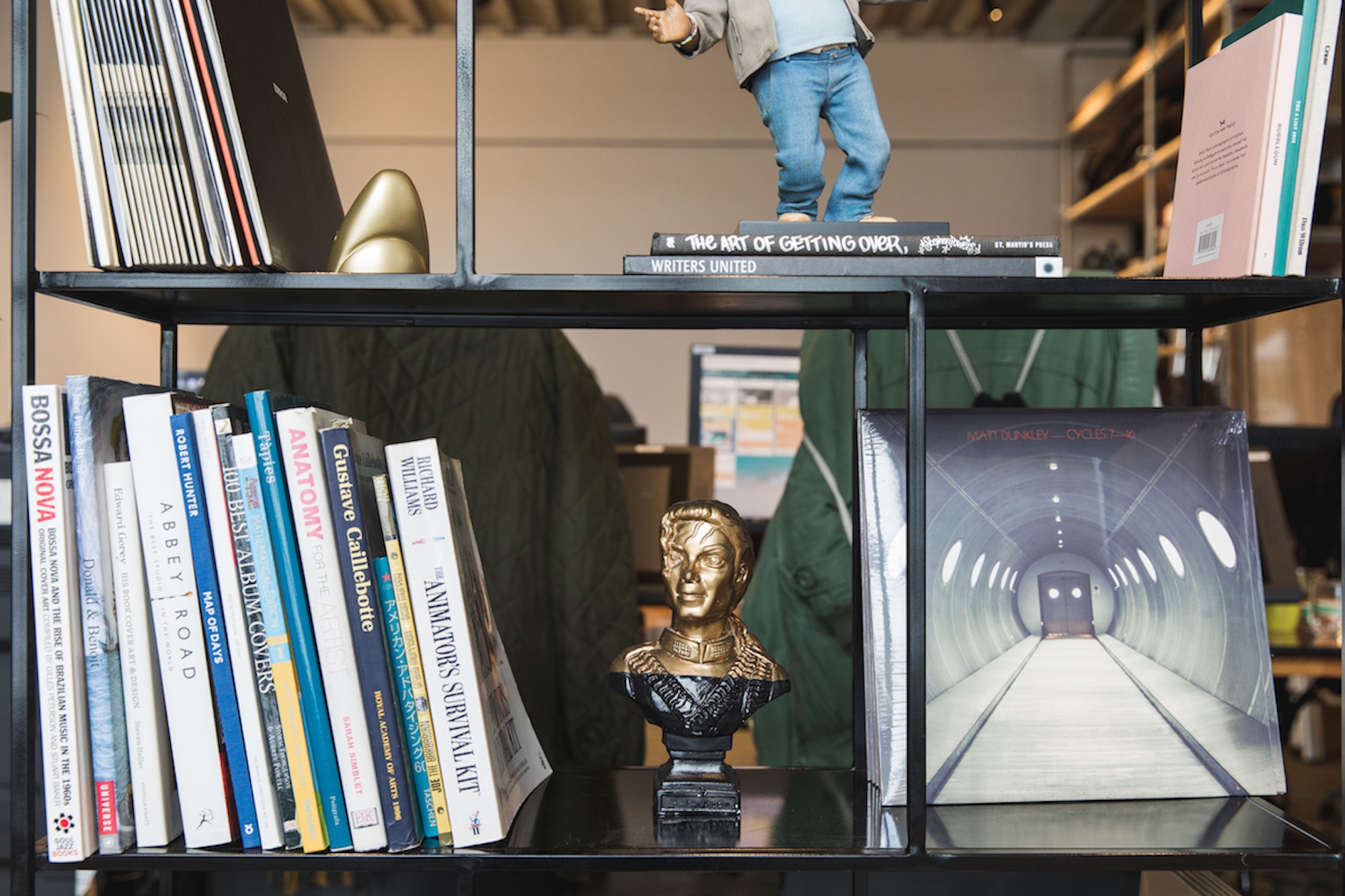 D’oh! How to laugh at and learn from creative mistakes

Where do you start as a freelancer? 14 creatives share their first-time tales