If urgent funding isn’t received, The Modern Slavery Helpline – an anonymous hotline that has been running since 2016 by the anti-slavery charity Unseen UK – will be disconnected on November 30. A devastating and pivotal date in the calendar that, if in motion, will cause catastrophic effects to those in need. So, with an aim to save the helpline and raise £800,000 for the charity, Aesop Agency took to the challenge in order to drive awareness to the crisis.

Showcasing a sheer passion for the cause, the team proceeded with an absent budget and set about creating an artistic campaign inspired by Instagram poetry – a project fuelled by a typographic identity, building projections, as well as demonstrating the impactful narratives told by the trafficking victims. Here, Jonty Harbinson, Aesop’s creative director, tells us how the #UnseenStories campaign came together.

There was no budget for this project – it comprised of external investment we sourced and a lot of after-hours work.

Our aim was to help raise £800,000 for the anti-slavery charity, Unseen UK. The Modern Slavery Helpline will be disconnected on the November 30 2019 if urgent funding isn't received. Therefore, the brief was to drive awareness of the crisis and gain donations for the helpline.

The life-saving-work of [Bristol-based charity] Unseen helpline fights for the eradication of modern slavery and trafficking in the UK. It’s estimated that there are tens of thousands of victims in the UK alone, of which 25% are believed to be UK nationals.

In 2016, Unseen launched an anonymous hotline which now takes over 150 calls a week; this line is vital to finding and saving victims every year. So when Andrew Wallis (CEO of Unseen UK and long-time friend of our agency) told us that it was under threat due to budget cuts, we were determined to highlight the crisis in front of us. Unless funding can be found to keep this life saving line open, thousands of victims will remain unseen in our society.

“It’s estimated that there are tens of thousands of modern slavery and trafficking victims in the UK alone.”

For a creative agency that specialises in storytelling, this was an incredible opportunity to give a voice back to the voiceless. The concept behind the campaign was rooted in the fact that victims are often hiding in plain sight. People are desperate for help right in front of our eyes – in nail bars, car washes and even restaurants. But we don’t do anything, because we don’t know what we’re looking for.

In this case, the brief was simple: find a creative way to save the helpline. Due to time frames and the reactive nature of the project, creative and strategy evolved together in parallel which made it quite different to a ‘usual’ campaign brief.

Unlike normal creative processes, this idea very quickly developed out of the challenge. Perhaps it’s because it was a passion project, but we went from ideation to concept and client presentation in a matter of days. Unseen bought into the idea immediately and due to the fact that we’d set ourselves a hard deadline of one month – to coincide with Anti-Slavery Day – we were in planning and execution within a week of the initial idea.

Also, there was no budget for this project. That, without a doubt, was the most challenging part about it. The client was in dire need of funding to save the Modern Slavery Helpline, and although they were passionate about the creative, they were unable to offer any financial investment into the campaign. But as a team we knew this was something we had to make!

The budget was comprised of external investment we sourced and a lot of after-hours work. The gaps were filled by Aesop agency, who donated their summer and Christmas party budget to help fuel the campaign. Despite the challenges, it was never a question of “Should we do it?”. We unequivocally believe in the power of storytelling, creativity and the impact you can have when you design for good.

“We went from ideation to concept and client presentation in a matter of days.” 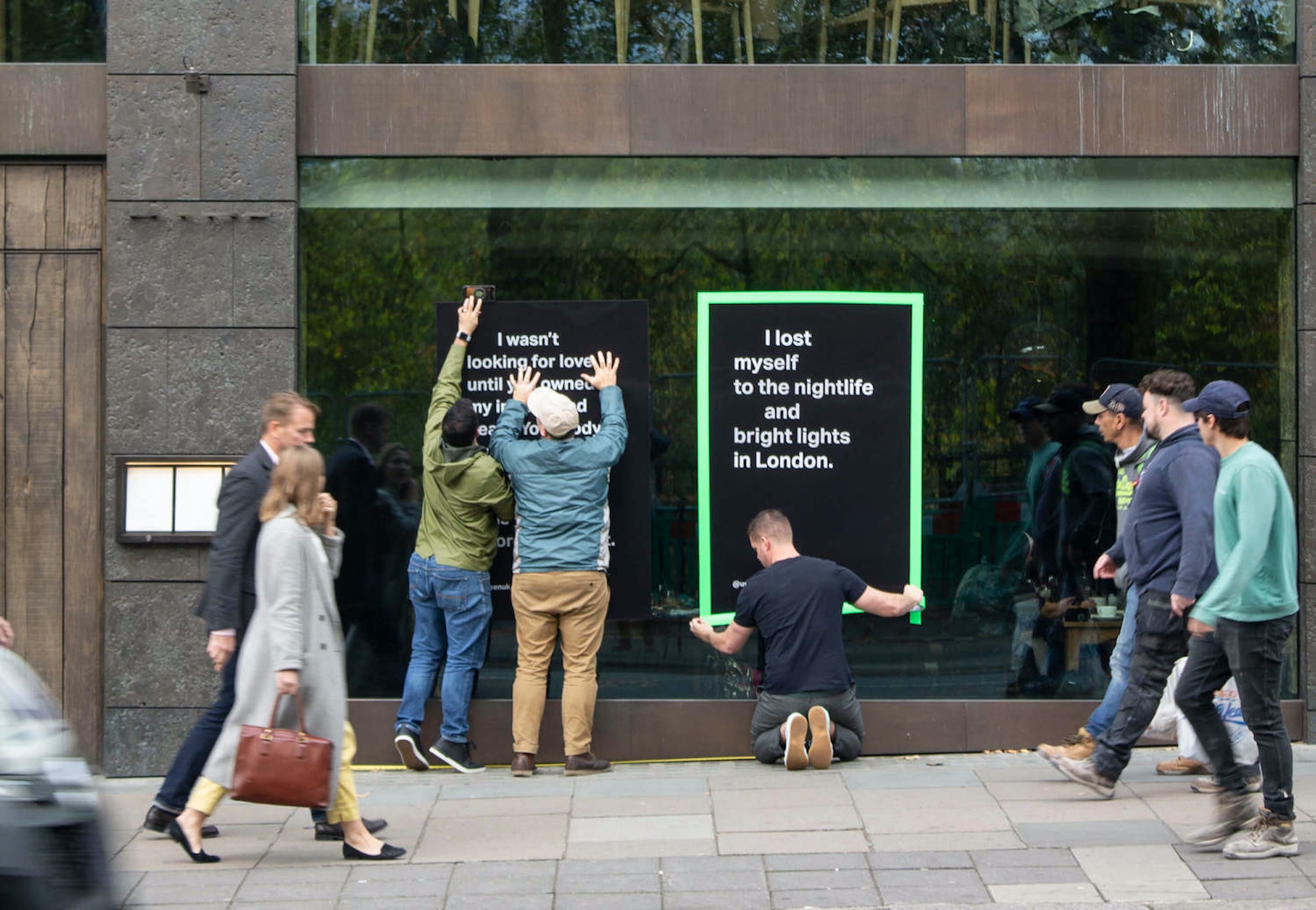 The posters at Hide Restaurant 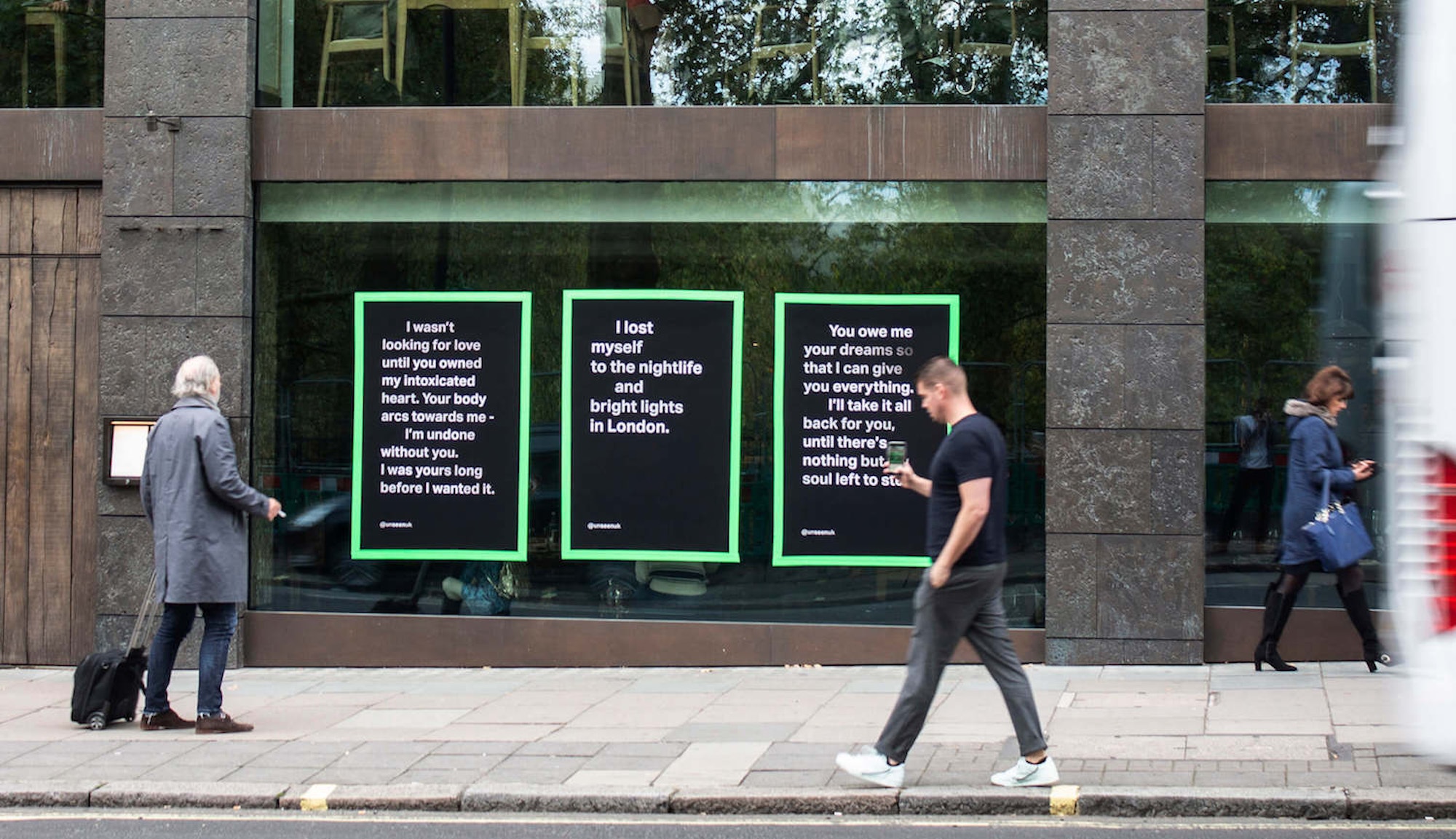 The posters at Hide Restaurant

Normally our research spans interviews and data analysis of both the brand and category competitors. This research is then funnelled into a narrative workshop, which we use as a session to isolate a brand’s problems, ambition and identity. This becomes the basis of the new ‘brand story’ which then informs our creative brief.

For this project, we interviewed the founders of Unseen and researched actual survivor case stories. But due to the size of our team and the urgency of the deadline, we leapt from problem to solution without the luxury of ordinary steps in between.

“The project was always intended to feel like an artistic installation rather than a campaign.”

Our intention was to create intrigue and buzz that would push people to Unseen’s social channels. The project was always intended to feel like an artistic installation rather than a campaign, therefore making it more shareable. Our objective was to not only drive donations, but also spark a social movement by encouraging people to turn their social profiles green for the Unseen – creating widespread awareness of the modern slavery crisis.

We were inspired by ‘Insta-poetry’ online that romanticises toxic relationships and escapist fantasies. There was something unsettling about the parallel between this kind of poetry and real-life stories of survivors.

A common theme that spans many of the survivor stories, is the idea of promise versus reality. Almost all victims come from dire circumstances, drawn in by the promise of a new life and a fresh start. Often lured in by an older boyfriend or loved one, even a family member, the reality that lies on the other side of that promise is brutal and heart-breaking.

Because of this, we wanted the #UnseenStories campaign to use carefully-considered design and creative storytelling based on these real stories to expose the lies told by those who prey on potential victims.

In order to illustrate this betrayal, we wrote a series of short stories that simultaneously show both sides of the same narrative: the romantic promise in longer form, and the reality in shorter form. The obvious parallels between these empty romantic promises and Insta-style Lana Del Rey-esque toxic-love poetry, felt like a natural creative starting point. These stanzas steeped in equal measures of romance and tragedy shaped our stories into the short form of poetry they have become.

Each story needed to change from abstract romanticised poetry to an unsettling reality. For example, “I lost myself to the nightlife and bright lights in London” changes into “I lost my life in London.” So we used a mix of lenticular and specially-built OOH [Out Of Home] adverts, coupled with a social campaign to drive traffic to Unseen channels, raise awareness for the crisis and raise funds to save the hotline.

We collaborated with 3D and lenticular specialists, Hive, light projection and social reach company, Okoru, type foundry Dalton Maag and marketing agency Jack Media. We bought our partners in as soon as we could to help form the idea through collaboration.

There was a huge amount of trust from the client. All problems were dealt with quickly and collaboratively which meant the whole process ran fairly smoothly from start to finish.

As mentioned earlier, our intention from the outset was to create a movement, not a campaign. We believe that the power of sharing comes from creating something of significant cultural interest rather than relying on forced guilt as a tool to drive home a message.

With the OOH prints, we knew that our concept relied on the double narrative and therefore required a medium that could display two states; digital OOH felt like it lacked the artistic tactility of an installation, which lead us naturally to build lenticular prints. They also linked back nicely to our social elements, which were simple animations that showed both the original and redacted states.

“We believe that the power of sharing comes from creating something of significant cultural interest.”

The biggest OOH challenge was the 48-sheet billboards, which were too large to be printed as lenticular. We needed a way to convey the two states of a poem on a large scale – we came up with the simple yet wildly effective solution of redacting the poems ourselves (by hand) with fluorescent green gaffer tape.

One of the biggest production challenges was recreating the fluorescent green in print. To achieve this, we custom screen-printed our six-sheet posters using Pantone 802 ink and used the fluorescent green gaffer tape to offset the black and white on our larger billboards. Alongside this, we projected our poetry onto buildings across Bristol on the evening of Anti-Slavery Day. 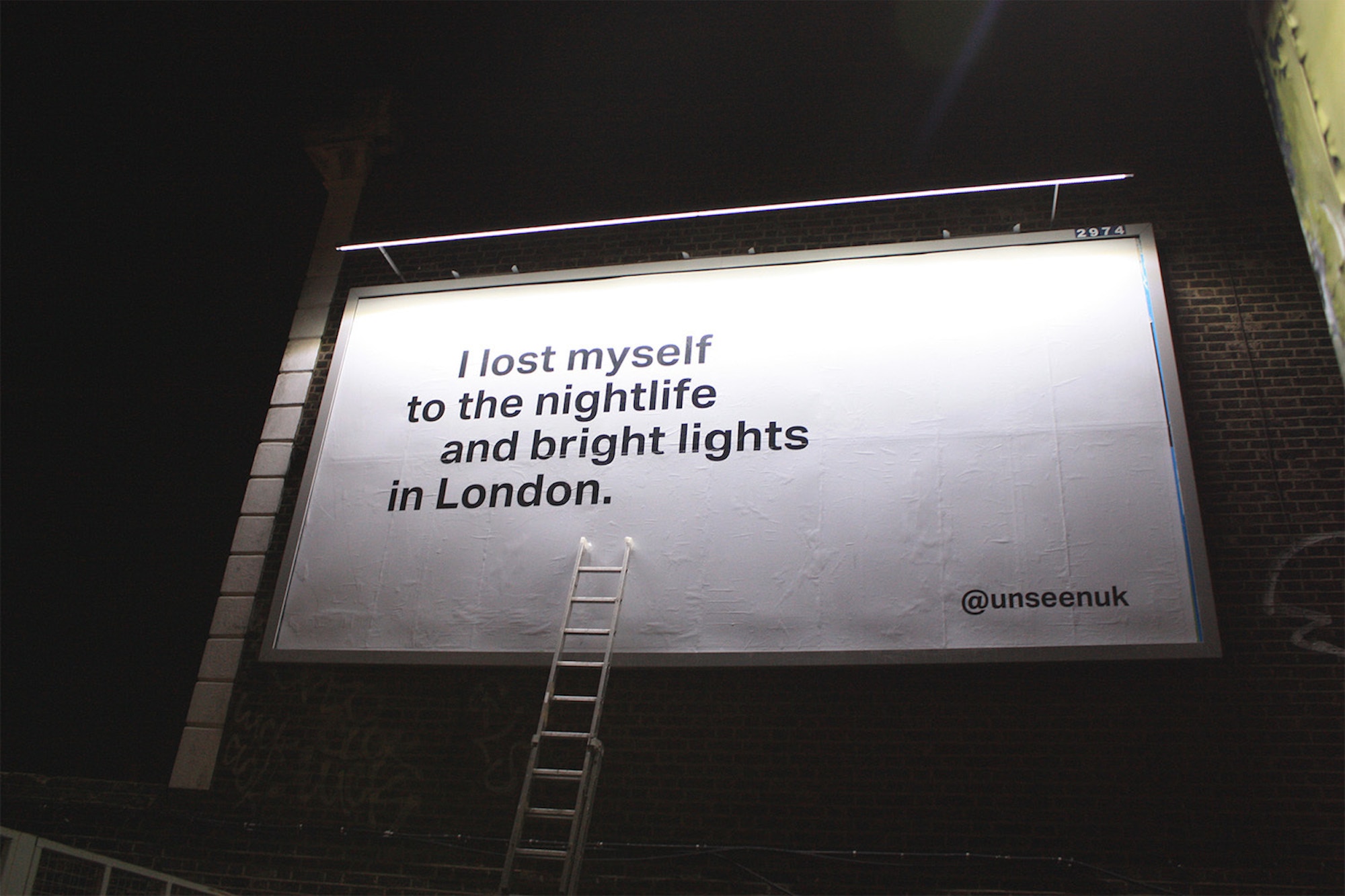 Preparing to alter the poems by hand 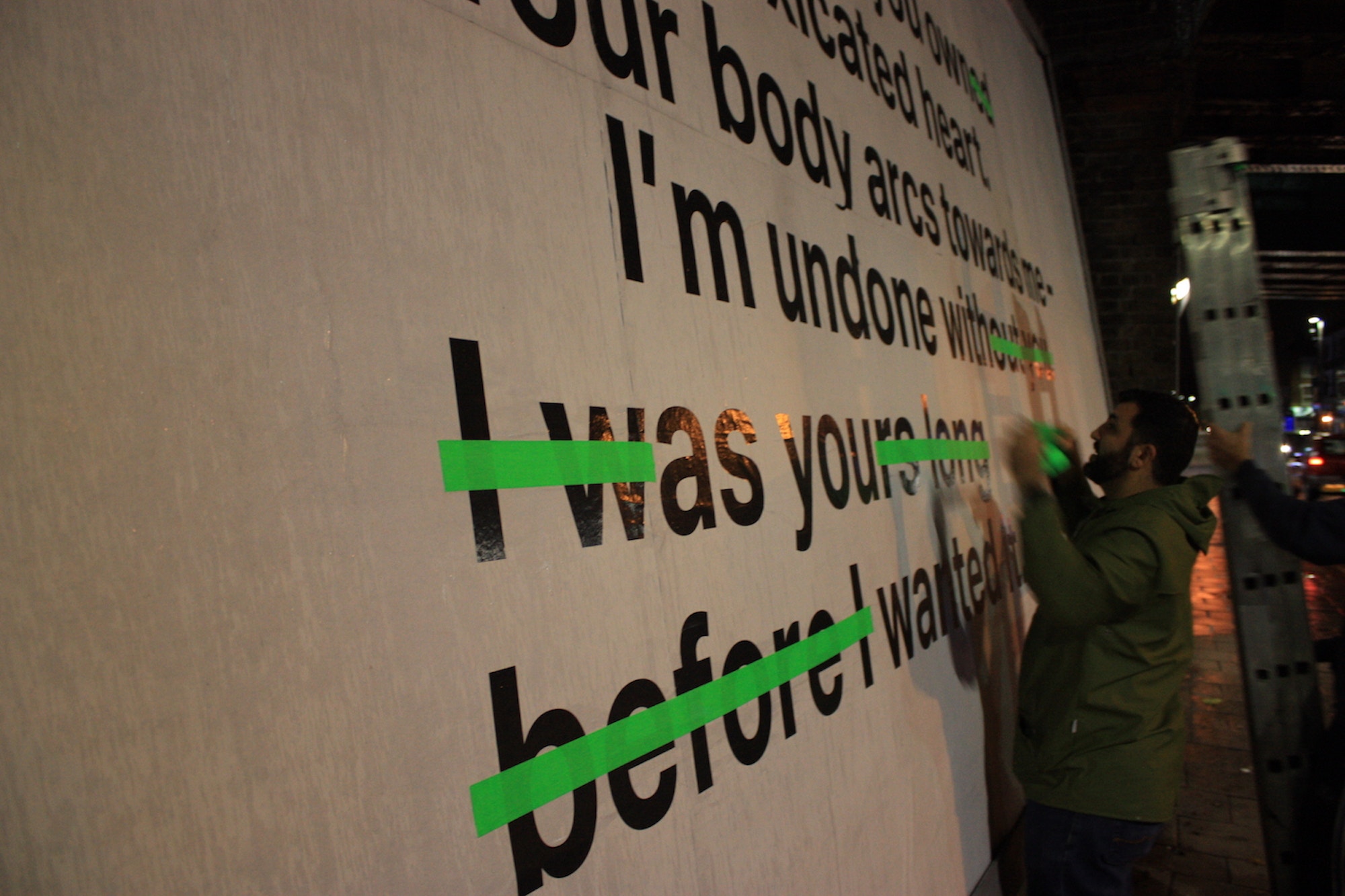 Altering the poems by hand with fluorescent green gaffer tape 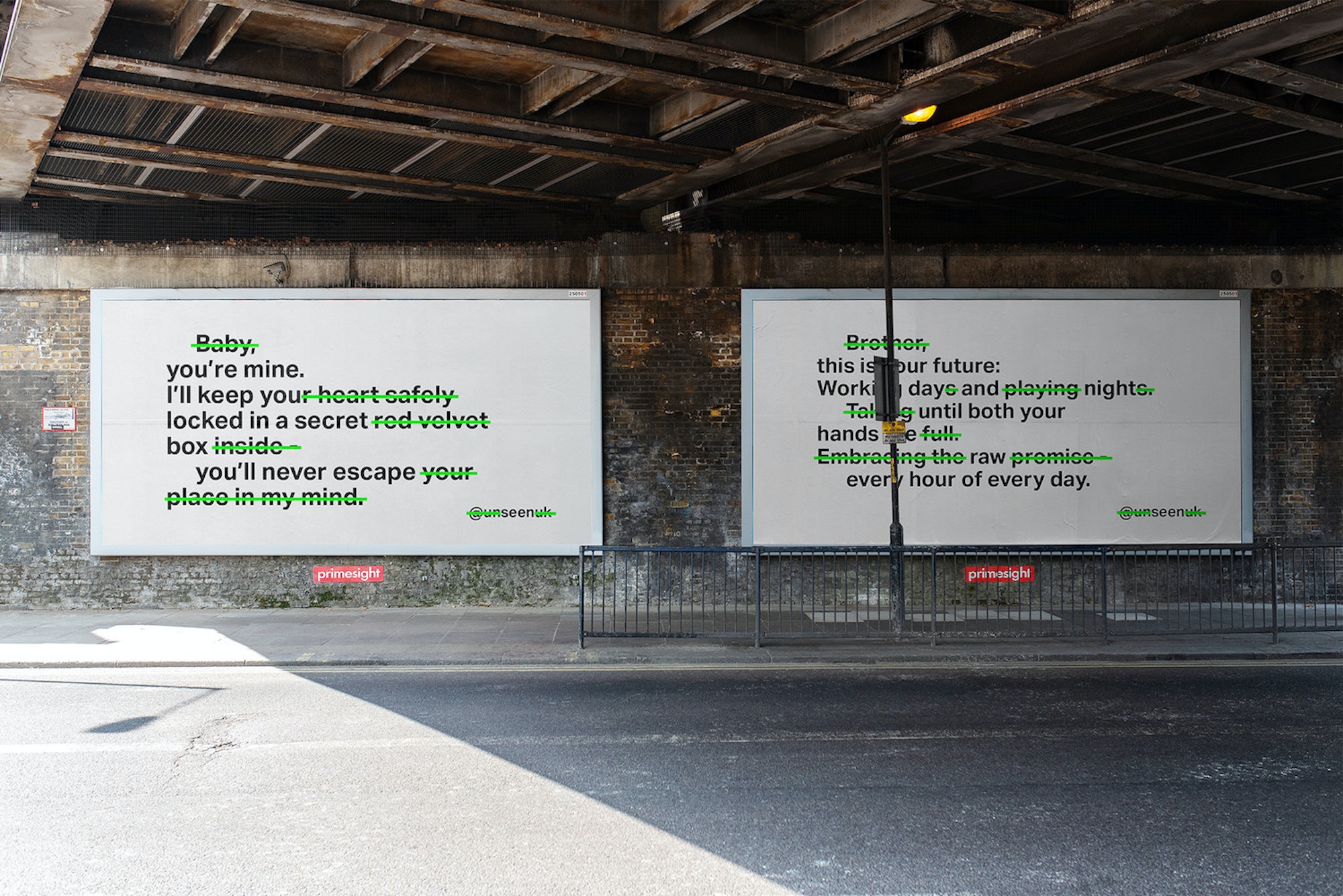 The billboards in action

The project took two weeks of creative development plus two weeks of execution and production We used lenticular production, screen printing, a lot of favours from Instagram influencers plus 10 rolls of green gaffer tape and the love of dizzying heights.

The end result was OOH, a building projection in Bristol, an installation at The Curtain [Hotel] in Shoreditch as well as social movement across Twitter and Instagram. It was a massive success in our opinion – there was a lot of media coverage, widespread awareness for Usneen UK, and the client was ecstatic.